Murly Manokharan has always been ambitious. At just 23 years of age, he was appointed as the youngest executive director to lead a Malaysian public company in history. By 26, he owned one of the nation’s most lucrative businesses. Murly credits his drive to his mother.

“The most important person in my life who has influenced the way I live is my mother,” he says. “From a young age, she has been the best role model. My mum instilled all the values I carry today. She’s number one.”

An architect by training, Murly says the property industry in Malaysia is “great and old”. “It’s an intense capital industry, where most of the properties are built for affluent regional people.”

After seven-and-a-half years at his former company, Murly noticed a gap in the market. He says no-one was looking at the middle space – a space that is filled with young educated people and those who are starting a family looking to buy a suitable property.

“This is the category I was in,” he explains. “I only had two choices. I was either going for the low-cost house, meaning I had to go with a company specialising in government social housing based on salary requirement. However, we did not conform to those guidelines. Otherwise, we were left with expensive properties that we couldn’t afford to buy. But, even if we could, we would have to spend more of our earnings paying for the mortgage.”

To him, it was evident that there was an urgent need for houses that catered to the middle market. Malaysia is a unique market. The country operates the same as the Westminster parliament system.

That’s when it occurred to him. “If I’m able to build properties in a prime area and sell at an affordable price to the middle-income group, I would be operating in a niche market,” he says. Soon after, the 26-year-old resigned and started Aspen Group. 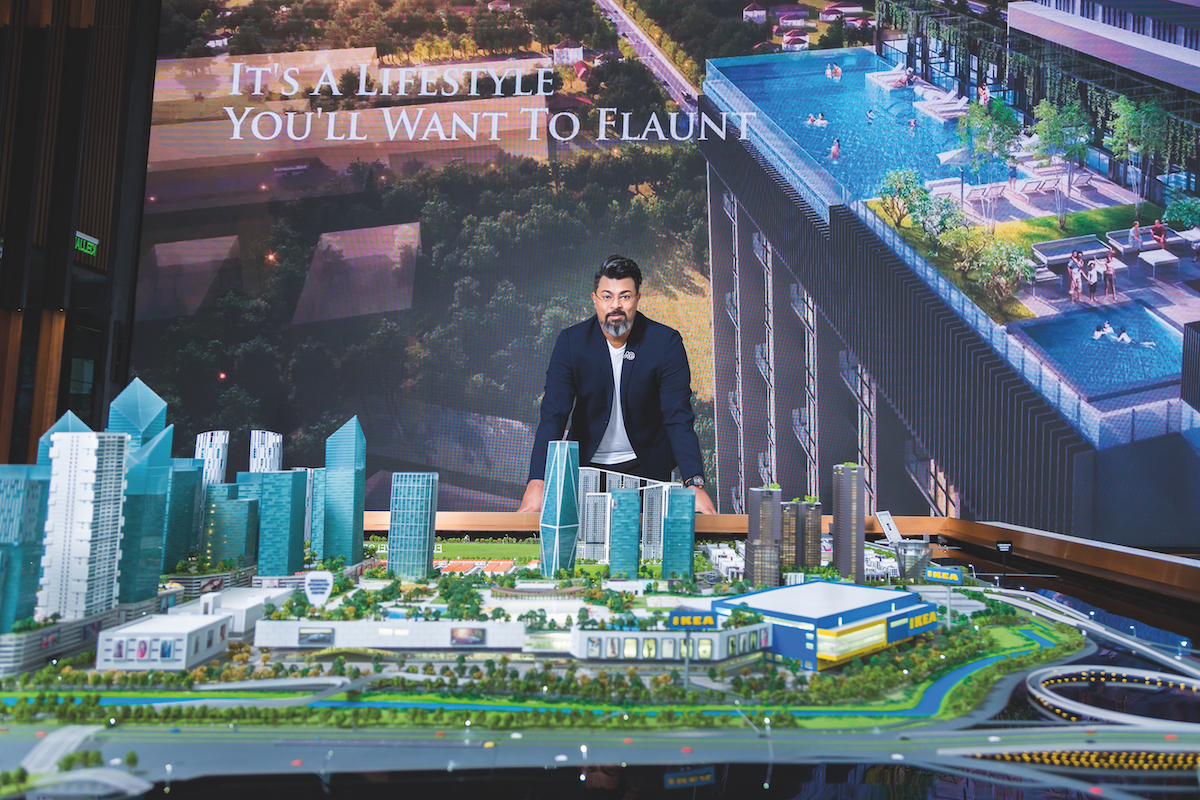 “There are many people with huge capital and money, but what they don’t have is an idea,” he says. “What they also don’t have is a business model that mitigates fundamental risks such as sales.”

The second part of the challenge was the cost and finding the right team. “People have to be seen as the best asset of any organisation,” Murly says.

“I started hiring co-workers who were like-minded. We were a small group back then with fewer than 20 people. I worked hard to get every little detail right. We were the only ones talking about affordable housing for the middle income.

Additionally, Aspen was receiving no interest from the private sector. “When we brought our ideas, people were receptive, but they looked at it from a sceptical angle. However, when I launched my first product, that’s when we created history by selling everything in a single day.”

Murly recalls having more than 40,000 people queuing outside the office as early as 4am. “It became news. Even the big players started to look at us,” he says. “Then we had government agencies asking: How do we do it? Why are we doing this? Now everybody is doing what we are doing.”

However, before the success, there were obstacles and a need to rethink. “We failed miserably in the first six months. I had to re-calibrate my business ideas and strategies. The intention, the objective, the vision remained the same,” Murly says.

“We re-calibrated, started buying private lands and splitting it into the vision I had. It’s proven to be successful because we do not have a problem selling the properties we built. We got the break-even sales in a day when we launched our product.”

Although the company is still young, it is no longer small. Murly confirms that people now recognise the company outside of Asia. He adds, “They know we are the only developer that has strong relationships and partnerships with big brands. One of our biggest achievements is being a sole partner for IKEA. There’s not one company or one brand that is as successful as IKEA. Our ability to form a partnership with IKEA raises eyebrows. That’s what makes our brand. Aspen Group is a brand that has to be seen.”

What makes Aspen different, Murly explains, is the company’s speed, focus on details and the people. “An organisation is nothing if you don’t have the right people,” he says. “We have an excellent business model anchored by people. I think that’s what puts us in a different position today.”

Malaysia is a multiracial country, with various indigenous cultures, different religions and a complex social fabric. Therefore, businesses cannot have a single policy or framework. Murly stresses that organisations need to have separate systems depending on where that person is in their career.

“I also spend time with the junior co-workers because this is where ideas get created. We use the young and fresh co-workers as our think tanks.” Murly also highlights that Aspen is not interested in anyone’s weakness, but only in people’s strengths. He says, “If you find an employee who is good at certain things, you send them for training to make them even better.”

One lesson he has learned over the years is that he has to work as an artist. “Being a chief executive of a young company is not easy. You need to learn how to run your business, what the strategies are, what your vision is, as well as what your objective is and how to communicate ideas to the external market. However, at the same time, I realised managing people is one of the most important lessons I had to learn,” he says.

“Managing people is like art. Everybody has different ways of looking at life. You can’t talk the same language with 10 different people. You must have different approaches and ways of communication, depending on the person.”

Murly says he has also come to realise that he’s in a position to make a significant difference in people’s lives. “Seeing people transforming from one role to a better role keeps me motivated. I want to be an entrepreneur who not only makes the business successful, but I also want to be someone who can make someone else successful as well.”

“I want to be an entrepreneur who not only makes the business successful, but I also want to be someone who can make someone else successful as well.”

Murly is a big reader – books, news, anything that can help him learn about the world and how people interact. He claims reading enabled him to see that many people fail to understand their likes and strengths.

“People tend to think that what they like and what they believe in is what they are good at,” he says. “Because of that, people fail. You are failing on things that you like. Then you have issues emotionally because you’re failing.”

He says people need to learn to separate the two things. “Focus on what you’re good at as your career and continue doing what you like as a hobby,” he advises. “I think that’s the key point to success.”

“Focus on what you’re good at as your career and continue doing what you like as a hobby. I think that’s the key point to success.”

When asked how he summarises his leadership style, Murly states, “I empower people.” Before the interview concludes, Murly says he has noticed that experience has become less relevant to most young graduates and entrepreneurs.

“It is important to understand that, if you spend enough time learning how to do business or how an industry or service works, then you start operating as an entrepreneur,” he says.

“You’ll focus on how to do better. However, if you have no experience or understanding of the industry or products when you start, you will waste your first year learning the ropes.”