Peter Ryder, CEO of property and financial services firm Indochina Capital, may never have ended up in Vietnam, had it not been for a fateful business proposition in late 1991. Yet the image he conjures of that moment seems almost more akin to the start of an Indiana Jones film than the first steps of successful entrepreneurship.

“I was sitting in my office in New York at Salomon Brothers, the investment bank,” he recalls. “I was literally within a day or two of leaving the place. I’d resigned a few months earlier to go off and start my own firm. I was staying just through the end of the year – I can’t even remember why.

“Anyway, my fax machine began to buzz and hum and whatnot, and it spat out an old tourist map of Saigon – Ho Chi Minh City. And on it was marked an ‘X’, with a line up to the border of the map, where it said, ‘Would you be interested in this site?’ That was really the last piece of the puzzle, if you will.”

Vietnam had sunk into Peter’s awareness long before, albeit from a vastly different angle. In 1969, when he was attending prep school in Boston, the anti-war movement was in full swing.

At the same time, his CBS-employed father had the station’s news on every night at 6.30pm, so the war was broadcast into his living room, courtesy of news anchor Walter Cronkite, “the most trusted man in America”.

At the age of 15, Peter found himself deeply invested in Vietnam, through a growing, ardent opposition to the war (while it’s known as the Vietnam War in America, it’s called the American War in Vietnam; Peter just calls it “the war”).

Having such an ingrained political–historical perspective, Peter’s move was about more than just the financial prospects; to this day, he has a “real interest” in seeing the South-East Asian nation succeed.

“There’s this hyper-entrepreneurial culture in vietnam.”

What’s more, his first step towards Vietnam in 1992 made him one of the country’s earliest American investors; it wasn’t until 1994 that US President Bill Clinton lifted the trade embargo, nearly two decades after communist forces prevailed in Saigon and reunified the war-torn nation.

However, Peter’s initial trip opened his eyes to the potential of Vietnam as an investor’s dream. He had spent a few years in Asia previously, in Tokyo, and hearing stories about South-East Asian growth, he was looking for ways to get back to Asia. Here, suddenly, was this chance to get in on the ground floor of an emerging economy, ripe with promise. 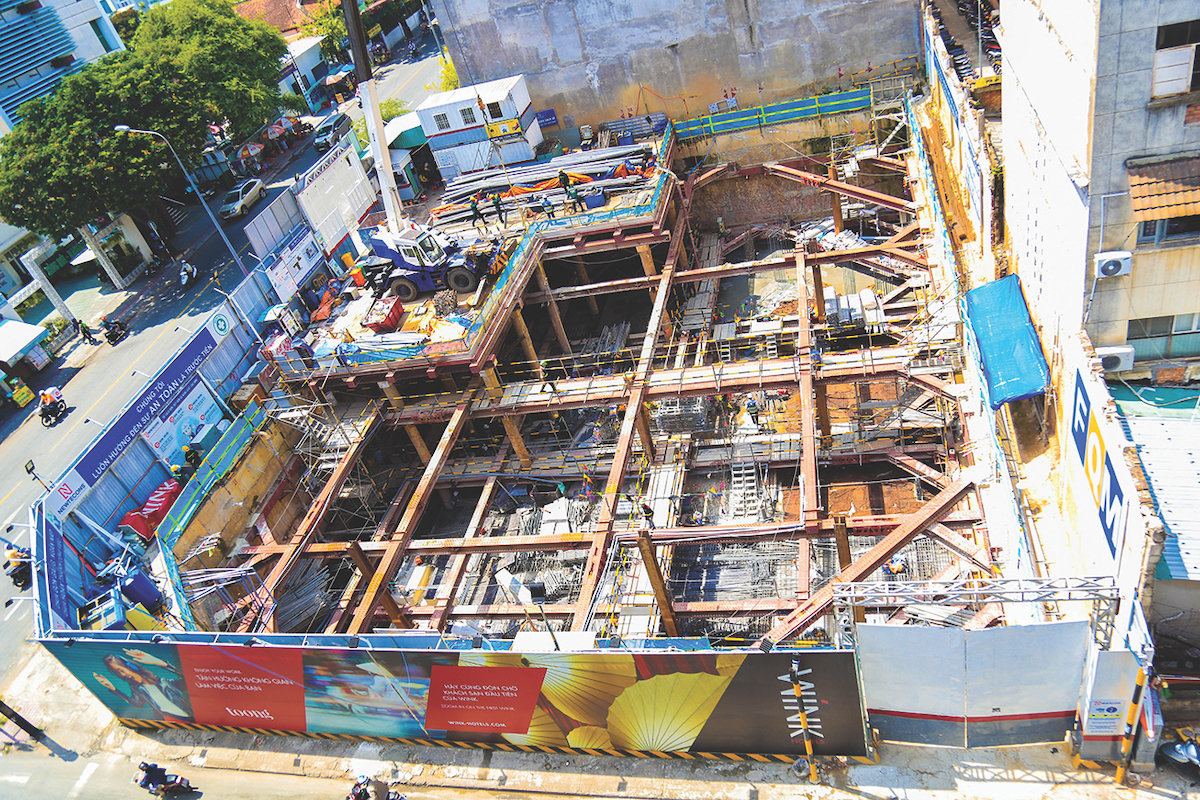 “After just a couple of days in Ho Chi Minh City, in January 1992, it was like a slap in the face,” he says. “The opportunity, the potential, just hit me and here I was in Vietnam, where I’d always wanted to go. There was an incredible amount of buying and selling going on. I mean, frenetic commercial activity. There’s this hyper-entrepreneurial culture in Vietnam. I said to myself, ‘If this is communism, then the world needs a whole lot more of it.’”

As a kid, Peter had thought he would always end up on Wall Street, having grown up in New York. But in high school and university, he “got hooked” on archaeology and anthropology – another similarity to Harrison Ford’s unorthodox archaeologist.

He spent several years in Central America (Costa Rica, Guatemala, Honduras) studying ancient Mayan civilisations. But even with fieldwork, scholarships, articles and awards under his belt, he began to grow dissatisfied with academic life.

“I was starting to get turned off by the politics of academia, which I can say 40 years later make corporate politics look like child’s play. It was a whole series of things that led me to wake up one morning and say, ‘You know what? I love this – the Indiana Jones aspects, the research, the teaching – but the politics, the need to spend every second of your spare time looking for money to fund your research, all adds up.’”

Peter says he was “incredibly lucky” to enter the world of investment banking in 1983, when Wall Street was coming out of a decade-plus-long slump. “The markets had started to boom and the banks were hiring. In those days, they were looking for anybody who could chew gum and walk at the same time.”

While that continued for some years, eventually Peter was ready to move on again and that’s when the life-changing opportunity in Vietnam came through. He spent the next few years operating across the domestic real estate, financial services and capital markets. But it wasn’t until 1999 that Indochina Capital itself was born, through a chance meeting with an old friend. 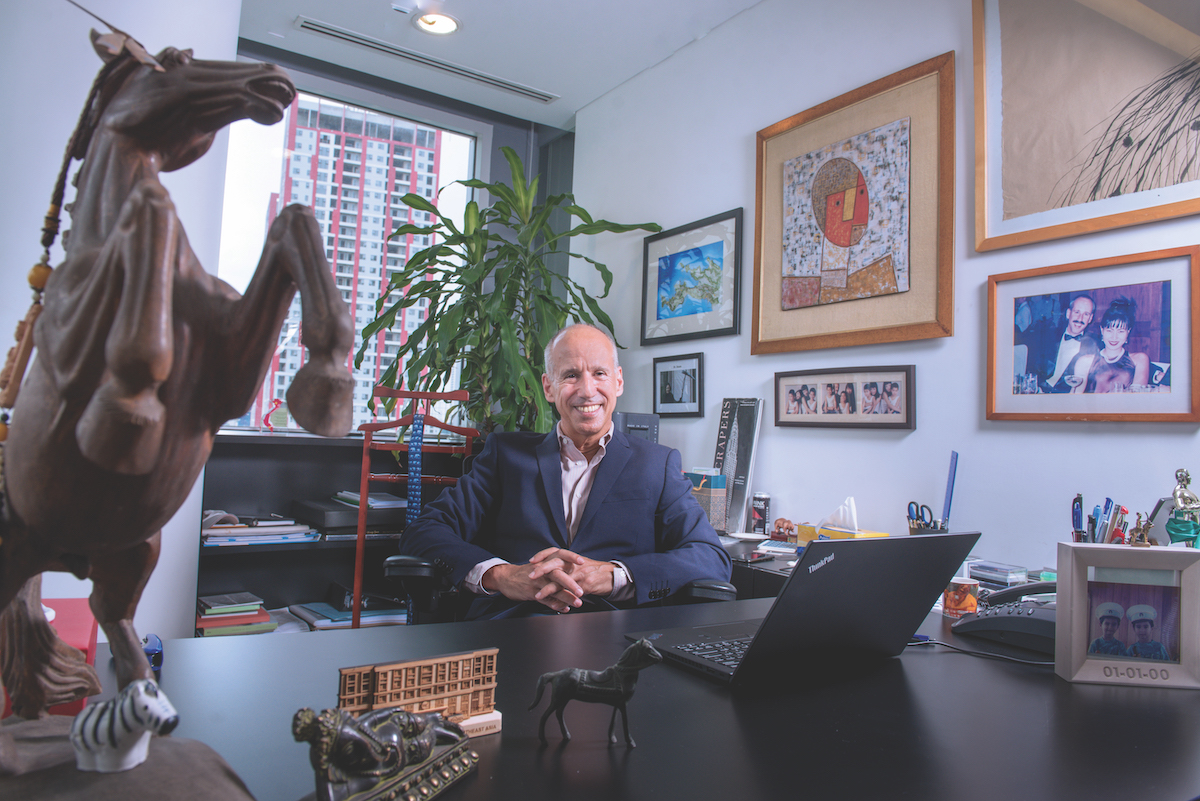 Fellow entrepreneur Rick Mayo-Smith had also been operating in Vietnam, having visited the country a few years before Peter. They met in Hong Kong in 1992, but it wasn’t their first encounter; the two had known each other since high school but only reconnected a few decades later.

The pair merged their businesses in 1999, bringing together numerous investments and developments in Hanoi and Ho Chi Minh City, together founding Indochina Capital. “Rick stepped down six, seven years ago,” Peter explains.

“We’re still extremely good friends – he spends about half his time in New York these days, and when I was back there last month, I spent a lot of time with him. We were a great team. We worked together smoothly for something like 15 years as partners. Even though we’re not doing anything specifically together, we continue to bounce ideas off each other.”

In those days, Peter recalls, there was a wealth of opportunity, but after 25 years of the country being open to US investment, the market environment has evolved enormously. “When I personally started to develop property in Vietnam,” he says, “there was the advantage of this aura surrounding a foreigner – our knowledge and ways of doing things in a more sophisticated manner. 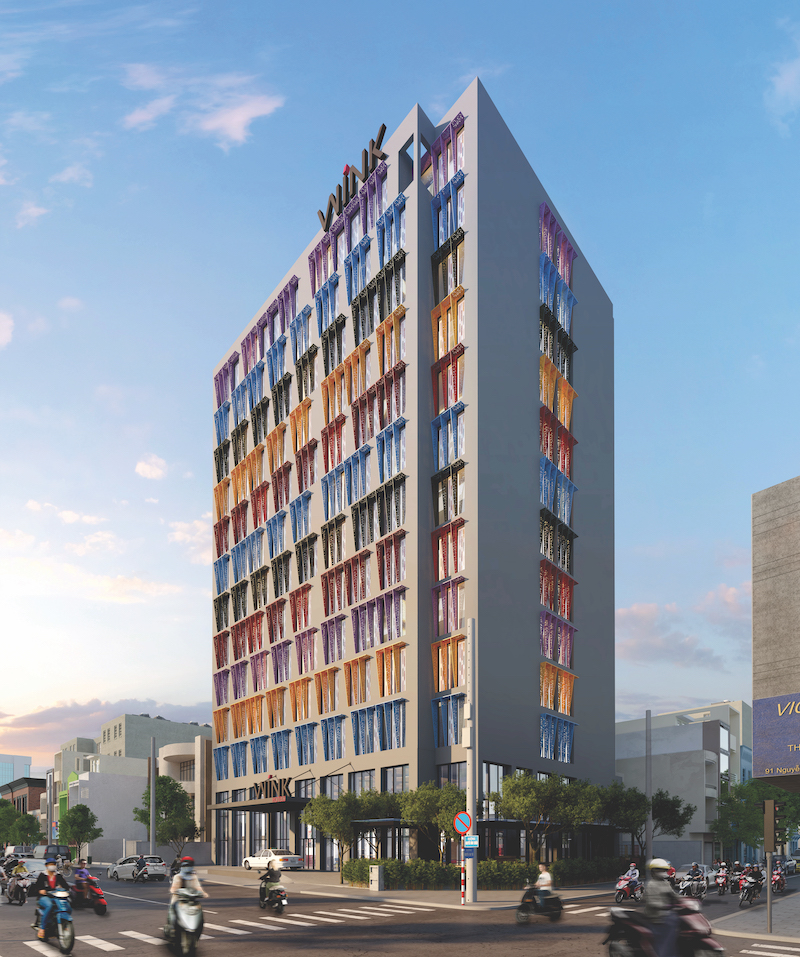 “There was very little in the way of domestic real estate development. Fast-forward 20 years to today, and the market is completely dominated by domestic developers, who’ve become exceedingly sophisticated,” Peter explains. “The opportunities are much fewer and farther between, even though the market itself is so robust.”

Today’s Vietnamese market is considerably more complex, no doubt due to the uptick in luxury property development; stylish, upmarket condos are increasing in price and a rapidly growing middle class is likely to create greater demand for property.

One result, says Peter, is that the approval process is much more difficult now; he describes it as a combination of the challenges of developing in New York, London, Los Angeles and Hong Kong, in terms of the number of approvals required.

Add to this a lack of transparency, and Indochina Capital has had to stay on its toes to adjust to the market. Though Peter sees Vietnam as challenging and competitive, it is still an exciting and opportunity-rich environment.

Peter says that an ongoing market boom has hit its fifth year, with sectors in and adjacent to hospitality doing particularly well, no doubt thanks to international tourists increasing threefold between 2010 and 2018.

Indochina Capital retains a strong foothold in this growth market, in spite of its comparatively small size. The company’s long track record and diverse experience lends it considerable prestige, along with its status as a market trendsetter.

“We have developed a portfolio of iconic properties,” says Peter. “Many of which, like Four Seasons Nam Hai, are known globally. We’re held in quite high esteem, which opens a lot of doors for us, even though we’re not the biggest, nor even the most prolific. Certainly, what we’ve done has left its mark in the community and the market.”

“What we’ve done has left its mark in the community and the market.”

This reputation has facilitated diverse partnerships throughout the industry; most importantly, a three-year-old partnership with Kajima Corporation, one of the largest, oldest and most prolific construction companies in Japan. The two companies created an offshoot called ICC-Kajima, through which they’re pushing forward on almost a dozen projects.

These projects include a new hotel chain called Wink, which Peter describes as “Vietnam’s first international standard hotel brand”, and relies on the contributions of other partners, such as French architectural company AW2.

“We’re very fortunate, particularly as it relates to Kajima,” he says. “The Kajima team that’s involved with us is absolutely first rate. I’ve known Kajima and individuals within the company going back 30 years, to my time with Salomon Brothers in Tokyo. We’ve had a long time to get to know one another. Sometimes
I’ll jokingly say, ‘It only took us 30 years to establish a partnership,’ though for the first 27 years we weren’t talking about establishing one. 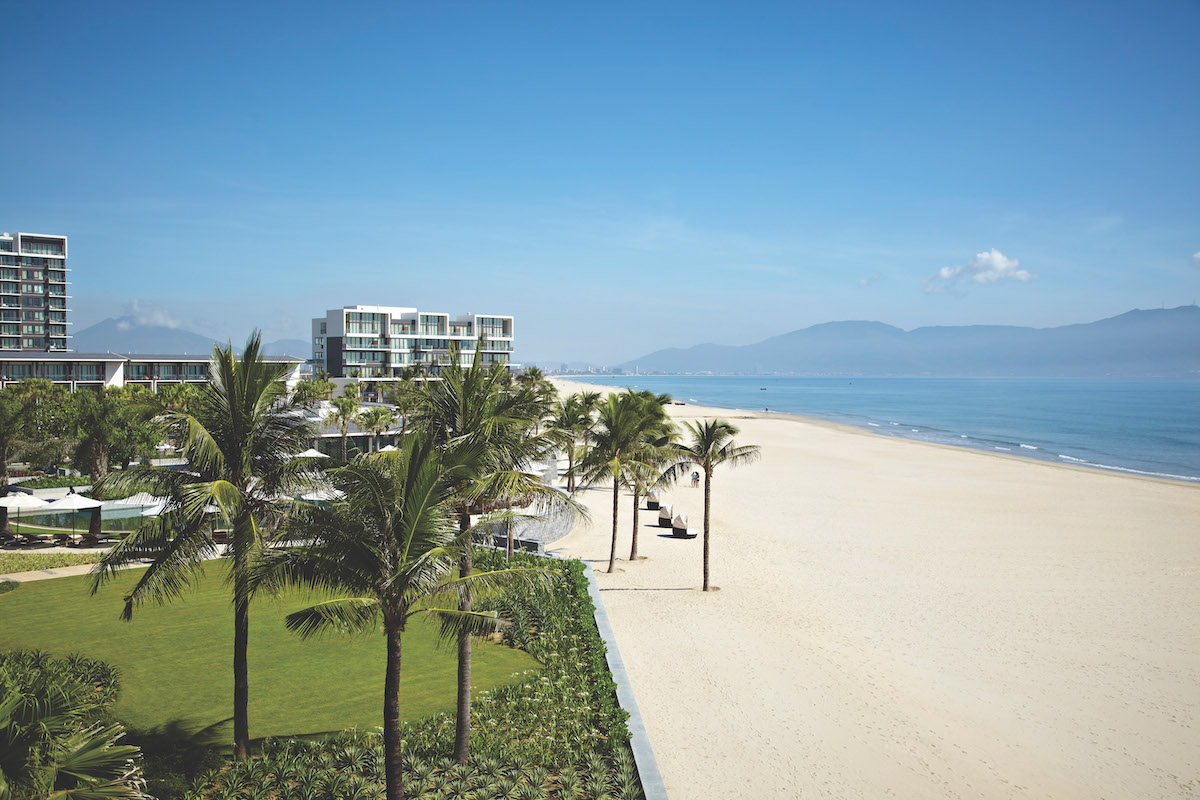 “But from my perspective, there are much more important factors to a relationship than what company it is or the size of the company. It’s individuals within that group, who we deal with on a regular, day-to-day basis, who we deal with at the board level. That’s what’s critical. If those relationships are working, then you’ve got a great partnership.

“Both we and Kajima take a long-term view. Even though we’ve always got the pedal to the metal, in terms of effort, we move on a step-by-step basis. In 10 years’ time, when people look back on what we’ve created, they will be very impressed.”

Perhaps some of the most crucial life lessons for the US-born entrepreneur come from his family. Just two weeks before he’d spoken to The CEO Magazine, Peter had scattered his mother’s ashes in the waters off Shelter Island, New York.

It was part of a memorial for her life and with the celebration fresh in his memory, Peter could look back on the contributions she’d made to his own viewpoint and how she influenced his career in Vietnam. “She instilled in me a real sense of adventure and the idea that the sky’s the limit,” Peter says.

“That has been the hallmark of my life and my various careers. I’ve made some 90-degree turns, on several occasions. I’ve always been someone with a sense of adventure and I’m always looking for a good challenge.

Indochina Capital’s culture is also characterised by extensive expertise and a real passion for the Vietnamese market. In December, this will be recognised with a big 20th-anniversary party for staff and alumni, but on a more individual level, the team’s capabilities are recognised each day by Peter himself.

The many Vietnamese employees – and even the foreign staff – exemplify that “hyper-entrepreneurial attitude” of Vietnam, the reason Peter has stayed there for so long.

“They’ve really inspired me with their dedication, their work ethic, their creativity, their integrity,” he says. “I feel blessed to have had such a great group of people working for me – with me. The beauty of it is that it now includes my two sons, who were born in Vietnam – they inspire me, too, their commitment and the way they fit in perfectly with the team.” 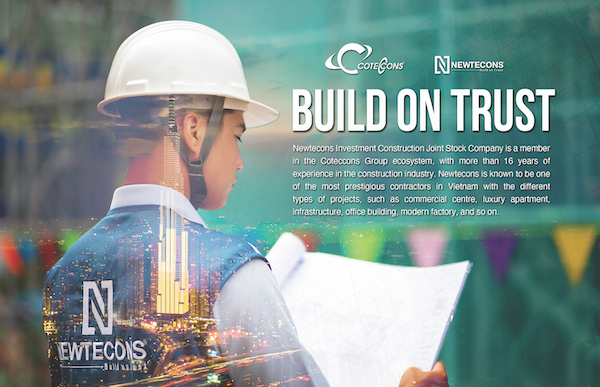