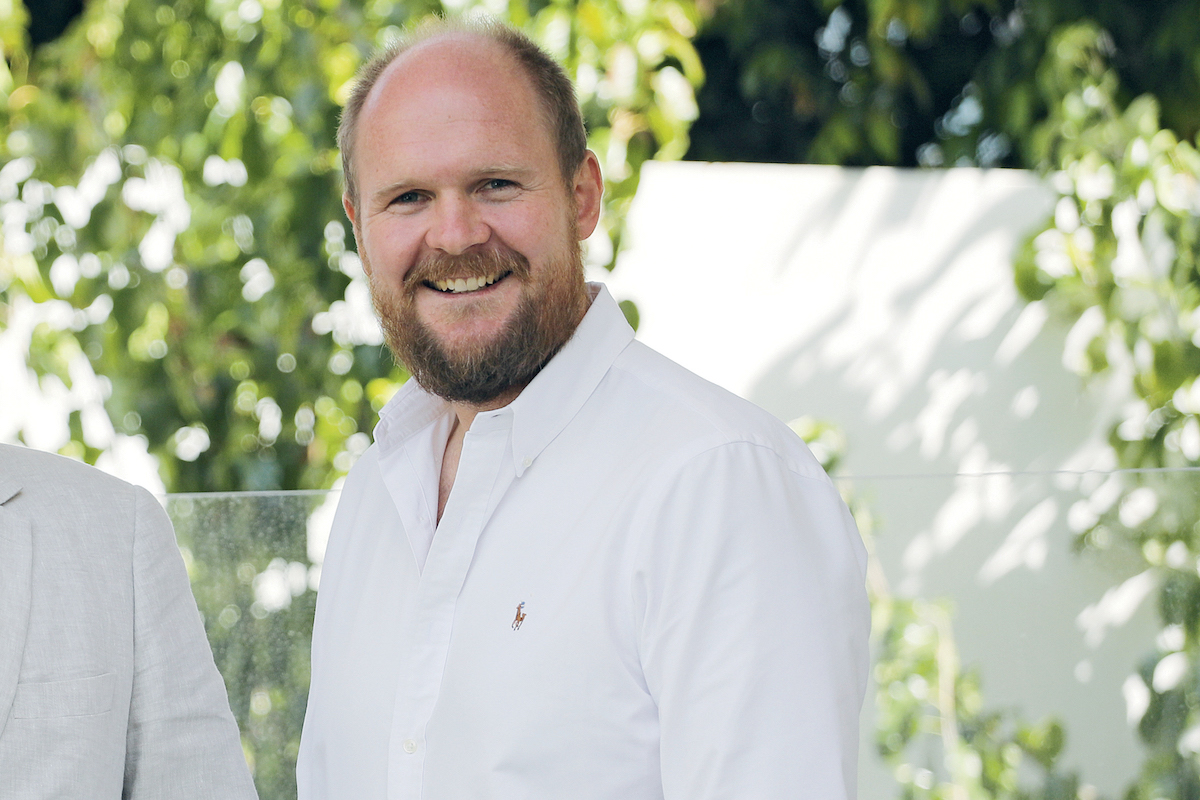 Hard work is the cornerstone of family-run housing construction company Simonds Group. Founded in 1949, this third-generation, ASX-listed company is an enduring brand with a reputation for quality and delivery. With a work ethic belying his age, 85-year-old patriarch and founder Gary Simonds is still involved in the business, watching proudly as his legacy pivots and adapts to the changing times.

And, under the careful watch of Joint CEOs and Managing Directors Rhett Simonds and Kelvin Ryan, Simonds Group is flourishing. An ASX-listed company, Simonds Group is one of the largest and most successful volume housing building construction companies in Australia.

“Young people coming into the residential building industry are able to come through Builders Academy Australia to upskill and become better tradespeople. We feel that we’re giving back to the industry by ultimately improving the skills of those who work in it.”

Rhett is the third generation of Simonds to work in the industry, proudly following in the footsteps of his grandfather Gary and father Mark. Owning your own home is the great Australian dream, and Gary believed in it. 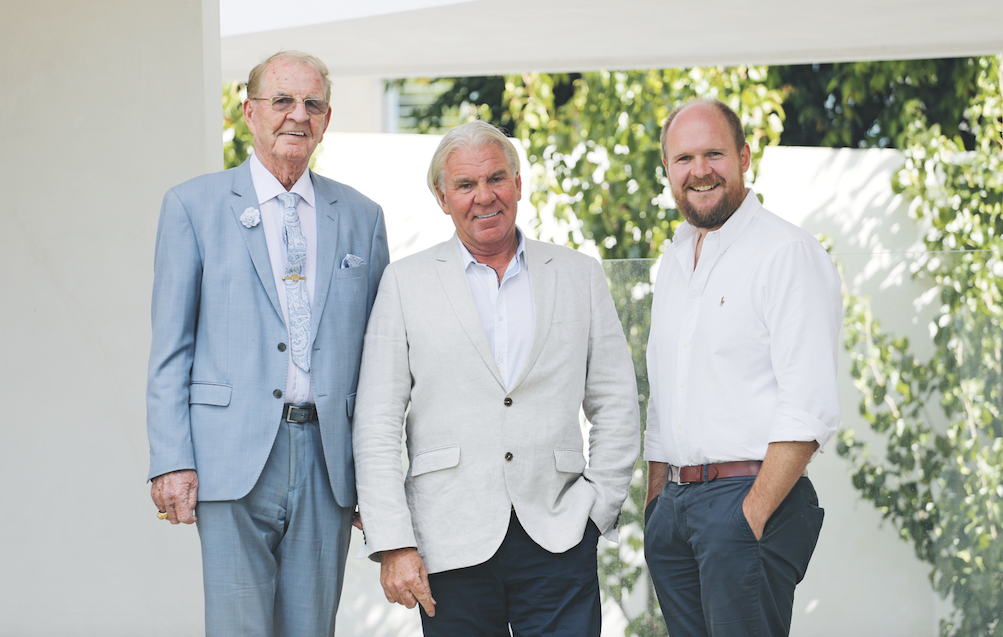 In 1949, he built his very first house – no surprise that, with his strong family values, it was a home for his mother. With tenacity and a reputation for doing the hard graft, Gary built Simonds Group up to the company it is today.

This unwavering work ethic is a quality he instilled in his son and grandson – he taught them how to be ‘good’ workers. Mark, Gary’s son, has been involved in the business from the beginning of his career in the 1970s; Gary would even take Mark to building sites when he was in his bassinet.

As soon as he was able, Mark started his carpentry apprenticeship, joining Simonds Housing in 1976. In 2002, while completing a commerce degree, Rhett began working alongside his father and grandfather in the business.

Gaining experience across the different departments within the company, Rhett learned the complexities of the sector from a business and sales perspective. “Those two individuals inspired me to follow the path into the building industry,” recalls Rhett fondly.

“They’re both carpenters by trade, so to be taught and mentored by two of the longest-serving individuals in the industry is very special. There’s no-one else who has been in the volume housing building construction industry for 70 years like my grandfather. The opportunity to work alongside my father and grandfather for the past 20 years – and progress through the ranks into the CEO role – has been fantastic.”

With three young children of his own, Rhett is hoping that the fourth generation of Simonds will also work in the family business. “Ultimately, they’ll be what they want to be,” he laughs.

The Simonds name has long been recognised for offering quality homes at an affordable price. As a three-generation-deep company with a 70-year legacy, it has shown it can stand the test of time. The company respects that clients are giving Simonds Group their life savings and their trust in the most important investment decision they’ll make.

And for Rhett, like his father Mark and grandfather Gary before him, this is something he will never take lightly. “It’s not just about the bottom line for us, although as a publicly listed company that remains important,” reflects Rhett.

“It’s about putting people in homes.” Like every industry, there have been challenges along the way, but the promise made to home owners and shareholders remains the same. “We’ve always stood for trust, integrity and moral obligation,” he continues.

“That’s just who we are as people. It excites us that our family is able to build a home for other families. That’s what we stand for. 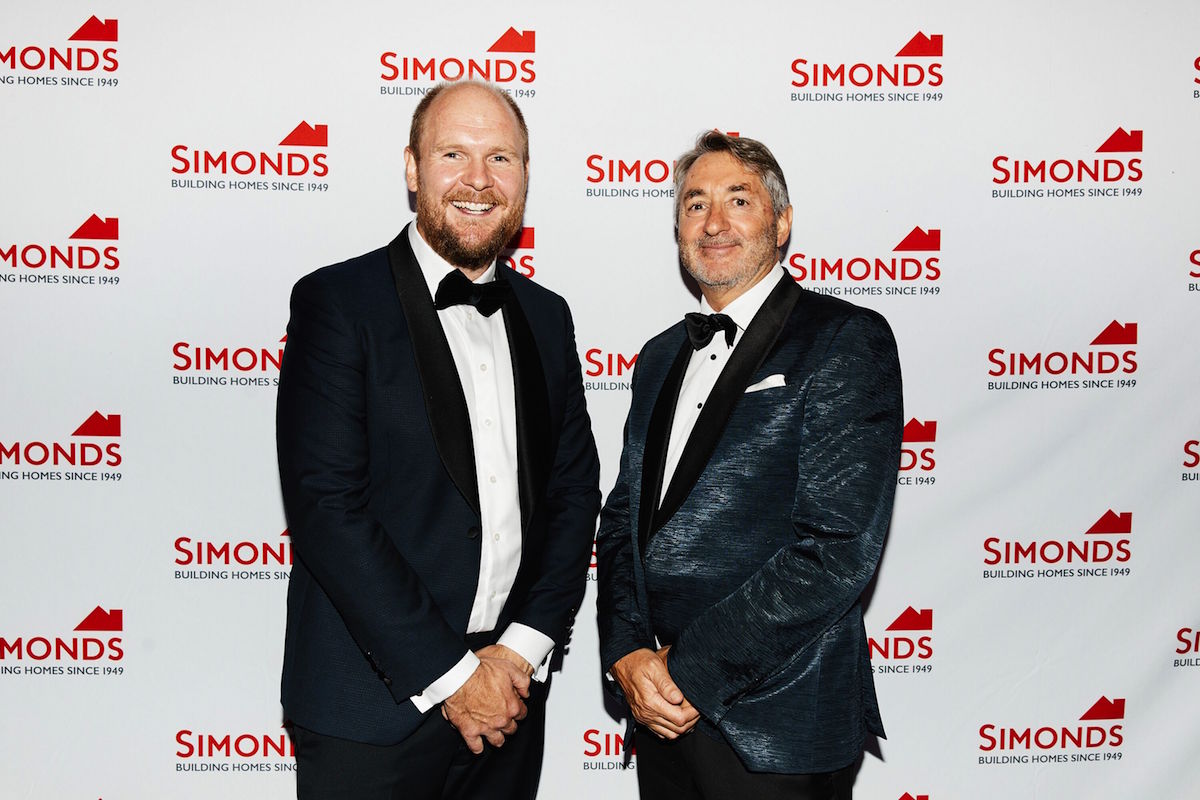 “We don’t want to be the biggest building company, nor the richest, but we do want to be the best. And, if you’re the best builder and you care for your staff and clientele, the rest will take care of itself.”

After hitting a few bumps following the IPO in 2014, the multi-award-winning Simonds Group has enjoyed steady growth in recent years. “Over the past few years, we’ve gone through a process of restructure. We’ve established a very competent board including a great joint CEO in Kelvin Ryan,” says Rhett.

“With more day-to-day involvement from the Simonds family, we’ve developed an executive leadership team that I think is one of the best in the industry. From a performance perspective, we’ve seen year-on-year growth in the past couple of years. Although it’s hard to predict the future based on the current environment, we’re certainly on the more positive side.”

The company has a steadfast belief in the quality of its construction processes, and is the first national residential volume home builder to offer a Lifetime Structural Guarantee on every Simonds home.

It’s also the first to be fully certified in Quality, Safety and Environment, achieving accreditation under AS 4801 Safety, ISO 9001 Quality and ISO 14001 Environment (July 2019).

“We’re known as Australia’s most awarded builders,” says Rhett proudly. “From an operational or a construction standpoint, there is no other volume builder out there that has won more industry awards than we have. We do pride ourselves on that.”

With the current environment throwing the construction industry and the economy a massive curveball, Rhett is characteristically upbeat. He sees the opportunity for the company to pivot and adapt, and he’s excited by this potential.

“I’ve always been optimistic about the future of the industry. I think the COVID-19 pandemic has fast-tracked it,” he suggests.

“What excites me is the potential for this industry to be revolutionised. It’s been sold and built the same way for decades. I think that we’re transitioning into a business that caters for a market in a more virtual landscape.

“Simonds Group pivoted from an operational perspective with more than 600 staff working from home. It also pivoted from our sales side, as we identified online and virtual avenues for homes to be sold. This period has opened our eyes to other ways to sell beyond the traditional display house and sales consultant approach.

“This is all green fields and probably years ahead of what we would have attempted,” adds Rhett. “But we’re going for it now. It’s exciting seeing the opportunity to revolutionise the industry through the use of IT technology. It’s not a massive mind-shift for younger first home buyers who already purchase regularly online. However, for those who are building their third or fourth home, and are an older demographic with potentially more budget, a tangible presence will always be required.” 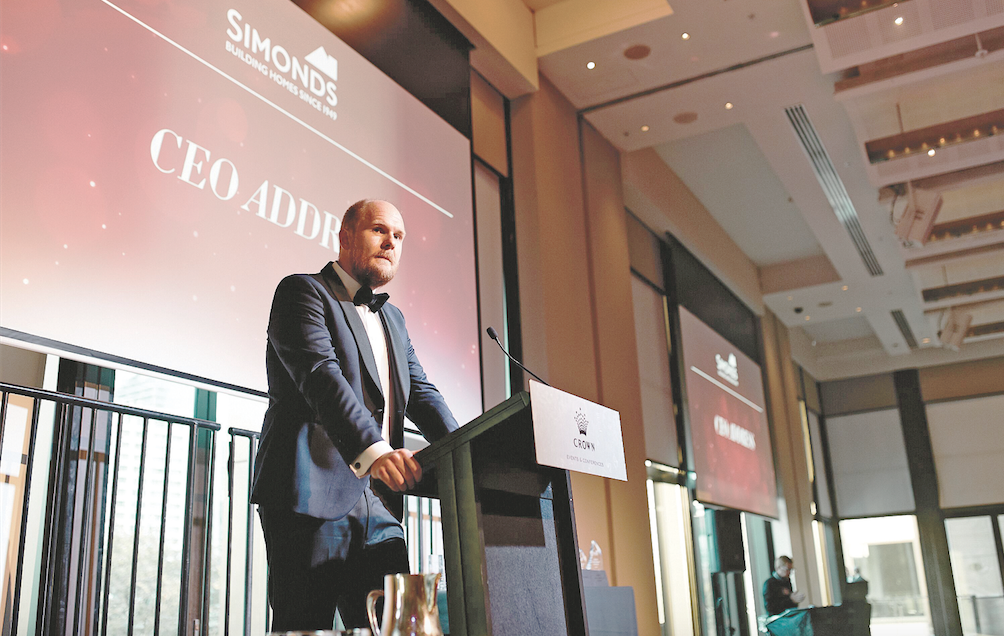 When asked about his grandfather’s and father’s thoughts on the new era the company is entering, Rhett is quick to respond. “They’re awesome. I’ve got an 85-year-old grandfather with an iPhone working with me, although I can’t say he’s amazing at using it all the time,” laughs Rhett. “As individuals and as a business, they know we need to move with the times.”

For Simonds Group, the commitment to family extends to supplier partners, and those they work with must share the same values and reflect the company’s commitment to sustainability, safety and people management practices. Simonds Homes are built with consideration of the environment, and Rhett and Kelvin want their partnerships to echo this.

“The most important three parts of our organisation are our customers, our staff and our suppliers,” notes Rhett. “We have longstanding partnerships with some of Australia’s largest building suppliers and manufacturers. We’ve had 20- and 30-year relationships with some of them, and great partnerships and friendships have been formed through this process through trust.”

For the team at Simonds Group, one of the most rewarding moments is handing over the keys to new home owners. Clients have entrusted the company with their most important investment. The responsibility to build a home rather than a house is deeply felt and respected.

“Seeing young first home buyers who’ve worked hard to put the finances together and are so excited – that’s probably where I get the biggest kick,” enthuses Rhett.

“They’ve now got a new home for a young family, or to start a family, or just to enjoy as a couple. It’s a real honour and a thrill.” And what inspires Rhett in his role?

“I love to challenge myself and be challenged. It may be leveraging an opportunity, overcoming problems or managing risks – I find the challenge rewarding. We’re building, on average, 2,500 houses a year, so it can represent a few headaches,” he chuckles. “But I love providing a service that is doing good and making people happy.”

When asked why the team at Simonds Group love coming to work each day, Rhett answers easily. “Everyone cares. As a board and management team, we care, and that filters through the organisation into the business,” he explains.

“We employ about 700 direct staff and 5–6,000 subcontractors. Everyone wants the best for our customers.” Rhett and Kelvin know how to get the best from the company’s employees. “I leave my ego at the door,” Rhett says.

“That’s my biggest strength. I don’t agree with autocratic lead-with-the-iron-fist style of management. Our job is to know a little bit about everything. Kelvin and I give our managers tons of autonomy because they’re the specialists in their relative spaces. We give them the tools to do their job, and we let them do it.

“There are not a lot of businesses that last this long – we’ve been around for 70 years and, hopefully, we’re going to be here for the next 70. So to be able to work alongside my grandfather and represent the family makes me tremendously proud.

“At the end of the day, it is our name on the door. We’re entrusted with people’s life savings and it’s important that we do the right thing throughout the process,” he adds. “My grandfather’s goal has always been to put ‘kids’ in homes, and we’re still doing that.” 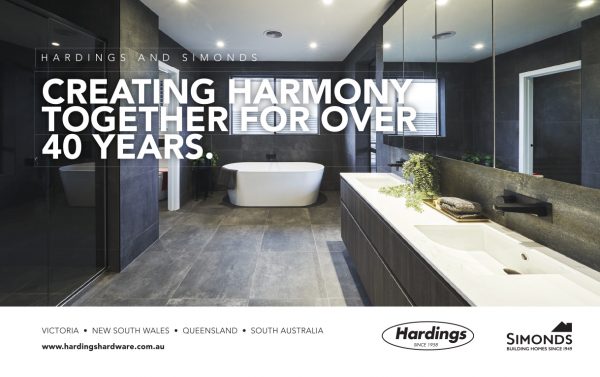 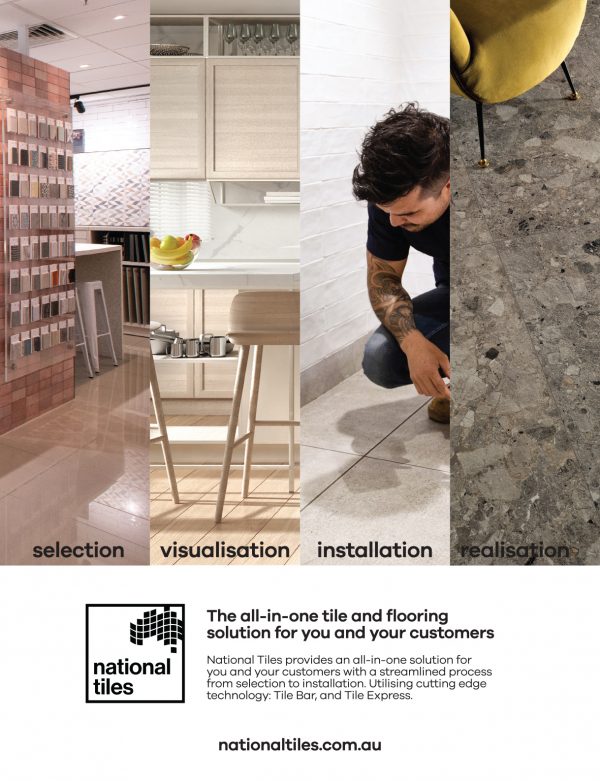 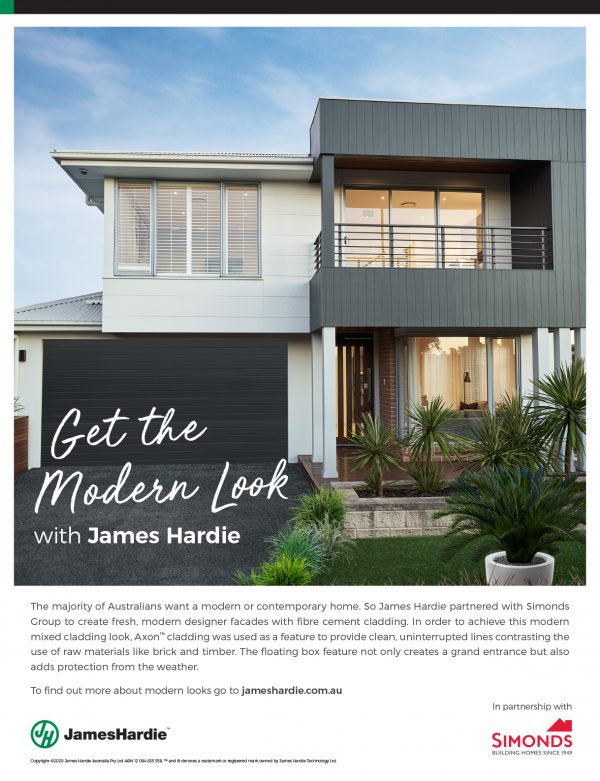