We Have To Be Very Flexible & Innovative: Sanjay Khandare Sanjay Khandare recently celebrated a year with the Maharashtra State Power Generation Company as its Chair and Managing Director, and in many ways, his career to date has made him the perfect person to take the government-owned energy supplier into the 22nd century. “I have had very varied experiences to date. I have worked in the environment department where I headed up the state pollution control board. And I have a great deal of experience in infrastructure. I also ran a company with financial, environmental and operational issues, and so I understand these issues well,” he says.

“Of course, human resources are the most important thing, as well as giving steady management. Even though it’s a government company, it can be professionally managed with the experience and expertise that I have gained.” Sanjay acknowledges that it is a challenging post in a challenging time for the power sector, but he is happy to take that on.

“There are a lot of things which can be done to prepare the organisation for the future, building on its strength to survive in these challenging and competitive times,” he says. “It’s a good opportunity for me to show that I can perform, and that we as an organisation can perform.” According to Sanjay, this means continuing to do what it’s been doing.

“We are the second-largest generation company in India, and also the largest state utility which produces power,” he shares. “We have a good mix of power sources, but now, most of our focus will be on renewable energy. We are currently at 73 per cent thermal production, but we would like to bring that down to around 60 per cent in the medium-term, and then further increase our renewable source of power.”

It is not an adversarial relationship between our suppliers and us. It’s not a zero sum game. If one wins, nobody wins – that is the slogan.

Delivering this change will require the retraining of staff, switching from expertise in thermal to solar and hydro power, although Sanjay is confident he has great human resources at his disposal.

There are, however, some operational efficiencies to be sought, Sanjay admits. “We have to build on our fuel supply agreements with various suppliers from the coal department. We are also planning for our own captive coal mines – we intend to start mining so that our dependence on coal subsidies gets reduced and we have more robust supplies.” The other issue that Sanjay faces is a financial one.

“Our working capital loan has increased substantially, so there has to be some loan restructuring, so that cost of capital comes down,” he explains. As Sanjay has pointed out, however, these three issues all fall within his skill set which spans financial, operational and environmental capabilities, putting him at an advantage. He is further buoyed by the fact that the company is already in a strong position.

“We have a robust and solid power mix – we are into thermal, hydro, solar, and we also have experience in gas power generation,” he states.

“So our expertise is very rounded and fundamentally strong. We also have highly skilled manpower to handle things. Not only in terms of the 25,000 people who help us to manage the process, but the company’s engineering and technical side is incredibly strong as well.” Sanjay believes the company can resolve any issue that arises. 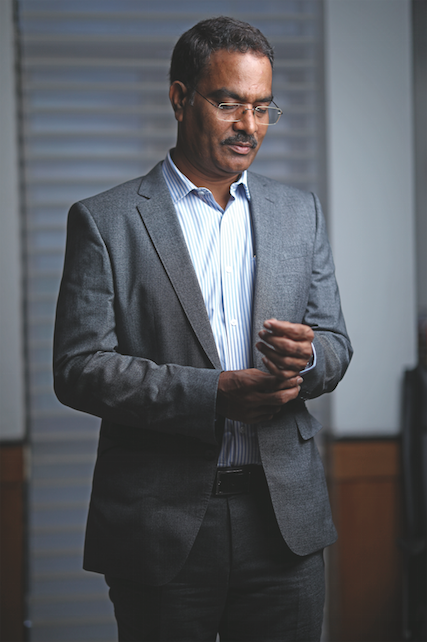 “We are very dynamic, although we can always be more so to face any challenges,” he says. “The power sector is actually a very dynamic sector – you have to be innovative, and that capacity is there within my organisation.”

When asked about his leadership style and managing his team within a large organisation, Sanjay reveals it’s about not reacting to things immediately. “I help people to open up to ideas and encourage a safer, collaborative team approach, and guide people in terms of their strategies and goals when necessary. This is my philosophy. I’m more of a team man.”

“It is an operation that involves both parties, so maintaining continuous communication helps us to keep our relationship healthy,” Sanjay expands. “This is also true with our component suppliers. We have a system where we categorise them as original equipment manufacturer suppliers, limited suppliers or open-tender suppliers, and we also have specific and transparent criteria. Since this is governmentowned, we have to have transparent processes.

“We also have a very robust SAP system. All our purchases and requisitions go through this system, and it’s linked to the supplier so it helps us both in a very professional way.” The benefit of having good supplier relationships and a strong SAP system goes both ways. Control of the company time lines is better, while pricing and lead times make it easier for suppliers to plan.

There are a lot of things that can be done to prepare the organisation for the future, building on its strength … and this is a good opportunity for me to show that I can perform, and that we as an organisation can perform.

“Since it is an open transparent system, suppliers get a fair pricing and a timely payment, which would be one of their concerns,” Sanjay says. “We are well known for paying on time. We also have a grievance redressal system and are open to listening to suppliers. I think it’s a win–win situation for everyone.

“Again, that is part of my managerial style; it is not an adversarial relationship between our suppliers and us. It is not a zero-sum game. If one wins, nobody wins – that is the slogan.” Sanjay and Maharashtra State Power Generation Company are in a great position at the moment, but many players are entering the dynamic power sector and, therefore, flexibility is needed to stay ahead of the game.

“Regulations keep coming, as well as lots of new players in the sector,” he reflects. “So, we have to remain fit on various fronts, leveraging our strengths and learning new techniques. We have to be flexible and innovative, and we have to continue operating efficiently.” With all this in mind and with Sanjay in charge, it appears the Maharashtra State Power Generation Company’s future is in safe hands.