Time is of the essence: Alvin Soon 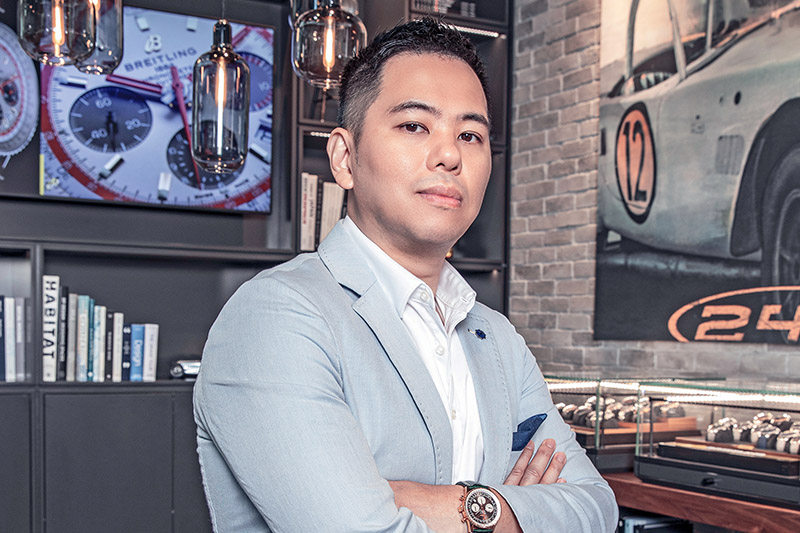 For nearly a century and a half, Breitling has been one of the biggest names in luxury watches, a goliath in sleek titanium and gold, renowned for its exceptional quality and timeless designs.

But not content with coasting on the coat-tails of its already established reputation, in recent years, the team behind Breitling has embarked on a quest to revamp the brand’s image – determined to appeal to a new discerning demographic, more interested in hipster chic than old-school glamour.

Breitling assembled a star-studded team of impossibly stylish and immensely talented actors and athletes who oozed effortless cool – its ‘squad’. From the Cinema Squad with Brad Pitt, Adam Driver and Charlize Theron to the Surfer Squad with Kelly Slater, Sally Fitzgibbons and Stephanie Gilmore, Breitling cleverly tapped into diverse pockets of society and consumers.

“People, especially millennials, want to be part of a squad – to have strength in numbers,” explains Alvin Soon, President of Greater China and SouthEast Asia. “And these personalities, who are all world leaders in their domains, give us the ability to talk to these different groups of potential customers.”

With more than 18 ambassadors across the globe from a range of fields, even encompassing Michelinstarred chefs and triathletes, Breitling is now shifting the assumption that luxury equals unattainability.

Instead, it wants to “represent inclusive luxury”. “We need to be diversifying our offerings,” Alvin says. “So we’ve really refreshed the entire portfolio since I started. If you walk into a Breitling store now, 95% of the watches are new designs. Plus, the whole Breitling Boutique atmosphere has been transformed. It’s an experience. We have a pool table and you can sit at the watch bar with Champagne or a cocktail and try pieces on at the same time.”

Breitling is constantly working towards achieving the perfect balance; straddling the fine line between innovation and tradition, always sure not to lose sight of its core principles and rich history.

Swiss watchmaker Léon Breitling’s eponymous brand originally focused on chronographs when it was founded in 1884. However, it wasn’t long before the company expanded its size and range.

When Alvin was offered the position of Managing Director of South-East Asia in 2015, he brought with him a wealth of knowledge garnered from his time in both the watch and jewellery industry and in IT.

From his formative years with fashion giant LVMH and one of the biggest names in the watch industry, TAG Heuer, Alvin worked his way up to Brand Director. He then joined Nokia as Head of Branded Retail, South-East Asia in 2010 before spending a year in Singapore with Samsung, and finally became Retail and Consumer Marketing Director of Asia Pacific for Lenovo.

So much of what we do comes back to our story – what we stand for, our values and what people see us bringing to the table.

Today, as the President of Breitling for Greater China and South-East Asia, Alvin has found his sweet spot – a role where he is able to truly utilise his skills and impressive experience.

“When I joined Breitling, in China particularly, we were nothing – we had nine stores,” Alvin says. “Today, just two-and-a-half years since I took over, we already have 44 points of sale and this year we’ll have 80. Our target is 100 within three years. We’re very strong in the US, France and Germany, but in Asia, we’re still a smaller name. So my mission is to make Breitling a powerhouse here as well.”

In 2018, the brand announced a partnership with Ocean Conservancy, which saw the organisations work together through joint initiatives and rubbishclearing events at beaches in a bid to “move towards being a really sustainable organisation as a whole”.

“As well as our significant work with Ocean Conservancy, over the next few years we’re looking to change all watch boxes to being recyclable,” Alvin explains. “We’re increasingly using sustainable fabrics, and we’re also ensuring that everything will be digitalised into one simple credit card format using blockchain technology, so that we can go paperless.”

For Breitling, it has never been just about watches, or profits. Rather, the company favours a holistic approach to business, putting people first and prioritising an involvement in supporting the wider community.

“We’re very interested in value creations – create something that is unique and that the consumer finds interesting at the same time as helping the environment,” Alvin says. “So much of what we do comes back to our story – what we stand for, our values and what people see us bringing to the table.”