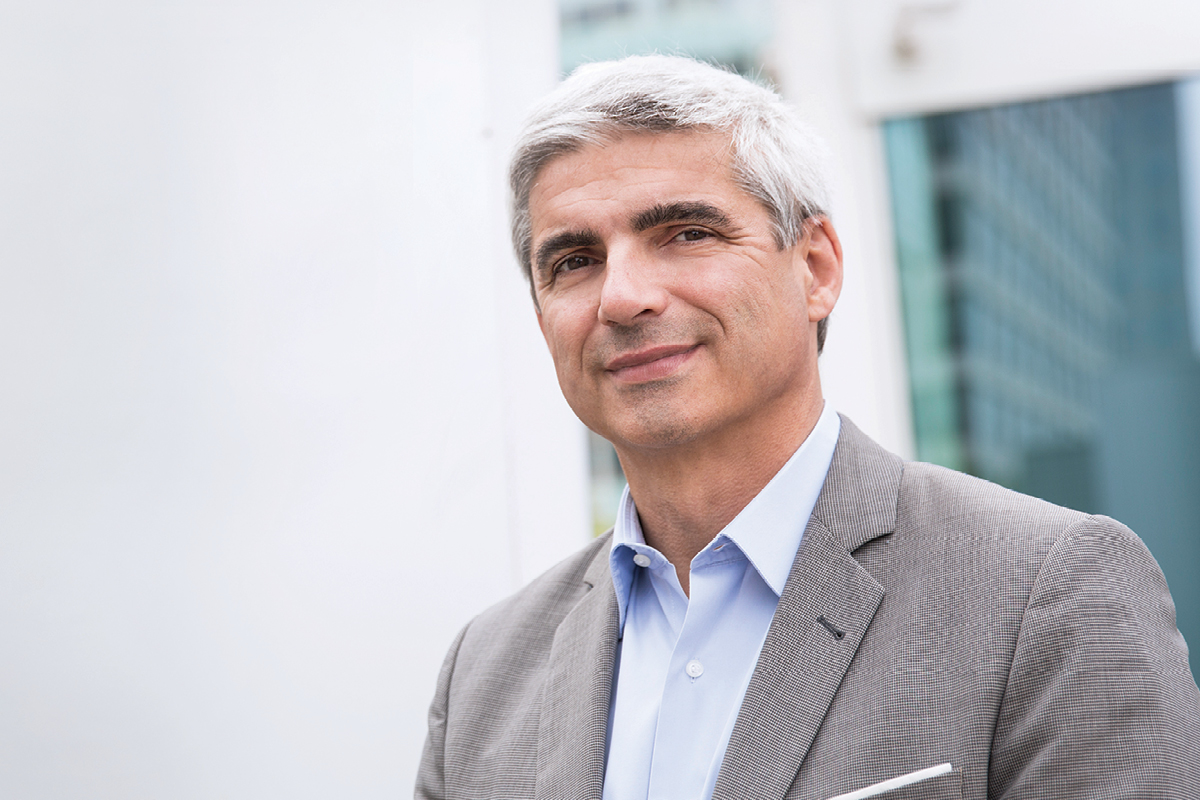 The rise of digital commerce has taken a toll on the traditional retail industry. Amazon, the most well-known digital retailer, continues to dominate the industry globally, while older, established retail companies like Walmart are trying to survive the upheaval by moving into the digital space themselves.

Of course, when old companies try to learn new tricks, there can be a danger of overextending or taking risks on unproven trends. Guy Colleau, CEO of Benelux-based retailer Maxeda DIY Group, is careful to strike a balance between investment in ecommerce and support of traditional, brick-and-mortar retail.

“We see some companies now are really moving into digital retail and putting all their resources into it,” Guy says. “But at the same time, they’re investing in a very unprofitable business while they’re losing market share in a profitable one. You need to find the right trade-off between being a physical store retailer and investing in digital, because this is how customers are shopping more and more.”

And while Guy is aware that digital retail is a growing sector that his business can’t ignore, he is equally committed to preserving the company’s origins as a bricks-and-mortar retailer. He recognises that although companies must invest in new ideas and integrate them into their capabilities, there needs to be balance rather than total transformation. “I am not opposing the digital or the physical,” Guy says. “Instead, I try to incorporate the best of both.”

“I am not opposing the digital or the physical. Instead, I try to incorporate the best of both.”

With much of his career dedicated to DIY retail, Guy has seen a great deal of changes impact the industry. He’s come from big industry groups in France, such as Leroy Merlin France, and Castorama France, of which he was CEO from 2006 to 2013. He then managed international operations for British retailer Kingfisher, which operates more than 1,000 stores in 11 countries across Europe and Asia, including the UK, Russia, and France. 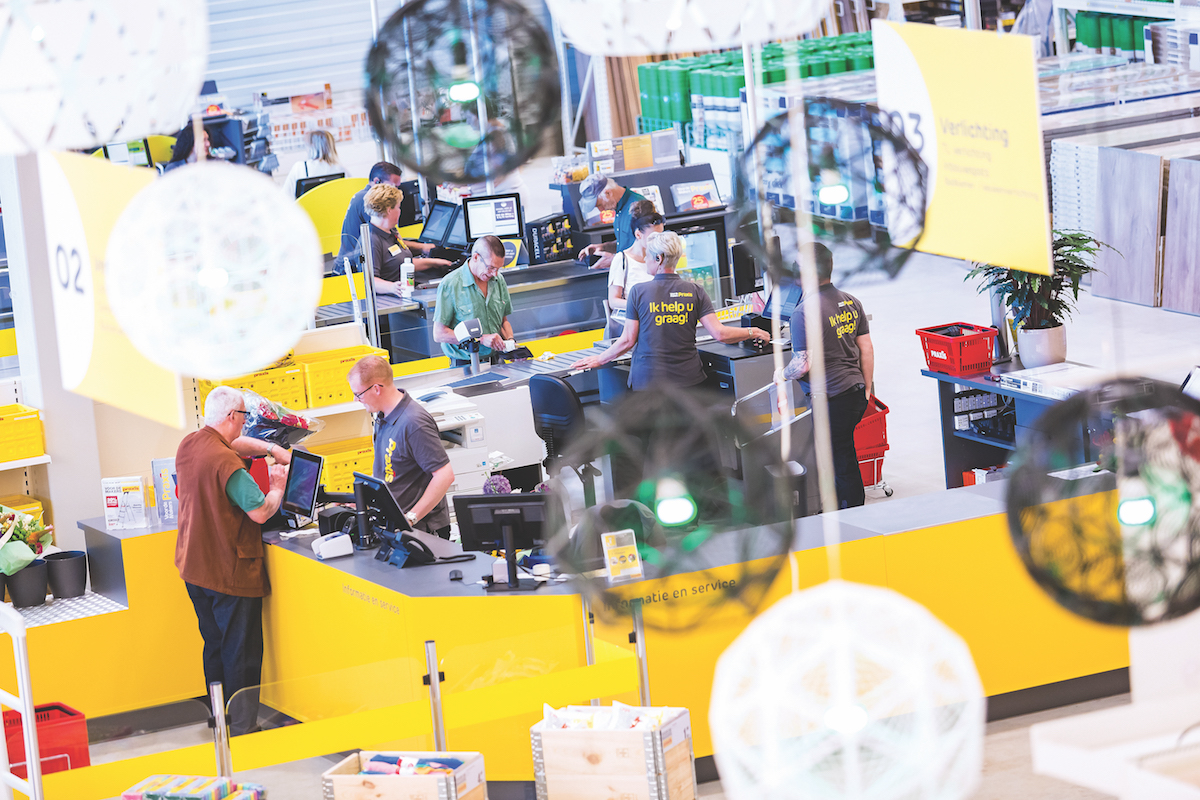 Moving to Maxeda in 2016, therefore, represented for Guy both a change of pace and a geographical shift to the economic region of Belgium, Luxembourg, and the Netherlands. The kind of chains he’d previously worked with had operated larger stores, sometimes more than a hectare in size. Maxeda runs smaller stores, sometimes no more than 2,000 square metres. Guy recognised that this move promised a learning experience. But more than this, Maxeda was searching for a new strategic direction, which Guy was all too keen to identify.

“For me, it was about discovering a new challenge,” he explains. “At that moment, the company was asking a lot of questions about what could be the best strategy. In the retail industry and especially at Maxeda, there are a lot of questions to be answered on how to prepare for the future and get the company into a good position to go through this new period.”

Once he’d started at Maxeda, Guy and the other senior management staff enjoyed rapid growth and early success. Guy’s initial strategic plan saw an increase in annual sales to €1.355 billion. The group has continued to perform well under Guy’s leadership, with Maxeda reporting a threefold increase in net profits at the end of the last financial year, hitting €24 million.

Maxeda DIY Group is the leader in the Benelux DIY retail market. The company boasts:

The strategy Guy espouses comprises two central tenets – focus and flexibility. “Focus,” he says, “is necessary to make a real choice about the way you are running your company – the key areas you want to invest in, the areas you need to stop exploring – to ensure that all your people are dedicated to your real target.

“The second point is flexibility,” he continues. “When the company is growing, you develop a large system and organisation, and you lose a lot of flexibility – the ability to make decisions quickly, the ability to introduce innovation, the ability to change your view completely on certain topics because you decide that existing solutions are no longer relevant. It’s about flexibility on ideas, on concepts, on principles – how you can reassess your decisions.”

These ideals stem from a trend of simplification within Maxeda that’s been in place for a little more than a decade. From 2006 to 2011, the retailer gradually divested itself of many of its chains, including those in such sectors as clothing, restaurants, department stores, electronics and jewellery. Because it’s no longer so spread out across multiple sectors, Maxeda has regained some of its flexibility.

Simultaneously, Maxeda has become a purely DIY-focused group, allowing the company to better service its DIY customers. Indeed, the customer experience is a key focal point of Guy’s operations. He’s driven to ensure that customers can perceive how Maxeda is continuously improving their experiences. He employs a comprehensive strategy of enhancement for the retail group, emphasising the quality of its merchandising and the availability of its products. Maxeda also aims to continually improve its team, raising the bar of quality, skills, and expertise of the staff across the group’s stores and trading sites. Ultimately, all employees should have the capability and knowledge to advise and serve customers.

Meanwhile, Maxeda continues to narrow and refine its focus. Since consolidating its portfolio in 2011, the group has operated four chains within the Benelux countries – Praxis and Formido in the Netherlands and BricoPlanit in Belgium. (Brico also operates stores in Luxembourg.) However, Maxeda has decided to consolidate further, combining its chains in the Netherlands.

“We’ve decided to close Formido,” Guy explains. “We will incorporate some of the stores that were running this brand into the Praxis network, which means that we’re refurbishing each store. We’re not talking about increasing the space – just about implementing the Praxis brand. However, the move will also mean more density, better merchandising, and a better variety of product.”

“Real retail is a trade-off between choice and accessibility.”

As further evidence of Guy’s commitment to customer experience, Maxeda’s stores have undergone numerous innovations over the years. In 2016, some of the DIY chains introduced self-serve check-outs as well as in-depth customer services, such as workshops focusing on specific subjects including painting and electronics. 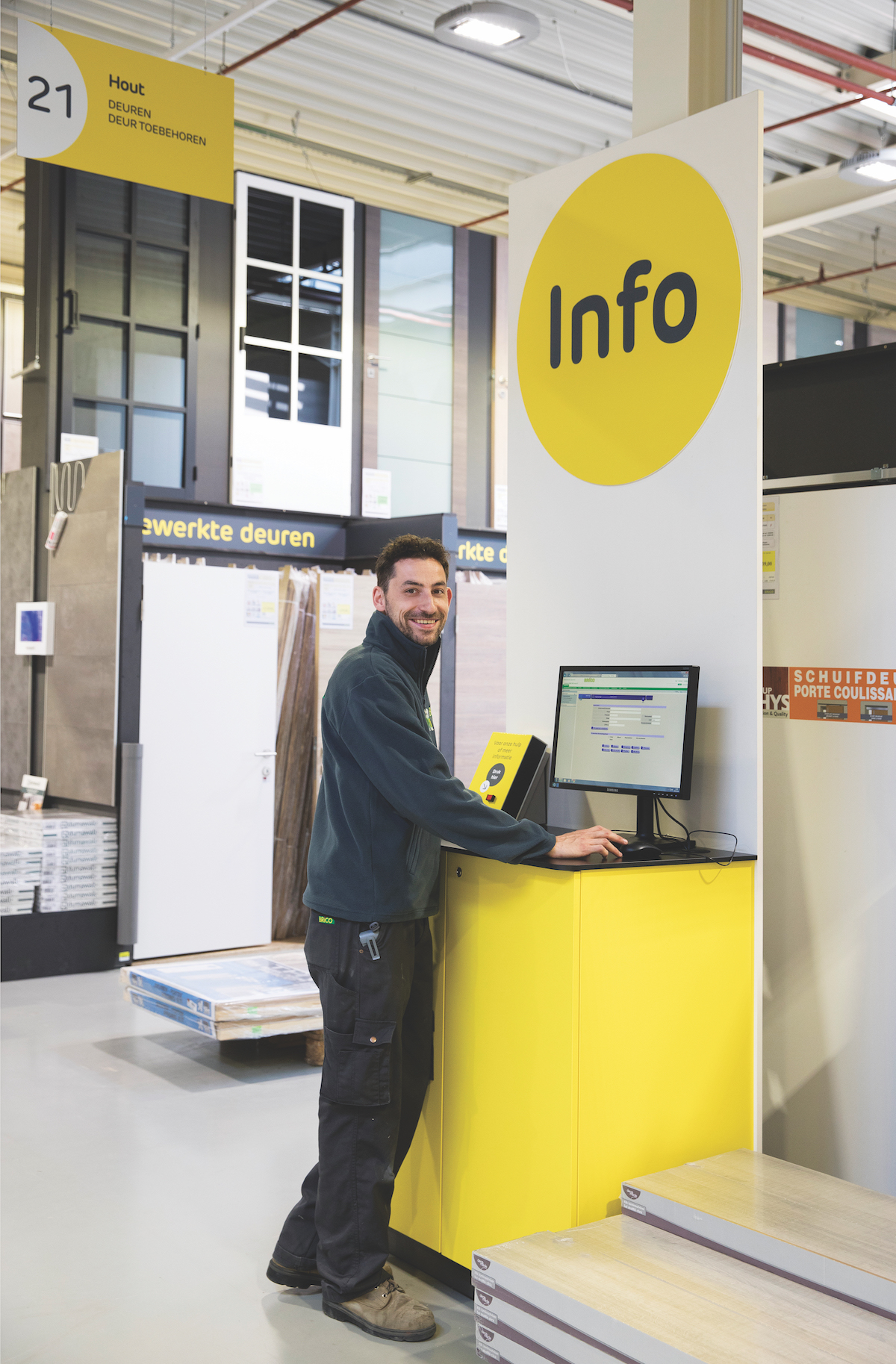 “Real retail is a trade-off between choice and accessibility,” Guy explains. “When I’m talking about accessibility, it’s a broad view. It could be economical, it could be technical – especially in DIY. We sometimes sell some very complex products, which people cannot use intuitively. They need face-to-face advice to be able to use these products. That’s the notion of accessibility and the notion of choice. It’s the two main forces that drive up the value proposition for customers.

“Digital commerce is changing the rules,” he continues. “Choice can be infinite, but there are issues to solve around accessibility, particularly because customers often cannot acquire a product immediately. This is the first challenge. Another of the biggest challenges over the past two years was to rework and redefine the value proposition for each of the retail formats and then apply this new value proposition to everything, including the layout, range, services, and everything else that’s either directly or indirectly linked to the customer experience.”

For Guy, this is all part of his core ideology – going back to basics and avoiding overextension, particularly in such a rapidly evolving digital retail space. “‘Back to basics’ is about making a clear choice and making sure that the company is not investing everywhere at once and being inefficient,” he says. “This is a risk when a new situation, such as ecommerce, is emerging.

“‘Back to basics’ … is about making sure that the company is not investing everywhere at once and being inefficient.”

You may have seen Maxeda’s brands not only online or in physical stores, but also on TV. Brico has sponsored several programs in the popular home-improvement format, including Baksteen in de Maag and Une Brique Dans Le Ventre (both of which translate to ‘brick in the stomach’). Meanwhile, BricoPlanit served as the main sponsor of the Flemish version of a show called Help, Mijn Man Is Een Klusser! (‘Help, My Husband is a Handyman!’), which had an average audience of 250,000 viewers.

“We can simply rework the organisation so that it’s flexible and agile enough to meet this challenge – to invest in the stores and the new digital economy at the same time,” he continues. “That was the first step of my plan – what we call ‘back to simplicity’. This means that in many cases, we had to look at our organisation and make it more agile, which sometimes means reducing the number of people.

“We also had to redefine our core sales base so that it was more competitive in retail. That’s how you can really increase your position in the market, by asking yourself, ‘Where do we need to invest? What are our main priorities?’ and then focusing on those.”

This doesn’t mean that Maxeda will neglect investment in IT and digital capabilities. Instead, Guy will work to ensure equilibrium. After all, with more and more consumers shopping online, the company would be ill-advised to ignore the digital sphere.

“Digital disruption has increased the number of competitors,” Guy says. “In fact, this new kind of retailer is creating a new way of thinking about value. Because when we look at ecommerce today, few operators are really making money through product sales, which means that the value is coming from somewhere else. The shift is less sensitive for technological development because it’s just an enabler, but it’s having a big impact on the organisation of the value share. You see lots of companies investing in ecommerce today that are making more money with logistic or IT services.”

Even though Maxeda isn’t throwing itself into ecommerce with reckless abandon, it’s still finding success and receiving accolades, undoubtedly thanks to that restrained, measured approach. The Brico chain’s online store, for example, recently won a Webshop Award in Belgium as the consumers’ choice in the ‘Living & Interior’ category. According to the European Home Improvement Monitor, it’s also the best-known DIY retail website in the country. Meanwhile, Formido in the Netherlands also received a Webshop Award for best online store in the ‘DIY’ category.

Having trained as an engineer, Guy is always eager to pursue efficiency throughout Maxeda’s operations. This extends to the retail group’s partnerships and supply chains. An inherent aspect of Maxeda’s relationship with its suppliers is that it expects all partners to preserve basic human rights throughout the supply chain. This includes the right to unionise; the right to be free from discrimination, harassment and violence; and the right to fair hours and compensation. In this way, Maxeda sets a high standard not only for delivery of goods and services, but also for ethical excellence. 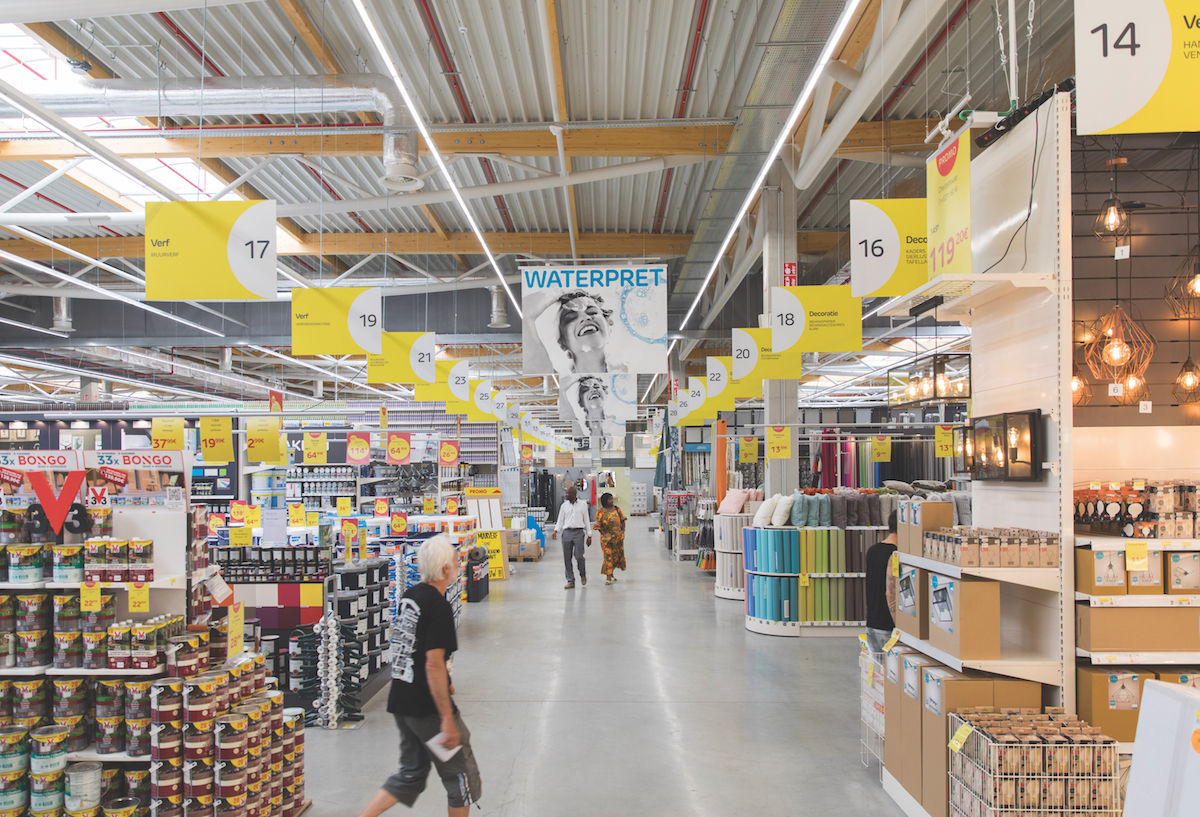 Guy also aims to ensure that these partnerships and supply chains operate as smoothly as possible. “It’s about the way you organise your supply chain,” Guy says. “Do you need a central house? Are you using cross-docking [immediately shifting goods from one form of transport to the next] and a direct connection to suppliers? It’s not just about the choice or location of the suppliers. It’s also about the route, the distance, the time, and the method by which the product goes from the supplier to the customers, as well as the organisation required to get it into the store.”

But against the backdrop of digital commerce’s rapid transformation, Guy is keeping one eye on Maxeda’s future. “The real question for the future, for the retailer, is to think about what could be the new position on the value chain,” he says. “That’s a very important question to answer – probably the most important if you want to continue to have profitable growth. Because growth without profitability – it’s just an illusion.”

“The real question for the future, for the retailer, is to think about what could be the new position on the value chain.” 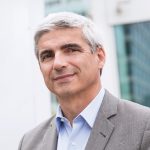