Thrown into the fire: Kavine Vaswani 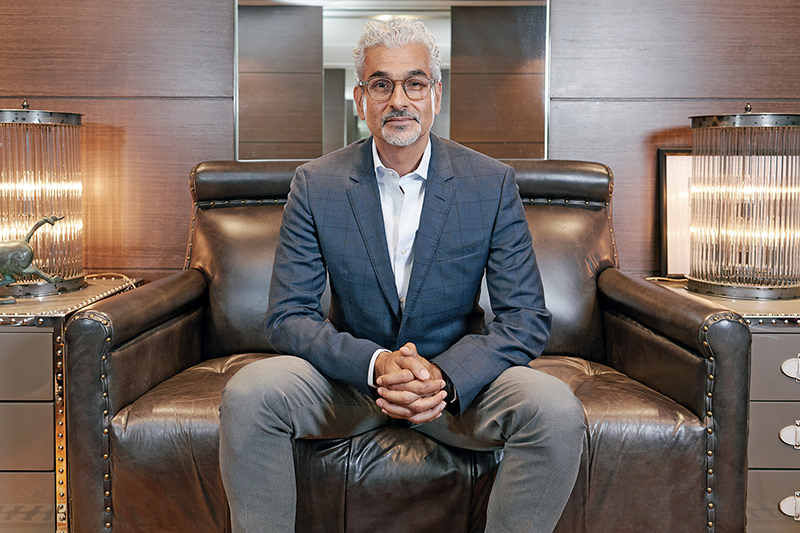 Back in 1991, Kavine Vaswani was enjoying life as a young professional in New York. He had recently graduated from Boston University and entered the business world through a position at Merrill Lynch. He was 22 and his family was spread across Hong Kong, Nigeria, China, India and the UK.

“I was building a life of my own in a very dynamic city,” he recalls. But after just 18 months at Merrill Lynch, at the height of his youthful independence, the combined weight of family duties and visa restrictions crashed over him, and he was summoned to Lagos, Nigeria, to join the family business.

Kavine’s father had set up Assudamal & Sons in Hong Kong in 1959 and in 1971, launched operations in an entity called Deekay & Sons (Nig) Ltd in Nigeria where the company still does the major share of its business.

When Kavine arrived from New York in 1991, the contrast between the life he left and the one he was about to begin was daunting. “I had come from completing my education and a short work stint in the US, where in the 80s and 90s it was all about efficiency and quality,” Kavine says.

“Now, here I was in an emerging market, where electricity was irregular, water was irregular, infrastructure was haphazard and military coups were not uncommon. I felt like I was being thrown into the fire.”

Before the accident, I had relied on the expertise of my more senior colleagues. But now I saw that I had to manage these things myself.

The figurative soon became literal. A few years into his new job at the Nigerian operation, where Kavine was overseeing imports and the distribution of various consumer goods and home appliances, disaster struck. In the middle of the night, a power surge tripped a breaker and the company warehouse burst into flames.

“I was woken up from a deep sleep and immediately started trying to help the situation and salvage anything I could. But the fire department didn’t arrive in time and all of our assets, our entire stock, burned before my eyes,” Kavine says.

“It was like a knife in my stomach. Literally, nothing survived.” The conflagration was a wake-up call. Kavine began investigating every weakness within the company that might have contributed to the fire. He found lapses in his facilities’ structural soundness, as well as in Deekay’s insurance.

“Before the accident, I had relied on the expertise of my more senior colleagues. But now I saw that I had to manage these things myself,” he explains.

He became proficient in insurance procedures and assured the company’s suppliers that he would honour all existing commitments and liabilities. Kavine also set up payment plans and secured the trust of Assudamal’s partners around the world.

“It was a huge challenge to finally get our partners to say: ‘You know what? Kavine, we believe in you. You’re young. Your experience may not be as high as the others, but there is hope and we want to grow with you again.’”

The patience and flexibility Kavine developed during those early trials prepared him for the growth journey on which he would lead Assudamal as Managing Director.

After rebuilding the company’s stock and relationships, Kavine spent the next decade perfecting the import and distribution side of the business. He designed processes to be lean and agile – qualities that have helped keep the business stable during the current pandemic.

“After a few years, it became kind of like riding a bicycle,” he says. It was time to engage his entrepreneurial spirit and branch out. He led the group’s expansion into manufacturing with a line of biscuits.

“I was at an age where I was ready to take on a new project and something different to our portfolio,” Kavine says. “I decided to explore my interest in food. There is no replacement for food, not even love or fresh air.”

The biscuit business grew until the group had the opportunity to sell it to British snack brand McVitie’s. “Watching something we built from scratch succeed gave us the confidence to enter another completely new industry,” he says.

Kavine continued with manufacturing, this time building on Assudamal’s existing paper distribution capabilities by setting up a factory to cut, print and bind a series of exercise books for schools.

Over the next few years, he continued leveraging the company’s strong printing and paper production facilities by adding facilities to grow its mono carton packaging unit. In 2019, Assudamal also spearheaded a new investment into corrugation packaging, integrating services for an existing and growing customer base.

“It’s not the sexiest industry, but we saw a need and decided to fill it,” Kavine says. “After all these years, I feel both humbled and proud to shout from my own little rooftop that by following that entrepreneurial spirit, every one of our businesses has been a success story.

“Our plan is to reach US$1 billion (€852.6 million) in total group turnover by 2025. As we speak, with the challenges presented by the pandemic, it’s a tough target but one we hope we will achieve.”