Cato Syversen left his home country of Norway in 2001 to help the credit checking firm Creditsafe, then in its infancy, set up a new operation in the Welsh town of Caerphilly. The company had been struggling to keep costs down at its former base in London and was losing money, and he was to be in charge of the relocation. Cato agreed to stay in Wales for 18 months to get it done, but he felt so at home there – another nation of just a few million people with a striving attitude – that he decided to stay longer.

“I went over to do that for one and a half years, and I’m still here,” he smiles. Cato has now been CEO of the company for almost 20 years, a time in which he has overseen a massive global expansion and turned Creditsafe into the world’s most-used provider of online business credit reports.

The company has 23 offices across 13 countries and provides reports on 365 million businesses in 160 countries. Creditsafe has expanded its services beyond just credit checking, using its data to gain a deeper understanding of commercial credit, mergers and acquisitions, and relationships with suppliers.

The models it has created can predict almost 70% of insolvencies up to a year before they happen. Achieving global success has required upending the norms of the business credit reporting industry and constantly looking ahead to determine how digital tools will create new opportunities.

Cato has loved every minute of it. “I’m very much enjoying being a disruptor,” he admits. In fact, it was Creditsafe’s disruptive approach that first drew him to the company when he came across it in 1997.

Because I started out so young, I got to be a CEO by the age of 35. I’ve been able to have so many failures and get a good understanding of what works and what doesn’t.

“It was traditionally an industry where you paid per click, and Creditsafe moved towards paying a flat rate,” he shares. “It was this concept of having a global ambition and doing this at full scale. So it left behind this traditional idea of having field reps and did it all over the phone. It broke so many barriers, and the global perspective intrigued me.”

Cato may have accomplished more in his career than most, but he didn’t start out with a hunger to lead. In the early 1990s, he was content working as a bank clerk, he explains. “It’s a weird one because I was a happy social democrat in Norway when I had my job, and I didn’t even have that much ambition in life,” he recalls. 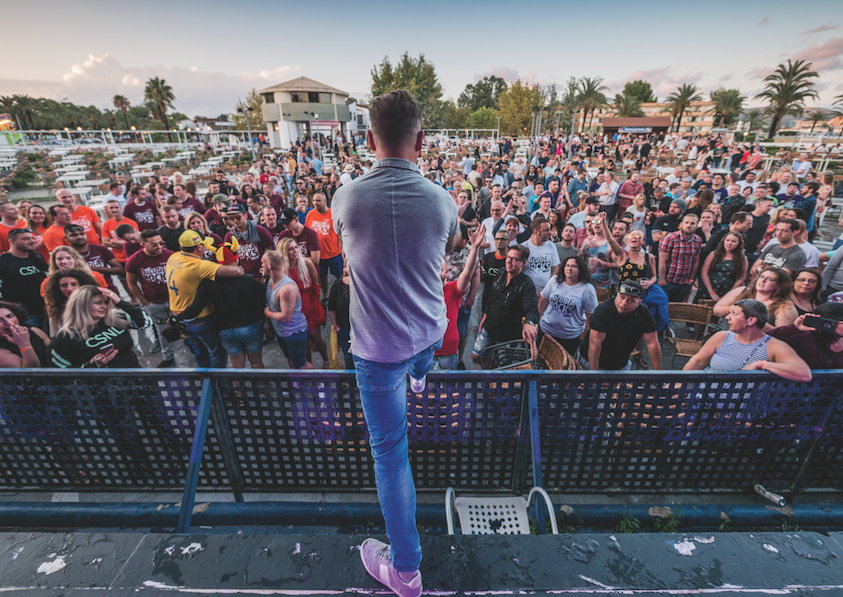 “Then, in 1992, we had the biggest financial crisis in Norway and Sweden. I think the seven largest banks in Norway were taken over by the government. Luckily, I got made redundant because otherwise, I would be working as a bank clerk today.” After that, at age 28, Cato went into sales and realised he had found his calling.

“That was just, ‘Wow, this is my thing.’ I became way more confident,” he says. “The beauty for me is that because I started out so young, I got to be a CEO by the age of 35. I’ve been able to have so many failures and get a good understanding of what works and what doesn’t.”

Moving from London to Wales all those years ago was about more than just cutting costs. One of the most valuable assets Cato found in his adoptive home was the drive and enthusiasm of the people applying to work for Creditsafe.

In London, the company struggled to fill sales roles, despite the city’s huge population, whereas in Caerphilly, a town of about 169,000 at the time, he had little trouble building up his team. Wales, where jobs were much scarcer than in the capital, was full of talented young people who needed someone to give them a chance. The company’s recruitment policy has evolved since then, but it follows the same principles.

“In the early days – and there’s still an element of it now – but back when we were diehards on the sales front, we used to hire for attitude and train for skills. So we didn’t look too much at the CVs,” Cato confesses.

“Now, it’s more about finding the ones who’ve got the drive, because as long as they’ve got the drive to succeed, we’ll give them all the time they need. It’s not always easy to suss it out in the recruitment phase, but it’s definitely something we look a lot at: who really wants this?” It was a similar approach to recruiting that led Creditsafe to setting up operations in Turin, a once-deprived city in Italy that has since made an economic comeback.

“In Italy, it’s a lot about who you know, and there isn’t a lot of telesales there, so we thought we’d start small,” Cato reveals. “The one thing we learned is that location is crucial. A place might have people with skill sets that are among the best in the world from an analytical point of view, but it can be one of the most expensive places in the world from an operational point of view.

Because I started out so young, I got to be a CEO by the age of 35. I’ve been able to have so many failures and get a good understanding of what works and what doesn’t.

“With Italy, we looked at the demographics and we did a tour for a week. It has great food and wine. We checked a few events and narrowed it down to Prato, outside Florence, and Turin. Then we put the adverts out. We said we’re setting up in each place – it was a little bit naughty. We said we’re looking for two team leaders and 24 salespeople.

“Ultimately, it was Turin that chose us, because the response we got from people there was overwhelming. That’s the biggest success we ever had entering a new country.”

Cato helped smooth out Creditsafe’s entry into Italy by spending six months learning Italian, just so he could give his opening speech in the local language. “Questo non è un lavoro, è uno stile di vita,” he told his new team. “This is not a job, it is a lifestyle.” He laughs, “They all went mental.” Creditsafe has been featured in The Sunday Times list of 100 Best Companies to Work For, perhaps in part because Cato is always mindful of the need to bring the excitement and passion he has for sales to the rest of the team. Now that many of the young recruits he hired years ago are still with the company, he is switching his focus to ensuring they have valuable career paths.

“I think four years ago, the average age of our staff was 29. As they get older and have been with us longer, you can’t just do the rah-rah in the morning anymore. You need a different kind of engagement,” he points out.

“It’s about career progression and making sure that people care and feel excited about the job. Any organisation is probably always going to have 20–25% who don’t really care. It’s just another job for them. But it’s about maintaining that diehard core in the middle who are truly passionate about Creditsafe.”

Maintaining this passion across the company has been challenging in a work-from-home environment during the pandemic, but community building tools like a company radio station have helped.

Another major challenge caused by COVID-19 was because of the unprecedented nature of the crisis; Creditsafe’s predictive models sometimes didn’t have the data they needed to assess the creditworthiness of companies.

“We built all our modelling on the past to predict the future, but how can you use the past when it’s COVID-19?” Cato asks.

“So we had to find new ways of modelling. We looked at industries that were exposed and whether there were redundancies. Who was likely to run out of money? We couldn’t say it was clearly statistically based, but we could actually at least have portfolios showing hotspots where you might have a problem. We had to move fast and, ultimately, try things and fail fast too.”

Because companies have held onto their cash over the past year and a half, Creditsafe saw less revenue growth than usual this year – 9%, compared to the usual 15%. But Cato expects that to pick back up again soon. “We always work with a five-year plan, so I know exactly where we’re going,” he says.

“We double our revenues every fifth year.” To achieve that growth, the company won’t necessarily be looking to enter new markets, but rather to innovate and diversify its offerings in the countries where its services are already available. “We would expand into more markets, but not for any price,” Cato explains.

“We cover 75% of the global market now, so do I put a lot of effort into a new market, or do I just expand the current market in each country? “We see huge growth in our data being used more as master data. It’s not just the traditional credit check; it’s about all of your systems, whether it’s the prospect pool or the sales system or the ledger or debt collection, you need fresh data behind it.”

Two decades of embracing a disruptive, fail-fast model has made Cato and the rest of Creditsafe’s leadership team highly adept at identifying opportunities abroad and avoiding pitfalls.

“You’ve got to be pre-emptive and work with your customers and clients but also be a bit of a Steve Jobs – there are needs that customers don’t know they have,” he says.

“By using new technology, we can see things that they still can’t see, so you hold that edge. I would say don’t be too obsessed with what this industry looks like now or your competitors. You go a bit wider, and obviously, have some fun.” 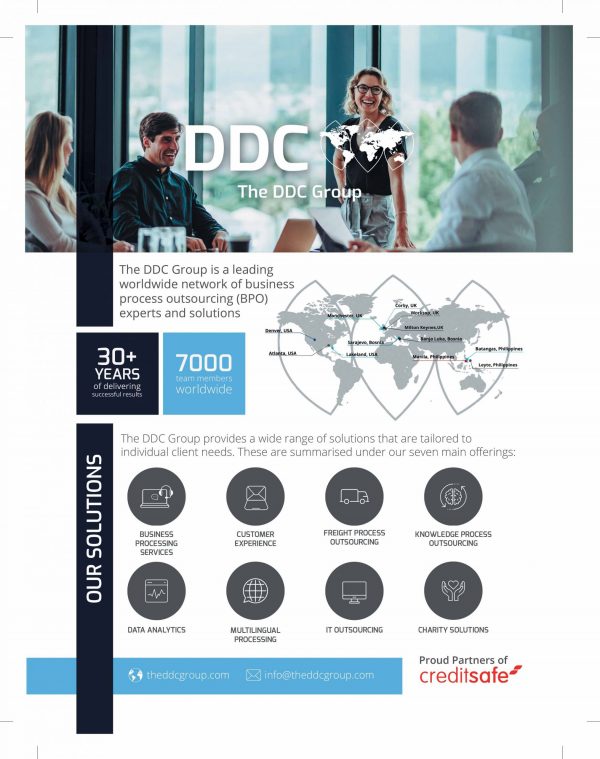 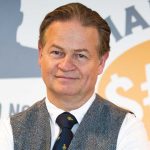