When South African digital transformation strategist and solution provider Nexio appointed Mickey Mashale as CEO in August 2020, it was a move that simultaneously accepted a challenge and threw down a gauntlet of its own.

Mickey had been acting as interim CEO for Nexio South Africa since March of that year, brought in specifically to scrutinise and refine the company’s strategy. The board sought Mickey’s advice to determine if they were on the right path in terms of strategy, and if so, was the organisation fit-for-purpose in driving that strategy.

If what she found wasn’t up to scratch, the board authorised Mickey to offer an alternative. In response, she presented a revised strategy to the board from a budgetary perspective. The board’s reply was instant: a green light.

Not only did the board approve her plan, but they also asked her to implement it; given her belief in the plan, she was asked to drive it. Mickey’s been driving ever since. “They were adamant they didn’t want a theoretical CEO; they wanted someone who would roll up their sleeves and do the implementation,” she says.

“I welcomed the challenge presented to me, as I don’t walk away from challenges. When I looked at the potential that lay ahead for Nexio, it became even more exciting.”

The en masse transition to Industry 4.0 is where that potential exists – and it’s slowly but surely being realised. Founded in 2001 as StorTech, a storage and data centre technology firm, Nexio evolved over time to become a vital partner to companies revising their business strategy for the digital age.

We cannot continue just being a South African company. It’s now about how we start to service the rest of Africa.

In addition to workforce transformations, Nexio’s range of offerings includes big data analytics, cloud-based solutions and security. According to Mickey, the Johannesburg company operates with an aim to unshackle businesses from the rigours of technology so they’re free to proactively embrace opportunities.

In addition, Mickey believes Nexio’s status as a relative newcomer to the market gives it an edge. “We’re sitting in an environment where our major competitors are going through a tough time, and it’s left their customers unsettled,” she explains.

“So we have an opportunity to take up that space. It’s a small window of opportunity; if we miss it, they’ll rebuild.” Nexio, she says, has gone the extra mile to “get our house in order” in response to the dynamic market.

“Customers in the market are unhappy. They’re worried about the sustainability of industry players and the loss of skills within those companies. That’s the opportunity we’re going after.” The pursuit of this opportunity means an expansion of operations for Nexio. “We cannot continue just being a South African company,” Mickey says.

“It’s now about how we start to service the rest of Africa.” As Nexio’s outbound global clients consolidate their market position into Africa, it affords Nexio opportunities to also expand into the continent.

“As they go out into the markets, we can be that system integrator that provides the managed services centre of excellence within that. This is what will help Nexio become a global entity, and a player to be reckoned with across the world.”

The significance of a majority Black-owned company like Nexio making such strides is a clear win for Mickey. “For me, it’s not even about being compliant with legislation,” she says.

“It’s key that companies reflect the macro environment in which we operate. It’s also a matter of ensuring we don’t just achieve this kind of ownership on a shareholder level and think that’s enough.”

A truthful representation of ownership is a passion of Mickey’s, as is female leadership. “One of the key shortcomings of the ICT industry is that we don’t look at female leaders from a technical point of view,” she says.

“They are mostly placed in supporting roles, but not a lot of them actually lead the sales force because it’s so technically based, so we tend to have males leading that environment.”

For Mickey, who has built an illustrious 20-year career in ICT, this imbalance is down to an unjustified reluctance to look for qualified women.

“There are enough female engineers and technicians to do these jobs. Let’s not revert to the norm of it being easier to find males to fill these roles. I mean, women are more than 50% of the population, yet companies aren’t reflecting even 20% of that. As an industry we need to strive to appoint women at leadership roles across all levels and business units of our companies.”

Mickey’s ‘lead by example’ is typical of her approach to leadership. “I’d like to think I’m one of those people who leads the way I want to be led,” she shares.

“My team is made up of specialists in their respective areas; I want the team to feel empowered, to deliver on what we have contracted on. They take the accountability to deliver on time and according to expectation and when red flags are picked up, let’s discuss in time and address the issues to get the deliverables back on track. 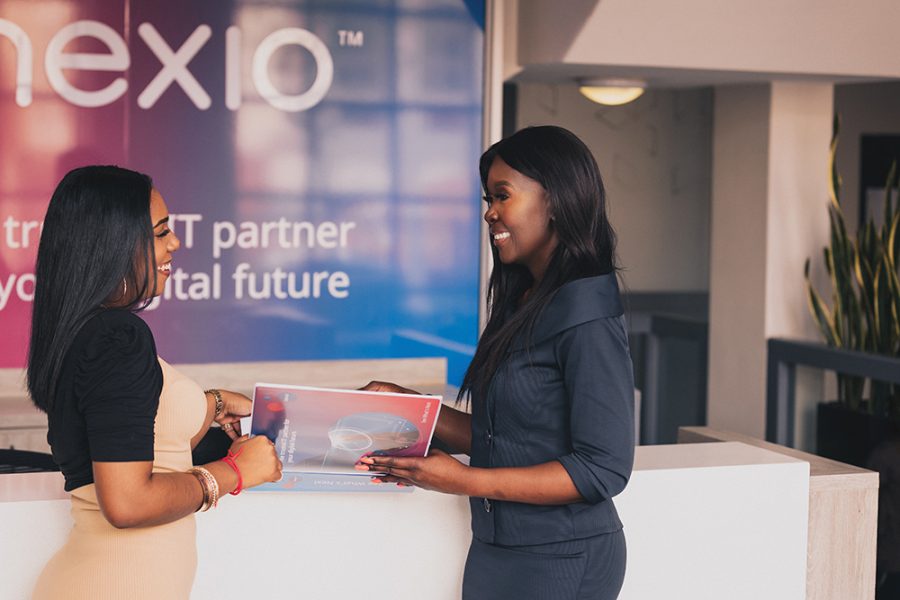 “I listen and engage the teams on milestones at agreed stages, and we deal with the issues together. That’s the biggest thing for me. I don’t want to be constantly on their shoulders checking up on them; that just takes empowerment away.”

What she does do is act as a friendly ear, no matter the issue. “If something’s not going right, if we’ve not reached a checkpoint, I tell my team to come to me. Be upfront with me. Talk to me about the ugly stuff. Feel safe enough to say, ‘Mickey, I’ve messed up.’ Then we can deal with it together. It’s not about the person, it’s about delivering on what we promise. That’s the biggest thing for me.”

It’s the kind of transparency that builds strong relationships not just within the company but also among Nexio’s network of partners. “Being a managed services company, we work with multiple service providers, sometimes even for the same solution, because they each suit a different tower of services we offer – cloud, data centres, networking and security,” Mickey says.

“We look at what’s going to be the best solution for our customers and take the best of breed.” This strategy has led to firm bonds with industry giants such as Cisco, Microsoft, Dell and Huawei.

“We added another CoE focused on Huawei as more and more customers looked for alternatives. We found that Huawei maps across multiple towers of our propositions from networking, cloud, security, IoT. It made sense to incorporate them as a partner. We’re also a CoE for Microsoft in terms of driving cloud.”

As 2021 unfolds, Mickey’s plans are squarely focused on driving Nexio to the next level and Africa – a continent in the midst of the Fourth Industrial Revolution – is the first lap. “COVID-19 helped Nexio pivot to a truly digital system integrator that enabled its customers to operate seamlessly, remotely,” she explains.

“Nexio worked with its customers to transform Working From Home to be the norm, securing their connection, their data and access to it. That success enabled Mickey to begin pushing Nexio to customers beyond South Africa. This has laid the foundations for our global play. We have stabilised South Africa, finalised the Africa Operating Model. The next frontier will be delivering to the globe.”