Anil Yendluri believes the challenges he faced during the many years he served as a police officer prepared him well for the top job at Krishnapatnam Port (KPCL). Having worked with the Indian Police Service for nearly 25 years, Anil is used to making split-second decisions to determine safe and responsible results. Running India’s fastest-growing port is no different.

“Yes, working with the IPS was very challenging, you face a lot of surprises day in and day out,” he says. “But you learn to deal with them, take them in your stride, learn and move on.

“The port environment is equally dynamic, so my experience in my previous career has really helped me to handle unpredictable situations, correct or improve them and move on.”

Anil was appointed CEO at the company’s inception in 2008, embracing the opportunity for a complete turnabout in career and relishing the challenges ahead. And there were many.

Krishnapatnam Port is located along India’s south-east coast, in the state of Andhra Pradesh, nearly 200 kilometres north of Chennai. In its drive to emerge as the eastern gateway of India, the once minor facility has been developed into a modern deep-water port and more widely productive trading hub to serve global shipping customers with dry bulk including iron ore, coal, containers, as well as liquid bulk cargo.

“I was given this wonderful chance to sit with planners and develop and build a port, to offer an impressive economic enterprise to Andhra Pradesh,” Anil remembers. “That included building a lot of operational systems and creating departments.

“I had a lot to learn. But as a CEO, that is personally very gratifying. I’ve been very happy tackling the unpredictability of running the day-to-day operations, the problems, failures and successes.”

“I’ve been very happy tackling the unpredictability of running the day-to-day operations, the problems, failures and successes.”

India has about 7,500 kilometres of coastline, dotted with 13 major ports controlled by the central government’s Ministry of Shipping, and about 200 privately owned minor ports run by the relevant departments or ministries in the country’s nine coastal states.

The port town of Krishnapatnam has long been involved in maritime trade – its legacy dates back to the 16th century. The area was ruled by Emperor Sri Krishnadevaraya, who used the port to import horses and elephants.

Centuries later, under British rule, it was used to run small boats between Chennai in the south and the Krishna river delta in the north, and in the 1960s iron ore was exported from Krishnapatnam in boats. In the 1980s, the port was declared a minor port as India’s maritime trade demanded increased port capacity to maintain its share in international markets.

Described as futuristic, KPCL processes up to 2,000 trucks a day, and over the past decade it has overtaken five major ports to become the sixth largest port in the country and the second largest private port. It’s an achievement Anil is understandably proud of, particularly when his company surpassed the very competitive port of Chennai.

Anil believes it’s the unrelenting focus on providing customers with exceptional service that is key to its success. He says new technology has been introduced to assist with transparency and accountability, an initiative which has left KPCL customers feeling more confident.

“For example, we have introduced new software systems that have made the job much easier. Documentation, such as port permissions, is now cleared quickly from one desk in one office, whereas previously customers had to run around various offices to get their documents cleared and their cargo in or out.

“We were also the first in India to set up drive-through container scanners. It now takes less than a minute to examine the container through and record the contents for inspection by customs officers.”

Anil’s respect for his customers extends to his high regard for everyone working on the ground. Rather than seeing them as just port partners, he prefers to acknowledge them as end-to-end supply chain partners.

“They’ll be the ship unloaders, crane operators, truck drivers, all the people whose core activities we focus on. We have fantastic, long-term relationships with each of these guys and we encourage them to set up their offices in the port so we can have quality interaction with them. In turn, we support them by providing the necessary infrastructure and facilities they need, right down to food and water.” Equally impressive is the port’s track record in operations. KPCL has been the recipient of multiple awards – it won nine last year alone – including Smart Terminal of the Year, Private Port of the Year and the IEBG Global Excellence Award.

In 2015, KPCL also received the Golden Peacock award for its initiatives and achievements in environmental management. The accolade recognised KPCL’s planting of more than four million trees within the port area and more than 50,000 trees in surrounding villages. Solar lights and water heaters were installed, along with gas connections established to discourage villagers from cutting down trees.

As part of its sustainable strategy, the railway line network was electrified from all storage yards to reduce carbon footprint and the diesel consumption of engines, and there’s a move towards more solar and wind energy to reduce fossil fuel usage.

Meanwhile, KPCL is developing its industrial base. There are plans to build terminals to cater to all forms of liquid cargo including oil, gas and chemicals, and the company is focusing on road and rail connectivity projects to bring the port closer to the hinterlands, expanding as far as Karnataka and eastern Maharashtra.

Anil describes the daily operations of a port as unlike any other industry. The business is largely reliant on external factors, and not always straightforward.

Countless approvals on environmental and industrial fronts from either state or central governments are required, foreign economies can influence trade, and nature is also a force to be reckoned with.

“It’s a continually lively environment where nothing today is like it was yesterday, nor will be tomorrow. Every single day you see new things, new cargoes coming, new ways of operation, new challenges. It’s very vigorous.

“It’s a continually lively environment where nothing today is like it was yesterday, nor will be tomorrow.”

“So many things can affect us – exporters, importers, micro-economic and macro-economic policies, the weather, environment and global geopolitical dynamics. All these things have an impact.

“We are strongly linked to the global economy, so we can predict how foreign countries will expand and grow and how India is going to grow to keep up and support, or not support, these economies.

“We also have to be in constant touch with the various government agencies and operational teams to prevent cargo being stuck inside the port. This is why we really need to be connected to the customer. It’s the only way we can handle any kind of exigency or surprises and make it easier for them.”

The skills of KPCL’s 800-plus employees cannot be underestimated as they grapple daily with unexpected situations. Anil attributes their meticulous attention to detail as key to solving problems, adding that a culture based on everyone continuing to learn is another performance quality.

“There is no single thing where we think, ‘This is the best model’,” he explains. “While obviously we always try to work on serving our customers with the best model, we are constantly researching better equipment or a better way of doing the same thing so we can learn and implement those lessons. And we found those ideas may come from elsewhere around the world.”

While it’s fair to assume Anil’s leadership style is hands-on and inclusive, he’s no fan of micromanaging. He’s learned to trust and delegate, and he enjoys a healthy relationship with both his customers and employees, from his executives to his operational teams and workers at grassroots levels.

“Yes, I do delegate everything, but I ensure I have my finger on the pulse at all times and that I am aware of everything that happens,” he says.

“My focus is split two ways. I am in close contact with my senior marketing and customer service team to make sure I understand the customers’ needs and can configure our operations as required. On the other side, I am continuously in touch with all my operational teams, all my department heads, day in, day out, to see that operations are carried out in the best fashion possible.”

From ensuring truck drivers are not left exhausted standing in queues to jumping in to help a customer urgently in need of cargo, Anil is passionate about keeping KPCL operations running efficiently.

“Actually, when I think about it, the unpredictability is not even day-to-day, it’s more like minute-to-minute,” he laughs.

“It’s all on a real-time basis. But our customers benefit from our efficiencies and our ultimate aim is to bring them more value by serving them honestly, transparently, efficiently and being 100% accountable to them.

“We really contribute on all fronts: operations, the environment, social commitment, promoters and the welfare of our employees. The port has grown from strength to strength.” 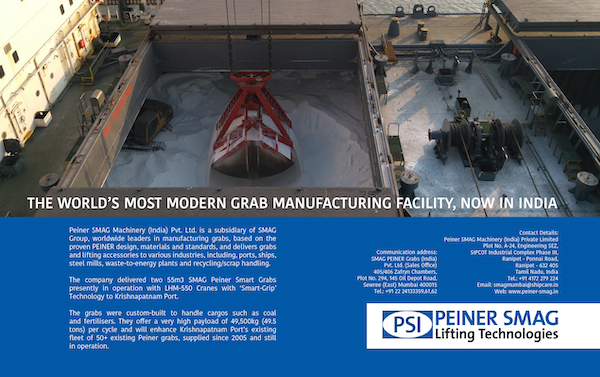