When an iconic Italian sports car manufacturer updates its flagship machine, you can be sure that it’s not just change for change’s sake. 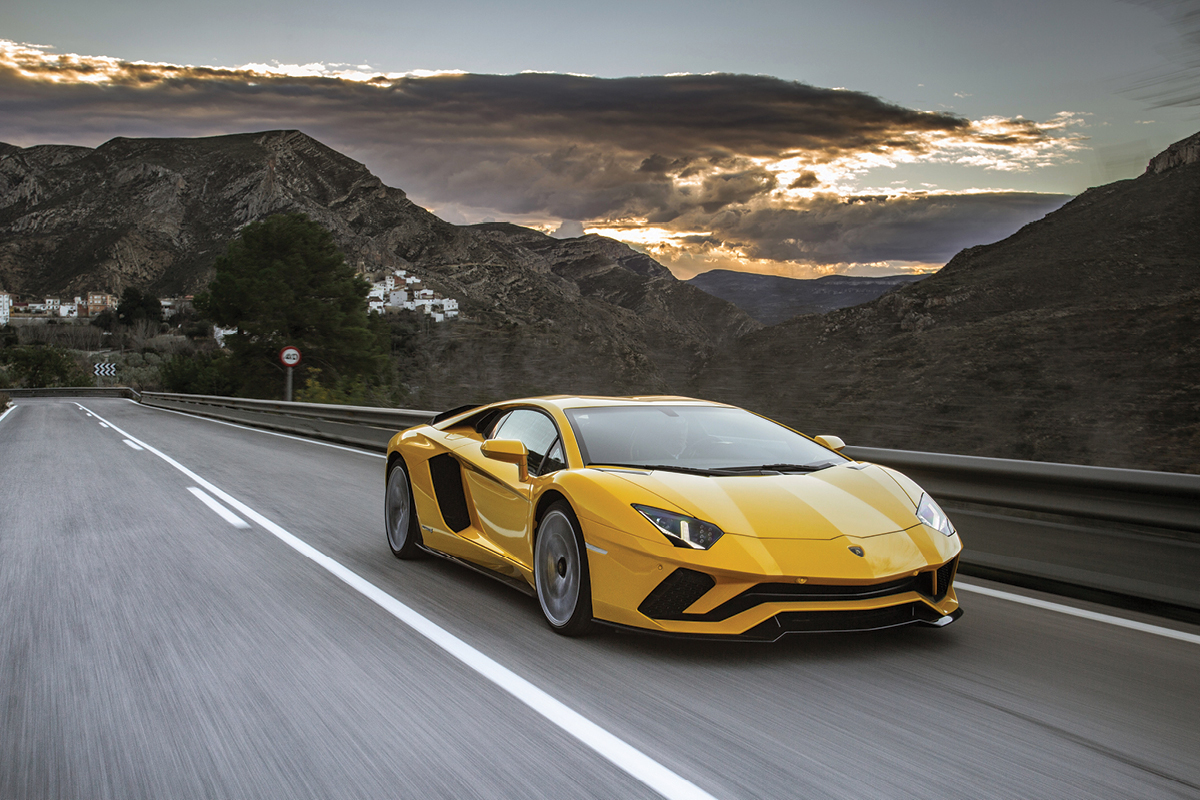 In an unassuming two-storey building high in Italy’s north, an artisan works his magic. His hands, strengthened from years of work, create something very special. He doesn’t use clay or metal; rather, the materials of choice are flour, oil, water and salt. Yes, creating a culinary masterpiece relies on a fine foundation, so when it comes to making the greatest pizza in the world, this base cannot be bettered.

The restaurant is called Pizzeria Maggi, and if you ever find yourself in Sant’Agata Bolognese, it should absolutely be the first place you visit. But just down the road should be your second – Automobili Lamborghini. Given it’s surrounded by farming country, this small factory seems slightly out of place, but it creates some of the most desirable metal the world has ever seen. And earlier this year it launched its flagship – the Lamborghini Aventador S.

Oh, you’ve seen it before? Well, you may have seen an Aventador, but this one has undergone an extensive regeneration – there’s an ‘S’ on the end now, and that really does make all the difference.

The original Aventador was a manic, brutal machine that lacked the final polish to make it safe at the limit. Thus, to help the new car stick to the road more effectively, Lambo’s design team took the original and skillfully mashed together elements from a space shuttle, a snake and a shark. Strange, yes, but wind-tunnel testing has proved that the result deftly combines form with function – surely the holy grail of exterior shaping. Thanks to the new front splitter with fins (or fangs, perhaps, depending on how you look at them), downforce has been increased by 130%. A new 3 outlet shuttle exhaust also prevents the fire-spitting engine from lighting up the car. The stability control has been enhanced, the brakes have been reworked, and it sports a new set of boots. But the real news is the addition of rear-wheel steering.

At low speeds, the rear wheels turn in the opposite direction to the fronts, effectively shortening the wheelbase. At higher speeds, it works the opposite way, turning the rears in the same direction as the fronts, giving a virtual longer wheelbase that aids stability. Time to see if it works as intended.

It’s not often you’re thrown the keys to an $800,000 machine and told to go nuts – that didn’t happen here either. Instead, Lamborghini invited us to test its wares in the safe confines of Phillip Island Grand Prix Circuit. Under the watchful eye of the instructors at Lamborghini Accademia it was all about teaching us how to handle this magnificent, ferocious beast.

The guidance is comforting, because after a few laps we’re topping a hair-raising 290km/h on the main straight, looking at the ocean ahead, wondering whether we’ll end spearing off the track and become great-white fodder. It’s a good thing, then, that the brakes of the Aventador S are now up to the task.

While the original Aventador was equal parts beautiful and savage, its worst quality wasn’t the cricket-bat-to-the-head gear changes; it was the anchors. Even on public roads they would overheat, so you can imagine how potentially dangerous they were on a track. The Aventador S, however, has used the new aero package to more effectively cool the brakes.

All 4 cars at the track ran all day without a hint of brake fade, reliably and authoritatively washing speed off, lap after lap. The 6.5-litre V12 engine has also come in for an upgrade, now producing a mammoth 525kW (or 740hp in old money) and 690Nm, without a hint of forced induction. From a standing start, the Aventador S will hit 100km/h in just 2.9 seconds. This is the fastest car you can buy in Australia straight off the showroom floor.

At 4,000rpm, the motor has a distinctive bark, with a resonance that echoes through the cabin (and your head); and as it continues climbing toward its 8,500rpm ceiling it utters a wail like no other motor around. Pull one of the large paddle shifters to downshift and unburnt fuel crackles and bangs on the overrun, sounding like Yosemite Sam with a pair of AK-47s.

From a standing start, the Aventador S will hit 100km/h in 2.9 seconds. Try visualising that. Keep the foot buried and it hits 200km/h in 8.8 seconds. With enough road, you’ll crack 350km/h before the laws of physics rein you in. Yes, this is the fastest car you can buy in Australia straight off the showroom floor.

Turn into a corner and it darts in, with the rear wheels pointing it in the right direction. It cuts a clean line to the apex, chatting to your fingertips, communicating grip levels and surface condition.

Because it’s now so much more predictable and progressive, it never threatens to rip your head off like the old car did. It’s faster, safer and more accessible. That said, the savage gear changes will warrant the occasional visit to the physio to realign your neck. The car may have improved out of sight, but the gearbox is still decidedly old-school. 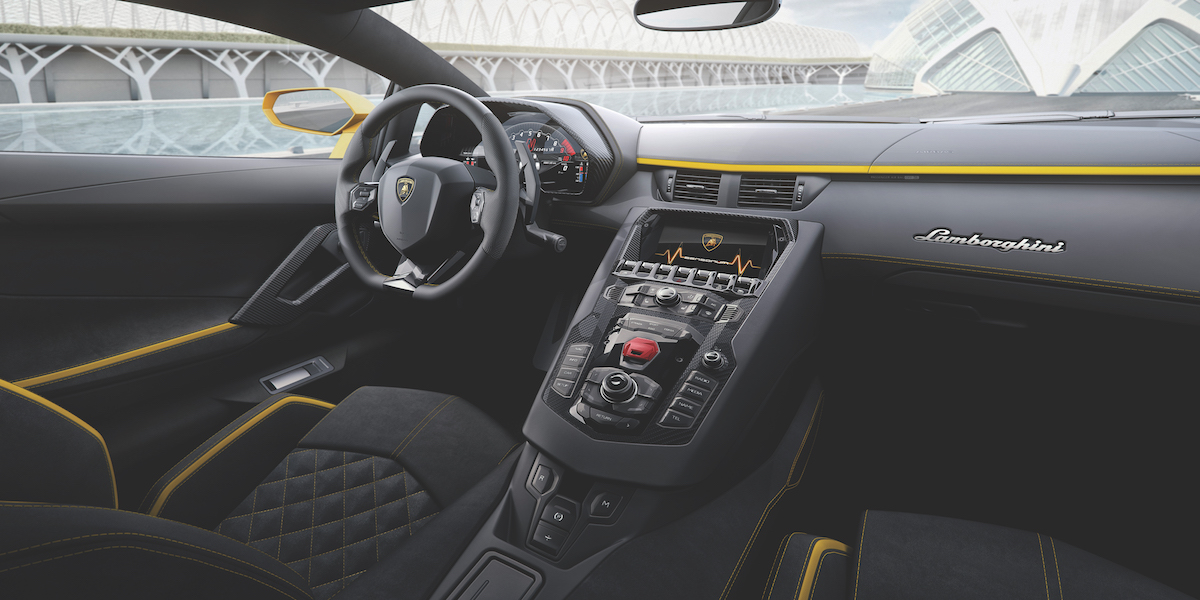 It’s still just as beautiful inside, with leather everywhere, a fighter-jet instrument display, and toggle switches for the main controls. It’s a pain to get into; it’s a pain to see out of. It has minimal storage, reversing it causes heart palpitations, and it’s wider than Saturn. Does anyone really care, though? It has scissor doors. Enough said.

The Aventador S is a proper Lamborghini. It’s brutally fast, looks like a spaceship, has a missile launcher for a start button, spits flames at night, and makes more noise than a Trump protest. At $788,914 before options and on-roads, it ends up being a near-seven-figure machine, but few sports cars can match it for pure theatre or desirability.

After spending a day at the track, Lamborghini has proved that, like the best pizzas in the world, the best sports cars are also created in Italy.