Ben Bayly has much to celebrate; not only has the chef, business professional and reality TV guest opened a new restaurant during a pandemic, but the new Auckland venue is a soaring success. Ben Bayly is a recognisable face and name in New Zealand’s culinary world. The chef, business professional and reality TV guest has not only mastered the art of cooking but has also run restaurants all over the world, including Australia, the US, France and, of course, New Zealand. His career also led him to be a judge on My Kitchen Rules New Zealand.

But fame is not the driver of his ambition, far from it. The pure experience of being in a kitchen and cooking is what motivated Ben open his new restaurant in Auckland’s CBD during a pandemic.

“Trying to be a good dad and a good chef at the same time is my greatest challenge.” – Ben Bayly

Ahi is a modern restaurant that celebrates the growers, harvesters, producers, staff and everything New Zealand.

“Our inspiration starts here,” Ben confirms. “We only use New Zealand ingredients, and we tell the story of our suppliers. It’s not a new thing that’s happening in New Zealand, but three or four years ago, no-one was doing that. 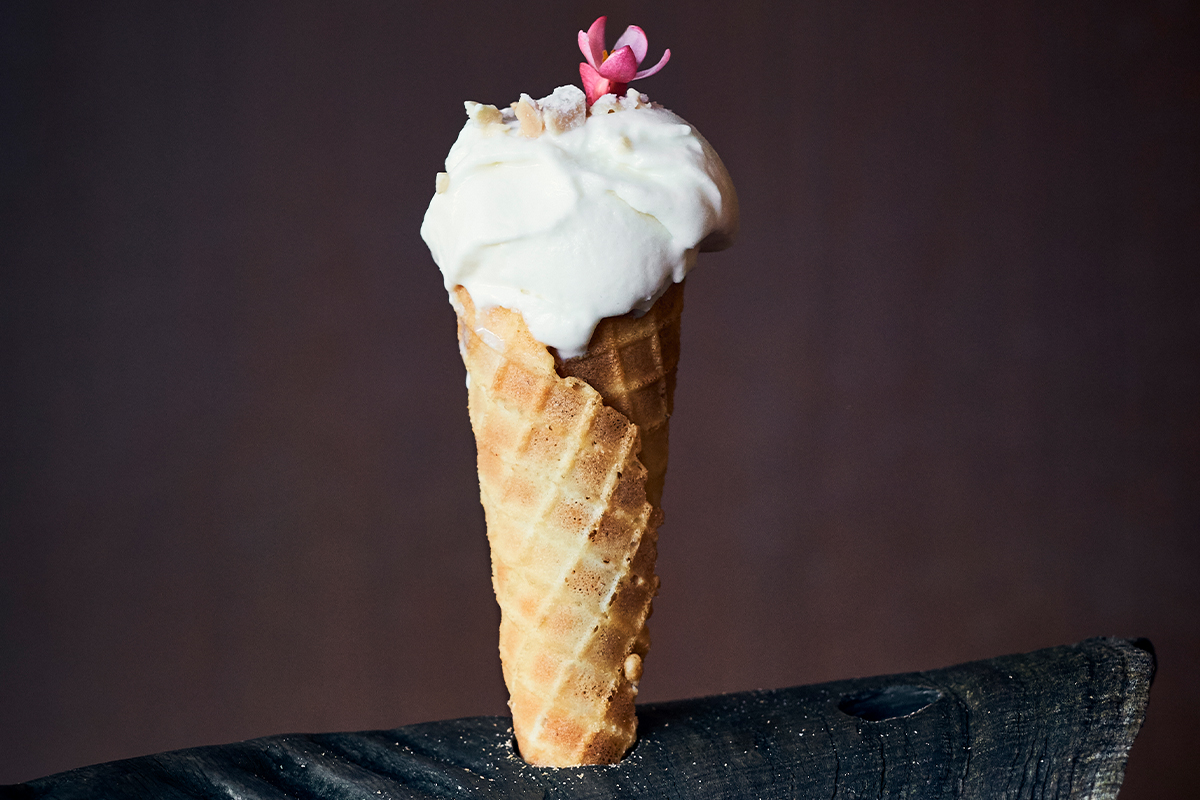 “I want to help define what New Zealand food is because New Zealand like Australia is very migrant driven. We’re a country of migrants,” Ben tells The CEO Magazine.

Appreciating native New Zealand ingredients and educating customers about the nation’s food history is the philosophy behind Ahi.

When creating the menu, Ben incorporated ingredients such as paua (abalone) and the chef’s favourite, huruhuru whenua – a type of native fern.

“I want to progress New Zealand food,” Ben highlights, “I want to stay cooking. I am a restaurateur, but I’m a chef first. I just want to have my apron on and a knife in my hand. “I’ve got three young children so, obviously, they’re foremost for me as well. Trying to be a good dad and a good chef at the same time is my greatest challenge.”

Ben’s story didn’t start in Auckland where he now has two successful restaurants (Ahi and The Grounds) and it didn’t begin in Arrowtown, a historic town in the Otago region, home to Ben’s and Sir Michael Hill’s Aosta restaurant.

Instead, it all started in a small farming town of Te Awamutu in the Waikato region, located on New Zealand’s North Island. “It is an awesome little town,” Ben reflects. This was where his passion for cooking started.

“When I was a kid and did home economics at high school, I had a great teacher who asked me what I wanted to be when I grew up,” Ben relays.

“I told him that I wouldn’t mind being a chef. So, he rang around some restaurants in my hometown and got me some work experience. My first job was as a washer.”

After washing dishes for his last two years of high school, Ben had caught the hospitality bug. He went on to do a cooking course and at the age of 19 moved to Australia where he got a job at a New Zealand catering company that helped cater for the 2000 Summer Olympics.

“I did that for four weeks and then I met George Calombaris and Gary Mehigan. I ended up working at Fenix with George, Gary, and Raymond Capaldi,” he says. “Ray Capaldi became like my dad. Gary and Ray took me under their wing and I spent two years in Melbourne.”

Next Ben moved to Las Vegas where he got a job in banqueting, before landing a position at fine dining restaurant Le Cirque. After two years, the young chef left to explore London and spent two years at Michelin-starred restaurant The Square.

“I want to progress New Zealand food. I want to stay cooking. I am a restaurateur, but I’m a chef first. I just want to have my apron on and a knife in my hand.”

“Then I went to France for a couple of years,” Ben tells me. “That was always the dream. I thought French food was the best and I wanted to learn the language as well.

“I worked at L’Atelier de Joël Robuchon Etoile in Paris and then Maison Jeunet, a place in the countryside, and then I did a ski season in Chamonix.” 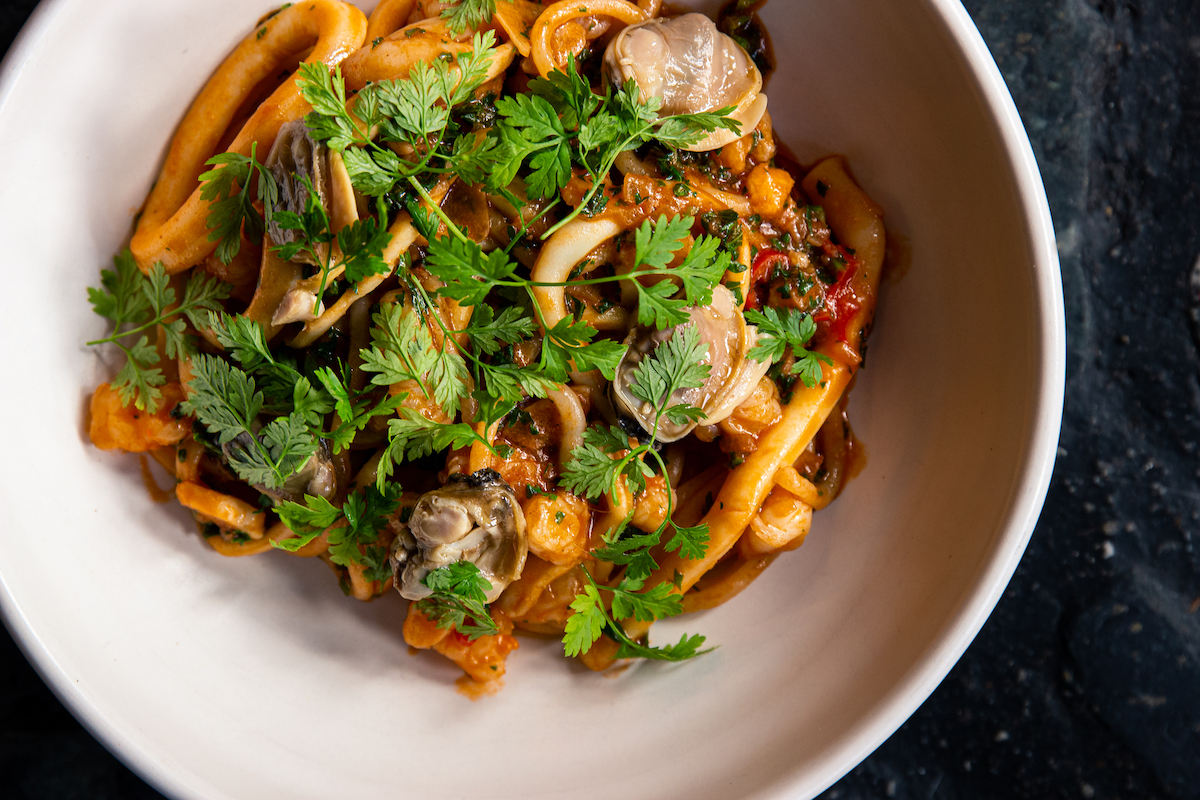 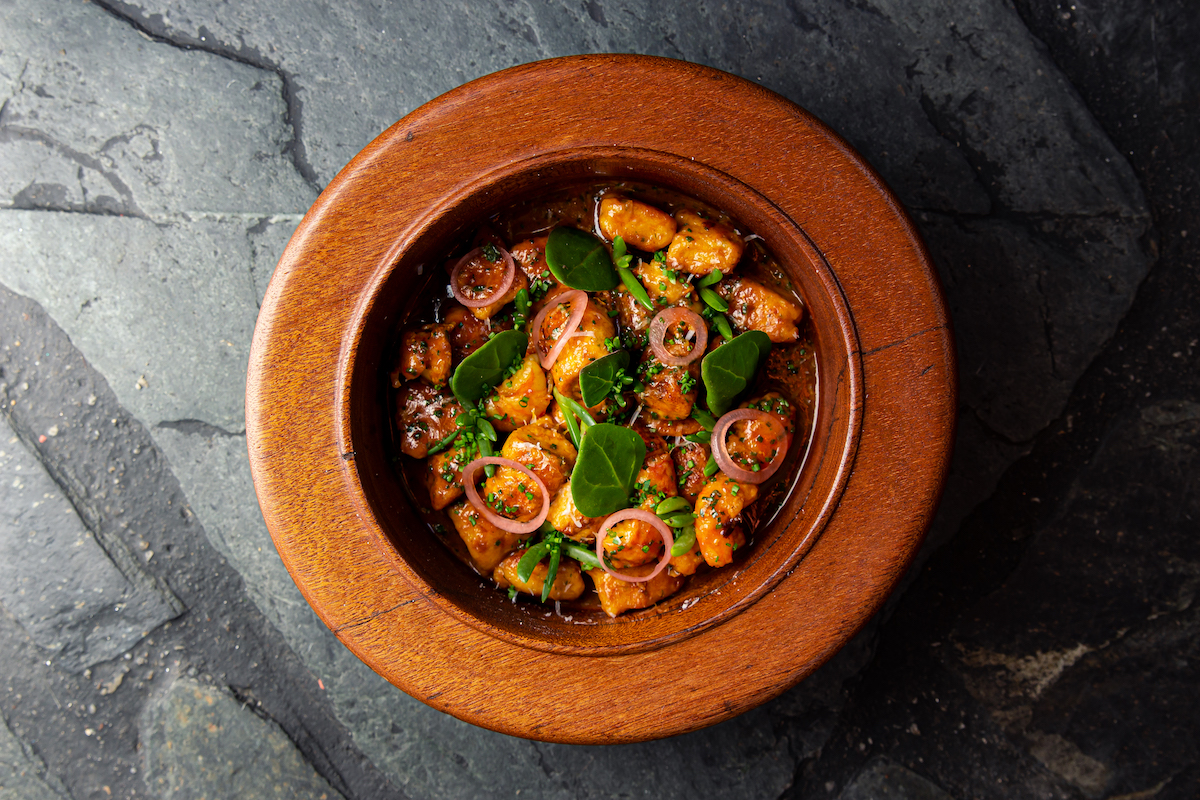 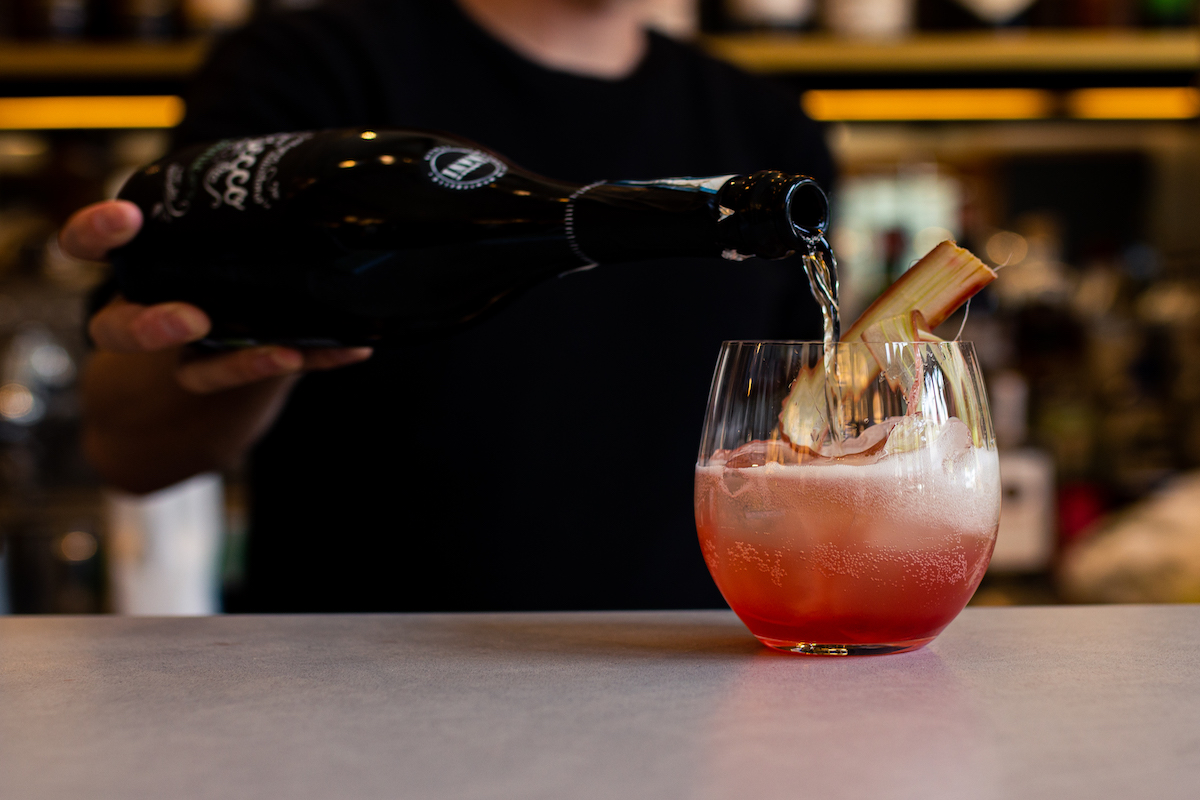 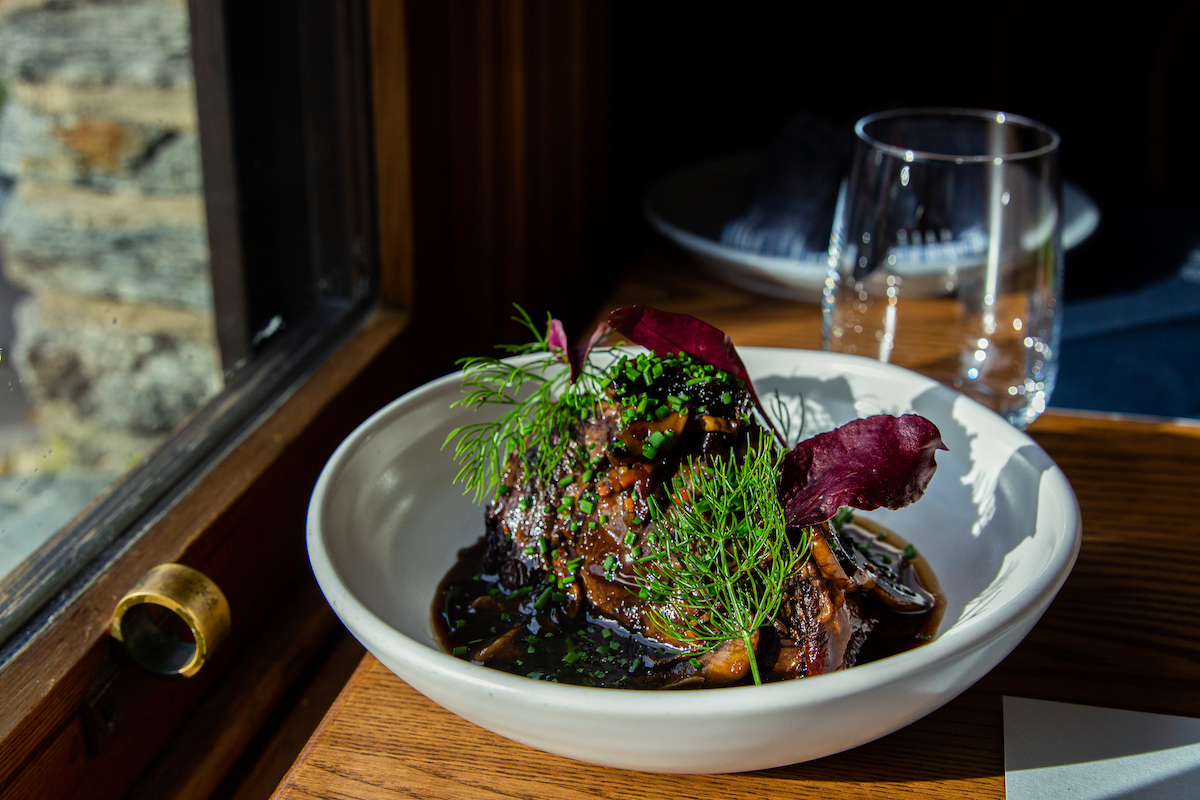 After two more years in London working at The Ledbury, Ben decided it was time to return home. He quickly landed at The Grove, a three-hatted restaurant in Auckland.

Ben says that when he went home, his cooking was inspired by what he’d learned overseas. But now after years of cooking and familiarising with all that New Zealand has to offer, the globe-trotting chef defines the menu at Ahi as “New Zealand food”.

“We see Auckland as a food destination like Melbourne, Sydney or San Francisco,” he says. “Aosta in Queenstown is inspired by north Italy, which has a very similar climate to New Zealand. While Ahi is very much all about the celebration of New Zealand.”

Ahi’s opening during a global pandemic has, unsurprisingly, come with much stress. Ben admits that it has been challenging. However, the impact of COVID-19 has influenced him, and perhaps many other hospitality owners, to be more humble and grateful, and not take customers for granted.

“It’s also made me a better businessperson,” he adds. “We have to run our businesses better; we have to prepare for a rainy day. A lot of restaurants work hand to mouth; staff live pay cheque to pay cheque and restaurants live week to week, but now things are changing.” As a young New Zealand chef, Ben was awarded Commis Chef of the Year 1999, National Youth Skills 2000, and received the Bill Gallagher scholarship at Johnson and Wales University of Culinary Arts in Providence, Rhode Island, US. Such accolades, opportunities and his journey have made Ben passionate about nurturing the next generation of chefs.

“I take that really seriously. I want to make sure that the young people I work with come away as better chefs and better humans,” he notes.

“You can’t underestimate how important your impact is on young people. If I didn’t have the right role models, I wouldn’t have got to where I am today.”