Celebrating the craftsmanship behind The Balvenie and Waterford

The age-old charm of creating a product from scratch was celebrated by The Balvenie Distillery at a whisky tasting emphasised by stunning glasses from Waterford Crystal, which is also the company behind the Times Square New Year’s Eve ball drop. The age-old charm of creating a product from scratch is fast becoming a forgotten craft, but for two Celtic companies with deep historic roots, it is their bread and butter.

Nestled in the small Irish harbour town of Waterford, founded by the Vikings in 914, Waterford Crystal is a glass blowing company with a rich, 235-year history specialising in creating beautiful crystal glasses as well as PGA golf tournament trophies.

Waterford brand ambassador and second-generation master craftsman Tom Brennan spoke of the importance of sustaining the unique crafts of bygone eras at an exclusive whisky tasting event presented by Waterford and Balvenie in Sydney.

Brennan explained to the intimate crowd gathered in one of the Art Gallery of New South Wales’ exquisite rooms that the dazzling ball, weighing more than 5,000 kilograms, was made up of 2,688 crystal panels and 32,000 LED lights.

“And 1.2 billion people around the world watch the ball drop and – for 10 seconds – we are the most watched brand on the planet,” he said. “When you consider Waterford is a small town in south-east Ireland, and yes, I am biased, we are one of Ireland’s greatest exports.”

1.2 billion people around the world watch the ball drop and – for 10 seconds – we are the most watched brand on the planet,” Tom Brennan

For the luxury goods company, which was founded by brothers William and George Penrose in 1783 when Beethoven’s first works were published, creating stunning, high-quality crystal to match with any beverage is something that continues to stand the test of time.

“We haven’t changed one thing about the Lismore tumbler since it was designed in 1952,” Brennan pointed out.

All the crystal ware is designed by craftspeople with many of the collections created using the same techniques as in 1783. However, Waterford collaborated with whisky connoisseurs to create the ultimate glass shapes to enhance the experience for whisky aficionados.

With experts designing the perfect vessel for your hand to cup, the Irish brand’s collection includes a Lismore Footed Tumbler, created to hold in the aromas through its tulip shape, and a Lismore Flared Tumbler perfect for swirling. 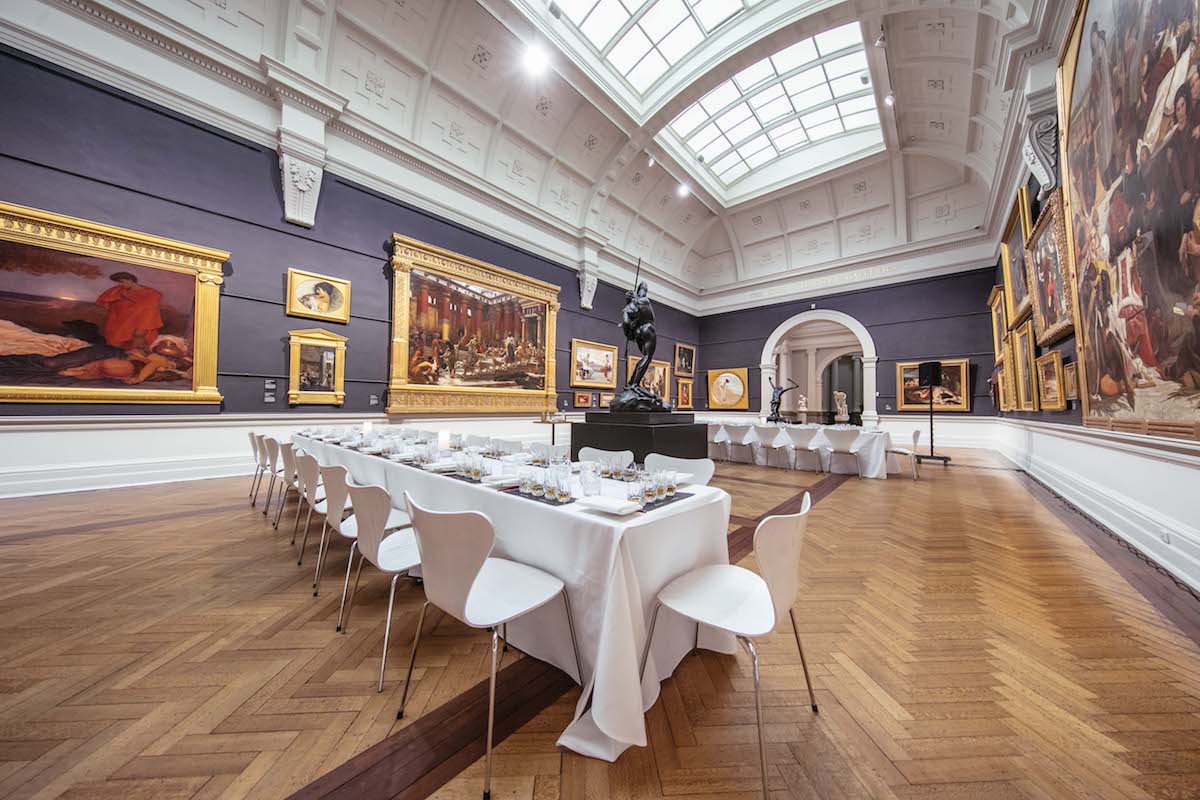 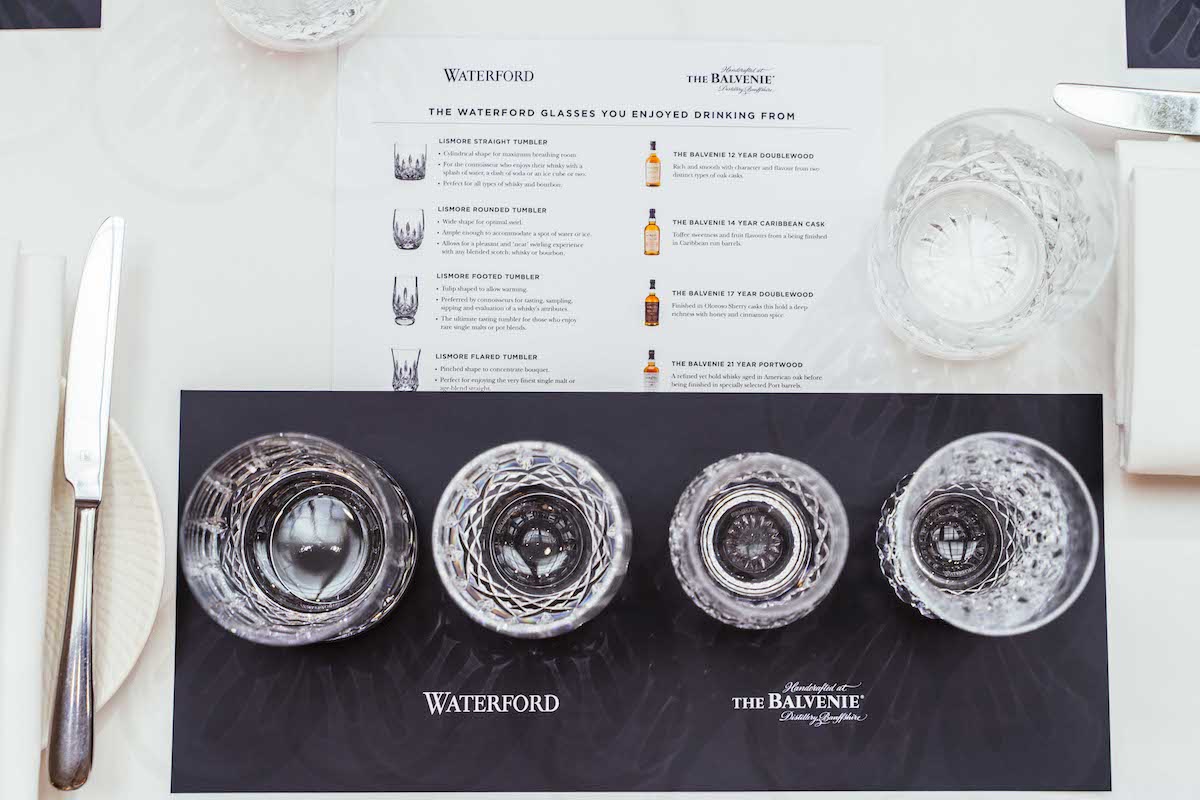 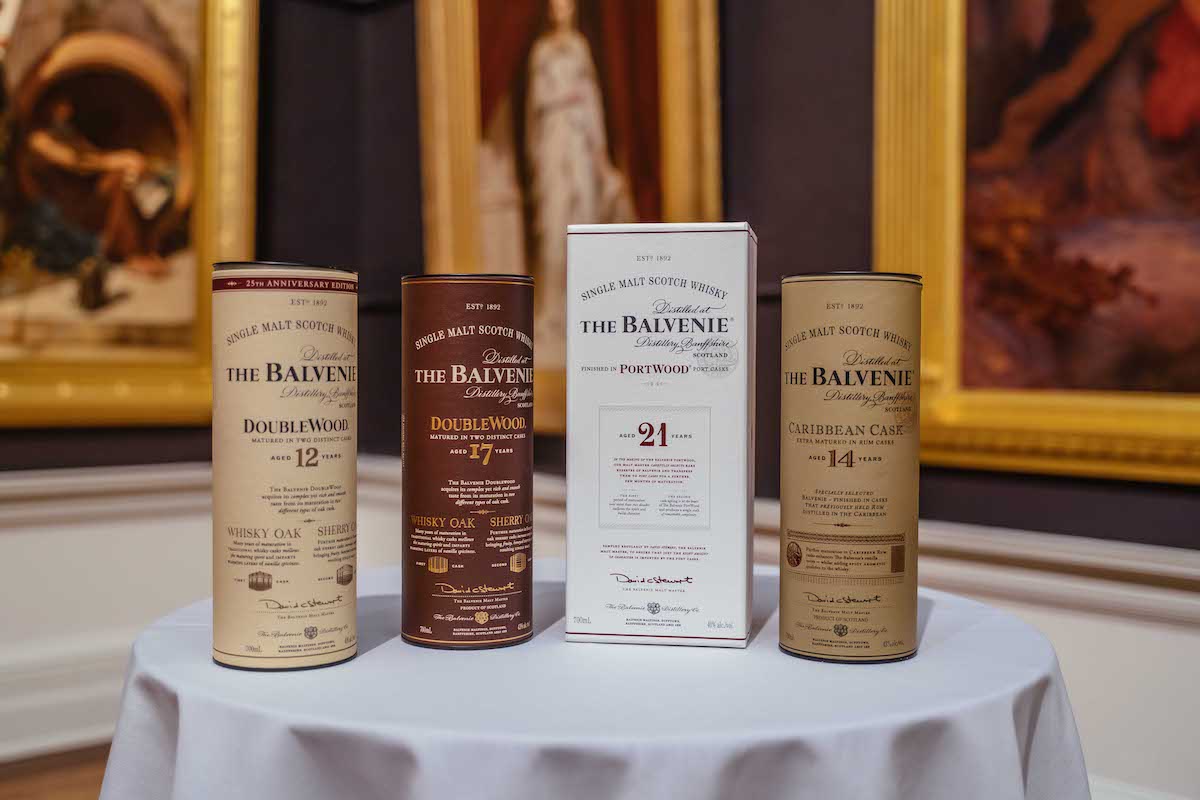 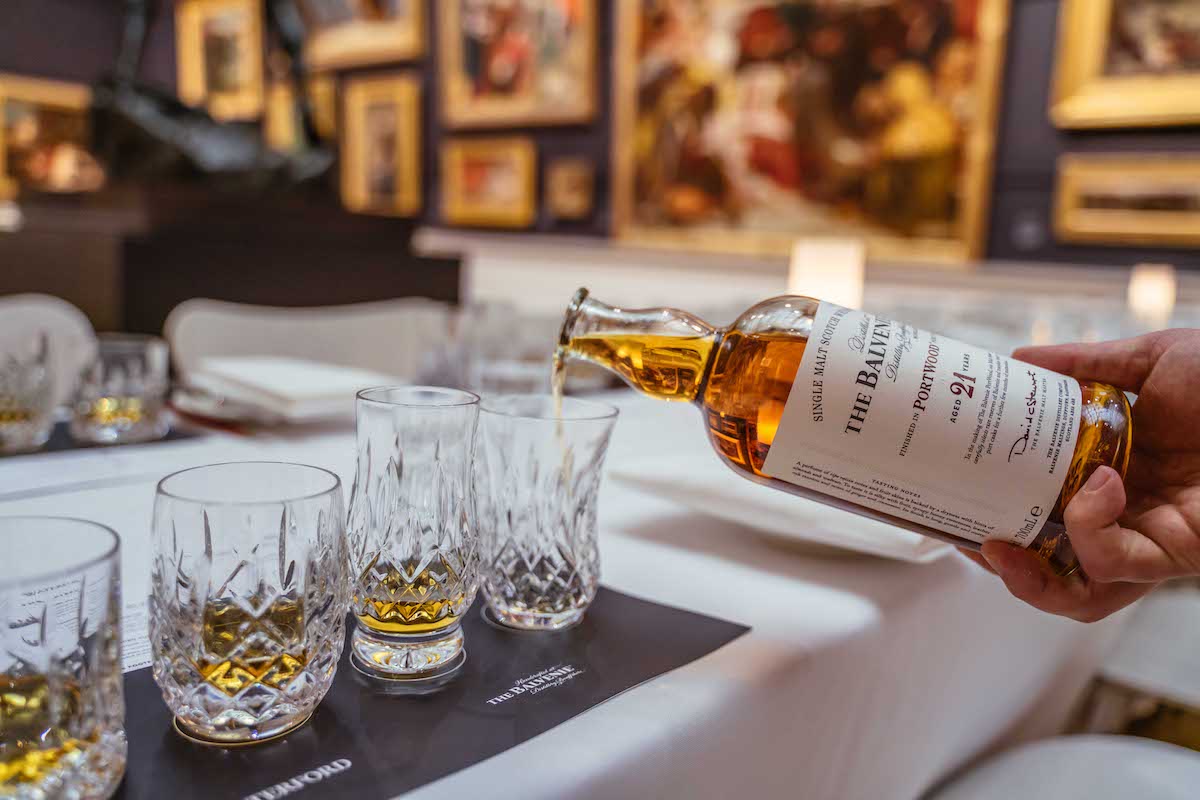 “It’s an experience to taste the whisky not just with your mouth, but as you hold the glass … you experience more than the actual physical taste,” Brennan said.

The invitees got to sample four of The Balvenie’s finest single malts, their effect amplified by the beautiful handcrafted crystal glasses and the elegant setting – one of the art gallery’s stunning rooms with historically significant paintings depicting events the two Celtic brands had experienced firsthand.

The Balvenie’s Australia and New Zealand brand ambassador Ross Blainey explained why the two brands worked so well together. “There are so many synergies between what we do and what Waterford do,” he said. “What it boils down to is the craftsmanship; what it takes to make something properly.”

Scotland’s national spirit is infused with layers of intricacies, much like The Balvenie’s own 126-year history. Malt master David Stewart was awarded an MBE in 2016 for his services to the Scotch whisky industry.

Stewart is recognised as the longest serving malt master in the industry and has been with Balvenie for 56 years. He is now passing on his skills to apprentice malt master Kelsey McKechnie.

“There’s some things you can’t learn from reading a book or watching a YouTube video,” said Blainey. “It takes a long time of learning and experience to make something like this.”

It takes a long time of learning and experience to make something like this,” Ross Blainey

Described as a legend at the distillery, Stewart is an industry pioneer for inventing whisky with a cask finish – The Balvenie 12 Year Doublewood, which was first released in 1983 (originally named The Balvenie Classic and renamed in 1993).

After being aged in two different barrels, the liquid gold oozes flavour, making it a popular drop which celebrated its 25th anniversary this year, flagging an important milestone in the company’s history.

“I don’t know of many other whiskies that have gone 25 years without being changed at all,” Blainey said. “Since 1993, we haven’t changed anything about it, we’ve kept it the same.

“It’s a synergy with Waterford, we liked it back then, we still like it now. There’s no need to change it.”

The whisky business is imbued with tradition at every stage, from the barley grown by the same family for four generations to the full-time coopers who make the barrels used by the malt master, where Stewart is the company’s fifth malt master in 150 years.

“We’re the only distillery in Scotland which still practises all of its crafts,” Blainey said. “We have a real tradition in doing what we do … we’re making whisky with experience, knowledge and passion, and we’re doing it properly.” 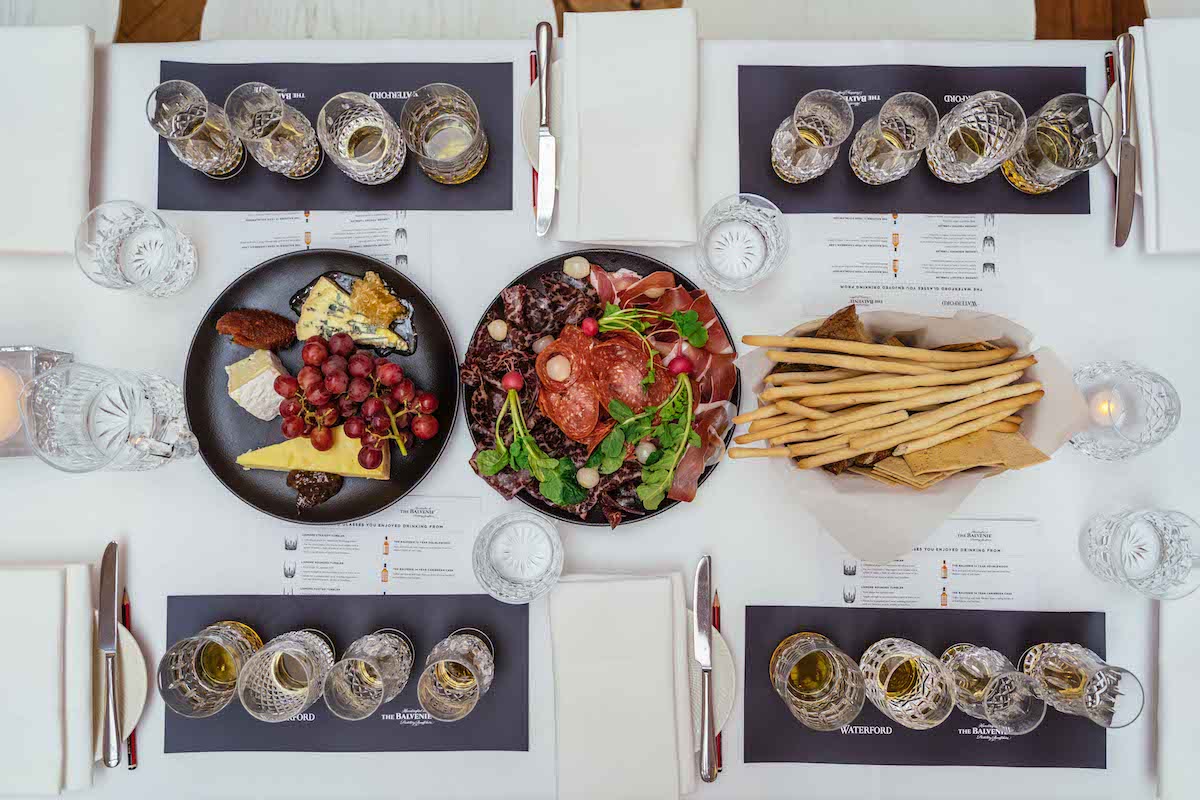 Whisky food pairings is not something that often jumps to mind like wine and cheese but it is a concept gaining momentum.

Blainey took an intimate crowd on a tantalising whisky tasting journey at The Luxury Syndicate’s Waterford Whisky Masterclass in Sydney, sharing his wisdom on pairing the golden drop with food.

All served in stunning Waterford crystal tumblers, and paired to suit each Balvenie spirit, the samples packed a powerful punch of intricate flavours starting with The Balvenie 12 Year Doublewood.

Aged in two timber barrels, in an American oak cask for 12 years, and then in a European oak barrel, the process adds different characteristics to the whisky, which is bursting with a rich and smooth honey sweetness.

“The Lismore tumbler cups your hand, it feels good and is designed by whisky connoisseurs, so they’re telling us how to hold the glass,” Brennan said. “What actually happens is your hand warms the drink inside so it tastes better and has a different texture.”

Perfectly paired with prosciutto, the saltiness cuts through the sweet tipple, demonstrating the power of marrying sweet alcohol with salty food.

The Balvenie 14 Year Caribbean Cask drop is finished in a Caribbean rum barrel to infuse the whisky with the rich sweetness of rum, creating the essence of toffee and fruit flavours.

The liquid gold is aged in an American oak barrel for 14 years before being moved to a barrel which once held Caribbean rum, allowing the rum to influence the whisky, which is ultimately paired with aged cheddar cheese. 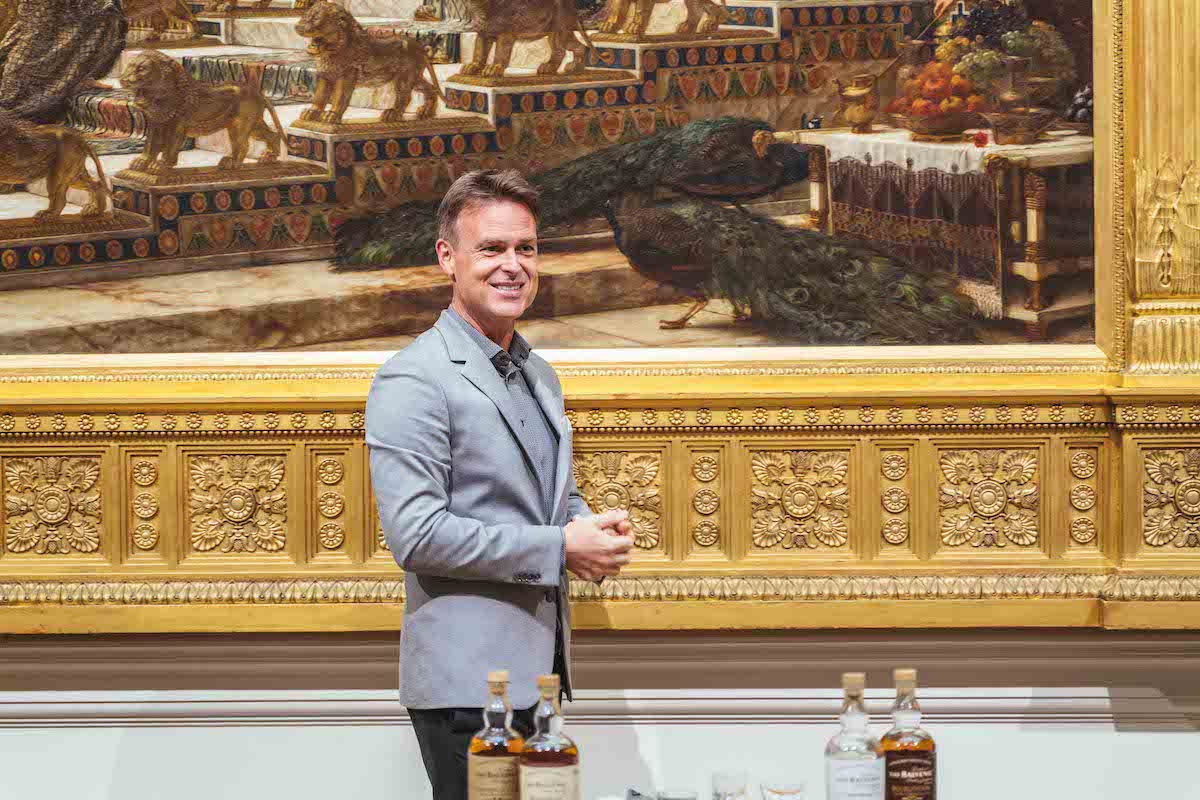 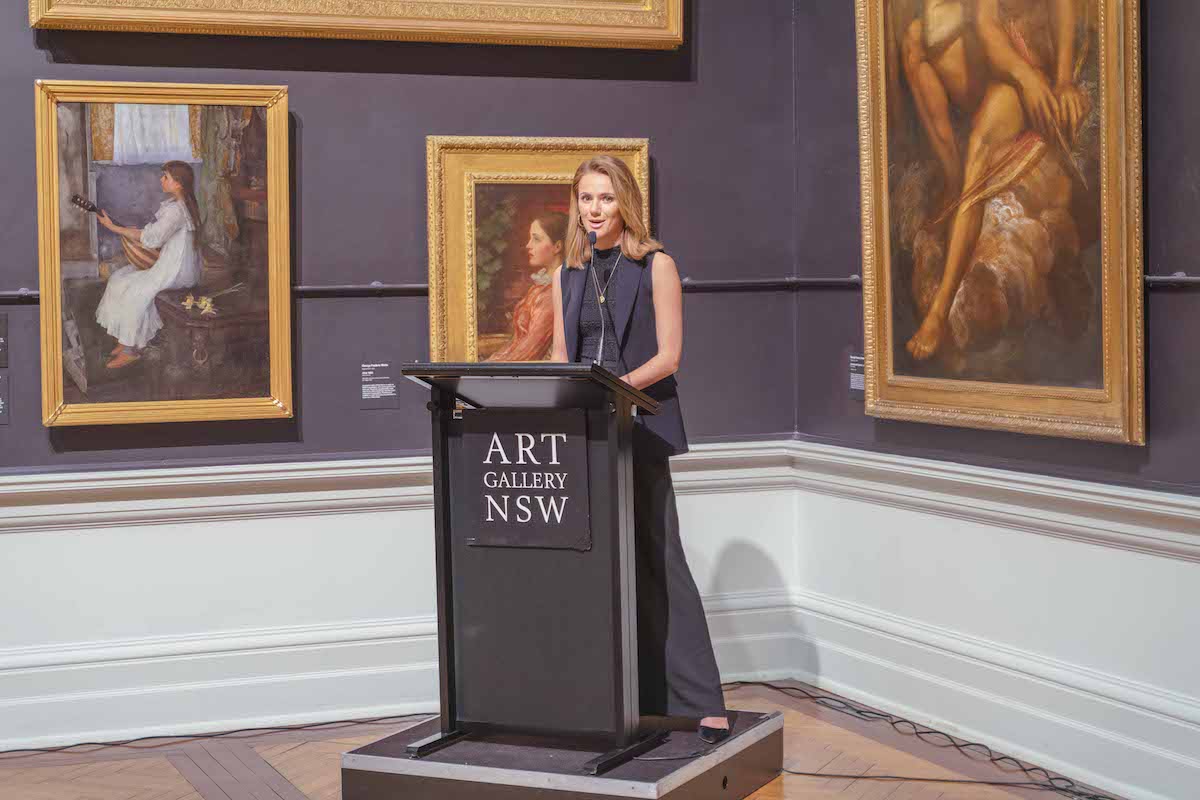 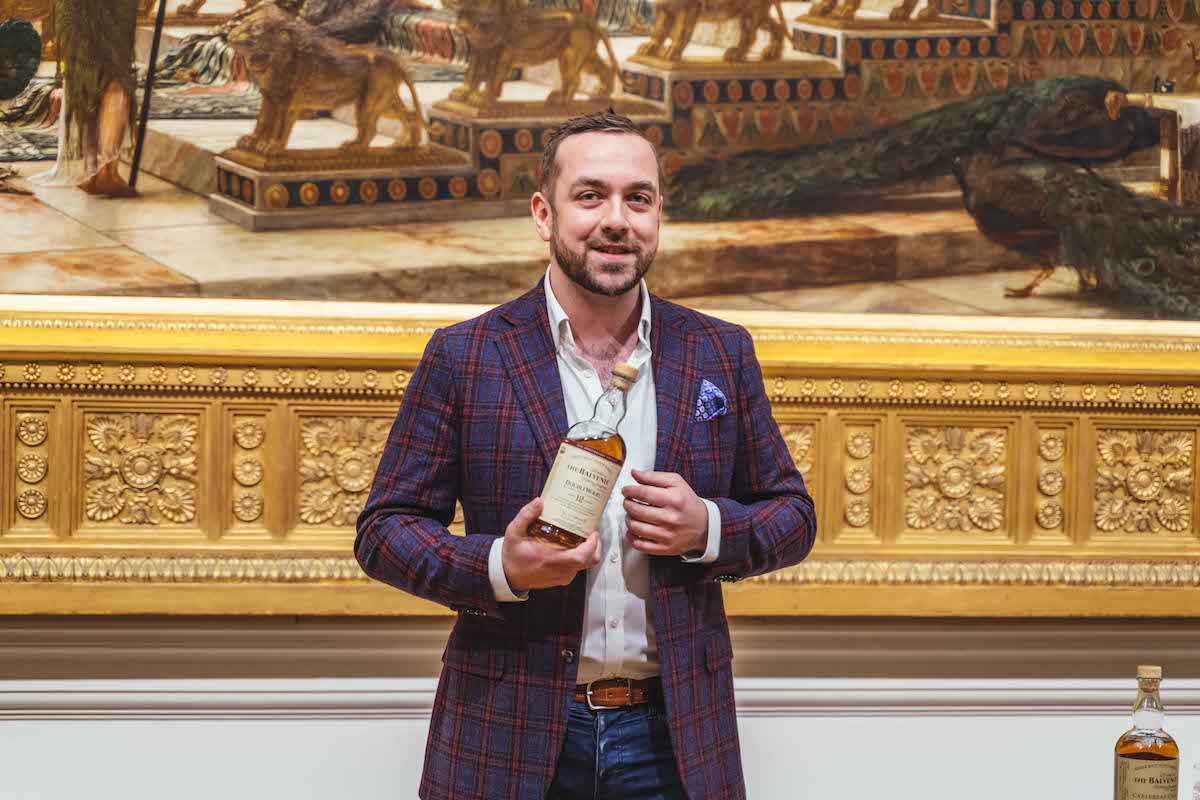 After spending 17 years in an Oloroso sherry cask, The Balvenie 17 Year Doublewood mellows out and carries a deep richness of honey and cinnamon spice.

Ending the tasting on a high, The Balvenie 21 Year PortWood packs a refined, yet bold, punch. Aged in American oak, the velvet drop is cask finished in a specially selected port barrel and was enjoyed with a creamy Brillat-Savarin.

The tastings were all heightened by the whisky connoisseur-designed Waterford tumblers. Brennan believes if you spend an extra few dollars on a nicer drop of alcohol, you should enjoy it in a quality glass.

“Surround yourself with the best things you can have,” he said. “It’s about lifting yourself up.

“Surround yourself with the best things you can have.”

“One thing I always say is that you can use your Waterford any day that ends in a y. Celebrate the good stuff in life and have the best you can.”