The boutique chocolatier has had a whirlwind past five years, but it has its sights set on a bright future. Watching in awe as koalas jump between branches of a eucalyptus tree, potoroos snack on corn and peanuts, and sleepy tammar wallabies slowly rise for their breakfast – a zoo doesn’t seem an obvious location for Koko Black to launch its latest collection.

In reality, it couldn’t be more appropriate. The beloved chocolatier has spent the past five years working tirelessly to cement itself as iconic Australian brand. And there’s no better way to celebrate its new look than with another Aussie icon: Taronga Zoo.

“Think Australian wine, think whisky, think coffee, then think chocolates,” Koko Black owner Simon Crowe said at the Sydney launch. “The new world – and it is the Australian way – has taken and redefined these categories across the globe.

“The Australian ethos, the lifestyle, the spirit and the attitude has really permeated a lot of food and all consumable products in a way that has reinvented the categories.

“Koko Black has now earned the opportunity to break the mould in the chocolate factory.”

Striving to have a greater impact and purpose in life, the artisan chocolatier – which is 100 per cent natural and free from artificial colours, flavours and preservatives – is much more than a confectionery label.

“We want to turn the world of chocolate upside down.” – Simon Crowe

By sharing the flavours of Australia with the world while also giving back to the country, the partnership is a first for Koko Black, which hopes to benefit the Taronga Conservation Society Australia. The union is even more vital following the devastating Black Summer bushfires of 2019 and 2020, which saw almost three billion native animals killed or displaced.

“Like Taronga Zoo, Koko Black is 100 per cent Australian owned and made,” Simon said. “Our purpose is linked to celebrating all things Australian. We’re thrilled this partnership allows us to support Taronga’s endeavours to save vulnerable and iconic Australian species by continuing their vital conservation work including rehabilitation, habitat restoration, breed-and-release programs and monitoring wild populations.

“We want to turn the world of chocolate upside down.” 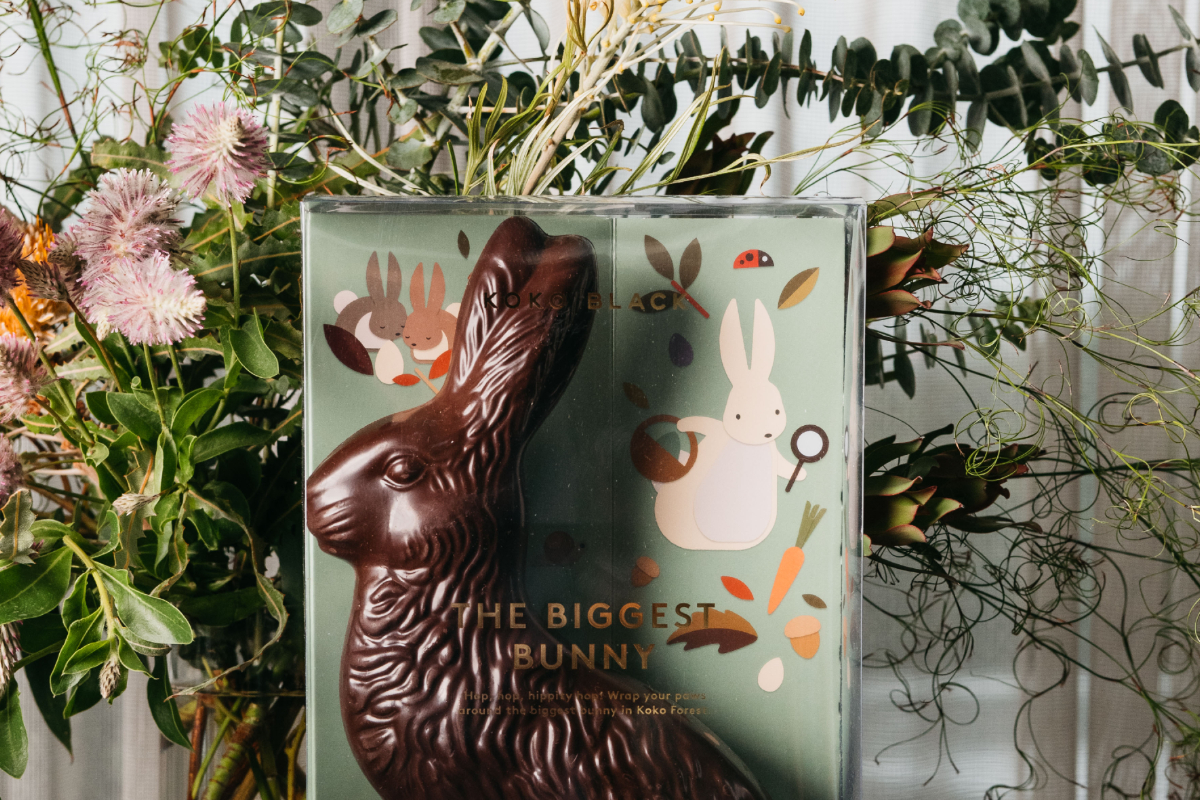 The first store was born at the Royal Arcade, which boasts chessboard floors and sweeping 1880s Victorian ceilings, making it feel like you’ve been transported to Europe. Whether you choose to peruse the endless cabinets filled with rows of handcrafted pralines or wander up the winding staircase to the cosy café, where you can lounge in a Chesterfield wingback while you sip on its famous hot chocolate, the allure of Koko Black’s original boutique is an experience not to be missed.

While the brand was established as a traditional European chocolatier, it has since been given a new life, infused with an outback charm to produce wondrous creations.

Koko Black has a brighter future today than ever before, although it wasn’t that positive five years ago.

“The business was in turmoil,” Simon admitted. “I bought the business out of administration.

“It went into despair only because the previous owner – a friend of mine – didn’t get the foundations of the business right.

“For the first two years we owned the business, it really was in a position of pause; at best we were holding neutral, but we were probably going backwards.” 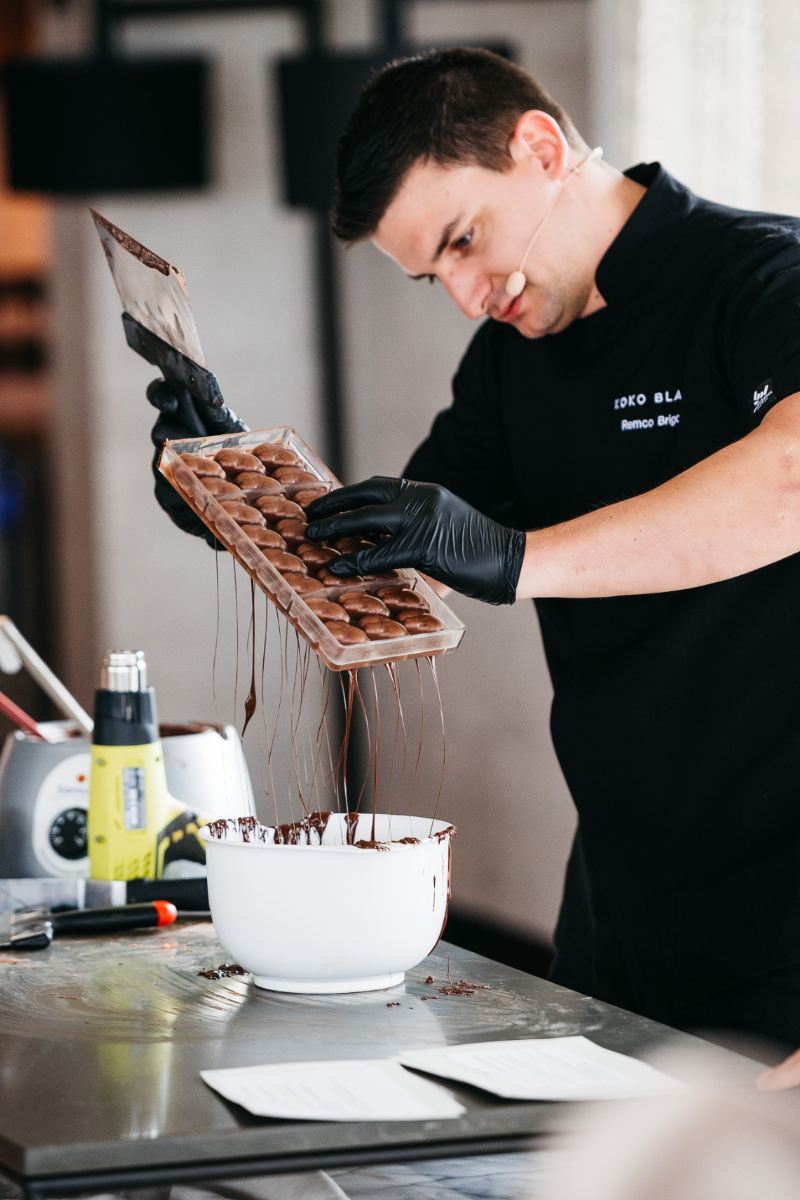 The businessman, who also owns Grill’d, knew the passion was there and the product was of high quality, making it a worthwhile company to save.

“I got taken through the production facility in Coburg in Victoria where all the products are made by hand and it was like Willy Wonka,” he recalled. “There were people everywhere, machinery was almost non-existent, and everything was handcrafted.

“When you buy a business and you look under the covers, you realise there’s not as much there as you thought there might be. Systems, processes, machinery, equipment – the infrastructure of Koko Black was not where we wanted it to be.”

After implementing new structures, appointing Head Chocolatier and Product Innovation Manager Remco Brigou from Belgium and CEO Nicolas Georges in 2019, Simon has put the brand in a position to revolutionise the chocolate industry.

“Sometimes it takes an insider to have an outsider’s perspective,” the owner said. “Remco and Nick are both European … and while they’re classically trained, they’re challengers of the status quo, and that’s certainly consistent with the Koko Black brand.” 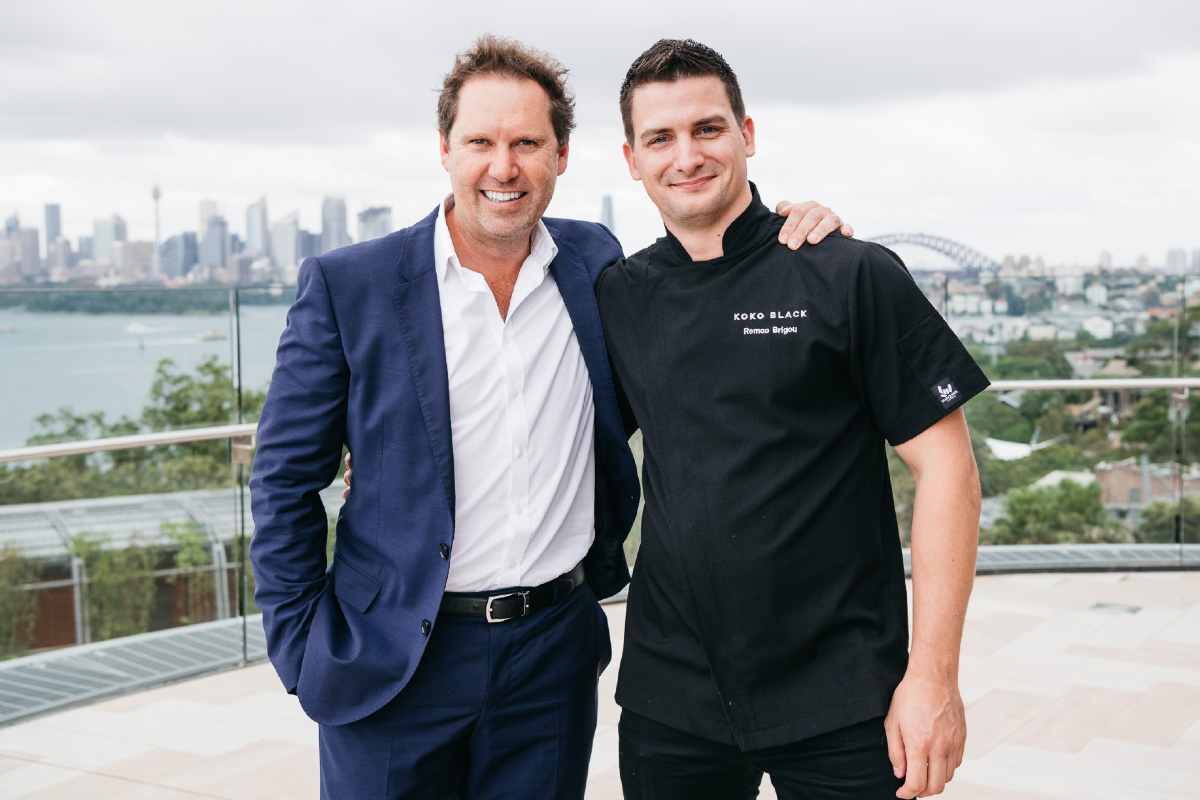 Having started its journey as an innovative, modern business, Koko Black continues to thrive as a premium artisan brand.

It currently has 15 stores across the country, with plans to open five additional stores in 2021 – three in Sydney, one in Melbourne and one in Perth.

The thriving new business model isn’t going unnoticed by other leading companies, with Qantas, Penfolds and Crown all wanting to partner with the chocolatier.

“She’s a small business but she’s a bigger brand than the business actually demands,” Simon said. “If we’re forward looking around product and brand, then by default success will come on a commercial base.”

Aspiring to infuse the handcrafted chocolates with unique indigenous ingredients sets the brand apart on a global scale.

And it’s just the start of the exciting offerings the chocolatier will invent. 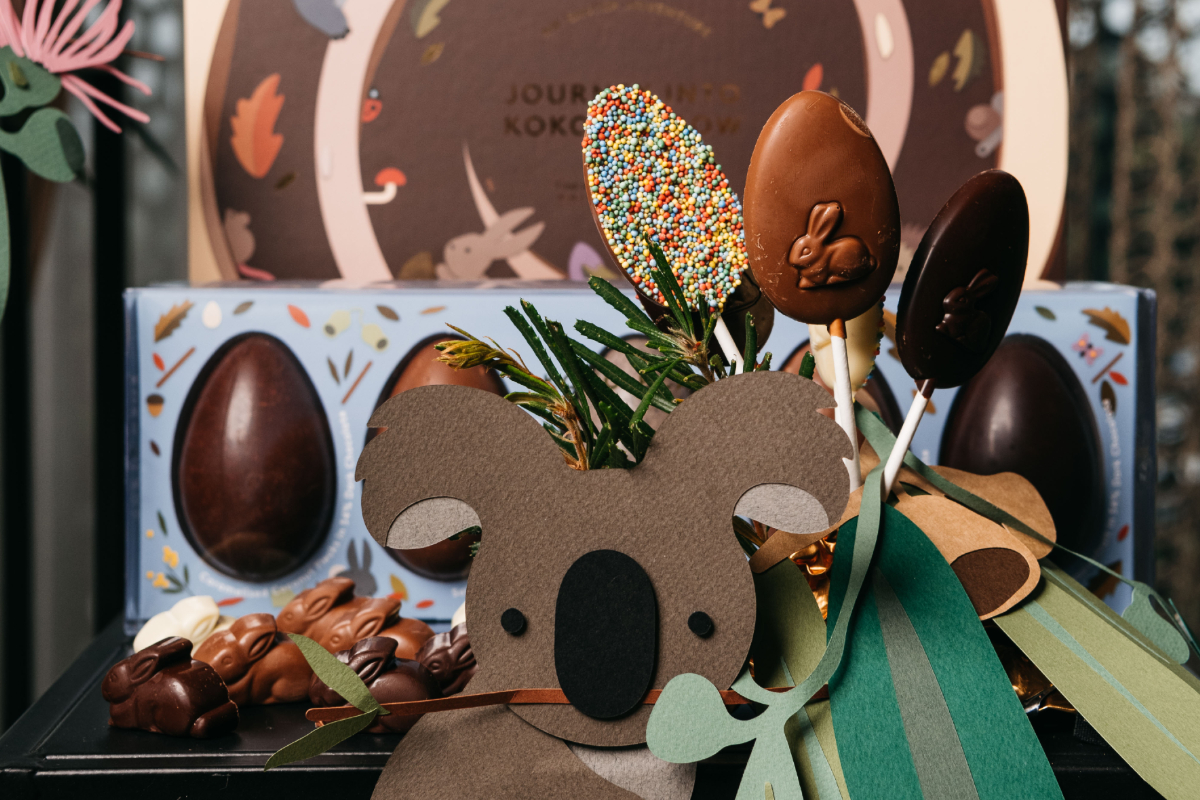 A Koko Easter is filled with Australian influenced sweets 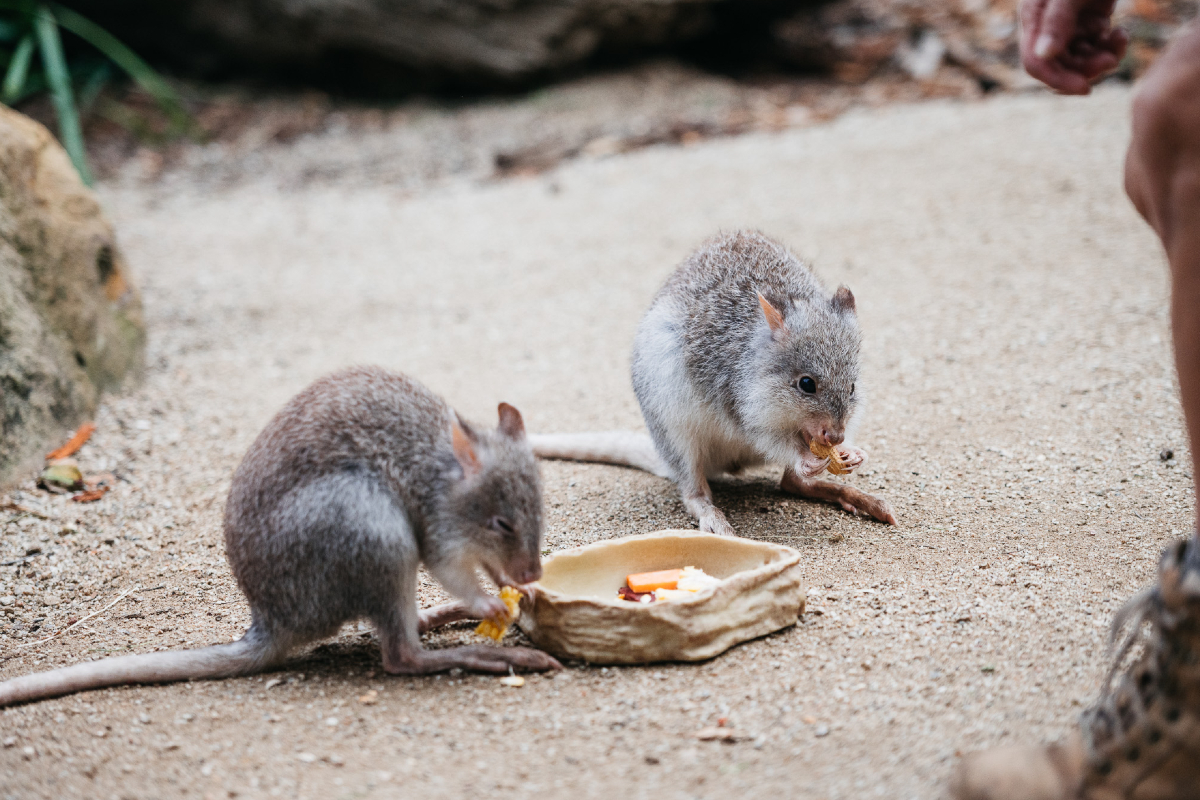 With Easter right around the corner, the festivity created the perfect occasion to launch some truly Australian products with greater purpose.

“Our Australian Critters range will be linked to how we celebrate the platypus, echidna, koala and Tasmanian devil,” Simon said. “All of those animals are much loved, but are in danger of extinction.

“Koko Black partners with the likes of Taronga Zoo to help those animals and make the population sustainable for generations into the future.”

The Easter collection also offers a new innovation for the brand: its official ‘vegan-friendly’ range. While high-quality dark chocolate is typically plant based, the artisans have taken it a step further to captivate even more chocolate lovers this season.

To think the brand was facing its demise just five years ago, to now being in a position where it can support other ventures for business with a higher meaning – it’s a remarkable progression that’s not lost on the owner.

“I love the brand, that’s why I invested in the business,” Simon said. “There’s now a very clear pathway to profitability. Coming back to what counts – product and brand – are the pillars fundamental to our future success.

“I’m incredibly proud that it’s a turnaround business, moving from turnaround to growth.”