Gerard’s masterpieces have won the hearts of Dolly Parton, Simon Sinek and Angela Ahrendts, and now she’s destined for success in the NFT space. 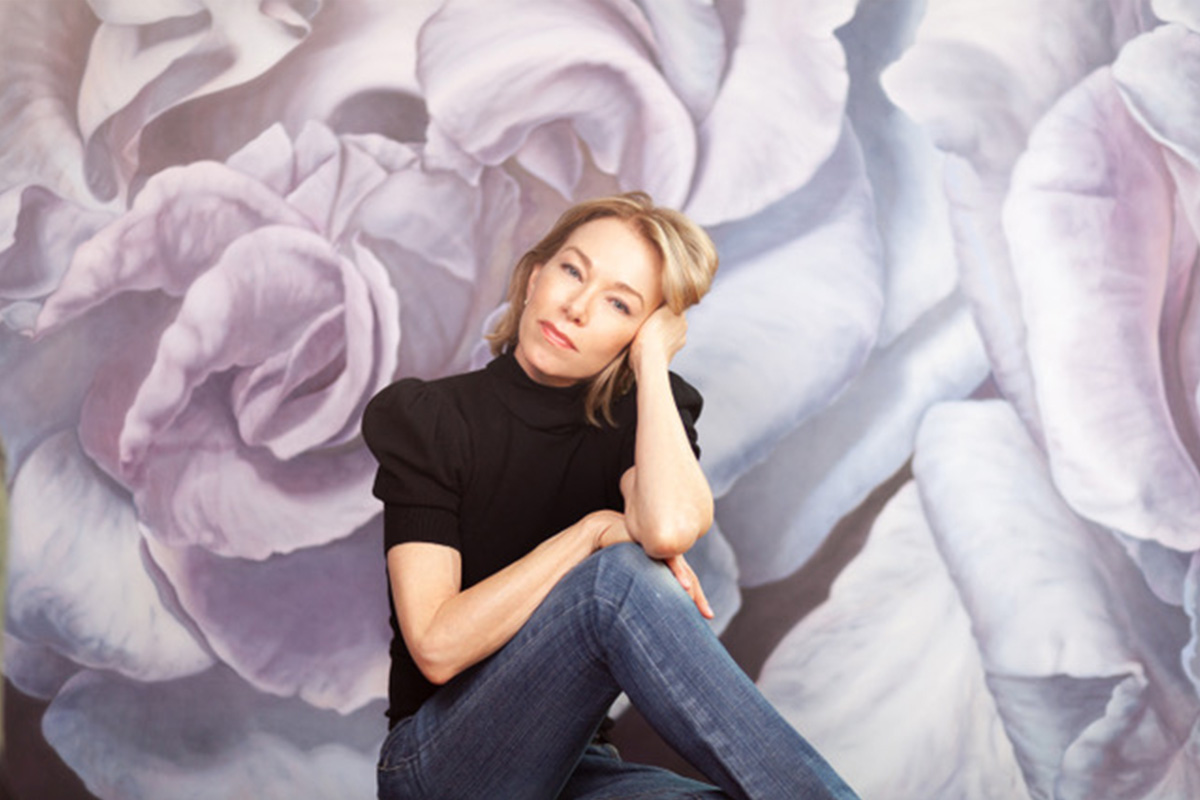 Ask any art school graduate whether they’re working as a full-time professional artist and they’ll most likely tell you how difficult it is to crack into the industry, or that they’ve found a job as an art teacher. It takes a special breed of human to continue on this path and Carin Gerard is one of them.

“I started my artistic journey quite young because my mother was a painter and my father was an architect, so I was always in a situation where there was a studio,” she shares.

“Sadly my mother passed away when I was eleven, so I thought that [painting] was a way to carry on her legacy and it was something I could do relatively well by that age.”

After completing her formal training in classical realism in Florence, Italy where she learned the techniques of the old masters, Gerard secured her first gallery representation at the John Pence Gallery in San Francisco. “He was very classical, so he only took very classically trained artists. I felt really honoured to be grouped with that calibre of an artist,” Gerard says.

“It’s hard to break in initially when you’re young because you’re trying to figure out how you can just do your painting, but eventually it kicks in and it does happen.”

During her early years at the John Pence Gallery she was one of only very few women and would be careful to only sign with her last name. “I didn’t want anyone to know if it was male or female who created the piece,” she admits, not wanting her gender to play a role in an investor’s decision-making.

From classic to contemporary 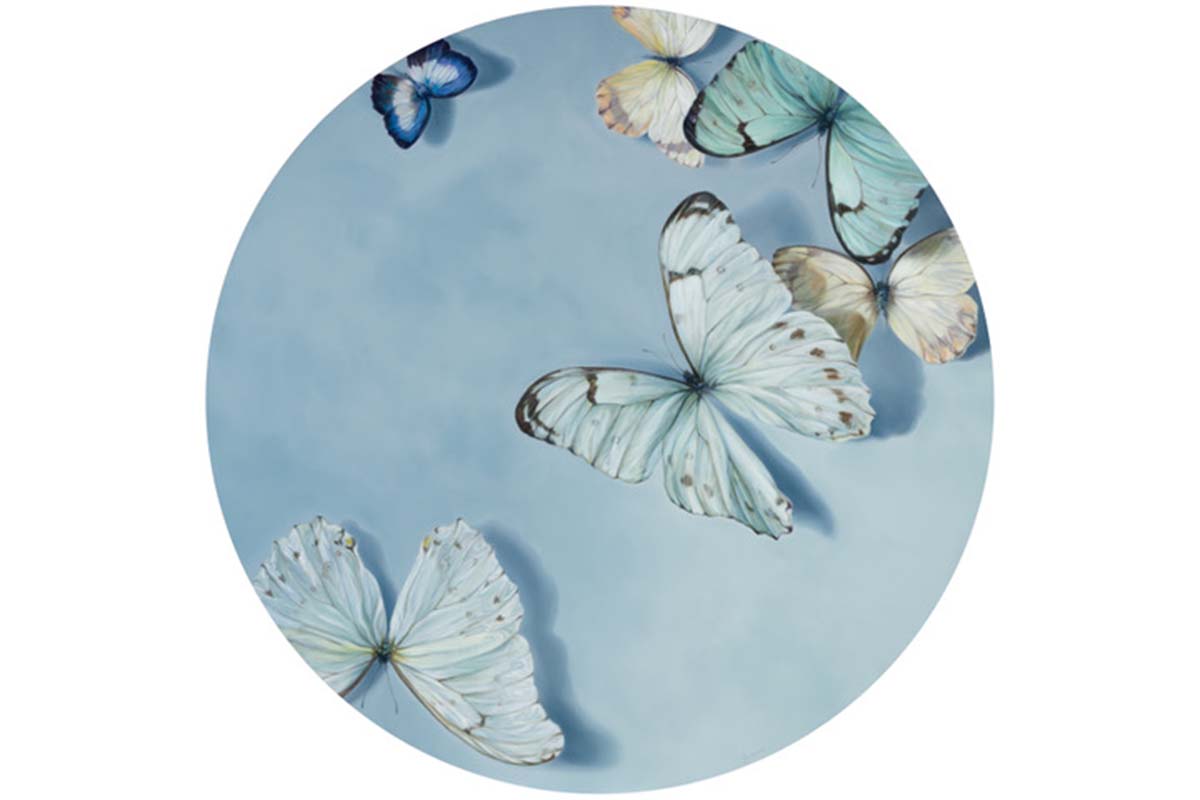 As Gerard continued to master her craft, her practice began to lean more towards contemporary realism, which she was able to explore wholeheartedly through representation at SCAPE Gallery. At that stage John Pence had retired and alongside that her appeal for classical still lifes.

“I don’t paint realistically in terms of colour. I let my imagination take over and doing that gives the ability to paint beyond the boundaries of what is classical,” she explains. “I like florals that I can make very three dimensional, that have a lot of body and are round – typically like a peony or a gardenia or a really round garden rose, but they need to have volume.”

While experimental in terms of scale and colour, Gerard’s rare skill set in today’s fast-paced world has been honed through decades of dedication to a structured process and consistent schedule.

“I’ve been on the same path. I approach a painting the same way I did twenty years ago,” she says.

A sketchpad in hand since she was a small child, the artist’s journals are a testimony to her relentless attention to detail.

“If I’m going to be doing a flower I have to source it and get the flower from wherever it is,” she says. “So I have to source them, then I have to photograph them, sketch them and out of all those I get one or two or three that are really worthy to paint, so I’m not making anything up.”

Gerard tells The CEO Magazine that 200 peonies she ordered from a Hawaiian company are scheduled to arrive in June.

“I think through the process of working with really beautiful materials living in Italy I got kind of spoiled and I can’t use materials that aren’t of the utmost integrity,” she admits. “I think it’s really important to work with the best you can do.”

Her handground oil paints and high-quality linen bases are acquired from reputable suppliers in New York while her journals and brushes are tokens from her annual trip to Florence where Gerard works from her atelier.

“I get my brushes there, I get my journals there, so every day I’m writing or working with a piece of Florence,” she shares. 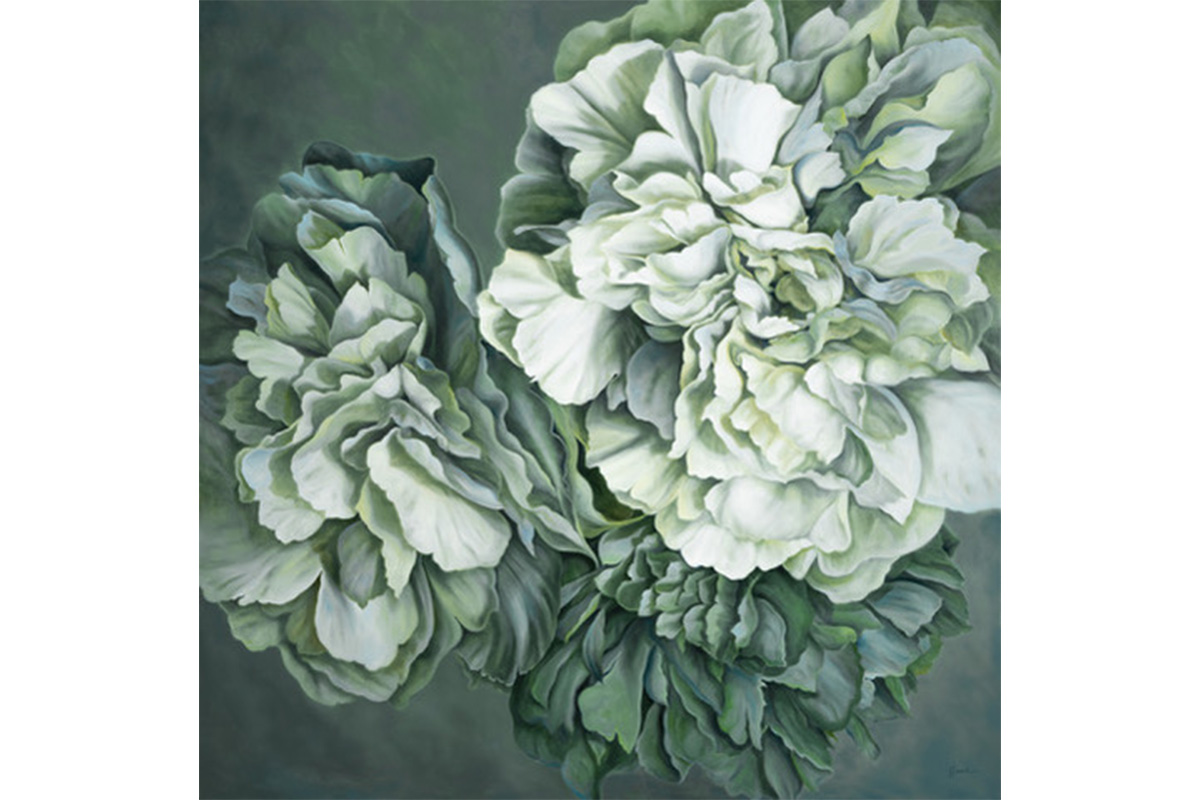 It was while Gerard was painting a large tulip in her Montecito California studio one day that her gallerist exclaimed, “Oh my God, you’ve got to go big!”

“Once I started painting big it felt so much more monumental,” she admits. “ I have to get up on ladders to paint them, but there’s something really powerful about that. I love the scale.”

Ethereal and peaceful, Gerard’s butterfly and floral compositions have an otherworldly appeal to them that has captured the imaginations of big tech CEOs and motivational speakers, including Angela Ahrendts and Simon Sinek.

How does she cope with the pressure to impress and deliver what her clients want?

“I interact with the clients a lot,” she says. “They might ask for more of a specific colour and that’s really hard because I’m not seeing it that way, so I have to find that gentle balance between what they want and what I want.”

While Gerard exudes a serene and gentle demeanour that you’d expect from an artist who depicts the subject matter of dreams, she’s also fiercely ambitious.

A new chapter in NFTs 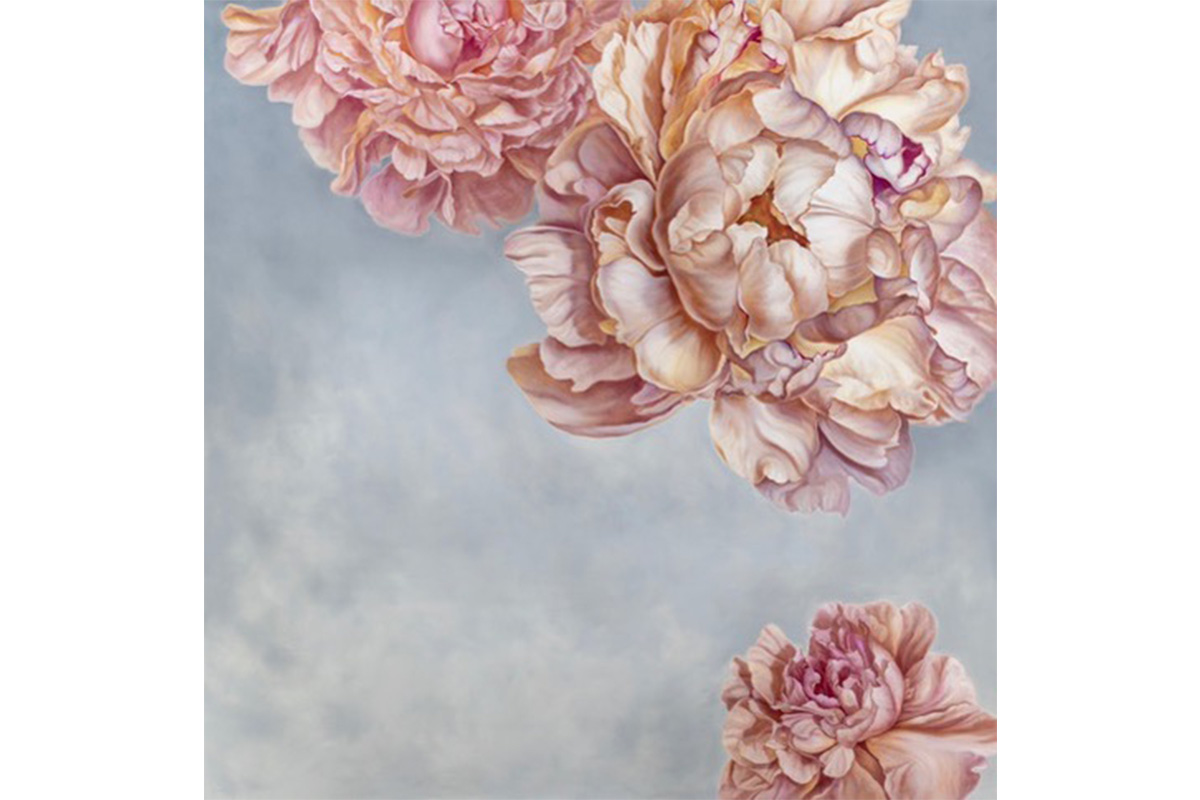 It’s no surprise then that she’s currently setting herself up for success in the male-dominated NFT realm thanks to her nephew Noah Davis, Head of Digital Sales at Christie’s. Davis is best known as the organiser of the US$69 million sale of Beeple’s Everydays and the company’s NFT expert.

“I learned what was happening at Christie’s in New York and I just started listening and educating myself and started thinking, ‘You know what, I would love to do an NFT with my work and I think the butterflies would really resonate,’” Gerard recalls.

With the same level of dedication and finesse she’s always applied to her practice, Gerard’s proposed digital animations have the capacity to deliver a greater sense of movement and colour beyond the canvas.

“I don’t want to just drag and drop a jpeg on OpenSea. Anybody can do that,” she says. “I think what’s going to create value if you want to do a successful NFT collection as a fine artist is to create something that somebody needs.”

With preparations for her solo exhibition Awakening at SCAPE Gallery underway coupled with plans to launch her first NFT by this November, Gerard is clearly keen to pursue both avenues.

“We work really hard as artists to paint these creations and once they’re sold you get a percentage of the sale and that’s it. You go onto the next body of work, but with NFTs I think the potential for what you can create in addition to the in real life pieces is really exciting,” she says.

Unlike digital natives whose works are conceived and sold within the digital space, Gerard is planning to offer her clients both. 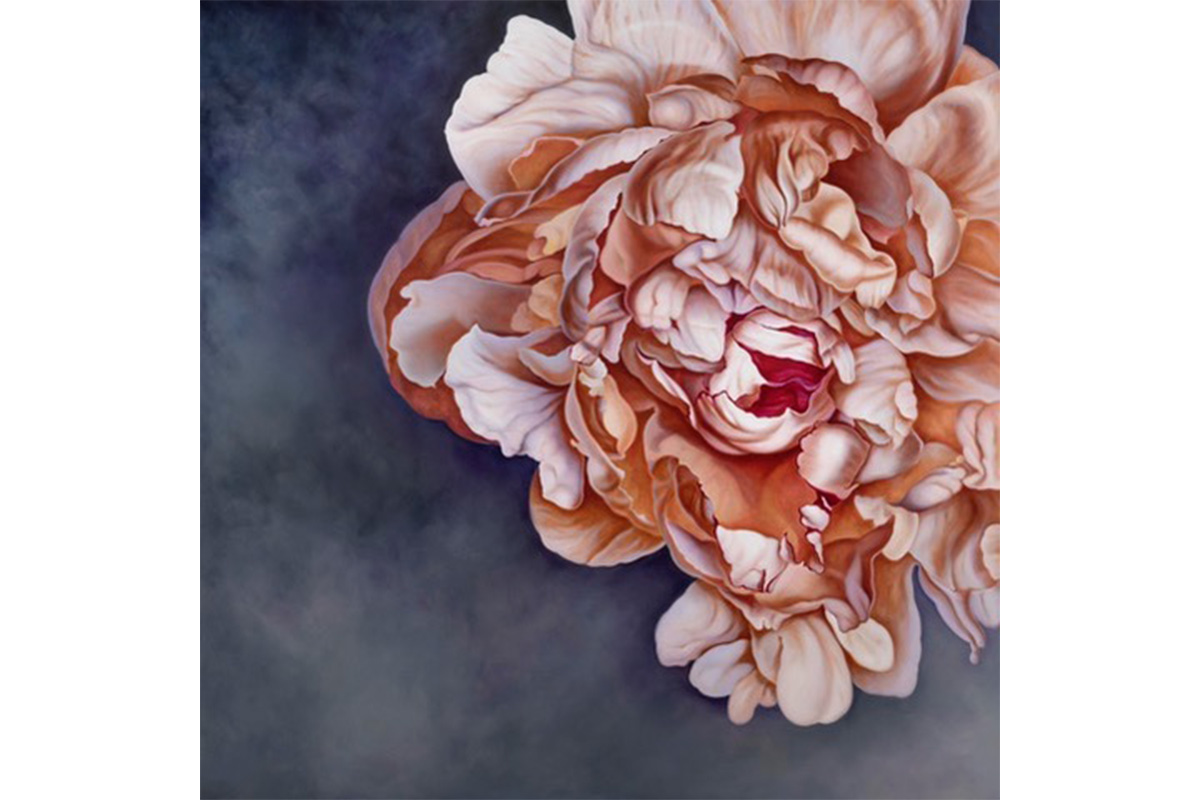 “As an artist I think it’s a gift to us that we have another way to sell our work in tandem with our galleries,” she points out.

Outside of her nine to five day job in the painting studio, Gerard is learning as much as she can about cryptocurrencies, NFT platforms and building a community. Through her presence on instagram she’s amassed 60,000 followers, as her work speaks for itself.

“I actually have a tutor to help me. Every single week we have at least a half hour call and he tutors me on the NFT space,” she says.

Then there’s finding a developer to collaborate with and pricing her digital pieces. “I’d work with an animator and a developer and we would create 500 variations of that painting [she points to her work] through animation.”

When asking Gerard what’s next on the horizon, NFTs are not the only new direction she’s prepared to go down.

“The NFT space was a door that opened for me, but then what else is there?” she questions.

“It would be so fun to do a huge interactive exhibition where the pieces are big on the wall and people can walk in and out of it with music.”

Read next: Meet the woman deciding what the world’s most iconic whisky tastes like