Morbid fascination takes hold as this you watch this decaying marriage career out of control like a slow motion car crash, writes Wendy Kay. 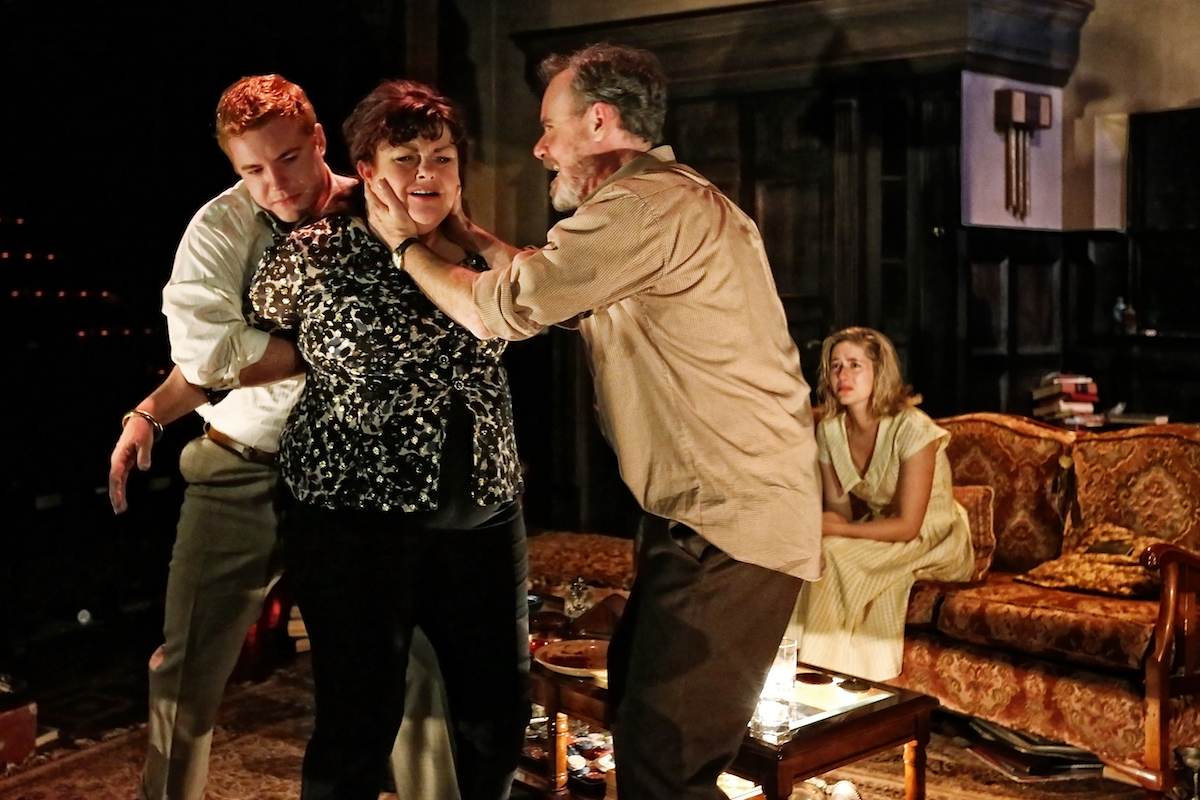 The laughs are few and far between watching Genevieve Lemon and Darren Gilshenan getting drunk together on stage. While the two annihilate themselves, and we’re talking glass, after glass, of the hard stuff, these two Australian actors aren’t drawing on their comedic skills to pack a punch. Instead they thwack you right between the eyes with the raw and savage brutality of a decaying marriage, word by vicious word.

Who’s Afraid of Virginia Woolf? was written in 1962 by American playwright Edward Albee. Albee, awarded three Pulitzer Prizes for A Delicate Balance (1967), Seascape (1975) and Three Tall Woman (1994), was 88 when he died in 2016, but his perception of a disintegrating, time-worn relationship lives on, as relevant today as it was when awarded a Tony in 1963.

After all, who hasn’t been in an uncomfortable situation where a couple starts going at each other like spitting feral cats? The overwhelming difference with this performance at the Ensemble Theatre Sydney, is that you are trapped, an unwilling voyeur to the cruelty of this blood sport. It is the intimacy of this 200-seat theatre that prevents you from making your excuses and leaving. Instead you’re stuck, watching this bloody car crash unfold, unable to intervene, and then not wanting to intervene, as morbid fascination takes hold.

The story centres around Martha (Lemon) and George (Gilshenan), an exhausted, depleted couple bitter at life, bittered more by each other. Martha is the daughter of a college president, George a washed-up professor of history. It’s the early hours of the morning and they are entertaining the bright-eyed and bushy-tailed new college couple, biology professor Nick (Brandon McClelland), and his wide-eyed wife Honey (Claire Lovering). 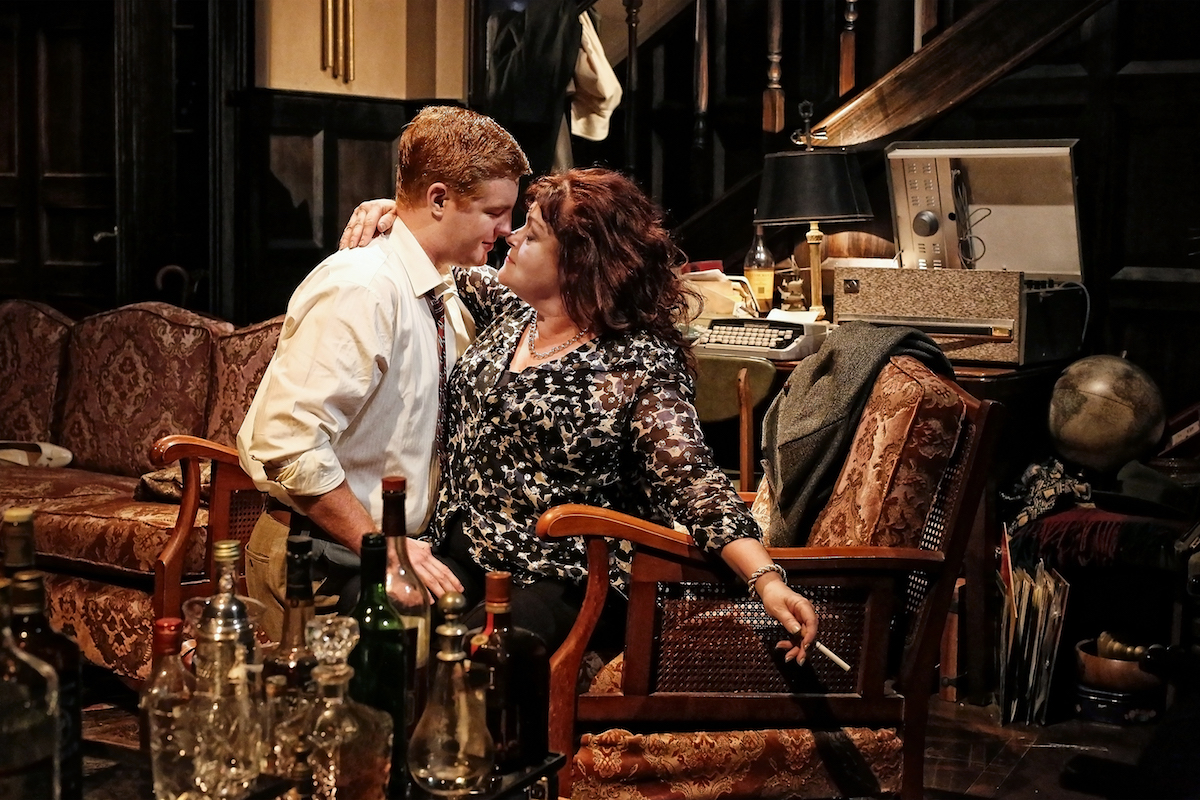 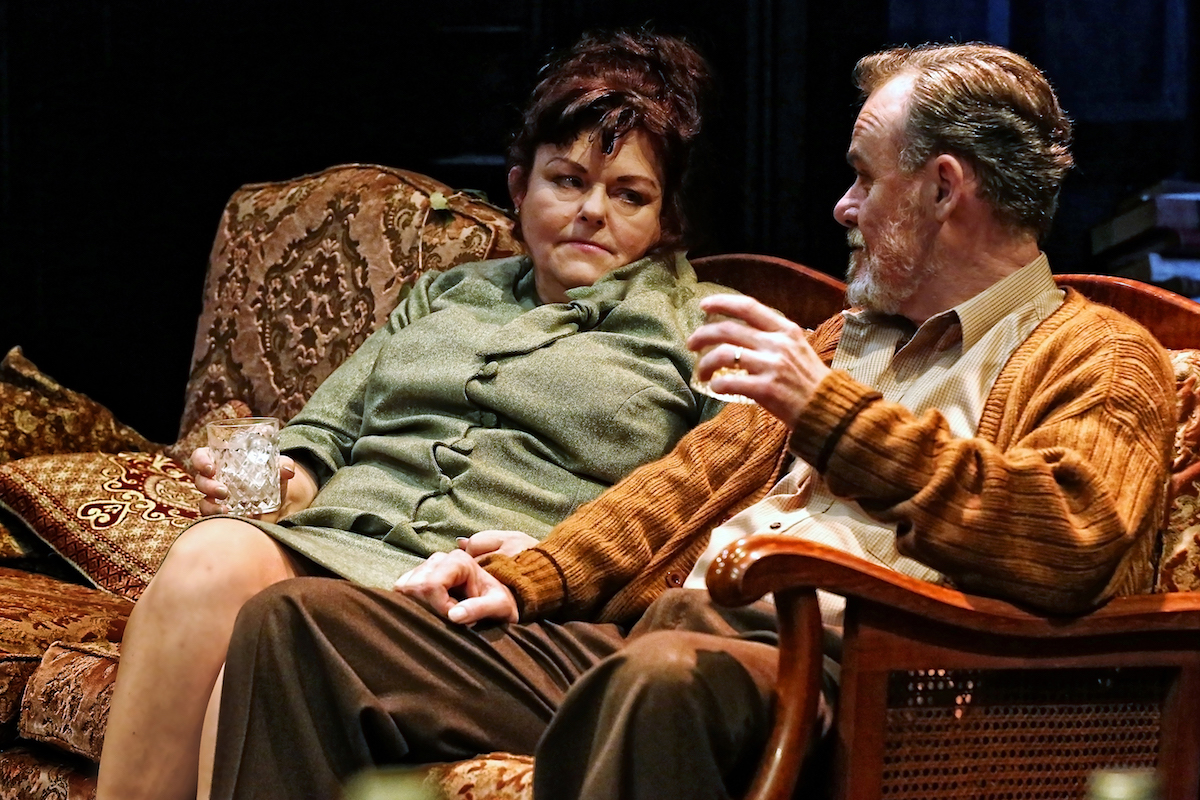 As Martha and George peel away each other’s layers to starkly expose their fragilities and flaws, Nick and Honey’s vibrant bloom wilts before your eyes as they are sucked into the vortex and games created by the older couple hell bent on destroying each other.

Fast facts:
Who’s Afraid of Virginia Woolf? was adapted to screen by Richard Burton, Elizabeth Taylor, George Segal and Sandy Dennis in 1966. All four actors were nominated for Academy Awards, with Taylor winning the Oscar for Best Actress and Dennis Best Actress in A Supporting Role.

The cast is outstanding. Lemon is bombastic, hateful and shattered, Gilshenan passive aggressive and pitiful. Lovering executes pathetic hilarity as she alternates between self-awareness and drunken stupor, while McClelland switches seamlessly between the cocky self-assuredness of youth and the vulnerability of a man lost to unwanted circumstances.

Staging his directorial debut for the Ensemble, Iain Sinclair, winner of three Sydney Theatre awards, doesn’t disappoint. He drags you into this domestic chaos, even when you desperately avert your eyes from the scorching humiliation. He skilfully draws you back with comedic moments, impeccable timing and perfect symmetry.

When it gets too much it is possible to distract yourself with the clutter of the set by Michael Hankin. Absorbing in its detail, the drab, dishevelled 60s campus apartment is messy with the knick-knacks of the decade: ashtrays, a soda syphon, crystal glasses, records, garish carpets and uncomfortable chairs. Quaint and real.

The constant dialogue of this nearly three-hour play is exhausting, but never gratuitous, an intriguing distinction in today’s world of instant gratification. Yes, it requires concentration, but if you’re going to be witness to this private hell, you deserve to leave as emotionally spent as Martha and George, and perhaps just a little hopeful for Nick and Honey.

Who’s Afraid Of Virgina Woolfe is playing at Sydney’s Ensemble Theatre in Kirribilli until June 18.
For tickets, head to ensemble.com.au.

Want more from Wendy? Check out at wendysworld.com.au