A walking miracle: trekking in Victoria

Walk to the 12 Apostles they said, it’ll be fun they said. It certainly was – at the end. 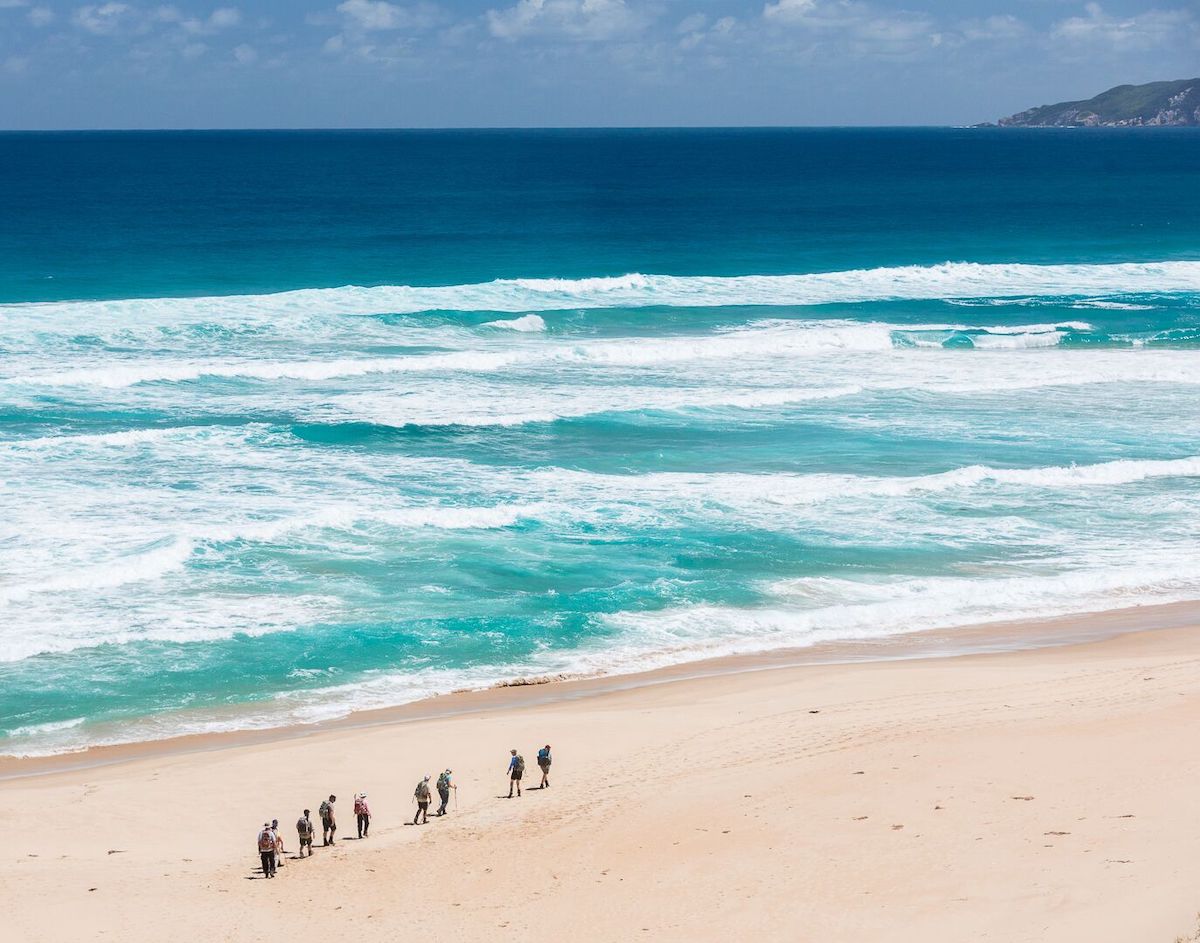 It was the promise of an echidna that got me there. ‘There’ being to Moonlight Head, the lookout yawning 90 metres above Victoria’s south-western coast and its wild Southern Ocean. We soaked in the 180-degree panorama boasting spectacular rugged coastline hugged by dense wilderness, looking back at the 14.5 kilometres, east to west, we’d walked from our departure point at the Melanesia Track.

We’d climbed 700 metres, crossed gullies, ploughed through soft sand, clambered over rocks, traversed boardwalks and scuffed over clay and dusty bush tracks to reach the outlook. For someone whose idea of a walk is a lap, or two, around the block with the designer dog, it wasn’t my thing. I don’t do hills. Nor does the dog.

But Tom, one of my trusty guides along this 12 Apostles Lodge Walk, had promised there was an echidna ambling along, ‘up the path’, ‘around the corner’, ‘just a bit further’. He’d run ahead (yes there are those who run like fleet-footed gazelles up narrow bush tracks) to prepare cordial and cake for our arrival at the summit and kept radioing back with echidna reports compelling enough to spur this middle-aged, overweight journo up the hardest and last hill of the day.

We’d already had our fill of native birds, wallabies and roos, even the appearance of a copperhead snake was a welcome, albeit startling, sight. So, having spotted dozens of furrows dug by the spiky little echidna, surely he was close.

I never saw the elusive monotreme. In fact, I doubt it was ever there. But Tom’s relentless prodding egged me on, no-one more surprised than me when I reached the top.

This was the second and hardest day of the four-day, 50-kilometre trek along Victoria’s Great Ocean Road. My companions, younger and fitter, were ahead, leaving me with Hugo, the second guide who patiently and cheerfully kept to my weary step, stopping every now and then to point out a bush, a berry, or a bloom, allowing me to catch my breath with dignity.

You see, I hadn’t read the fine print when I accepted the invitation from the Australian Walking Company to see the Apostles ‘up close’.

The only words that leapt out to me were ‘crafted gourmet menus’, ‘foot spas’ and a ‘helicopter flight’. I imagined the ‘perfect balance of luxury and adventure’ to include being bussed to exotic highlights to hear tales of shipwrecks and dinosaurs, the geography of luxurious rainforests and vast stretches of windswept, eye-wateringly beautiful beaches, before being bussed back to my eco-lodge each night to feast on fine Aussie fare and boutique wines.

Indeed, we were treated to all of the above and more. So much more. It was the walking that got in the way – at first.

More of a resort kind of gal, walking the second half of the 104-kilometre Great Ocean Walk from Castle Cove through to the 12 Apostles, even returning to the sanctuary of the lodge each night, was not realistic. At all.

It was too late to pull out by the time I did peruse the details, leaving me little time to buy hiking shoes, wear them in and cram in the six-week recommended training.

But along came Hugo and Tom who, between them, got Wendy walking.

Yes, at times I grizzled, panted and whimpered, and once, desperate to declare myself an emergency, pointed my ruddy face hopefully to the sky at a passing chopper.

I toddled over annoyingly steep grassy coastal hills, trudged up hundreds of steps, then lumbered down hundreds more (much to the chagrin of my poor knees). I scrambled over rocks, ploughed through dusty tracks and weaved through scrub. I also dealt despairingly with disappointment, fooled by those damn false peaks and the hills which keep on giving.

But I did it. Which effectively means, anyone can.

A minimum of four and maximum of 10 is required for each walk. Six journalists made up our motley crew of strangers, collected from Melbourne airport and driven the three hours to the 12 Apostles Lodge, nestled in bushland at Johanna, a half-way point along the Great Ocean Road.

As early as the first evening, we were no longer strangers. After a nifty jaunt of just seven kilometres, we bonded over platters of hors d’oeuvres served with craft beer and wine, while soothing our feet in tubs of warm frothy water. We’d completed our first walk from Johanna to Castle Cove, and already there were tales to be told, stories to be embellished, only to be exaggerated again by the campfire after dinner.

The lodge comprises five double rooms, able to be divided into two for singles, (beware of very thin walls) with generous ensuites to share. There’s a quirky ‘blister room’ to repair worn feet, a service I never required because my shoes miraculously came through, and a ‘debrief room’ where we gathered nightly to see how far we’d come and prepare for how far we had to go.

The dining room houses a long table where we dined on Tasmanian salmon, chargrilled steak, lemon risotto and desserts to die for. Following breakfast, hot and cold, we’d collect our daypacks, waterproof jackets, walking poles and water bottles – all provided – and grab a handful of lollies to munch along the way. There was also lunch, perhaps the heaviest of cargo – think chunky Thai beef salad – but worth its weight in gold. 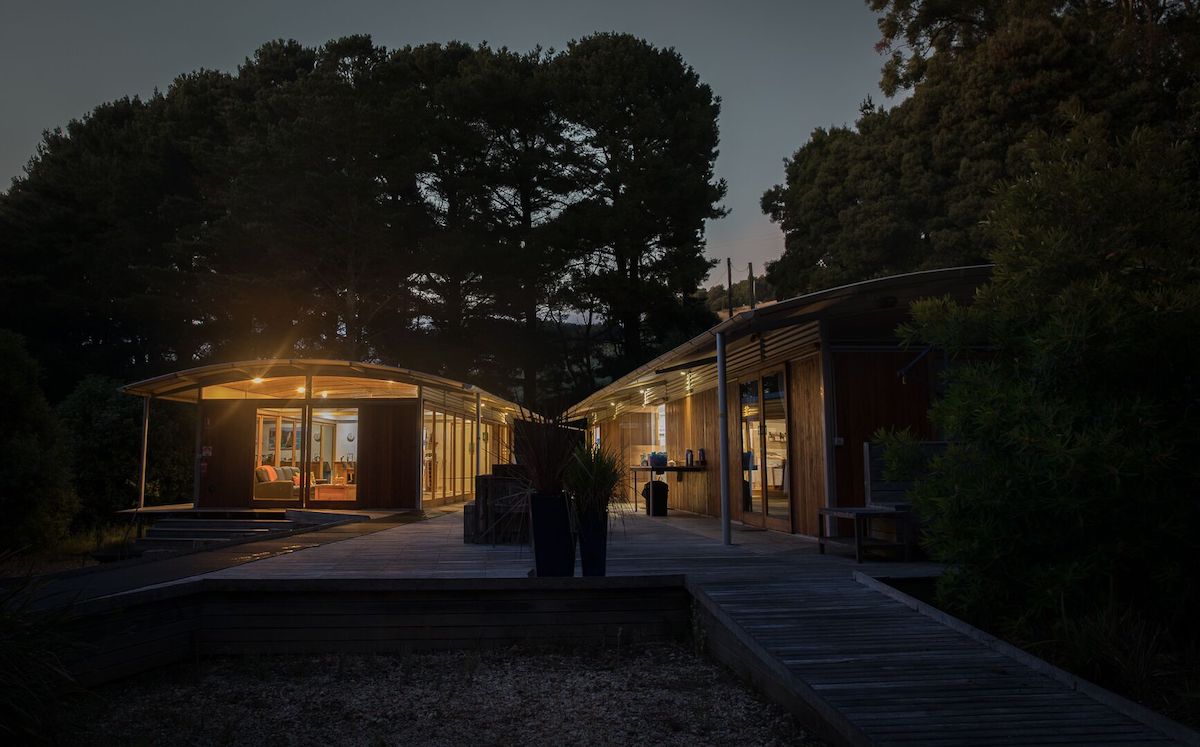 Sanctuary at night in The 12 Apostles Lodge

Learning along the way

Day three, the longest, but not so difficult walk at 17 kilometres, was definitely the highlight.

Dropped back at Moonlight Head we entered a truly mystical rainforest dominated by towering stringybarks and cushioned by lush ferns. Among the many fascinating facts he shared, Hugo taught us the important role of fungi – some species vital for this sophisticated ecosystem, while others, like the cinnamon fungus, devastating in its impact, forcing us to pass through boot-washing stations to prevent its fatal spread.

At Hugo’s suggestion, we separated to walk alone and enjoy the silence of the forest, the peace punctured only by the roar of the ocean or occasional bird call. It’s precious timeout, to think, reflect and just be.

We meandered through a magical canopy of casuarina trees and delicate filtered light to reach The Gables, one of Australia’s highest clifftop outlooks offering dazzling views, before descending the 366 stairs to Wreck Beach.

Lying encrusted in rock pools is the huge, rusty anchor from the Marie Gabrielle, while further up the Fiji, stood erect and proud, both stark reminders of the treachery of Shipwreck Coast where raging seas have swallowed 600 ships over the centuries.

We pushed on, wading through canals, negotiating large slippery rocks and delighting in a flock of rare hooded plovers scampering along the beach. The perfect day was capped off by a refreshing swim in the lazy Gellibrand River which flows between the Great Otway and Port Campbell national parks, emptying into the ocean at Princetown. 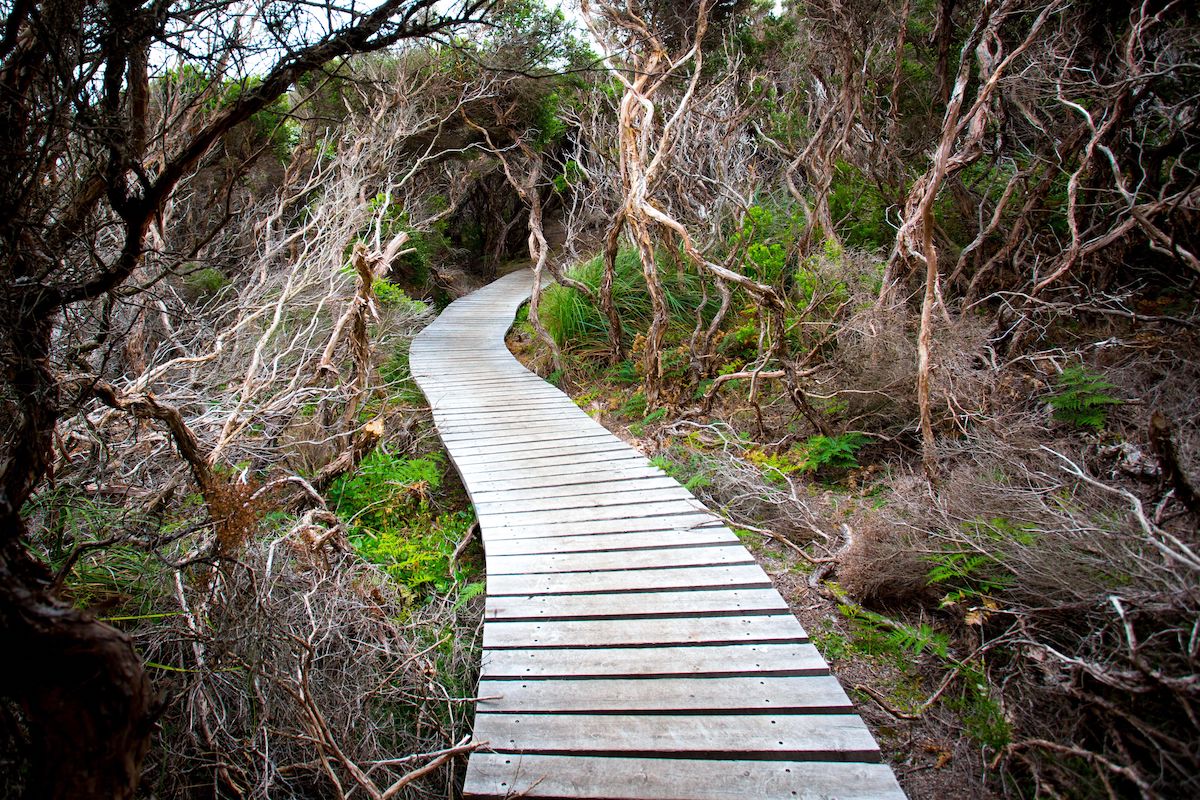 Walking some boards in the bush

Day Four was a veritable sprint at just four hours and eight kilometres. The trail continued to rise and fall, but gently enough to appreciate the Apostles looming dramatically before us, getting closer and closer.

There are only seven of these eroding limestone stacks remaining, but their breathtaking rugged splendour compensates for the others that have crumbled.

We arrived at the Twelve Apostles Visitor Centre stunned by the number of tourists, intrusive after our solitude, and boarded the helicopter. As we zoomed over the Apostles, it occurred to me this was a rather splendid way to see them, to appreciate their majesty and admire the wilderness from above. Easy, gentle and effortless.

The writer travelled as a guest of The Australian Walking Company, which operates the Twelve Apostles Lodge Walk between September and May. Prices start from A$2,195 p/p.