A couple of days is never going to be enough in the big, brash concrete jungle of glamorous, glitzy New York City, but here’s some food for thought for at least a couple of trips. 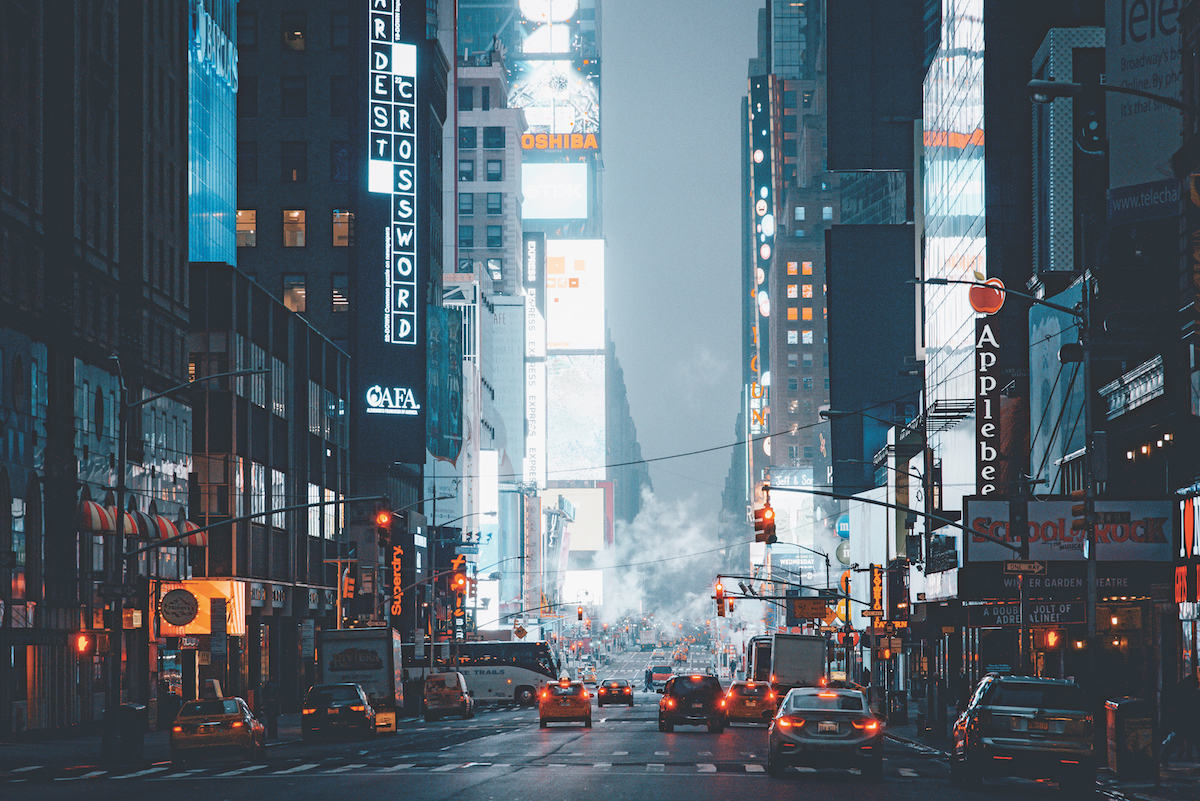 The Marmara Park Avenue is a stylish property in a great Midtown location and, with a wellness centre, it’s terrific for relaxing tense muscles after a tiring day of business meetings. Modern, stylish and relaxed, its bespoke design features stylish sculptures, smooth plaster walls and a glass and steel vestibule.

The Marmara’s well-appointed rooms feature, among other things, plush robes, slippers and a built-in kitchen with cutlery and wine glasses. It has an excellent little restaurant in the foyer, a 24-hour fitness centre, subterranean lap pool, and a Turkish hammam with treatments you won’t find anywhere else in NYC.

Loews Regency New York on the corner of Park Avenue and 61st Street, sits on the border of Midtown’s business and banking district and the Upper East Side’s residential neighbourhood, so it’s not surprising that it has become a place for business executives to meet over breakfast en route to work in the Midtown and Financial Districts.

The Big Apple has sandy beaches just a short metro or car ride from the heart of the city in Queens and Brooklyn, including Rockaway Beach and Long Beach – New York’s only two surfing beaches.

Crosby street hotel is one of the most gorgeous boutique hotels in NYC. Very English, very Knightsbridge, very homey – the kind of place you’d like to live in. You won’t see any suits here, but you might just run into an actor or two (during my trip I saw Toni Collette and Freida Pinto having breakfast meetings amid the artwork and sculptures).

There’s even a full-screening cinema in the hotel. The food is top notch: try a delicious late-night dinner in the intimate Drawing Room. If you’re not interested in being in the centre of the action, the Crosby’s sister hotel, The Whitby, on the Upper East Side, is a little quieter and restrained, catering more to the business crowd, and a director or two.

With three Michelin stars and helmed by Anthony Bourdain’s close friend and sometime travel partner, Chef Eric Ripert, Le Bernardin is a little bit of Paris in New York. Ripert is one of the world’s best chefs and one of the most affordable and quickest ways to try his food (aside from the full degustation menu in the restaurant) is to take the three-course prix-fixe lunch in the lounge. 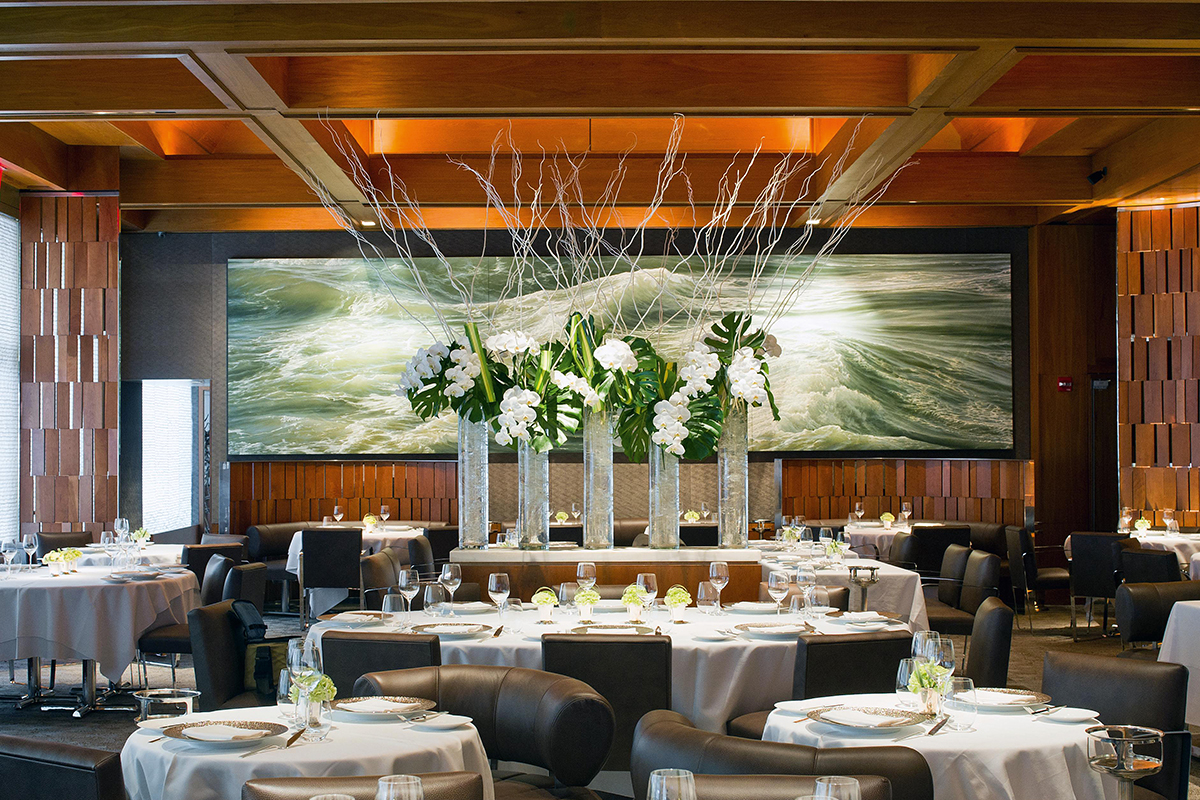 At only US$57 a head, it’s ideal for a working lunch. The seafood-focused menu features Peruvian ceviche and lobster cappuccino (celeriac soup, lobster foam and Perigord truffle), plus unparalleled service and wine list.

The Whitby Bar & Restaurant places special emphasis on its menu, which offers more British modern cuisine and very English afternoon high teas. This venue is rich and colourful, with a stunning 10-metre pewter bar, upholstered banquettes and a sunny orangery with vaulted ceiling and skylight. The menu offers a diverse range from strawberry gazpacho and salmon tartare to wild cod with skordalia at terrific prices: a two-course set lunch is US$26; open all day, every day, so perfect for a Midtown business lunch or a casual dinner.

For a delicious coffee you can’t go past Bluestone Lane. With multiple outlets across the city, the brand is bringing Australian cafe culture to NY and New Yorkers can’t get enough of it. Like Two Hands (see ‘In the know’), its casual Melbourne-inspired coffee shops offer cafe fare such as avocado toast.

Every designer brand at ridiculously low prices. Buy presents for all the family in one go, in one location, and be sure to visit the new multilevel men’s section directly opposite the entrance to the new One World Trade Center.

Nothing says American WASP quite like Lauren and his trademark blue, white and red polo shirts, chinos and loafers. Get yourself some American style at the store in Greene Street, Soho, not far from The Crosby, or a souvenir from the MoMA Design Store opposite the hotel on the corner of Crosby and Spring streets.

Running through Manhattan, this most famous of shopping districts is where you’ll find everything from Bloomingdale’s, Macy’s, and Saks Fifth Avenue to J.Crew, ALDO, and a host of other stores that draw people from around the world. 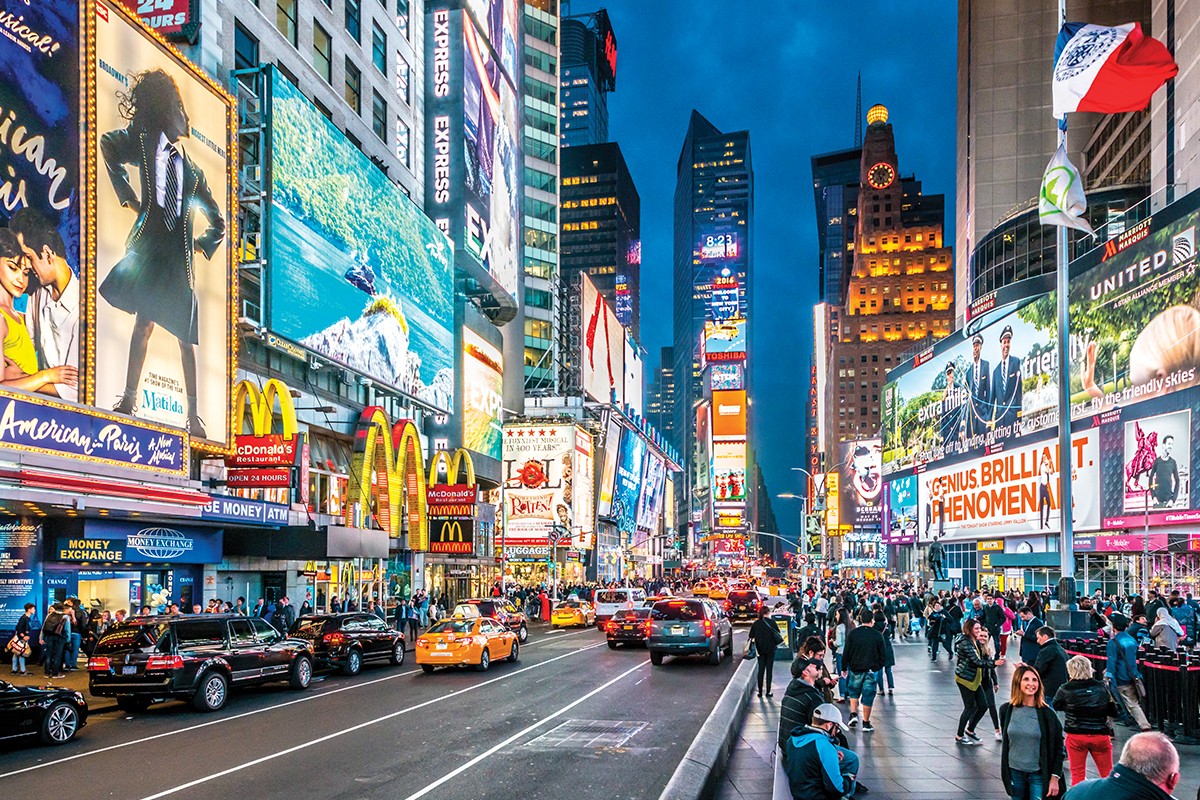 Drinks with a view

For unbeatable, 360-degree skyline views of NYC you can’t go past Bar SixtyFive on the 65th floor of the Rockefeller Center, in the same building as Top of the Rock Observation Deck. 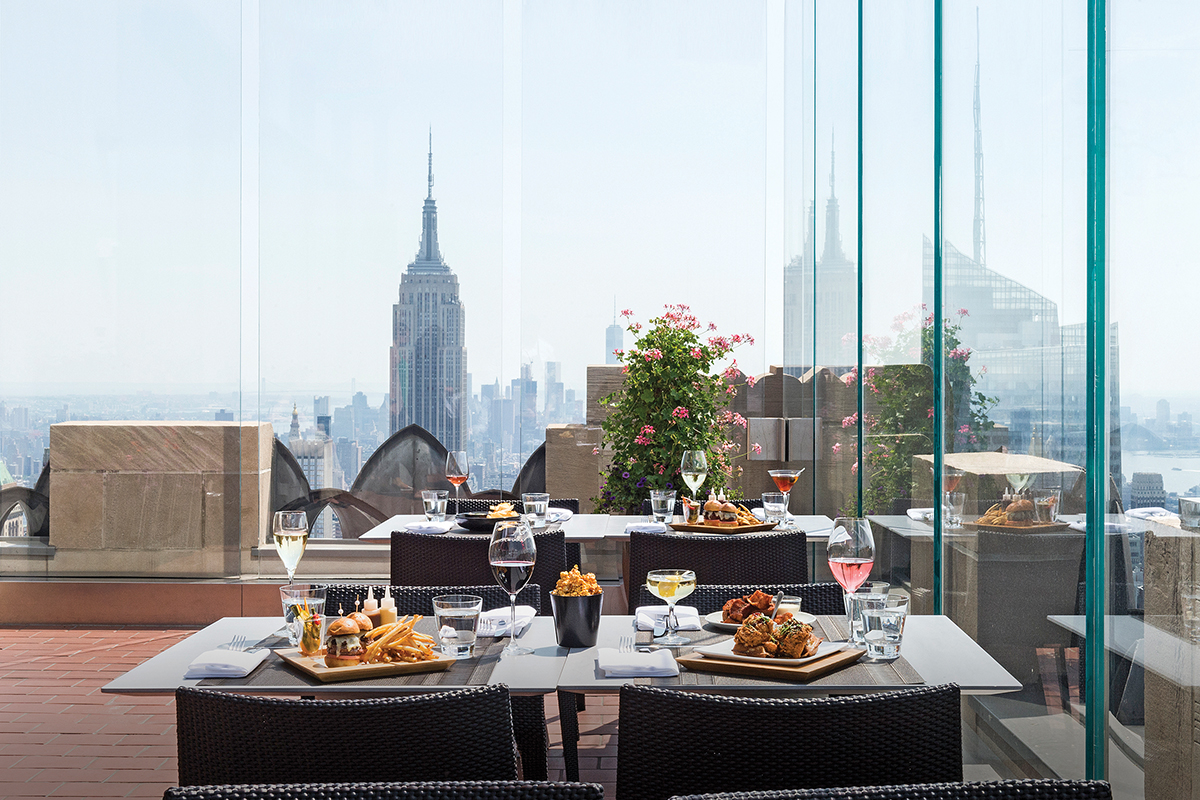 The best time to visit is between 7pm and 8pm in summer, but bring a sweater as it gets chilly outside at these heights. Have a drink at the central stand-up tables or reserve a table for the night at the Raw Bar.

The food – raw, chilled and grilled – is as good as any you’ll get in NYC, with dishes like Spicy Nitro Tuna and venison carpaccio at surprisingly reasonable prices. Treat a colleague to a light bite and a few drinks after work or relax with a full pre- or post-show meal. 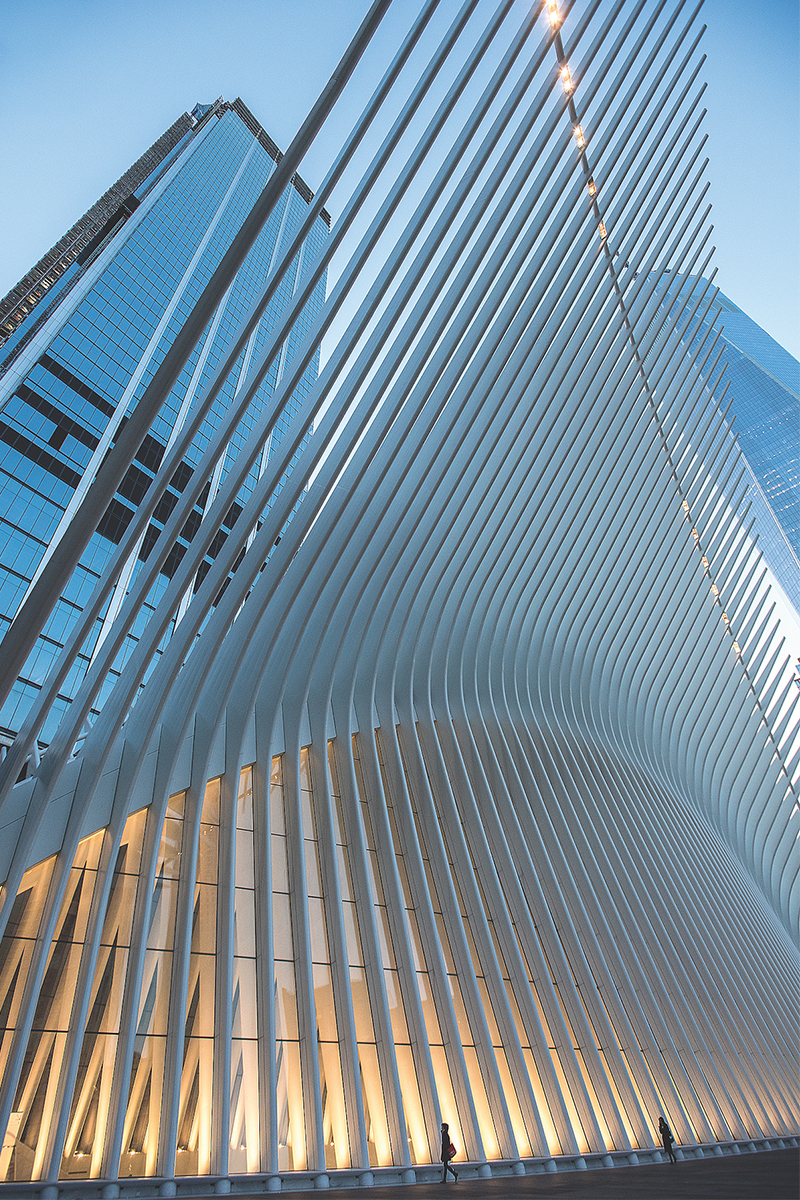 A Broadway ticket (or three) is reason enough to visit the Big Apple, if you’re not already there for work. Book well ahead through The Broadway Collection as tickets to the hot shows in the world’s most famous theatre district can be hard to come by.

If you’re on a flying visit or out of luck, try the Public Theatre on Lafayette where you can watch interesting Off Broadway shows or eat at Joe’s Pub while you watch a live music performance or show.

The spaceship-like mall interior of the Oculus transport hub at the World Trade Center – part of the One World Trade Center complex – features a striking, unusually shaped spiky exterior and an all-white interior, with a very futuristic feel inside.

It’s important to visit the 911 Museum and pay respects, as depressing as it is, but you can let the Oculus raise your spirits. Better still, take flight by ascending to the top of the tallest building in the Western Hemisphere in a heart-in-the-mouth sub-60 seconds.

From its 100th floor, the new One World Observatory has stunning views of the city.

A travel writer and editor for more than 20 years, Karen Halabi writes for Australian and international magazines and newspapers. She prefers to travel in style and is editor of www.theluxetraveller.com