Opening night: Working my way back to Jersey Boys

Wendy Kay heads along to Jersey Boys at the Capitol Theatre, Sydney, to see if the reinvention of the much-loved musical is worth a second look. 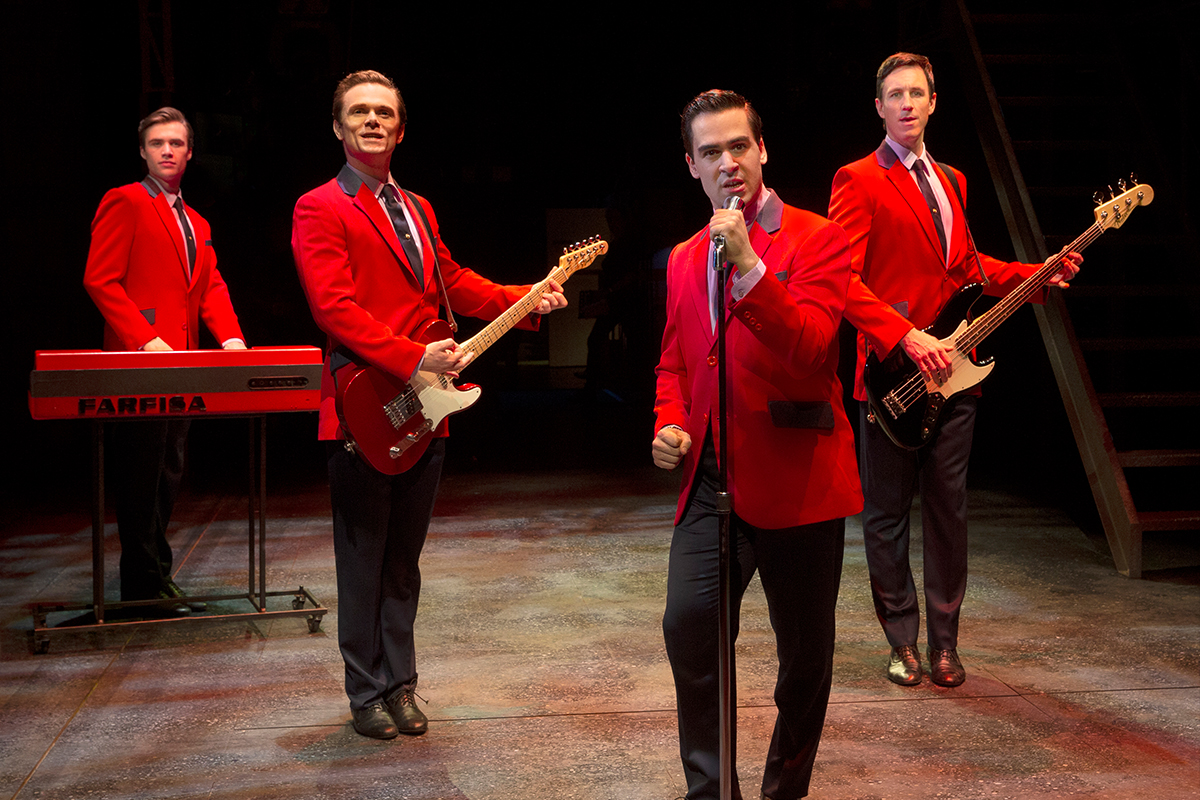 “Let’s remember that reinvention is as old as our species.”

So said Marshall Brickman, co-writer of Jersey Boys, when interviewed by his co-writer Rick Elice. And with those words ringing in my ears I set off to see the Jersey Boys musical. Again. I was curious to know if the return of the reinvention was worth a repeat visit.

It was. In fact, I enjoyed the return better than the original reinvention, if you get my drift. It doesn’t matter how many times you see this show, you walk out feeling good. Damn good!

It doesn’t matter how many times you see this show, you walk out feeling good. Damn good!

Until perhaps Sherry, Sherry Baby echoes one too many times around the head lying in bed after midnight. That’s when you’ve got to change your tune.

The musical dramatises the emerging success and fallout of The Four Seasons, one of the original boy bands of the 1960s and 1970s. Think Walk Like A Man, Sherry, Big Girls Don’t Cry, My Boyfriend’s Back, Working My Way Back To You, and then think again. There’s so much more.

Sydney, Australia was last treated to Jersey Boys in 2009 at the Theatre Royal, when it made history as one of Sydney’s longest running musicals.

This time it’s at the larger Capitol, a limited season, with Rodney Rigby returning to produce and three of the main leads among the original cast which toured Australia before. 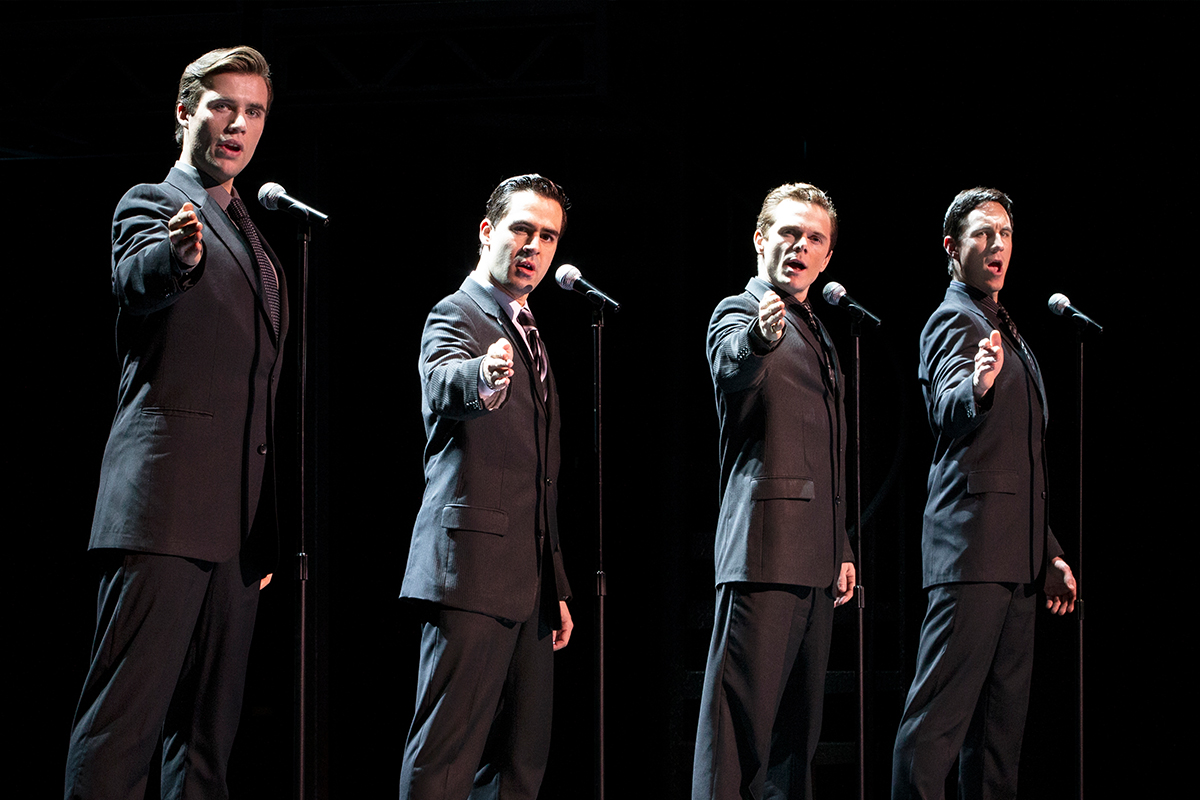 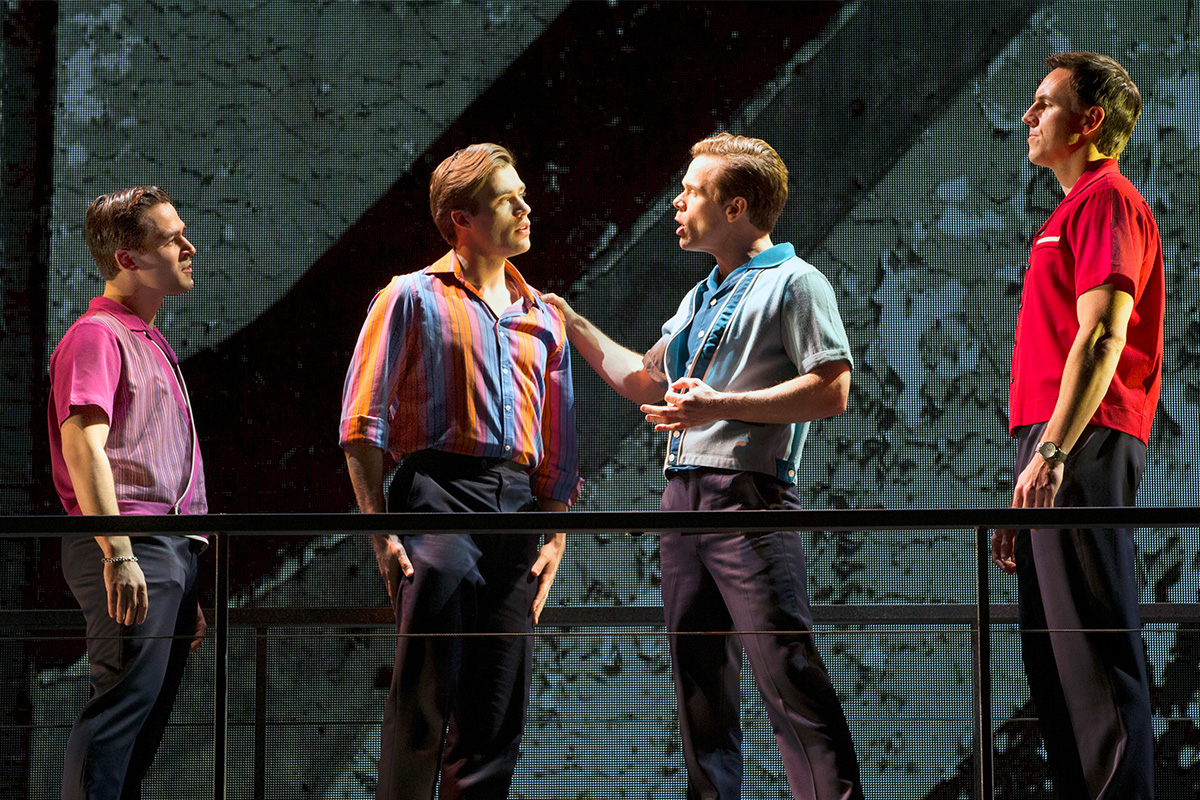 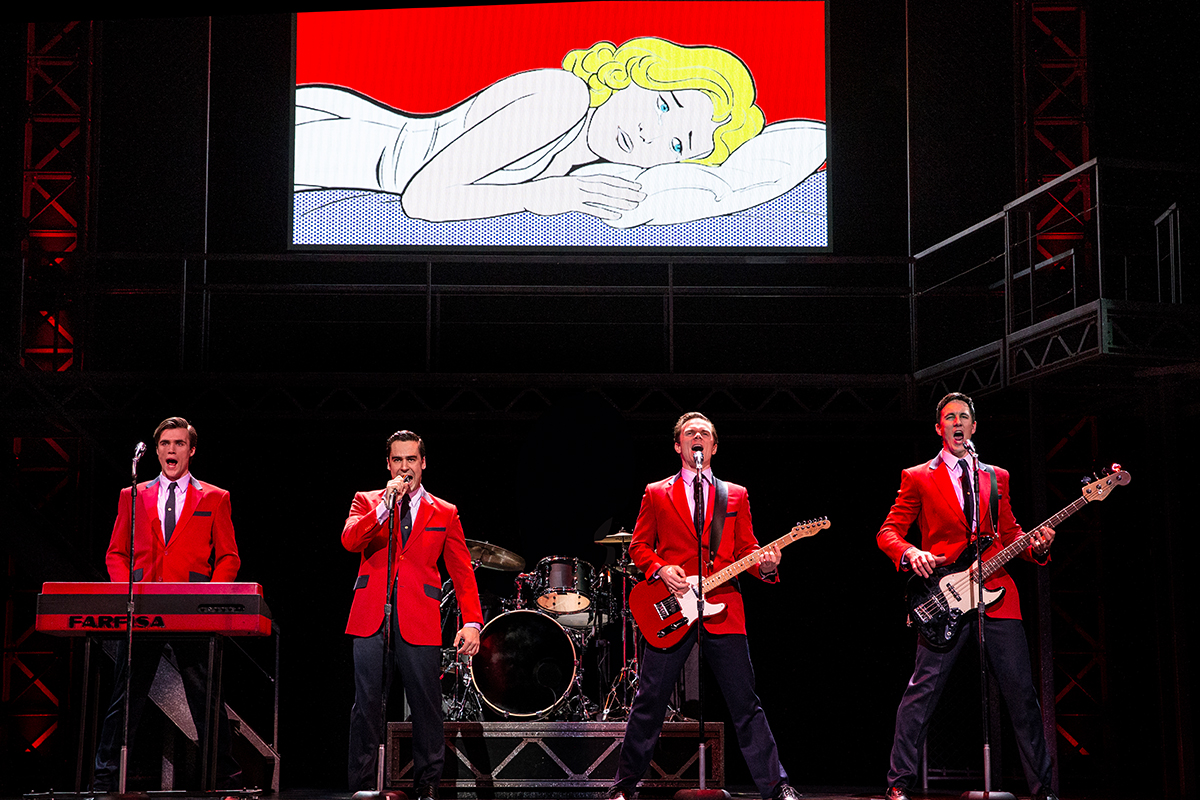 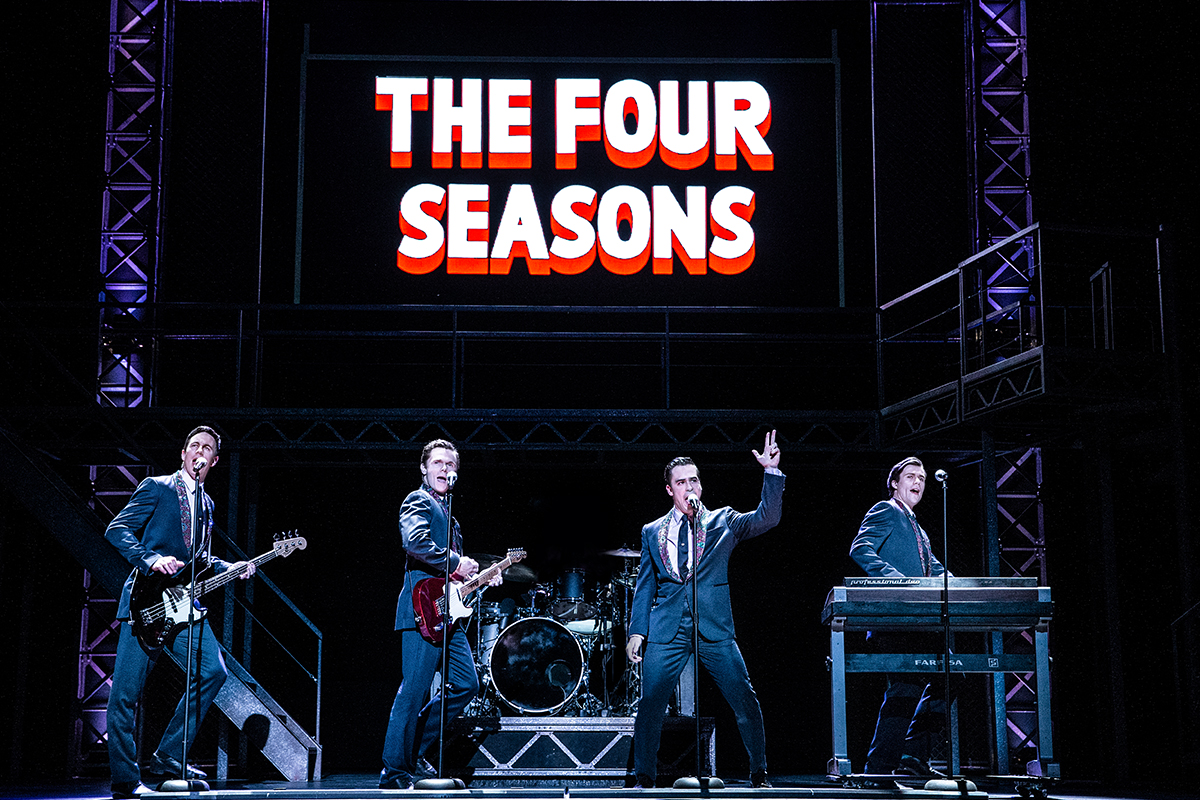 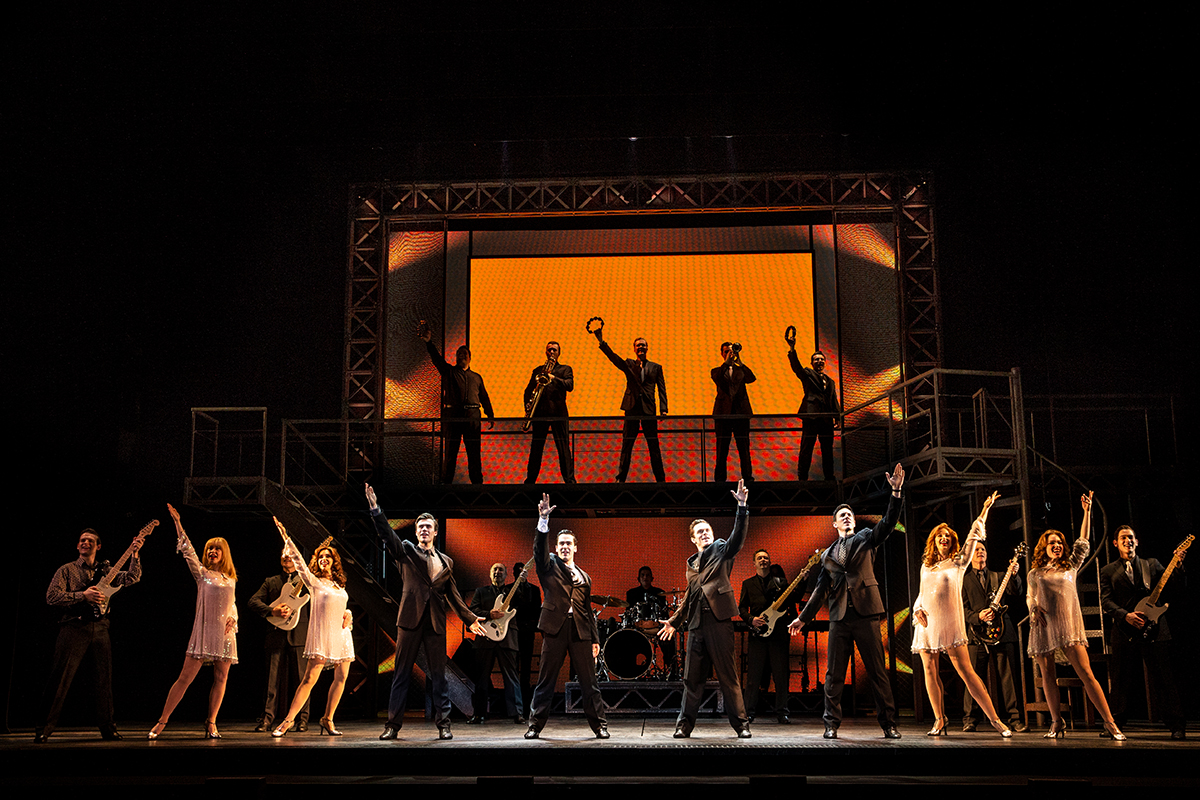 There was a little confusion over the lead in this production. Bernard Angel, who played Joe Pesci and understudied Valli before, was billed as Frankie Valli. However, at Wednesday’s media preview and last night’s Opening Night it was understudy Ryan Gonzalez taking the role.

Producer Rodney Rigby passed the error off as an oversight on his part, claiming Gonzalez, a member of the ensemble, was always the alternate “Frankie”.

Who knows if Angel can do a better job than Gonzalez. It doesn’t matter. In a couple of rare moments, nerves seemed to get the better of Gonzalez, but for the most part, you fell for the little guy. He nailed it.

While his big numbers were superbly supported, his more poignant ones, My Eyes Adored You with Cristina D’Agostino (Mary Delgado), and Fallen Angel were emotive and real.

Melbourne boy Cameron MacDonald (Beautiful: The Carole King Musical, Guys and Dolls) was brilliant in his role of Tommy DeVito. Loved him, loathed him. Perfect.

Thomas McGuane, joining the cast for the first time, was gawky and earnest enough to pull off the passive aggressive Bob Gaudio, while Glaston Toft (My Fair Lady, West Side Story, Oklahoma, Priscilla) returned as a fabulously talented, yet appealingly dysfunctional, Nick Massi.

The digital cartoons, once considered novel, are overused in this production, proving more of an unnecessary distraction than an enhancement. Do we really need to see an oversized psychedelic coffee cup? Nup.

But Jersey Boys left toes tapping up the aisle and into the carpark after the finale. It’s a good yarn told with spectacular singing and dancing. And oh those fabulous songs!

Go see Jersey Boys. And if you’ve seen it before, see it again. It’s a reinvention worth a second look.

Jersey Boys is at Sydney’s Capitol Theatre until 1 November; Brisbane’s Qpac from 2–20 January; and Melbourne’s Regent Theatre from 23 February–10 March. Tickets are from A$69.90.