The transformation of Doha into a slick modern city has rapidly gathered pace in the past decade, with its hosting of the 2022 FIFA World Cup a major driving force. But amid all that futurism, there is a heavy dose of tradition. 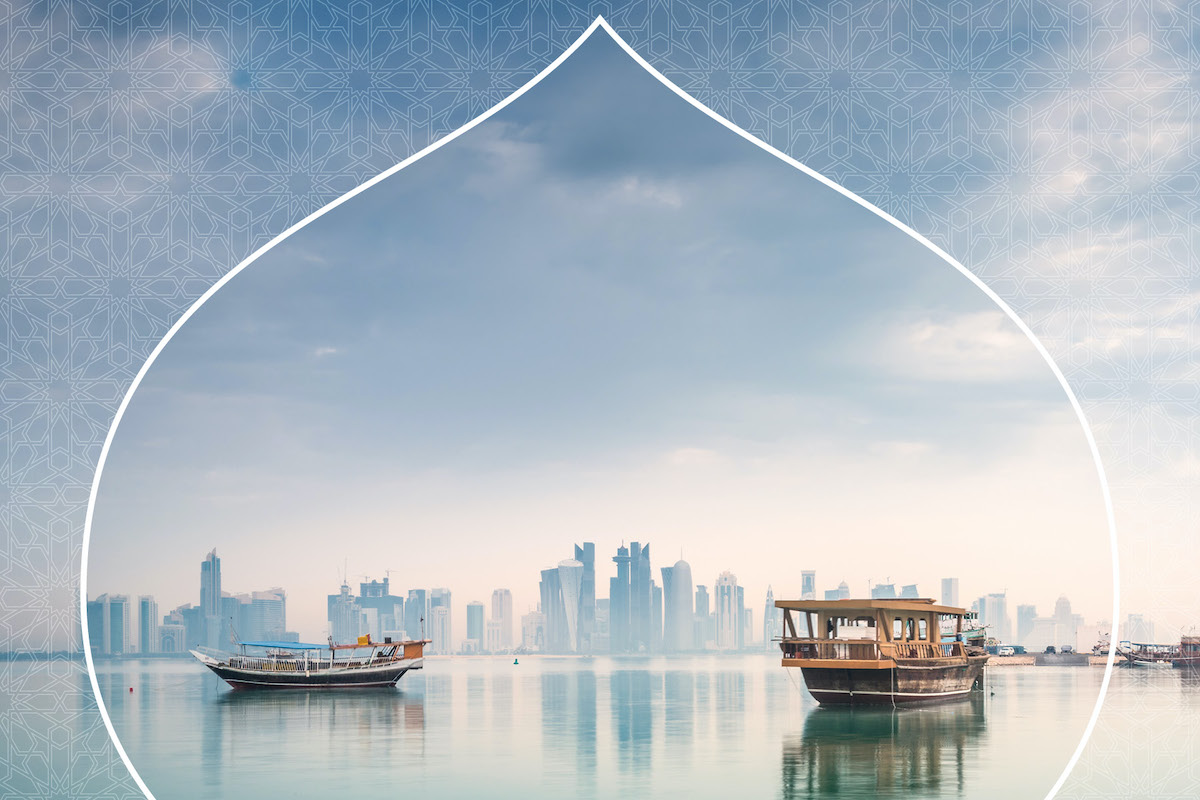 Surrounded by the smooth marble steps of a great amphitheatre overlooking the waters of the Persian Gulf, it’s easy to be transported to a time gone by – despite the high-rises in the distance.

This fusion of an ancient Greek structure with traditional Islamic features is the centrepiece of Katara, a cultural village that was built on reclaimed land in 2010 to help Qatar in its mission to become a “lighthouse of art” – a place where the old and the new converge.

Families stroll the waterfront, stopping for ice cream from vendors on bicycles. As they swiftly lick it up before it perishes in the desert heat, still sweltering even as the day draws to a close, we watch water fountains dance with bright neon lights.

People mill around the architectural elegance of the brightly blue-tiled Masjid of Katara and its smaller sibling, the Golden Masjid, rendered even more splendid by the glow of the setting sun.

Far from just another futuristic city that has risen from the desert dust, Doha cleverly blends the traditional with the modern to come up with something unique. It doesn’t strive to copy cities like Dubai, but is instead determined to forge its own distinctly Qatari modern identity.

The eight stadiums that will host the matches of the 2022 FIFA World Cup in November and December all mirror this commitment.

Although Qatar has faced heavy criticism for the treatment of the migrant workers involved in the new stadiums’ construction, and there is much debate over the environmental cost of the tournament (most of the pitches are to be cooled), the designs themselves have received some acclaim.

All fuse an ultra-modern look with traditional inspiration such as the wooden dhow boats, ghafiya prayer hats, the nomadic bayt al sha’ar tents, the intricate bowls long used in the region as well as the fanar lanterns.

Rather than a gimmick thought up for the sporting event, it’s a design trend that can be seen throughout the city – we spy it in the metro stations, with their Bedouin tent-style design, as well as hotels such as the 270-room Mondrian, strikingly shaped like a falcon, the national bird of Qatar.

We encounter these feathered creatures with their sharp curved beaks first in the Souq Waqif, sitting patiently and hooded on their wooden perches in a specialist store where Qataris go to buy the prized birds.

Although assured we can carry one falcon in the economy cabin of Qatar Airways, we emerge empty-handed into the humid twilight and step into the Doha of yesteryear.

After large swathes of the marketplace were destroyed by fire in 2003, the area was redeveloped in the style of a 19th century souq using many of the original materials, a project that reached completion in 2008.

“In the intense heat, outdoor play is made possible by the use of cooling mist fans, chilled water systems as well as clever shade planning in the form of sails.”

Now, the mud-rendered shops with their exposed timber beams form the bustling heart of the city, coming alive at night when its stone alleyways and stalls are visited by thousands.

Even with its modern touches, such as the one-metre air-conditioning machines pumping out cool air upon the al fresco diners, it remains a glimpse of the old world.

We shuffle past carpet shops with huge rugs unfurled from their walls, rabbits and tiny colourful birds crammed into cages, fragrant spice shops and vast sacks of dried fruits.

Around the corner, we greet the royal camels and horses who reside in pens overlooking the palace where they perform a parade each morning and evening.

Cafes and restaurants are tucked into the nooks and crannies, like Parisa – a bejewelled underground oasis where we feast on sumptuous Persian dishes. The souq is the place to come for traditional purchases, but for other items, the locals head to spectacular, air-conditioned malls.

Galeries Lafayette opened in 2019 bringing a touch of Paris to Doha, with air conditioning even along its outdoor walkways.

Place Vendome, in newly built Lusail City, is also in spectacular European style with intricate domes throughout and an impressive roll call of high-end retailers.

Then there is the Galleria with its art galleries, stores, cafes and selfie stations in Msheireb Downtown Doha, a newly completed regeneration project that interweaves traditional designs with futuristic flair.

Claiming to be the world’s first smart and sustainable downtown regeneration project, the development has a high concentration of sustainable buildings accredited by international green building certification system LEED, as well as 6,400 solar panels that generate four per cent of its energy.

As we wander from one to the other, even though the temperatures are well into the 40s, we manage to keep going.

That could be because the area has been cleverly planned to catch cool breezes from the north, with many of the walkways shaded from the sun.

Temperatures are rising still as we leave Msheireb behind to make our way to the National Museum of Qatar, shaped into the otherworldly form of a desert rose, a formation of crystal clusters.

Opened in 2019, this museum gives us a fascinating look at the history of Qatar going back to the days when it was known for pearl diving, enlivened by interactive and multimedia exhibits.

Even the play areas for children have been thoughtfully crafted into an Adventure Ship and Cave of Wonders to showcase the heritage of Qatar in an interactive way.

In the intense heat, outdoor play is made possible by the use of cooling mist fans, chilled water systems as well as clever shade planning in the form of sails.

It’s this constant interplay of hot and cold, old and new, that highlights the extent to which Qatar is a country of extremes.

Now with the eyes of the world firmly upon it, it must balance these in a sustainable way to become truly futuristic. And as one of the richest countries in the world in terms of gross domestic product per capita, it certainly has the means to do so.

The writer travelled with the assistance of Qatar Tourism and Doha Bus.