The top 10 most amazing holidays on Earth (and beyond)

There are vacations, and then there are once-in-a-lifetime, never-to-be-repeated, knock-your-compression-socks-off experiences that ensure all other trips you take forevermore will simply pale in comparison. From a visit to the Aurora space station to a world tour on a Four Seasons jet, here are 10 of the very best holidays to take this year/life. 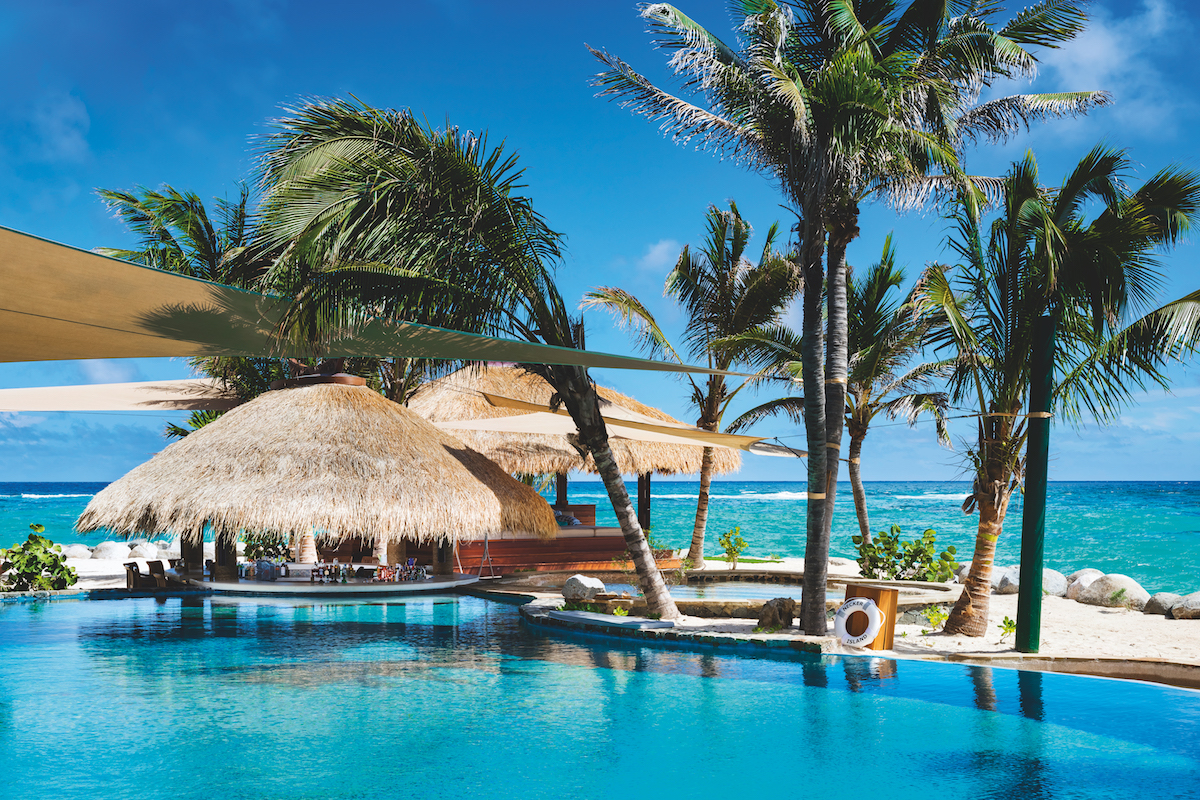 If there was ever a sentence to induce a crippling case of holiday envy in an instant, it would probably be: “Oh, just heading to Necker for the week.” After all, when you’re owned by the master of promotion, Sir Richard Branson, and when people so well-known they need only one name stay (Oprah and Obama, we’re looking at you), you’re bound to become the world’s most famous private island.

But here are some things you may not know about this ultimate idyllic getaway in the British Virgin Islands… Its 30 hectares are home to 200 flamingos, over 100 staff look after a maximum of 30 guests, 40 years ago Branson bought the island for just A$250,700, a decade ago it was worth A$83 million, and despite being severely damaged during Hurricane Irma in 2017, Necker is now reopened, bigger, better and more beautiful than ever. The whole thing is available for A$107,900 per night for 30 guests – or, you know, just you and the two big Os. 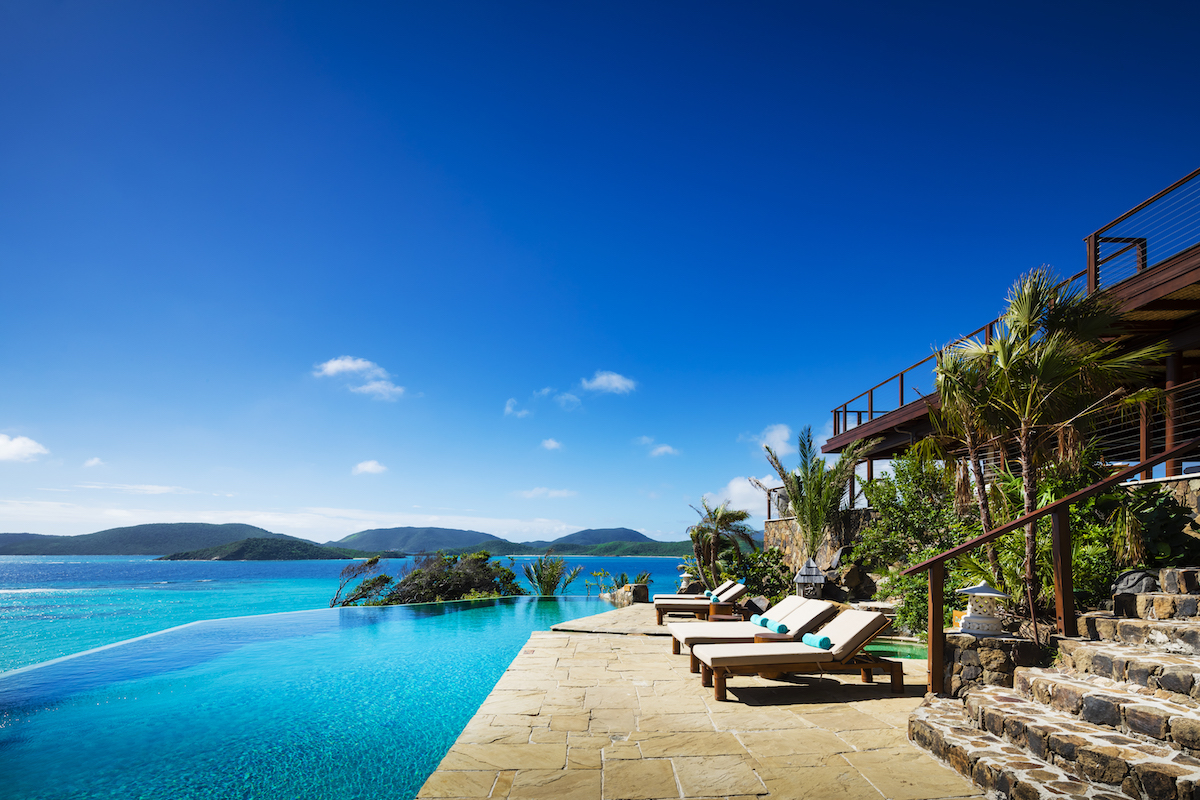 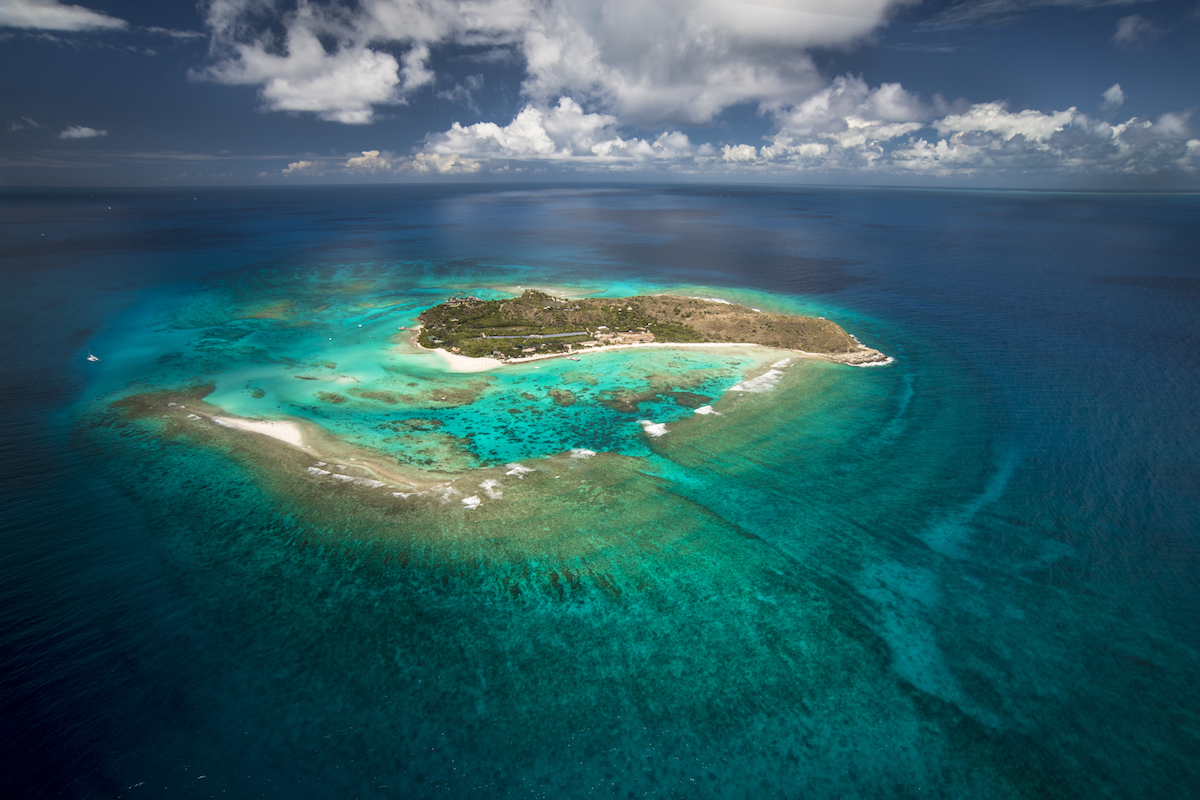 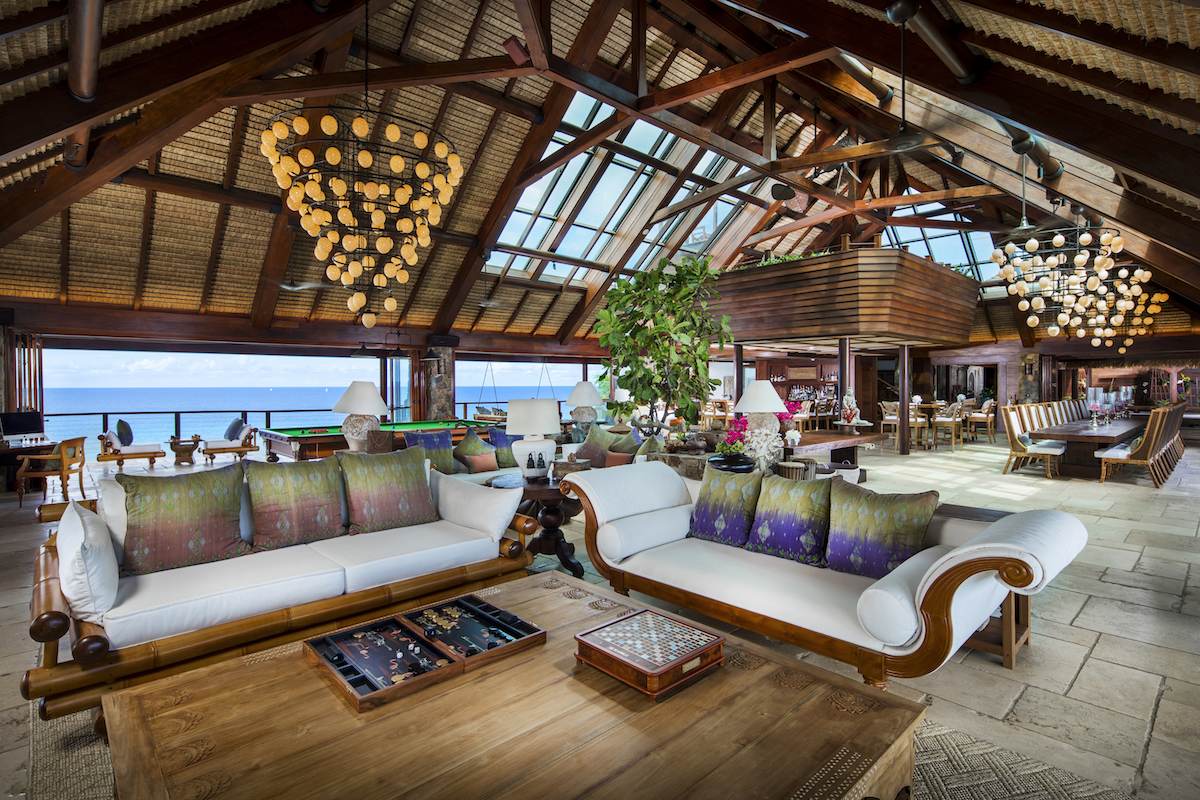 Want, quite literally, out-of-this-world holiday snaps? Always yearned to feel weightless? Got a penchant for vacuum-packed food? Then you should definitely reserve your seat aboard Aurora Station, the world’s very first luxury hotel in space. Scheduled to open in 2022, it will be the first fully modular space station, designed to take six people – four travellers and two crew members – on a 12-day stay, 321 kilometres above Earth.

According to Orion Span, the space company that owns Aurora, guests can “gaze at the northern and southern auroras through the many windows, soar over their home towns, revel in a virtual reality experience on the holodeck, and live-stream their loved ones back home via high-speed wireless internet access”. All you need is A$13 million (yes, you’ve read that right) for the pleasure, with a down payment of A$1.1 million reserving you a spot. But you better be quick: the company has reported that the first six months have already been booked out. 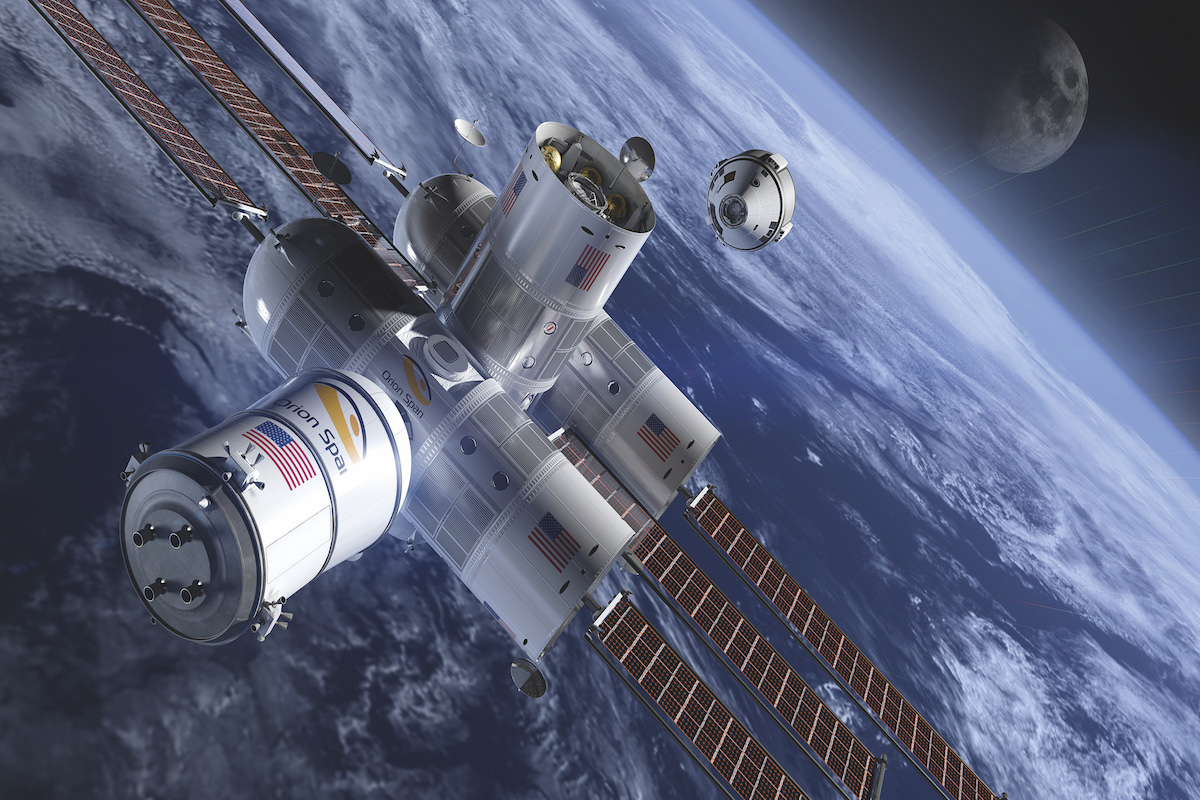 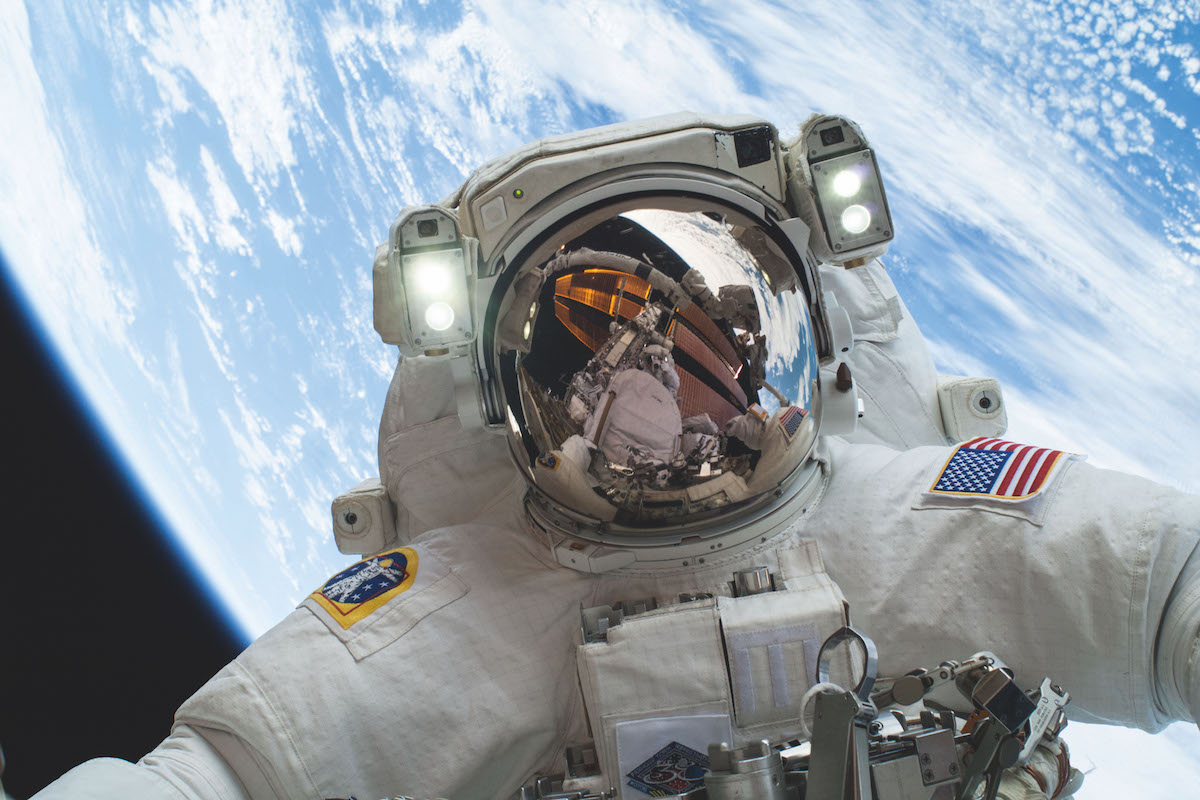 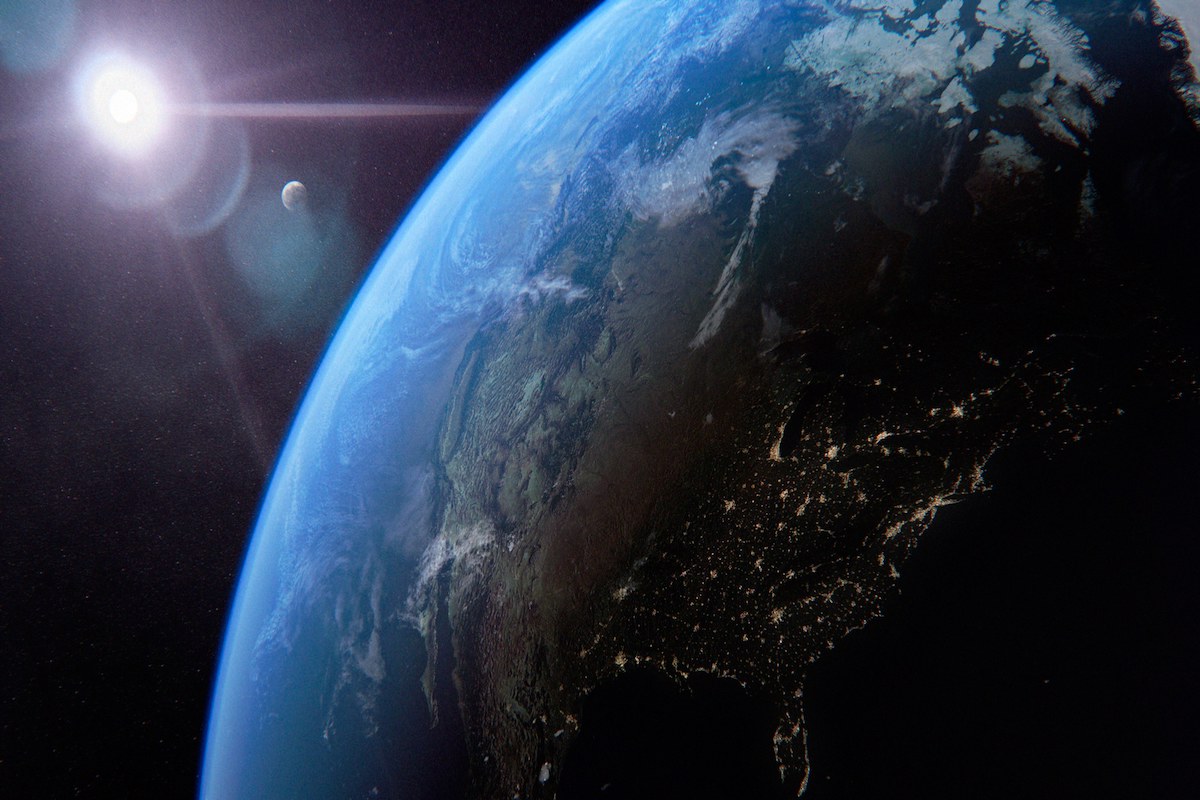 If you like your camping with a very large side order of glamour, then you need to get you and your LVWs (Louis Vuitton Wellingtons, naturally) to Ladakh for an ‘outdoor’ experience like none other. Offering so much more than a very fancy tent, The Ultimate Travelling Camp has introduced the epitome of luxury camping to the beautiful regions of Thiksey and Diskit in Ladakh, India, famed for their incredible scenery.

Explore the surrounding monasteries and monuments, fairs and festivals of the area, before retiring to your not-so-humble abode made completely comfortable with a four-poster bed, ensuite bathroom, in-house chef, private butler and glittering chandelier. Prices start at A$2,700 for three nights. 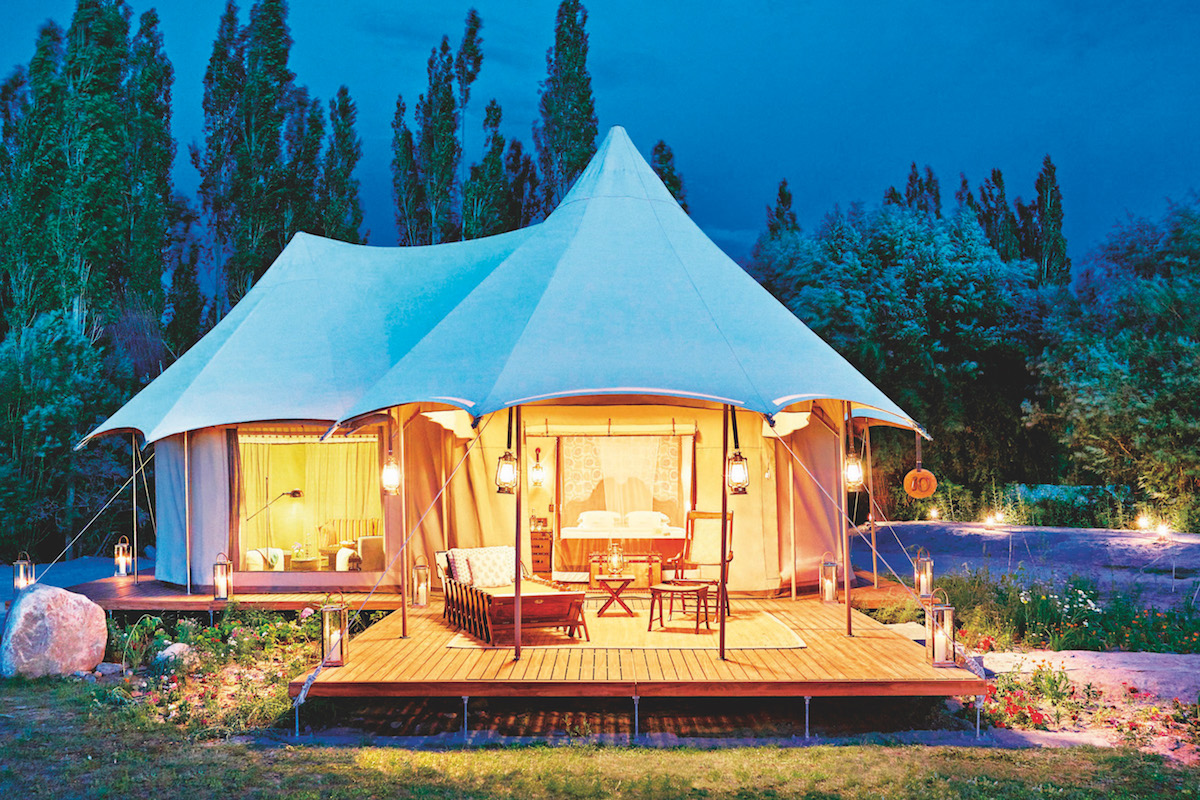 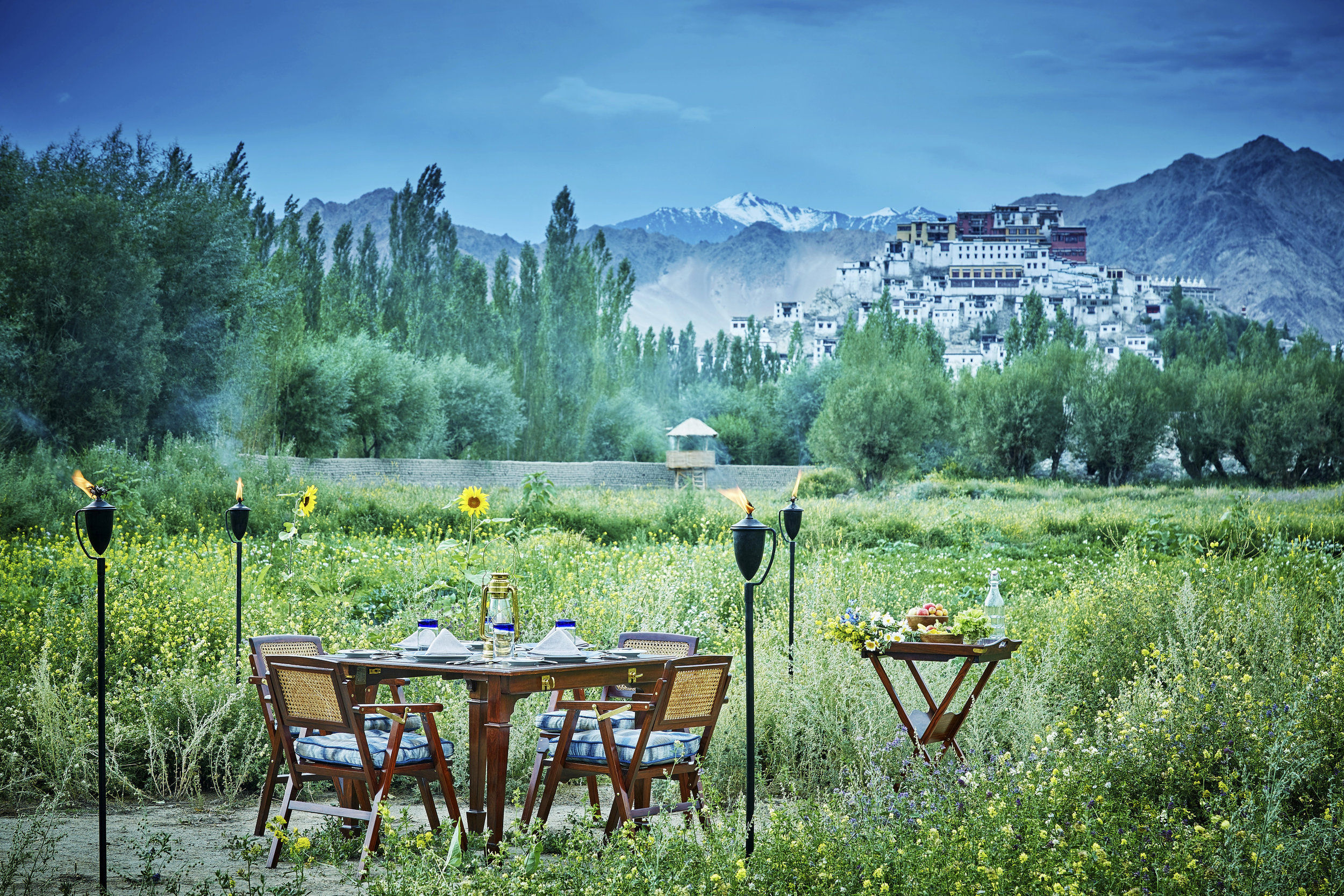 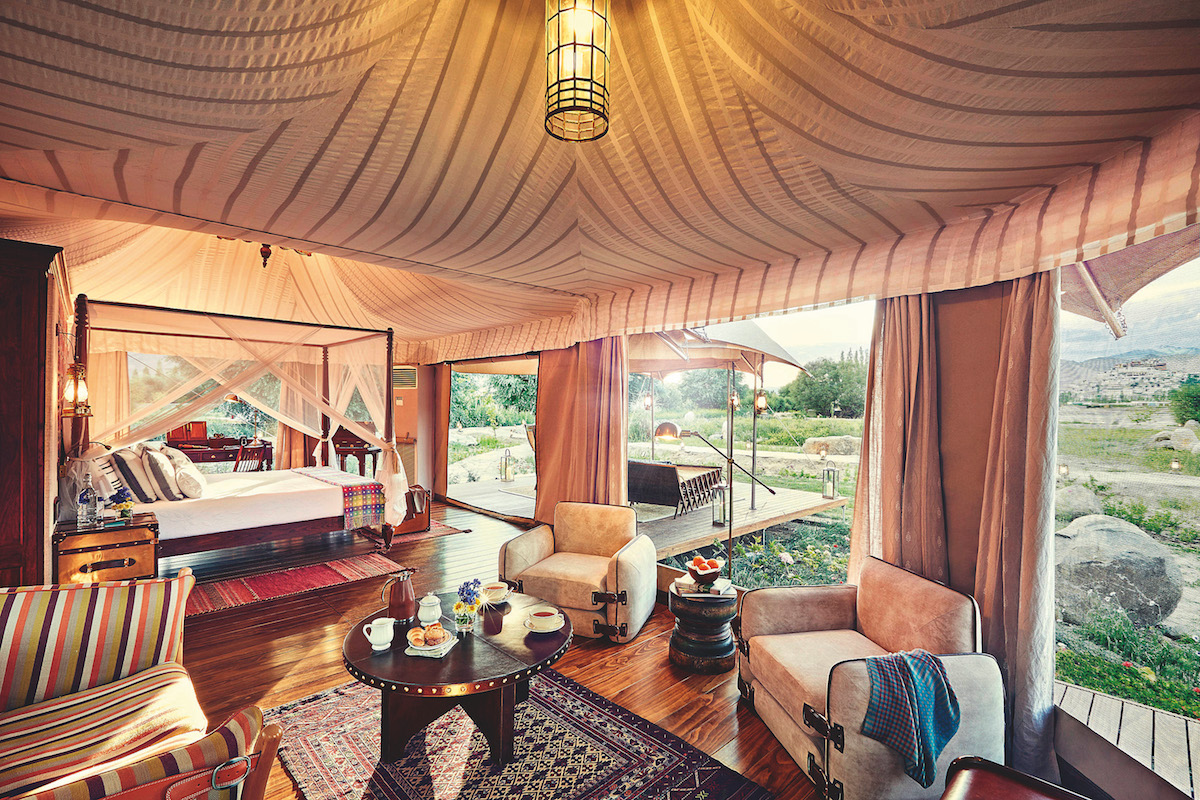 As the only company in the world to fly you into the interior of Antarctica in a private jet, White Desert loves luxury as much as it does adventure. Specialising in once-in-a-lifetime trips that have attracted the likes of Prince Harry and Bear Grylls, its epic Greatest Day Trip will blow your mind, and probably your budget too.

A 24-hour excursion that starts in Cape Town, you’ll board a Gulfstream 500 to fly over the Southern Ocean before landing on Ulvetanna Peak in Antarctica. Here you’ll meet your polar guides and before you know it you’ll be abseiling down glacial crevasses, trekking through mazes of ice-blue grottos, meeting colonies of penguins, or zip-lining over frozen lakes in the South Pole. You’ll finish with a gourmet meal on the five-hour flight home and be back before anyone’s even noticed you left. The price? A very cool A$270,000 for you and 11 of your nearest and dearest. 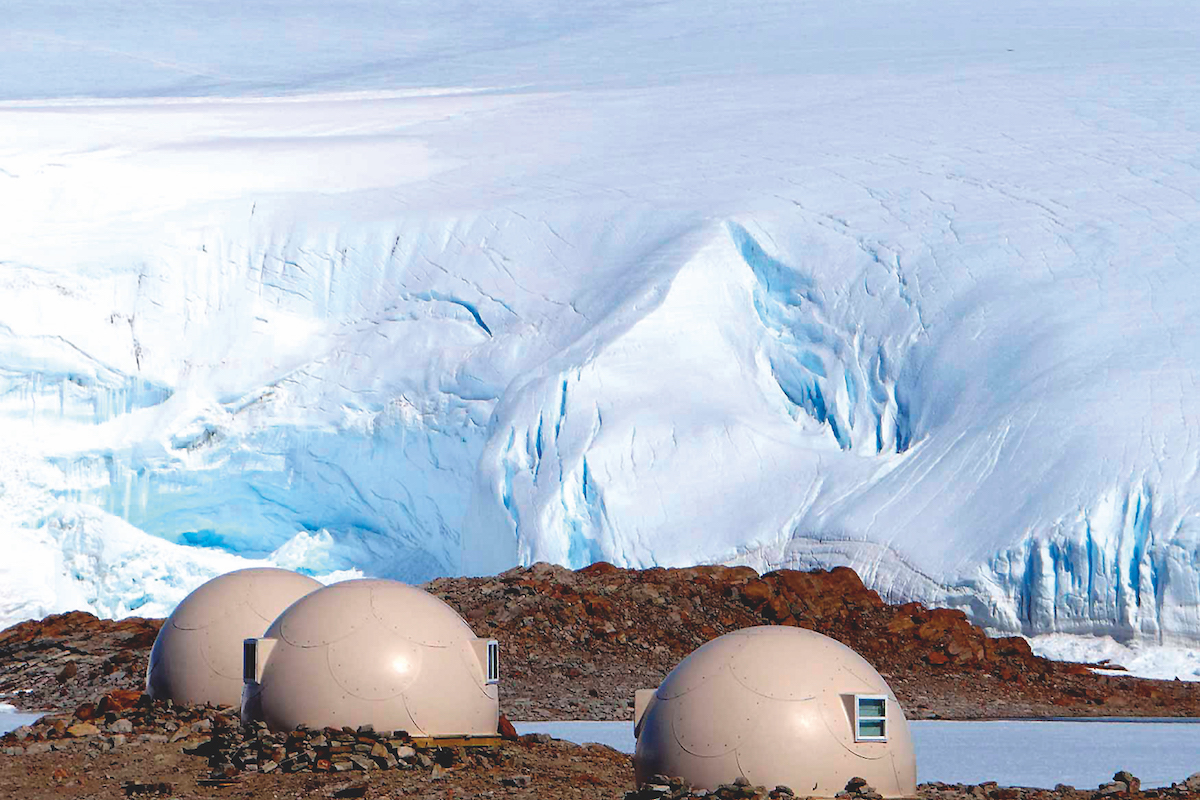 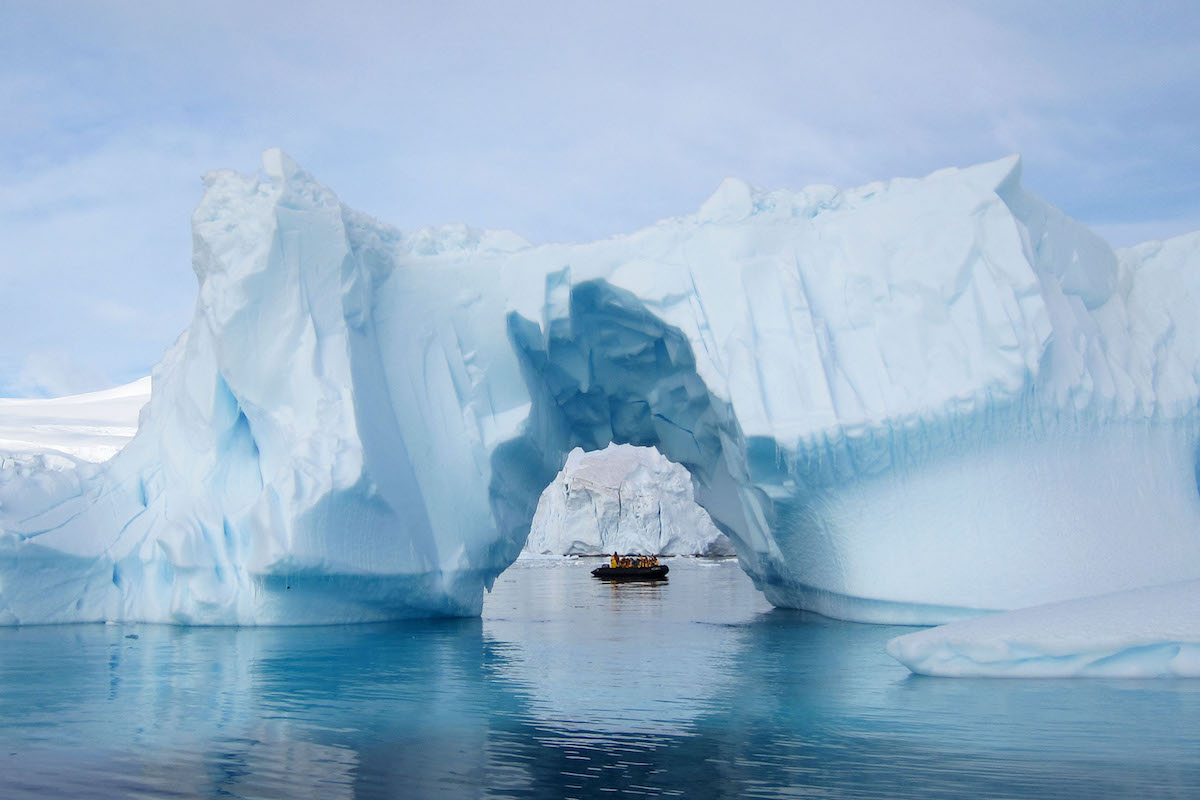 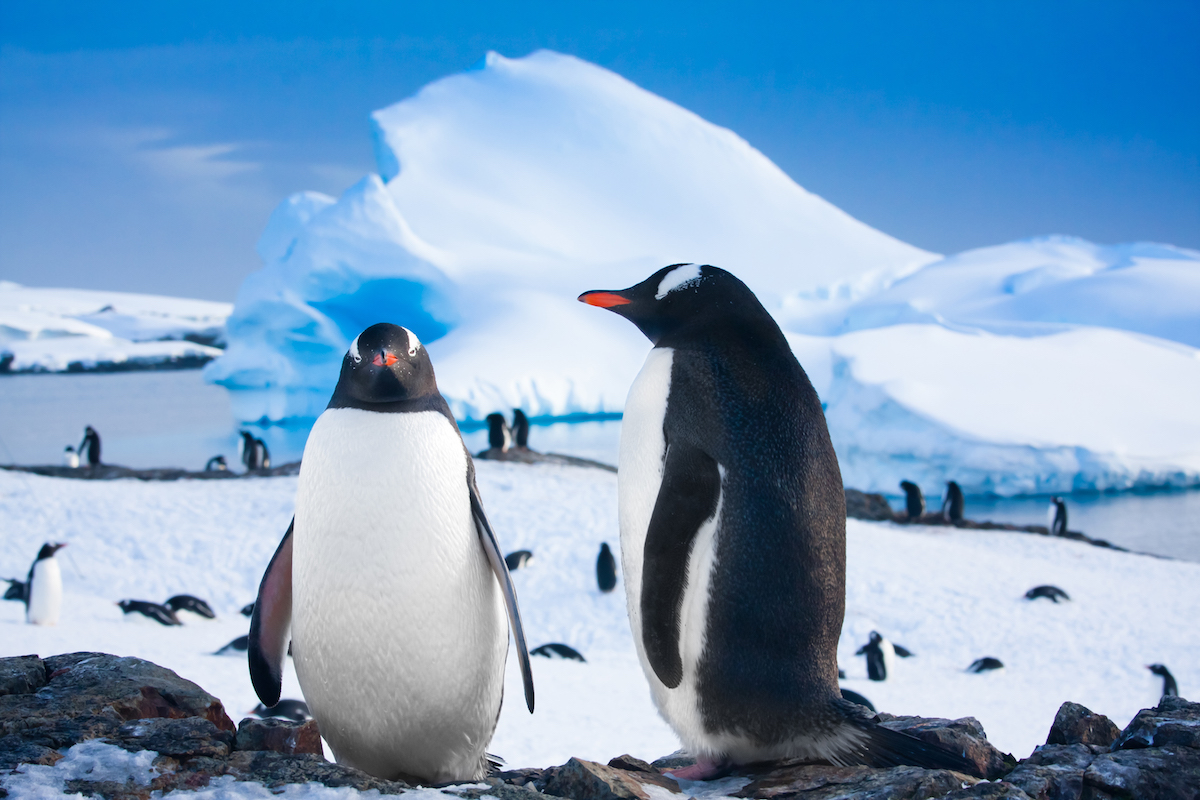 It’s one of the world’s most exclusive private island resorts and the ultimate millionaire’s hideaway for a reason – Laucala (pronounced Lathala) Island is four square miles of utter perfection. Once owned by publisher Malcolm Forbes (who loved the place so much he’s now buried there), Laucala was bought in 2003 by Red Bull co-owner Dietrich Mateschitz, who transformed it into a getaway for the super-rich, and whose three-bedroom Hilltop Estate is listed among the resort’s 25 villas.

Perched on the highest hill, this residence is billed as a ‘resort within a resort’, offering six rooms with nearly 11,00 square metres of bedroom space, panoramic views of the island, an infinity pool with waterfall, hot-tub, sundeck, private chef, chauffeur and nanny. Priced at A$67,000 a night (before tax), there’s a minimum five-night stay, and you’ll need to receive pre-approval in order to rent this jewel in Laucala’s crown. Suddenly makes you want it all the more, right? 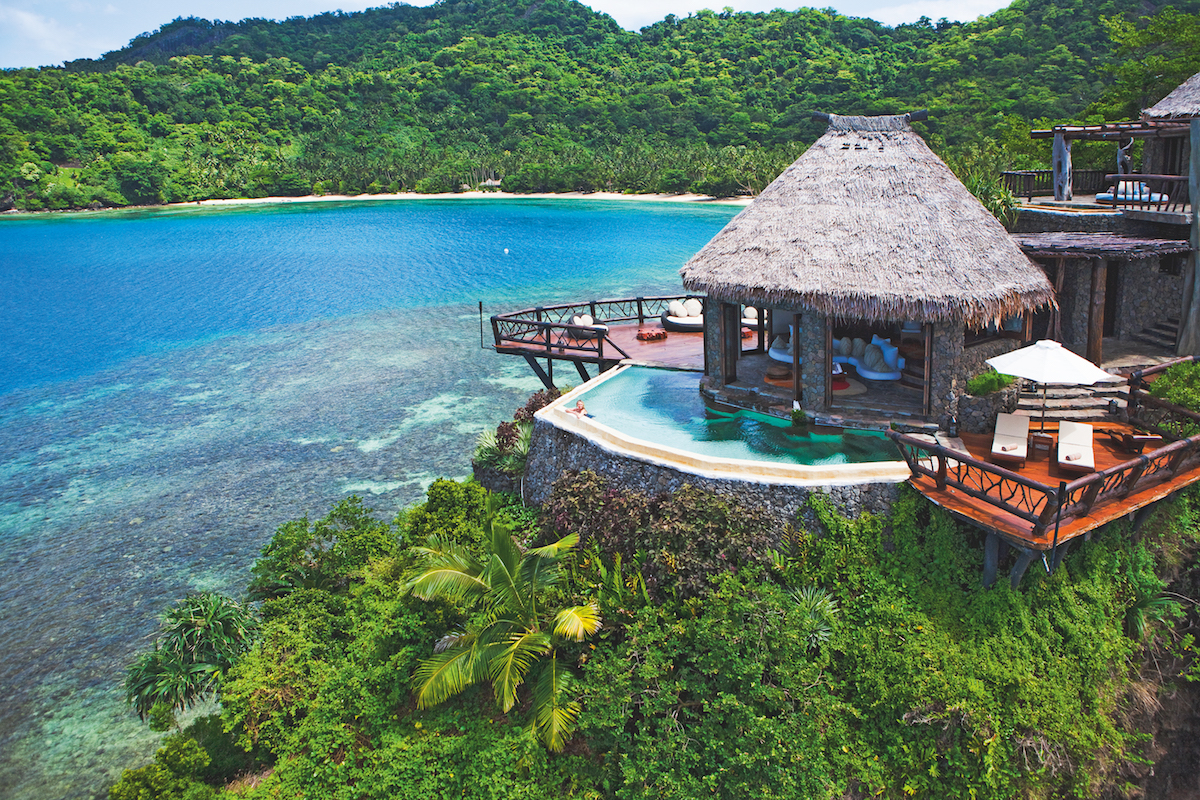 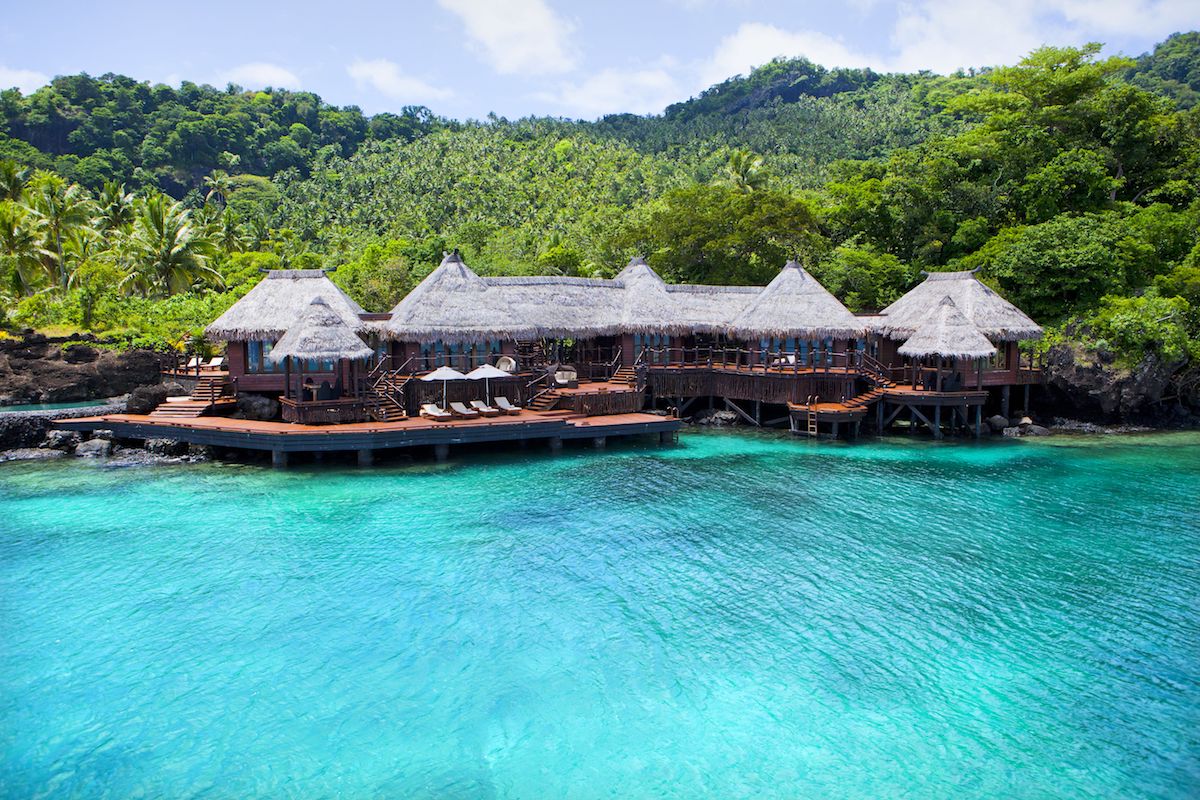 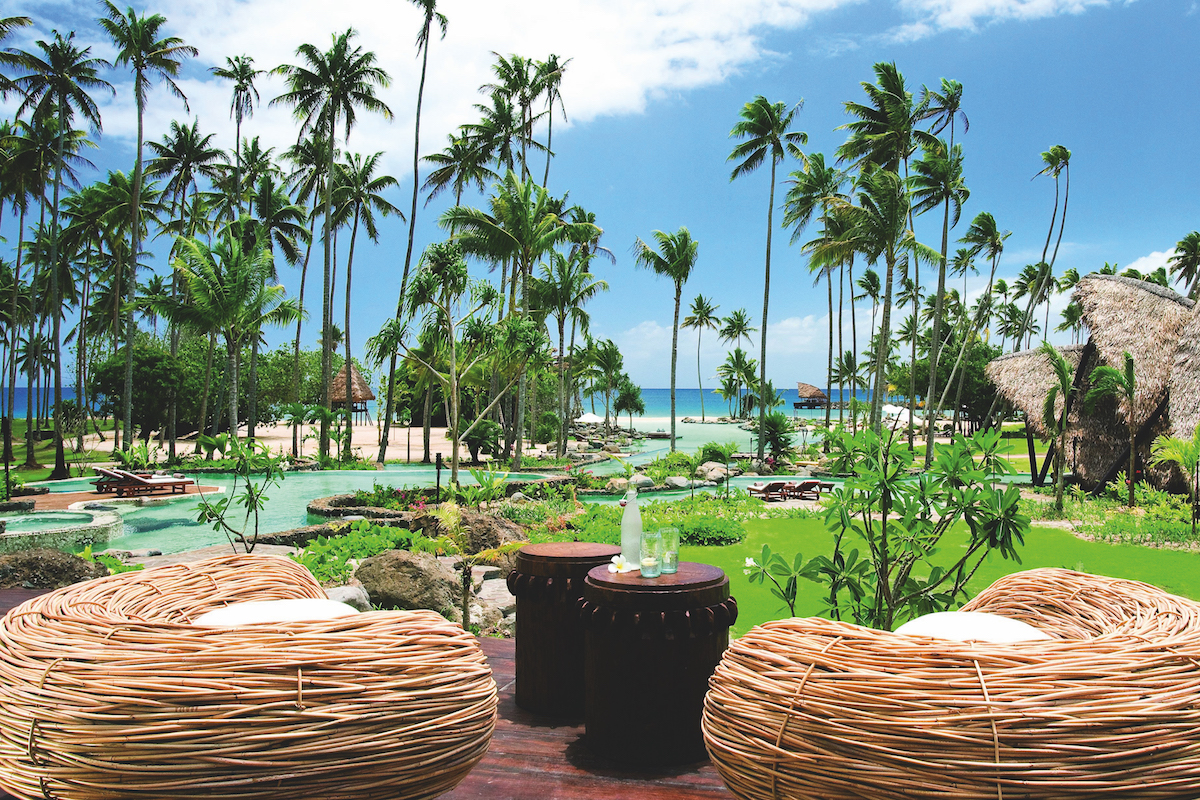 Balanced on the cone of an extinct volcano in one of the more quietly spectacular spots on the planet, Pikaia Lodge is one of the most luxurious hotels in the Galápagos archipelago. Set on 31 hectares, it’s a game changer for the area, with its 14 rooms, spa, swimming pool and film-room-cum-library. But it’s the 100-foot-long air-conditioned motor yacht that takes guests on voyages to view the Galápagos’ extraordinary geology that really sets it apart.

An expedition to see the wildlife and scenery that inspired Charles Darwin is, without question, a trip of a lifetime. To do it in comfort and style takes the experience to a whole new level. A week’s stay in the pool suite starts at A$14,200 per person 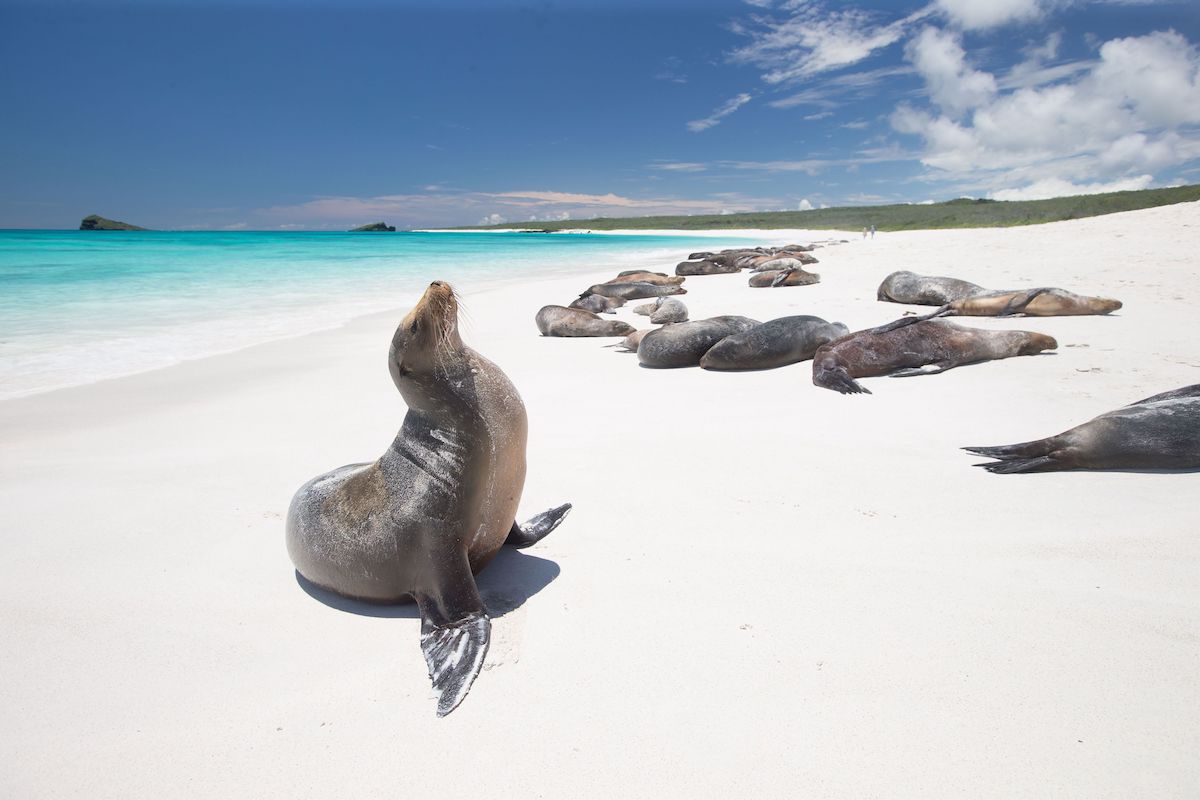 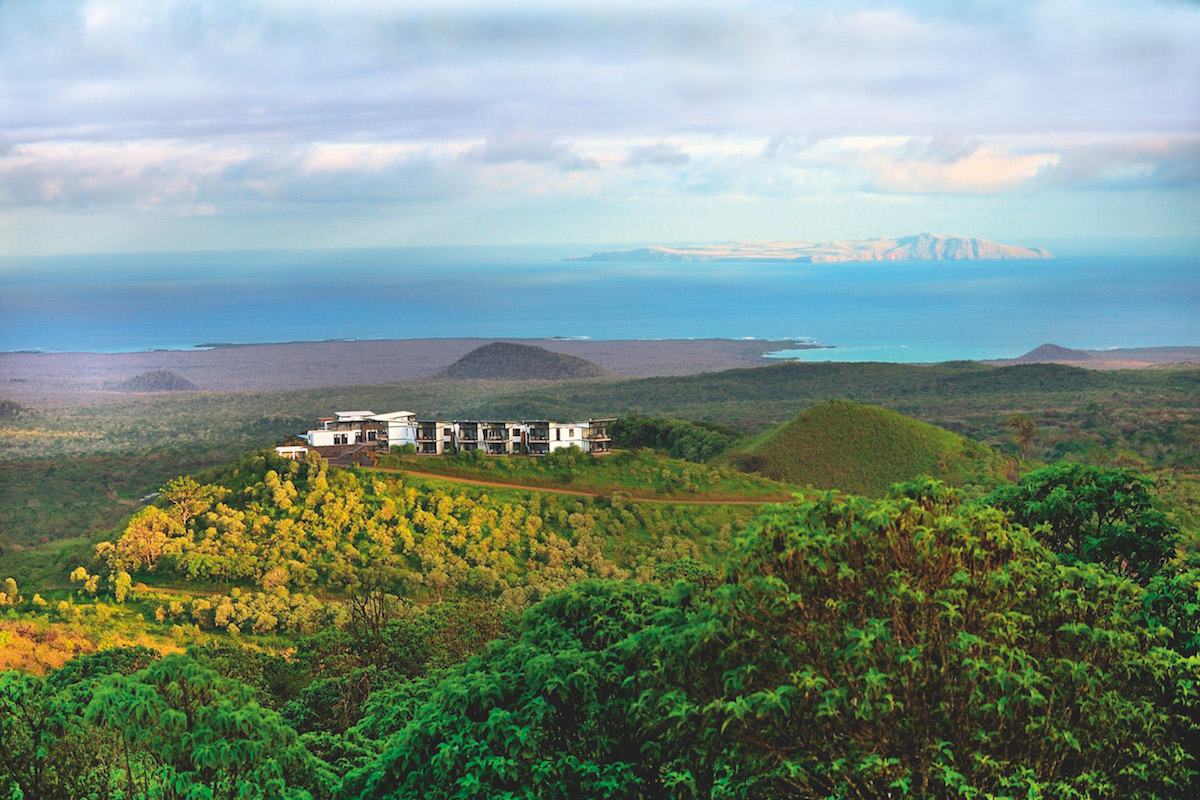 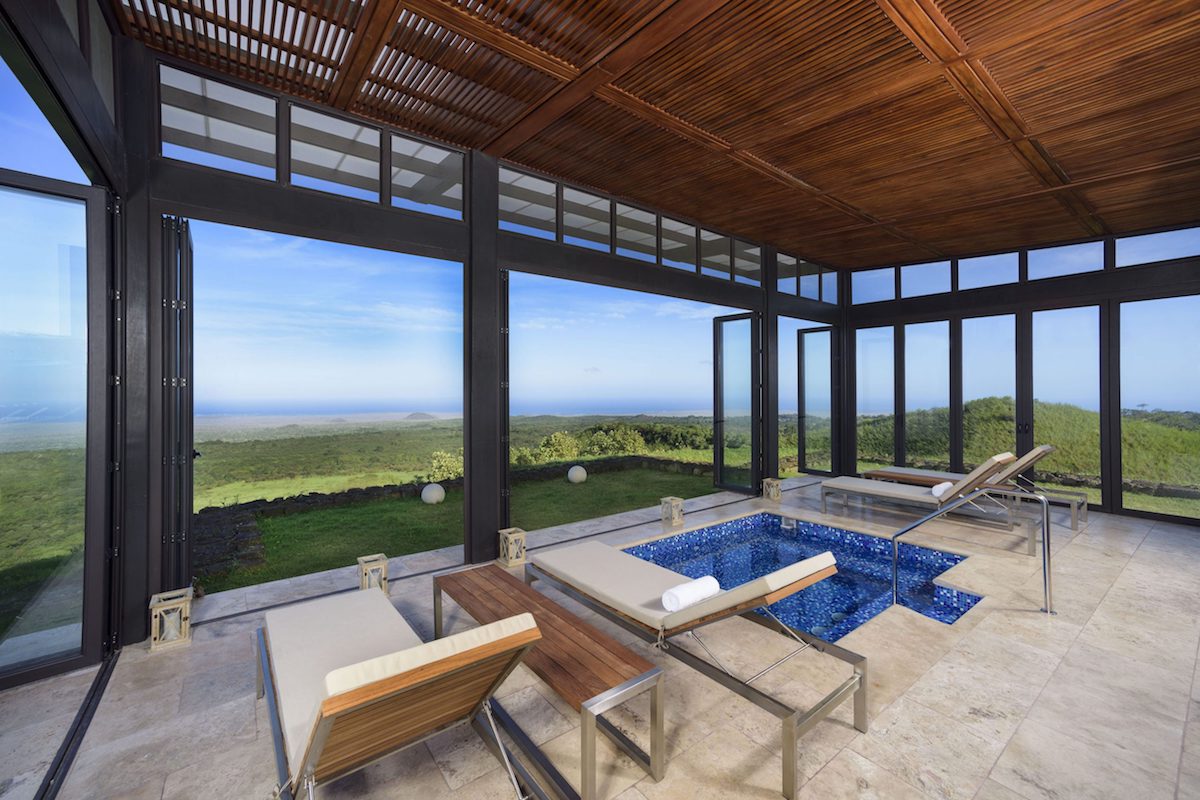 Do you worship at the altar of the Barossa Valley red? Then you’ll need to begin your pilgrimage to the prestigious St Hugo vineyard, situated in the renowned wine-producing region northeast of Adelaide, for the ultimate Sainthood Experience. For A$150,000, you’ll get three days like none other that include two-nights’ accommodation in a five-star establishment, an eight-course degustation dinner at St Hugo, a private flight to Coonawarra to select a vineyard row named in your honour and, the pièce de résistance, the chance to craft your very own exclusive red wine blend with St Hugo’s chief winemaker.

Once matured, your bespoke wine will be bottled and stored onsite, and for the next three years you’ll receive a supply of your own wine, hand-delivered to your home by a wine ambassador. Sounds like heaven? You need to be quick as the offer is valid until 31 March 2019. 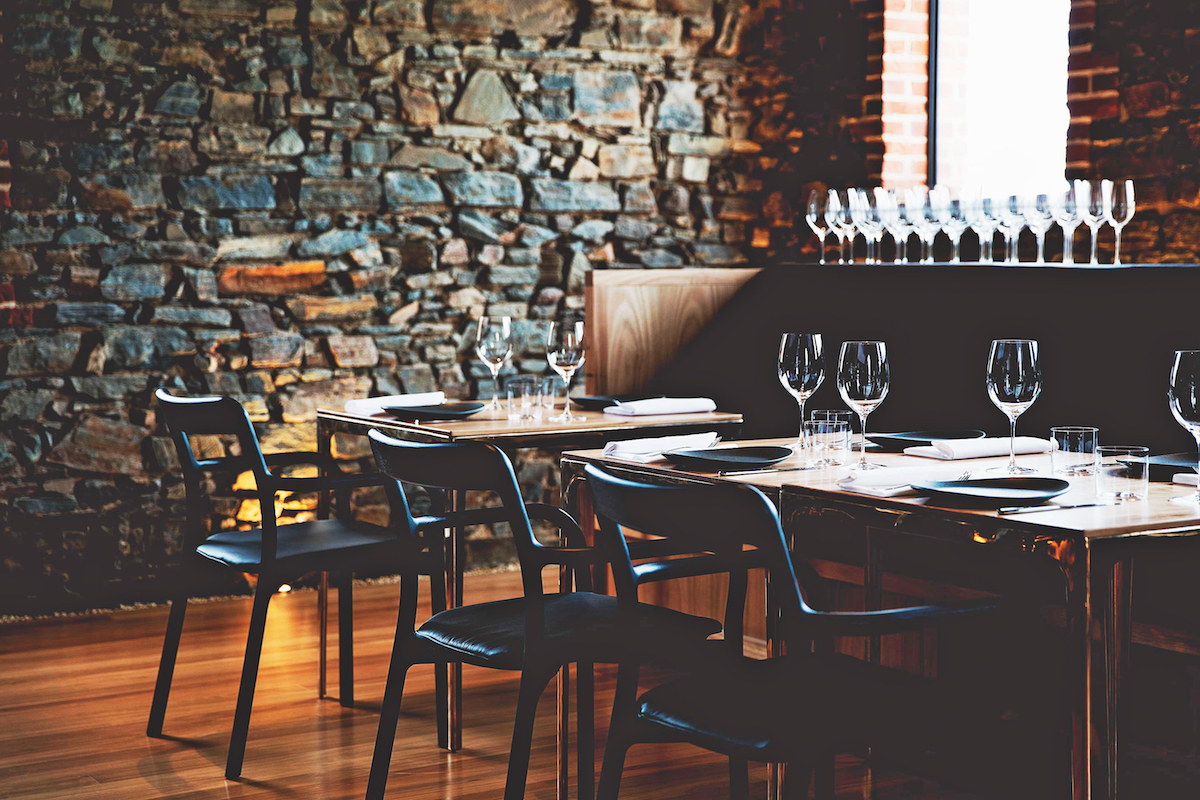 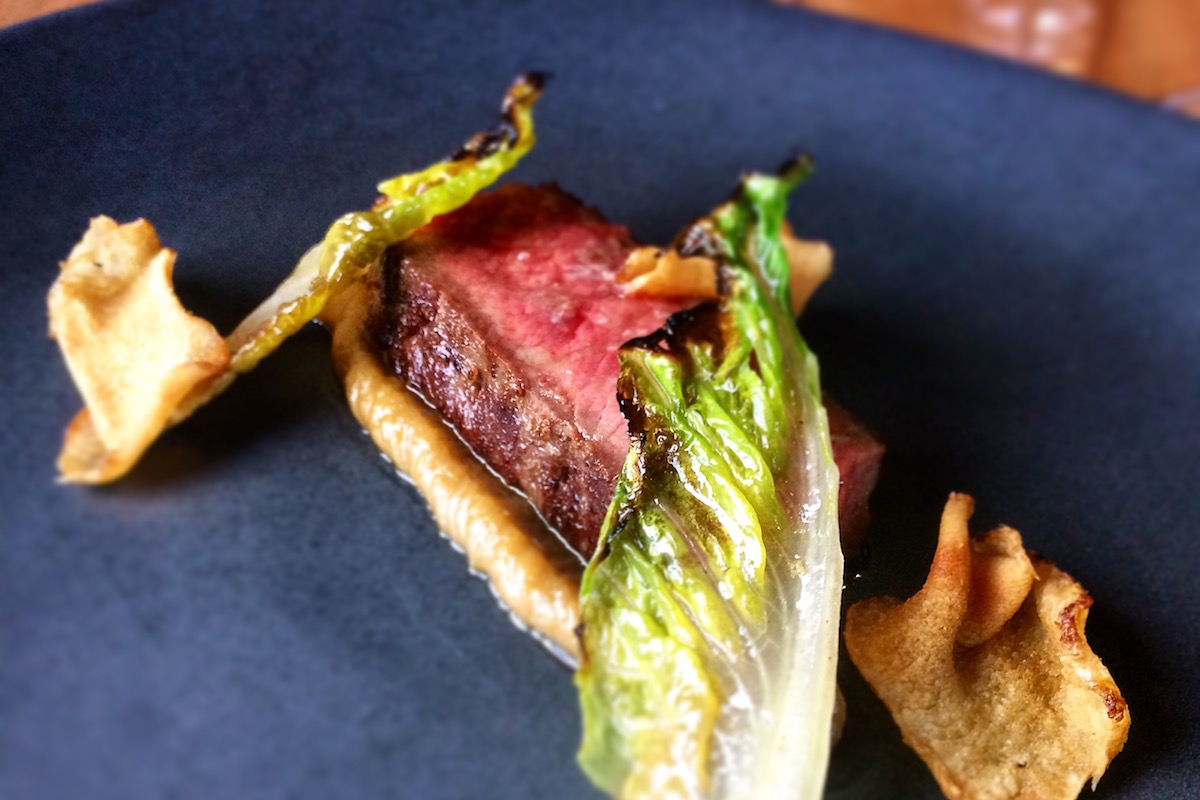 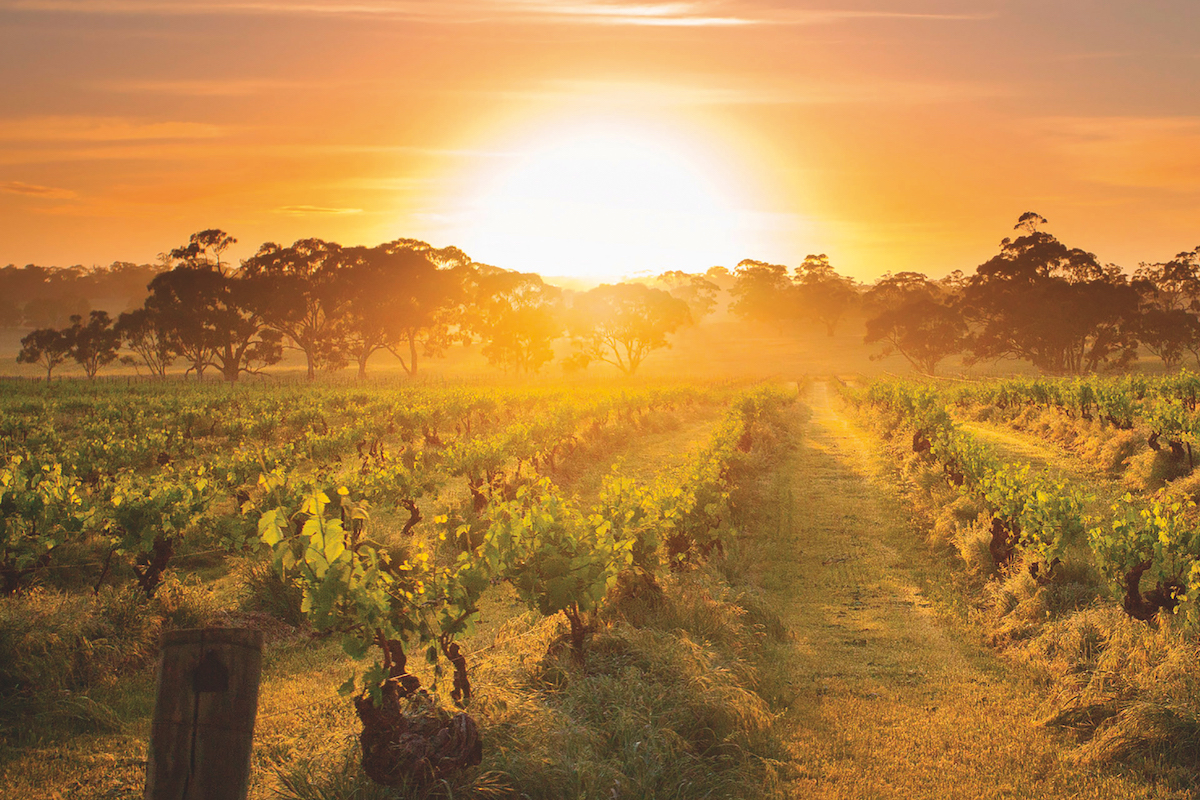 Overwater bungalows are so last year; 2019 is all about underwater villas, or rather the ‘world’s first’ (partially) undersea residence, The Muraka. Split over two levels, the villa has a living area above water (complete with a dining room, gym, pool and outdoor deck), while the main bedroom is five metres below the surface of the ocean, giving an entirely new meaning to the term ‘sleeping with the fishes’.

Four dedicated butlers live in a nearby structure to facilitate 24/7 service, and everything from a chef to an on-call fitness trainer, plus a speedboat for you to use at will, is included in the A$65,000-a-night price tag. 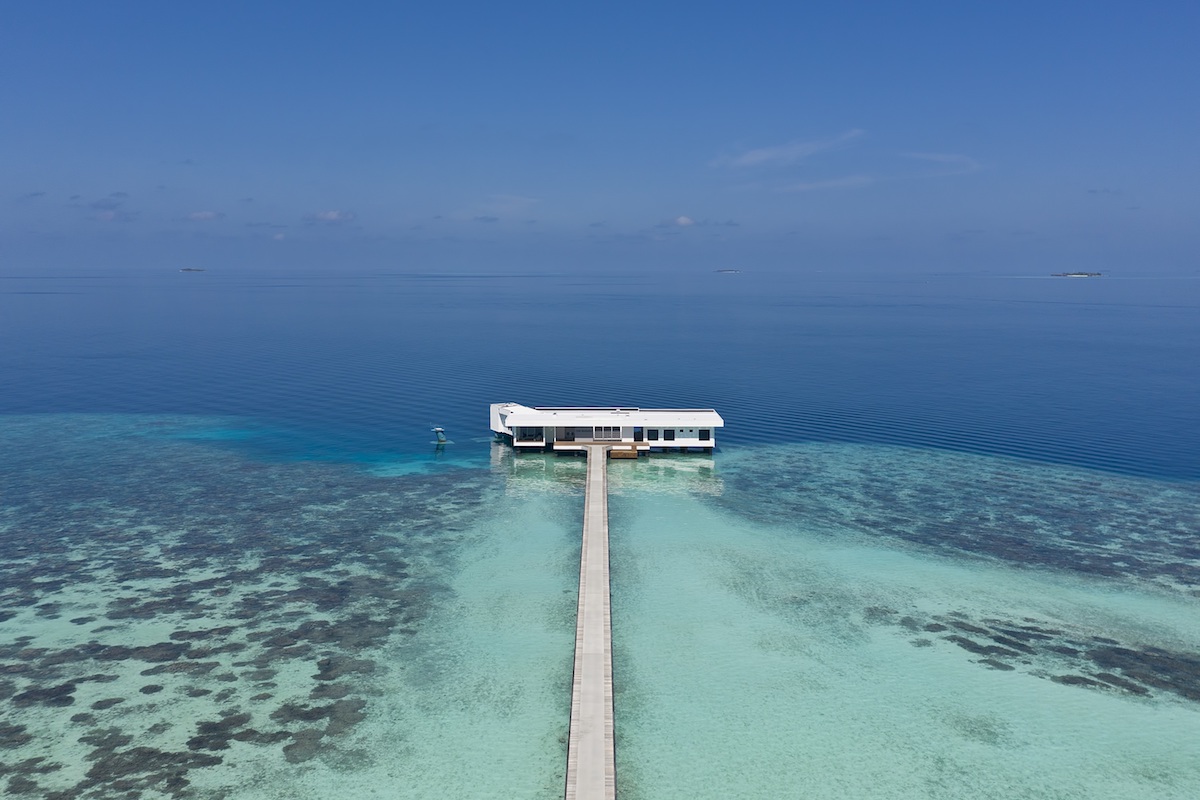 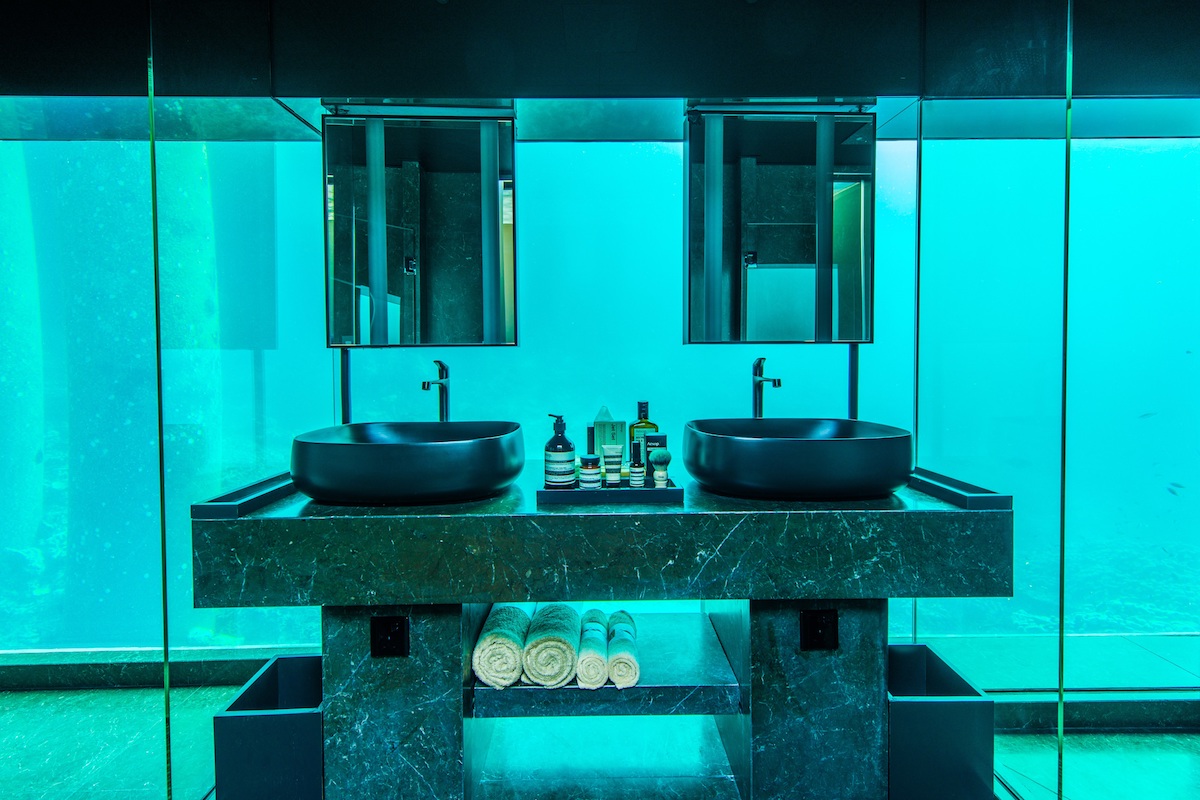 If you really want to get away from it all, but still do it in the lap of luxury, then you’ll be hard-pushed to find somewhere more remote and stylish than Deplar Farm in Iceland. Located in the utterly magical, isolated, northern Troll Peninsula, this 13-bedroom hotel gets its name from its past life as a sheep farm, which it was until recently.

It was acquired, along with several thousand hectares of adjoining land, by Eleven Experience, an adventure travel company. Now you can, of course, choose to while away the hours relaxing in the stylish spa and floating in the open-air, geothermally heated pool, or you can pull on your boots for a day of trekking, or jump into the saddle for an unforgettable experience of horseback-riding under the Northern Lights. For something altogether more adventurous, get your kicks with some serious heli-skiing. Deplar is surrounded by mountains, and guests can be at the top of a double-black run in as little as 10 minutes.

What’s more, so remote is the area that some of the ski runs are yet to be skied. Not today, or this week, but ever. If you’re the first to experience a run, you get to grant it a name. Now, that’s a souvenir worth bragging about. Prices start at A$6,300 a night and include all meals, house alcohol and two guide-led adventures a day. 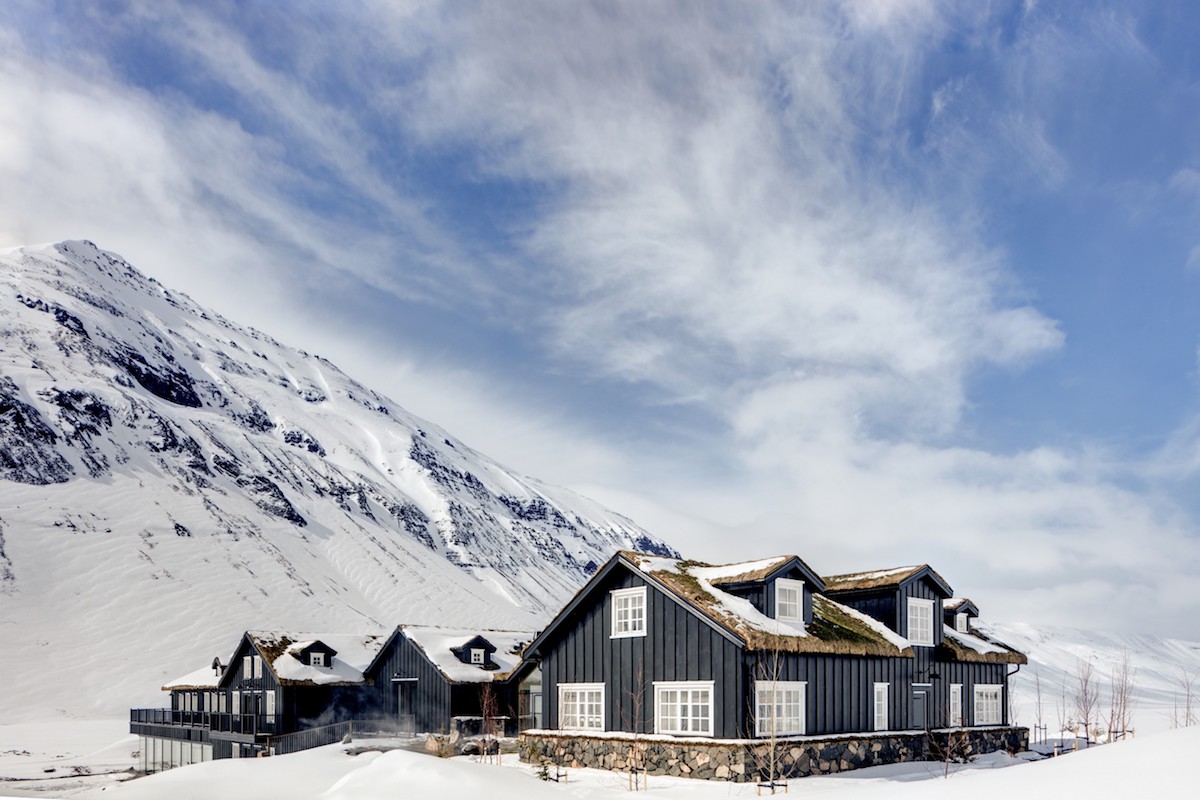 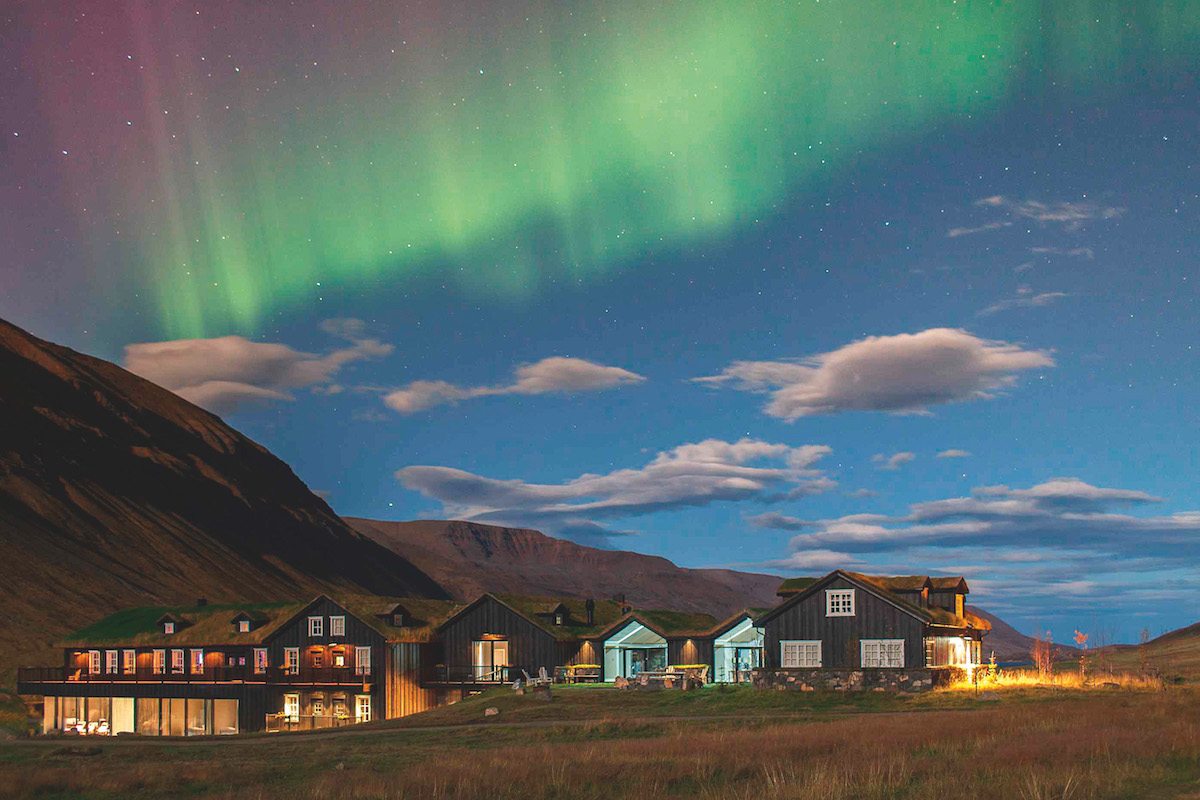 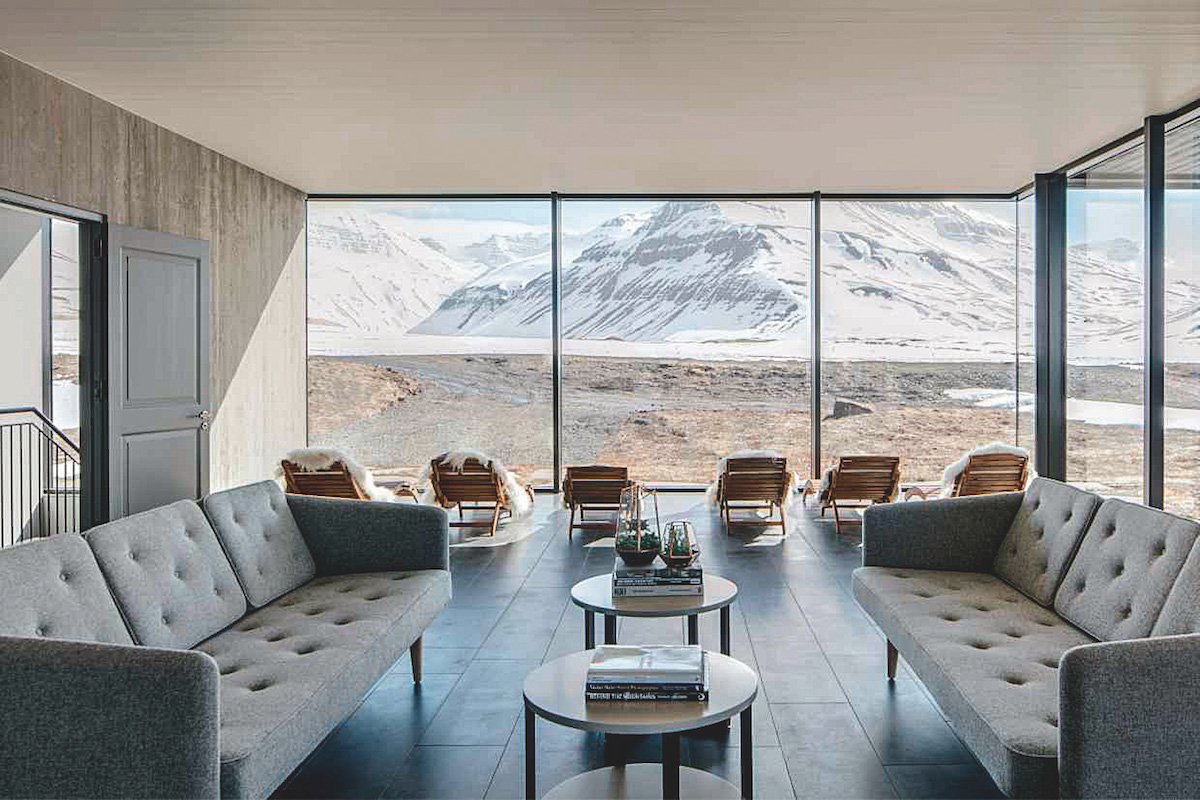 10. The Four Seasons’ World of Adventures

Take nine destinations, four continents, 23 days, 52 flatbed seats, 21 crew and one private jet and what do you get? A trip to beat them all, of course. Book a coveted ticket on the Four Seasons’ World of Adventures journey (3–26 June 2020) and not only will you get up close and personal with gorillas in Rwanda, meditate on a mountaintop in the Seychelles, cruise the Galápagos, learn to salsa dance in Bogotá, unlock the magic of Kyoto’s temples, awaken your senses in Marrakech, and go rafting on Bali’s longest river, but you’ll do it in the ultimate style.

That’s thanks to the custom-designed Boeing 757, which will whisk you from one jaw-dropping destination to the next in supreme comfort. There’s the Dom Pérignon at take-off, Bulgari eye masks at bedtime, Italian leather seats and Mongolian cashmere blankets – it would seem no expense has been spared on this luxury hotel in the sky. It’s not surprising then, that this state-of-the-art experience comes with a fairly luxe price tag of A$215,800 per person (based on double occupancy). However, if you’re going to make a proper dent in your bucket list, then this is surely the very best way to do it. 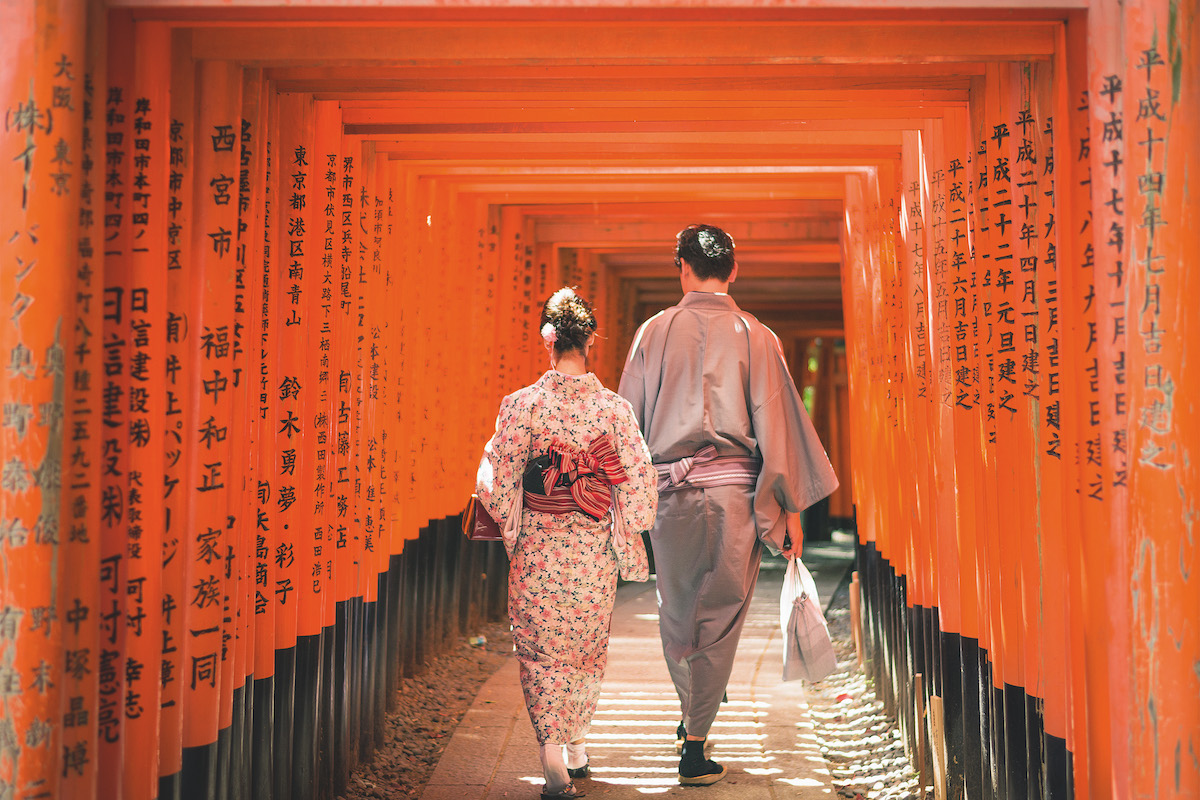 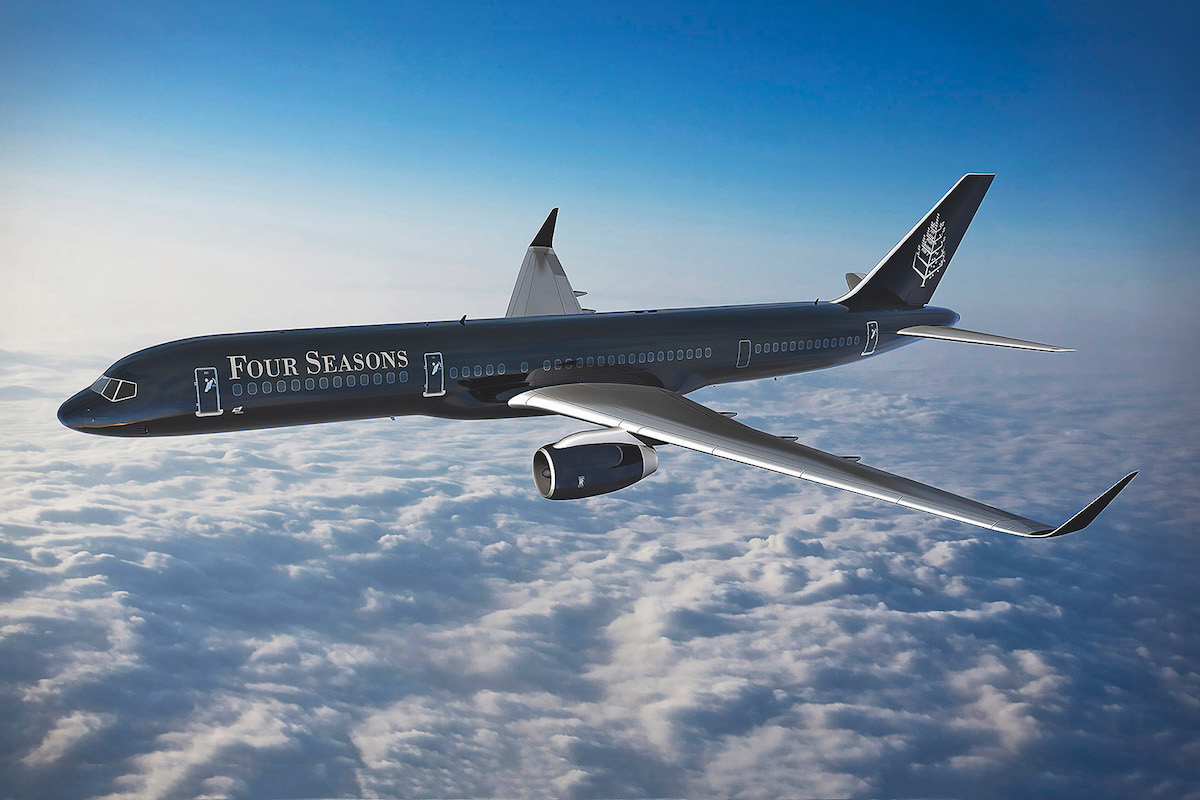 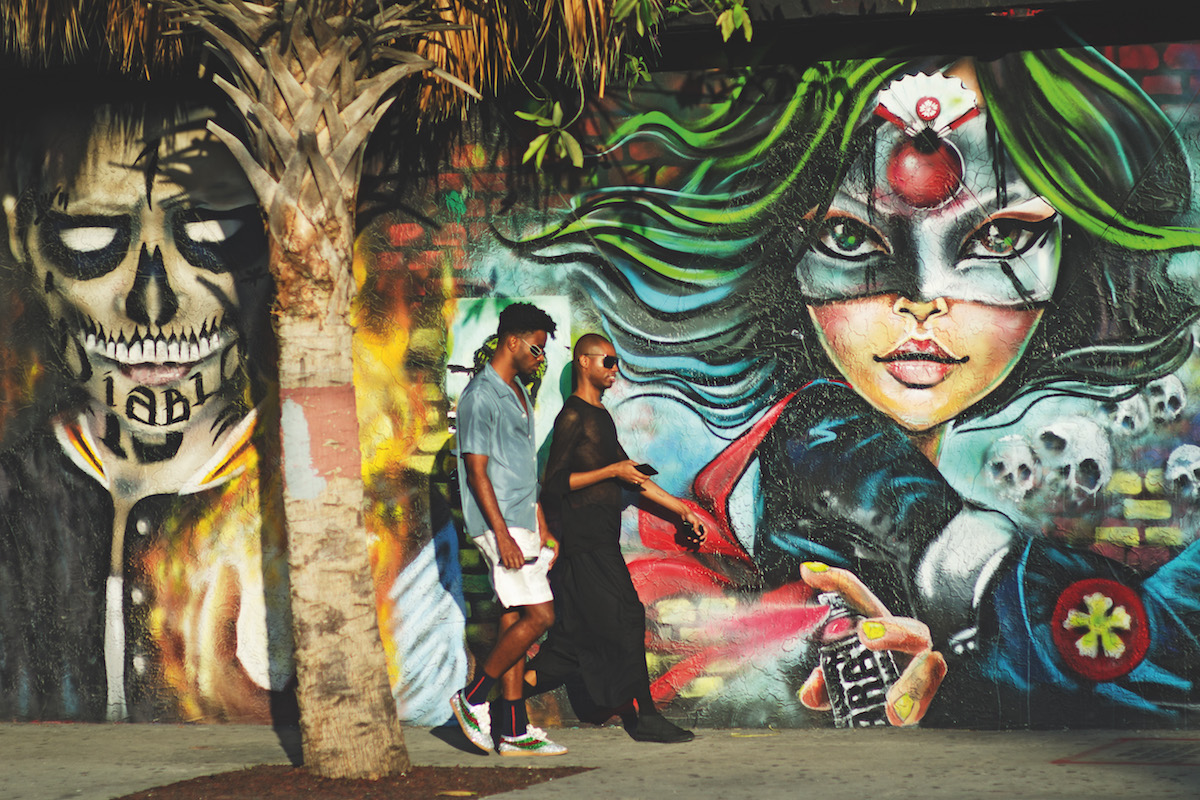 Susan Armstrong is a multi-award-winning editor and publisher with more than 20 years’ experience in magazines, newspapers, digital media, television and radio. She has overseen a wide range of publications over the years, in both the consumer and custom media spaces, locally and abroad. She joined The CEO Magazine in January 2017 as Editor-in-Chief before becoming the brand’s Content Director, a role that encompasses the print, digital and social platforms across the company’s four regions globally.