Staying in one of the gers at the Three Camel Lodge in Mongolia’s Gobi Desert is genuinely different to other hotels, and not just because the blankets are made of camel hair. 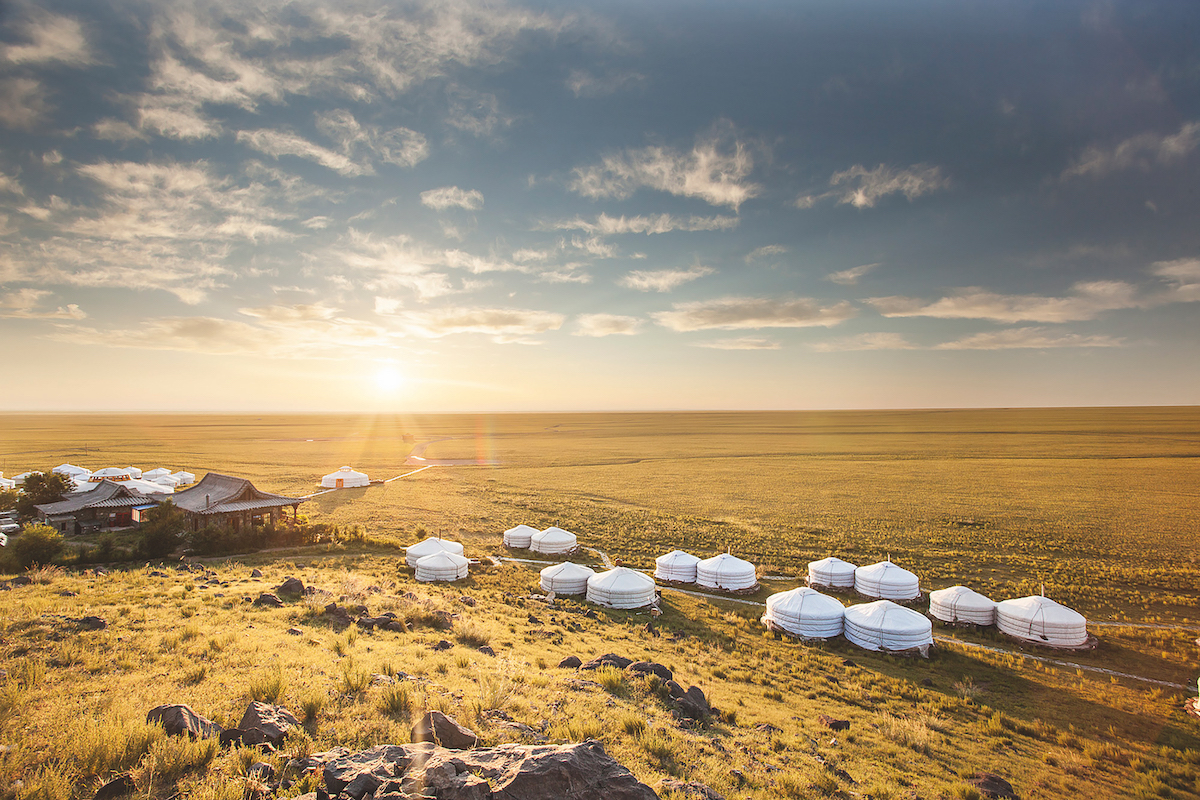 Essentially, all hotel rooms are the same. There are big ones, boutique ones, suite ones and little huts built over beautiful coral seas in far-off paradisiacal locations. When you’re inside them, though, they all tend to feel a bit similar – unless you’re at Three Camel Lodge.

Looking at a picture of a Three Camel Lodge ger you might be tempted to call it a yurt, but apparently that’s the Russian word for these ancient nomadic structures , which combine the convenience and transportability of a tent, or a teepee, with the solidity and protection from deadly cold of an igloo.

Mongolia has the greatest range in temperatures of anywhere on Earth, with summer maximums of 40 degrees Celsius and brutal winters that can hit minus, so a ger – built on a latticed wooden frame wrapped in a thick, cosy-feeling layer of felt, made from sheep and goats’ wool – needs to be hardy.

To be fair, Three Camel Lodge – one of National Geographic’s Unique Lodges of the World – doesn’t bother opening in winter, because there aren’t many tourists that brave, but the Gobi Desert is dotted with thousands of gers, which are still used in the traditional fashion by locals who continue to follow the nomadic lifestyle of their proud, and war-loving, ancestors (in the 13th and 14th centuries Genghis Khan and his heirs created the largest contiguous empire the world has ever seen).

And not just a few of them, either. While more than half of the country’s 3.1 million population now live in the bustling city of Ulan Bator, a third of its people are still very much nomads, who pack up their gers (a process that takes just 20 minutes) and move vast distances, usually at least four times a year, to keep themselves, and their giant herds of goats, sheep, camels and, of course, their beloved horses, alive.

There are a staggering 30 million herded animals in Mongolia and every time you open the door of your ger at the Three Camel Lodge it seems like at least a thousand of them are wandering, or galloping, past. It’s like a slightly more pastoral version of the African savannah.

There is something truly timeless about seeing dozens and dozens of big, thick-haired horses grazing on what seems like endless green plains in front of you.

In summer, at least, there is nothing desert-ed about this corner of the Gobi (other than the fact that nothing seems to grow more than about 10 centimetres high, and there are no trees at all), because it’s largely green. 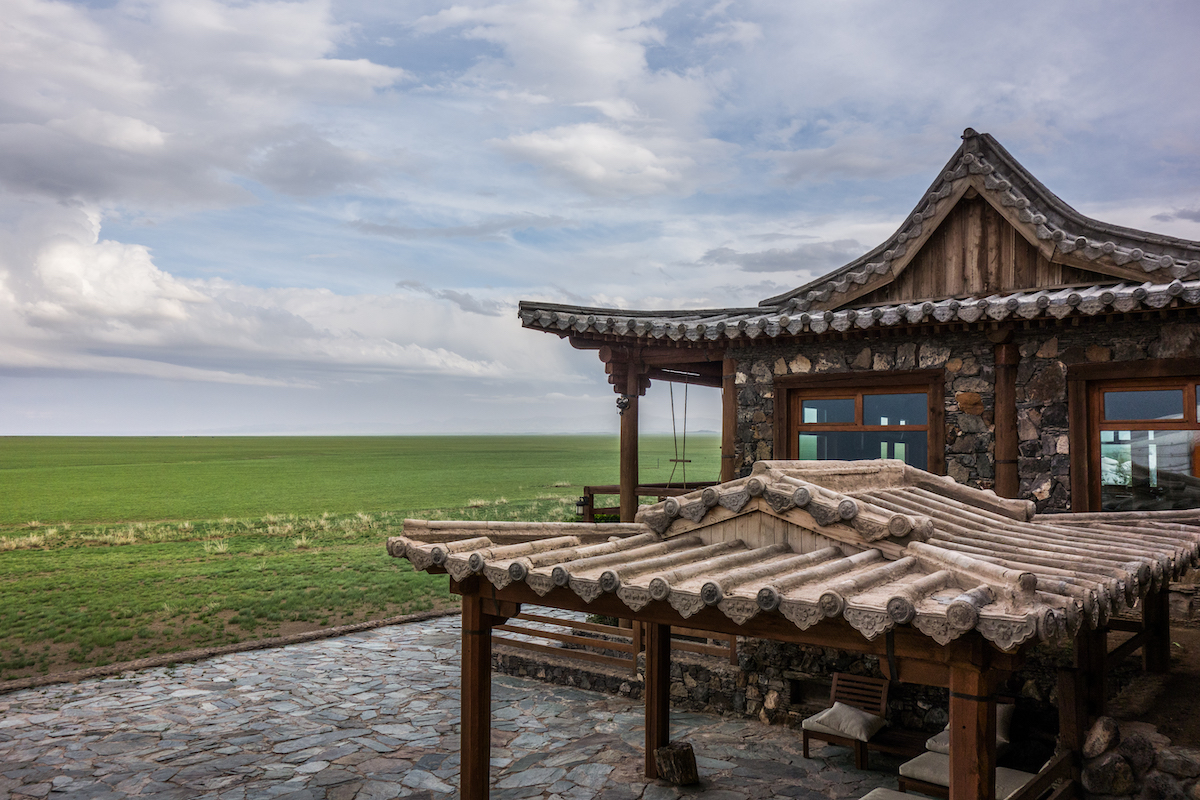 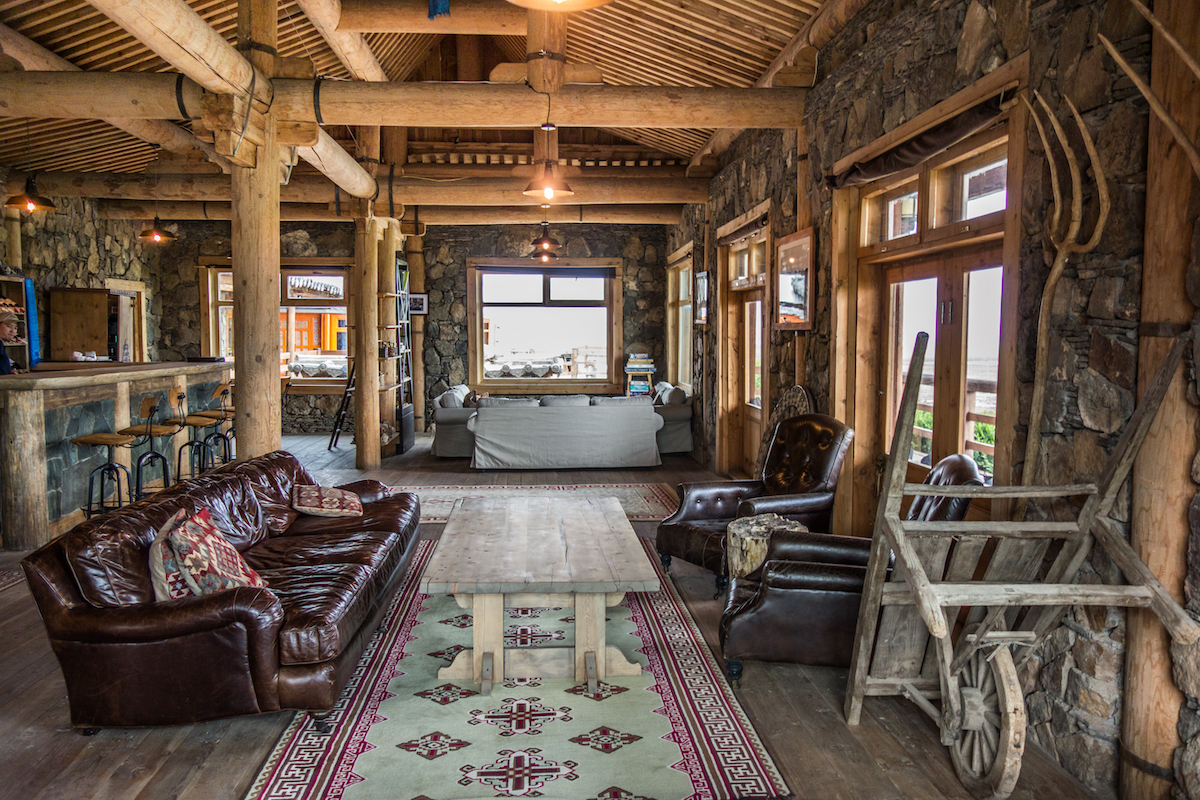 The ground cover is a mix of coarse grass and, bizarrely, wild chives, which give the air an interesting scent, and the original Mongolian beef a wonderful flavour (which is only added to by the high salt content of the ground).

Not only does the lack of any kind of sizeable foliage create open horizons that widen your eyes and your brain, it means that the wind here can play strange tricks on you.

Seeming to build up speed, and noise, over hundreds of kilometres, it makes percussive sounds like nothing I’ve ever heard; a looming, booming rush of air that just as quickly drops away, back to the kind of silence you can only get when you’re this far from anywhere.

And you can feel wonderfully alone out here, because the Gobi is vast, taking up a third of Mongolia, which just happens to be the most sparsely populated country on the planet. Your ger, then, becomes a warming and fascinating place to occasionally get away from all that space.

While a typical, traditional one of the same size would host a family of six or eight, all sleeping on the floor together, guests here get two joined together, one with a huge bed beneath a glass oculus that allows you to see the stunning starry skies at night, and another with an impressive stone-floored bathroom.

It’s the kind of luxury that would be unimaginable to the native people, but the interlocking timber walls would be entirely familiar to them, as would the sloping of the roof.

In these unique lodgings, you really do feel like you are soaking up the local culture by immersing yourself in it, which you can also do by taking a horse ride across the plains (or a mountain bike, or a ride in a motorcycle sidecar, if you prefer).

What you can’t do is sit on your phone or surf the web on your computer because, rather delightfully, there’s no mobile coverage or wi-fi at Three Camel Lodge.

Undraa Buyannemekh, the diminutive director of the lodge, says guests, all of whom are warned of this in advance, gradually shift from suffering through FOMO without their devices to experiencing what she calls JOMO – the Joy Of Missing Out. 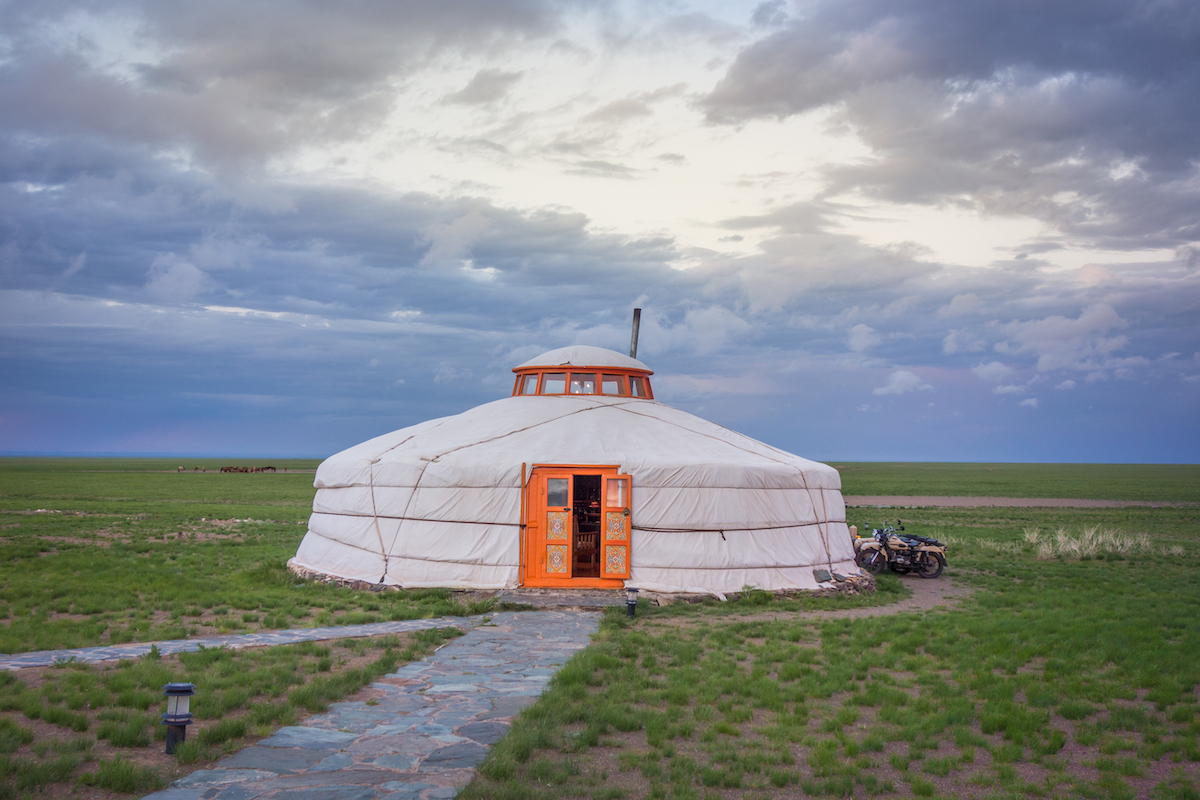 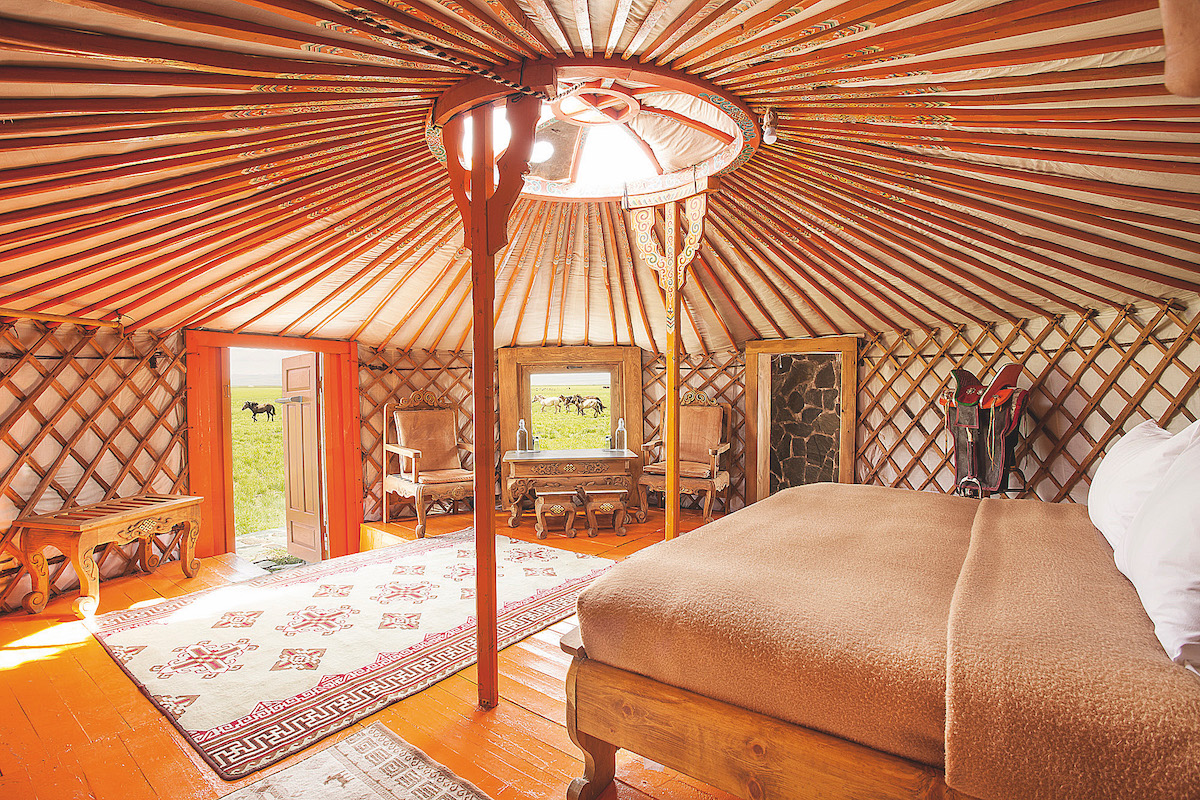 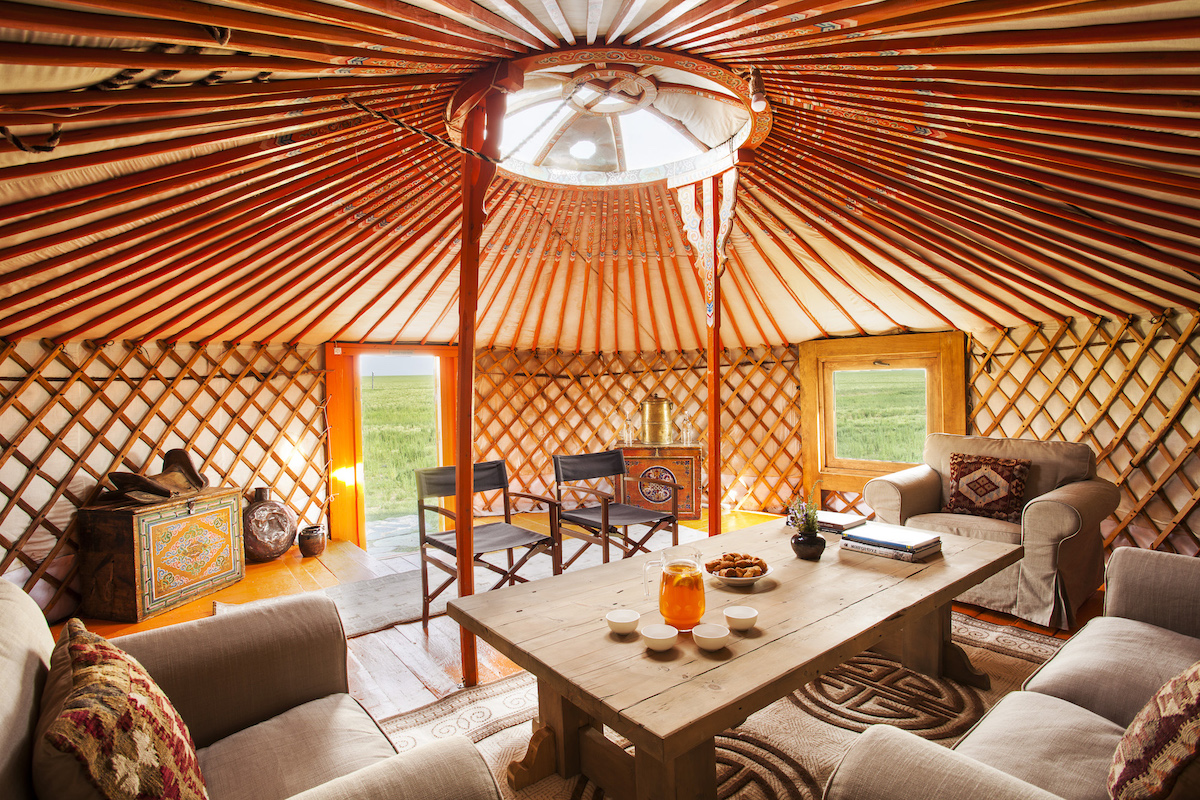 “People tend to really enjoy it, because it genuinely gives them a chance to get away from it all,” she says. “But that’s just a small part of what makes coming here different. Mongolia isn’t like other places, and it isn’t on anyone’s top-10 lists. We tend to get experienced travellers coming here; typically they’ve been to 50-plus other countries first.”

“People have this perception that it’s probably similar to China, but it’s actually completely opposite; the language, the food, the fact that so many people are still living that nomadic lifestyle.”

“And it’s that combination of nature and culture that attracts people. It’s very raw, and untouched and vast, and it hasn’t been invaded by mass tourism.”

“There’s no sense of exposure and, depending where you go, you could even be the first person to explore a particular area, so there’s that real sense of adventure that you don’t get elsewhere.”

Of course, unique experiences don’t come cheap (and be warned that getting to and from Mongolia with its national airline can be an adventure in itself).

Frankly, the Lodge’s boortsog – a kind of Mongolian donut served with lemony honey and sour cream, and at breakfast, lunch and dinner – is almost worth that price on its own.

When you travel a lot, all countries can start to feel a bit like hotel rooms, if not exactly the same, then at least similar to other places you’ve been.

But Mongolia is not like that because sitting on the step of your ger at the Three Camel Lodge, watching the sunset over the timeless, endless Gobi, really is like nothing else.

Three Camel Lodge is open from May to October , and prices start at $2680 per person