The Custom Line Navetta 30 production may have been slightly delayed, but it doesn’t stop us dreaming about sailing away on the opulent yacht. 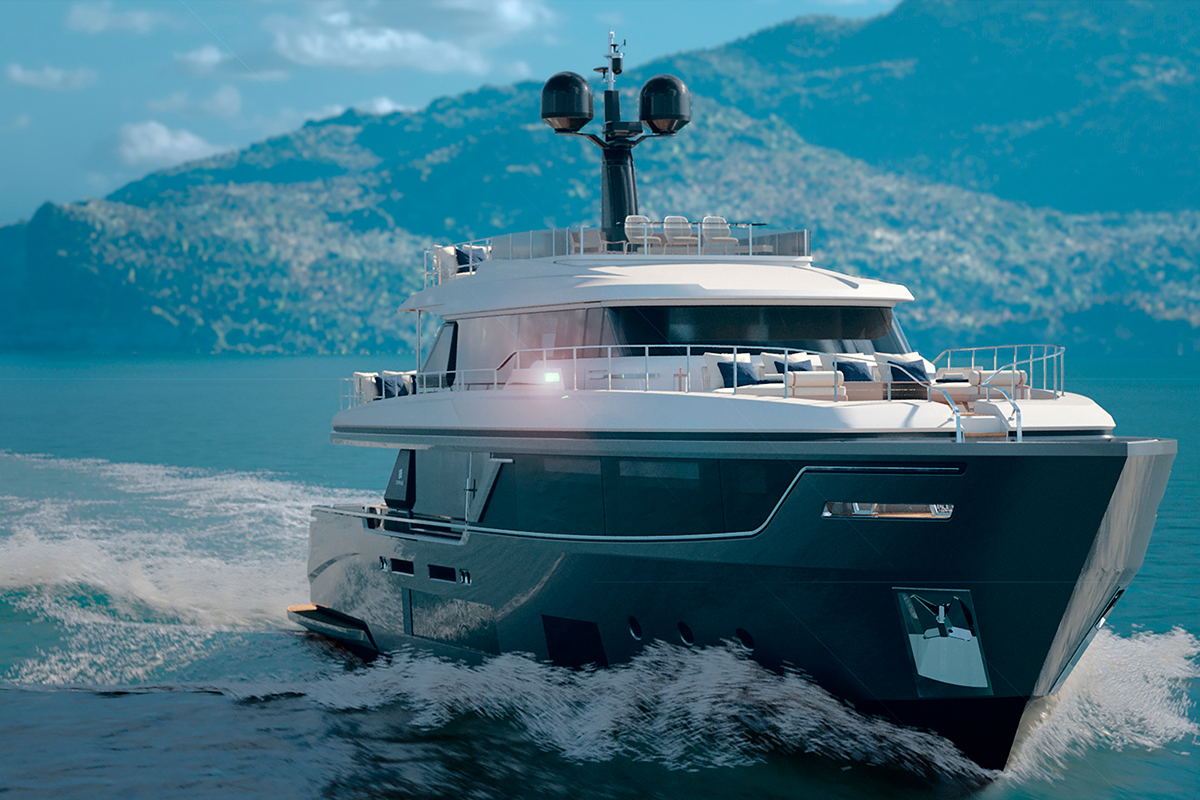 Though much of the world are currently restricted to their homes during the COVID health crisis, new Custom Line will have yachting aficionados busting to get back out on the water.

As Italy fights the pandemic, production on the new line has been halted putting the manufacturers 45 days behind schedule. However, Ferretti Group Chief Commercial Officer Stefano de Vivo is confident the highly anticipated Navetta 30 will be completed by October 2020.

“The project is under full swing,” Stefano explained at an exclusive online event. “The original schedule was for the boat to be launched and brought to the Cannes Yachting Festival – unfortunately, COVID slowed this down.”

One of the most exciting aspects of the new Navetta 30, which is the smallest of the Custom Line range, is the history-defining decision to partner with two new designers on the project – a first in the company’s 24 years.

“The Navetta line was completely re-engineered and redesigned at the beginning of 2015 and Navetta 33, 37 and 42 were born,” Stefano explained. “For the next step, the Navetta 30 and 48 projects, we decided to go a step further.”

“We wanted someone new, someone young, someone that could bring ideas but that could respect also what had been done up to that moment of DNA of Custom Line,” Stefano says.
“They have a taste of what the other products are in the line, but there’s also some new touches – I think you can see the evolution.”

Perfect for those who enjoy traditional spaces while embracing elegance, beauty and exclusive personalisation, the Navetta 30 boasts that and more. At 28.43m long and a beam of 7.3m, it is unprecedented to have three decks on a yacht of this length.

“It was an amazing experience working with the Ferretti Group, being able to enlarge our visions on nautical design,” Patricia says. “It’s a very special project for us because we have been involved from the beginning – we started very quickly working on the bigger ship of the collection.”

“It has to be beautiful because we’re Italian and we make beautiful things.” – Stefano de Vivo

Specially designed built-in furniture provides comfort yet maintains the marine ethos on board and furnishing solutions are available in two aesthetics – textured for a modern feel or timber for those who enjoy a classically timeless design.

“We went through detailing prototypes of every single element of the project – every single finish and fixture has been custom designed for the project,” Patricia says. “There’s been a very, very high level of quality and engineering and integration of different technologies. 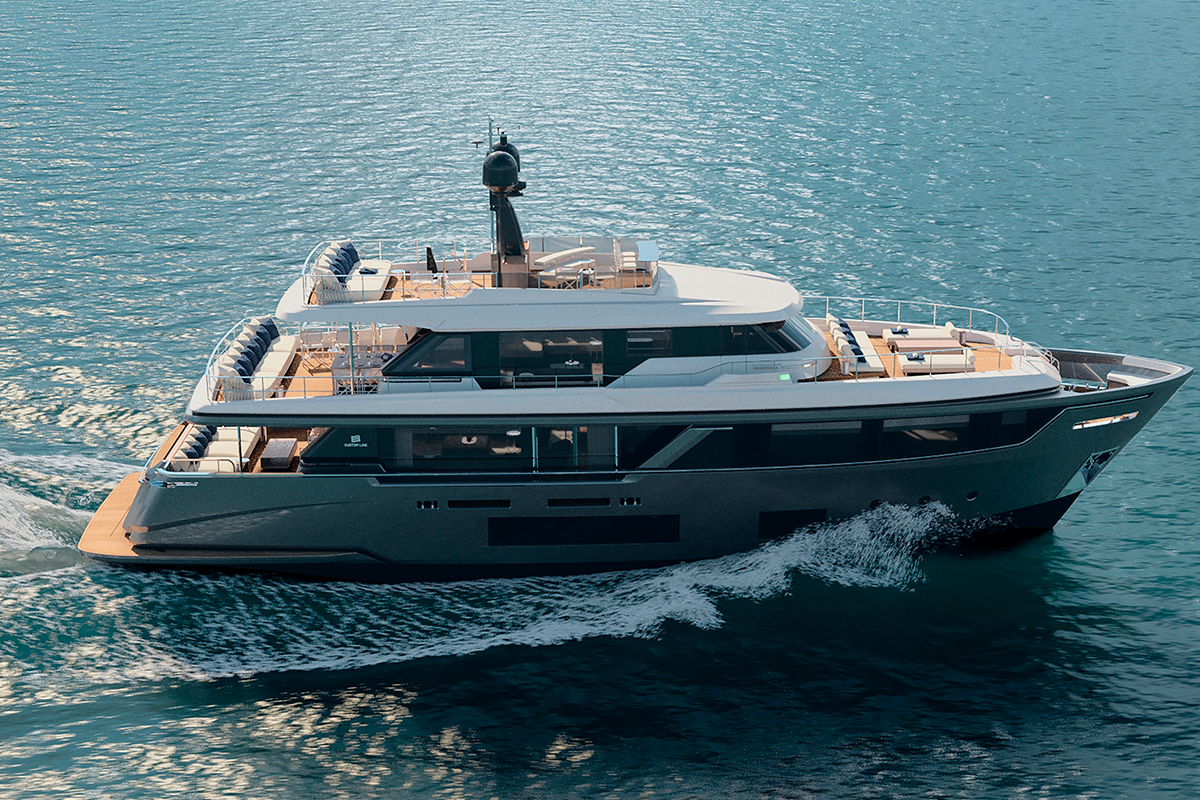 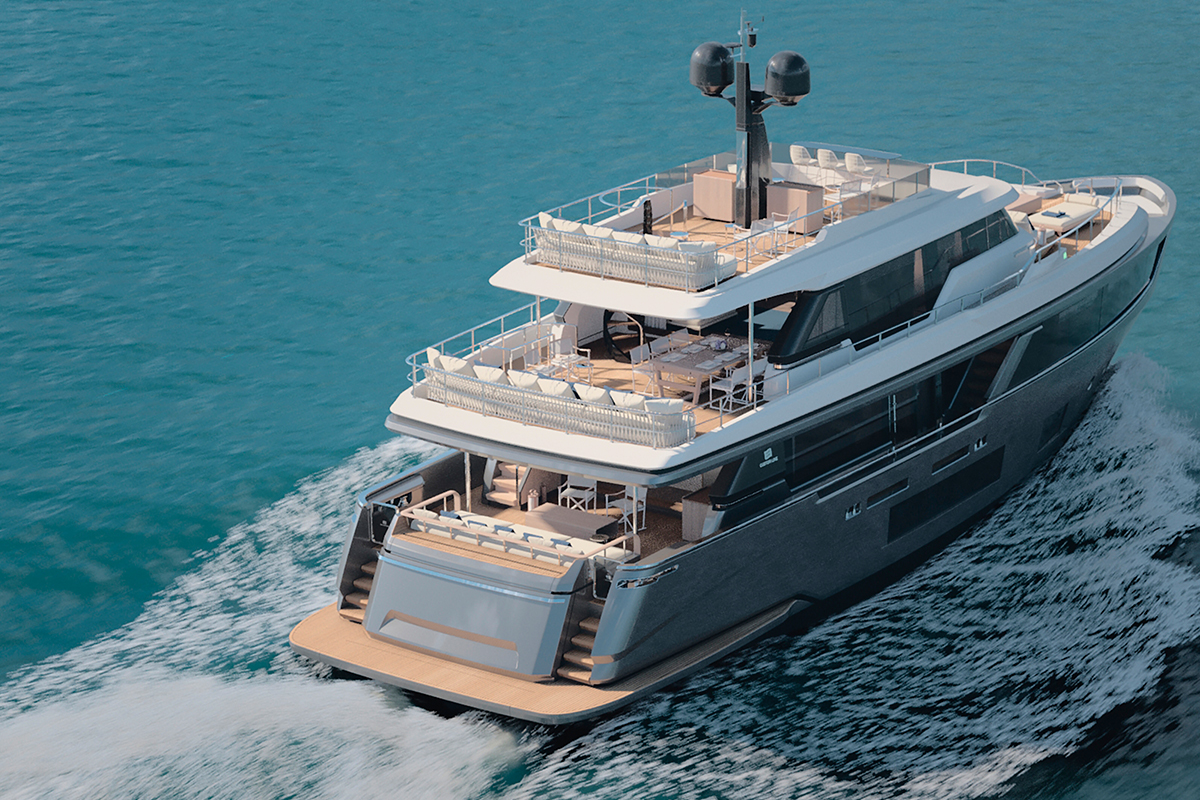 “The blue colour has been maintained – that was very important for us … and for the rest you see wood that is actually extensively used for this project bringing a traditional and classic touch to the design.”

One of the highlights is guaranteed to be the breathtaking outdoor spiral staircase with integrated lighting leading from the upper deck salon to the upper deck solarium.

“The size of the space that is delivered to the life on board is huge,” the Milan-based designer explains. “There is extreme connectivity visually but also the full open space of every single deck gives flexibility to customisation.

“And of course, the area on the back is for sunbathing with a bar.”

The Navetta 30 is being manufactured at the new Ancona Super Yacht Yard in Italy worth more than €30 million. Impressively, will become one of more than 250 yachts produced by Custom Line in the past 24 years.

Adding to the fine craftsmanship and intrinsic detail of the yacht is perhaps the fact it was designed by hand.

“Although I’ve worked with computers all my life in the studio, it all starts from a hand-drawn sketch and is then put into the computer by making it 3D all the way to the final design and rendering, which gets put onto a real wake of a yacht,” Filippo explained..

From the commencement of the exterior design, tweaks and changes have been made to ensure the sleekest build.

“Renderings that were made during the evolution of the project show how it has changed a lot in the bow area to add volume – that’s where a lot of work was made to make this yacht as large as a ship but staying under 24 feet,” Filippo says. 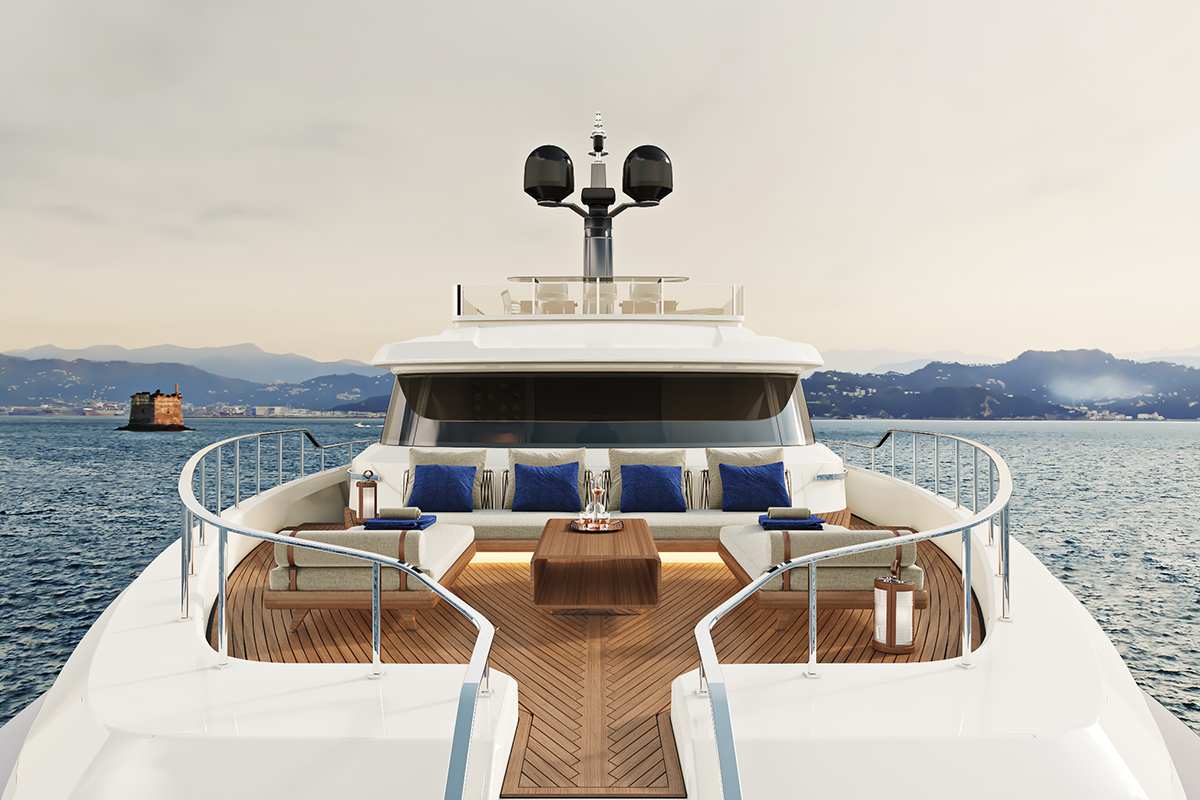 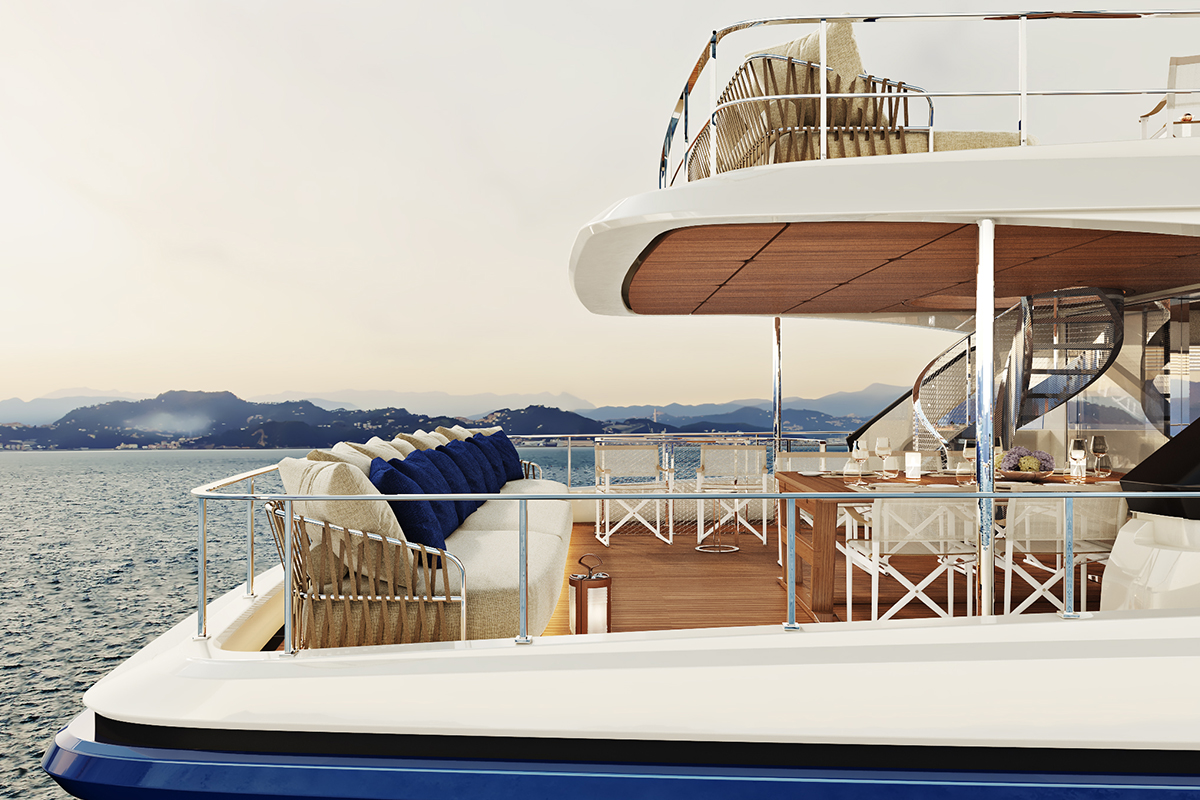 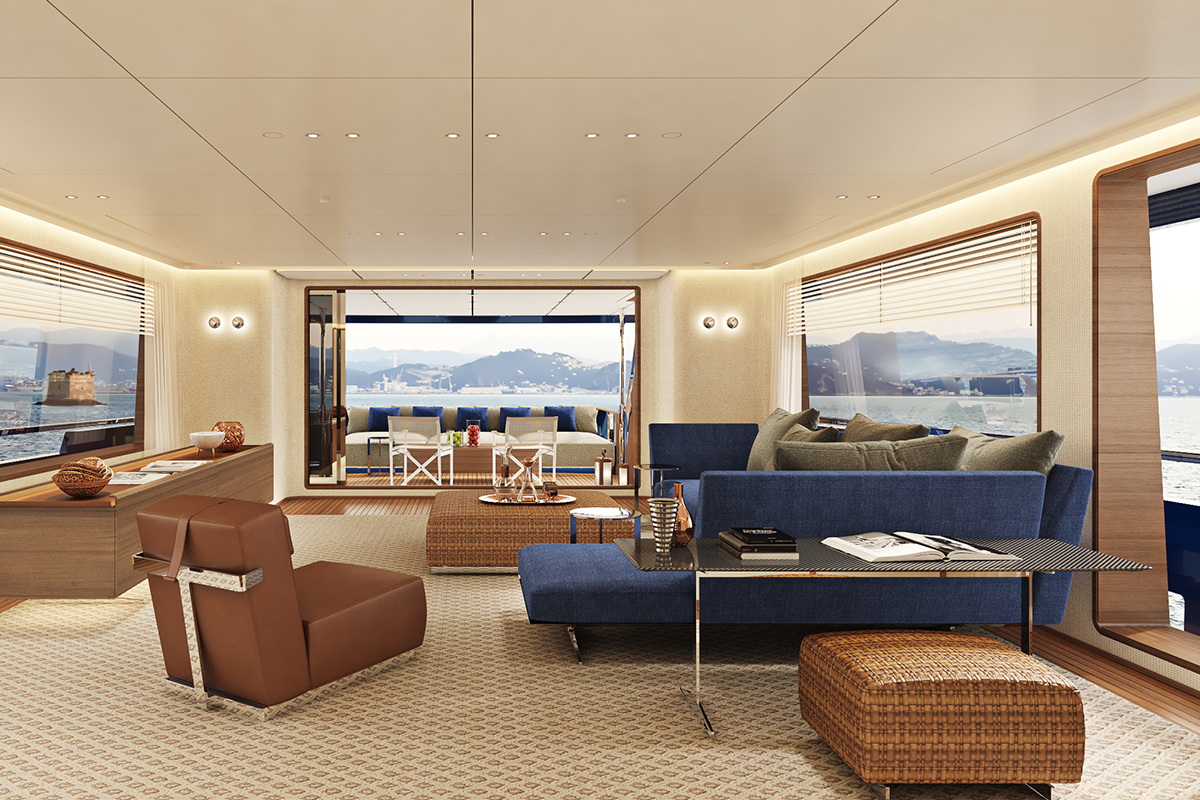 For the first time, the drop from the superstructure on the upper deck has been shortened near the glazed window of the owner’s cabin adding to its racier, streamlined shape.

In the early stages, the Custom Line yacht resembled the structural design of Navetta 28 while also showing similarities to Navetta 26, however, it was transformed into a vessel unlike any other.

“As the project went on, extra comfort and quality with enrichment was required, which mainly meant lowering sound – this has made the Navetta 30 much closer to large yachts,” Filippo explained. “I was challenged with designing a yacht that grew in height.

“The thickness between the deck and upper has grown to mainly ensure better sound dampening and vibration dampening, but it’s been a challenge for the design to minimise the effect of looking bulky.”

Navetta 30 has been described by the designers as being “a ghost ship” where fewer emissions will be made, all the while being quieter and with low fuel consumption, adding to its overall sportier, racier aesthetic – not to mention its ability to travel long distances with prime performance, putting it at the top of its class.

The “beauty line” project meets all of the requests that have been made throughout the lengthy process and promises to be a breathtaking masterpiece once completed later this year, ready to reawaken joy in a post-pandemic world.

“It has to be beautiful because we’re Italian and we make beautiful things,” Stefano says.