Bigger, better and more luxe than ever before, these superyachts are set to leave you speechless with high-tech features and extravagant price tags. 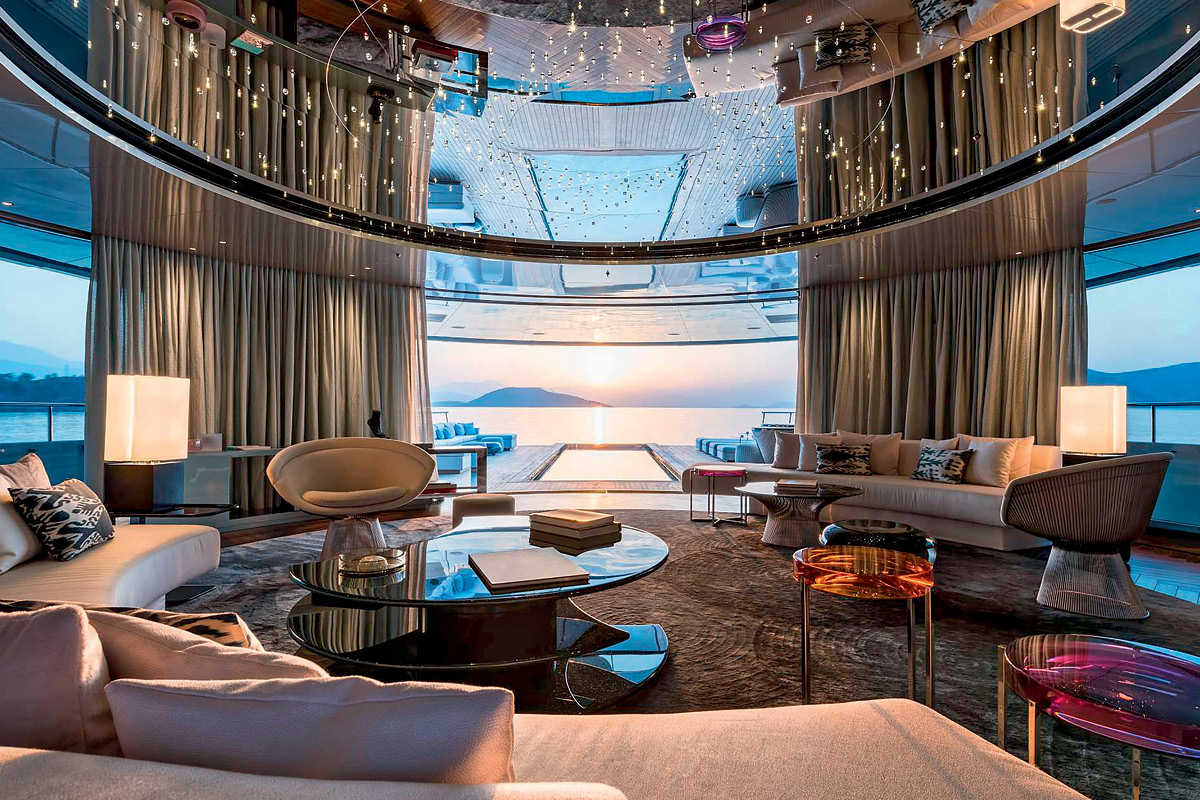 Just as a private jet or the latest luxury sports car is a sign of wealth and abundance, so is a superyacht. Many billionaires invest millions of dollars on the biggest and best superyachts.

With interiors plush enough to match any five-star hotel’s, many of today’s superyachts come with their own helipads, swimming pools, beach clubs, cinemas and dance floors.

Year upon year, the yachts become increasingly extravagant with some coming in at a hefty price tag of up to US$500 million, but to the wealthy it’s a must-have accessory.

“It’s the ultimate luxury and the ultimate freedom, giving owners the ability to instantly pull up anchor and sail or motor off to anywhere in the world that catches their fancy,” says Ginger Hornaday, a broker with Engel & Volkers.

And for the yacht owner, it’s a great long-term investment. “As the pursuit of luxury moves from goods and services to unique experiences, the ultra-wealthy are demanding that the returns on their most precious possession – time – are maximised in every way possible,” according to the 2016 State of Wealth, Luxury & Yachting Report from Wealth-X and Camper & Nicholsons.

Further, the market is on an upturn, as reported in The Wealth Report 2018 by Knight Frank: “The superyacht market is also recording growth, driven by the US, according to Merijn de Waard, Director of SuperYacht iQ.”

Owned by billionaire businessman Lukas Lundin, Savannah is an 83.5-metre yacht built out of steel and worth around US$100 million. She may be one of the smaller crafts, but with her impressive elegance, she exudes beauty and finesse.

Savannah has won six awards overall, mainly for her design and architecture by the Showboats Design Awards in 2016. 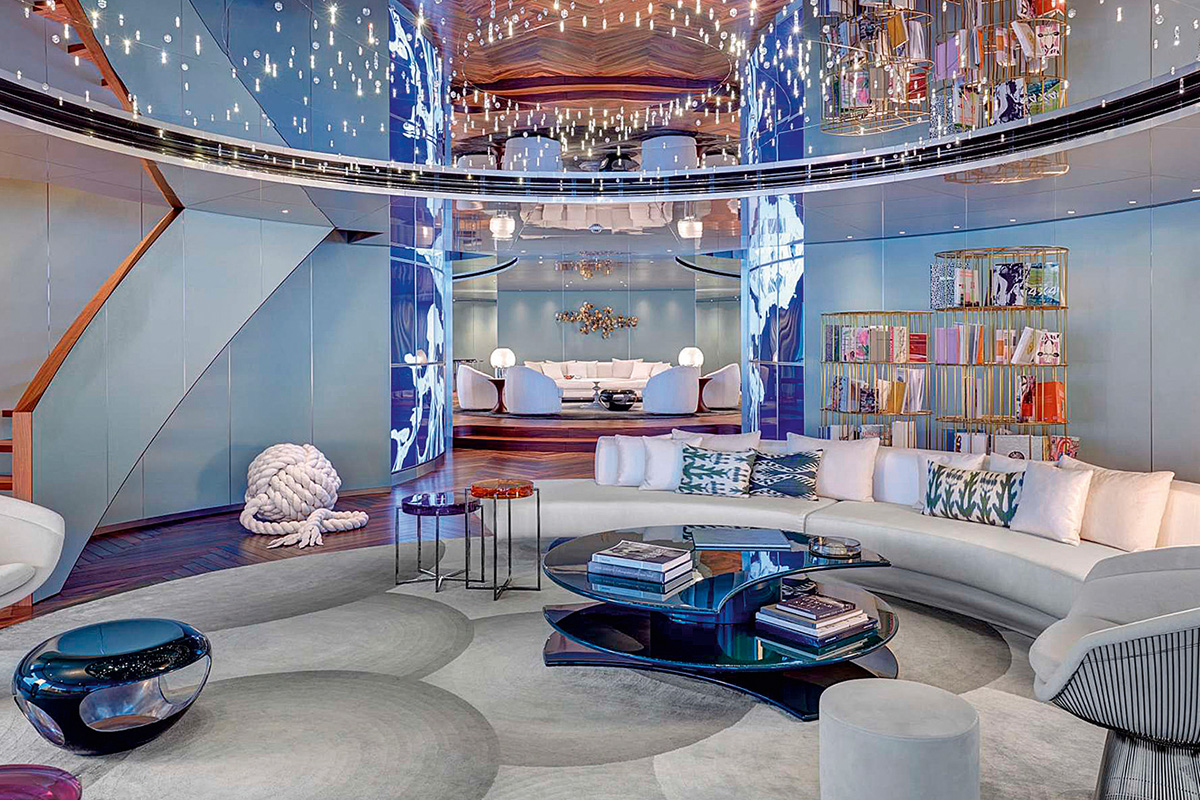 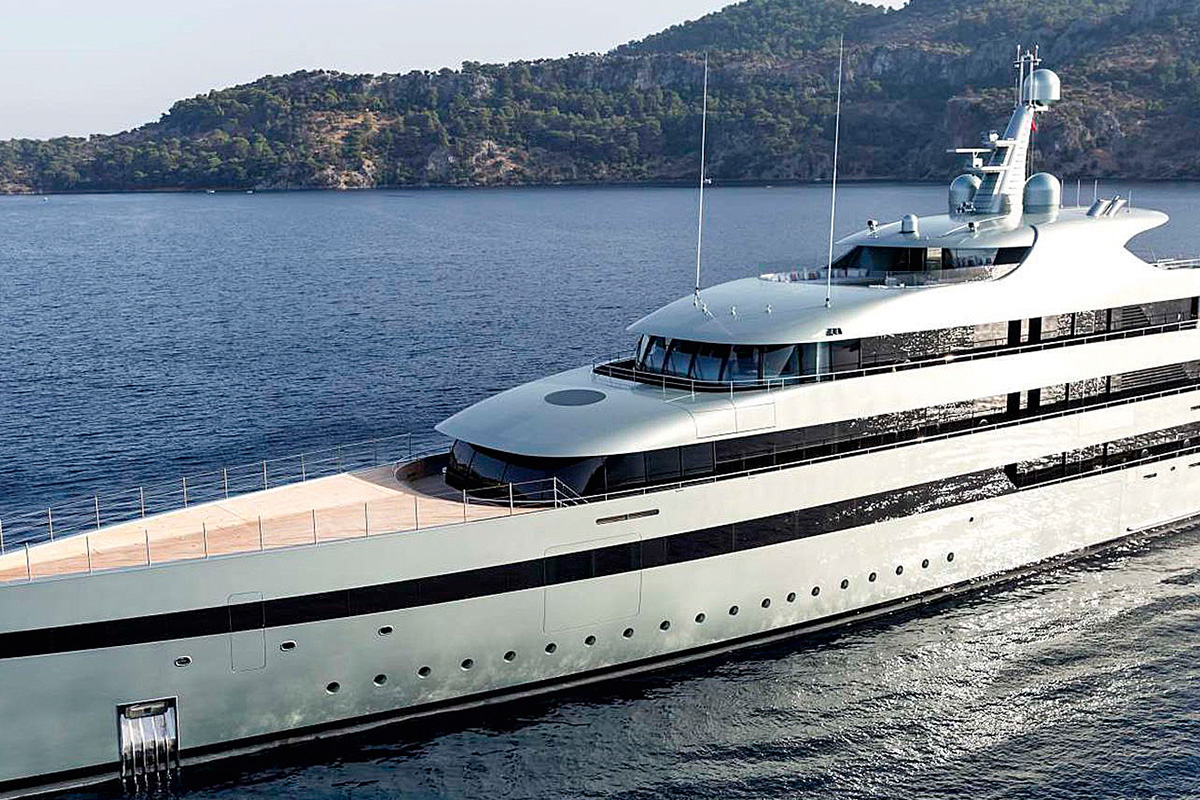 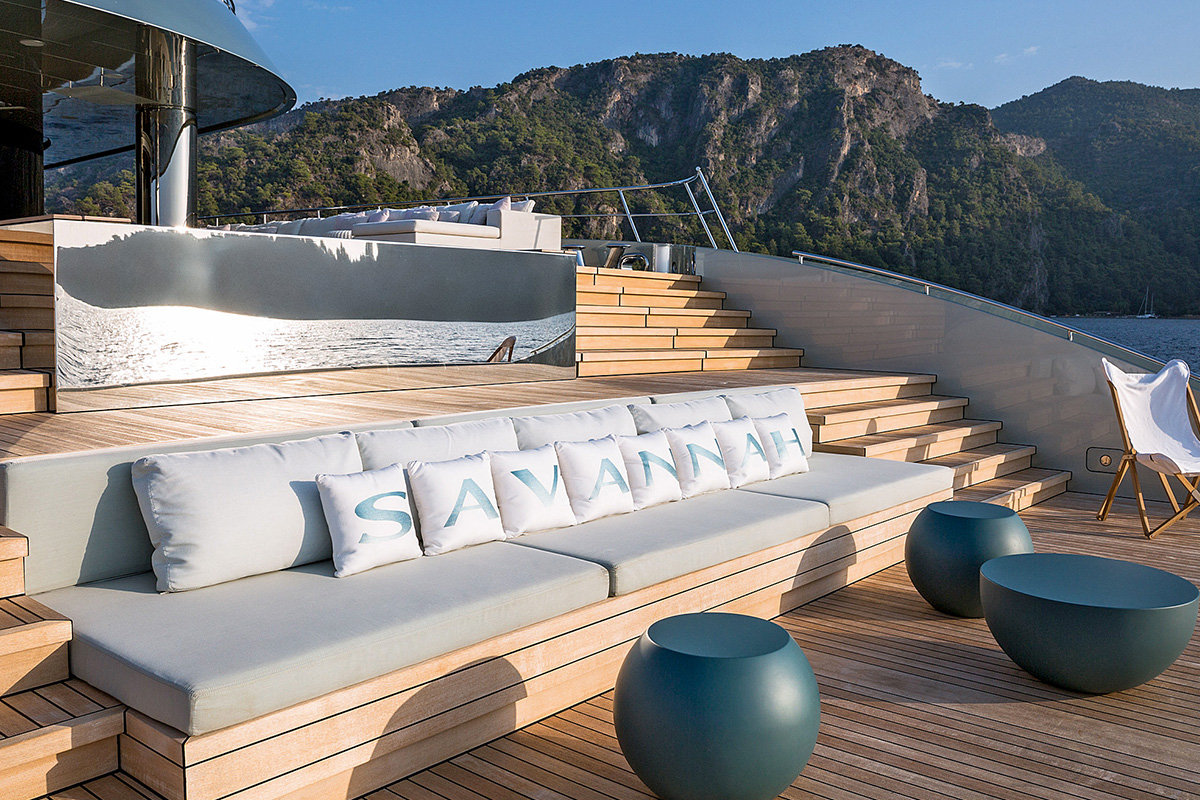 The yacht’s interior was designed by the renowned creatives at CG Design and her exterior styling is by Feadship & CG Design.
“You’ve never seen spaces of this size with so many large windows,” says designer Cristina Gherardi, referencing the main salon’s continuity with the deck. “Every single room has a view.

The fact also, which is very different from most boats, is that there is only one hand that designed the boat.

“There is a simplicity in the profile. When we came on board the project we were looking at all of the projects that were going on and at one point we said, ‘Stop. Let’s not look at anything [else] and do something different’,” she adds.

The standout feature, however, is the amazing underwater viewing lounge with its vast windows, and this elegant boat boasts timeless styling and sleek furnishings throughout.

Savannah also features a swimming pool, gym and garage, and can accommodate 12 guests and a crew of up to 22. She is the world’s first hybrid superyacht, making her an extremely fuel-efficient vessel.

Not content with owning sports teams in the EPL and the National Football League, philanthropist billionaire Shahid Khan also owns 95-metre Kismet, built of steel and worth around US$200million.

In 2015, Kismet snagged a prestigious World Superyacht Award. Her exterior is super sporty, like her owner, and with her sharp design, she is streamlined to perfection. 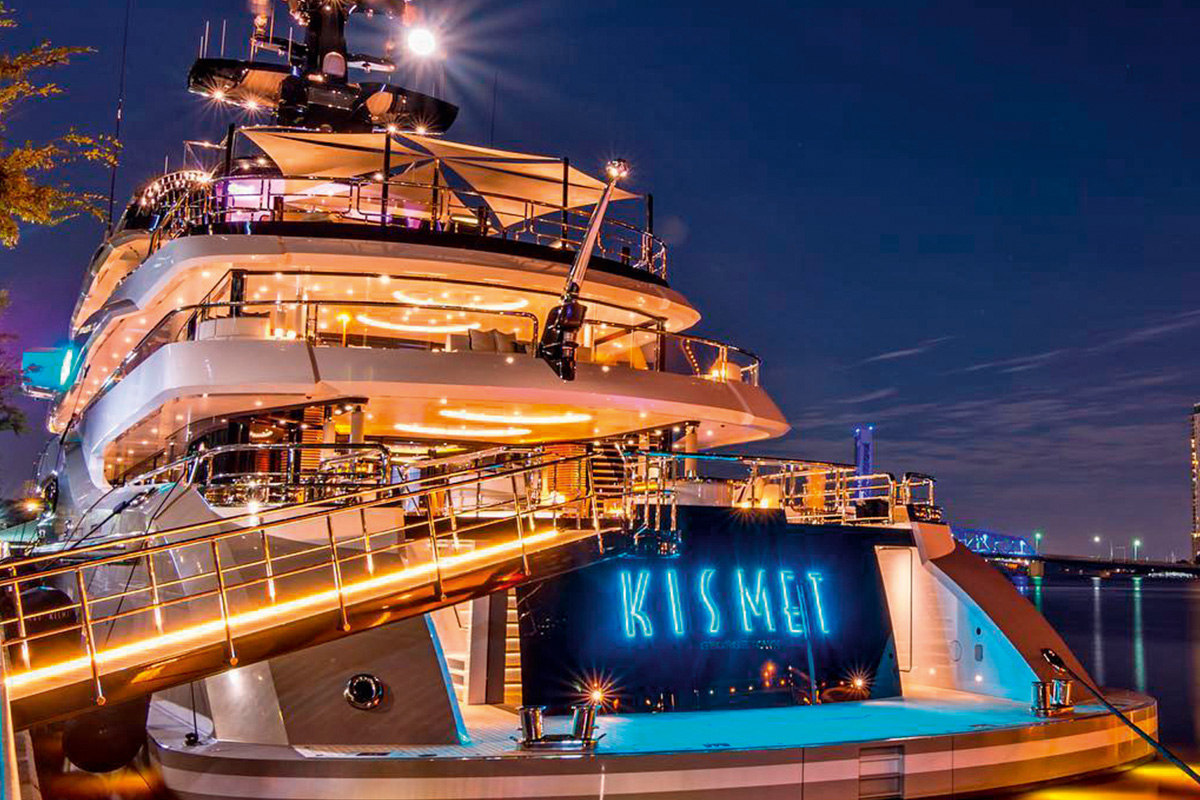 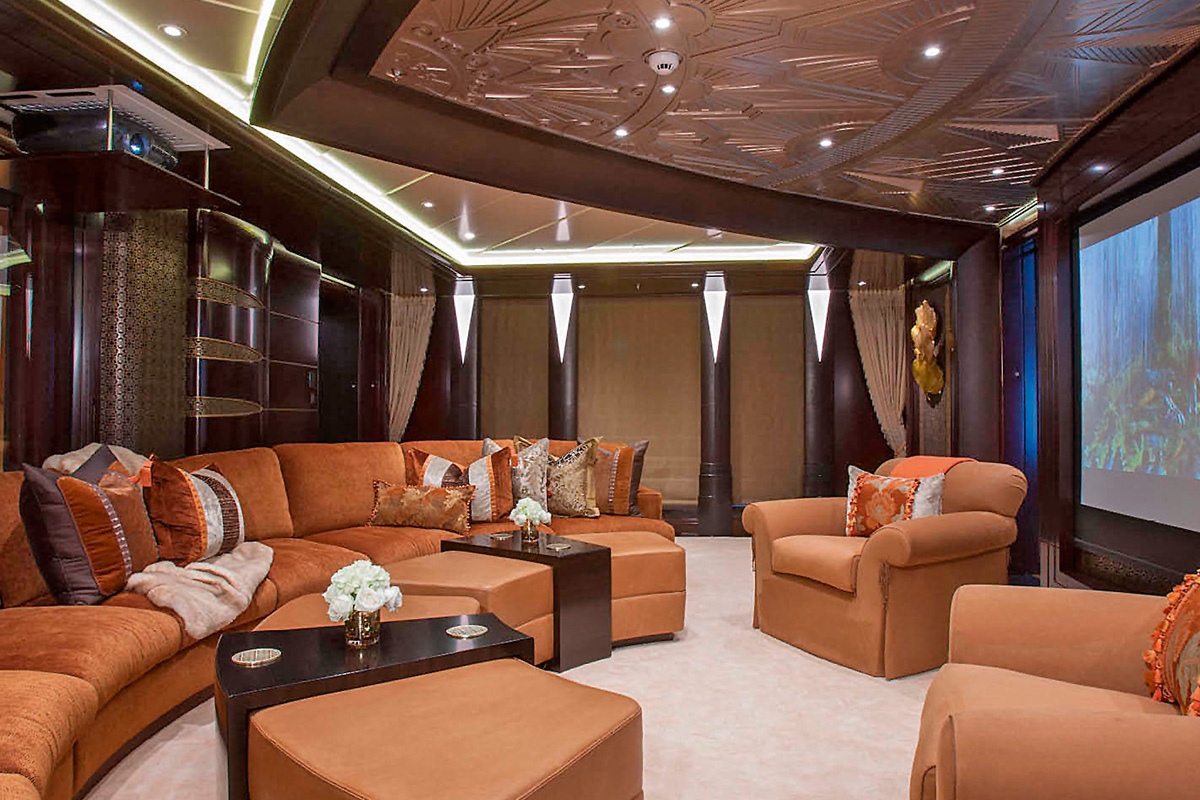 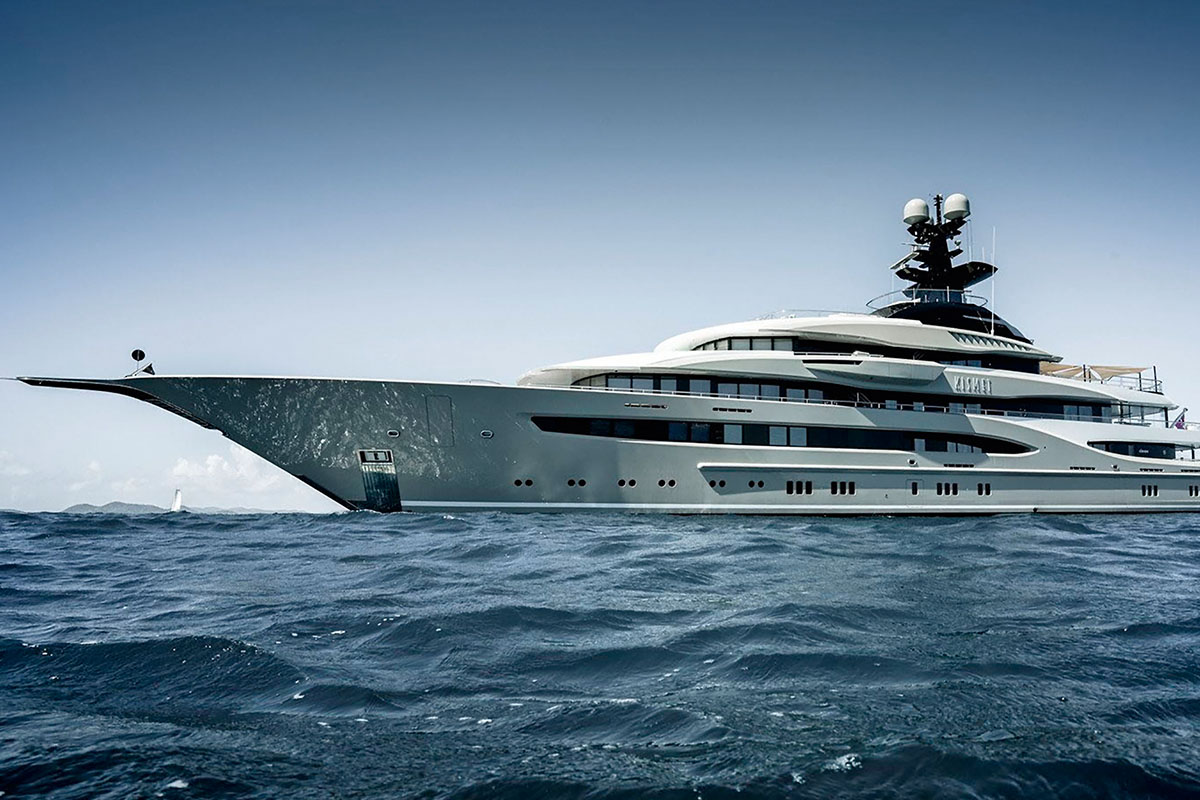 Kismet’s interiors are equally impressive as she boasts a stunning Art Deco style with an elegant Persian twist. The pièce de résistance is the two-deck video wall made from 42 individual 140-centimetre monitors.

This amazing creation can show moving artworks, news, films and games. Other standouts include a stunning open fireplace, an oval, mosaic swimming pool with integrated jacuzzi on the sundeck, a large spa and an elevator.

Unlike other crafts of the same size, Kismet features an observation deck at the top. Accessed through a staircase on the upper foredeck, it’s the perfect place to watch a starry night over the ocean. Kismet accommodates 12 guests and 28 crew.

Not to be confused with the inaugural Dilbar (now Ona), luxurious Dilbar was custom-built in 2015 by Lürssen shipyard and is one of the longest superyachts in the world (with an impressive 156 metres nose to stern) and is the largest, weighing in at just shy of 16,000 tons. 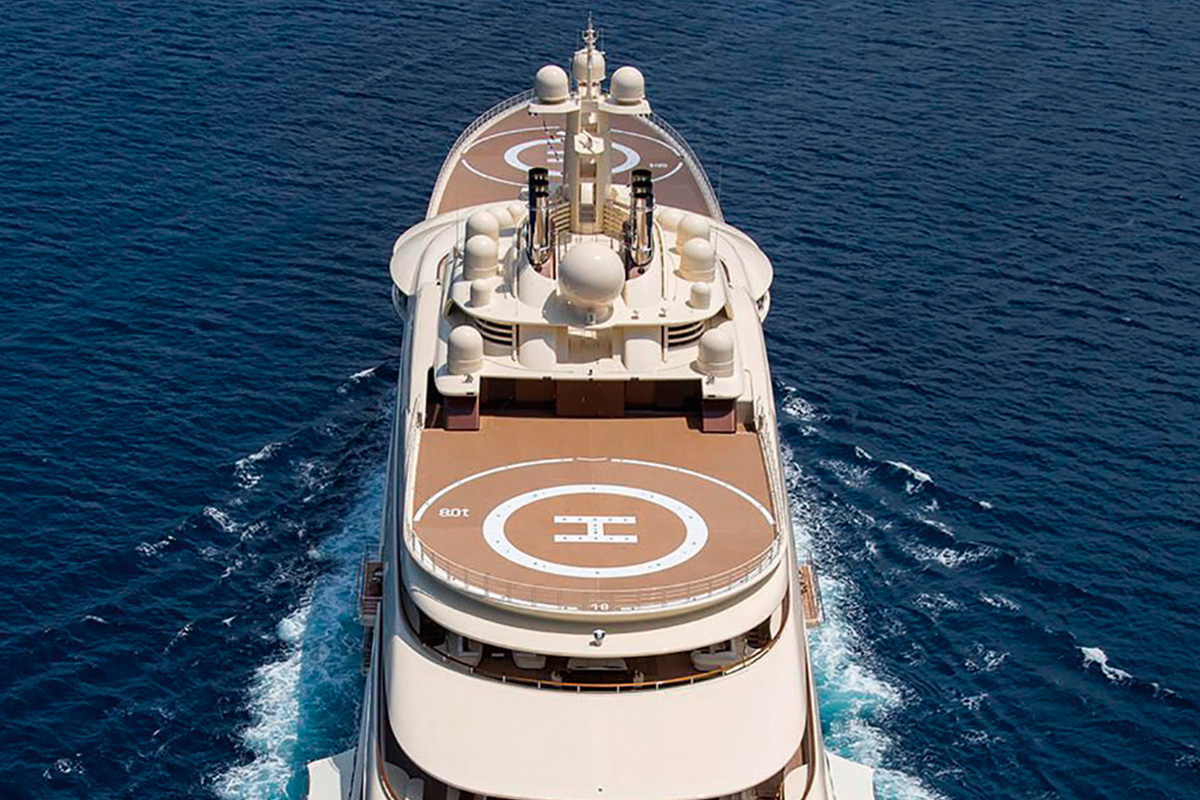 Named after the mother of the owner, Russian businessman and Arsenal FC shareholder Alisher Usmanov, Dilbar was frequently used by the billionaire to visit his private islands. Valued in the region of US$256 million, this vast vessel took out the World Superyacht Award for Motor Yacht of the Year in 2017.

Standout features include the large guest and owner living spaces, which is spread over 3,308 square metres – equivalent to 104 apartments at an average size of 46 square metres. It also boasts the largest ever superyacht pool in existence (at 25 metres) and a vast dining room and salon with piano to further impress the guests.

Built over 52 months, Dilbar’s exterior was designed by Monaco-based Espen Oeino, while her interior was styled by London-based Winch Design.

Two helipads make it easy for your 40 guests (and a crew of 80) to come and go as they please.

This 73-metre luxury vessel was built in Italy (as Grace E) by Perini Navi and delivered in 2014 to the highest yachting standards. With an estimated worth of around US$91 million, Nautilus was designed by Vitruvius, with the interiors created by Remi Tessier, and in 2015 she won World Superyacht Awards’ Motor Yacht of the Year.

One of her notable features is the diesel electric Azipod propulsion, which gives her less edge in terms of space, but makes her more impressive on the technical front. 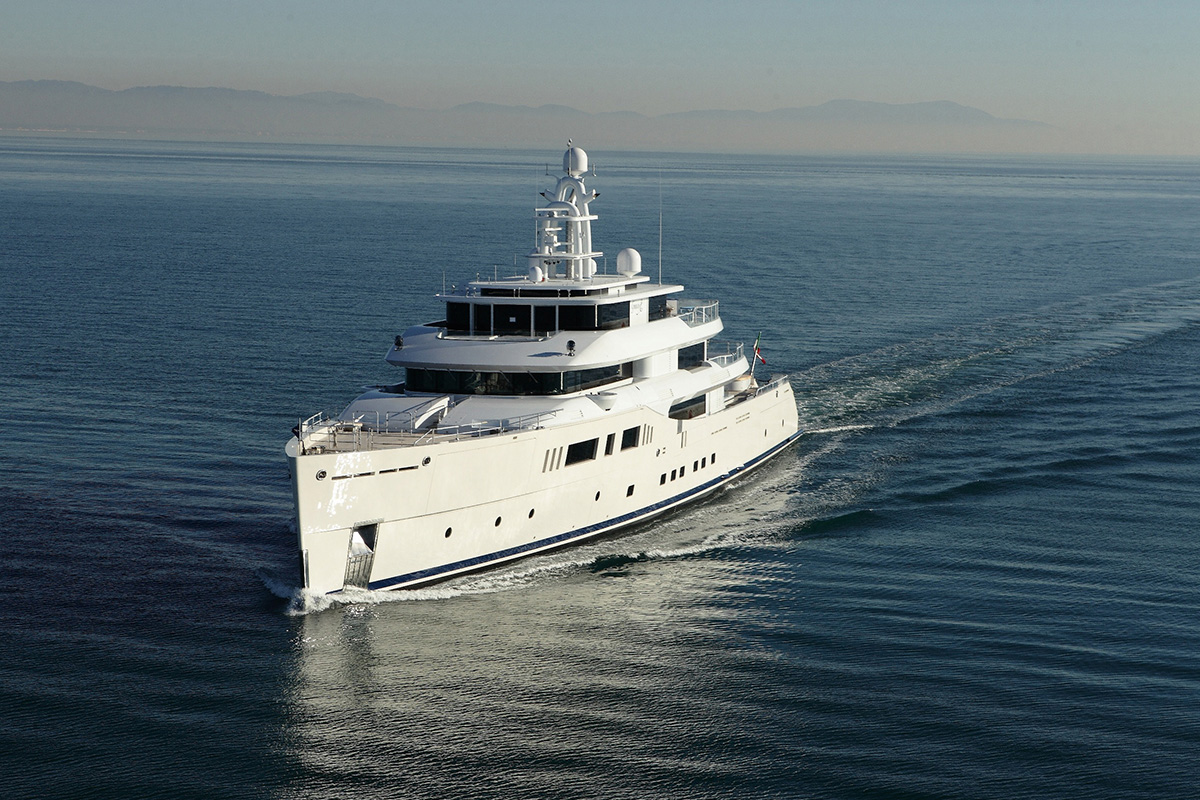 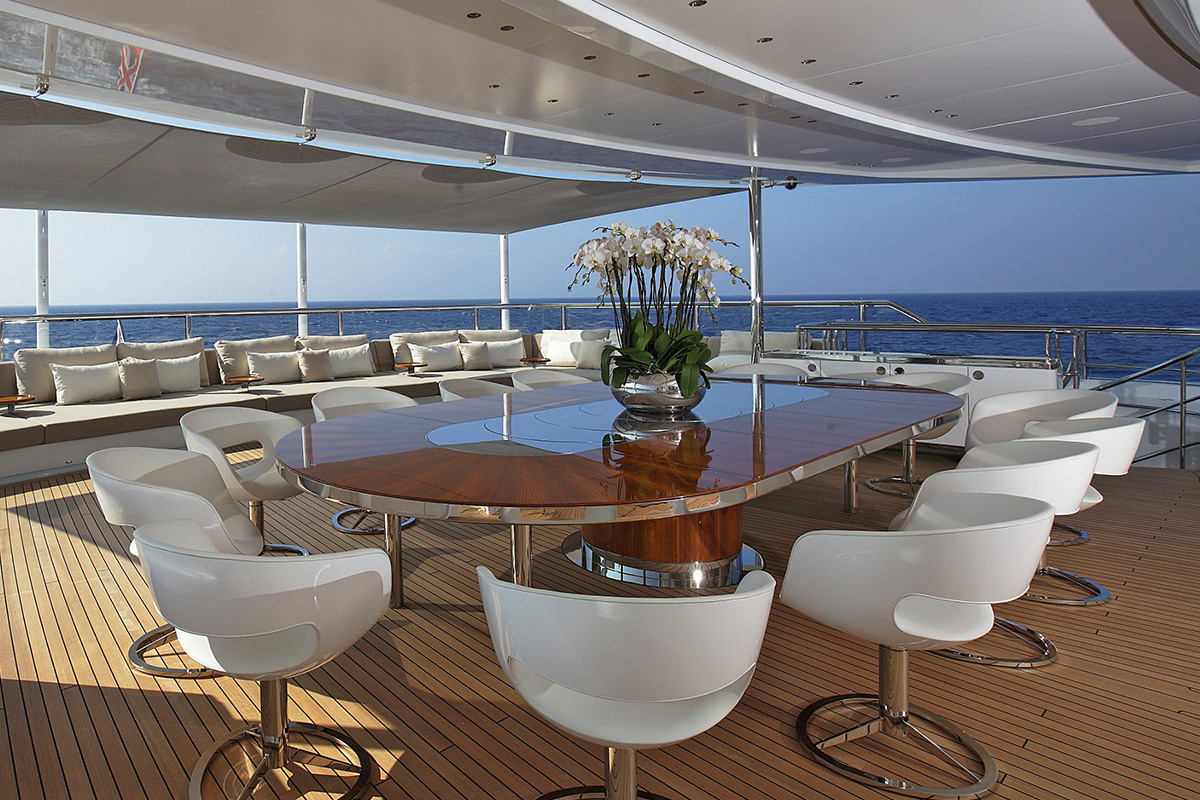 “The wellness deck was an idea that came from the owner’s previous yacht where we had retrofitted a gym on the upper deck,” says Captain Eddie Cooney. “This was a starting point of the interior design, as the owner wanted it on the top deck to take advantage of the big windows, rather than in a poky space in the lazarette.”

While somewhat minimalist, the interiors include luxurious materials such as Makassar ebony, brushed sycamore, parchment and polished stainless steel.

Smooth and (almost) whisper-quiet, Nautilus can accommodate up to 12 people plus 20 crew members to tend to their needs.

Owned by Russian billionaire Roman Abramovich, Eclipse is the world’s second largest and one of the most expensive superyachts.

With an estimated cost of US$590 million, the 162.5-metre-long beauty includes many extravagant features including a gym, dance floor, underwater lights, beach club, beauty salon and jacuzzi. 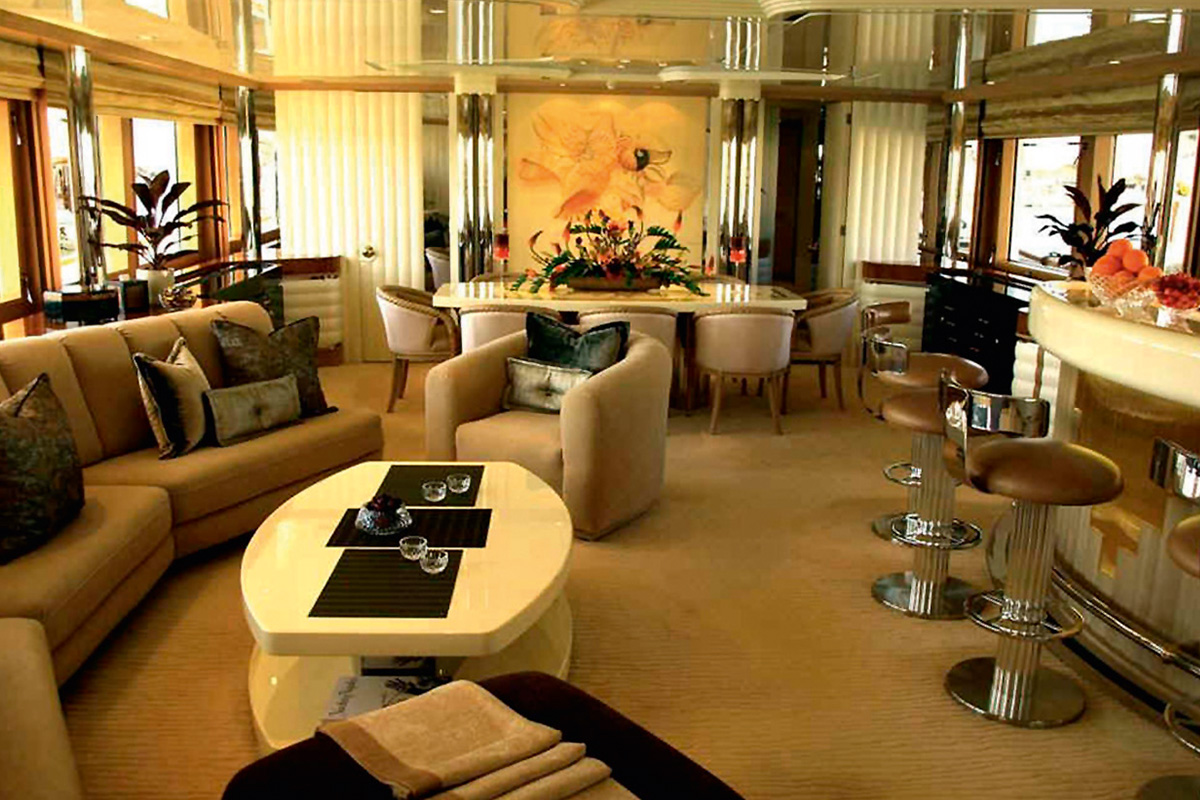 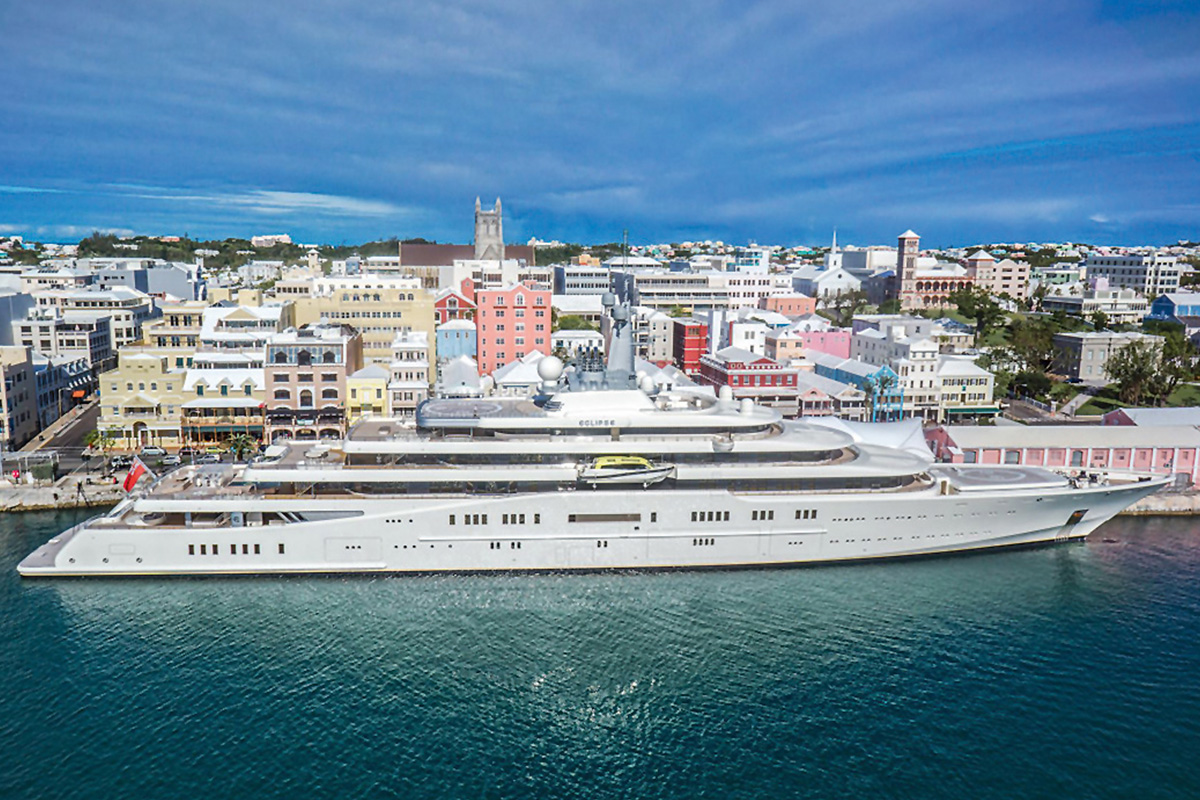 But the real standout features are the two helipads and a 16-metre swimming pool that converts into a dance floor. But that’s not all, the tech features are a nod to a James Bond movie – with motion sensors and bulletproof glass, plus each cabin comes with its own 1.8-metre home cinema screen.

This magnificent vessel is also ideal for celebrities with its anti-paparazzi laser system. Eclipse can comfortably house 30 guests and a 92-member crew. All this, and the master suite alone spreads over 465 square metres.

This 103-metre US$150 million superyacht is owned by British-born, Bahamas-based businessman and art collector Joe Lewis, so as you’d expect Aviva’s interiors have that extra touch of class. 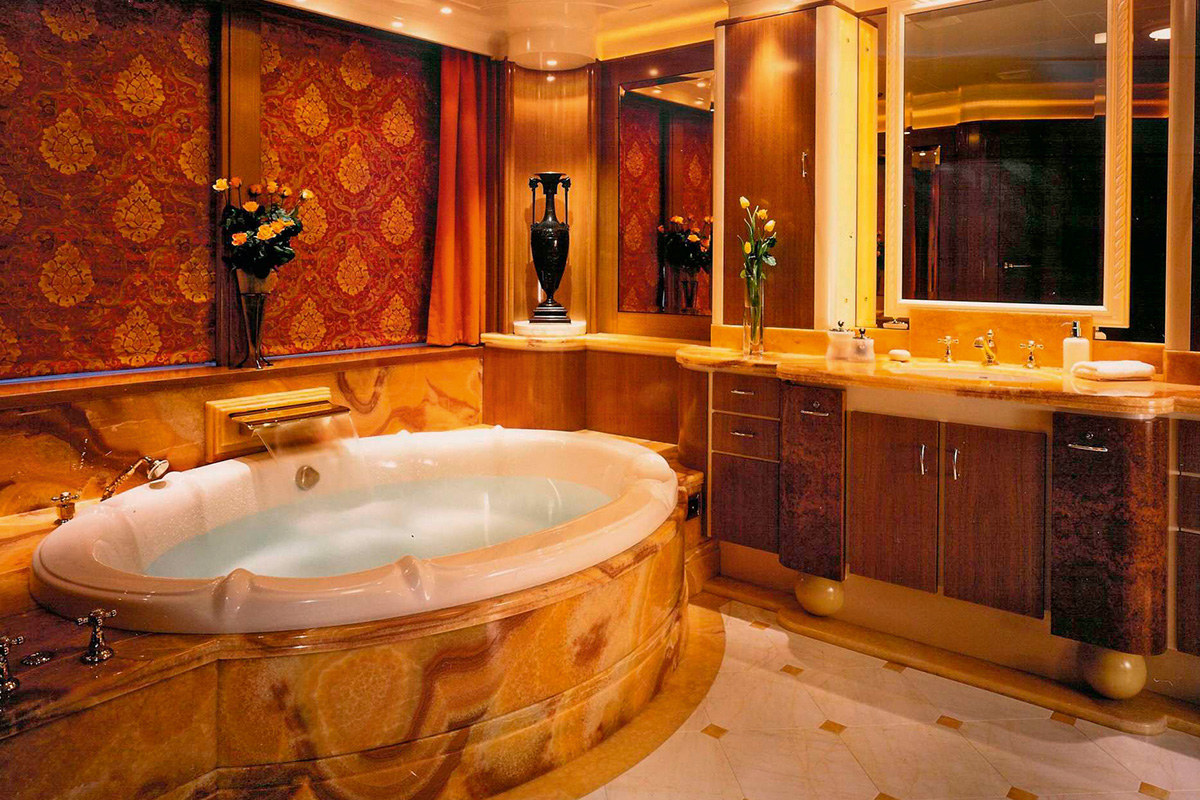 Built over the course of three years by Abeking & Rasmussen in Germany at their Lemwerder shipyard, Aviva was designed by Reymond Langton Design with sleek exterior styling by Toby Silverton.

Lewis uses Aviva as his home away from home, which makes perfect sense as she boasts an on-deck jacuzzi, elevator, swimming platform and gym. And if that’s not enough, there’s even a 20-metre indoor paddle tennis court.

Aviva also has her own speedboat for jaunts to the mainland. She comfortably sleeps 16, with six luxurious cabins and can host 35 crew onboard.

One of the world’s most expensive boats, Serene was sold to the Crown of Saudi Arabia, Prince Mohammad bin Salman,
for US$500 million by the owner of Stolichnaya Vodka, Russian billionaire Yuri Shefler.

At 133 metres in length, Serene is also one of the largest yachts in the world. Built by Fincantieri in 2011, the superyacht’s magnificent profile was designed by Espen Oeino, while her vast interior spaces were styled by Reymond Langton Design. 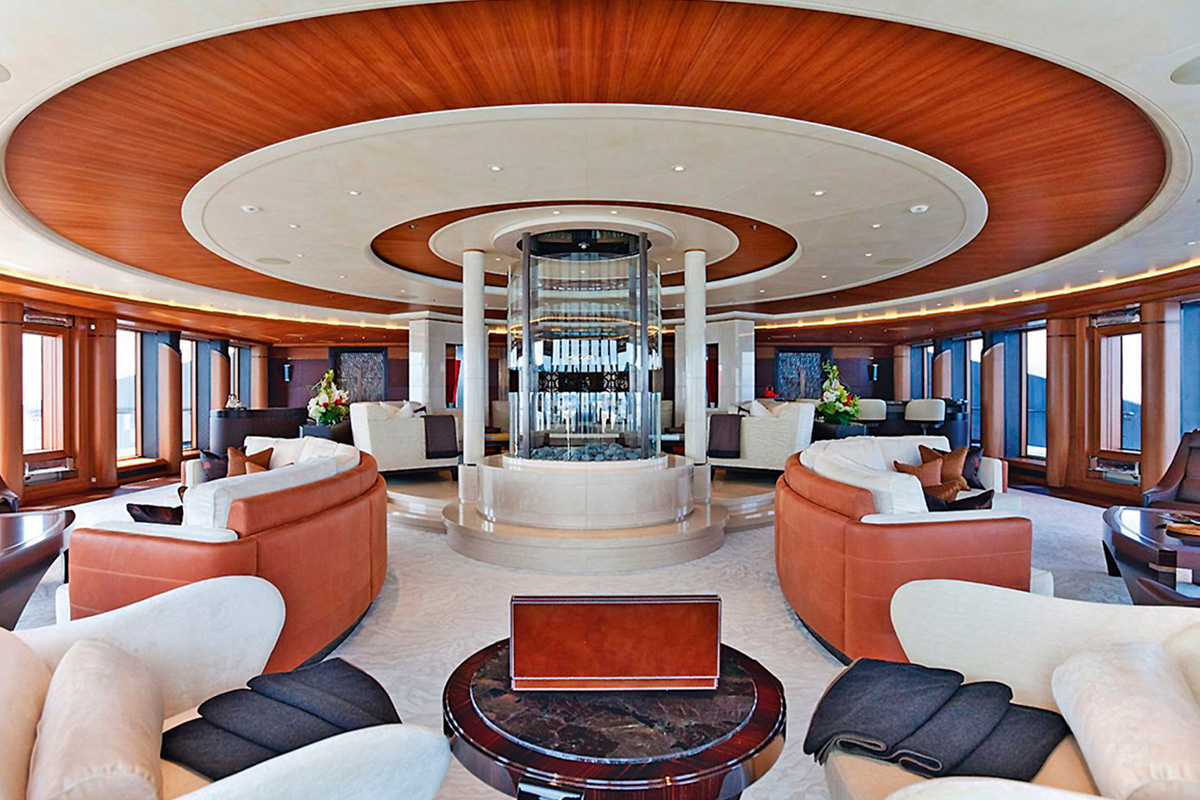 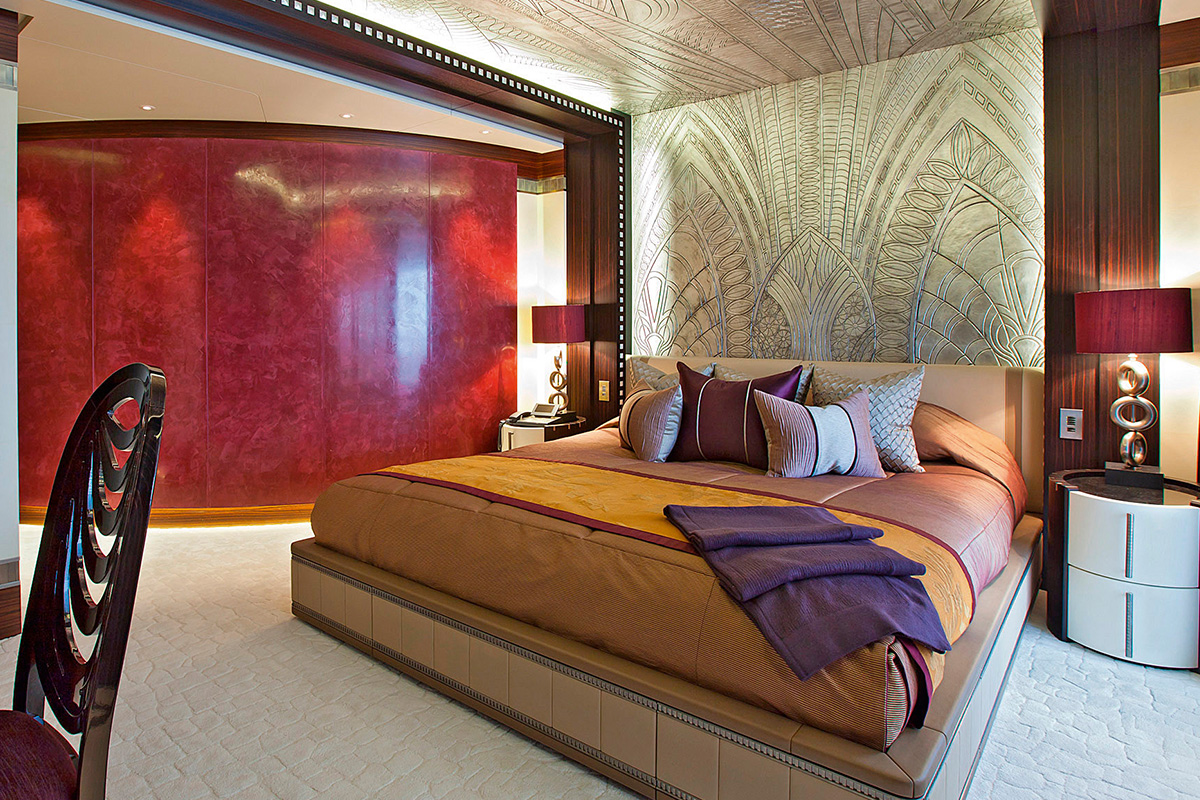 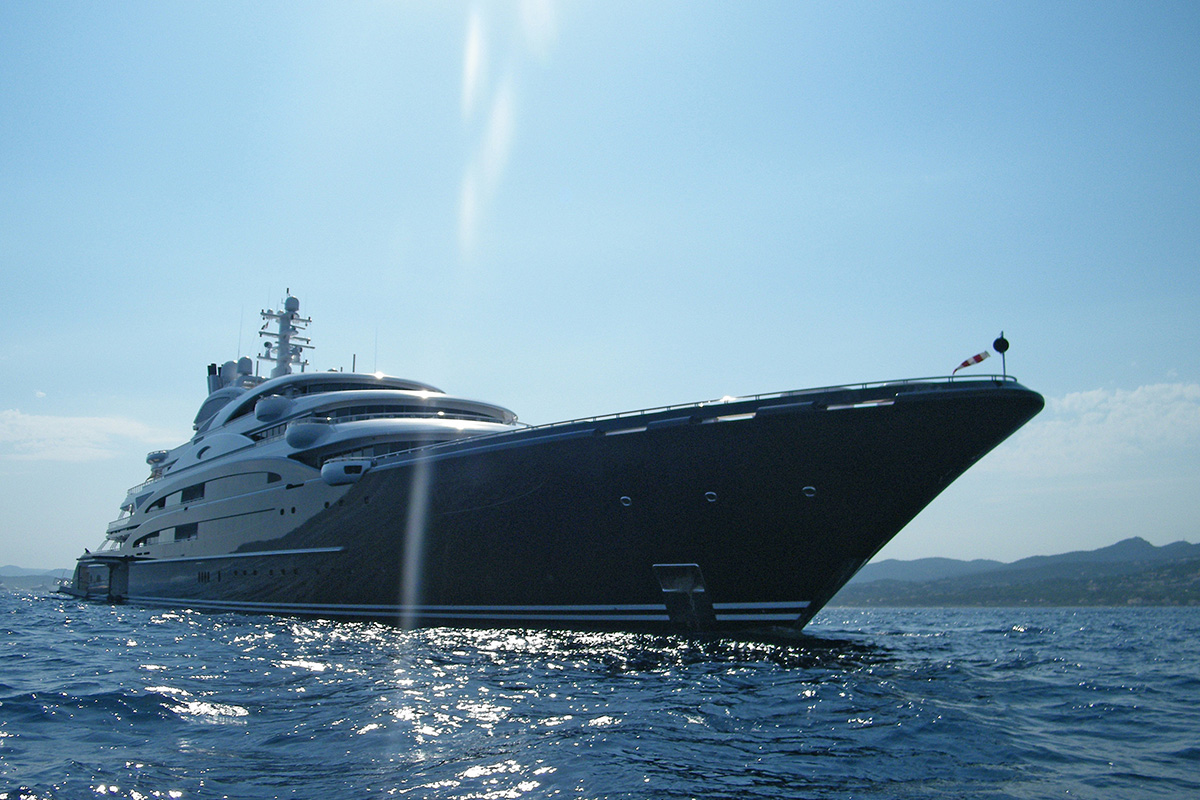 Serene’s features include not one but two helipads, a health club complete with hair salon and fully equipped spa, a children’s playground with an indoor climbing wall, three swimming pools, and hot and cold jacuzzis – and there’s even space for a large submarine, should the need arise.

The perfect superyacht for entertaining business acquaintances or close friends, other features include a dance floor, indoor cinema, a wood-fired pizza oven and a teppanyaki grill. Below deck, there’s also the Nemo room, an underwater viewing area that allows guests to enjoy all the marine life swimming beneath the vessel.

There’s also a grand spiral staircase inside that reaches six of the seven decks. Serene can accommodate up to 24 guests across 15 staterooms, which includes a master suite, one VIP stateroom, seven double cabins and three twin cabins.

At 110 metres, Jubilee is the largest yacht to be built by Oceanco in the Netherlands. Costing in the region of US$310 million, this ultra-luxurious vessel was made for the late Emir of Qatar and took five years to finish. 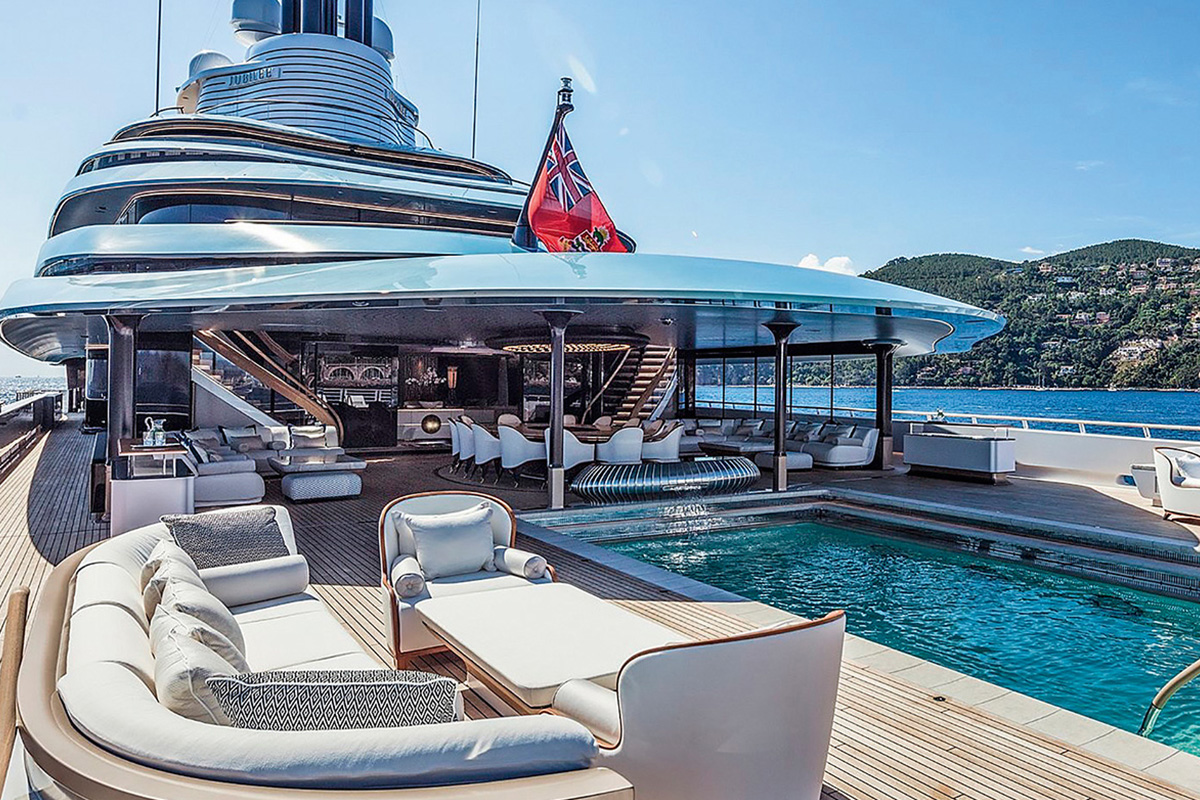 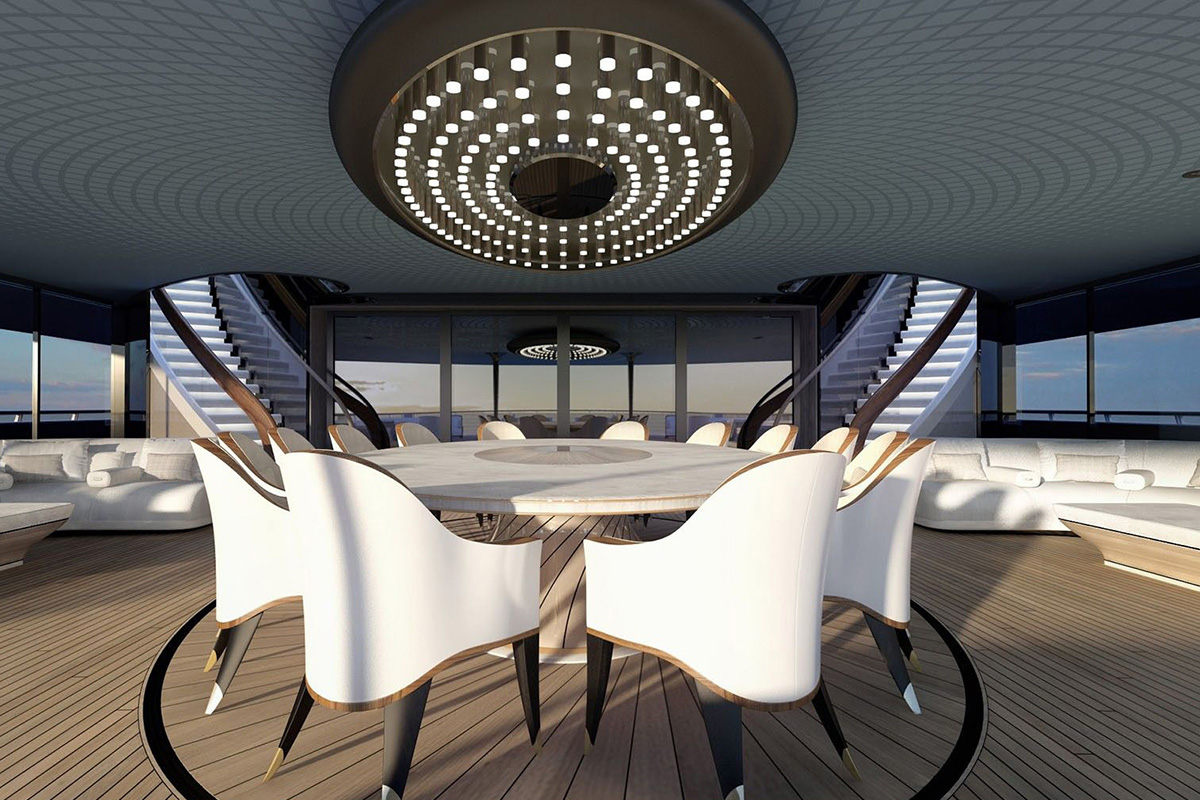 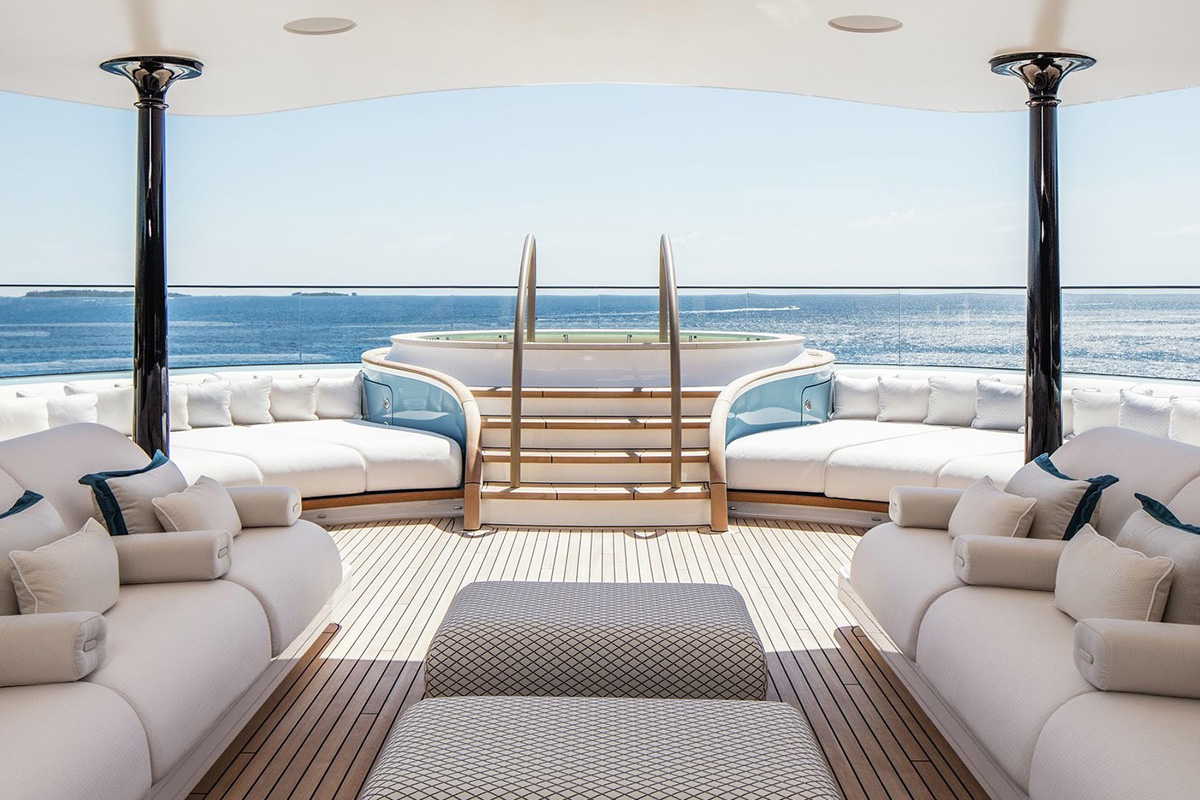 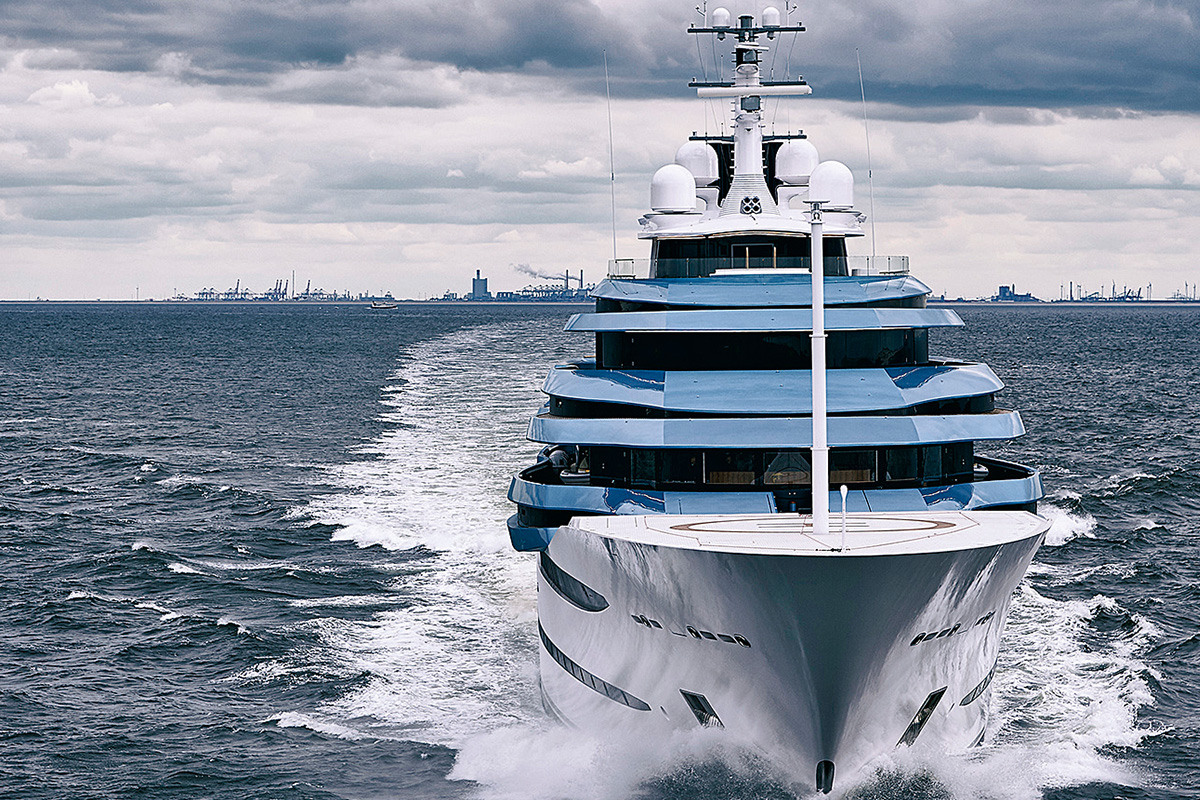 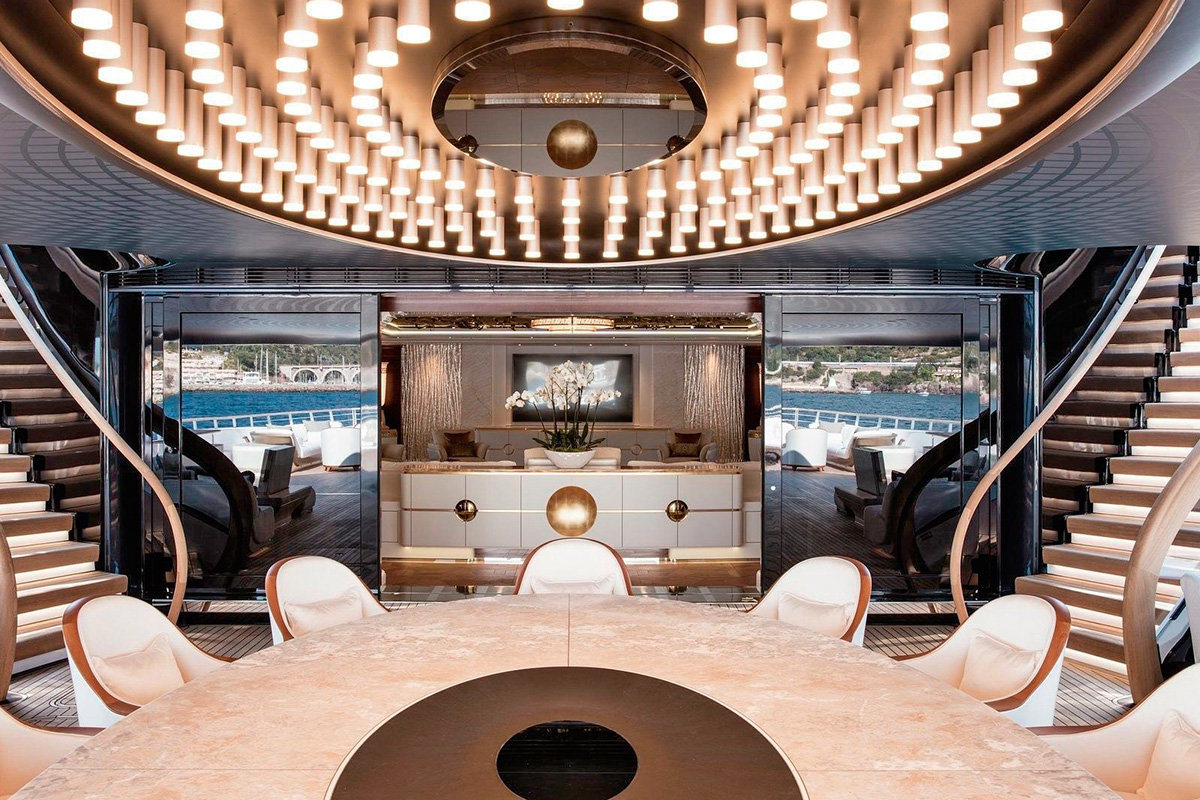 The beach club is located right underneath the pool area, while the aquarium is visible from the top, offering guests a unique experience. The jacuzzi is strategically placed forward of the bow, with relaxation areas close by. Inside, Sorgiovanni has used an abundance of white and clever lighting to create the feeling space and elegance.

Two staircases lead up to the deck from the dining room, making for a seamless transition from recreation to entertaining up to 30 guests in 15 staterooms, masterfully taken care of by the 46 staff and crew.

This elegant superyacht is an impressive 104 metres long and worth a cool US$210 million. Designed by Paolo Scanu, with interiors created by Luigi Sturchio, Lady Moura was custom-built by Blohm + Voss for Saudi Arabian businessman Nasser Ibrahim Al-Rashid. 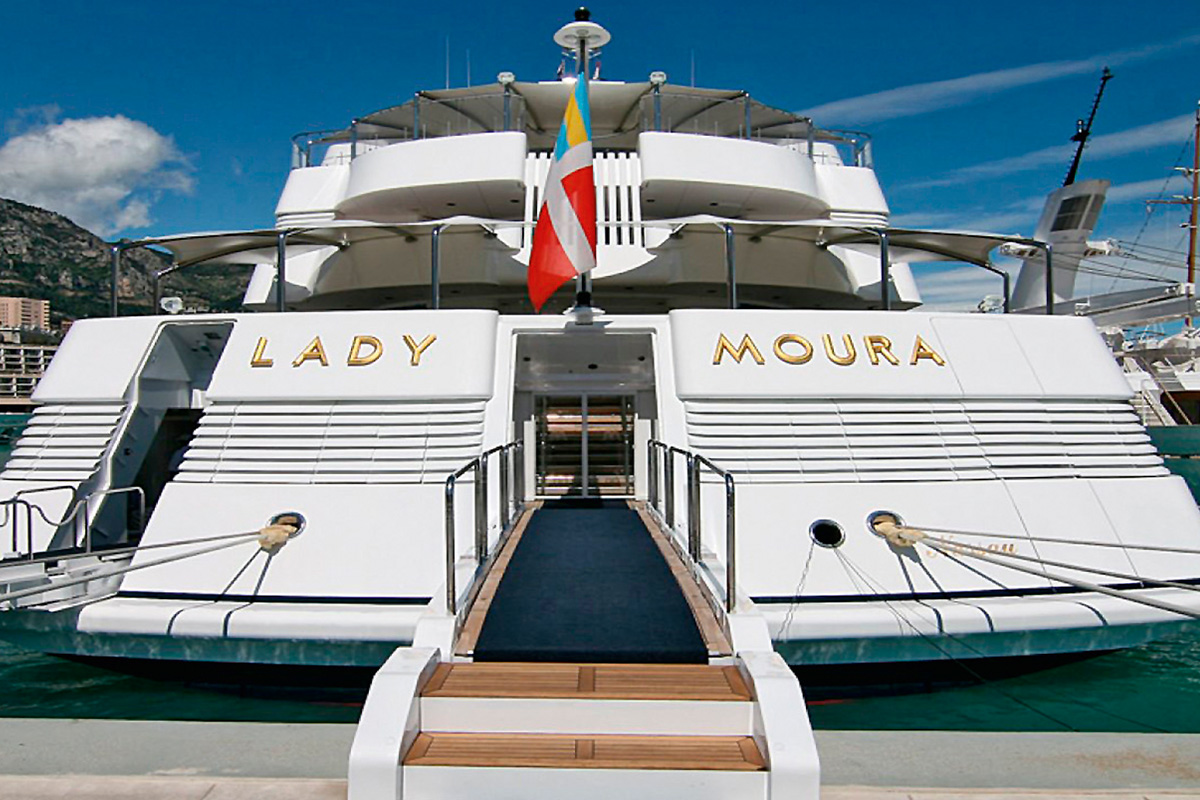 The sumptuous vessel is most famous for its prominent 24-karat gold lettering, but this is just one of many extravagances featured on this boat.

Another extraordinary luxury is Lady Moura’s simulated beach, which features a unique sand-covered platform that can be adjusted to sit right on the waterline so it feels just like the real thing. The shoreline even features deck chairs and real palm trees.

It boasts completely automated hydraulic locks and gates, to allow for the lowering of its recreational boats as well as easy access for the guests and crew.

And if that’s not enough, Lady Moura also has a spa, nightclub, lavish interiors, as well as a Mangusta 80 boat and a S76B helicopter. This marvellous vessel can accommodate up to 30 guests and carry 60 staff.

Coming in at US$250 million, Al Mirqab is 133 metres long and was built by Peters Schiffbau, in Wewelsfleth, Germany, for Qatar’s Prime Minister and Foreign Minister Hamad bin Jassim bin Jaber Al Thani. 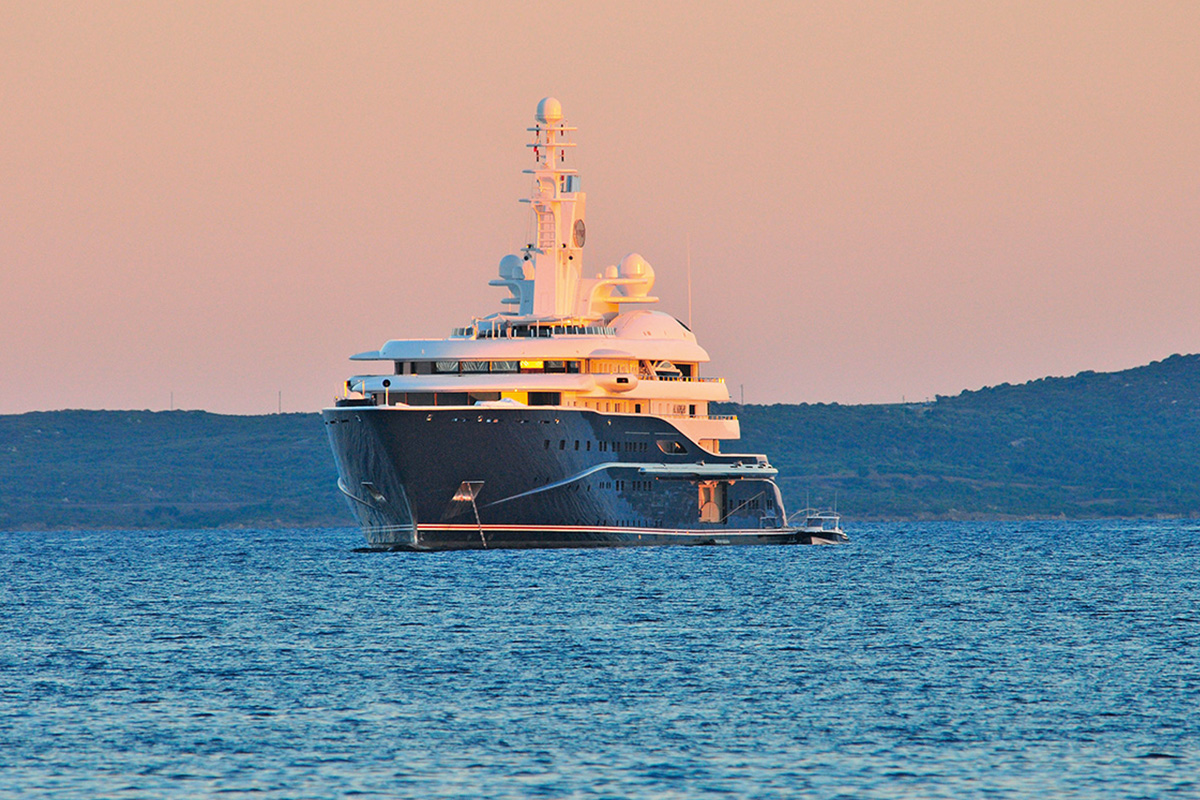 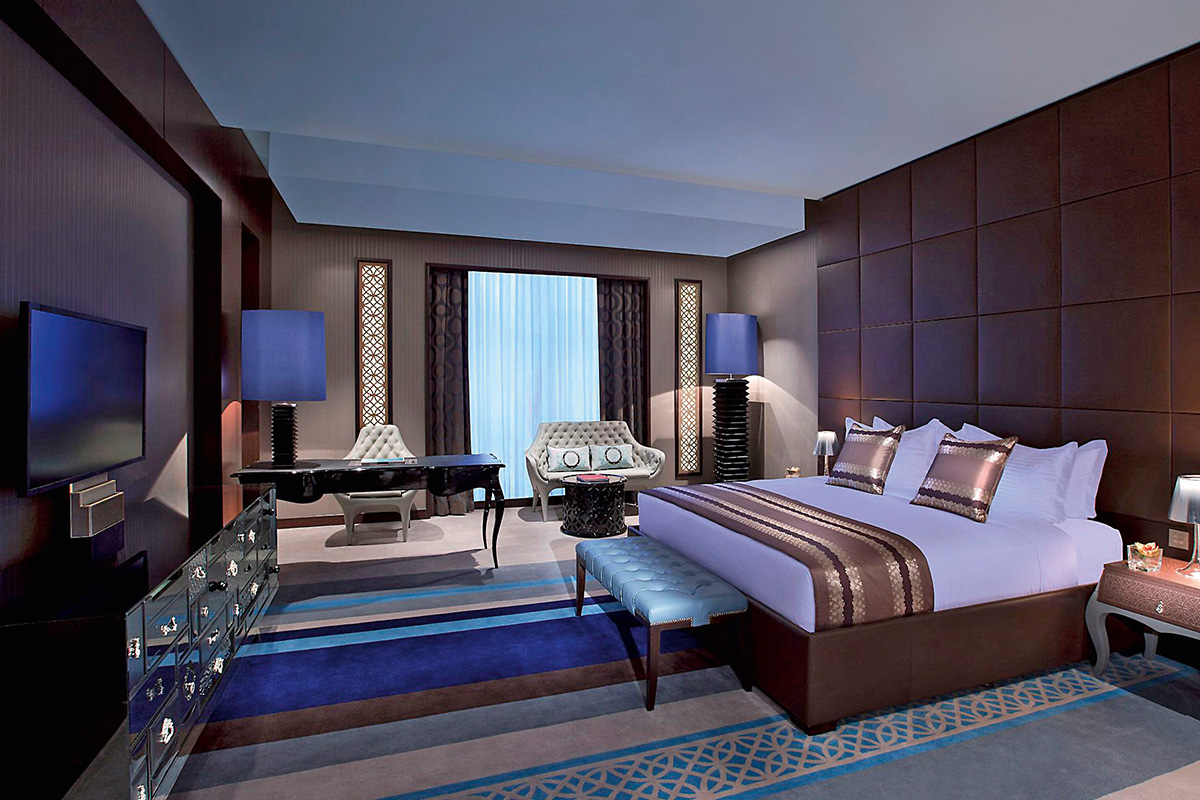 The stunning exterior was the mastermind of multi-award-winning yacht designer Tim Heywood, while Al Mirqab’s interior is by Andrew Winch Designs. “Tim is afraid of nothing and will often conceptualise ideas that bewilder shipyards,” said acclaimed yacht designer Terence Disdale of the boat’s design.

The magnificent vessel is considered one of the world’s most beautiful yachts and won the Motor Yacht of the Year award at the World Superyacht Awards 2009, as well as Best Interior Design in the motor yacht category.

The ornate staircase made from hand-cut crystal indicates the level of detail and decadence lavished on Al Mirqab. And with a cinema, gym, spa sundeck, pool and helipad, as well as outside bars, a swimming pool and a jacuzzi, there is plenty of space for 25 fortunate guests, attended to by 55 staff and crew.

Al Mirqab’s elegant living areas are huge and the interiors opulent; each of the luxury liner’s 10 vast suites has its own bathroom and sitting room, while the owner can choose from one of two magnificent VIP suites.