The biggest challenge of jigsaws isn’t the puzzle itself

Jigsaw puzzles have gained massively in popularity during the COVID-19 lockdown, but do the puzzles trigger more discord than harmony. 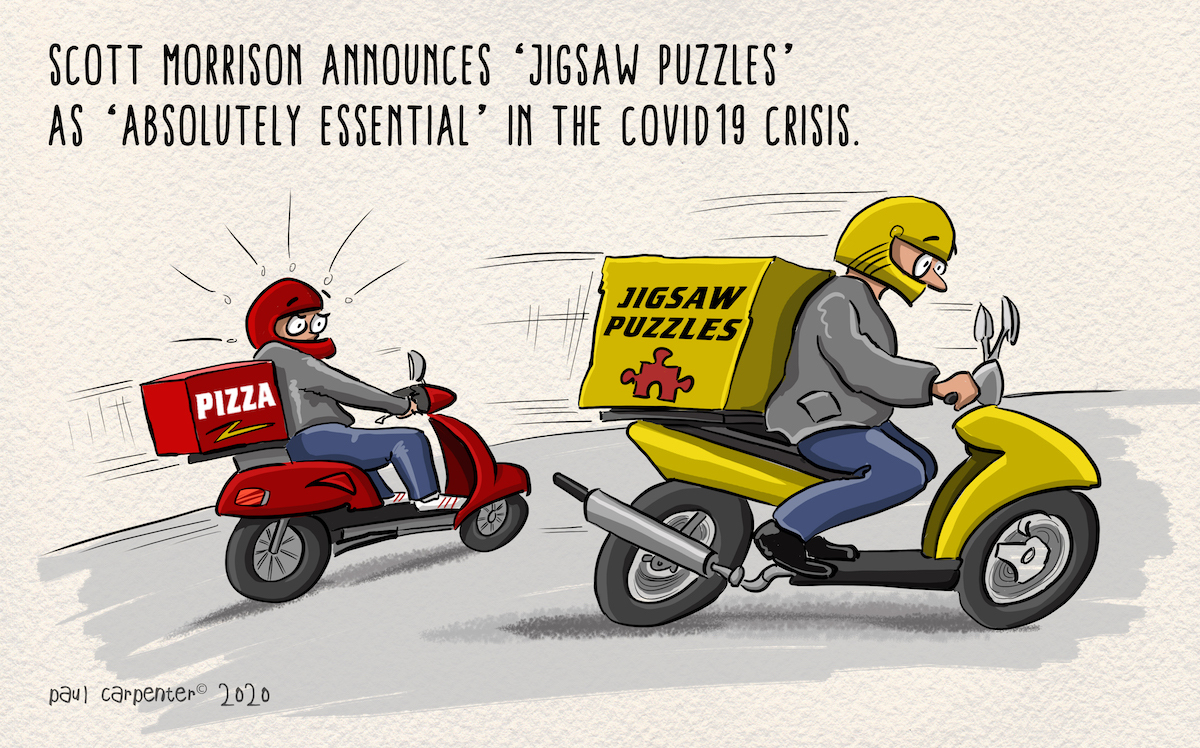 The thing about jigsaw puzzles, I’ve discovered, is that they’re, well, they’re rather puzzling. I’m not talking about the effort required to put the pieces together. I’m referring to the supreme effort needed to maintain harmony during the construction process. Because, whether you are tackling a jigsaw on your own or completing it with others, there’s a strong chance frustration will eclipse the fun and foreign feelings of inadequacy and resentment will emerge. Even among the least competitive.

I admit, I’m a bit of a latecomer to the joy of jigsaws, having considered it more as a charming hobby to be taken up later in life. Later, when there was nothing much else to do. But ‘later’ arrived much earlier than expected, thanks to COVID-19 and, with the weekend diary cleared indefinitely, what better activity could there be than tackling a 2,000-piece delightful scene featuring the wondrous Eiffel Tower?

We’re on the Right Bank of Paris peering through wisps of spindly branches at the iconic French landmark, lit and resplendent against an ink-blue sky, possibly daybreak as the hues of blue vary ever so slightly. Reflections of light bounce off the Seine, a riverboat cruises idly by having passed under Pont d’Iéna and there, in the distance, lies the luminous outline of Les Invalides. Mais oui, c’est Paris, c’est magnifique!

Pumped with confidence and bravado, I figured while a puzzle wouldn’t solve all the problems of COVID-19 detention, I could sure solve the puzzle. How hard can it be, I asked. It’ll be fun, I declared. Think of the teamwork, I crowed.

Three weeks down the track, hard has become absurd, I’m still waiting for the fun to begin and my team of three has dwindled to one. And that would be me. I’m left alone to walk past the teaser dominating my kitchen bench, glaring at its hundreds of pieces sitting smug and separate, occasionally finding a few conspiring on the kitchen floor, even a couple of renegades clinging gamely to the cat’s bum.

While piecing together the puzzle remains elusive, I’ve learned a hell of lot about the world of dissectologists. And it’s not necessarily a pretty one. Sure, there are plenty of “A-ha” moments of triumph, but I’d hazard a guess there are definitely more, “Are you kidding!”, “But it should fit!”, and, “There must be a piece missing!” moments.

Which leads, of course, to the evolution of alarming personalities. Just when you thought you knew someone, along comes the jigsaw to bring out the worst in people. A competitive side to the most serene, jealousy and possessiveness erupting from the normally content and tantrums from the usually peaceful. And that’s just me.

You see, I’m The Optimist. Full of wild enthusiasm and hope, strong in the belief that sorting the colours is enough, I select a piece, often whooping in anticipation and poke it in. Shove it in. Force it. It’s usually The Nerd who quietly points out that it doesn’t fit, no matter how monumental the attempt. Pouting.

The Nerds are committed strategists. They thoughtfully choose a piece from among the hundreds of other ostensibly identical pieces and, with brow furrowed in concentration, hold it up to the box to reveal where it fits, before clamping it perfectly into place. Smug.

However, nothing generates resentment in me more than The Passer-by. That’s the one who walks past, usually on the way to the fridge, picks up a piece – more often than not the one The Optimist has spent hours searching for – and effortlessly locks it in. Easy.

Now, I’m not a competitive person. Nor am I a resentful type. But nothing has provoked feelings of bitterness and irritation more than this random strolling past, finding my piece – and it is mine – and slotting it in like a match made in heaven. And nothing frustrates me more than the patient strategy of The Nerd. Yet, both have done more to advance my Paris fantasy than me, The Optimist, who has contributed little, bar a few theatrics and threats.

You get the picture, right? Because I sure haven’t.