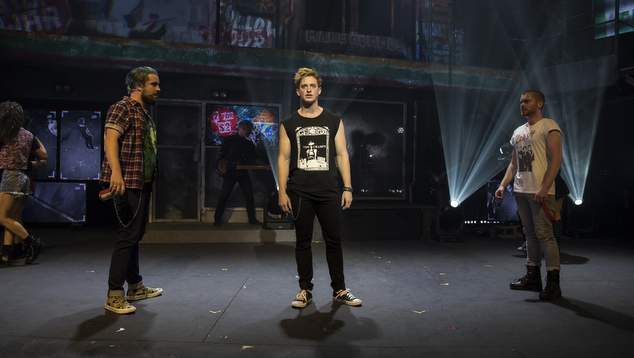 Don’t bother investigating motives, don’t put this heinous offence into context, in fact don’t bother talking to this vile perpetrator at all. He made a clumsy, crude joke. Sack him!

Yep, it’s curtains for you Linden Furnell. Take your final bow and begone! Despite your amazing talent and unwavering commitment to American Idiot, your 10-second, brain snap and pathetic attempt to be the class clown, means the show just can’t go on. Not with you in it, anyway.

Everyone is now safe from your appalling jokes, particularly the actors, producers and crew of the shake & stir theatre co, an interesting name really for a company which seemingly can’t cope with a little shakin’ and stirrin’.

Don’t wanna be an American idiot

Furnell played the lead role of Johnny, one of three angry young men fleeing their suburban lifestyle, who has a fling with Whatsername, played by Phoebe Panaretos.

Months into its nationwide tour, Furnell and Panaretos had developed a comfortable enough rapport to smoothly navigate the show’s sex scene.

Recognising sex scenes were a “minefield” in which actors needed to “trust each other completely’”, Furnell said he intermittently checked with Panaretos off stage to ensure she was at ease with the physicality the scene required.

What he didn’t check was her radar for offence.

In the #MeToo environment, women’s radar is set to hypersensitivity, finely tuned to be violated by odious schoolboy humour, harassing sideways glances or, heaven forbid, the assault of an uninvited kiss.

During a preview show on Sunday, following the required sex scene and during a bit of off-mic banter, Furnell made a crude remark about menstruation.

Really Furnell? A period joke? How puerile. Don’t you realise we women have heard them all? Jokes about the monthly curse made by men are passé, so last century. Women are the only ones allowed to joke and laugh about that time of the month and we do it all the time.

Anyway, apparently Furnell’s lame attempt at humour made Panaretos so uncomfortable it threw her off her show. But as soon as he realised he had offended her, he apologised, accepting his comment was in poor taste and that he had “assumed too much comfort in a work friendship”.

Understandable, really, when you consider they had been touring and performing intimate scenes together for months.

But it was too late. Panaretos had already complained to management and, without so much as a conversation and a chance to redeem himself, Furnell was told to pack up and go.

Welcome to a new kind of tension

The company justified the dismissal in the interests of maintaining a healthy and safe workplace. Furnell had breached the company’s ‘Statement of Zero Tolerance to Inappropriate Behaviour’, with the company’s guidelines stating that sexual harassment occurs where a person “engages in unwelcome conduct of a sexual nature in circumstances in which a reasonable person would be offended, humiliated or intimidated” and includes “suggestive comments, jokes, conversations or innuendo”.

Was Furnell’s behaviour sexual harassment? I suspect not. Insensitive? Probably. He admitted the joke was ‘‘the kind of thing you say to make your friends go ‘euugghhh gross’’’.

Was Furnell’s behaviour sexual harassment? I suspect not. Insensitive? Probably. He admitted the joke was ‘‘the kind of thing you say to make your friends go ‘euugghhh gross’’’.

We don’t know what Furnell actually said. We don’t know if it was his first indiscretion, or one of many. What we do know is that the actor owned up to his mistake and personally apologised to Panaretos.

There’s a suggestion that Panaretos didn’t intend for her leading man to be sacked. Who knows? I’m more intrigued by her reaction to immediately complain to management, rather than taking it up with Furnell.

In pre-production interviews, Panaretos described her American Idiot character Whatsername as “really aggressive and assertive”, a “wild and messy woman who stood up for herself and held her own next to men”. Panaretos admitted the role “unleashed” something in her, particularly during the scene where she tears Johnny to shreds, branding him an idiot.

But hang on, I’m confused. Panaretos had the script which called for her to tear shreds off Furnell every night on stage. She knew the words, why didn’t she use them when she felt offended by Furnell’s schoolboy joke?

Because this is exactly what female empowerment is. If you’re offended by a bad joke, the first line of defence is to stamp it out. Yourself. Men, although definitely more guarded these days, still say stupid things to women in the workplace, just as women, less guarded, throw them at men.

But there are hundreds more men armed with even more careless comments waiting in the wings outside work, and management can’t help you in a club, a street, or on the bus. Rather than learning the rules of the OH&S handbook, retune your radar to common sense and learn to help yourself. If all else fails, then call in the cavalry.

Furnell admits he has an impulsive mind and “somewhat inactive filter”, but that doesn’t make him a sexual harassment perpetrator. It just makes him an idiot.

What do you think? Have we gone too far? Is making a joke in poor taste a sackable offence? Would mediation have been a better solution? How do you handle a situation when a colleague has crossed the line?