Oddly, Said Hanrahan comes to mind most often when I read about, not Australian farming, but transport in Australian cities. And especially last week, when the infrastructure lobby group Infrastructure Partnerships Australia (IPA) issued the latest version of its Australian Travel Time Index.

I first ran across it in The Australian, under the headline “Airport commuters in for long haul as traffic shockers revealed”. It began:

“Victorians have the longest trip to the airport in the country and it is getting worse, with new figures showing the average journey from Melbourne’s CBD to Tullamarine has blown out to almost three-quarters of an hour.”

The Age, making the same point less breathlessly, headlined its story “Melbourne traffic: New data reveals how much longer it takes to get to airport”. The text began:

“The time it takes to travel from the CBD to Melbourne Airport has increased from 35 to 42 minutes in the past two years.”

All of this would have suggested to a naive eye that governments had left the Tullamarine Freeway – ‘the Tulla’ – to rot.

These reports buried one rather important detail: the Tulla is in the middle of a major road-widening effort designed to reduce trip times. It’s bedecked for kilometres with temporary lane lines, temporary barriers, workers with signs saying ‘SLOW’, big digging machines. They’re pretty hard to miss.

When I drove on the Tulla the other morning it was as slow as I have ever seen it. But if you’re widening a road, you’ll need roadworks, and roadworks temporarily narrow a road and hold everyone up. Everyone in Melbourne who regularly travels interstate knows this. We check Google Maps to see how long our trip might take. We adjust.

I rang the reporter at The Australian who wrote the story. She noted that she’d included a comment in the third-last par, from the Victorian Roads Minister, saying the road-widening would take 30 minutes off the airport-CBD round trip. Didn’t that call into question the headline and opening paras? “It’s in the article,” she said.

The Australian’s story actually didn’t have anyone pointing out that the road-widening would have affected the numbers in the IPA report. The Age’s story, to be fair, did quote IPA chief’s Brendan Lyon making that point – deep down in the story below a video, two photos, an ad and a solicitation for an email newsletter. (Kudos, by the way, to the Australian Financial Review, whose reporting has been of an entirely different and better quality.)

Newspapers have always used their headlines to misrepresent for effect. These days they have greater incentive to do it: their staff get electronically assessed on how well their headlines induce internet clicks. And that same internet often lets newspaper audiences check the data underlying stories, even as they eat their morning toast.

But these stories would have raised questions even if the internet had never been invented. Media outlets were ignoring at the top of their stories something that many of their readers drive through every week.

And when you google to IPA’s full report and interactive chart, you find an equally interesting result: despite all those Tulla roadworks, Melbourne’s overall road network performance is actually better now than it was at the Index’s base date, the third quarter of 2015. (“Travel times have remained stagnant,” reported The Age.) 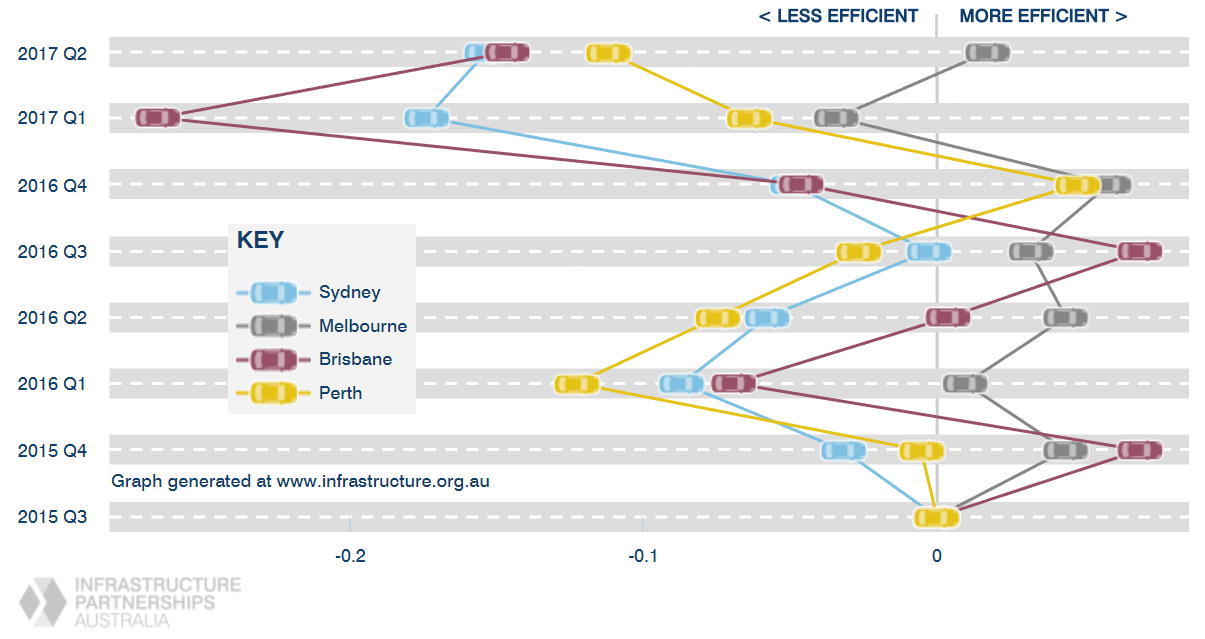 As the IPA report shows, Sydney’s overall transport times have blown out more than that of the other three cities – again, largely due to roadworks. The Australian’s report at least named roadworks high in the story as a factor in Sydney’s problems.

“The biggest drag on traffic in Sydney is the short-term disruption caused by the unprecedented level of transport infrastructure being built in every corner of that city.

“This means that while Sydney and Brisbane are equal last, Sydney can expect to see major improvements from 2019 as multiple construction sites that are slowing traffic now turn into new motorways and railways that ease congestion.”

Lyon goes on to argue that Brisbane faces the biggest infrastructure challenges of any major Australian city.

The real story is that Melbourne and Sydney are both in the middle of a transport infrastructure boom, with projects like Sydney’s WestConnex, Western Sydney Airport and M4 upgrade, and Melbourne’s Metro Rail. As a Reserve Bank of Australia graph shows. It’s not on the scale of the mining boom, but it’s noticeable, and it has sent public infrastructure investment to heights not seen in at least two decades. 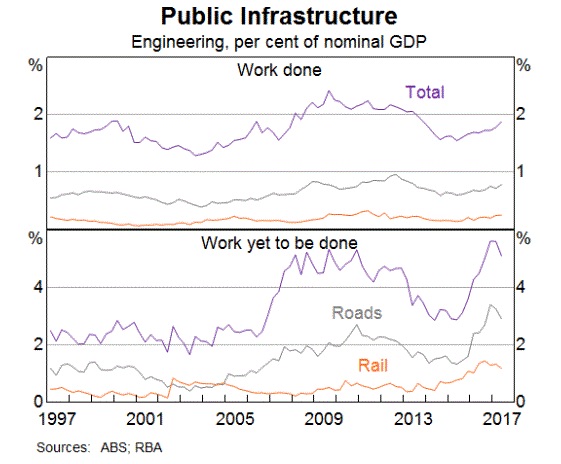 This boom is pretty well timed, too: in 2017, borrowing is cheap and neither mining nor housing construction is soaking up labour. And we have a body, Infrastructure Australia, publishing report cards on which pieces of infrastructure make the most sense. In other words, we’re building new infrastructure at a time when it makes sense to do it, with better checks and balances than ever before.

The media has strong incentives to complain that we’ll all be rooned. Occasionally, they’re right. But it’s hard not to notice that, on this issue, the place actually seems to be in reasonable shape.