When will blokey culture in Australian politics finally die?

Women’s history month is almost over, but there’s one thing we should discuss before it concludes, says Jennifer Neal. 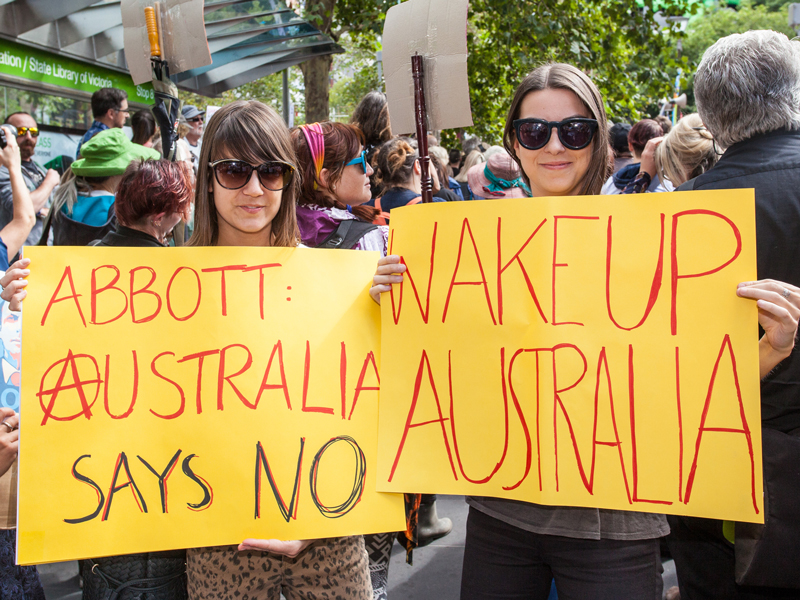 Australian politicians aren’t known for their finesse. From Pauline Hanson’s infamous fear of Australia being “swamped by Asians” to former Prime Minister Tony Abbott’s threat to “shirt-front” Vladimir Putin, the country’s elected officials are known for their colourful use of the English language when it comes to insults, debates and every so often, actual policy.

Public opinion tends to err on the side of harmless amusement. Many Australians proudly recall where they were when former Prime Minister Bob Hawke drunkenly proclaimed, in the aftermath of Australia’s win in the 1983 America’s Cup: “Any boss who sacks anyone for not turning up today is a bum.”

But alas, the times are changing, and so must our elected officials and the standards to which we hold them.

Sky News just announced that former Labor leader Mark Latham was sacked for his offensive comments about a video for International Women’s Day featuring students from Sydney Boys High School. The video showed clips of male students voicing the concerns of their female peers and loved ones, expressing the importance of feminism. And in true-blue Aussie fashion, Latham reacted by questioning the sexual orientation of one of the boys, which he then followed up with his most egalitarian comment in an age: by calling them all “di*kheads”.

The fact that this sort of behaviour by politicians surprises anyone in Australia is the real shock. In 2011, then-opposition leader Tony Abbott attended a Carbon Tax rally in which he happily took the stage before 3,000 people who called the sitting Prime Minister Julia Gillard a witch, a liar and “Bob Brown’s Bi*ch.” And for his participation in this repugnant moment, he was not punished, or relieved of his duties. He was elected to the highest office in the land.

Australia has a long, rich history of rewarding bigoted behaviour that damages the moral fabric of our society from top to bottom. And removing one former politician from television does nothing to address the underlying toxicity of blokey culture in Australian politics. Far too many people wrongly interpret such maliciousness as harmless larrikinism. In reality, we are single-handedly appointing, aiding and rewarding people we entrusted to make Australia better, who are instead stifling our ability to progress as a healthy, inclusive society.

The contempt for political correctness has become so ingrained in our cultural fibre, that we are missing a vital opportunity to educate ourselves on what an egalitarian Australia could look like.

One where boys are praised for speaking up against sexism, and men are punished for encouraging it.

We are missing an opportunity to hold our officials accountable, and demand that they set a better example, one that is worthy of Malcolm Turnbull’s underlying contempt in his recent hostile exchange with President Donald Trump.

That’s not to say that all of our elected officials have allowed their views to stagnate. Pauline Hanson has recalibrated her particular form of bigotry from one against Asians to one against Muslims which, to be fair, encompasses men and women from a variety of different races, ethnicities and nationalities, many of which reside on the Asian continent.

At least her bigotry is progressive. But maybe we should aim for something better – one that doesn’t make us comparable to the views we condemn from our American constituents.

And while some may be encouraged by Latham’s sacking, I personally wouldn’t get too excited until we can hold politicians in office as accountable for the words that come out of their mouths, as we do when they’re out of office.