How to be competitive in the age of AI

Sixty-five years ago, tech scientists started driving the artificial intelligence train that is now an unstoppable juggernaut impacting all walks of life, whether we realise it or not, writes Stephen Corby.

There’s a name that’s mentioned in every story written about artificial intelligence (AI) since 1984, and it’s not a scientist. It’s Arnold Schwarzenegger. So let’s get this out of the way. The Terminator is a very fine film, but it is not a documentary.

Futurist and author Gihan Perera, who has been watching computer intelligence grow exponentially for 30 years, admits, “Artificial intelligence scares some people. They think it’s a killer robot. They’re thinking of Arnie Schwarzenegger, but that’s not what AI is. It’s just self-learning software.

“We don’t need to worry about ‘the singularity’. That’s dystopian thinking. But there’s also a utopian view where, thanks to AI, we’ll all be living lives of luxury, doing everything we choose to do.

“The reality will be somewhere in between.”

This sounds vaguely reassuring. What’s not in doubt is that businesses which don’t quickly adapt to and capitalise on the myriad advantages of AI will be terminated by those that do.

“In business, if you’re not engaging with AI, you’re going to get beaten; it’s that simple,” explains Perera, author of Disrupted: Leading the Change Through Crisis, Recovery and Growth.

“One of the biggest mistakes that I see leaders make with AI is that they don’t realise how powerful it already is. They pray that they won’t need to get on the AI bandwagon because they think it’s too difficult, but it’s already here, and the businesses on the bandwagon are riding away from them.”

The key is a term that humans generally struggle to understand – ‘exponential growth’ (rarely seen in nature, or at least, not until a health pandemic comes along).

“We don’t see much exponential growth in real life, and the best business example is Kodak, which was one of the biggest brands in the world in 1995, and filed for bankruptcy in 2012,” Perera says.

“Kodak didn’t understand exponential growth. We often hear that they were afraid of digital, but it was actually someone in the company that invented the digital camera, took it to senior management and said, ‘What do you think of this?’

“You might think management said, ‘Destroy it. It’s going to kill us,’ but it’s the opposite; they said, ‘This thing is grainy. It’s slow. It will never be as high quality as film. Don’t worry about it.’

“But they didn’t take into account that technology grows exponentially, and they were quickly overtaken.”

Another thing a lot of people don’t realise is just how much AI is already a part of their everyday lives, and how much it is driving the success of some of the biggest companies on the planet.

AI already sets the prices on Amazon, predicts your Google searches, runs your GPS, sends you an Uber, matches buyers and sellers online, recommends songs on Spotify and even qualifies borrowers for companies like Ant Financial Services Group.

“In business, if you’re not engaging with AI, you’re going to get beaten; it’s that simple.” – Gihan Perera

This giant Chinese company – valued at around A$400 billion, or three to four times the equity value of Goldman Sachs – uses AI for consumer lending, credit-rating services, investment funds and selling health insurance.

Marco Iansiti, a Harvard professor of business administration and co-author of Competing in the Age of AI, explained in the Harvard Business Review, “Unlike traditional banks, investment institutions, and insurance companies, Ant Financial is built on a digital core.

“There are no workers in its ‘critical path’ of operating activities. AI runs the show. There is no manager approving loans, no employee providing financial advice, no representative authorising consumer medical expenses.

“And without the operating constraints that limit traditional firms, Ant Financial can compete in unprecedented ways.” This isn’t the future; it’s what’s happening right now, and regardless of whether you run a digital startup or are part of a traditional business, it’s essential to understand the revolutionary impact AI has on operations, strategy and competition, Iansiti says.

Again, it’s important to realise we’re not talking about the AI of science fiction here – computers that are indistinguishable from humans and able to reason like us, which is known as ‘strong AI’.

All you need to shake up a business completely is computers that can perform and continually get better at tasks, lots of them, traditionally left to humans, or ‘weak AI’.

“Software makes up the core of the firm, while humans are moved to the edge,” as Iansiti puts it.

This will, of course, mean fewer jobs for humans partly because AI systems will work 24 hours a day for almost no dollars, which humans cannot and will not – and the implications are far reaching.

“AI-based operating models can exact a real human toll,” Iansiti says in the Harvard Business Review article. “Several studies suggest that perhaps half of current work activities may be replaced by AI-enabled systems. We shouldn’t be too surprised by that.

“After all, operating models have long been designed to make many tasks predictable and repeatable. Processes for scanning products at check-outs, making lattes and removing hernias, for instance, benefit from standardisation and don’t require too much human creativity.

Toby Walsh, Professor of Artificial Intelligence at UNSW Sydney’s School of Computer Science and Engineering, sees hope in that latte example, however, and says that in some ways, AI will make humans more valuable and valued.

“Computers aren’t going to take over all jobs because we are social animals. We prefer human contact. I mean, why do we pay humans to make coffee when a machine can make it better? Because we like the fact that baristas flirt with us, gossip with us,” Walsh insists.

“There’ll be plenty of jobs like that – doctors, for example; they will have AI assistants, but we will prefer a human telling us the bad news because they have empathy.

“Ubers will be autonomous eventually. That’s how they’ll really start making money, but people will pay extra to have a chauffeur. They might not even drive the car, but we’ll pay for them to carry our bags and chat to us.

“We’ll also pay extra for humans because we prefer them.”

Perera agrees that it’s not time to panic yet. While the growth of AI may be exponential, people, on the other hand, are slow to change, “so we’ve got time”.

“McKinsey actually did a report that found that robots and AI will create more jobs than they destroy, but what we worked at 20 years ago is not going to work in the future,” he cautions.

“It’s also going to change the kind of jobs we have. When Uber went looking for a new boss, they hired a tech expert, not someone with experience at a taxi company.”

Walsh, who has been fascinated by AI for 40 years, agrees that companies and business leaders need to adapt because things are changing at incredible speed.

“The past decade has been the most exciting because AI has moved out of the laboratory. Ten years ago, I never spoke to a journalist or a politician about it, and now, I’m constantly being asked, ‘Where is this taking us?’” he says.

“It’s true, though, that any company that sits on its hands will be eaten by its competitors. Look at Amazon, FedEx. They’re the early adopters. They’re the ones that are prospering while other companies are going to wither.”

Walsh says the short-sighted way to introduce AI into your business is to merely focus on reducing headcount, but he says that’s “a race to the bottom”. 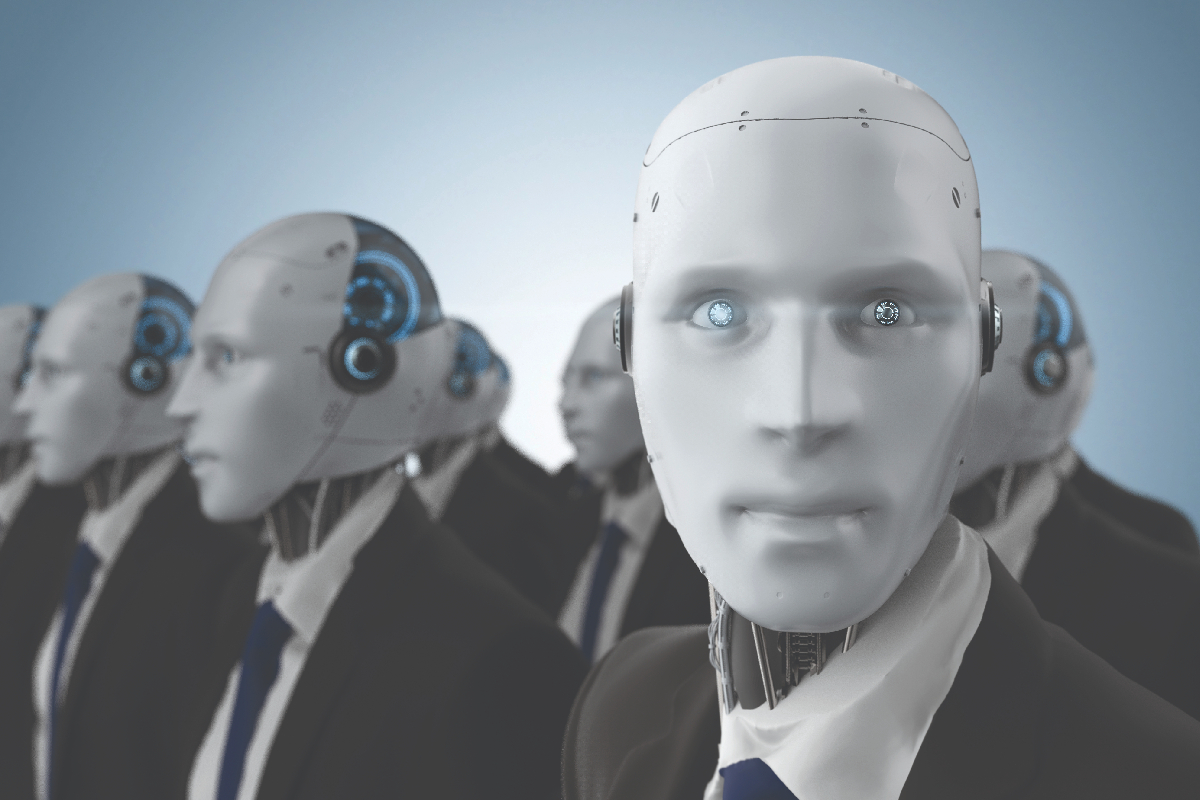 “The other way to look at it is as an opportunity to see that people’s time is freed up by AI, so they should concentrate on improving the product, moving the business forward,” Walsh says. “It allows you to concentrate on what people are good at, that emotional intelligence that humans have.”

Perera, who regularly helps businesses and large corporations integrate AI into their workplaces, has very specific advice. He says the first thing to do is buy the AI tools that can assist in your peripheral operations.

“AI can record your Zoom meetings, file them away and then give you instant retrieval, based on a few words you recall from the meeting,” he says.

“It can also answer an email from someone seeking to interview you, look at your diary and then – because it knows what time of day you like to do that kind of thing – offer that person some options and set up the whole thing for you. The other person will assume they’re dealing with your human EA. It’s that seamless.”

The second step is to look at how you can build AI into your main operations: “Things like your supply chain, production, collecting data, getting AI to analyse and take advantage of that,” Perera explains.

“And you don’t have to build this from scratch. You can rent AI the same way you rent office space. Google and Amazon rent out their incredibly powerful machine-learning systems for your use.

“You can even use IBM’s Watson for US$100 a month. It’s an incredibly powerful machine-learning AI that actually beat humans at the game show Jeopardy, which is something we think only humans could understand because it uses double meanings and wordplay.

“But it wasn’t trying to work like a human brain. It was using data and creating patterns. You can imagine how useful that would be to businesses.”

So just how profound a change are we looking at in the way that business, and our lives, are run? We’re talking genuinely revolutionary, like the industrial revolution, only bigger and faster, according to Walsh.

“People forget that the weekend was invented by the industrial revolution. That was a human-made construction, brought about by workers wanting Sunday off, and because of the gains made by industry, they got that,” he explains.

“We could end up with a three-day weekend. You could pay people more for less work and they’d be happier.”

As for timing, if you look back at 2020, it was clearly a time of change in many ways, but Perera believes it will be a landmark year in what he calls the “technological revolution”.

“We’ll look back in 20 or 30 years’ time at how much COVID-19 accelerated digital change and automation, the way we all started to work through screens, contactless payment, online shopping,” he predicts. “We’ll look back at this as a really significant moment in that change.”