Karlie Kloss never dreamed of being a supermodel, but instead a businesswoman

Supermodel, entrepreneur, philanthropist and self-confessed baking nerd, Karlie Kloss is a force to be reckoned with. 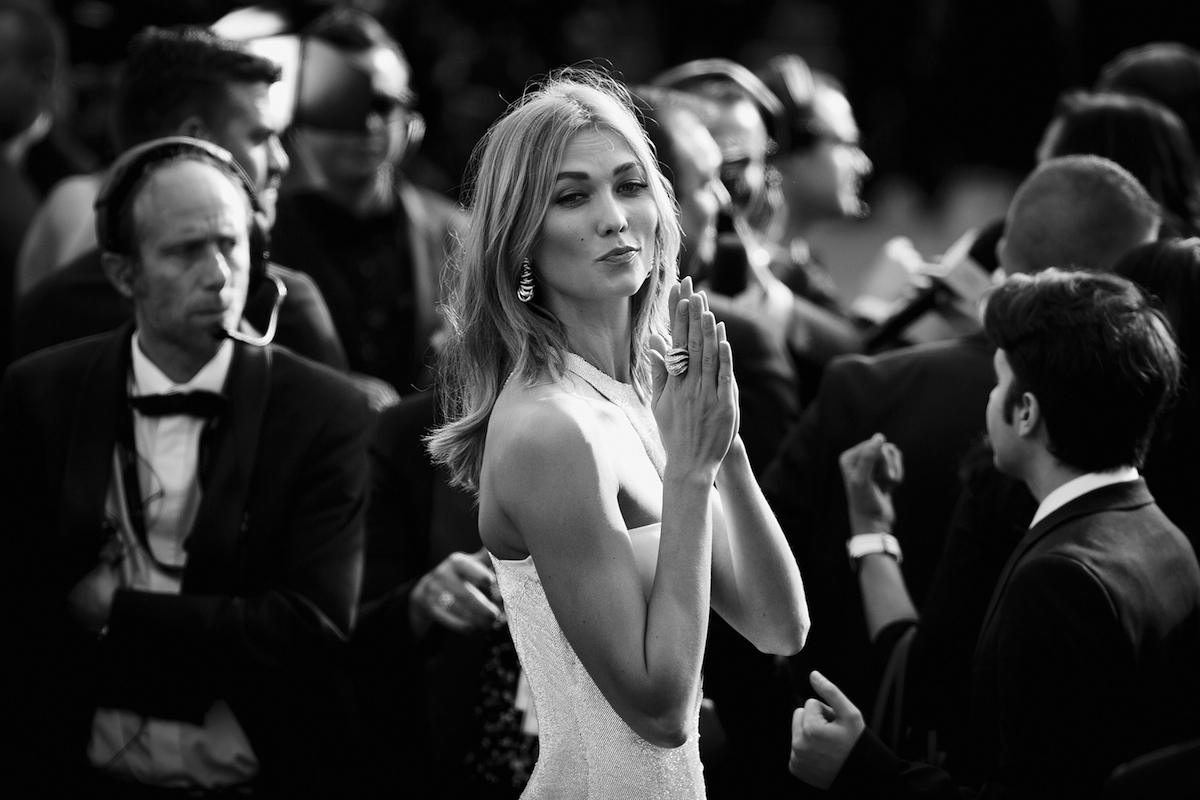 It does seem, lately, that the job of being Leader of the Free World can now be done by just about anyone – no previous experience, moral fibre or even intelligence required – as long as they’re a man. But if any woman is going to take on the role, and obviously do it properly, it’s Karlie Kloss.

Kloss is an almost super-human supermodel who has a business brain, a conscience, and a powerful work ethic. Plus, she’s married to Joshua Kushner, the brother of White House insider Jared, who also happens to be married to Ivanka Trump.

From supermodel to commander-in-chief might have seemed an unlikely arc once upon a time, but you need to consider that Kloss never wanted to be known for how good she can make clothes look. First and foremost, from a young age, she wanted to be a businesswoman. Making millions of dollars out of modelling is what you might call a happy accident.

“I always thought I’d go into medicine or a science field, and I love business, learning and the creative industries,” – Karlie Kloss

“Long before I really understood fashion, I always had a knack for business and was excited by the idea of being an entrepreneur,” says Kloss. “Honestly, I never owned a pair of heels until I became a model. I remember buying a pair of black high heels from Target in St. Louis because I had to practise learning how to walk in them.

“The fact that I’m sitting here today, 10 years into a fashion career as a model – that was certainly not the path that I had envisioned. “I always thought I’d go into medicine or a science field, and I love business, learning and the creative industries. This is a creative industry that I fell into, but have really enjoyed.”

Kloss was discovered in her home town of St. Louis, Missouri – incredibly, at just 13 years old – and snapped up by Mother Model Management, who also launched Ashton Kutcher’s career.

By the time she turned 18, in 2010, she was making more than US$1 million a year, and by 2018 she was ranked by Forbes as the second-highest-earning model in the world; her US$13 million second only to Kendall Jenner’s US$22.5 million.

She’s also a modern social media star, and there’s no denying the power, or the reach, of her influence. Her YouTube channel, Klossy, has racked up more than 35 million views (which no doubt adds up to a few ad dollars); on Twitter, where she disarmingly describes herself as a “six-foot-two giraffe from the Lou!”, she has almost six million followers, with another 7.9 million on Instagram.

Aside from growing up in a social-media-savvy world, what differentiates Kloss from other big-name models who’ve branched out into side projects is that she didn’t wait until she could see the end of her career runway to try other things.

Today, she’s almost as well-known for what she does outside of modelling, in particular, her Kode With Klossy initiative, which she founded in 2015 after discovering the joy of tech for herself. 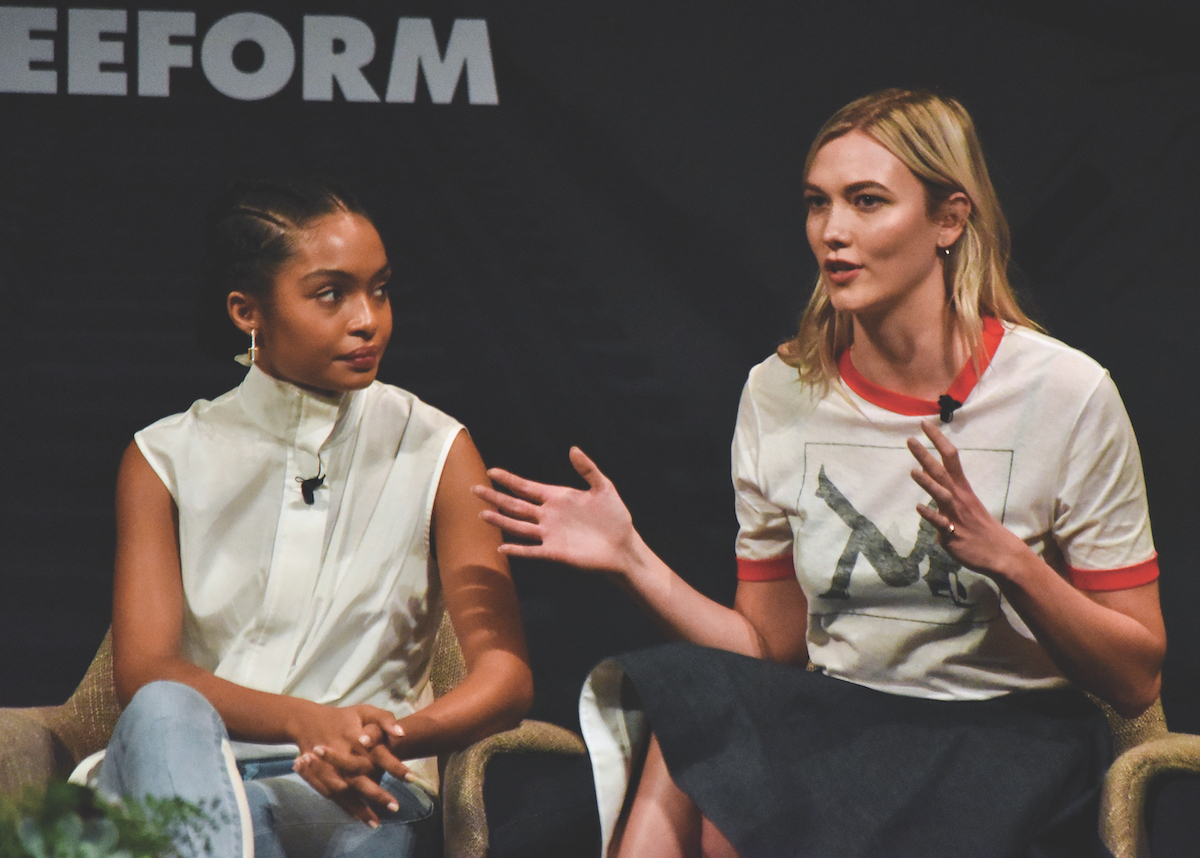 Actress Yara Shahidi of Grown-ish and Karlie Kloss speak on stage at the Freeform Summit in Hollywood on January 18, 2018.

In the summer of 2014, inspired by entrepreneur friends, including Instagram co-founder Kevin Systrom, she opted to skip her beach vacation for a coding boot camp in New York.

“It’s how the world is actually built – code is the secret language that builds all the digital architecture of everything that we rely on,” she says, with evangelical zeal. “And pretty much a fraction of people know about it, yet we all use it.

“I’ve always been intrigued by the direction nobody else is going in. Not following the herd. I really love understanding big, abstract ideas and the idea of building an app or software. You can literally learn this in a relatively short amount of time and it can completely transform the way that you see how this (she holds up her smartphone) works, and why.

“I was like, ‘Oh my gosh, why do more people not know this? It’s running our lives and it’s only going to continue to do so.’” That thought train led her to launch her own platform to make a difference, rather than to make money. Kode With Klossy is a charitable organisation that provides free coding camps for girls and awards scholarships to young female developers.

Perhaps even more importantly, Kloss’s involvement has helped make coding cool, as Instagram’s Systrom points out: “Karlie’s made coding and technology appeal to young women and girls around the world.”

Kloss says she understands that math and science aren’t for everybody, and that she’s not trying to force every girl to become an engineer, but personally she takes a computer-science course whenever she can.

“I have sincere passions and curiosities in understanding how the world around me works, and math and science ultimately can explain why and how,” she says.

“I realised there was an opportunity to do more not only for myself but for others. There’s a real confidence that comes with learning something challenging. These young girls are recognising their potential in an industry in which they previously hadn’t seen themselves.

“I feel like what I’ve been able to experience through Kode With Klossy has been an amazing gift that keeps on giving. Just being a small part of these smart women’s journeys… I feel like I’m getting more than I’m giving.”

Despite living in the celebrity stratosphere and sharing sparkly times with everyone from Taylor Swift and Katy Perry to Princess Beatrice, her unspoiled, down-to-earth character is further reflected in the fact that she loves baking, describing herself as “a baking nerd”.

“Long before I really understood fashion, I always had a knack for business and was excited by the idea of being an entrepreneur,” Karlie Kloss

“When I received my first modelling cheque, I went straight out and bought a KitchenAid,” she recalls. That passion has led her to launch her own range of baked goodies, Karlie’s Kookies, which are made in collaboration with Momofuku Milk Bar.

The cookies are vegan and gluten-free, and eating them makes you feel extra good because Kloss gives the proceeds to children’s charities. Karlie Kloss shares the stage with Michelle Obama during an event to promote higher education at Temple University’s Liacouras Center in Philadelphia, US.

As well as famous friends, and millions of followers, Kloss has collected high-profile admirers along the way, including famous fashion icon Diane von Furstenberg, who raved to Time magazine about Kloss when it included her in its 2016 list of the world’s 100 Most Influential People.

“Karlie Kloss is the epitome of the ideal American millennial woman,” von Furstenberg said.“Since being discovered at 13, she has become a major model and a 34-time Vogue cover girl. I’ve worked with her on many campaigns, as I love her personality and the fact that she is her own woman.”

In spite of becoming financially independent at a very young age, Karlie continues to study and improve herself.

“Passionate and fearless, Karlie has also become a full-fledged entrepreneur. As a model, a businesswoman, a young philanthropist and a force on social media, she doesn’t just connect with her generation – she leads it, inspiring young women around the world to become the women they want to be, just as she has done so beautifully.”

Kloss has heroes of her own, of course, and they just happen to be her buddies, like tennis star Serena Williams. “Serena is one of the most extraordinary women on the planet,” Kloss has said.“She challenges the status quo in so many ways, and I learn from her constantly.”

For the most part, though, Kloss’s inspiration seems to come from within, or at least within her family. “There’s been a lot of luck and hard work involved to get me to where I am today, and I’m only just scratching the surface,” she says. “I am the daughter of an emergency-room physician, and I’ve watched my dad work 12-hour night shifts for as long as I can remember. It’s inspired me and is definitely a part of who I am and the way I live.”

And, at just 26, she certainly has plenty of years to keep working hard, and to capitalise on her success.As for the biggest job in the world, InStyle magazine recently put the question to her, and Kloss responded: “Having women in leadership positions is so important. Hopefully it will happen in the White House someday.”So, would she ever consider making a run for president? “Never say never, right?”