Harry Triguboff shares how to build a billion-dollar business Before I met Harry Oskar Triguboff AO, I had a vision of what he might be like. The 86-year-old property developer would be sitting hunched over a thick pile of papers, I thought, meticulously studying every sale and expense line of Meriton, the company he founded and still fully owns and runs as its Managing Director.

Maybe he’d be a little standoffish or impatient; initially irritated by my presence but would eventually warm up, offering insightful and sage advice as only those who’ve lived for eight decades can. I thought he would certainly be wearing a sharp pinstripe suit and sitting behind a large mahogany desk.

This is the part where I am supposed to disappoint you, to tell you that the real Harry Triguboff is nothing like the ‘hard man of property’ persona he’s built up over the years. I’m supposed to tell you that he’s shy or softly spoken, or not nearly as ‘no-nonsense’ as you’d imagine. But I cannot. When I meet Triguboff at his office at Meriton headquarters in Sydney’s CBD, he is sitting behind a giant mahogany desk, poring over a mountain of paperwork. And yes, he’s wearing a pinstripe suit.

“A good leader is someone who believes in what the company does. He must have faith in it – if he doesn’t, it’ll never work,” – Harry Triguboff

As I’m introduced to him by his EA, it takes about five (very long) seconds for him to tear his eyes away from said papers to even acknowledge my presence, let alone shake my extended, and now ever-so-slightly trembling, hand. He greets me without standing and asks that I too take a seat. Well, this is going to be great… 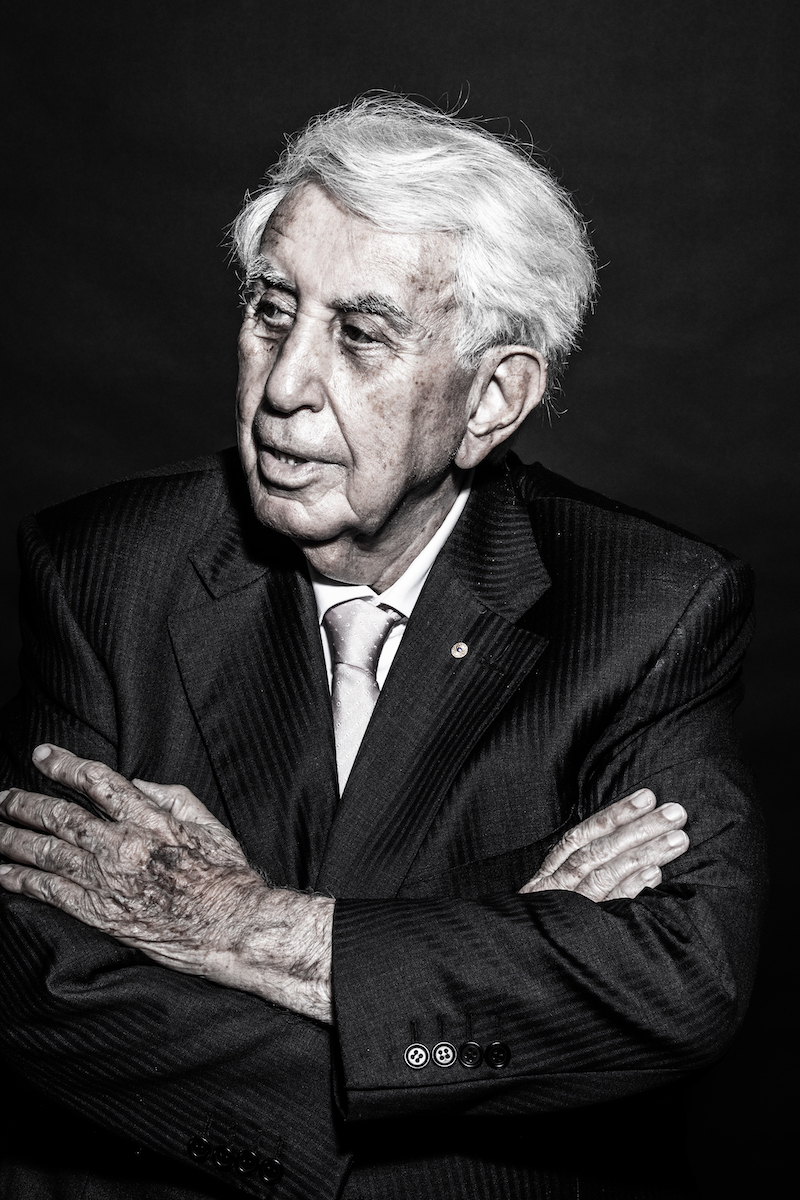 In a few short minutes, thankfully, it is. Triguboff might mean business but there is something also very endearing about him – the way his demeanour rearranges itself when the interview starts; how he looks me straight in the eye, pausing briefly before answering each question, sometimes jotting his thoughts down on a small notepad before revealing his response.

When I ask the man reportedly worth an astonishing A$14 billion to describe his leadership style he says “Perfect, of course,” before chuckling to himself. “A good leader is someone who believes in what the company does. He must have faith in it – if he doesn’t, it’ll never work.”

Belief in Meriton Group, the company he founded in 1963, is something Triguboff has certainly never been short of, and boy has it worked. It is now the country’s largest and most successful residential developer, having built, sold and leased more than 75,000 apartments and some of the tallest resident towers in Sydney, Brisbane and the Gold Coast.

And it’s on the move… Meriton recently announced that it had purchased a development site in Melbourne’s CBD, marking its first venture into the Victorian market 56 years after Triguboff founded his apartment empire.

And to think it all began with some very good advice from a friend: “‘Harry, we should build some flats’, that’s what my good friend said to me one day. So, we built our first block of eight units together. I quickly realised I was doing all the work though – I was small and skinny, and he was big and fat, so everyone thought he was the boss! – but I knew this was what I wanted to do.”

That’s not to say this was always the case. “When I was very young, I wanted to be just like my father – he was my greatest mentor. As I got older, I just did things my way. I studied to be a textile engineer at the University of Leeds in England and once I was qualified, I went to work in South Africa.

How to build a billion-dollar business

Looking back over his career, Harry cites these three determinants of success:

The biggest manufacturer there gave me a job. After a few months, though, I saw the boss and I had to ask him: ‘Why am I working in the commercial section and not the technical side of the business?’ He called an engineer into his office and asked, ‘Who do you think you’re more like, me or him?’ I said, ‘You’. And he replied, ‘That’s why you’re here.’ He saw something in me that I never knew I had. I realised then that it’s very important to understand what people think about you because they can often see you better than you see yourself.”

It was with this newfound self-awareness that Triguboff returned to Australia in 1960, becoming an Australian citizen a year later. With Triguboff often describing Sydney as ‘the best place on Earth’ I ask him what he loves most about it. “I fit in,” he says simply.

“I found something I was good at, and it was here. Of course, I can say it’s beautiful and the climate is good – that’s correct, it has all that. But there are other great places with good climates and wonderful views – Sydney is not unique in that respect. But I found that I fit in here and that is why I like it.”

It’s this matter-of-factness that makes Triguboff so likeable and probably so successful: he says what he means, and he does what he says. Especially when it comes to money. “In 1973, I was quite a big developer… not that big, but quite big. There was Alan Bond, Christopher Skase, others… We borrowed a lot of money from the Americans and then one day the Americans came and said ‘Harry, pay up’. I said, ‘How can I? I have half-finished buildings all over town, I can’t right now but I will definitely repay you.’”

“When you run or own a business and there’s a problem, and there are always many problems, you must be able to fix it. The day you can’t fix it, you’re not the best,” – Harry Triguboff

Triguboff, true to his word, paid them back, little by little, every day. “I sold some units, I paid them back. I sold some more, I paid back some more. The Americans were so impressed, they couldn’t believe it. They were sure that I would never be able to repay and that I would just disappear. I said, ‘I don’t run away.’ It was quite a challenging time but that’s okay. I’m still challenged every day, all the time. The challenge is what makes it.”

It’s being able to deal with these challenges that is the single most important key to success, according to Triguboff. “When you run or own a business – it’s the same thing – and there’s a problem, and there are always many problems, you must be able to fix it. The day you can’t fix it, you’re not the best.”

There’s no doubt Triguboff is still the best, not just because he’s as sharp as a tack and as smart as a whip but because he loves what he does. He continues to work every weekend – “I’m a fanatic for it” – he spends his mornings on job sites and his afternoons in the office. His future plans?

“To keep going the same way. I’m very close to the people that work here – they’re like my family, no different. I’d like to be with them as long as I can, I’d like to be as useful as I can and to work as much as I can. That’s all I want.”

What’s one thing you do every day? “I play billiards every single day. I’m still not very good at it but I enjoy it.”

Do you have a favourite development?

“I love them all. It’s like asking a father which child he prefers. One child might be more beautiful but that doesn’t mean you like them more (laughs). I have love for them all equally.”

What advice would you give your 20-year-old self?

Describe yourself in five words

“I wouldn’t change a thing.”