The 20 most influential global business conferences 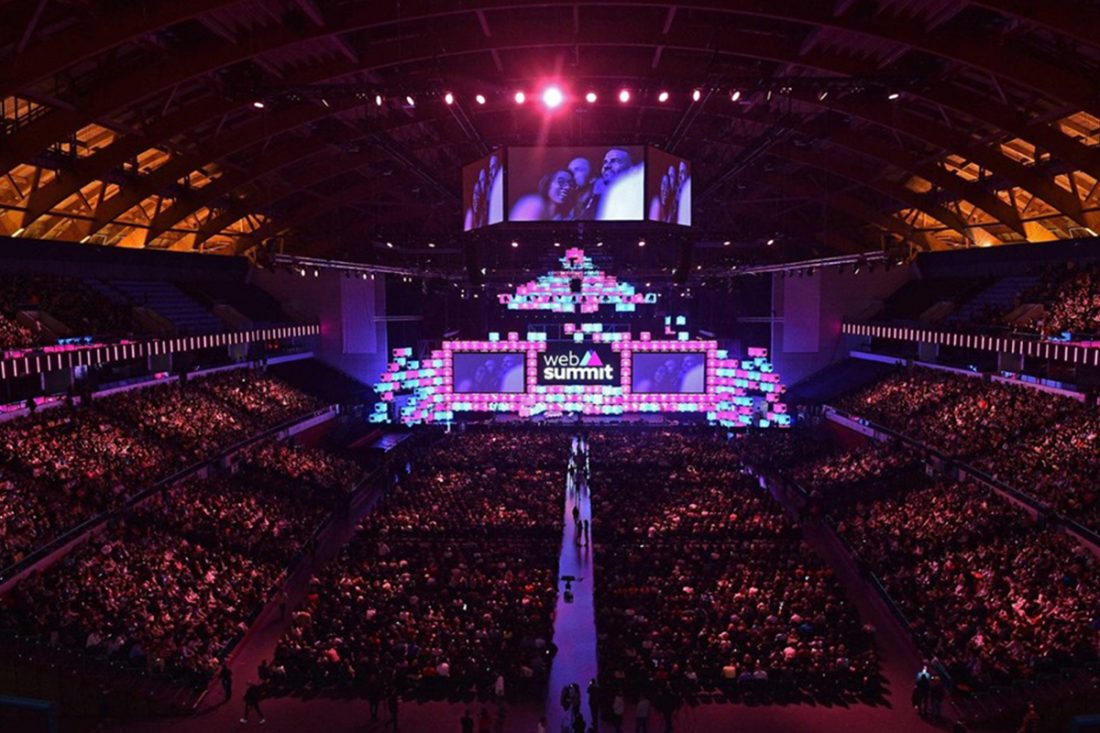 Yes, sometimes, attending a conference can be extremely hard work: walking around aircraft hangar-size halls while clutching plastic bags full of free literature you may never read, with your iPhone on 5%, and only a $35 slice of stale pizza for lunch.

Some events are different, though.

Detailed below are 20 of the most innovative and inspiring conferences on the planet. Many are events that you’d pay to attend for entertainment value even if they weren’t vital to your business.

Frequent flyer cards at the ready as we head to the west coast of America and the south coast of France, with a few stops in between…

Sibos
London, UK, 23–26 September 2019
It started as a banking seminar in 1978 and 40 years later has become the world’s annual conference for the financial industry. The 2018 event was held in Sydney, while the 2019 conference will be held in London. Amusingly, the conference is being held at ExCel; that’s the London conference centre and nothing to do with Microsoft’s famous spreadsheet software that many finance workers would be familiar with. The theme for 2019 is ‘Thriving in a hyper-connected world’, focusing largely on the challenges of finding new business models in times of dynamic digital and political change.
Find out more about Sibos 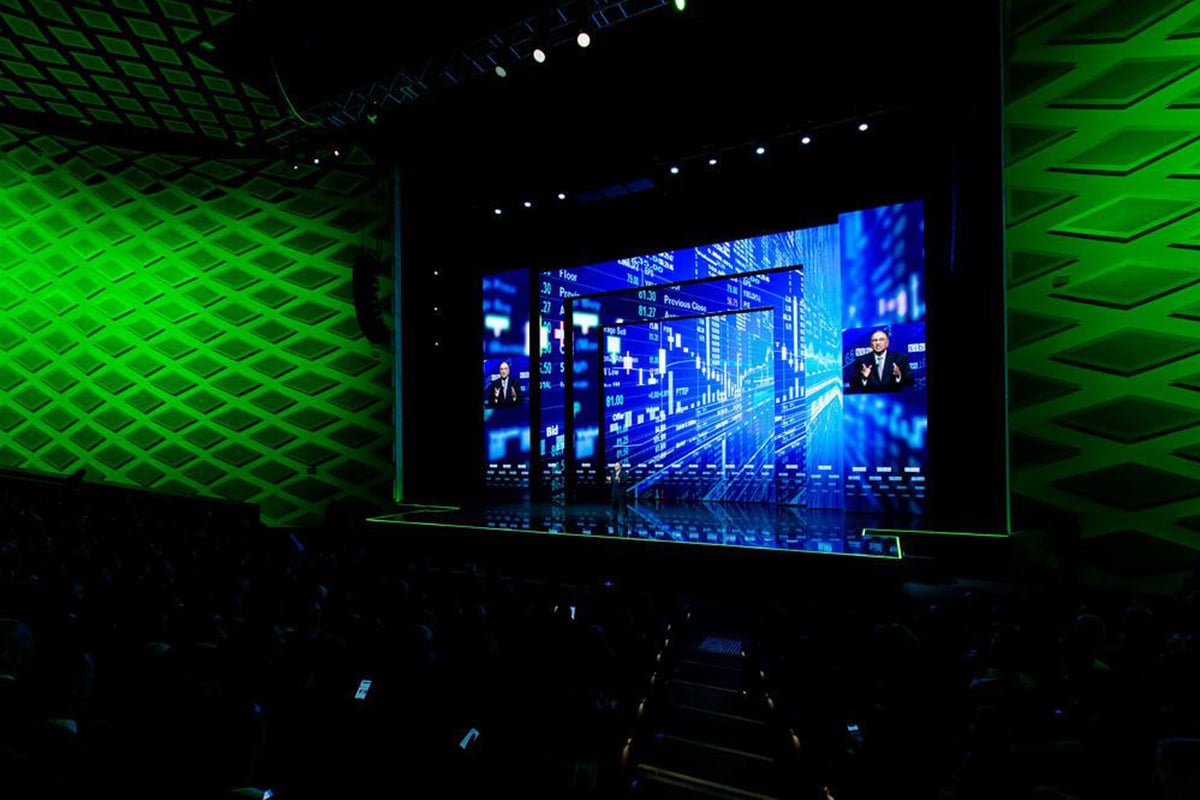 Where events such MIPTV and Edinburgh (see below) focus on talent and those in front of the camera, the IBC is aimed far more at the crew behind the scenes. While the show’s tagline – ‘The World’s Most Influential Media, Entertainment and Technology Show’ – may be hyperbole, there are nevertheless 50,000 media engineers and tech heads who head to the Netherlands capital every year to see how they can refine their on-air presentation and broadcast quality.

Find out more about IBC 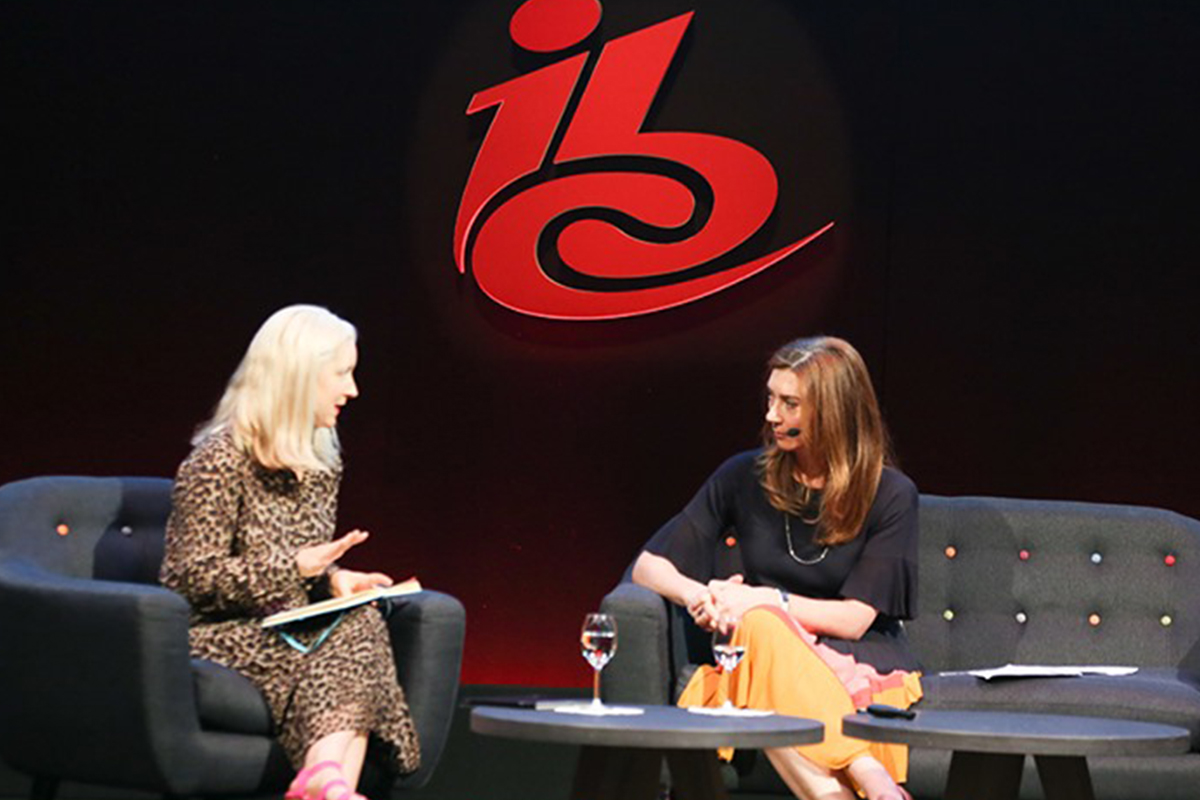 IT Business and Management conference

Oracle OpenWorld
San Francisco, US, 16–19 September 2019
At first glance, conferences based around a financial and database software package might not sound like a showstopper, even allowing for John Mayer closing the event with a concert in San Fran. But the speaker line-up includes an interesting mix of science and business thought leaders, and even ex-chiefs of the CIA and British Secret Intelligence Service. All areas of business are covered, with a focus on how to leverage digital technologies and the cloud for business success. And, because Oracle sponsors Oracle Park, home to the San Francisco Giants baseball team, there are spin-off night events at this beautiful stadium.
Find out more about Oracle OpenWorld 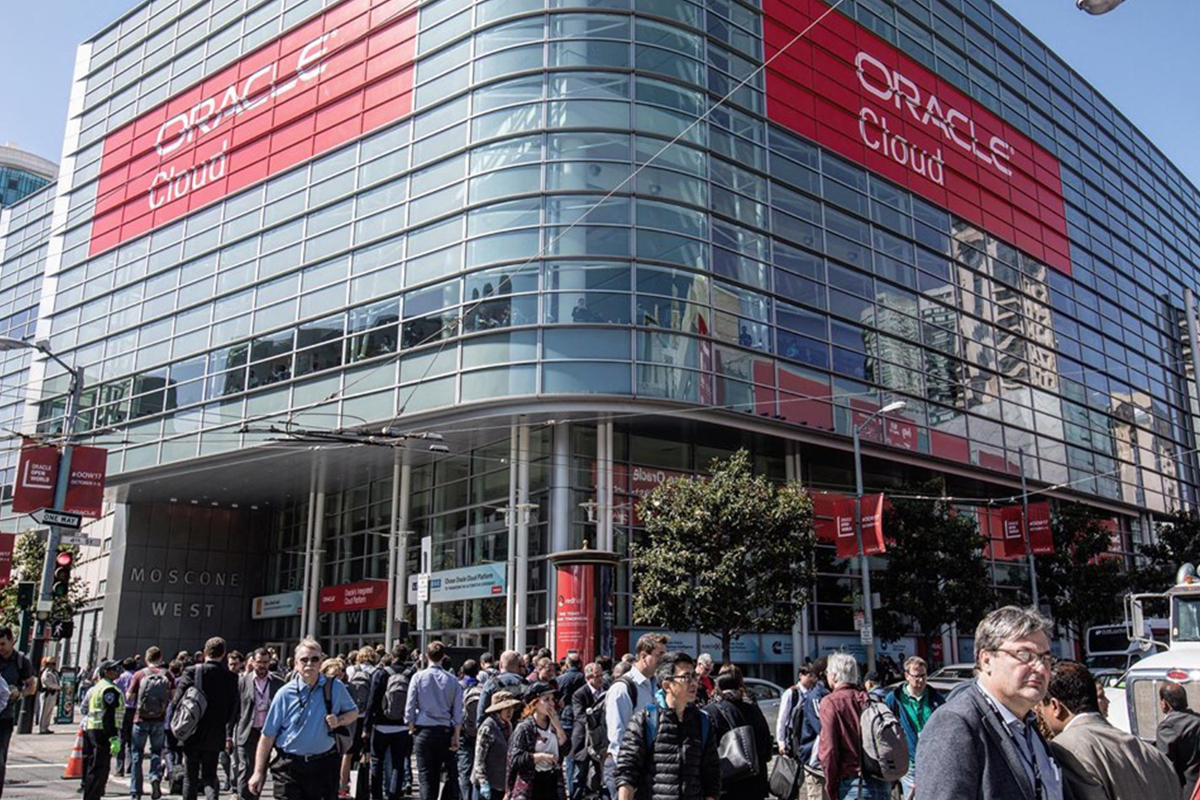 India Mobile Congress
New Delhi, India, 14–16 October 2019
This year will only be IMC’s third conference, but it’s proven to be an interesting event on many levels – not least because it is partly organised by the Indian government. As a result, there are policy decision makers and regulators playing a prominent role alongside businesses and entrepreneurs. The role of 5G in the future was the main topic in 2018, in what is more of a forum-based conference than anything else. The multicultural backdrop of New Delhi also makes a welcome change from Vegas and Cannes.
Find out more about India Mobile Congress

CEBIT Australia
Sydney, Australia, 29–31 October 2019
Australia’s biggest technology and business conference is useful whether you work in IT, marketing, sales, HR or finance. Expect this year’s conference to go big on data and privacy, transformation and disruption, emerging technologies and driving business growth through digital means. Speakers are from a broad mix of media, business, academia and tech, including 2018 Australian of the Year Professor Michelle Simmons and Stephen Attenborough, Commercial Director of Branson’s spaceline Virgin Galactic.
Find out more about CEBIT Australia

Canton Fair
Canton, China, 15 October to 4 November 2019
There are a number of conferences here, some of which feel like pop-up events when you consider that the China Import and Export Fair has been running for 62 years – the first was held in Canton in 1957. Over a million square metres, 25,000 exhibitors vary from vehicle spare parts, to food, shoes and medical devices. The emphasis is very much on export rather than import and suppliers from around the world get to see what they can buy in bulk at great prices.
Find out more about Canton Fair

Originally held in Dublin, Web Summit is in its 11th year, and many see it as the most important tech event in the world. Venture capitalists are always in attendance, looking for the latest emerging technologies and internet innovations. Al Gore and Stephen Hawking have been among the speakers at the event. The organisers are also the driving force behind Collision in Toronto and Rise in Hong Kong (see both below), and this was their original conference. This year’s diverse line-up of speakers includes the CEOs of eBay and Tinder, professional boxer turned Founder Wladimir Klitschko and the Presidents of Croatia and Ghana.
Find out more about Web Summit

CES
Las Vegas, US, 7–10 January 2020
Pocket radios were the hottest new tech on display at the first Consumer Electronics Show held in 1967 in New York. The first ever VCR was unveiled in the 1970s. For much of the ’80s and ’90s it was held twice a year with summer and winter shows, and an experiment to invite the general public was tried and then quickly abandoned in 1993. Bill Gates has been the keynote speaker a dozen times and, at this year’s show, robots, AI and driverless cars were the main talking points. Whatever you’ll be buying in 2025, a version will be here in 2020.
Find out more about CES 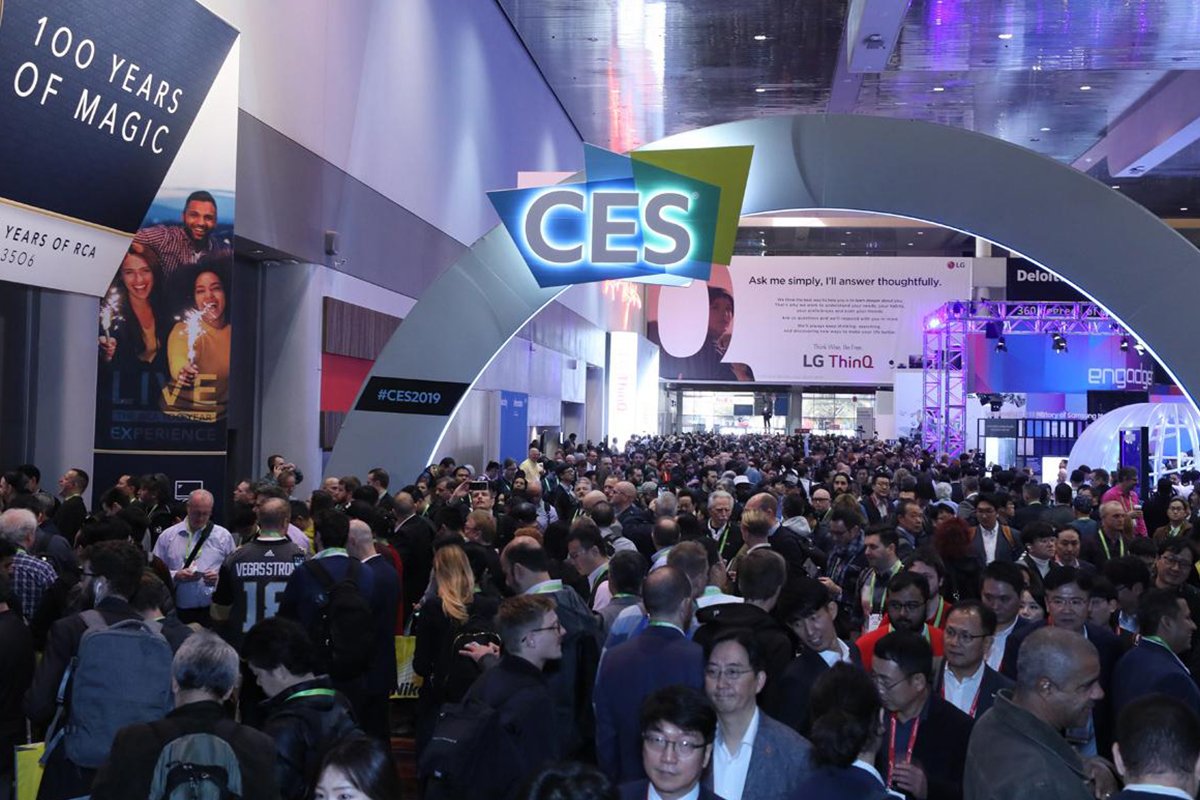 Mobile World Congress
Barcelona, Spain, 24–27 February 2020
The world’s largest event for mobile technology sees over 100,000 executives descend on Barcelona, with the potential of meeting more than 2,000 exhibitors across 120,000 square metres of event floorspace. Topics to be discussed in depth include 5G, AI, security and privacy, sustainability and the planet, and customer engagement – intelligent connectivity being the umbrella theme throughout. Partner events for MWG also take place in Shanghai and LA.
Find out more about Mobile World Congress

SXSW
Austin, US, 13–22 March 2020
Started as a music festival in the late 1980s with around 700 attendees, by 2014 there were 32,000 attending the music part alone, with some 2,000 acts appearing. John Mayer was signed to a record deal shortly after his performance at the event in 2000. In 1994, the film component was added and today the event is very much a showcase of the cutting edge of entertainment, politics and culture. Expect to hear speakers as varied as Bernie Sanders, Elon Musk and Steven Spielberg; and also attend exhibitions, concerts, screenings and premieres.
Find out more about SXSW

MIPIM
Cannes, France, 10–13 March 2020
Architects, investors and the world’s leading players in the property market come together for networking and information sharing. The event covers anything from property development to industrial logistics, and includes residential, retail, office and even sports stadiums. A must for real estate professionals, it’s also a prime opportunity for people with development projects to get in front of investors. As conferences go, this is a hot property…
Find out more about MIPIM

MIPTV
Cannes, France, 30 March to 2 April 2020
Over 3,400 companies descend on the South of France for four days and share their ideas for future television program, films and digital entertainment; or try and sell their finished shows to network programmers and commissioners around the world. The event has been running since the 1960s when only 120 companies attended from a mere 19 countries. Today there are more than 100 nations showing their work. Keynote speakers tend to be the CEOs of the big European networks and it’s a great week for spotting viewing trends of the future. Set for a revamp in 2020 due to streaming services and the changing face of the TV industry.
Find out more about MIPTV

NAB Show
Las Vegas, US, 18–22 April 2020
Connect with the next generation of storytellers in an environment where 90,000 decision-makers are ready to get their chequebooks out (okay, action an electronic funds transfer). Rather like IBC in Europe, NAB is very much about the broadcasting aspects of television, rather than the creatives; expect there to be as many engineers as there are scriptwriters. Even so, Alan Alda was guest speaker in 2019 and Chris Rock has been a previous guest.
Find out more about NAB

IT and business innovation conference

A few months before Oracle takes over San Fran, IBM owns the city for a few days with another conference based around business and technology. Yes, in some ways it’s more of the same: AI, blockchain, and cutting edge, disruptive, emerging technologies; but IBM does it very well and this is a must-attend for executives. Inspiring stories from a diverse range of speakers and some great exhibitions. CEO Ginni Rometty is a hugely impressive leader and her keynote speech alone makes it worth attending.
Find out more about IBM Think 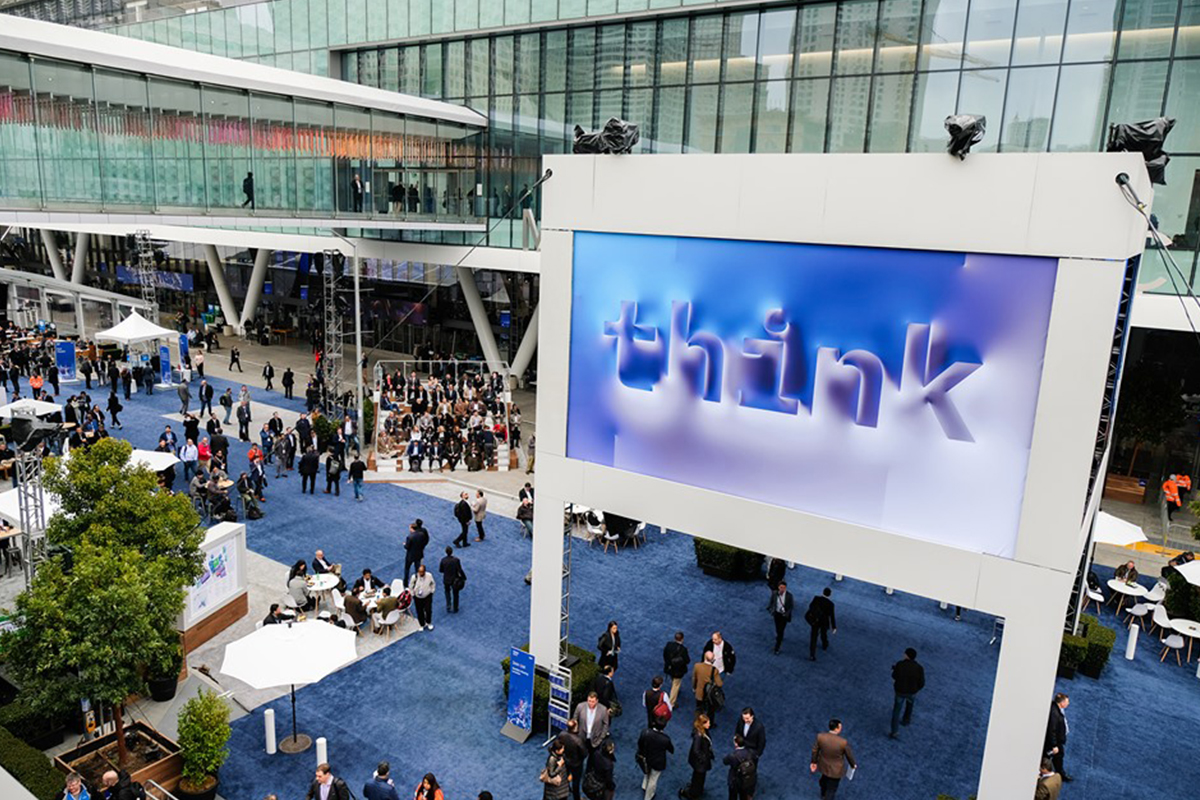 Seth Rogen and Justin Trudeau were among the speakers at this year’s Collision. Only five years old, the event is perfect for entrepreneurs and investors to come together in a creative environment. North America’s fastest-growing tech event, it already has 25,000 attendees. After starting in Las Vegas, then New Orleans, it is now in the natural habitat of one of the world’s burgeoning tech hubs. Collision street parties even overtake some of Toronto’s neighbourhoods at night.
Find out more about Collision 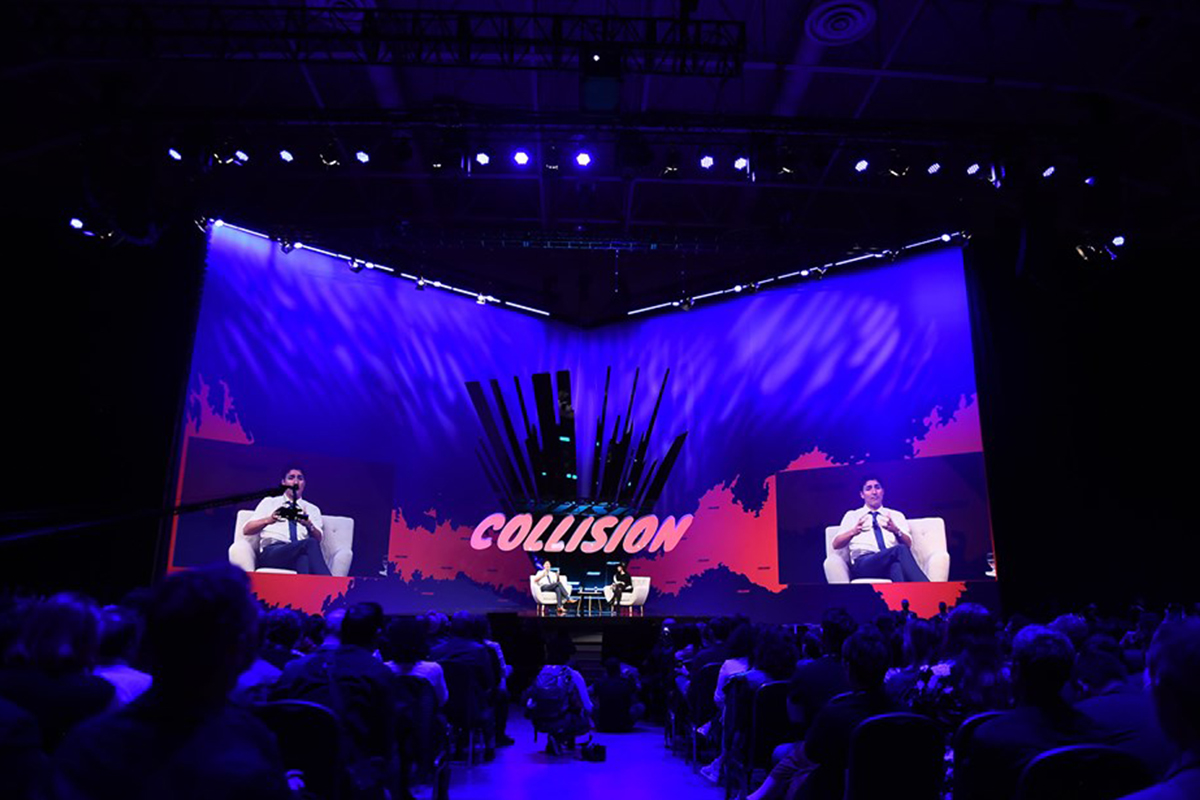 A relatively new, brief and still small-ish tech event, this conference is particularly useful for Europe’s tech start-ups to meet potential investors. It takes place on a Thursday and Friday in 2020; so fly in Wednesday night, have a couple of days listening to keynote speakers discuss AI and blockchain technology, then relax over the weekend in the Netherlands capital known for canals, cycling and creativity.
Find out more about TNW 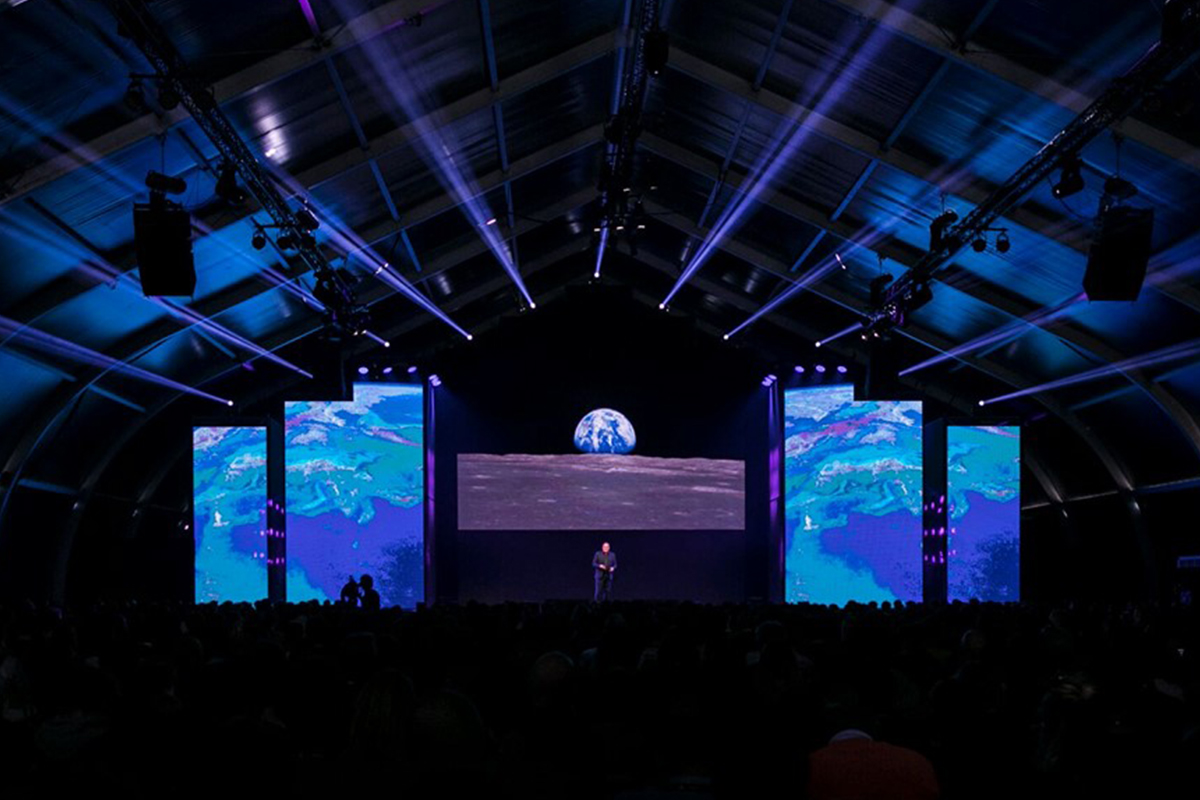 The Electronic Entertainment Expo, E3 is a trade event for designers, developers and distributors of video games. Retailers and the media get to see what gamers will be playing in the coming years. The 2020 expo will be the 25th anniversary of an event born in the mid-1990s during the PlayStation revolution. Sony and Nintendo have been regulars, showcasing their latest hardware, while developers such as EA and Ubisoft show off their latest games on all platforms. Perfect for big kids; a conference where it often feels difficult to see where business ends and pleasure begins.
Find out more about E3 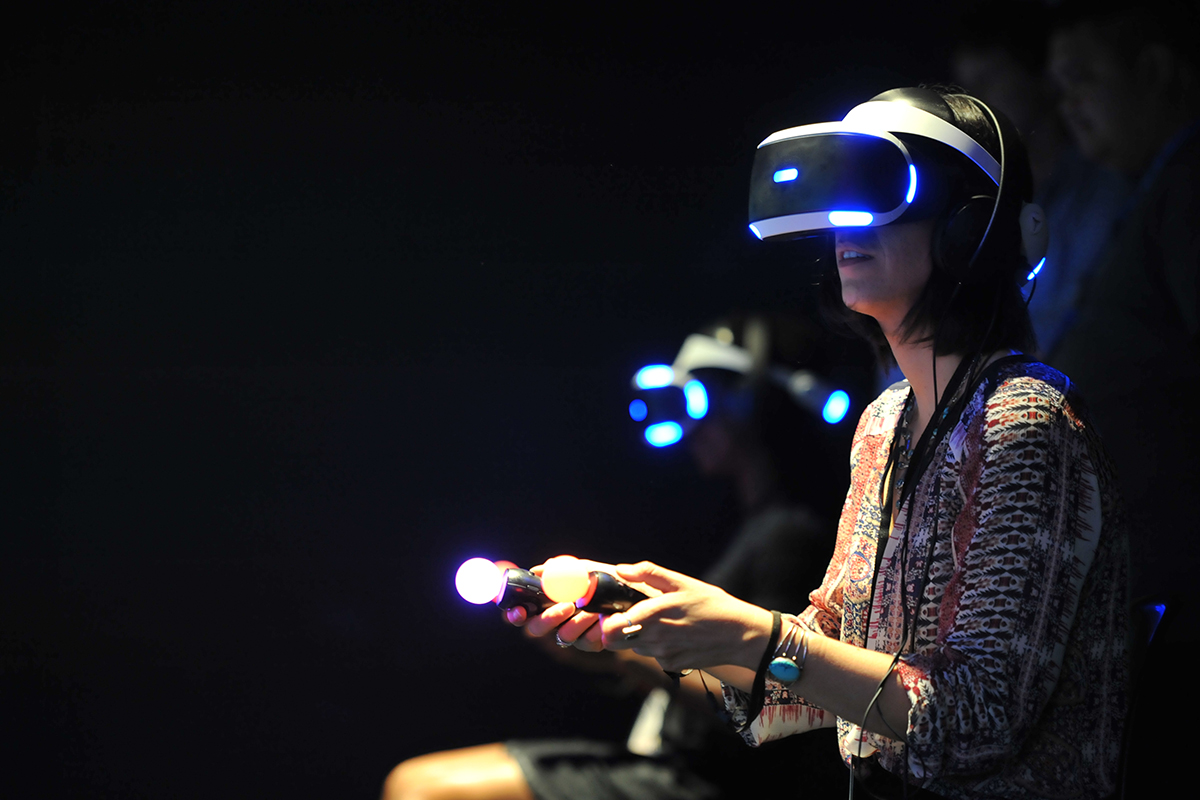 Formerly known as the International Advertising Festival, of course they rebranded themselves! Largely this is five days of awards, with the marketing, communications and advertising industry recognising the most creative pieces their industry has produced in the previous year. Initially, the event started in the 1950s was the cinema advertising execs’ response to the Cannes Film Festival, which started in the 1940s. Seminars were added in the ’90s to break up the awards-fest and speakers have included Arianna Huffington and Annie Leibovitz.
Find out more about Cannes Lions 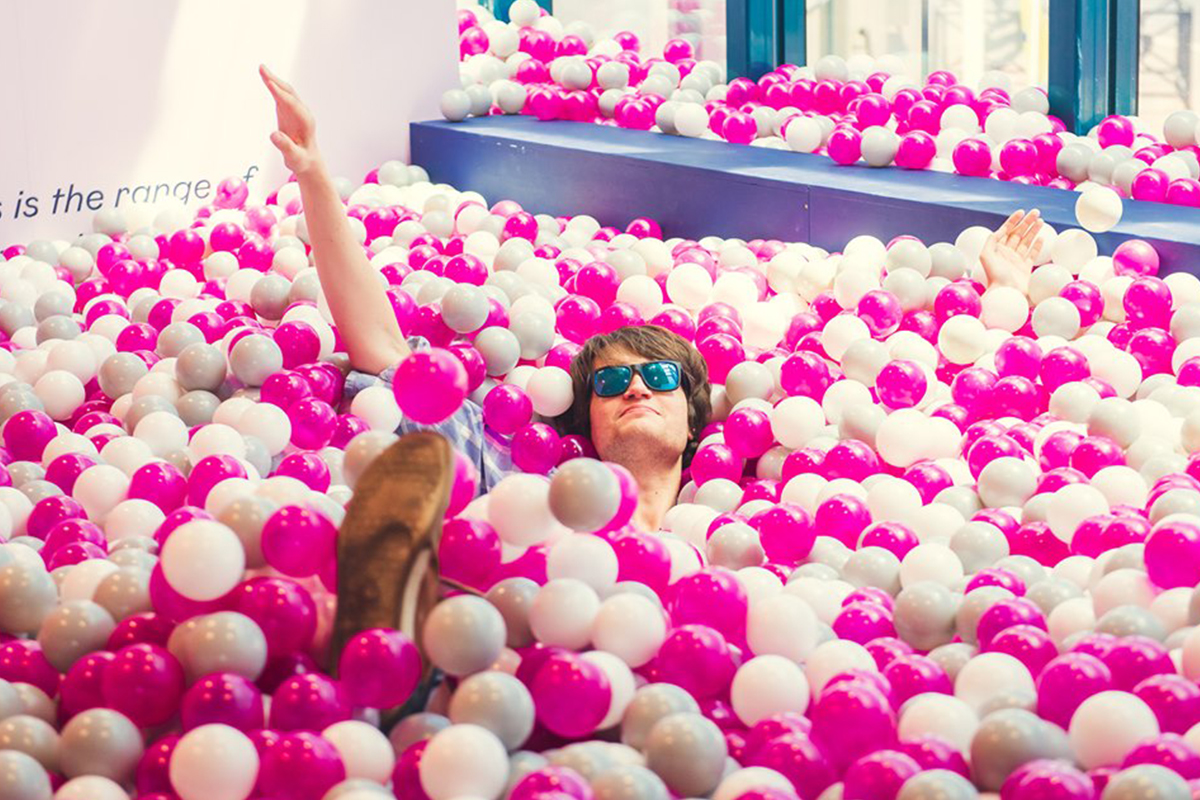 Web Summit completed its triumvirate of tech conferences with Rise in 2015. After successful events in Europe and North America, it was the logical next step to corner the market in Asia. An event in India would seem the only untapped area of potential. Rather like Collision, the emphasis is on start-ups and growth. There is even an award for Asia’s best start-up. Rise also offers Night Summit, allowing you to mix business with pleasure as you get to see Hong Kong’s night-life and network at the same time.
Find out more about Rise 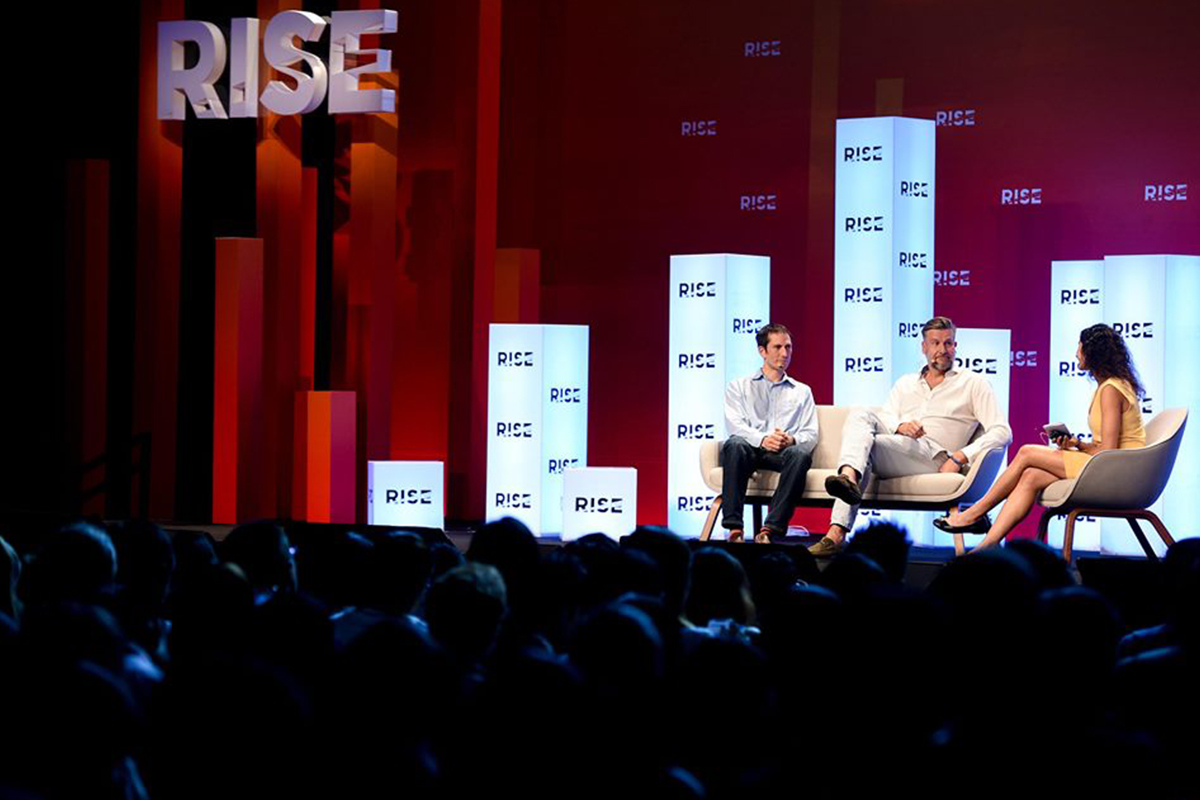 Edinburgh TV Festival
Edinburgh, August 2020
There may only be 2,000 or so attendees in the Scottish summer sunshine, but this is where the real business end of TV is discussed by heavy hitters. Ted Turner and the Murdochs have been attendees, as has Vince Gilligan (Breaking Bad), Al Gore and the likes of Simon Cowell, Ricky Gervais and Jamie Oliver. The James MacTaggart Lecture is a key feature (Kevin Spacey and Dennis Potter have been previous speakers) and, although somewhat UK-centric, expect the likes of HBO, NBC, Showtime, Amazon and Netflix to all be present.
Find out more about Edinburgh TV Festival