Bitcoin billionaires, or how the Winklevoss twins got revenge on Zuckerberg

Known via The Social Network as the brothers beaten to the Facebook punch by Mark Zuckerberg, the Winklevoss twins became billionaires – and got revenge. 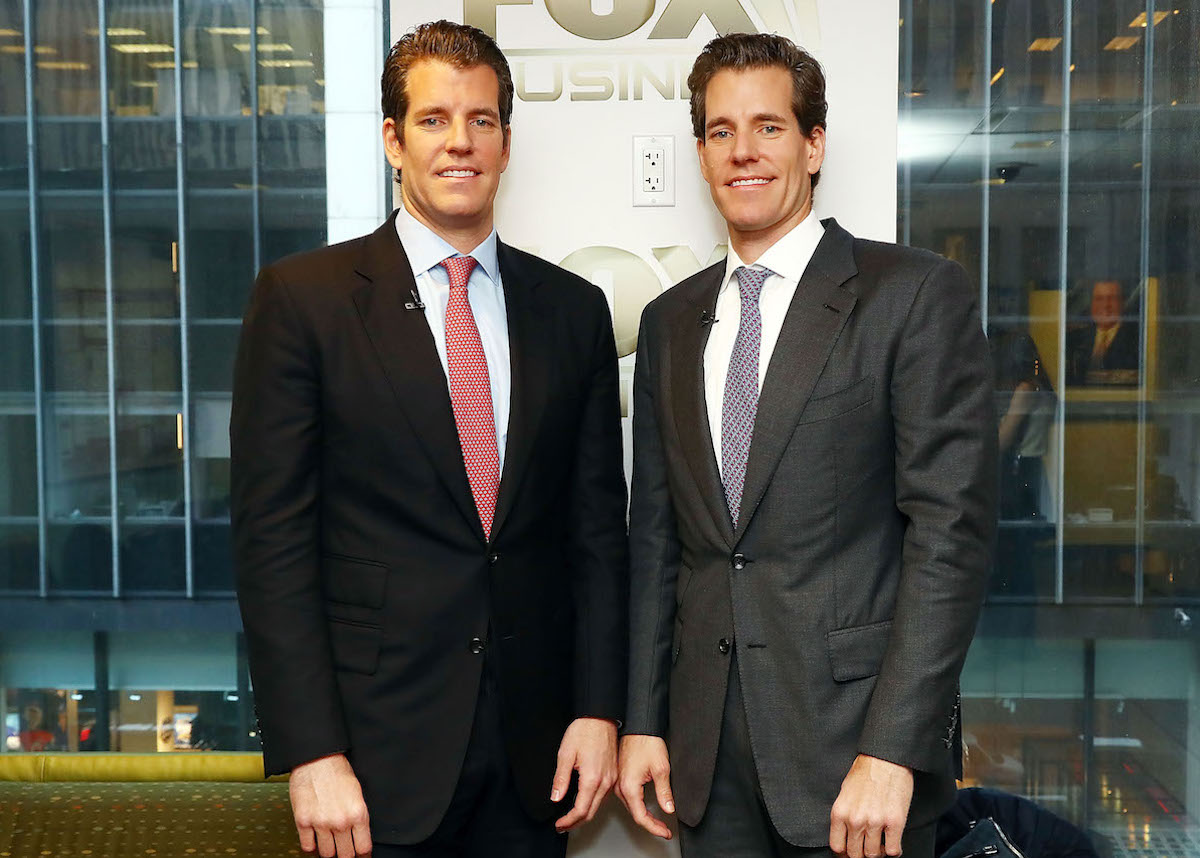 It is an unforgettable scene – and not just because the same actor, Armie Hammer, plays two different, yet identical, characters at once, thanks to a little Hollywood magic.

Teutonic twins, Cameron and Tyler Winklevoss, Harvard students and Olympic oarsmen, stride confidently into the wood-panelled office of the president of the college, Larry Summers, to complain that a fellow undergraduate, Mark Zuckerberg, has stolen their idea for what went on to become Facebook.

But Summers, former US Treasury Secretary, is not a man to suffer fools. Concluding their complaint has nothing to with him and discovering that the pair got their rare appointment with him through nepotism, he dismisses them as jumped-up jocks who “from the looks of it want to sell me a Brooks Bros franchise”.

As the twins try to make their case, Summers asks his assistant, Anne, to “punch me in the face”, before showing them the door. Tyler is so angry he closes the door hard as they are bundled back out into the quad and the doorknob comes off in his hand.

The now 37-year-olds might have remained punchlines of Silicon Valley but their next big idea – if you believe Facebook was their first – has turned out to be their redemption and their fortune.

The US$65 million they agreed to accept to settle their dispute with Zuckerberg in 2008 eventually came to be worth US$500 million – two-thirds of the settlement was in Facebook stock and it has skyrocketed over the past decade.

They used their pot of gold to invest heavily in bitcoin. It was risky. It almost bankrupted them multiple times. But in the end, it came spectacularly good. They are now billionaires, not as many times over as ‘Zuck’ but rich enough to earn the new economy bragging rights they have long craved.

The story of their unlikely comeback is told in a new book Bitcoin Billionaires by Ben Mezrich. If you think Mezrich sounds like an unlikely chronicler of ‘the Winklevii’, you’d be right. He also wrote The Accidental Billionaires, the book on which the film The Social Network was based.

In other words, he’s the person most responsible for the Winklevii’s reputation as arrogant losers. Part of the reason he has written the new book, he says, is to correct the record. “I misjudged them. I would have loved to have been able to tell their story more fully,” he says.

Mezrich describes how the Winklevii first heard of Bitcoin at a club in Ibiza in 2012 when they were enjoying their Facebook payout. They returned to New York and struck a deal to buy a start-up called BitInstant that enables speculators to buy the cryptocurrency easily and safely. After that, they snapped up an estimated 1% of all bitcoin in circulation for a total of US$11 million.

That initial investment reads like the first scene of the movie Bitcoin Billionaires will – like its predecessor – become; Sony has already bought distribution rights.

The Winklevii use ‘hot’ (internet-connected) and ‘cold’ (never-connected) laptops to buy their stash of the digital currency securely. They then destroy the laptops with sledgehammers and erase all digital copies of the long alphanumeric code that is the digital key to their holdings in favour of printing it out on pieces of paper. 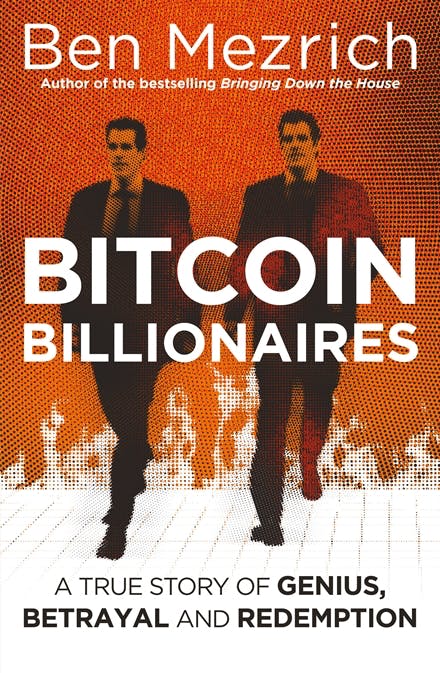 They cut up the printouts into several parts and fly all over the US, stashing the parts in separate safe deposit boxes around the country. To steal the code, a thief would have to break into the correct safe deposit box, in the right branch of different banks. Paranoid? The Winklevii?

After they amass their stash, the pair become evangelists for the new money. They spend untold hours trying to convince bankers and financiers that bitcoin is a serious investment opportunity, not some libertarian-cum-anarchist fantasy. But it looks like they will be humiliated again. Wall Street rejects bitcoin.

Warren Buffett calls it “rat poison squared”. BitInstant’s founder, Charlie Shrem, goes off the rails, becoming rather too fond of nightclubs and models. Later he is sentenced to two years in prison for aiding an unlicensed money-transmitting business.

The bitcoin price yo-yoes frantically, spiking during the Eurozone crisis then falling back. The main bitcoin exchange, Mt Gox, collapses after hackers steal US$450 million.

US prosecutors shut down Silk Road, an online black market best known as a platform for selling illegal drugs where bitcoin is the currency of choice.

But by late 2017 investors were, at last, starting to take the cryptocurrency seriously, sending the price of a bitcoin surging past US$10,000. That made the twins’ combined initial investment worth US$2 billion, making them the billionaires of the title of Mezrich’s book. (It is now trading at around US$8,000, but still.)

As he chronicles their adventures in cryptocurrency, Mezrich also finds space to update the twins’ dispute with Zuckerberg. He reveals that one reason Zuckerberg was initially reluctant to meet them to settle their claim that he’d pinched their idea was “security concerns”.

He feared the twins would beat him up during mediation in a lawyers’ office. “‘You want to handcuff us to the watercooler?’ Cameron asked,” Mezrich writes. The Winklevii’s lawyer responds: “That won’t be necessary. There’s a glass conference room at the end of the hall. Just one of you will go in for the face-to-face. The rest of us will sit outside and watch.”

And that’s what happens. Cameron Winklevoss and Zuckerberg exchange awkward pleasantries and forced compliments and eventually – Cameron thinks – agree to settle. As he leaves, Zuckerberg’s lawyer, Neel Chatterjee, asks him how the meeting went. “Good,” the boy wonder replies. “Good as in…?” Chatterjee asks. “Good as in I’m going to f*** them in the ear.” To him, US$65 million was a pittance.

It’s tempting to think that the publication of Bitcoin Billionaires marks the end of the Zuckerberg vs the Winkelvii drama. A score draw. But there might be an extra chapter – even another book for Mezrich.

Facebook is building a cryptocurrency that it hopes will allow its two billion users worldwide to send money to each other – most likely through WhatsApp, which it owns. “I believe it should be as easy to send money to someone as it is to send a photo,” Zuckerberg likes to say.

Facebook has discussed whether it might partner with the Winklevoss brothers’ own digital currency exchange, Gemini, to create the new service. Will the old enemies become peers in a new era where money is just bits and bytes? Or will Zuckerberg outflank the twins once again?