Will the billionaire space race lead to technologies that help humanity, or be its detriment?

In the past, innovations which arose directly from space exploration ended up changing our daily lives on Earth for the better.

Beloved children’s author and illustrator Michael Foreman penned his classic picture book Dinosaurs and All That Rubbish in 1972. The book opens with the image of a man in a bowler hat and seersucker suit entranced by the beauty of a far-flung star twinkling in the night sky. “I have money,” he muses, eyeing the heavens. “I have many men working for me.” And so, summoning all his will and resources, he sets about attaining his goal. “Build me a rocket!” he demands. “Cut down the trees, dig out the coal. Burn whatever will burn, and build me a rocket to reach the stars!”

Alas, by the time the rocket is ready, there are only mountains of waste and a ravaged landscape left from which to launch it. Undeterred, the man takes off and reaches his destination. But once he lands and explores the planet, he realises there is nothing to see – not a tree, not a flower, not a blade of grass, just barren rock and a thin, lifeless atmosphere.

“Countless op-eds have already held forth on this very subject, condemning the foray into space tourism as utterly tone-deaf given the current climate emergency the planet is facing.”

Disappointed, the man jumps back in his rocket and heads off towards another distant exoplanet, scintillating in the darkness. When he arrives this time, he is elated to discover a lush, verdant paradise bustling with glorious flora and fauna. The twist to Foreman’s story is that the second planet is, in fact, Earth, and the man had inadvertently returned home. During his long absence, the environment was able to repair itself. A stern brontosaurus promptly warns him that if he would like to stay, he had better be prepared to look after the Earth and be conscious of all that he destroyed before.

Foreman’s simple allegory has become scarily prescient. Recent critiques of the private space industry are well-founded, particularly charges pertaining to competing egos, squandered resources and carbon burned. While humanity’s long-nurtured dream of colonising the stars is admirable, the fact remains no matter what type of ethical yardstick one cares to apply, it is hard to justify either the resources being squandered or the emissions being generated in order to realise it.

Moreover, unlike the former parable, even if we could allow the Earth to lie fallow for a few generations (it remains unclear what happens to the billions of souls who shall never be granted a seat on Elon Musk’s Starship or Jeff Bezos’s hypothetical Orbital Reef), nothing will magically restore the millions of species already driven to extinction much less help our planet’s atmosphere to return to its fragile balance. 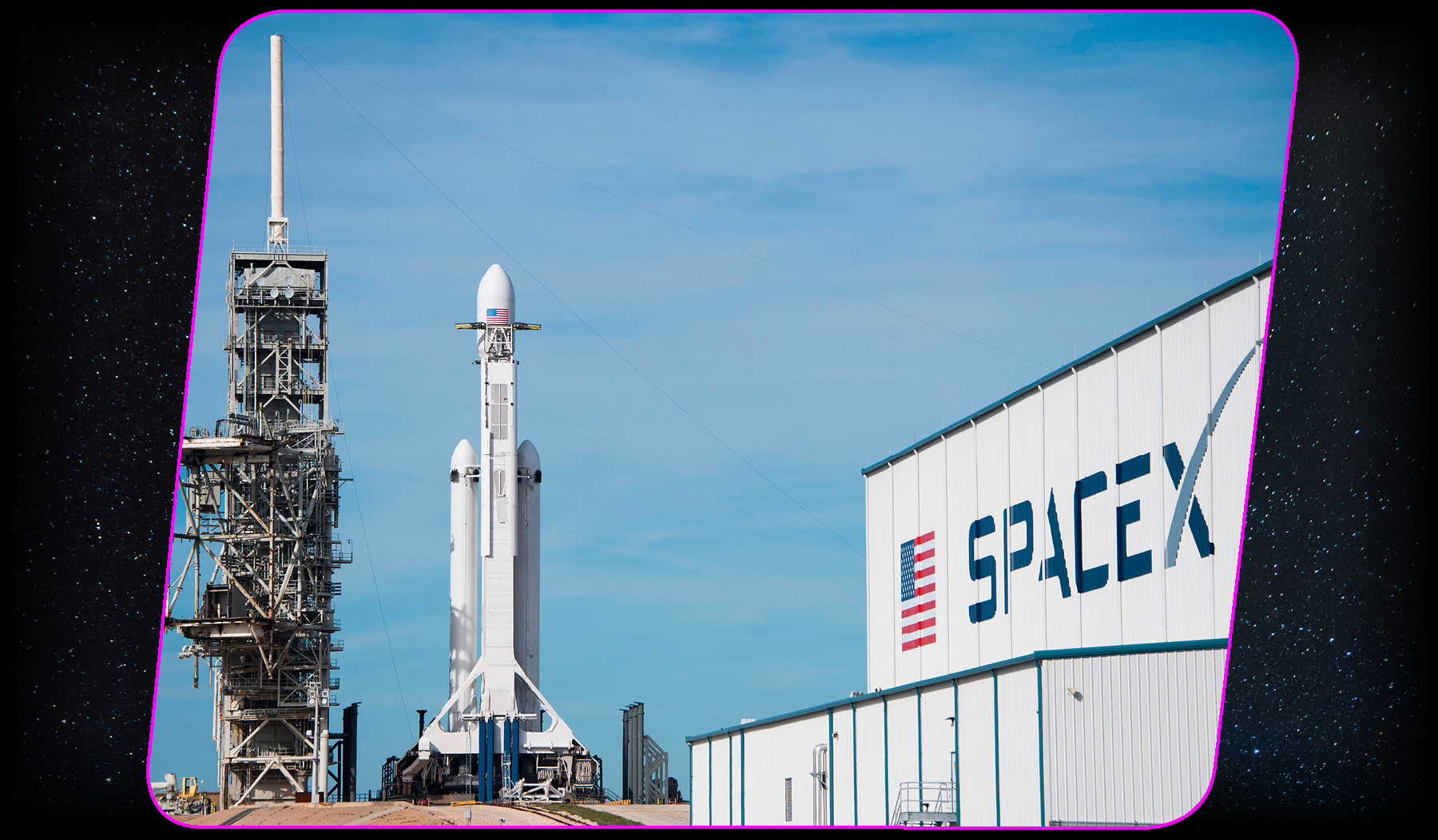 With all this in mind, how should we feel about the so-called ‘billionaire space race’? Is it really all bad? Or is it possible that some great good may yet emerge out of it – not only for SpaceX or Blue Origin shareholders, of course, or the burgeoning space tourism industry and its cottage industry of new supporting startups, but humanity at large? Or even the Earth itself? In thinking about it, it’s easy to feel conflicted – do we look up in hope and awe, or do we give in to despair? Either position seems understandable.

An optimist cannot help but marvel at the array of technological wizardry being brought to bear right now – from SpaceX’s game-changing re-usable Falcon rocket systems; to NASA’s exploration of Mars via the Perseverance rover and Ingenuity drone; to newly emerging players such as STOKE Space Technologies and Varda Space Industries, and their growing talent pool of astrophysicists; to the inflatable space stations of Bigelow Aerospace; to the spectacular engineering feat of the new James Webb Space Telescope.

Certainly, the latter will tell us more about our place in the universe than any amount of astronomy has ever done before and could answer questions that humanity has pondered ever since we first huddled around camp fires 300,000 years ago and gazed up at the constellations. Surely, despite everything that is wrong with the world, how can we not be spellbound by these shining examples of human ingenuity?

And yet the pessimist is right to feel dismayed by the reckless hubris involved in the likes of Sir Richard Branson strapping himself into Virgin Galactic’s Unity 22 for a 20-minute suborbital joy flight in order to beat Amazon’s Bezos by nine days. To be fair, Branson got there first but did not technically breach true space, whereas Bezos’s New Shepard went significantly higher, crossing the threshold of the Karman Line. Regardless of who won what, one might well ask what actual purpose either short-lived jaunt served other than as a very expensive phallic symbol-measuring contest between a couple of oligarchs with literal money to burn.

“Whether they are pursuing their dreams to colonise space out of ego, greed or a genuine altruistic ambition to help pioneer the proliferation of the human race beyond the stars, we do know this: technological breakthroughs will inevitably arise as a result of their stubborn insistence to write their names in the sky.”

Unsurprisingly, countless op-eds have already held forth on this very subject, condemning the foray into space tourism as utterly tone-deaf given the current climate emergency the planet is facing. Each individual flight burned more than 270 tonnes of CO2 and left clouds of poisonous chemicals in their wake to remain in the atmosphere indefinitely.

For the same reasons, environmentalists see Musk’s dream of dispatching a colony to the Red Planet as further folly. They quite rightly say we must get our own house in order first – both environmentally and economically. That there can be no exponential growth within a closed system (that is, Earth), and the idea that technology can decouple us from this truth is a dangerous pipedream. That we stand at the precipice of a full-title climate disaster, and there is no Planet B.

So then, which is it to be? The starry-eyed believer in the power of science to see humanity settle the stars? Or the scarecrow prophet insisting we are all doomed lest we abandon such heady dreams before our own world descends into a living nightmare? 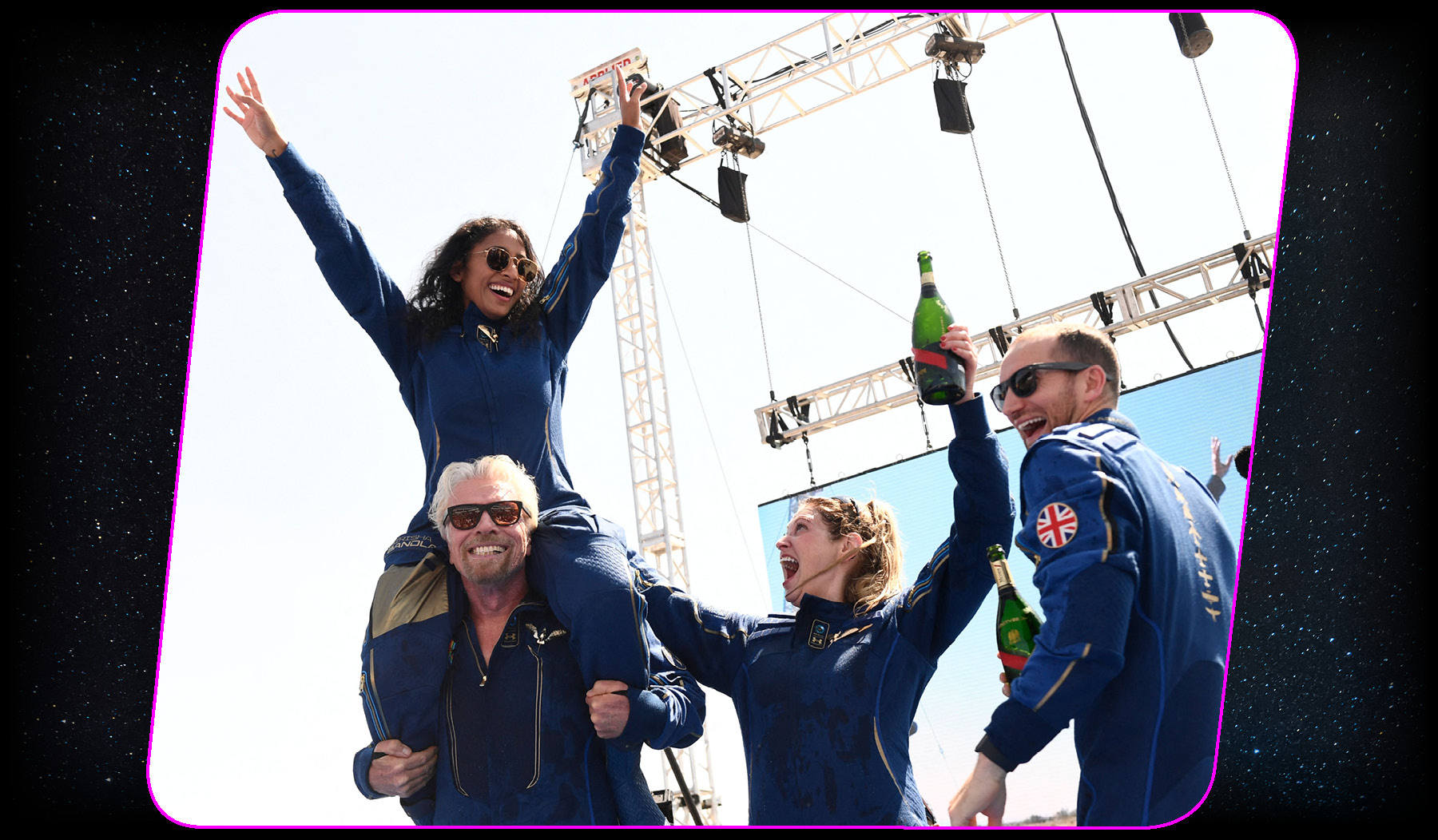 Well, at the risk of sounding fatalistic, perhaps we should accept that nothing we do or say is likely to influence the decisions of any of these billionaires anyway. Even if they do read the plethora of articles that critique their celestial endeavours or black hole-size egos, Musk, Bezos and Branson are undoubtedly long inured to the judgements of others.

As it is, the likes of SpaceX and Blue Origin have already paved the way, building infrastructure that other entrepreneurs are now building upon. Similar to the dotcom explosion of the 90s, canny investors are taking note with US$15 billion in venture capital pouring into the fledgling space economy during 2021 alone.

“Is it possible that some great good may yet emerge out of it – not only for SpaceX or Blue Origin shareholders, of course, or the burgeoning space tourism industry and its cottage industry of new supporting startups, but humanity at large?”

And of course, why shouldn’t humanity still shoot for the stars? There is a very good argument to be made that unless we nurture this higher calling and seek to travel beyond the confines of our small blue planet (and indeed, think beyond our own short lives), that unless we reward the kind of scientific discoveries which can bring this dream to fruition, then we will only slide further back into atavism and ignorance. And surely there is enough of both in the world?

By way of reasoning, consider some of the inventions that have already arisen out of our quest to conquer space. Yes, NASA put a man on the moon, but it is equally as famous for developing a raft of technologies that not only provided real-world utility but in many cases have been life-saving. For instance, inventions such as the ventricular assist (heart pump), artificial limbs and the Cochlear implant arose directly out of NASA’s research. Similarly, the development of anti-icing systems has vastly improved commercial aircraft safety. So too, innovation in the design of radial tyres is now applied across the automotive industry.

Written in the stars? 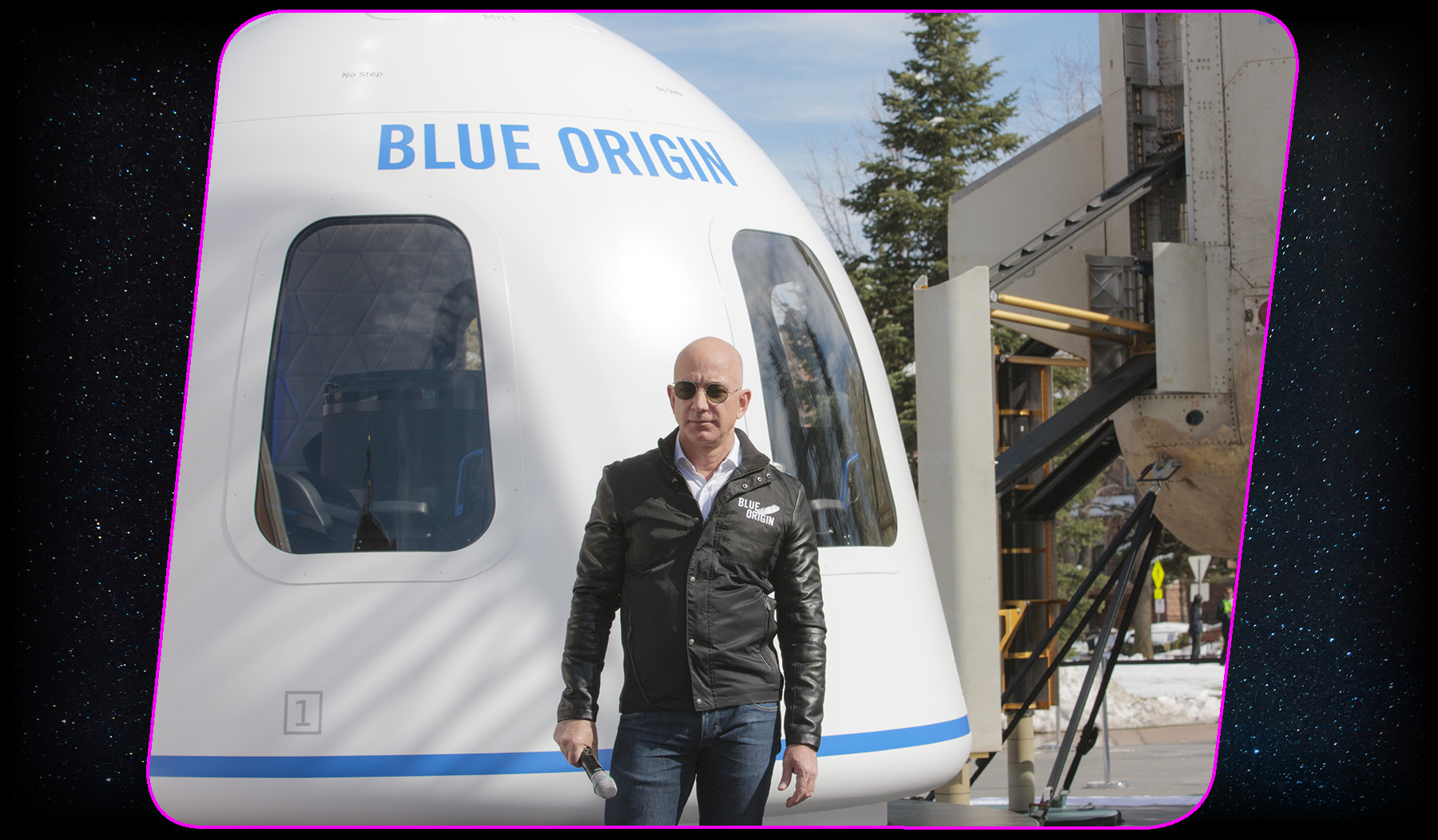 Other NASA-led initiatives have led to advancements in fire-fighting equipment, a way to safely disable landmines, and the use of high-rise shock absorbers for buildings located in earthquake-prone areas. Add to that a long list of inventions we now take for granted, such as water purification, nutrient-enriched baby food, freeze-drying, memory foam, precision GPS, cordless vacuum cleaners, frictionless swimsuits, gold-plating, scratch-free sunglasses and even OpenStack, an open-source software now deployed by most cloud computing services.

Another crucial example of space-inspired tech was the development of solar cell technology by NASA well before it became cost-effective. Why? Because if the now widespread use of solar panelling continues at the current rate, it will help wean our civilisation off fossil fuels and onto renewable energies.

“The alternative is too dire to contemplate.”

Now admittedly, if any of the current crop of billionaires did invent anything akin to the aforementioned technologies, it seems laughable to think they would simply give it away, patent-free, for the betterment of mankind like NASA did. Indeed, relying upon the eternal beneficence of billionaires might be most unwise, especially if you take Adam McKay’s controversial new satire Don’t Look Up to heart. In the film, a billionaire CEO (a frankly terrifying amalgam of Musk, Bezos, Mark Zuckerberg and the late Steve Jobs) intervenes in the destruction of an incoming planet-killing asteroid so as to mine it first for valuable rare metals. Spoiler alert: things end badly for everyone.

Nonetheless, with the long history of utilitarian innovation in mind, purely hypothetically speaking, let’s imagine if Musk, as a consequence of his ongoing quest to one day terraform Mars, somehow stumbled upon a tranche of technologies that could reverse climate change on Earth. Given what we know of Musk’s character, as quixotic or combative as he occasionally appears to be, it seems likely he would use this power for good. We can always hope.

Hope is all we have really, because the motivations of these billionaires do not really matter in the long run. Whether they are pursuing their dreams to colonise space out of ego, greed or a genuine altruistic ambition to help pioneer the proliferation of the human race beyond the stars, we do know this: technological breakthroughs will inevitably arise as a result of their stubborn insistence to write their names in the sky.

Just as with NASA’s myriad inventions, we have no real way of knowing yet what these discoveries might be or where they might lead, only that history suggests they will happen. And when they do, it is very possible they will not only have real application, but may, with any luck, hold the key to humanity’s salvation as a species and our planet as a habitat.

The alternative is too dire to contemplate.