Manuri Gunawardena, 28, is revolutionising the US$47 billion clinical trial industry

HealthMatch has raised A$25 million in venture capital since it was founded in 2019.

Experiencing firsthand the cutting-edge technology being used in clinical trials to treat an aggressive and terminal brain cancer, Glioblastoma Multiforme, is what inspired young medical student Manuri Gunawardena to leave her burgeoning medical career in favour of starting her own business.

Despite dreaming of becoming a neurosurgeon since she was a child, Gunawardena combined her medical expertise with a potentially life-saving business model – HealthMatch.

“What motivated me to start HealthMatch was knowing that if I could connect patients to clinical trials in a more efficient and effective manner, I could make an impact on many more lives,” Gunawardena tells The CEO Magazine.

Officially launched in 2019, HealthMatch has raised A$25 million in venture capital from investors across Australia, the US and Singapore (where the company received the largest local health tech funding round in Australia for 2020), making access to emerging potential treatments much easier for patients.

Having helped 120,000 patients create profiles on HealthMatch has allowed some 11,000 people to be placed in clinical trials in just two years.

A true champion in the field, Founder and CEO Gunawardena was named the winner of the Bold Future Award 2021 by Veuve Clicquot during its inaugural virtual awards ceremony featuring keynote speaker Rose Byrne.

“It’s not that long ago women had to hide their career aspirations in the business or medical world in social settings to not seem out of line with societal expectations, despite how ridiculous that seems,” Gunawardena says. “We have come a long way, but if we want every girl to grow up knowing the opportunities she has to make a real impact on the world, and knowing that she can challenge the status quo, then we need to make a conscious effort to celebrate it.”

And honouring exceptional female leaders is what Veuve Clicquot’s inspiring Bold Awards are all about.

Kristy Chong, Founder and CEO of ModiBodi, took out the pinnacle accolade when she was crowned with the 2021 Bold Woman Award during a virtual awards ceremony.

Jessica Christiansen-Franks and Lucinda Hartley, Co-Founders of Neighbourlytics; and Juliette Murphy, CEO and Co-Founder of FloodMapp, were also finalists of the Bold Future Award 2021.

The French Champagne producers have been officially raising a glass to trailblazing women since the maison’s 200th anniversary in 1972. However, the story of audacious leadership goes way back to 1805, when a 27-year-old Madame Clicquot took the reins of Veuve Clicquot following her husband’s death, leaving her to single-handedly revolutionise the industry at a time when women weren’t legally permitted to have their own bank accounts.

The awards highlight female entrepreneurs who meet challenges and break glass ceilings, all with a sense of creativity and innovation.

“I’m not sure if it’s always a good thing, but I think I share Madame Clicquot’s stubbornness in her pursuit of success,” Gunawardena shares. “From all I’ve read about Madame Clicquot, she never rested on her laurels or settled, regardless of the barriers.

“I’ve been fortunate to have an innate ability to focus on a goal and pursue it, regardless of the barriers that may exist or where people may consider it too ambitious or hard. This doesn’t always end in success, but only through pushing and trying do you break new boundaries.

“Madame Clicquot’s achievements and daring nature are inspiring and should be a lesson to all women to take the leap we all too often over question and rationalise away.”

Starting from a seed of an idea that was established in Gunawardena’s apartment, the entrepreneur had no idea HealthMatch would grow into a team of 35 software engineers, doctors and business minds.

“I had no product but a crystal-clear idea of the problem I wanted to solve,” she tells The CEO Magazine.

Following her passion to leverage digital technology to improve inefficiencies so patients receive better health care, Gunawardena is showing the world what can be done when a typically traditional industry fuses with technology.

Using proprietary algorithms to sort through thousands of clinical trials being run by pharmaceutical and biotechnology companies, HealthMatch is able to connect appropriate patients (who are registered) with suitable clinical trials – a global industry expected to worth US$47 billion in 2021.

“Technology is making an impact on every aspect of our lives and medicine should be no different,” she explains. “When we think of innovation and new treatments, medicine is actually an incredibly innovative field.

“It’s a problem though that our healthcare systems around the world still largely operate in legacy models, and often with constrained funding, which can halt progress at the pace we see in other areas.”

Embracing health tech will enable patients to have better care where geography won’t determine the outcome, while also providing cost-effective and scalable outcomes.

“The future of medicine is patient-centric,” Gunawardena insists. “Patients are more informed about their illnesses today than ever before.

“We have seen significant changes in this area, enabled by technology and a strong drive to make healthcare information more accessible to all patients.

“Often in the tech space there is an approach of ‘move fast and break things’. That’s OK in certain situations, but not when you’re dealing with patients’ outcomes or their private medical information.”

A solid attention and focus towards patients is only possible because of HealthMatch’s investors, which include Square Peg Capital, January Capital, and Malcolm and Lucy Turnbull’s family office.

“The funding allows us to grow and scale the business,” she says. “This is a huge enabler for us to become the global solution we want to be, but importantly allows us to make longer-term strategic decisions rather than those necessitated out of capital requirements today.” 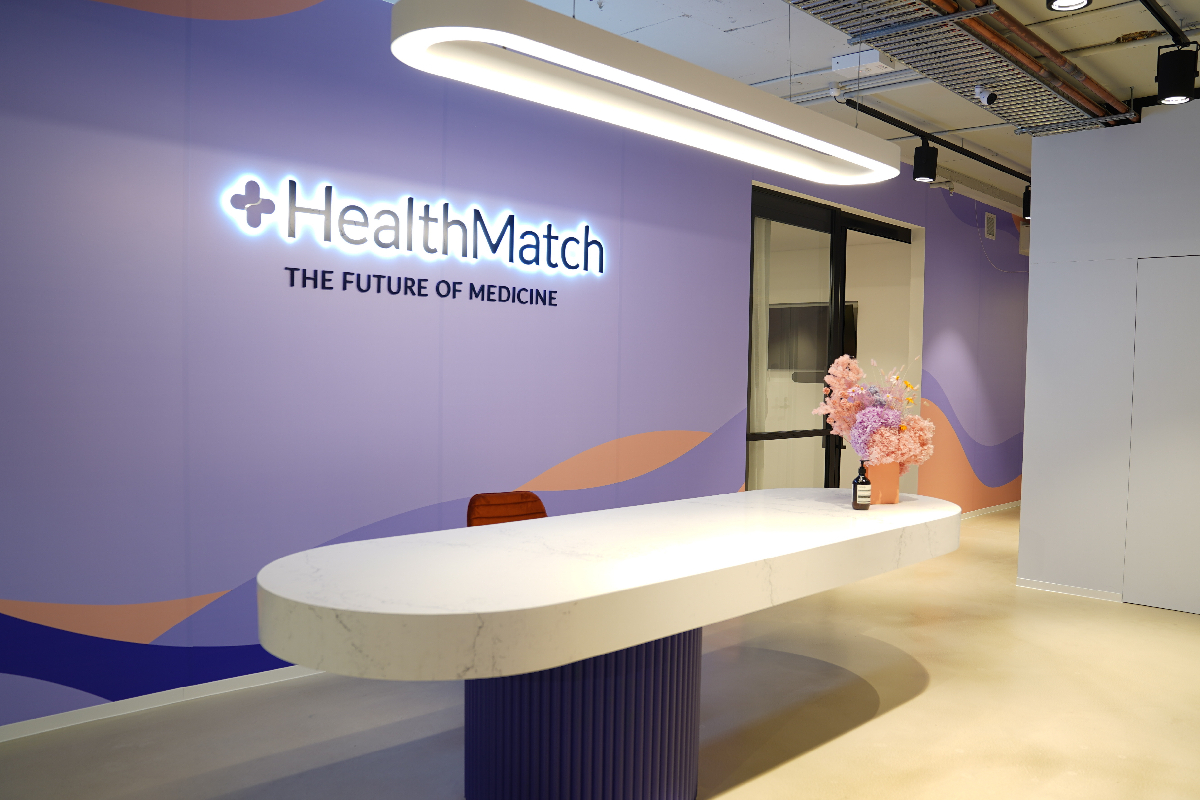 While being a finalist at the Bold Future Award is a significant milestone for the 28-year-old, the HealthMatch Founder believes it will help showcase to younger generations what a STEM career journey looks like, rather than the height of a career, which is generally celebrated.

“If we want to be inspiring more girls and young women into STEM, we need to showcase what that journey might look like for them being successful in 10 years’ time, not just at the pinnacle of their career after decades in the industry,” Gunawardena says. “We need to make that connection more real and tangible to inspire them to jump in and succeed in what is still a very male-dominated field.”

Named among Forbes’ 30 Under 30 Asia, not only has the entrepreneur faced hurdles in a male-dominated field, she has also risen to the challenge that comes with youth.

“I’ve been quite fortunate to avoid a lot of the ‘ageist’ criticism that I’ve seen other young businesswomen face, but I’ve certainly experienced it,” she reveals. “I remember meeting an employee of a potential customer who spoke down to me for apparently not knowing the problem space because of my age and experience before he’d even heard the concept of how HealthMatch works.

“A few years on and we work with the company he represented then and have a great relationship with them.

“My advice would be to simply not let it get to you – anyone that holds these archaic views is not going to last long in the current business environment and generally isn’t worth your time.”

Having founded the health tech company when she was in her fifth year of her medical degree puts the leader among some of the youngest game-changers in the world.

And although Gunawardena was well versed in medicine, business was a whole other field, offering one huge learning curve.

“Medicine doesn’t prepare you for the business world like a career in finance or law might,” she admits. “General operations were completely new to me, so I had to learn quickly to make things work.

“I think this was a real advantage. Instead of just following the status quo, I really think about why we do certain things and whether they are the right choice for us as a business.

“If there is a superpower I’ve developed, it’s that I’ve become good at synthesising advice – listening to every opinion, but then taking the time to methodically synthesise what I believe are the best inputs to then use to form my plan of attack.”

Just as HealthMatch places patients with clinical trials, Gunawardena is a mentor for The New York Academy of Sciences Global STEM Alliance – an international initiative encouraging the next generation of female STEM innovators, which similarly matches high school students with female professionals.

As a passionate advocate for education, the CEO believes the key to increasing women in STEM careers is through sharing the diverse opportunities STEM truly offers.

“There are connotations that if you are in STEM, you are sitting in a lab running assays all day, which is simply not true,” she explains. “We need to not be one-dimensional in how we speak about STEM.

“Far too many think to work in STEM you need to invest 10 years in university and graduate with a PhD – it’s just not the case.

“The truth is many job opportunities today are in STEM-related disciplines and this will just compound in the future. We need to be really imparting that knowledge so young women can understand there are many great opportunities.”