Futureproofing your career is more important than ever before

Doing things the way they’ve always been done doesn’t cut it in the workplace anymore. 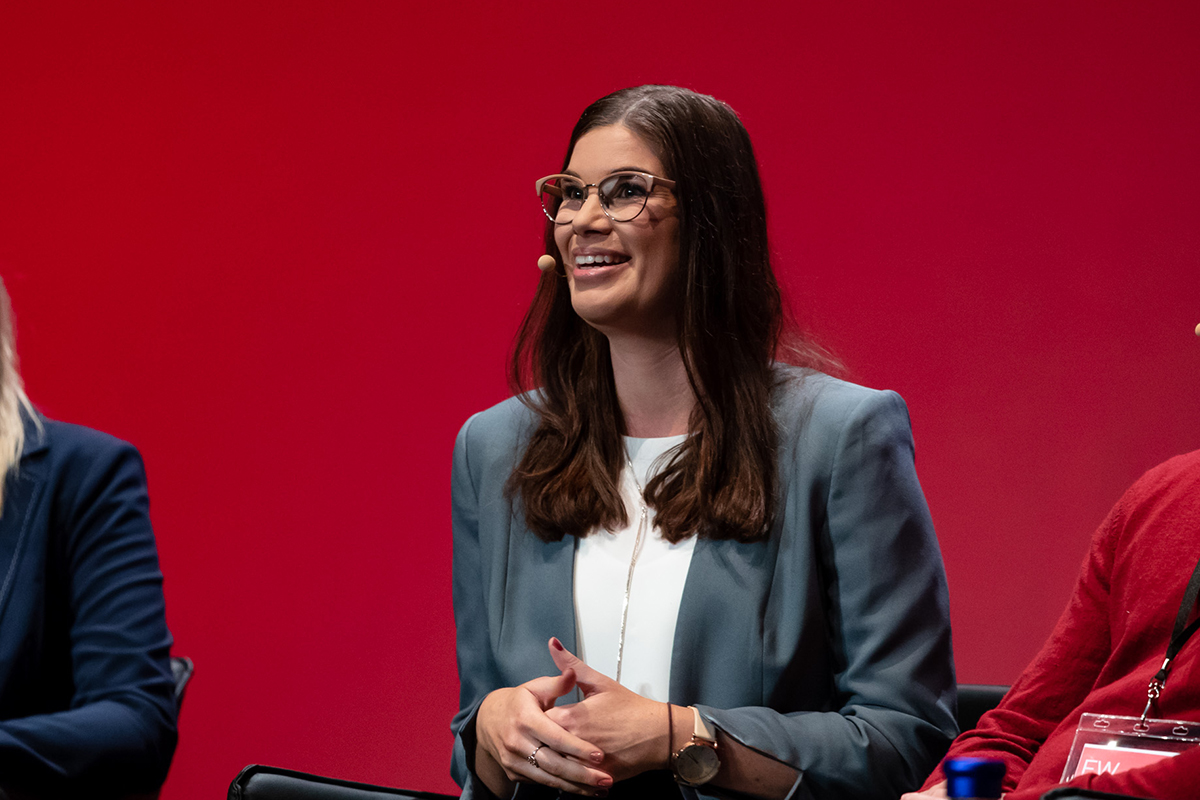 In a world completely disrupted by the novel coronavirus, there is no better time to think about jobs of the future.

From our offices and our kitchens to our local cafes and schools, there is no hiding from technology and its inevitable force shaping every aspect of our lives.

Whether you’re a top CEO of a multinational or an entrepreneur with the next billion-dollar idea, AI is prevalent to differing degrees in all careers.

There is no value in ignoring the world of tech, it’s here to stay. But we can embrace it by futureproofing ourselves.

“No one really has job security.” – Amy Smith

After working within one of the largest networks of more than 16,000 executives across 16 countries, supporting CEOs and non-executive directors of up to A$100million companies behind the scenes to build their personal brands and launch their executive coaching businesses, Founder and Director of Aligned Tribe Amy Smith now supports leaders in adapting their careers and businesses to the ever-evolving online world.

“We are now being forced to think differently,” Amy told The CEO Magazine. “Both executives and entrepreneurs no longer have the luxury of sticking to their guns and doing things merely because ‘that’s always the way it’s been done’.

“There have always been changes in the world that businesses have to adapt to. The difference now is the fast pace at which these changes are taking.”

The Workforce of the future: The competing forces shaping 2030 study by PWC reveals that 73% of people believe technology can never replace the human mind, yet 37% are worried about automation putting jobs at risk. “We are seeing the way we work transform before our eyes at a rapid pace,” Amy explains. “It’s easy to blame companies about decisions they make along the way, but the reality is that it will be solely up to us, as individuals, to continually create our own work and create our own job security.

“Your ability to succeed in your career, or in business, is 80% mindset and 20% talent.”

The career coach, who has helped organisations of all sizes including HSBC and YMCA, believes embracing entrepreneurial traits – no matter your experience – is vital to evergreen success.

“When you think about the fundamentals of entrepreneurs – even though the term has been romanticised in recent years – the focus should always be on solving problems in the market,” Amy explains. “These same principles can, and should be, adopted by executives.

“Taking an agile approach is one way businesses can operate and evolve quickly enough to handle any disruption, adapt and not only survive, but thrive.”

Ways to futureproof your job The expert believes that one of the steps to successfully futureproofing yourself and preparing for jobs of the future is simply being proactive.

“Executives and entrepreneurs both need to be thinking proactively about mobility, stability and credibility in order to set themselves up for continual success to futureproof their careers,” she explains.

Being agile, continually developing skill sets, and personal branding are the three ways people can prepare for jobs of the future.

“The best CEOs and entrepreneurs I know understand the one thing you can always choose is your mindset and how you show up at work,” Amy says. “By proactively adopting a growth mindset, thinking outside the box and remaining mobile, the focus shifts towards ‘how can I adapt and develop’ as opposed to thinking ‘this is just the way it is’.

“The famous story of Blockbuster’s undoing by Netflix is a great example of where executives actively stuck their heads in the sand about what was truly going on in the industry.

“As a result, they were unable to truly see the movements of the market and the business subsequently failed.”

“Continuing to grow and develop your skill set is just as important at the highest levels of your career as it is in the beginning,” the career coach shares. “Leaders that have been proactively developing capabilities over the years will be best placed to handle challenges.

“And those that aren’t – unfortunately, they will be caught flat footed and have no choice but to adapt, and fast.”

“Your personal brand is the one consistent element throughout your career that you completely own,” she says. “It is your unique selling point and competitive advantage where you are in the driver’s seat.

“Executives need to have a personal brand by design, not by default. Create your own narrative, regardless of who you work for, and continually evolve your brand to remain relevant in real time.

“In the digital world, not having an online presence can actually hurt your career, as perception online is the new reality.”

The biggest threat to job security

The pandemic has hit the world harder than anything in recent history, but world events aren’t the biggest determinants of job security.

Sticking to your comfort zone and being complacent is one of the greatest threats to careers, the Aligned Tribe founder explains.

“No one really has job security,” Amy says. “Between the rise of artificial intelligence, decisions to please shareholders, outsourcing and economic downturns, jobs will no doubt continue to evolve.

“It’s those who continue to proactively develop themselves, even when it’s uncomfortable, who will be the ones in the position to not only identify opportunity when it arises but also take full advantage of it.

“Change is a constant in our lives and people that can adapt to that are the ones that seem to always ‘win’.”

A threat to employers Not only are employees at risk of role changes because of IT, but businesses are also at risk of losing quality staff to the rise of the side hustle.

“Many organisations are now blind to the fact that 64% of millennials have a side hustle alongside their 9-to-5 job and 67% of millennials who are working in a full-time secure job are thinking about starting their own business one day,” Amy says. “Given that millennials will make up 75% of the global workforce by 2025, this is something executive leaders need to be paying attention to.”

Workplace flexibility has been hailed as one of the prime aspects to retaining hardworking employees. And the ones who will suffer are the companies failing to take it on board.

“Employees are no longer just cogs in a wheel in the new era of work. Organisations that understand this will come out on top.” – Amy Smith

“The fact is that the way we are working now won’t go back to what we’ve always deemed as normal,” the career coach says. “There is often a great sense of fearing the unknown when it comes to change, so organisations that make it acceptable for their employers to innovate and experiment during tough times like we’re seeing with COVID-19, even if it means failing in the process, will be the ones to keep moving forward.”

Twitter is one of the few leading companies to embrace innovative ideas. The tech company, which made US$1.2 billion in 2019, announced its permanent remote-work policy as a result of the pandemic – one of the first of its kind for a large enterprise.

“Businesses that thrive in these times are the ones that have built a strong culture that is not only open to change, but actively pursues it and is unafraid to fail in the process,” Amy says. “Sticking to business as usual just doesn’t cut it anymore.”

Jobs at greatest risk of extinction

It may still be in its infancy, but AI is predicted to contribute an additional global economic output of US$13 trillion every year by 2030, according to McKinsey Global Institute.

While IT advancements undoubtedly add value to companies embracing the innovative tool, it comes at a cost of human resources.

A study by Oxford Economics predicts that by 2030, more than 1.5 million jobs will have been lost to AI in the US. In China, the figure climbs past 11 million and for the EU, almost two million people will be replaced by robots.

“Jobs will transform, and the technological advancements being made aren’t avoidable,” Amy says. “Whilst the roles may become obsolete, it does not mean that people performing these roles will be too.”

It’s expected that by 2030, 60% of jobs could be automated, according to McKinsey & Company. But with that comes newly created roles.

“You can now work as a Drone Manager, an SEO specialist or even as a Chief Listening Officer – all of which didn’t exist 10 years ago,” she says. “Moving forward, for people in high-risk roles, transferable skills are the essential.

“Employees are no longer just cogs in a wheel in the new era of work. Organisations that understand this will come out on top.”

Upskilling to transition into new roles will add value, expertise and capability to any company when traditional positions may no longer be required.

Retail salespeople, couriers and postal service workers, travel agents, bank tellers, factory assemblers, administrators, drivers, accountants and lawyers and farmers are some of the jobs that possess the greatest risk of being replaced by AI.

“As we inevitably move toward increased adoption of AI in the workplace, the biggest challenge that executives need to be prepared for is how to bridge this intersection of technology and humans together in the workplace,” Amy says.

10 jobs of the future The traditional workplace, which was coined by Henry Ford in 1926, consisting of a strict five-day work week with 9-to-5 hours is now long gone. And within the next decade, the workplace will continue to drastically transform.

“Jobs that are most in demand for the future are not only driven by technology factors, but demographics too,” Amy explains.

As roles become increasingly fluid, it’s crucial for employees to upskill themselves to prepare for jobs of the future.

“Being digitally proficient, having high interpersonal skills and problem-solving capabilities are areas that should be high on anyone’s agenda if they are looking to futureproof their careers,” she says.