Iconic chocolatier wouldn’t have survived COVID without this one asset

How Koko Black went from voluntary administration, to being saved, to getting hit hard by the pandemic to, finally, soaring.

When you wander through the magical Royal Arcade to the European-style boutique home of Koko Black’s wonderous gourmet chocolate, your senses are brought to life – evoking your inner Augustus Gloop. But when you crack the glossy surface, you find the premium brand almost ceased to exist.

The handcrafted brand entered voluntary administration in 2015, with businessman Simon Crowe quickly snapping it up and breathing life into the company.

With CEO Nicolas Georges taking the helm in 2019, Koko Black was given a new vision and underwent a total business overhaul.

“We crammed three years of business internal transformation into one year,” Nicolas tells The CEO Magazine. “We needed to get to the other side as quickly as we could because we knew that the only way we could thrive is by actually getting consumer growth.

“The first year was a mad year of rebranding.”

Most surprisingly for a company in the digital age, it was the chocolatier’s ecommerce platform that required the most work.

“We’re such a small business that everybody’s got a skill we need. The minute that skill walks out the door, it is so hard to reacquire and bring it back and build.” – Nicolas Georges

Mere months before COVID-19 rocked the world, Koko Black was only starting to automate its online store.

“Firstly, we got our orders through our ecommerce store with no view if we had the products or not,” Nicolas explains. “If we had it in inventory, we were just lucky to have it.

“We were just coping manually with orders. We put them into the financial system, we would copy the messages people wanted to send to a Word document and print them on an ink jet printer, and we were putting our products in polystyrene boxes with ice – that was our ecommerce platform in 2019.

“I’m so glad we started with that because, even though it was expensive and painful, if we had not done the ecommerce work, we would not have been able to get through COVID.”

The drastic and quick measures certainly paid off, with the gourmet chocolate maker celebrating its strongest Easter in the past five years – with sales up about 15 per cent compared to 2019. As a European looking in, “adopted Aussie” Nicolas was able to bring a set of fresh eyes to overcoming the challenges and give direction to the new vision.

“The business has been around for quite some time, so sometimes you don’t see things anymore, it becomes a bit like wallpaper,” he says. “It was important to have the ability to look at the business and not just adopt it as it was; to really be able to distinguish what’s of real value and what’s not and build it from there.

“The main issues were twofold – how we were presenting ourselves to the world. And, on the other side, our business was not a business.

“There were so many gaps – even if we were successful at growing the business, we would collapse very quickly because we didn’t have the foundation underneath to support it.”

Described as being a complex business for its size, the gourmet chocolate manufacturer was forced to iron out issues, whether it was with corporate clients, retailers or distribution, in order to flourish.

Stepping into the C-suite shoes at the artisanal chocolatier, the French executive brought a wealth of knowledge from brands including Nestlé, Mondelēz International, Cadbury and Peters Ice Cream.

While Koko Black was originally inspired by traditional Belgian chocolatiers, it has been remodelled into a contemporary Australian boutique – shining a light on the unique flavours Down Under.

One of the stand-out collections is the Native Collection. From green ants and finger limes to macadamias and Tasmanian leatherwood honeycomb, the unique range celebrates the exquisite bush ingredients found only in Australia.

Armed with a true passion for innovation, the executive lives to spark new ideas off the back of other ingenious inventions. 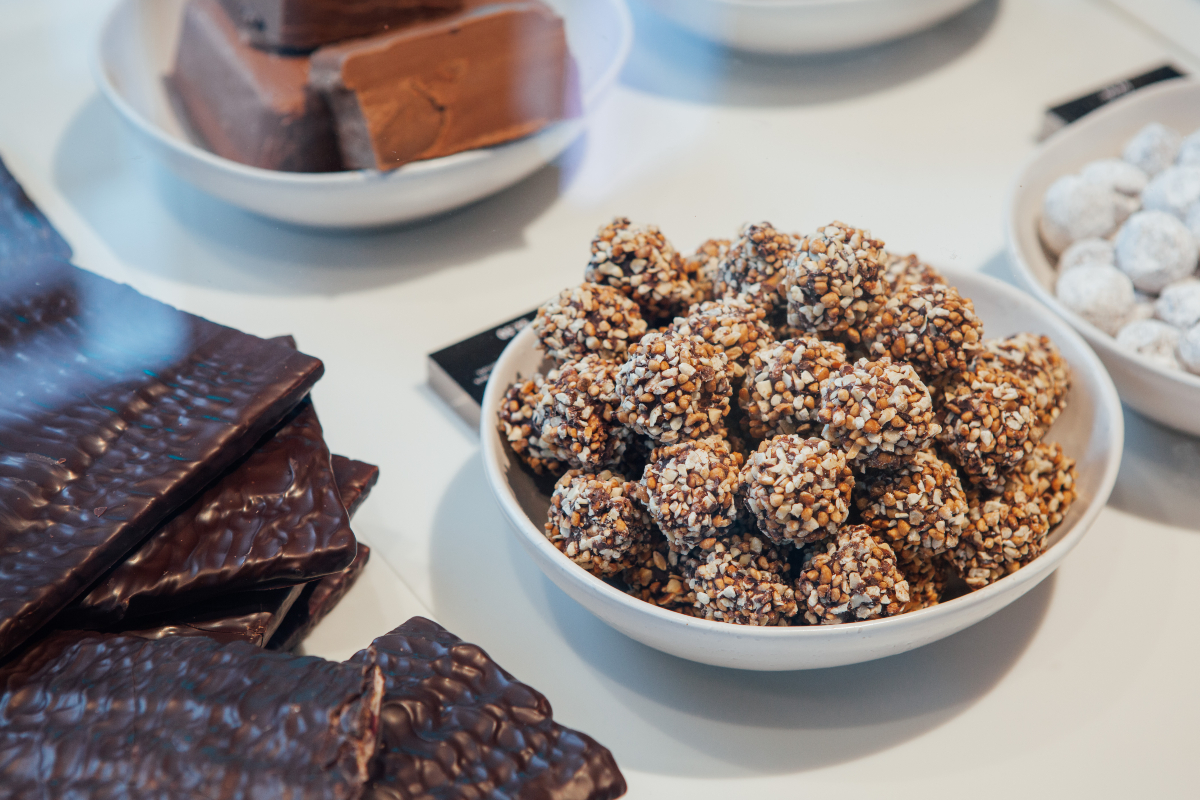 “Innovation doesn’t mean coming up with the new iPhone every day,” he says. “You can do multiple things that are still innovative. In this business, you can truly be innovative, create things from scratch.

“There are hundreds of artisanal chocolate makers in the world; there are plenty in Australia. What makes us us, is being able to understand what contemporary Australian means and that it is really important.

“It’s a journey, as they say,” Nicolas shares. “There’s this passionate product making – there’s really something there, and because it’s artisanal, it’s real. It’s an act of creation almost every time and I just love that.”

With international tourism on pause and only two major chocolate events for the year – Easter and Christmas – the gourmet chocolate producers have had to reinvent their brand and find consumers in an innovative way.

“If we had not done the ecommerce work, we would not have been able to get through COVID.” – Nicolas Georges

Retail sales this year have made up 60 per cent of the brand’s total sales, compared to about 90 per cent not so long ago. Incredibly, online sales have increased four times in the past couple of years, up from 10 per cent.

“What we’ve learned through our ecommerce last year is we’re really a gifting brand,” Nicolas explains. “We’re really something people buy for others more than for themselves.

“The whole game for us now is trying to get people to shop more often, driven by interesting innovation or partnerships. We’re working on reinventing it a little bit.”

And it appears to be working. Koko Black partnered with Eddie Stewart and Min Chai from Tokyo Lamington, who began making unique lamingtons in Australia when they were unable to return to the cafe they established in Tokyo, Japan. In one day, their entire stock sold out in 40 minutes.

“It’s really important from a business perspective to give reasons for people to come and make sure all our channels are still very active,” Nicolas says. “We can’t rely on just being a retailer, it doesn’t quite suffice.”

Biggest lessons of leadership during a pandemic Stepping into a new CEO role has its challenges, but those hurdles are heightened when you’re met with a global pandemic.

Not only was Koko Black faced with destructive coronavirus, its factory and headquarters was based in Melbourne – which ranks among the toughest in the world when it comes to lockdowns.

Nicolas, who says he never has enough of the gourmet chocolate, explains the five biggest challenges he faced while leading his team through COVID-19.

“It was really tough as a leader because people were looking to you for answers, and answers you don’t know,” Nicolas reflects. “It’s not even me, it’s looking around and the government had no answers, people had no answers, we didn’t know anything. Suffice to say, that’s not an excuse. If you’re a leader, you’re a leader.”

“Coming up and working daily with what’s in front of us,” he says. “It was literally that. We couldn’t think three days ahead. We had to think one day at a time and not be paralysed by what we didn’t know but work with what we knew.

To downsize or not?

“You were thinking what if we make a mistake at the cost of the business or all the people. Do you keep everybody, or do you reduce your working teams because you can only carry so many? We chose not to reduce. We chose to keep our team and, instead, all make an effort to keep everyone. I’m so glad we did – it gives the mindset that everybody is important.”

“We’re such a small business that everybody’s got a skill we need. The minute that skill walks out the door, it is so hard to reacquire and bring it back and build.”

“Stand up and at least deal with what you know,” he says. “At that time, it was about being transparent with people but, at the same time, trying to give some hope. It was always about not thinking too far ahead but also being up and ready at all points. There was an element of positive energy and adrenaline coming from that, by actually being with people at the expense of working with what we know.”