Shantanu Narayen has transformed Adobe into one of the world’s most valuable and respected companies – and India is playing a bigger role than ever in its extraordinary success.

Shantanu Narayen is someone who cherishes every night he spends in his own bed. As Chair, President and CEO of Adobe, he’s away on business for large chunks of the year and gets sleep deprived by changing time zones and overnight flights. So when he arrives back to his Palo Alto mansion after a few days away, it’s surprising that he doesn’t take full advantage of his cosy eiderdown duvet.

Instead, as the last of the midnight stars disappear behind the bank of fog rolling in off San Francisco Bay across Silicon Valley towards the foothills of Monte Bello Preserve, he often creeps into his sitting room, flicks on ESPN and settles down for a few nocturnal hours of bliss while his wife Reni sleeps upstairs.

“I still stay up late some nights, much to my wife’s dismay, passionately following the Indian cricket team,” Narayen once confessed to The Times of India. “I’ve always been a big cricket fan and often joke with my friends here in America that cricket is baseball done right.”

It’s been more than three decades since the 58-year-old left the subcontinent to complete his studies in the US, but its influence on his career and life never waned, even as he rose to become one of the most respected and successful leaders of his generation, steering Adobe to become one of the world’s 40 biggest companies.

He’s credited with much of the success, regularly appearing in lists of the most respected and powerful CEOs and businesspeople on the planet by the likes of Forbes and Fortune. In 2018, he was named Global Indian of the Year by India’s The Economic Times.

While his heritage still guides him today, the influence that he personally has on millions of Indians is every bit as powerful, as Adobe ploughs billions of rupees into the economy and provides free software to impoverished schoolchildren and students.

Watch to discover why Narayen was ranked among the top CEOs in the US for 2021:

However, while Narayen certainly feels passionately about using technology to free vast populations from poverty, altruism isn’t the only reason for his company’s investments. He knows enough about the nation to recognise the immense potential of its citizens for entrepreneurial drive and innovation. He has described it as Adobe’s greatest opportunity.

“Digital literacy is going to provide people with ample opportunities and make their lives better,” he told Indo-Asian News Service in 2019. “For us, the aim is to make digital literacy accessible to every Indian. It is a way of giving back to society.”

Adobe has steadily grown its workforce in the country to nearly 6,000 during Narayen’s 14 years at the helm. A third of its product research takes place there, including an advanced artificial intelligence lab not far from his childhood home in Hyderabad.

“The world is watching India progress through its digital transformation journey … and Adobe remains committed to delivering the latest innovation,” he told The Times of India on a recent visit. “Every time I return to India, it’s impressive to see the progress that’s been made in the business and technology climate.”

One of his proudest moments was achieving complete pay parity between male and female employees, something few other multinationals have accomplished.

The executive credits his parents for giving him the drive and ambition to get to the top. His father ran a plastics factory while his mother taught American literature. When a teenage Narayen told them he wanted to be a journalist, they talked him out of it, advising him to become an engineer instead.

“In a startup, you learn a lot. You are drinking from a firehose, frankly.” – Shantanu Narayen

For a time he considered training as a doctor, but there was a small problem: he was afraid of the sight of blood. After graduating with an electronics engineering degree, he moved to the US for his master’s degree in computer science at Bowling Green State University in Ohio, followed by a Master of Business Administration at the prestigious University of California at Berkeley’s Haas School of Business. The latter honoured him as Business Leader of the Year 15 years later.

“Ohio was a special place to begin my life in America. Not only was I living in a foreign country, I was also living outside of my parent’s home for the first time. So I had to balance learning to do things like cook and clean for myself and, on top of that, dealing with all the challenges that come with being thrown into a completely different culture,” he told The Times of India. “I have many fond memories of my time in Ohio and, yes, meeting my wife there would clearly rise to the top of the list.”

Most of his fellow students were lured by the emerging cabal of Silicon Valley tech giants. Narayen had offers too, but surprised his tutors by instead joining an unassuming automotive tech startup, Measurex Automation Systems.

It wasn’t long before Apple snapped him up for what would prove to be a somewhat roller-coaster relationship. It was 1989, and Steve Jobs had been ousted, leaving the company struggling to reinvent itself. Narayen played a key role in turning its fortunes around. 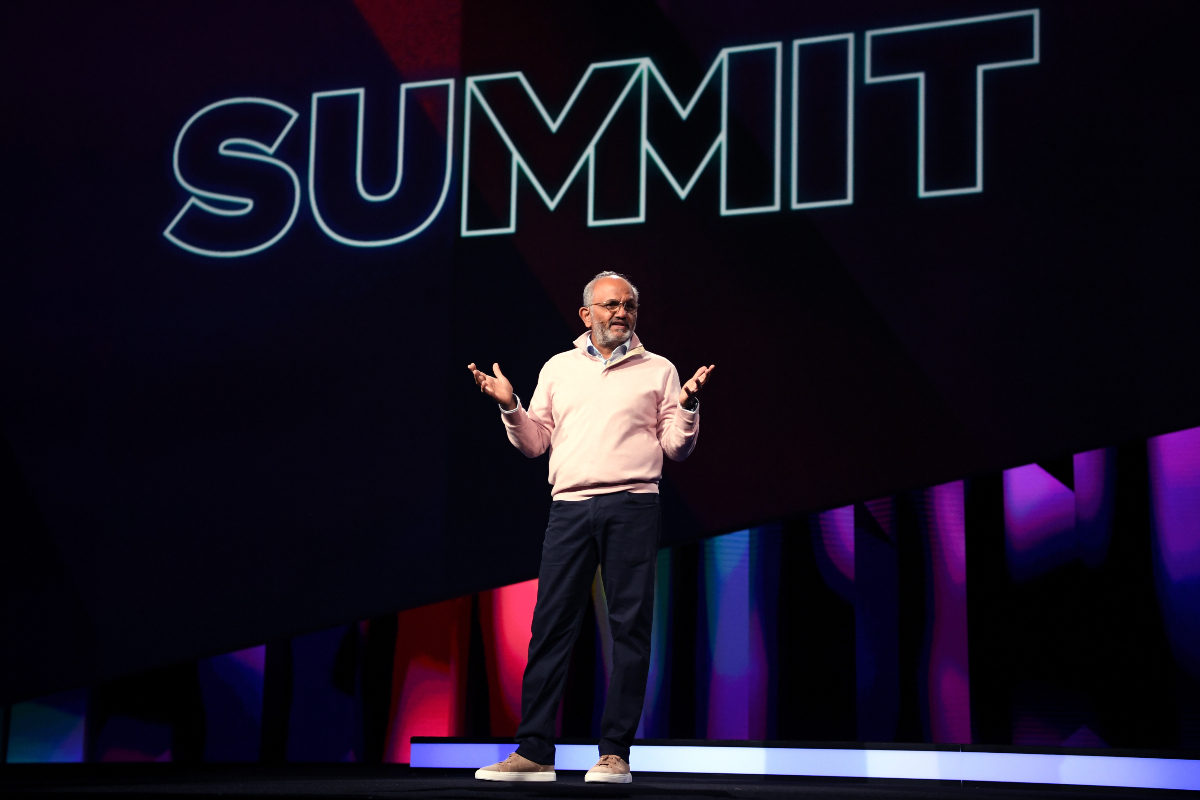 Narayen at the Adobe Summit in 2019

“At Apple, you really believed you were going to change the world,” he told Indian business website Mint. “The statement at that point was, the journey was the reward. It felt like that. I was delivering this software to millions of people and it’s hard not to get excited about that.”

After six years, Narayen quit to co-found a pioneering digital photo-sharing enterprise called Pictra. “In a startup, you learn a lot,” he revealed to Mint. “You are drinking from a firehose, frankly. In the mid-1990s, they said you shake a tree on Sand Hill Road [a private equity cluster] and money fell out. It was the internet boom; everybody was starting a company. We started one of the first picture-sharing sites and thought the whole move from analogue to digital photography was going to happen. It was a great experience but clear 12–14 months down the line that the funding and business models hadn’t quite matured.”

With the firehose producing little more than a dribble, it was back to corporate life, joining Adobe in 1998 to oversee worldwide product development. Appointed President and COO in 2005, he took over as CEO in 2007 with a brief to lead the transfer of signature software like Photoshop, Acrobat and Premiere Pro to the cloud.

However, Narayen did so much more than that, making cunning acquisitions, diversifying, responding to Industry 4.0 and keeping Adobe front and centre of AI innovation. His forays into India also reaped considerable rewards and led to other blue-chip companies following suit, boosting the economy still further. On his watch, Adobe’s market cap has risen from US$11 billion in 2008 to US$297 billion in September this year, and shows no sign of slowing.

Nor does his reputation on the world stage. Former US president Barack Obama recruited Narayen for his Management Advisory Board, he was named Global Innovator of the Year by Indian trade association NASSCOM and honoured with Padma Shri, India’s fourth-highest civilian award. His 21,000 employees also clearly approve of his stewardship, as Adobe regularly appears in lists of the best places to work.

But his 35 years in California have caused one slightly irritating side effect when he returns to Hyderabad. “The traffic is now 10 times [worse and my] antibodies aren’t what they used to be, [so I] can’t eat at roadside vendors like I used to be able to do and loved,” he lamented to Mint.

Perhaps his biggest ever challenge will come in 2023 when he and Microsoft CEO Satya Nadella, who also hails from Hyderabad, will attempt to sell the joys of cricket to Americans. The two have invested heavily in Major League Cricket, but whether middle America will agree that the calming sound of leather on willow makes it “baseball done right” is yet to be tested.