Devastatingly effective, the marketing tools of the past have lodged permanent billboards in billions of heads over the years. So why have they gone off the boil? 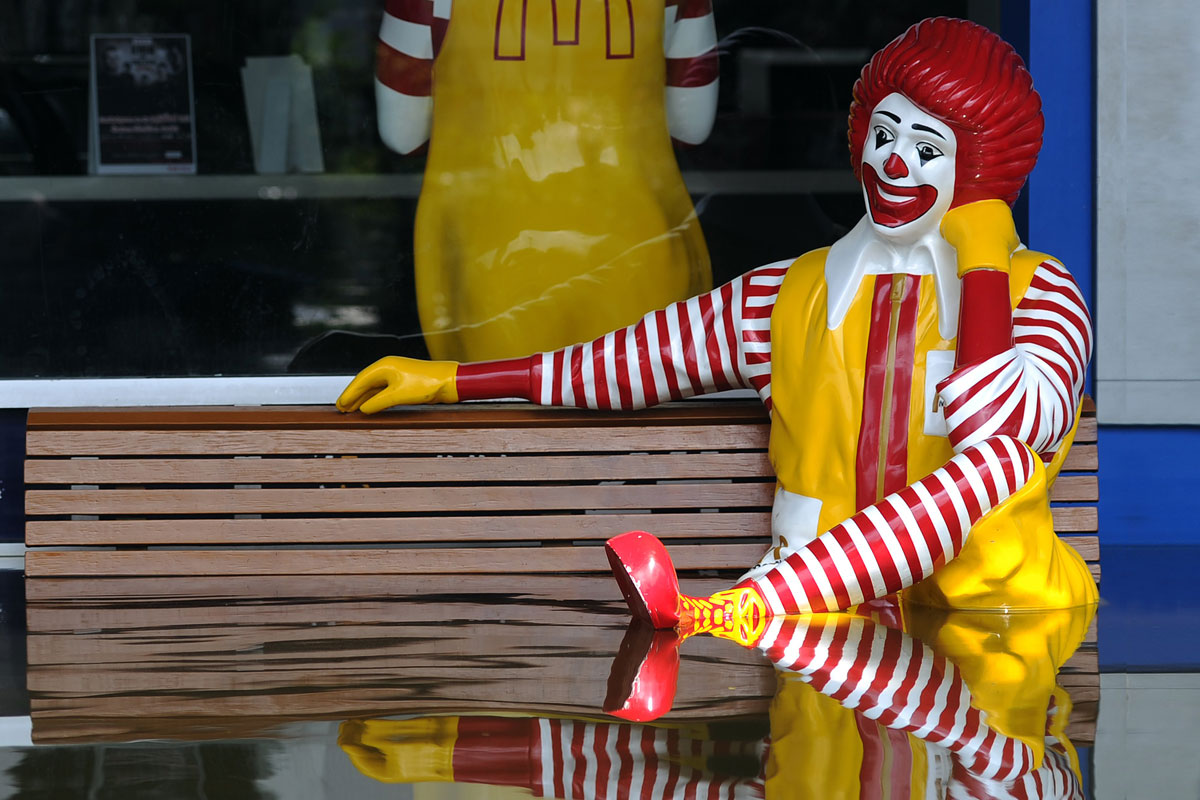 Cheeseburger firmly in hand, the clown smiles and reaches out to the child. “Follow me,” says the clown. “There’s more inside!” While it may read like a scenario from a horror film (or worse), this was once the linchpin of one of the most effective marketing strategies of the 20th century.

In one simple image, mascots give companies a face and a softer, fun image, encapsulate the business’s philosophy and improve brand recognition. Ronald McDonald made the eponymous fast food restaurant look like the ideal place to take the kids for a meal; Snap, Crackle and Pop brought a sense of fun to a relatively boring breakfast; the Michelin Man anthropomorphised tyres and in doing so increased consumer awareness and care for their black rubber chariots.

Moreover, mascots give the appearance of having endorsed the product behind the packaging. There’s a level of trust involved, an unspoken transaction that occurs upon making eye contact with your prospective purchase: “If it’s good enough for a cheerful cartoon monkey or a short, winking bald man, it must be good enough for me.”

Such was the thinking for a very long time, and research bore it out: brands with mascots were proven to increase profits and market share. For over a century, mascots were a powerful tool and won countless hearts and minds.

The song remains the same

Where eyes fail, ears pick up the slack, and in an era dominated by radio and television advertising, a 30-second ditty had the power to worm its way into someone’s brain and lodge itself there for a lifetime.

The concept was simple but devastatingly effective: songs are catchy, so a tune about soft drinks or washing detergent can also be catchy. And they were: chances are readers of a certain vintage can still hum along to ‘I’d Like to Buy the World a Coke’ or know all the words to ‘I’m a Toys R Us Kid’.

Even songs created outside the advertising bubble were brought into the industry’s employ to indelible effect. Ask yourself: are you hearing the William Tell Overture, or an overture by Pizza Hut?

But mascots and jingles have both fallen by the wayside in recent years. Products are less likely to welcome you with a smile or serenade you, and the ones that do seem like anachronisms.

For starters, many of the oldest mascots – some dating back to the dying decades of the 19th century, particularly in the US – are racially insensitive today. Any power they had to sell products has by now entirely dissipated. Such characters actively hurt their brands in the marketplace, and are usually retired with much fanfare.

The quieter departures are much more interesting, however. Ronald McDonald wasn’t alone in his hawking of quick-fix burger fare: starting in the 1970s he had a whole menagerie of colourful muppet-like characters by his side to entice youngsters to the Golden Arches. But times change, and tastes along with them: the late 1990s saw the clown’s momentum grind to a halt as concerns over childhood obesity grew.

No longer was it palatable to appeal to such an impressionable demographic. By the 2000s, Ronald’s friends were history, and although he occasionally appears in a dramatically reduced capacity, it’s clear the clown himself has hung up the stripy duds.

Today’s marketing gurus believe the move away from mascots is largely due to changes in the marketplace. Audiences have become fragmented by the multitude of advertising opportunities available, so mascots no longer enjoy sustained attention or focus and thus can’t get a foothold.

The limited time a brand has to make its appeal to consumers is no longer worth crowding with grinning cartoons or talking mattresses, gimmicks the market can see through. Many companies believe it’s better to lead with the product.

Jingles have suffered a different kind of fate, and the damage may have been self-inflicted. When ‘I’d Like to Buy the World a Coke’ was released in the early 70s, it was so popular that the company released it as a single. In the 80s, the use of actual songs in advertising exploded, a trend that continues today. The use of a hit song in a commercial appears as a kind of celebrity endorsement, an advertising tactic that’s stronger than ever.

Although their glory days are undoubtedly behind them, mascots and jingles now enjoy an interesting afterlife. When these marketing tools die, their ghosts live on in our collective consciousness, a fact companies regularly exploit.

It’s an easy win for corporations with strong marketing legacies, and one they’re not afraid to use over and over. It’s not unusual to see a logo from the past emblazoned on limited edition ‘retro’ packaging or to hear old jingles either redone in a modern format or resurrected to hit that nostalgic reflex in our minds.

These are instant links to the billboards in our minds erected during our childhoods, tacit validation of our lived experiences and deeply held opinions that “things used to be better”. Whatever chemicals our brains release in response flow right to our purchase lobe, and everybody’s happy.

There is a prescient scene in the 1993 Sylvester Stallone flick Demolition Man, which should give us all pause. In the film, Stallone plays a 1990s cop who awakens from cryogenic sleep in the year 2032, a time when all popular music has been replaced by advertising jingles. As his two future-police partners happily sing along to the Armour Hot Dogs song as it plays over the radio, Sly rubs his temples in disbelief.

We live in a world where there exists online a huge audience for the advertisements of yesteryear. YouTube plays host to hours and hours of digitised TV commercials from bygone decades, essentially free advertising for the companies still around. Our brains are once again complicit in the act, releasing a powerful dopamine hit upon being stimulated by the sound of ancient ad tunes.

Only a decade out from Stallone’s dystopian headache, the long-term effects of marketing are becoming clearer by the day. Jingles and mascots may be gone, but they will never be forgotten.

Read next: What you need to know about influencer marketing