Behind Prada’s US$11.4 billion empire

We look at the designer and businesswoman who continues to profit from her ‘ugly chic’ fashion approach.

“Ugly is attractive, ugly is exciting.” The sentence Miuccia Prada uttered over a decade ago, in response to ponderings over her unconventional approach to fashion, and they still stand true. In the eyes of Miuccia, ugly holds much more potential than its counterpart of beauty; a belief that has fortified the 69-year-old Italian into a self-made billionaire worth over US$3.3 billion.

Miuccia’s collections are a celebration of this counter aesthetic, seducing consumers into buying pieces that reveal an unorthodox twist. It’s an attitude that has seen the Italian luxury goods house flip the fashion scene on its head since Miuccia first championed a collection of mix-and-match items on the runway for its Spring/Summer 1996 Collection.

Using commonly disregarded colours like muted nut-browns and provocative lime green and tangerine splashed across opulent Italian-made fabrics – Miuccia revealed that good taste need not always be appealing but rather abstract, similar to a Picasso painting. Her collections always end up qualifying as easy on the eyes, for the most part.

The rebirth of the Prada banana

After three years of slipping sales and a reported collapse in profit, the Milan-based fashion house has officially returned to growth this year with the comeback of its signature ‘ugly chic’ aesthetic. By relaunching some of the brand’s iconic products including block-heeled loafers and nylon belt bags, and with the rebirth of its 2011 banana motif that was smeared across Prada’s latest collection in the form of pumps, sleeveless knits, A-line skirts, and signature leather handbags, Miuccia is reinstating Prada’s unique identity, and yes, it’s a little ugly.

By relaunching some of the brand’s iconic products including block-heeled loafers and nylon belt bags, and with the rebirth of its 2011 banana motif … Miuccia is reinstating Prada’s unique identity, and yes, it’s a little ugly. In 2011, the 105-year-old company was listed to the public, yet Miuccia remains majority shareholder of the Prada Group that also founded diffusion line Miu Miu. With the 40% rise in share value over the past 12 months, investors are confident that the brand’s growth will accelerate later this year, due to its recent focus on Instagram and the anticipated launch of Prada’s sister sports line Linea Rossa. Although late to the social media game, Prada is following in the footsteps of Gucci, utilising digital platforms and influencers to maximise on sales – a strategy that is now commonplace among luxury brands.

The rise in sales is also expected to be the result of the booming Chinese market, which has also contributed to the success among brands owned by both LVMH and the Kering Group. And rightly so. It was reported earlier this year that 32% of luxury sales worldwide are driven by Chinese shoppers, while China makes up for 8% of the global total purchases of luxury goods – and figures are only expected to grow as China’s young shoppers continue to breathe new life into the global luxury market. 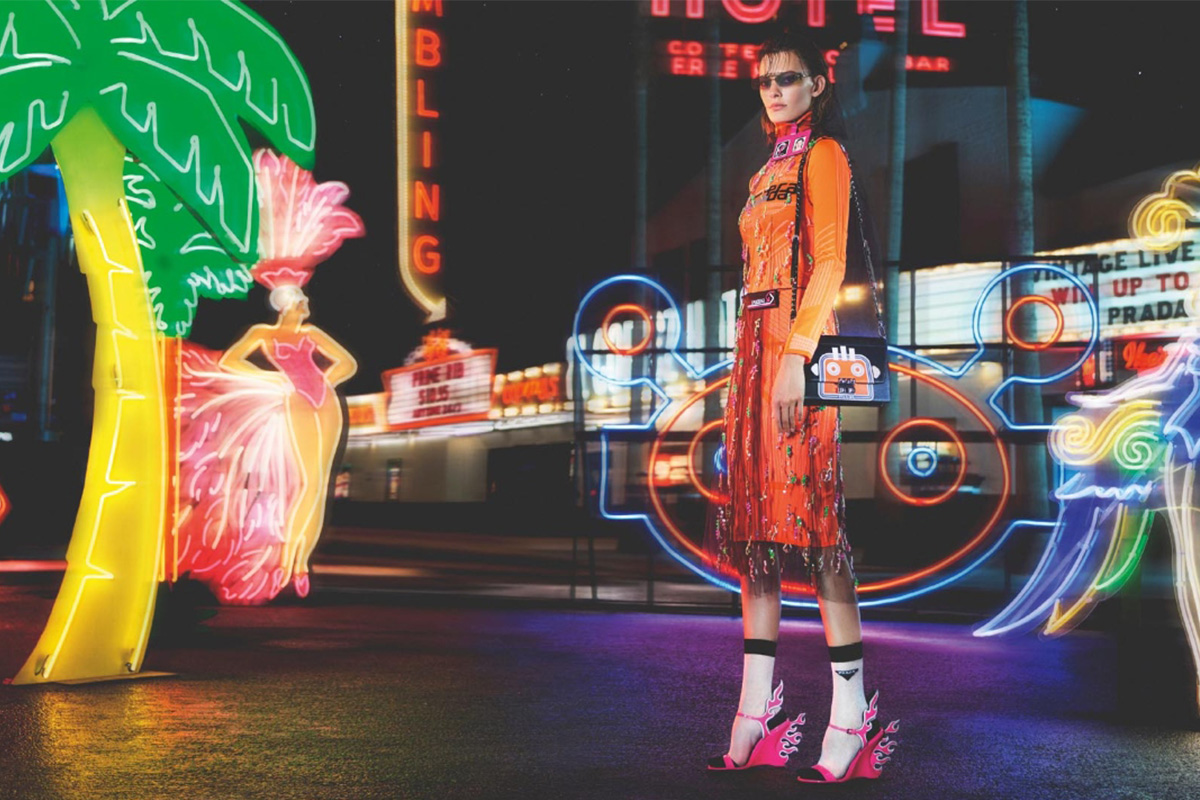 Miuccia and her team at Prada decided not to debut at last week’s Spring/Summer NYFW, yet off the catwalk the marque still had its moment with individuals across New York City donning the brand’s iconic flame heels and banana embellished oversized shirting (valued at US$1,700 – in case you were wondering), reminding us all that the brand has a cult following of individuals who favour cool over beautiful.

The Italian billionaire herself is more than just a handsome face. She has always prioritised challenging the system, both on the political and fashion scenes – although nowadays tries to steer clear of making any conspicuous political statements through her work.

Recognised as the first designer to bring feminism to the catwalk with the debut of nylon in the 1980s (a water-resistant fabric that women dared not wear before Miuccia made it acceptable), the doyenne has an eclectic past. She studied political science and mime at university, spent years practicing as a mime at Teatro Politico, before joining the Italian Communist Party. The thing that has always endured? For the iconic designer, fashion has always been her means of ammunition.

She married fashion entrepreneur Patrizio Bertelli in 1987, and together transformed what was a small fashion line for Milan’s elite founded by Miuccia’s father Mario Prada in 1913, into a global empire. The duo focused on designs that transmitted new notions of glamour and elegance, focusing on tasteful and modest collections that offered a new type of sex appeal made up of muted and basic colours, luxe fabric and beautiful tailoring.

Challenging the preconceived ideas of women and luxury, the Italian trailblazer promises this: a woman who wears Prada, is a woman who cannot be ignored. And Prada is exactly that, a luxury brand that encourages women to wear whatever they want with confidence.