Bubble Tent founders established the company a year ago and within a few days, the clear dome accommodation was entirely booked out eight months in advance. 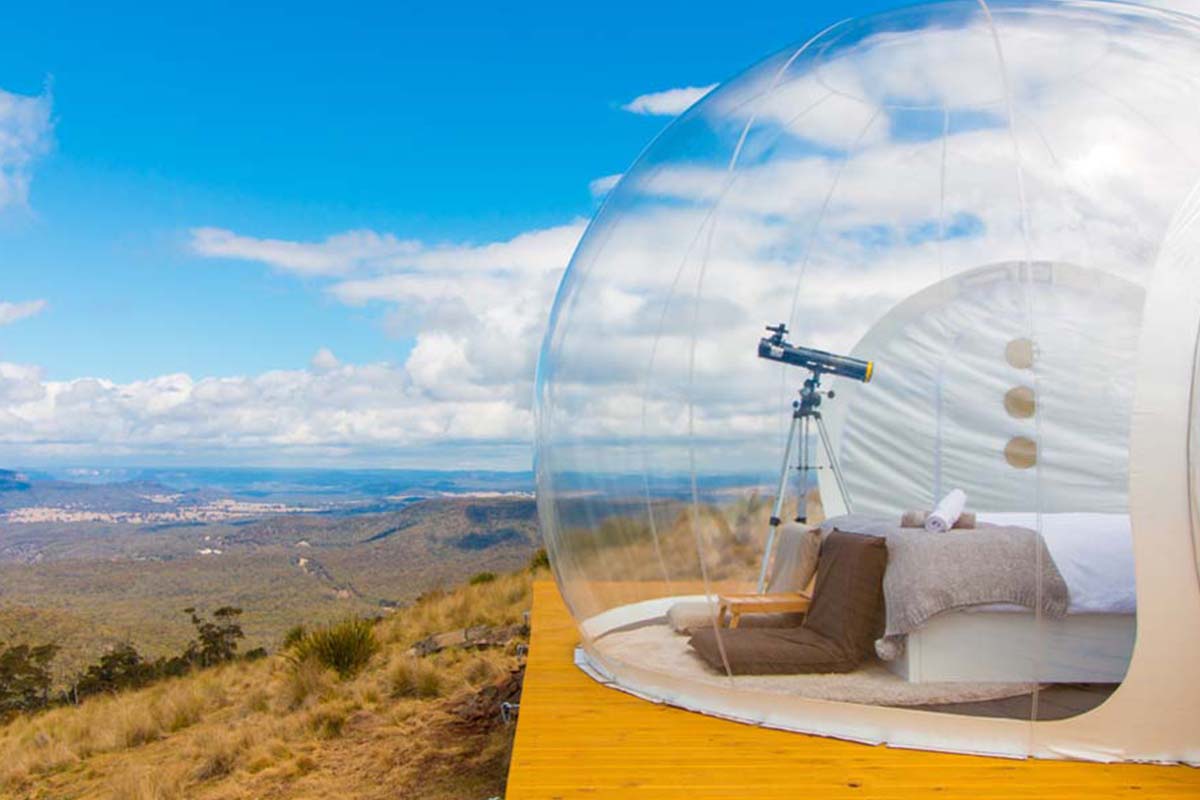 Escape the daily grind by sleeping under the stars without sacrificing the comfort of a grand bed and luxury duvet, encased by a transparent dome hidden in a secret location across regional Australia.

Although it may seem like a whimsical dream, a romantic sphere for people to escape reality in the world’s widest canyon, Capertree Valley, is a simple concept nurtured into a thriving success story by founders Sonny Vrebac and Mayu Iwasaki.

The ambitious couple sealed their fate after stumbling across a mind-blowing experience while on holiday at Lake Tekapo in New Zealand, inspiring them to create Bubble Tent – an Australian-first glamping adventure.

“We were completely enamored with it. First thing I wanted to do was sleep under the stars,” Vrebac told The CEO Magazine. “It was like somebody switched on the heaven up above; there was not a breath of wind (and) there was a meteor shower.”

Wanting to recreate the “most profound experience of their lives” in their backyard, the pair set out on a 17-month journey to develop Bubble Tent, 200km from Sydney, New South Wales, after realising it would be too expensive to be kept a hobby.

“We had to turn it into a business, so we thought we had to pull the trigger on this idea and have a crack,” Vrebac says.

Within a month of starting the company with a solo tent, the company caught media attention and 48 hours after the first story was published, Bubble Tent was entirely booked out eight months in advance.

“We were completely enamored with it. First thing I wanted to do was sleep under the stars.” – Sonny Vrebac

The entrepreneurs realised they needed to add additional tents and talking points, including a Swedish hot tub, to meet the heavy demand which enabled them to trial different price points.

“As it turns out, price is not as much an issue as we thought,” Vrebac says. “There is no secret source or response. You scramble and figure it out as you go.

Vrebac believes the business model has been successful because of their uncompromising attention to detail to “complete the wow experience” combined with finding a hole in the market.

HOW DO BUBBLE TENTS WORK?
Essentially a blow-up tent, the clear domes are inflated by an electric pump which connects to the tent and runs periodically to keep air circulation flowing.
Made from PVC and PVC tarpaulin, the material is completely waterproof and fire retardant, protecting guests from the elements.

“It comes down to the industry of glamping resonating with people,” Vrebac says. “They’re so detached from nature, especially in Sydney where suburbs change from year to year. In some places you can’t even see the sunlight on the ground.

“We want to connect people with nature, especially millennials. They want a more wholesome experience and stargazing is a very romantic notion.”

Despite 15-hour days and constant alterations, the niche business owner told The CEO Magazine he was mindful of business realities and wanted to continue to create a product that guests could appreciate.

“Even when we get into the tent, wow, the novelty is far from lost on us.” – Vrebac

“The biggest challenge is not getting in our own way,” Vrebac says. “I think it’s so easy to get tired, sloppy, big headed and go off track. You have to keep your feet firmly on the ground.”

Sleeping in clear domes with a glittery star ceiling is a rare experience in Australia, with Bubble Tent being one of a kind in the country, and this enabled the founders to triple revenue expectations in the first year.

“It’s all happy little accidents and it has maintained momentum,” Vrebac says. “Our first adventure has worked in our favour and from a business perspective, we’re swimming our own race.”

Three Bubble tents – named Leo, Virgo and Cancer – are perched in remote locations across a secret property (with the address given on a need-to-know basis) 1100m above sea level with sprawling views of the Central Tablelands, NSW.

Everything from a floating bed, hammock, love swing hanging in a grand tree, outdoor wood-fired bath, outdoor shower, telescope and fire pit are fine considerations of the glamping site with the tents sitting atop rolling hills creating a “once-in-a-lifetime” experience.

The bubbles are complete with bathroom facilities, climate control and curated playlists to amplify the breathtaking cosmos show. If guests are lucky enough to witness a shooting star, the selected music marries nature’s ceiling of lights, making it feel as if they’re in the middle of an orchestra. It doesn’t get more luxurious than that.

“Our first adventure has worked in our favour and from a business perspective, we’re swimming our own race.” – Vrebac

“Even when we get into the tent, wow, the novelty is far from lost on us,” Vrebac tells The CEO Magazine.

“Not too sound too spiritual but it’s a special thing for people to choose us and get engaged here. We’ve had fantastic feedback, it warms our hearts.”

While the unique setup is novel for Australia, the romance of stargazing is not lost overseas. Dozens of bubble tent setups are plotted across far flung corners of the planet.

Vrebac says they gathered inspiration from glamping enterprises worldwide and were confident the concept worked. However, their business has “champagne problems”.

“It’s been quite overwhelming. When we think of where we thought we’d be and where we are now … keeping standards really high without dropping the ball is a challenge,” he says. “We have to cater to the demand and not allowing quality to slide is a constant battle.

“It’s been a fantastic journey. For some people their first idea works, for others it’s their 10th – it’s a game of numbers.”

Bubble tent destinations around the world

Buried deep in the wilderness of Northern Ireland lay forest bubble domes allowing guests to gaze into their surrounds with transparent 180-degree walls. 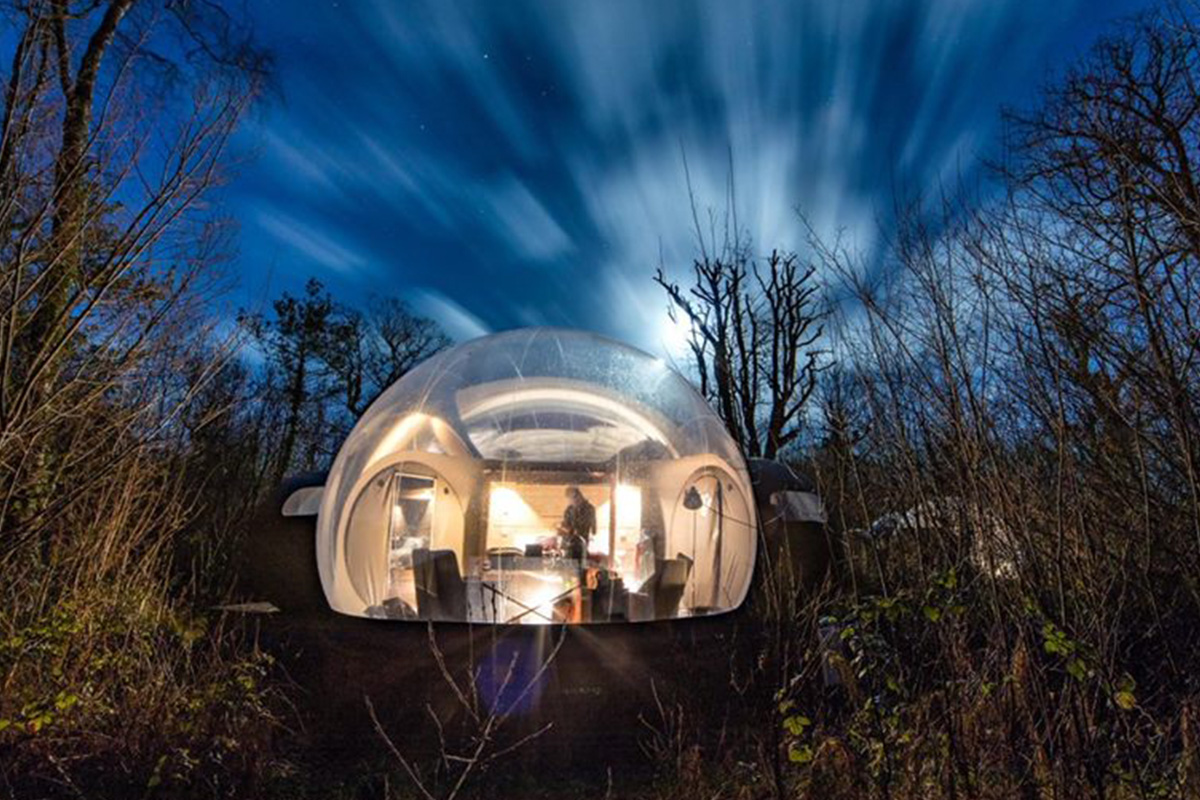 A gravel pathway winds through the luscious greenery to a private gateway opening up to a breathtaking destination, full of life’s little luxuries including Nespresso coffee, sprawling beds, traditional wing chairs and a telescope.

With a wooden floor, four-post bed and power outlets, it’s hard to imagine camping any other way.

Whether you want a romantic getaway or to spend a night stargazing, the spherical structure is the perfect escape, allowing you to completely immerse yourself in nature.

Promising to turn your childhood dream of sleeping under the stars into a reality, Iceland’s iconic bubble resort won’t disappoint.

Touted the five-million-star hotel , Buubble guests can immerse themselves in the stark wilderness and ogle at the astonishing northern lights’ aurora borealis dance. 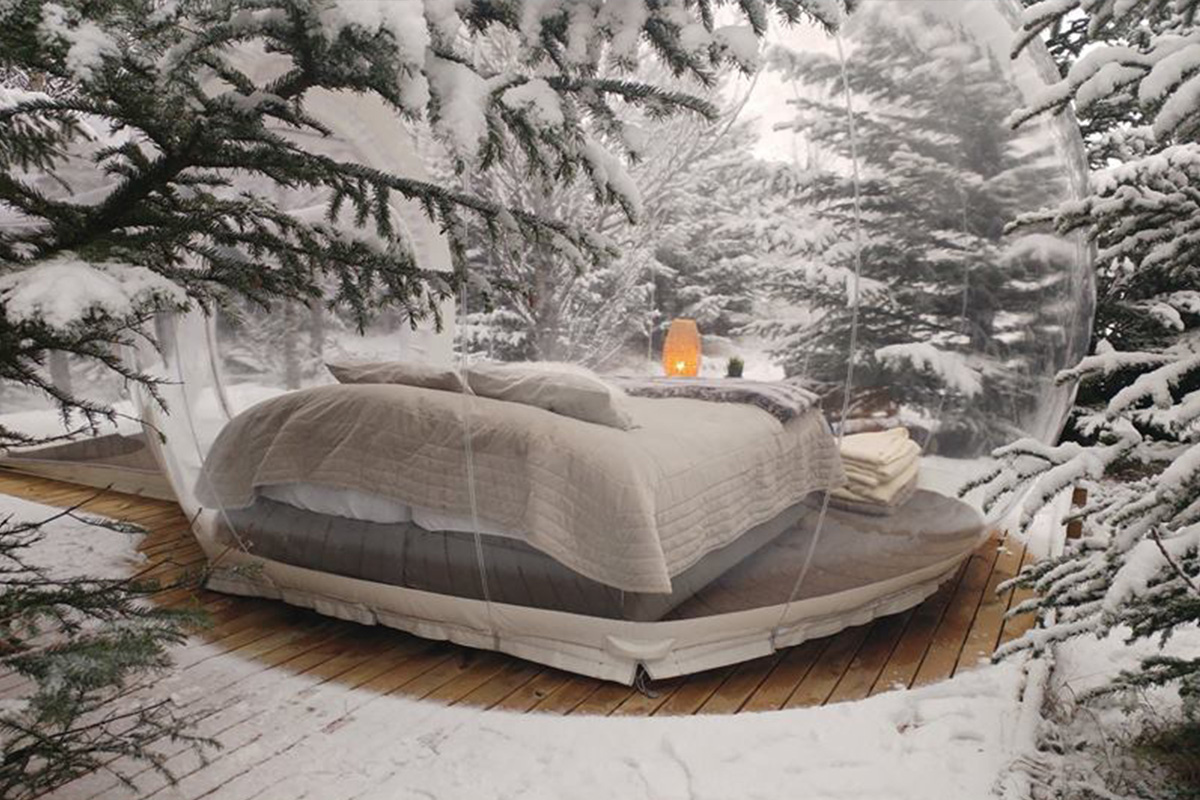 Explore Iceland’s mesmerising hinterland, embracing the magic of uninterrupted views of the northern lights with the bubble’s welcome protection from the elements.

With temperatures dropping to -10°C in the dead of winter, a thermostat will allow you to stay snug as you enjoy nature’s wonderland.

In summer, when the northern lights have vanished from sight, you’ll be able to marvel at the midnight sun.

For guests at Attrap Rêves, sleeping under the stars and observing the Milky Way is a one-of-a-kind experience where luxury is not sacrificed. 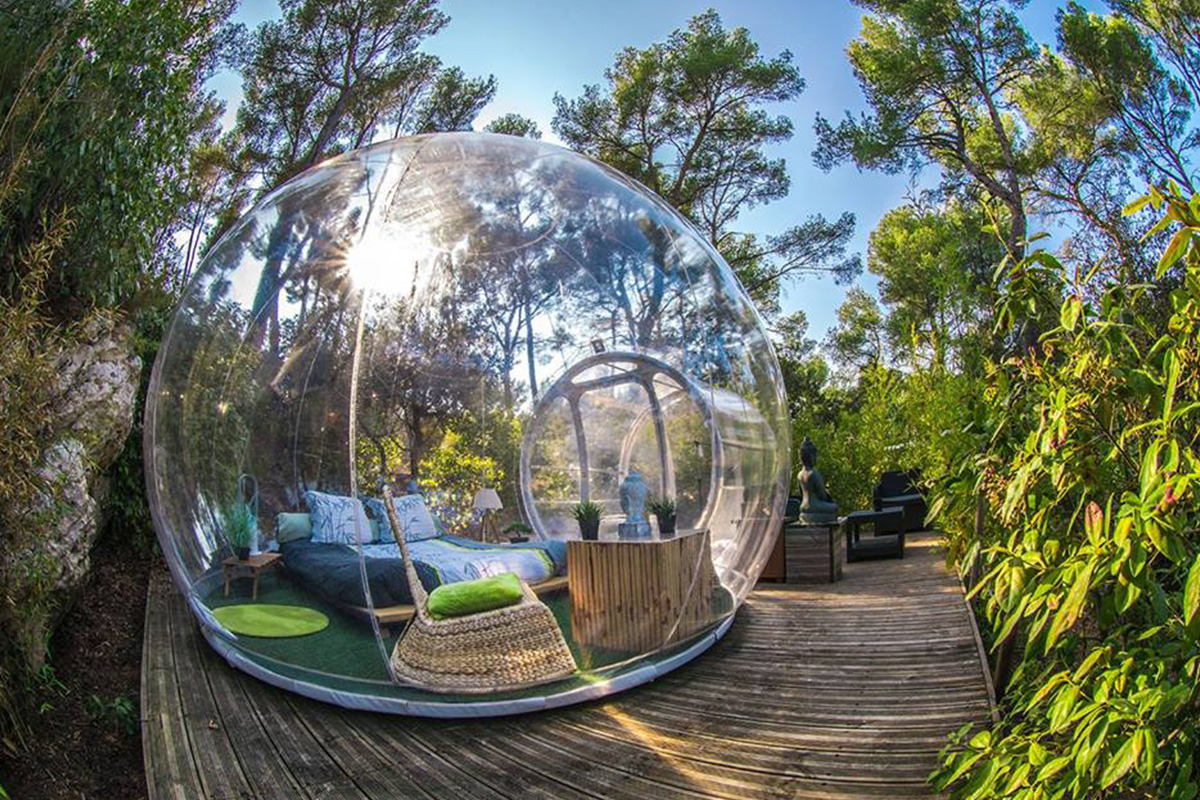 Through the protection of a secluded bubble, you can lap up the French wilderness without being attacked by small flying insects.

Whether you’re a solo traveller or seeking a romantic getaway, the tents are named after every desired ambience including zen, lov’nid and glamour.

With champagne tasting, complimentary breakfast and breathtaking views of the French Alps, you would be forgiven for forgetting you were camping under the stars. 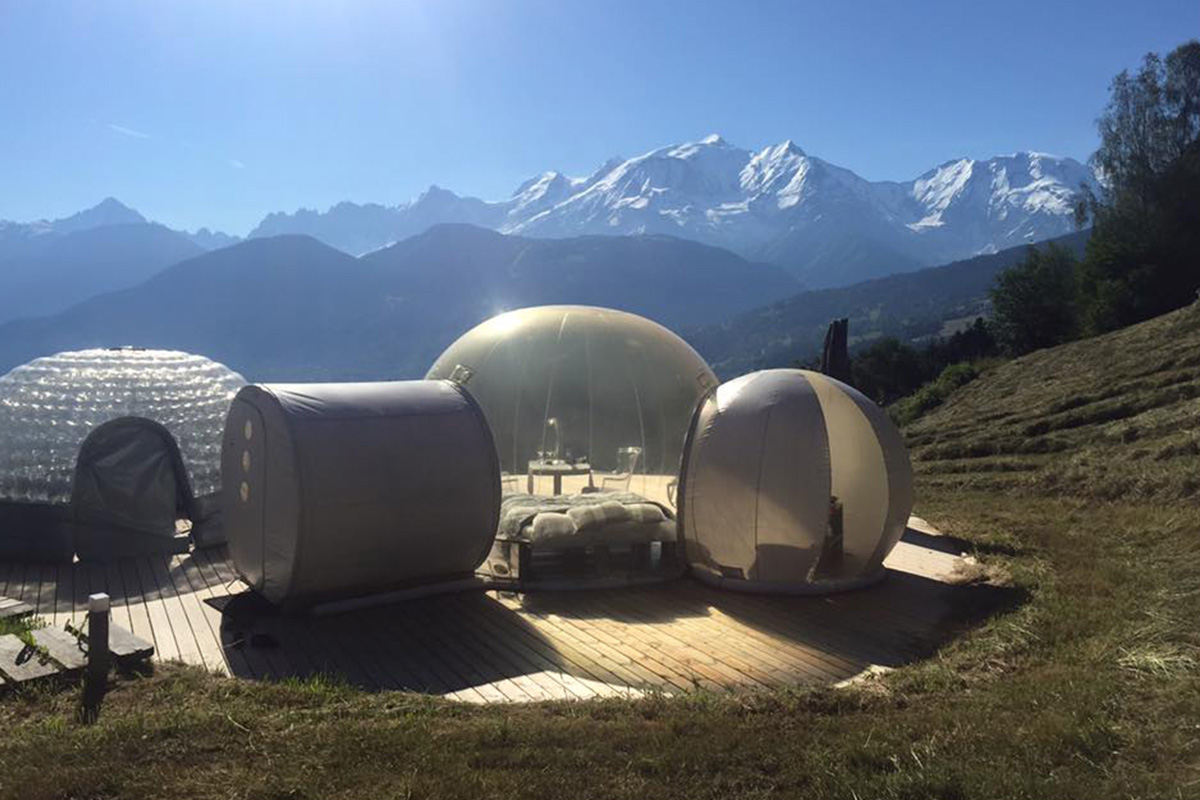 Possibly one of the most extravagant ‘sleep under the stars’ experiences in the world, Nuit Nature will dazzle with designer furniture and stunning sunsets over Mont-Blanc.

After arriving to a grassy field surrounded by trees, enjoy a glass of bubbles to the tune of owls calling in the distance and watch the sun set, or take in breathtaking scenery through tumbling snowflakes and discover a winter wonderland in the cooler months.