Trio behind Rekorderlig reveals new sector expected to hit US$14.5 billion by 2027

How Saintly Hard Seltzer is bubbling up in an industry already predicted to be worth billions. 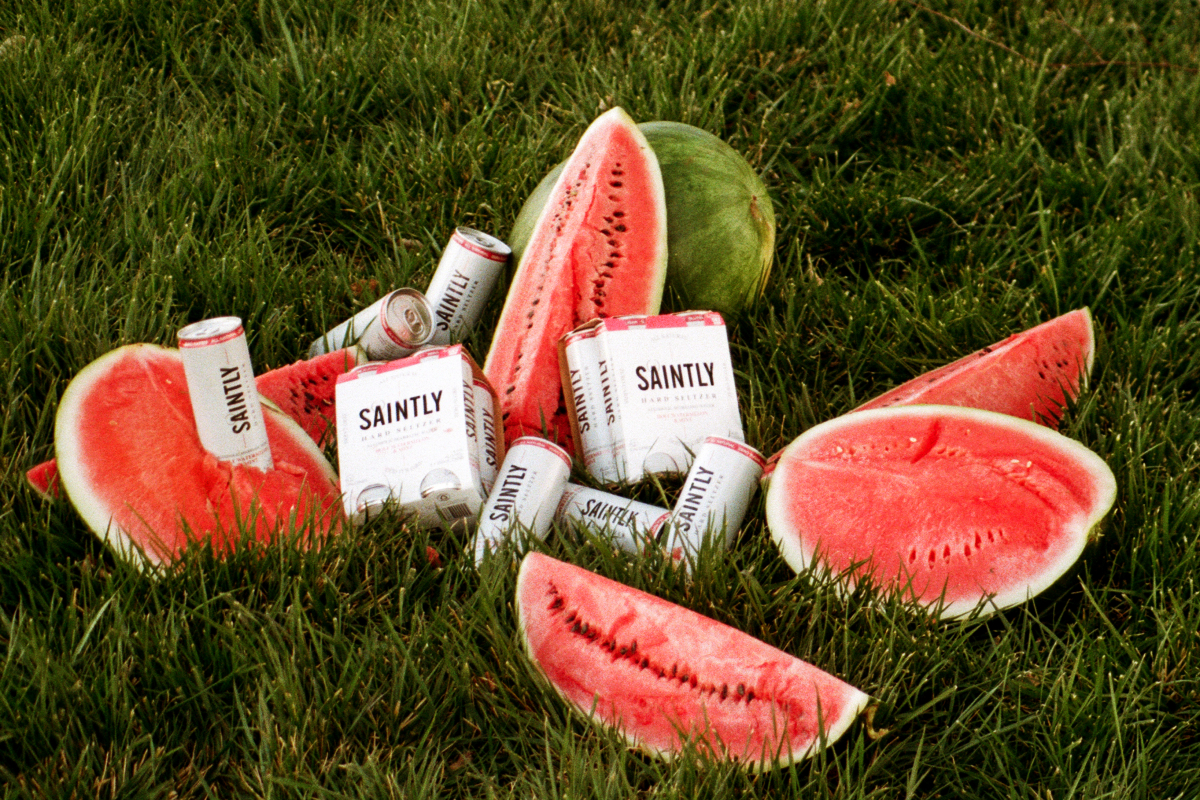 You’d be hard pressed to find someone who hasn’t heard of Rekorderlig. And the men who shared the taste of cider with the world have launched their latest venture – hard seltzer brand Saintly.

But just one month before Kieron Barton, his brother Christian and business partner Gareth Whittle were set to launch Saintly at the start of 2020, they faced an extraordinary, life-threatening situation in Alaska.

Flying in from all corners of the globe, the trio and a handful of close friends set off for a beginners’ snowmobile ride through the winter wonderland, with promises of glaciers and mesmerising landscapes.

“We heard the weather had been bad, but it turns out it was the worst snow they’d had in 50 years,” Kieron tells The CEO Magazine. “It was absolutely freezing. It dropped down to –46 when we set off.

“After an hour, not that we knew this [at the time], but the guides’ navigation equipment had frozen. It was basically leading us blind and we were essentially lost in the wilderness in the hills and mountains of Alaska.

“We tried to phone in for a helicopter from the US Army, but they couldn’t come and rescue us because the helicopter couldn’t take off let alone land in that weather – it would have just crashed.

“We were meant to be out for seven hours, but we were out there for 16.” 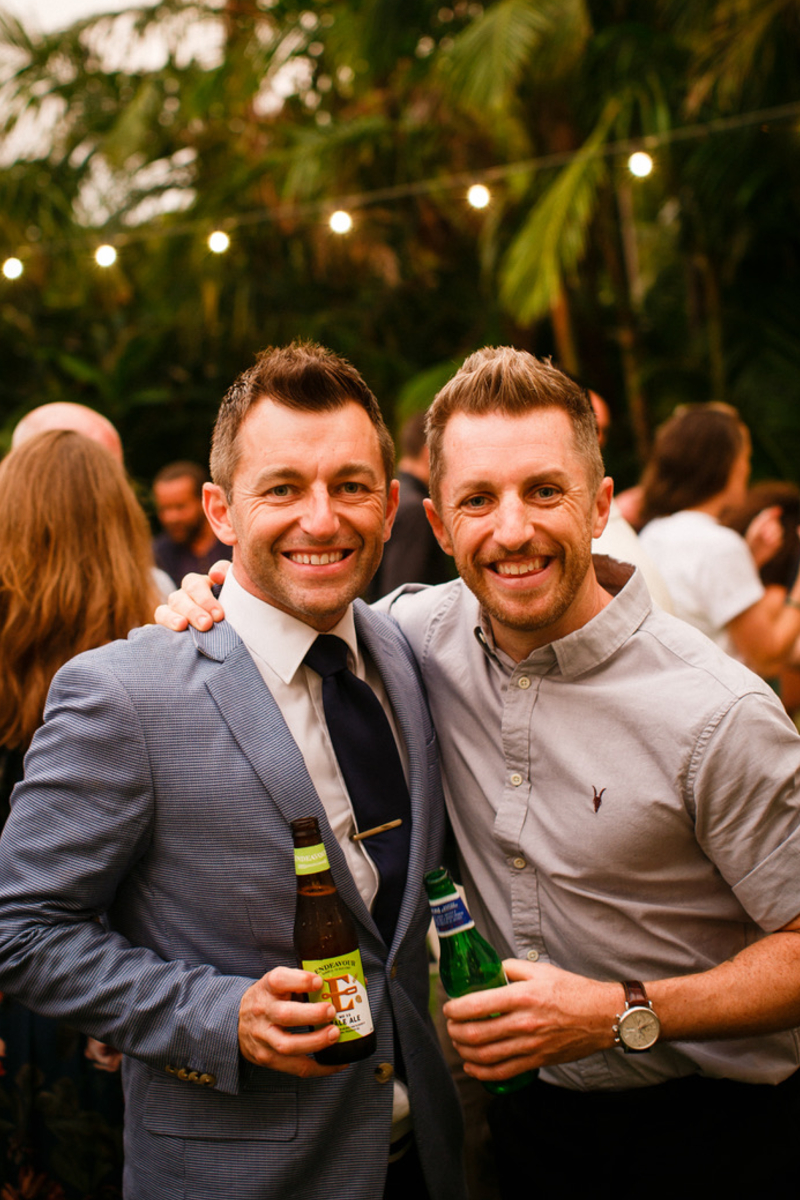 After hours of their snowmobiles bogging in the snow while also fighting the debilitating effects of frostbite, their rescuers pinpointed their location through GPS coordinates on the satellite.

“By that point … our eyes had frozen over; you had to peel your eyes open,” Kieron recalls. “The powder was up to your neck deep.

“My friend had terrible frostbite through his toes, another with his hand. Some of us have lost feelings in toes and fingers. My friend had two of his fingers amputated.

“My business partner, he slipped through ice and went in water below – his boots were literally frozen solid to his feet.”

Finally brought to the safety of a lodge at 1.30am, Kieron remembers about 20 friendly faces waiting to help them.

“We got off these machines, ran in [to the lodge] – our helmets were frozen solid to our head and we were trying to rip them off because we felt claustrophobic,” he shares.

Experiencing the extraordinarily dangerous situation compelled Kieron and his mates to harness their utmost resilience and dig deeper than ever before.

“Life flashed before you,” he shares emotionally. “Everyone had a similar sort of experience, thinking we were going to die. 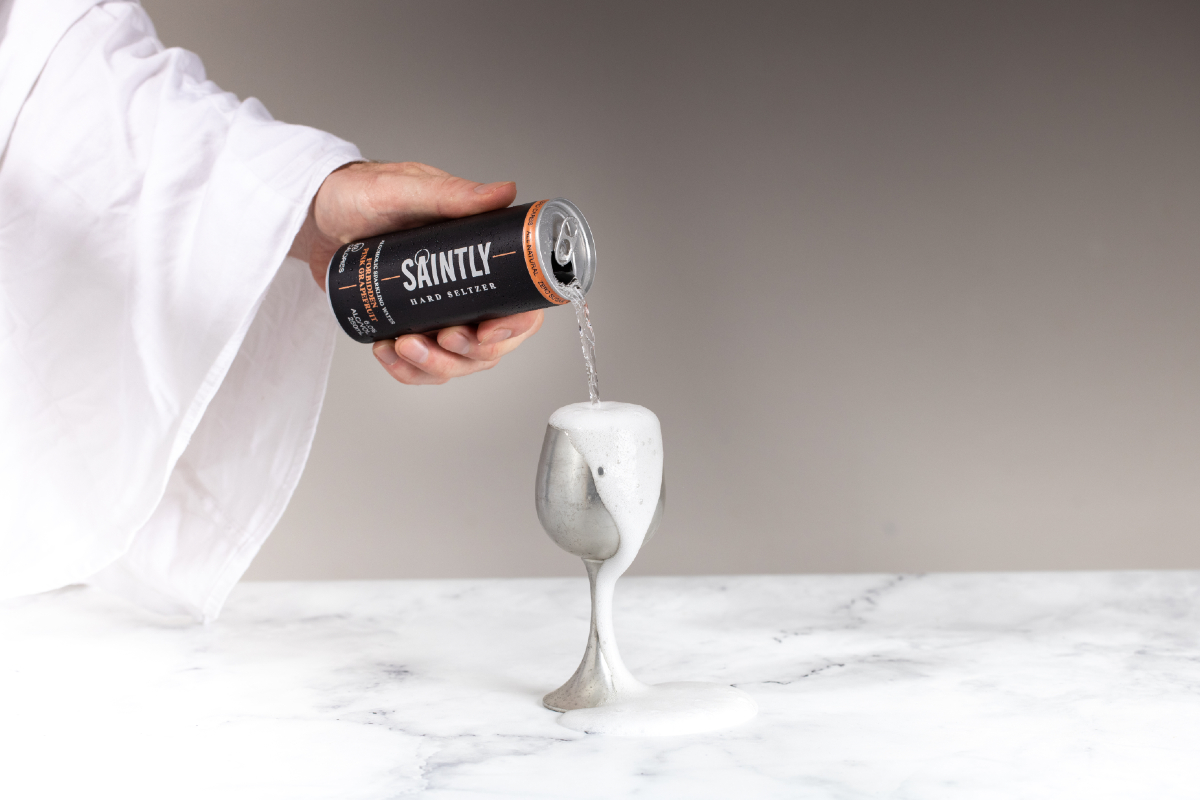 That same determination and admirable strength brought the trio full circle, first leading the business partners to their inaugural success with Rekorderlig, and now with their coincidently yet appropriately named hard seltzer brand – Saintly.

Not only did Kieron and his team survive a horrific near-death experience in the treacherous Alaskan wilderness but they returned to Australia three days before the country shut its borders in the fight against COVID-19.

“It was a massive time,” he shares. “It all came literally when we were getting answers back from liquor stores about launching the product.”

“I think it’ll become bigger than the cider category within 18 months.” – Kieron Barton

A true business blessing, Saintly was the golden “miracle” the co-founder needed to put him back on track.

“It massively re-energised me as a person,” Kieron says. “Working on this new project and new category, I feel excited by it and where it can go to.

“It’s hitting the same numbers for us as the cider brand when we first launched and that’s gone off to great successes.”

If industry trends are anything to go by, the hard seltzer brand has a fortuitous future.

“I think it’ll become bigger than the cider category within 18 months,” Kieron predicts. “A hard seltzer brand was advertised at the Super Bowl, and that’s a US$5 million spot to advertise; you don’t just do that unless a category has become something massive. It’s huge in the US, and it’s going to become really big over here [in Australia].”

Recognising the signposts of a bubbling brand, Kieron is noticing similar, if not more positive, trends within the burgeoning category.

“We experienced that sort of boom with cider as well years ago when we launched Rekorderlig,” he explains. “Cider went from under half a per cent of total liquor to about three per cent total liquor.

“I think hard seltzer is on a quicker ride than that.”

What is hard seltzer? 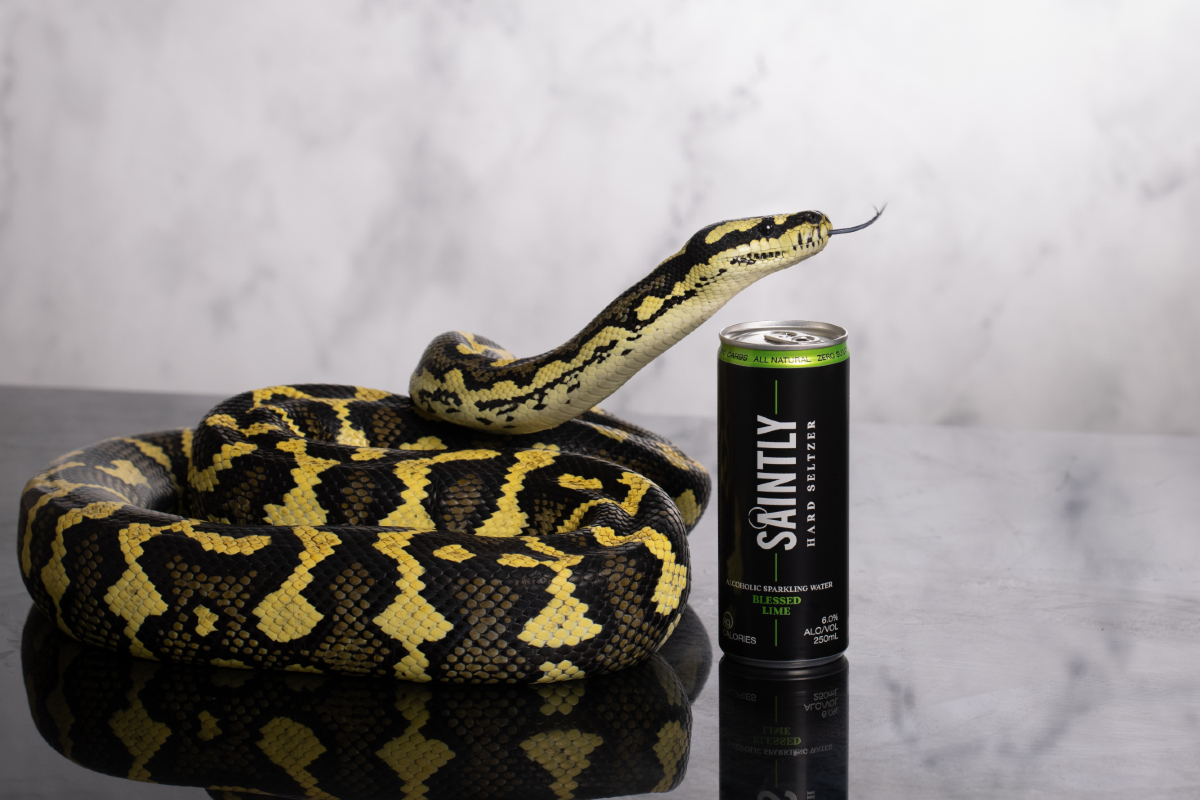 Invented as an alternative to beer by Nick Shields in 2012, hard seltzer is, quite simply, alcoholic sparkling water: hard referring to alcohol, seltzer meaning sparkling.

Hard seltzer commercialisation took off in 2019 due to its affordability and gender-neutral appeal.

Inspired by their own international travels, Kieron says it was just four years ago when he started noticing hard seltzer brands popping up.

“In taste maker areas like Venice Beach or Manchester near the Northern Quarter, you see where things are beginning to change,” he says. “We looked at the trends, looked at what’s happening, and foresaw this could be the next type of craft beer sector, because that’s what it’s become in the US. It’s become phenomenal.”

Made from fermented cane sugar, Saintly hard seltzer has no sugar, no carbohydrates and is entirely natural. Dubbed a saintly beverage, it has fewer adverse effects on overall wellness compared to traditional alcoholic drinks.

“Australia is quite a leader in this thing worldwide in terms of health and wellness,” Kieron explains. “People are looking at clean eating, health, wellness. They want to consume better things, be it food or around clothing.

“I don’t think something like hard seltzers is going to come and go. We’ve got a job on our hands, clearly, but I’m confident we can do it.”

The biggest priority for Saintly was mastering taste – a huge responsibility that largely fell in the hands of Christian, being a former cocktail bartender from the UK. 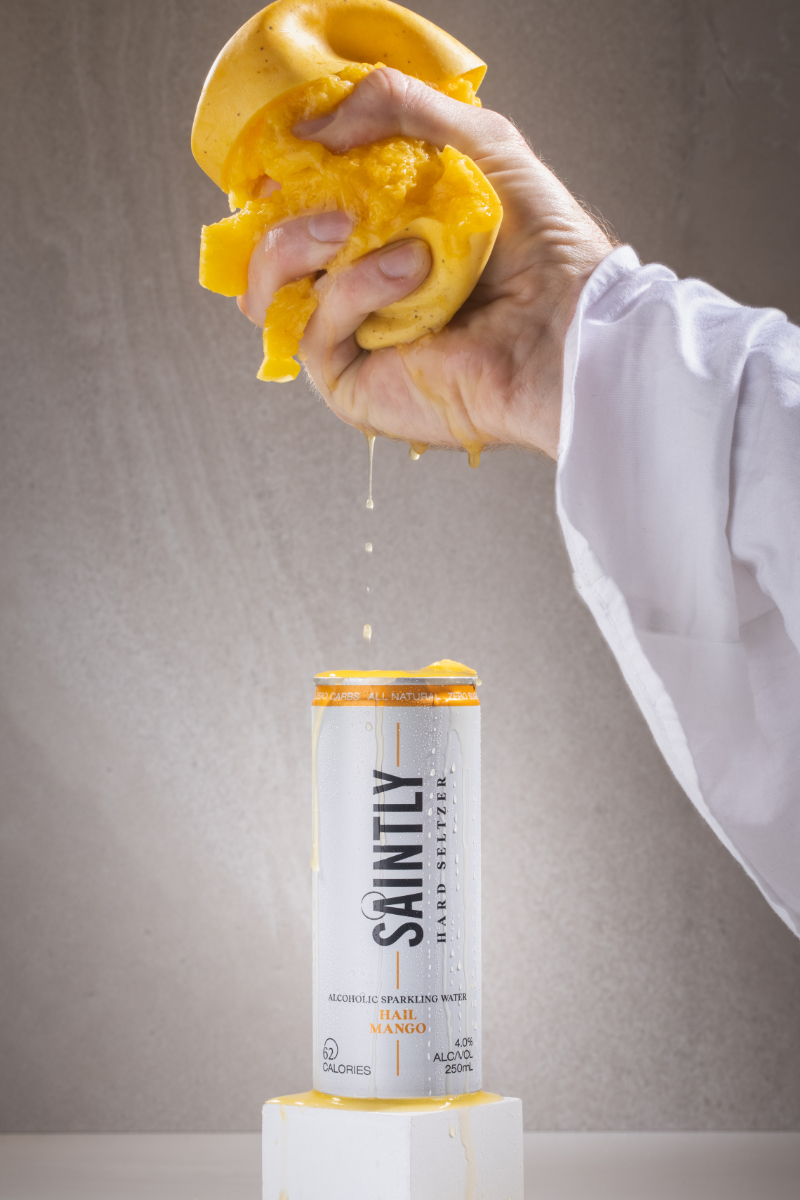 “He was just absolutely driven on putting together an incredible tasting product for us and went back again and again and again to make it perfect for us,” Kieron explains. “The whole experience of drinking it is that you’re drinking something that’s better for you, but it absolutely delivers.”

Health is also leading the charge behind how often alcohol is consumed.

In Australia alone, young people aged between 18–24 are drinking about 20 per cent less than the same age group 10 years ago.

“Overall consumption in alcohol has dropped in liquor, but I think people are just making more informed choices,” Kieron says. “Instead of drinking three nights a week they’re drinking one and a half nights, but they’re choosing products that fit more with a health and wellness type angle. Seltzers obviously play well into that.”

Having spent much of 2019 pitching to retailers and finessing the brand, Saintly was launched in August 2020 – a few months later than initially planned because of the pandemic.

“We were certainly amongst the first,” Kieron says. “It was us and a few others that launched and a few more have come along now, which is great.

“If you’re building a new category, you want a number of different new brands at once. You need to have a presence at a retail store otherwise it’s hard for a consumer to find it.”

Clocking up 17 years of experience after co-founding Chilli Marketing, the trio has a keen eye for spotting the potential of a brand.

“At different times, things have come along that change you from being reckless to driven, determined, more strategic.” – Kieron Barton

After discovering Rekorderlig and introducing it to several markets in 2010, the Chilli team built the fourth-generation family-owned Swedish cider company into a global top 10 cider brand out of Australia.

“If Saintly becomes bigger than Rekorderlig, that will be amazing,” Kieron tells The CEO Magazine. “From everything that I’m seeing so far, it’s got every chance of at least equalling it in size. I just don’t see this trend going away.” 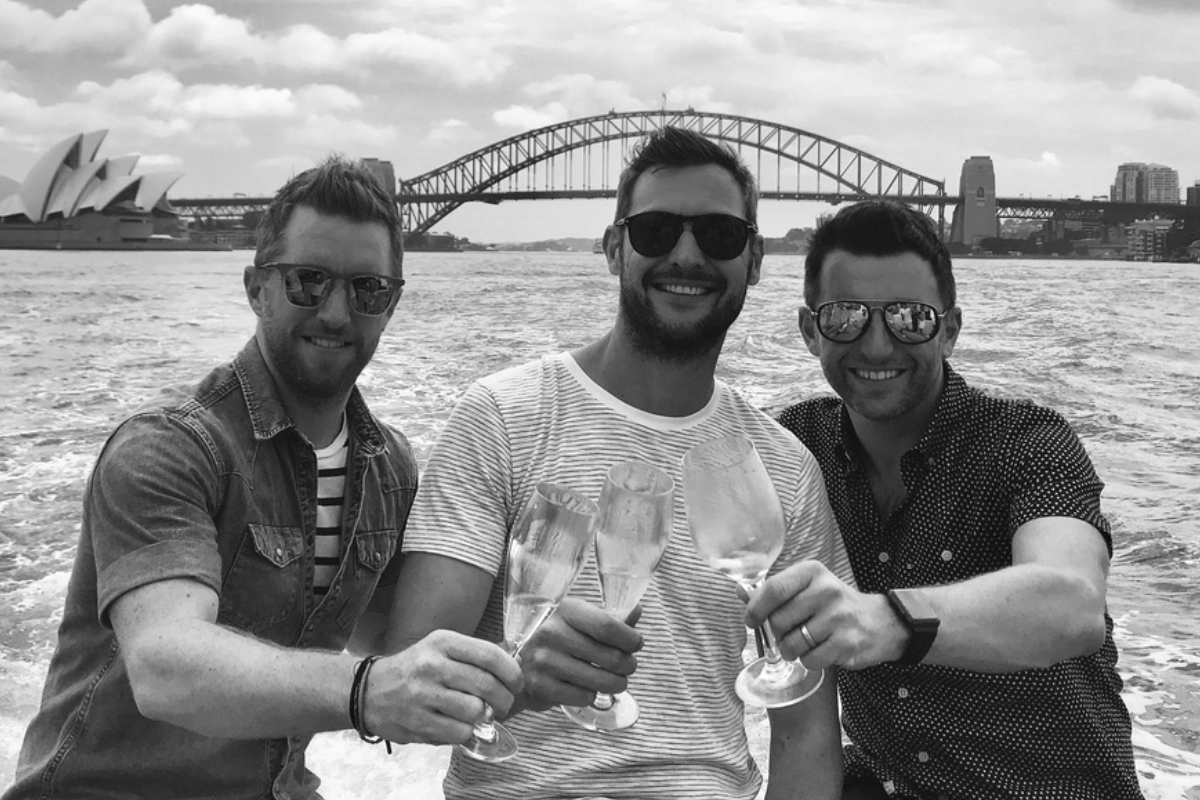 They say resilience isn’t something you’re born with – but it certainly seems Kieron was.

When he was a junior working in a bank, the budding entrepreneur was held at gun point. As events unfolded, it was revealed to be a pretend gun; however, it didn’t make the situation any less terrifying.

“We had to learn lessons and learn quickly, act differently,” Kieron recalls. “At different times, things have come along that change you from being reckless to driven, determined, more strategic.”

Chilli Marketing was born in the back room of a terrace house in Manchester, UK, on the concept of Kieron and his friend delivering beer to the bars they liked and to where the footballers were seen.

“Ultimately, it’s been an amazing 17 years and I just feel like we’re on the cusp of something new and exciting again with Saintly.”

Any success during a pandemic is notable. But founding a brand, pioneering a new market category, riding the waves of the COVID-19 crisis and surviving a near-death experience is utterly awe-inspiring.

Even more commendable, the group hasn’t let the Alaskan calamity define their lives.

“Everyone has gone on and done things,” Kieron says. “Two of them did the virtual New York marathon having both been told they would have lost toes. The guy that lost his fingers has done a triathlon.

“Everyone had this moment … we had this fight inside of us. We’re lucky to be alive. We’re celebrating being alive and doing as much as we can.”

Shaped by the events you would only imagine happening to a character in a Hollywood film, adaptability and strength have been the businessman’s biggest takeaways in both business and life.

“When one was down, there were others around you to pick you up. It was equally a good story of mateship,” Kieron says. “It’s resilience, and knowing we’re not always going to be in this state forever.

“We can’t just stop. There’s light at the end of the tunnel.”