From high-school dropout to billionaire businessman, Sir Richard Branson has forged a whirlwind path to success with his Virgin Group conglomerate. 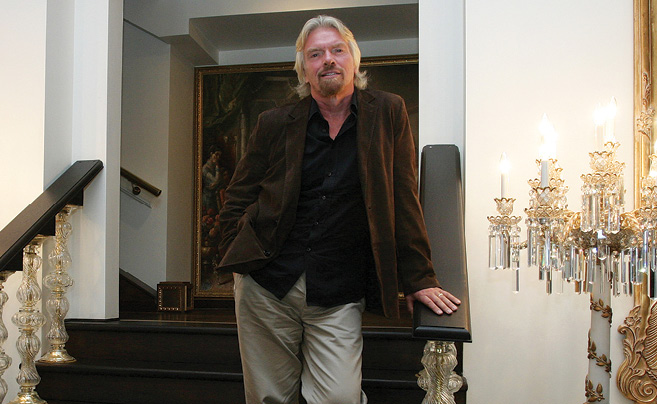 To Sir Richard Branson, nothing is impossible. No task is too challenging, no dream too big, and if the idea is there, then it has the potential to happen, and to be a success. From launching a music company in the 70s to a more recent venture into space tourism, the entrepreneurial mind of Richard is always ticking and proving to the world that limits are there to be pushed.

Richard was born in England in 1950 to a barrister father and an air hostess mother. Growing up, school was a struggle; he had dyslexia, despite which, he wanted to be a journalist or an editor.

At age 16 Richard approached his parents about leaving school to launch a magazine. Unsurprisingly, his dad was initially against it the idea, but—always someone of influence—Richard managed to change his mind.

With the support of his parents, he launched a youth-culture magazine called Student in 1968, and managed to sell a significant amount of advertising to feature in its first issue, which funded a print run of 50,000 copies and allowed for free dissemination.

A year later—living in London and surrounded by the British music scene—he had his next great idea. Unforeseen by him at the time, this would be the catalyst for his future success. He began a mail-order discount and import record retail company to help pay for his publishing efforts. This provided enough income for him to expand, and he opened a shopfront on Oxford Street. As business steadily picked up, he added 13 additional stores and a residential recording studio to his asset portfolio. He called it The Manor, and signed Mike Oldfield, a progressive rock musician, to the label. The single ‘Tubular Bells’ was released, and it quickly garnered an enthusiastic fan base. Virgin went on to sign on a bevy of up-and-coming bands including The Rolling Stones, Sex Pistols, Culture Club, and Genesis. It eventually grew to become 1 of the top 6 record companies in the world.

Things snowballed from there as Richard steadily grew and expanded the Virgin brand. Today, it reaches across many different sectors, from travel and leisure to telecommunications and health. Virgin owns and operates gyms, casinos, airlines, wine stores, and hotels, all of which have a huge and loyal following. In 2004, Richard launched Virgin Galactic — arguably his most ambitious project to date.

Through partnerships with several organisations, a team of rocket scientists, engineers, and designers have been brought together with the task of developing the world’s first commercial space line. This will ultimately provide suborbital space flights to space tourists, suborbital launches for space science missions, and orbital launches of small satellites. “Space will be transformed for the better,” Richard told The CEO Magazine mid last year. “There are extraordinary, exciting things ahead.”

However, as with all great successes there are great challenges. Richard— despite all his wide-spanning achievements—has not been immune to this. In 1992, his music business Virgin Records was running at a loss and there was no choice but to sell up. He was bought out by Thorn EMI for US$1 billion. He told Reuters in 2013, at the fortieth anniversary of the sale, that “it was very hard—like selling your children”.

“I mean, you build something from scratch; we had just signed Janet Jackson, we had just signed The Rolling Stones when we sold it, and I remember running down Ladbroke Grove, tears streaming down my face, with the cheque for a billion dollars.”

Determined to stay in the music game, he founded Virgin Radio in the UK soon after in 1993. The national station has since grown to become one of the largest international commercial radio groups globally, generating annual revenues of approximately US$120 million.

Richard’s go-getter attitude hasn’t just been applied to his business life either. He is well known for his courageous sporting achievements, including his record-breaking Atlantic Ocean crossing in the Virgin Atlantic Challenger II in 1986, and his journey as the first-ever person to cross the Atlantic by hot-air balloon in 1987, which he followed up with a crossing of the Pacific in 1991.

Richard’s self-made billion-dollar fortune has seen him purchase two private islands, one off Australia’s Sunshine Coast and the other in the British Virgin Islands. The latter is called Necker Island, and in a blog post titled ‘How I bought Necker Island’, Richard tells the story behind it, revealing insights into his rebellious nature and inexhaustible energy.

“I had been madly trying to come up with a way to impress a girl I had fallen for, so I rang up the realtor and expressed my interest,” he writes. “We were still in the early days of Virgin Records, and I by no means had the cash to buy an island. Luckily, the realtor didn’t know this and offered me an all-expenses paid trip to see the islands that weekend. I agreed to go on one condition—if I could bring a guest. To my delight, the object of my affection agreed to join me on the trip. I fell in love twice that weekend: once as our helicopter — supplied by the realtor, of course! — swooped over the turquoise water and white sandy beaches of Necker Island, and again when I saw the smile on the face of the  beautiful girl who sat beside me on  the journey. Together, we strolled  around the island and dreamed up plans for turning it into a haven for musicians.

“Those dreams were quickly spoiled when the realtor quoted the ‘discounted’ asking price of US$6 million. Smitten with the unspoilt paradise, and keen to impress my new love, I offered the highest amount I could afford: US$100,000. As you can imagine, the realtor was less than impressed, and left us high and dry to find our own way back home.

“A year later, a charming man named Derek Dunlop arrived at my houseboat in London and explained that nobody else had made an offer on Necker, and that the owner of the island was desperate to sell. Virgin Records was in a much better position than it had been a year before, so I quickly agreed to a purchase price of US$180,000. The only condition was that I would need to build a resort on the island within four years.

“That’s the story of how I bought Necker Island, and it also marks the origins of our luxury property portfolio, Virgin Limited Edition. As for the girl—I married her there 11 years later in front of all our family and friends and our two lovely children, Holly and Sam.”

A great interest of Richard’s is caring for the world around him. He is publicly vocal about the effects of global warming, the need to introduce cleaner energy sources, and he isn’t shy about his unbridled commitment to helping Mother Nature. Necker Island is used as a base to implement numerous sustainability and environmental initiatives. Ring-tailed lemurs are one of the animals in conservation on the island, after he recognised that they were being threatened by deforestation in their native Madagascar, as are the flamingos. In total, there are almost 150 different species of animals and birds calling the island home. Furthermore, he is working on a strategy to make the island energy independent so that there is no need to use diesel generators.

Outside of the island, Richard is involved in many philanthropic pursuits, providing humanitarian and environmental aid to various parts of the world. The Virgin Foundation was set up in 2004 to ignite sustainable change through economic development. It has programs to provide healthcare services and items to rural parts of Africa, clothing drives to support homeless and at-risk youth, and it raises much-needed funds for a plethora of charities and not-forprofit organisations.

Helping other entrepreneurs make their mark on the world is yet another strong passion of Richard’s. He has a financial subsidiary in the UK called Virgin StartUp, and he is often known to invite individuals and groups to his home on Necker Island where they are invited to pitch their ideas. In his book Screw It, Let’s Do it: Lessons in Life, he shares the best lesson that he ever learned as an aspiring entrepreneur: “Whatever your goal is, you will never succeed unless you let go of your fears and f ly … Just do it. It doesn’t matter what it is, or how hard it might seem, as the ancient Greek Plato said, ‘The beginning is the most important part of any work’.”

Richard’s words of wisdom, as written in his memoir Losing My Virginity: How I’ve Survived, Had Fun, and Made a Fortune Doing Business My Way