The best of Australia’s business leaders have been honoured at The CEO Magazine’s 11th annual Executive of the Year Awards. We’re pleased to announce the award winners for 2022. 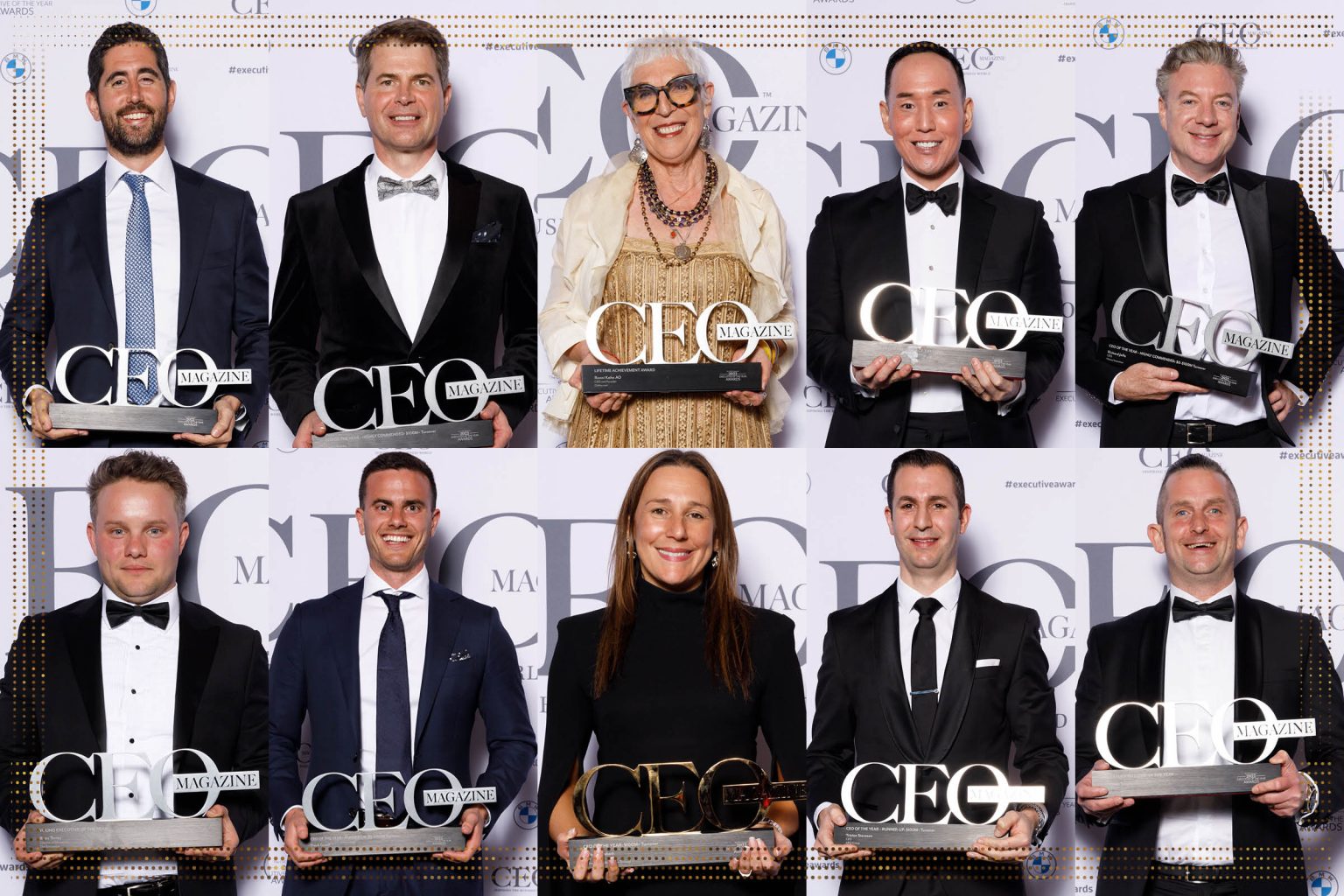 Has it been a year already? Well, no. Back in its comfortable end-of-year time slot after a virtual 2020 and a delayed 2021 (held last February), The CEO Magazine’s 2022 Executive of the Year Awards helped tie a big bow around the year that was.

Australia’s most prestigious business awards event was all too ready for prime time, with the country’s top executives gathering at Sydney’s Jones Bay Wharf to celebrate the industry’s best and brightest. This year’s Awards featured a streamlined list of categories when compared with previous events, which only served to shine a brighter spotlight on the winners.

And the competition was tighter than ever, with the judging panel – themselves no strangers to success – spoiled for choice. The guest judges for 2022 were Shaun Bonétt, Precision Group CEO and Managing Director; John Karagounis, The CEO Circle Managing Director and CEO; Simone Tilley, ANZ General Manager Corporate Bank; Jannine Fraser, Directioneering Co-Founder; and The CEO Magazine’s own CEO David Jepson, Co-Founder Chris Dutton and Co-Founder and Executive Director Anna Dutton.

We’d like to thank this year’s sponsors, including BMW, Prezzee, Addicted to Maldives, The Leadership Institute, The CEO Circle, AS White Global and Work Club Global for their support. 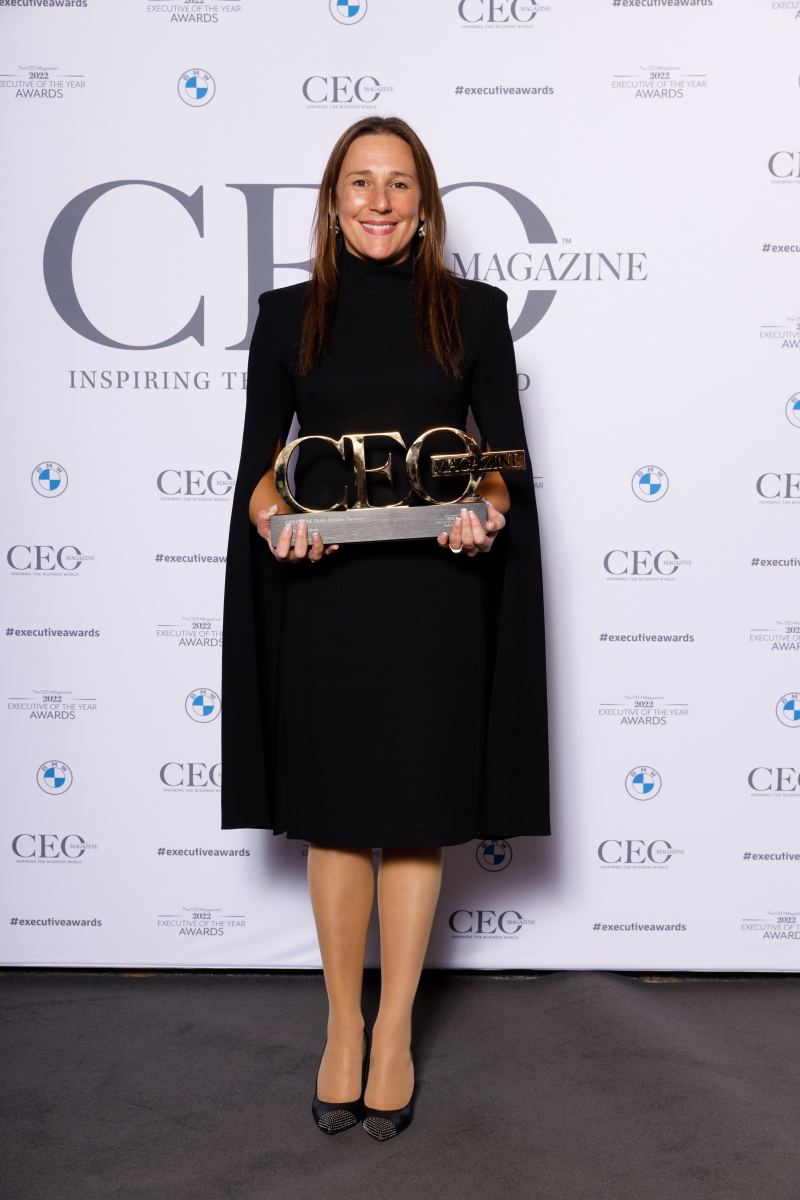 CEO and Managing Director, Unilever Australia and New Zealand
From FMCG to retail, from lux to ecommerce, Nicky Sparshott is a purpose-led leader. Throughout her 27 years at various companies, including George Patterson Y&R, Procter & Gamble and The Coca-Cola Company, she has always kept a solid focus on profit, planet and people. As Chief Energy Officer, she’s brought that philosophy to Unilever ANZ with great success, driving consistent and competitive profitable growth with a regenerative impact on local communities and the planet as a whole. 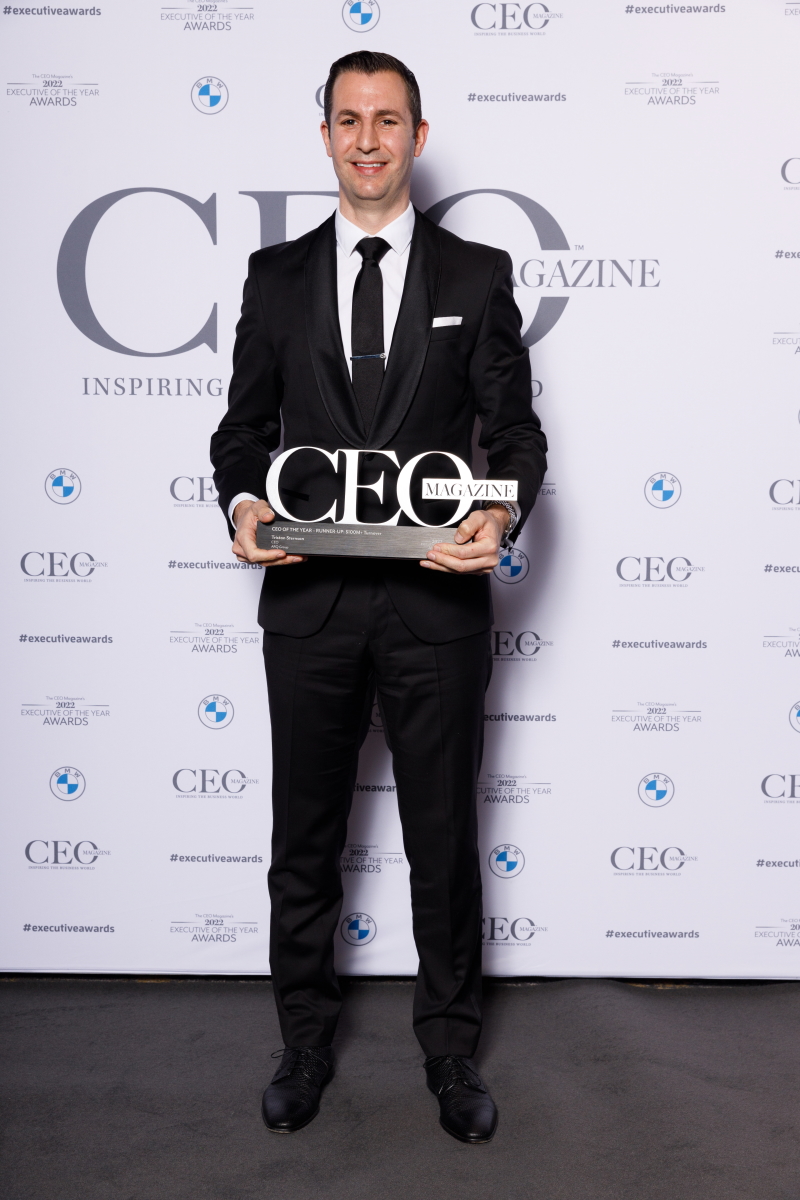 CEO, ARQ Group
Tech pioneer, growth expert and serial entrepreneur, Tristan Sternson joined ARQ Group in 2019. His work as CEO took the digital tech service provider from underperformer to the subject of a A$290 million acquisition in 2022, making it one of Australia’s greatest business turnarounds. 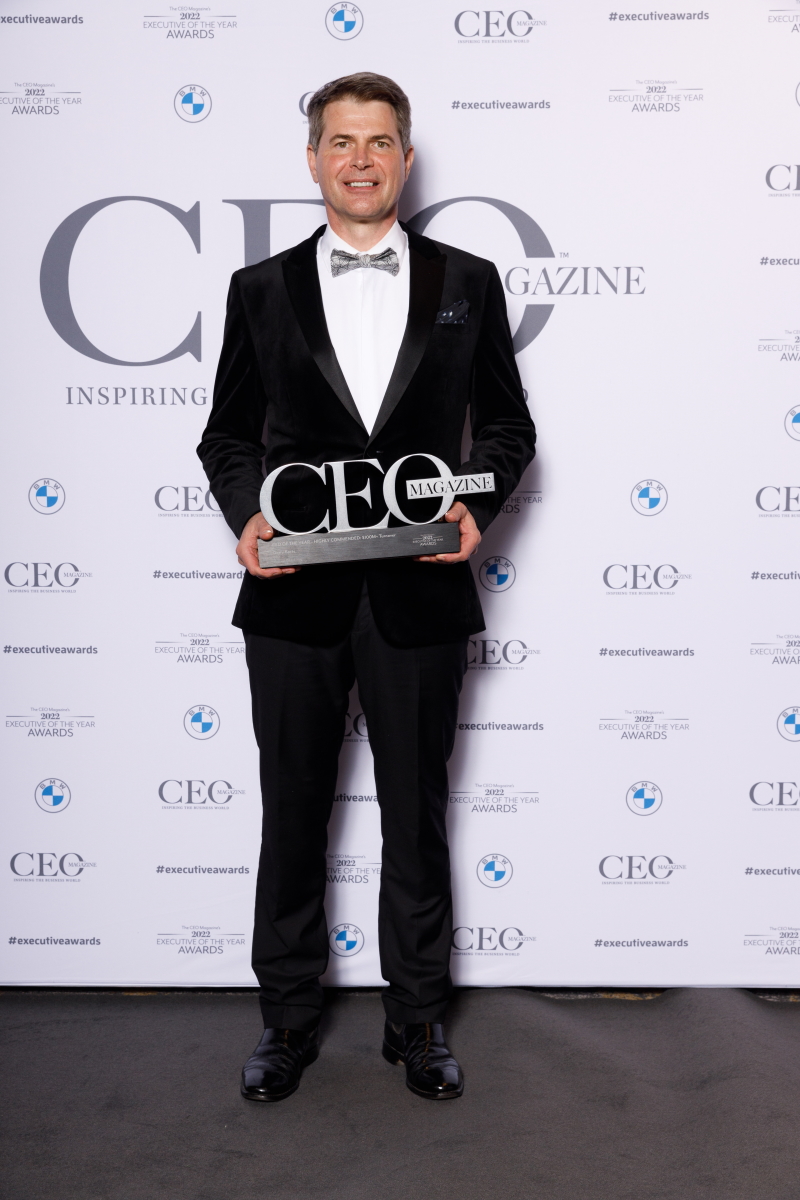 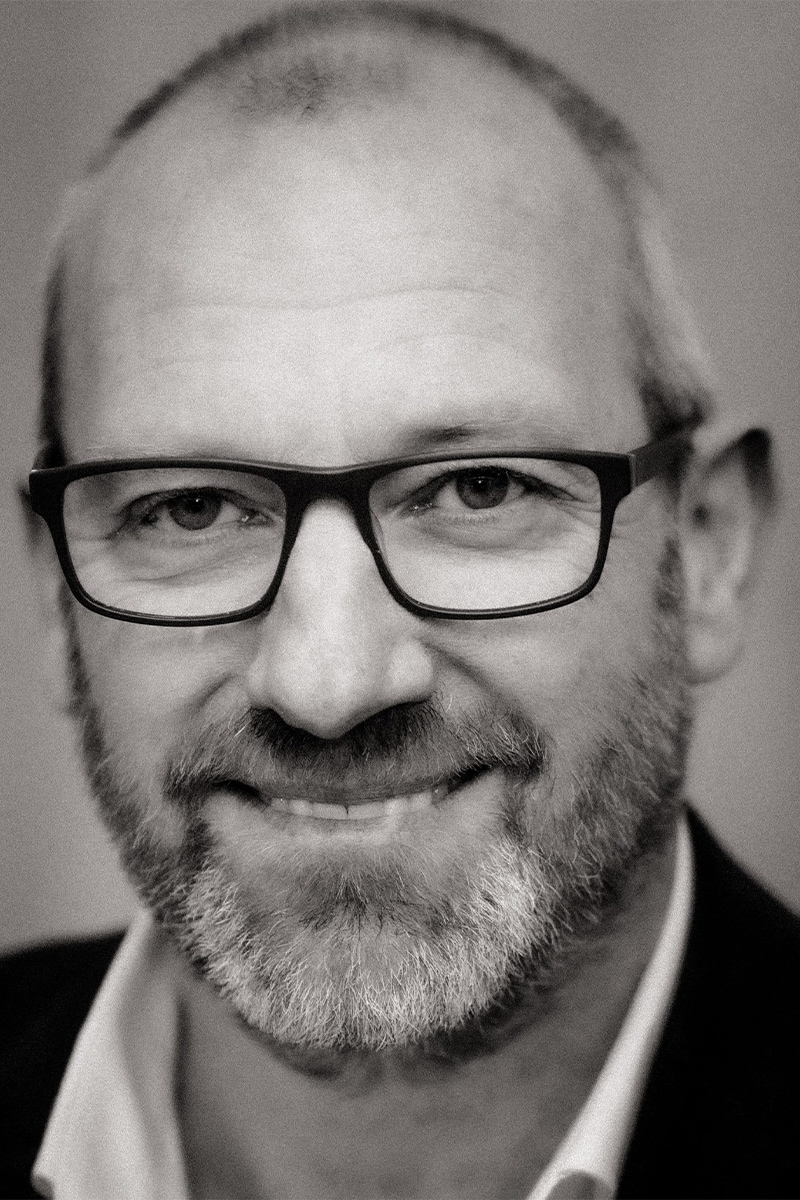 CEO, Stepping Stone House
A tireless champion of homeless and at-risk young people in Sydney, Jason Juretic has used his life experience to tackle the problem in creative new ways. As CEO of Stepping Stone House, he works to provide safe accommodation for homeless and at-risk young people with a dynamic mix of innovation and creativity. A former Royal Air Force pilot and tech executive, Juretic is a firm believer in for-purpose leadership and the importance of corporate social responsibility; his success in that regard speaks for itself. 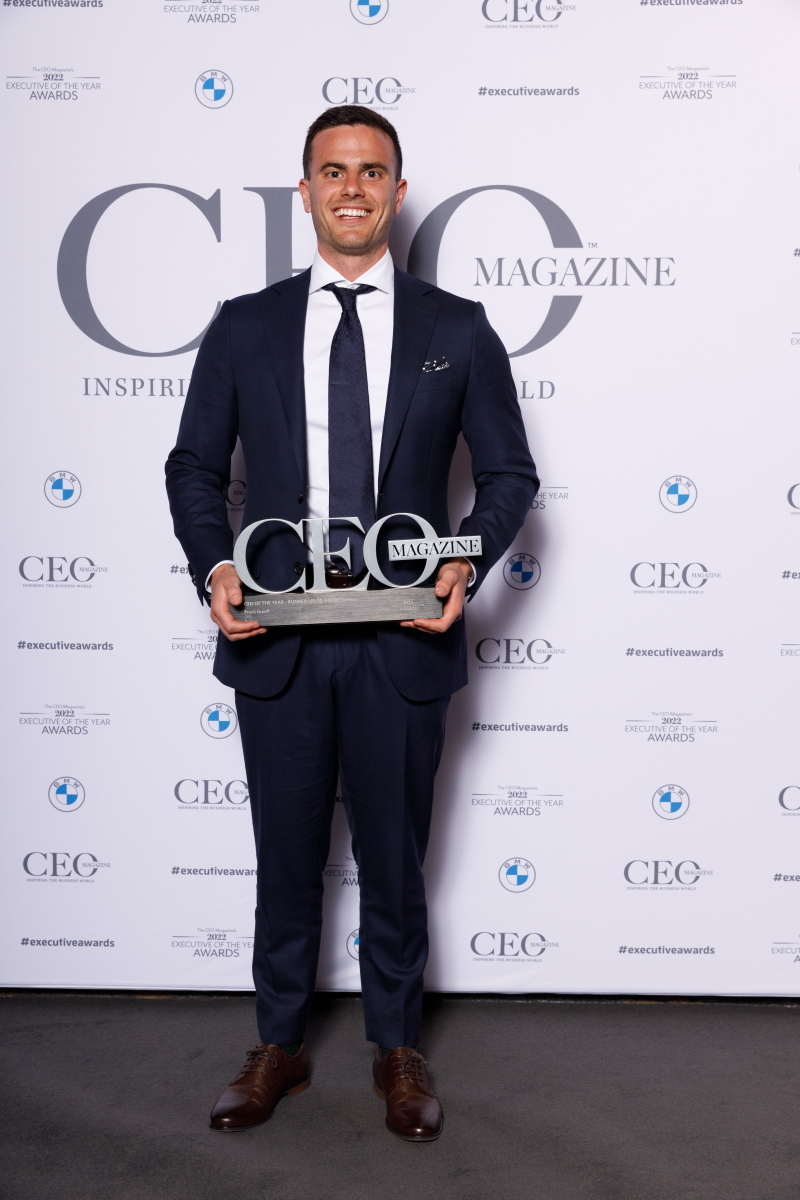 CEO and Managing Director, Realbase
When Frank Greeff traded his chef’s whites for the property tech market, it was a decision that would disrupt an industry. The company he started with his brothers, Realhub, united with property platform Campaigntrack in 2020 to form Realbase, which has transformed real estate marketing in Australia. 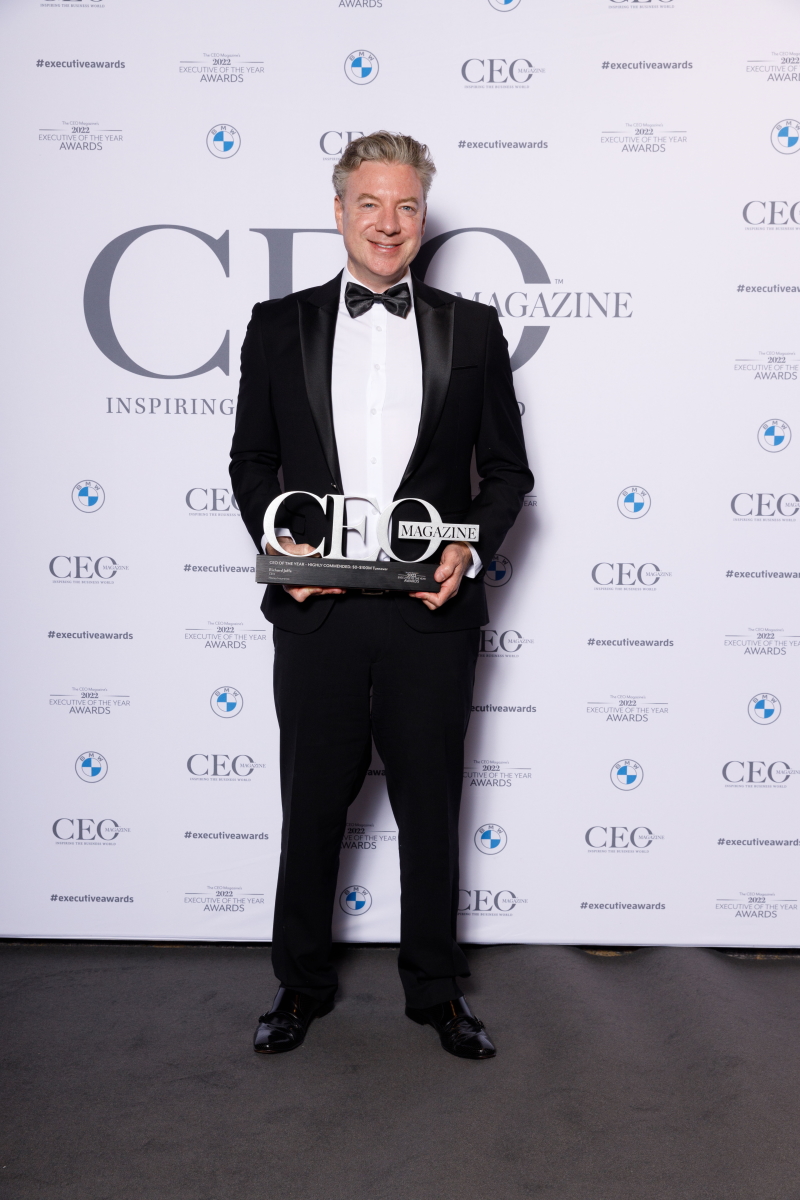 Founder and CEO, Honey Insurance
Richard Joffe created Honey Insurance around a simple idea: a safer home means fewer claims. By harnessing the power of smart home technology and automation, Honey has rocked the insurance industry, improving the safety of its clients and making Joffe’s vision a reality. 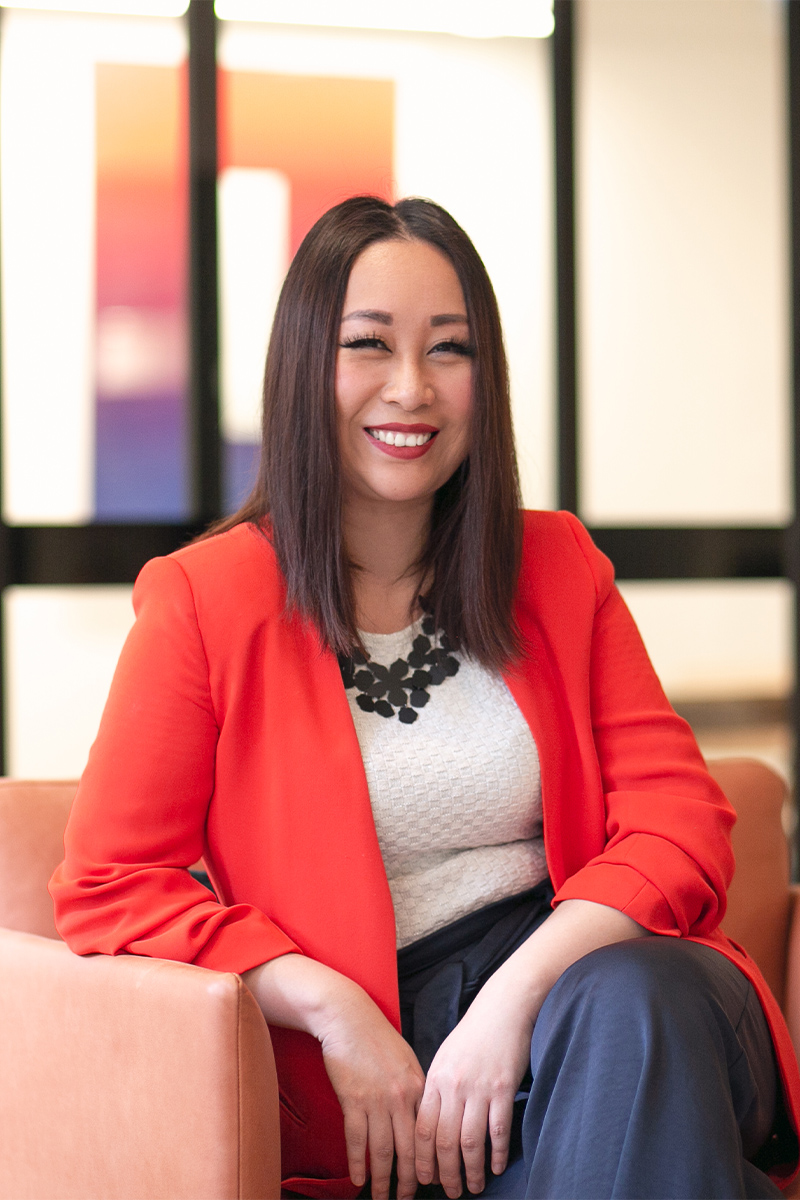 MANAGING DIRECTOR OF THE YEAR

CEO and Managing Director, You Want Group
An expert in human behaviour, Iris Du created You Want Group as a way to help people boost their careers and live the life they want through leadership coaching, human resources guidance, recruitment and goal-setting. A tenacious survivor herself, Du knows how to find opportunity in adversity and through her work with You Want Group has helped many in Australia’s business community do that and more. 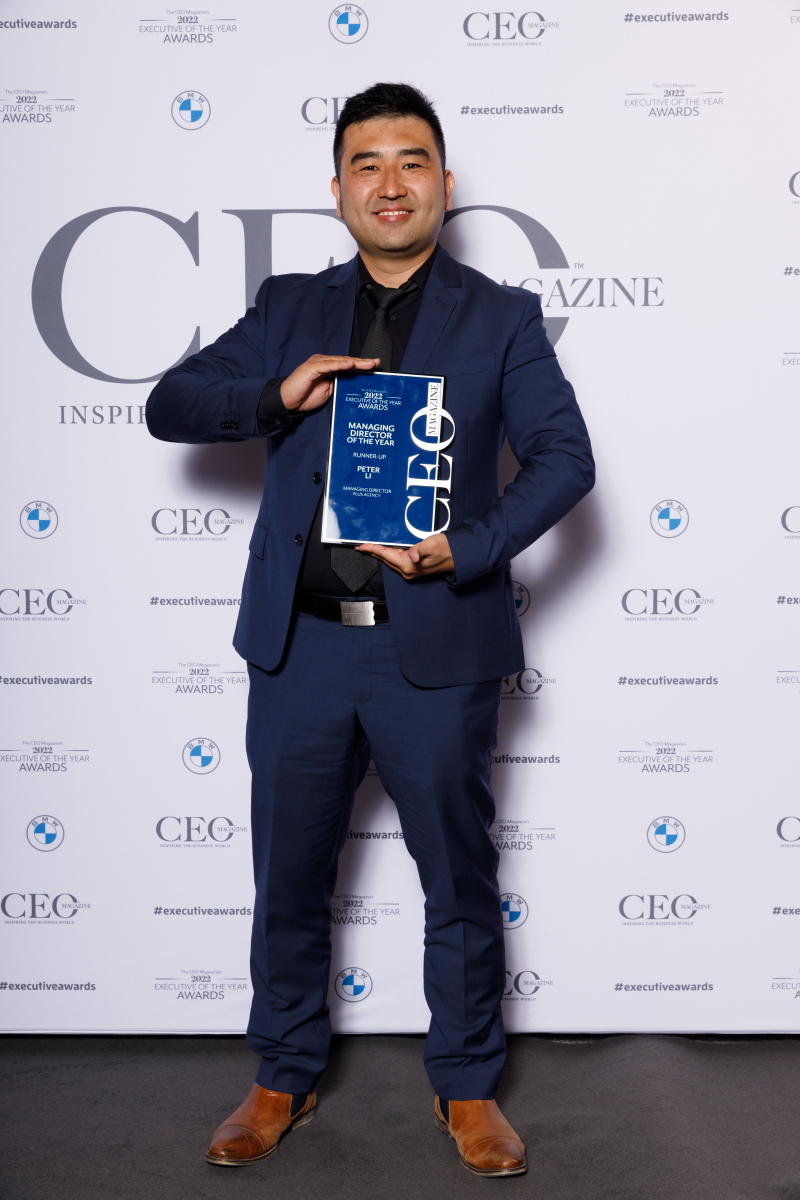 MANAGING DIRECTOR OF THE YEAR – RUNNER-UP

Managing Director, Plus Agency
Plus Agency has smashed numerous luxury residential property records across Sydney, and that’s saying something. As Managing Director, Peter Li has attracted offshore buyers and set a cracking pace for the harbour city’s booming boutique development and lux property market. Li is also one of the market’s leading voices, thanks to his role as guest editor at the Property Tribute and judge of the annual PropertyGuru Asia Property Awards. 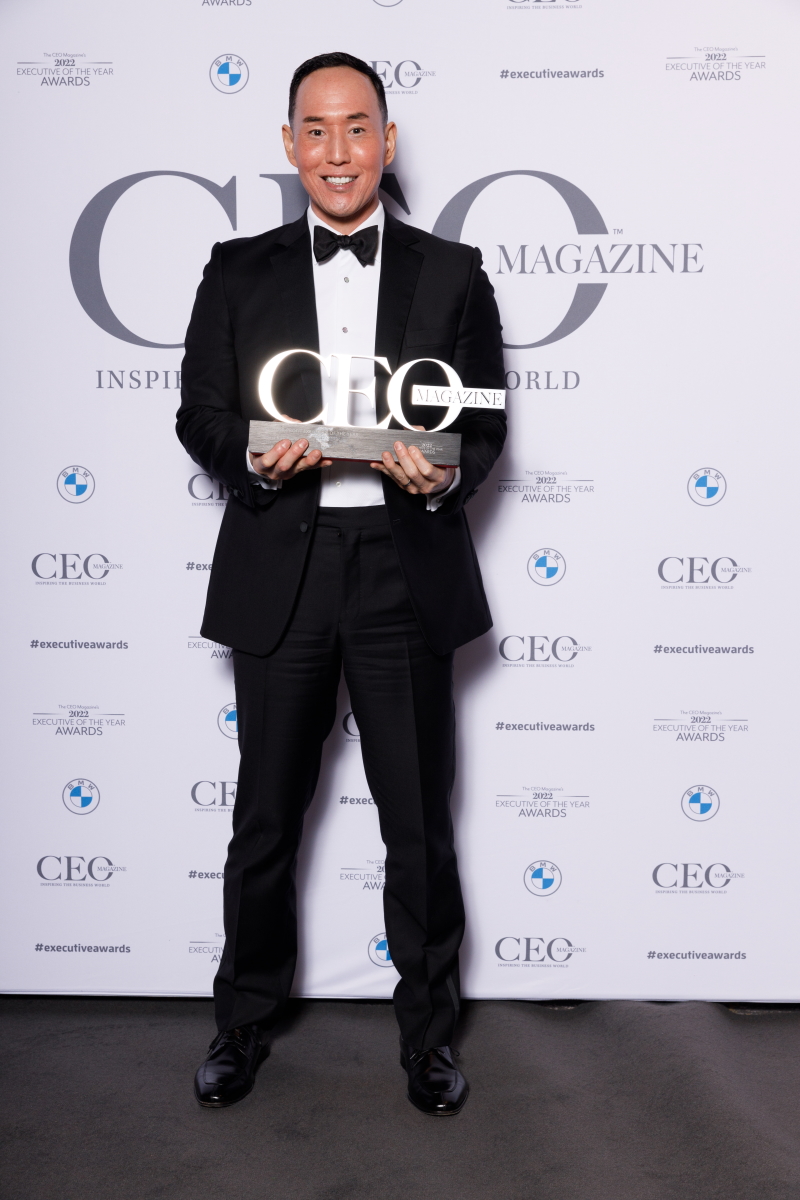 NOT-FOR-PROFIT EXECUTIVE OF THE YEAR

CEO, Cure Brain Cancer Foundation
There are few causes worthier than fighting to win the battle against brain cancer, and that’s precisely what lance Kawaguchi has devoted himself to. Formerly an investment banker, Kawaguchi shifted careers after making a promise to his mother, who passed away in 2016 from cancer. With Kawaguchi as CEO, the Foundation has helped Australians affected by brain cancer access revolutionary clinical trials and innovative therapeutics. Under his leadership, the Foundation launched the world’s first brain cancer-dedicated clinical acceleration program and committed to the GBM Agile clinical trial for Australian patients. 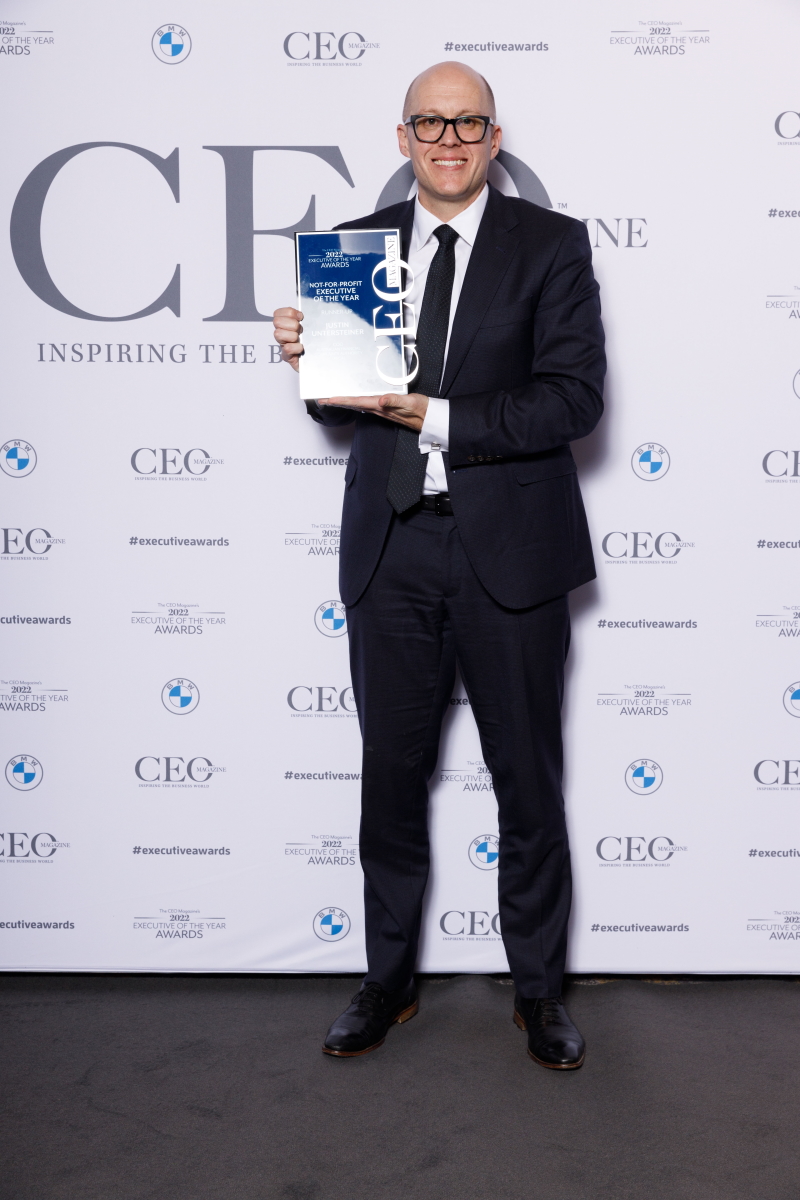 NOT-FOR-PROFIT EXECUTIVE OF THE YEAR – RUNNER-UP

COO, Australian Financial Complaints Authority
Everyone wants their voice heard – especially when it involves finance – which is why Australian Financial Complaints Authority exists. As its COO, Justin Untersteiner uses his relationship management skill set to amplify voices within the company as well, through his tireless advocacy for workplace equality, flexibility and diversity. Previously the leader of the Australian Tax Office’s Corporate Procurement and Tax Management Branch and part of the team at Cadbury Schweppes and Woolworths, Untersteiner’s mix of private sector and government experience has helped him drive significant organisational transformation programs at AFCA. 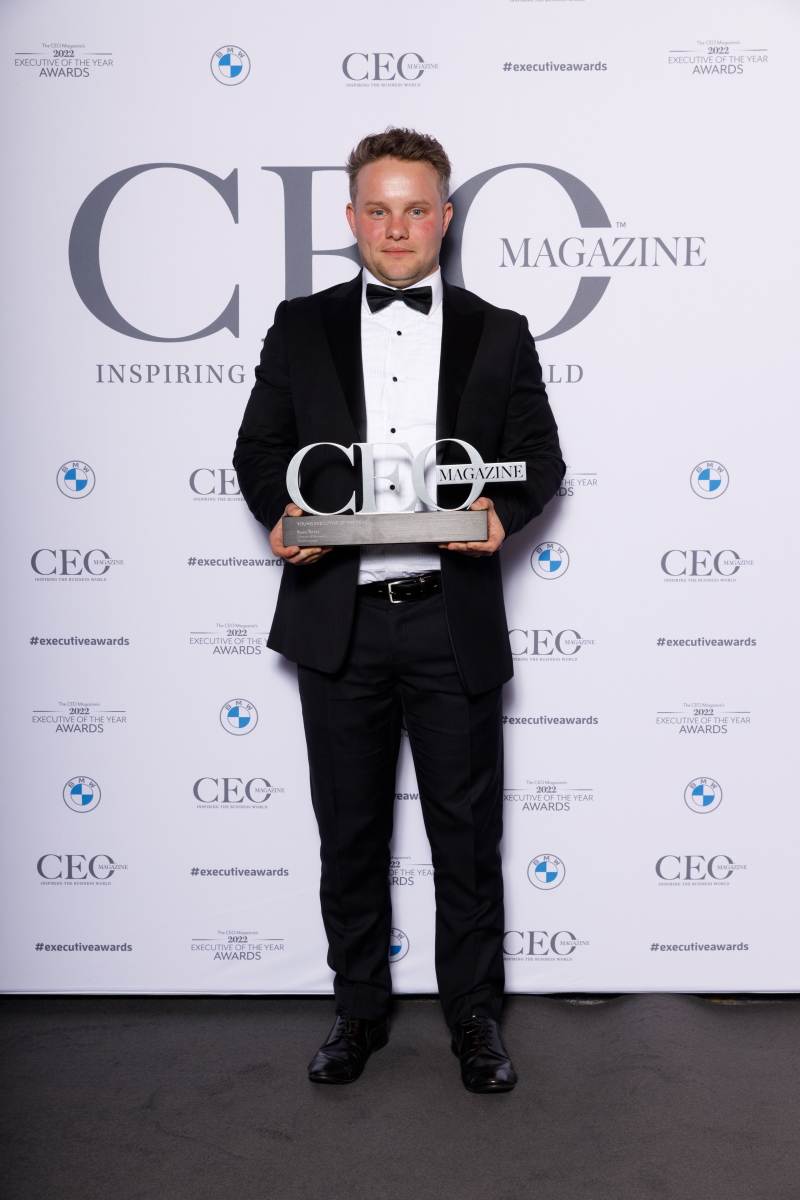 YOUNG EXECUTIVE OF THE YEAR

Director of Marketing, The Entourage
In a relatively short space of time, Ryan Terrey amassed a wealth of marketing experience throughout his career on executive teams in multiple industries. Now The Entourage’s Director of Marketing, Terrey is using that experience to drive leads and revenue for small businesses across the country. His passion for team development and business growth are a perfect fit for The Entourage, a coaching and training company for small business owners and entrepreneurs. 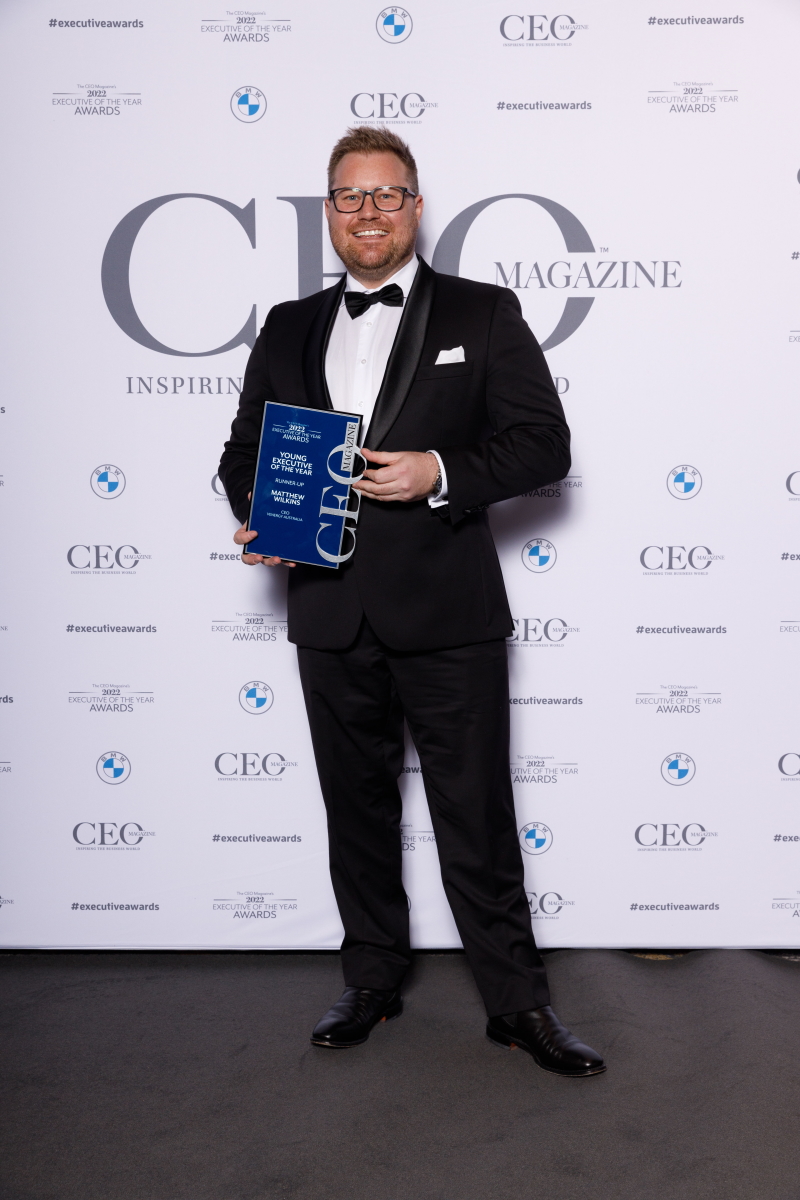 YOUNG EXECUTIVE OF THE YEAR – RUNNER-UP 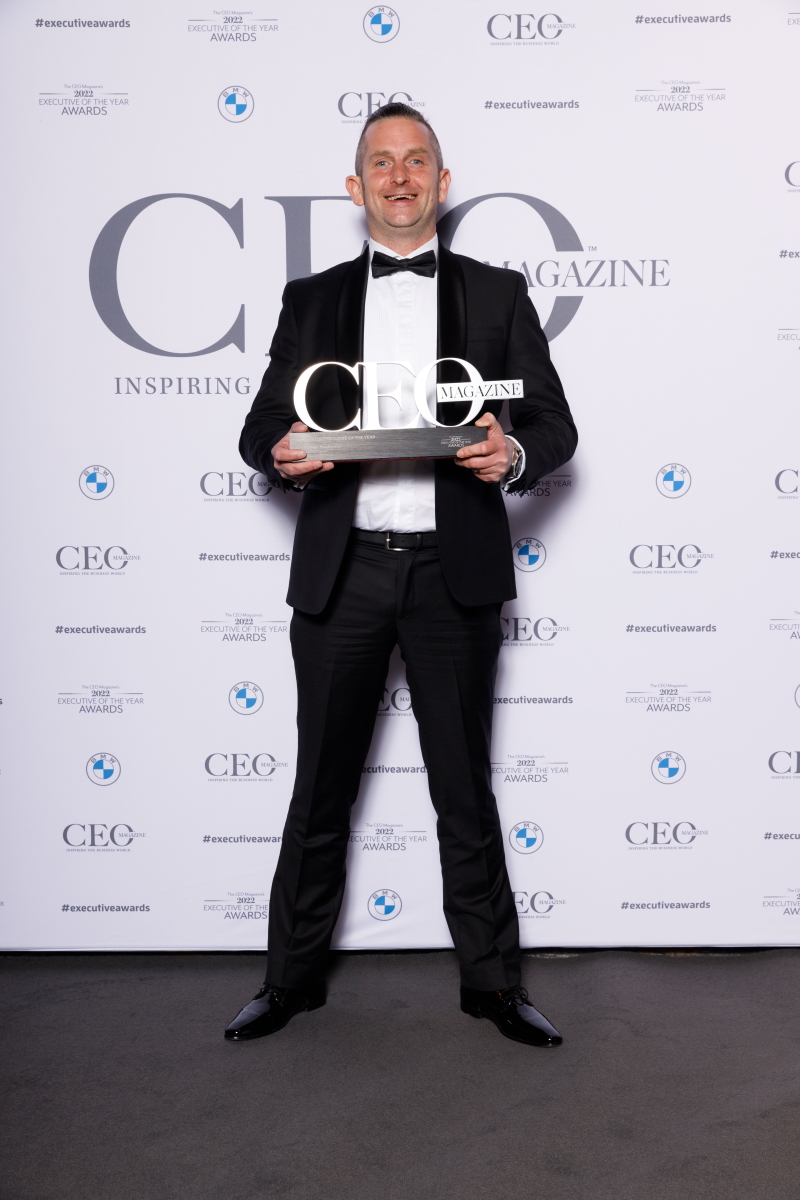 STARTUP EXECUTIVE OF THE YEAR

Director, Collar Group
A hands-on leader, Ephram Stephenson and his teams have successfully placed over 10,000 people into permanent jobs and over 25,000 people into temporary assignments throughout Australia over the past 18 years. In 2021 he built Collar Group with a desire to change the way recruitment is done; now, by valuing people over KPIs, Collar is making it happen. 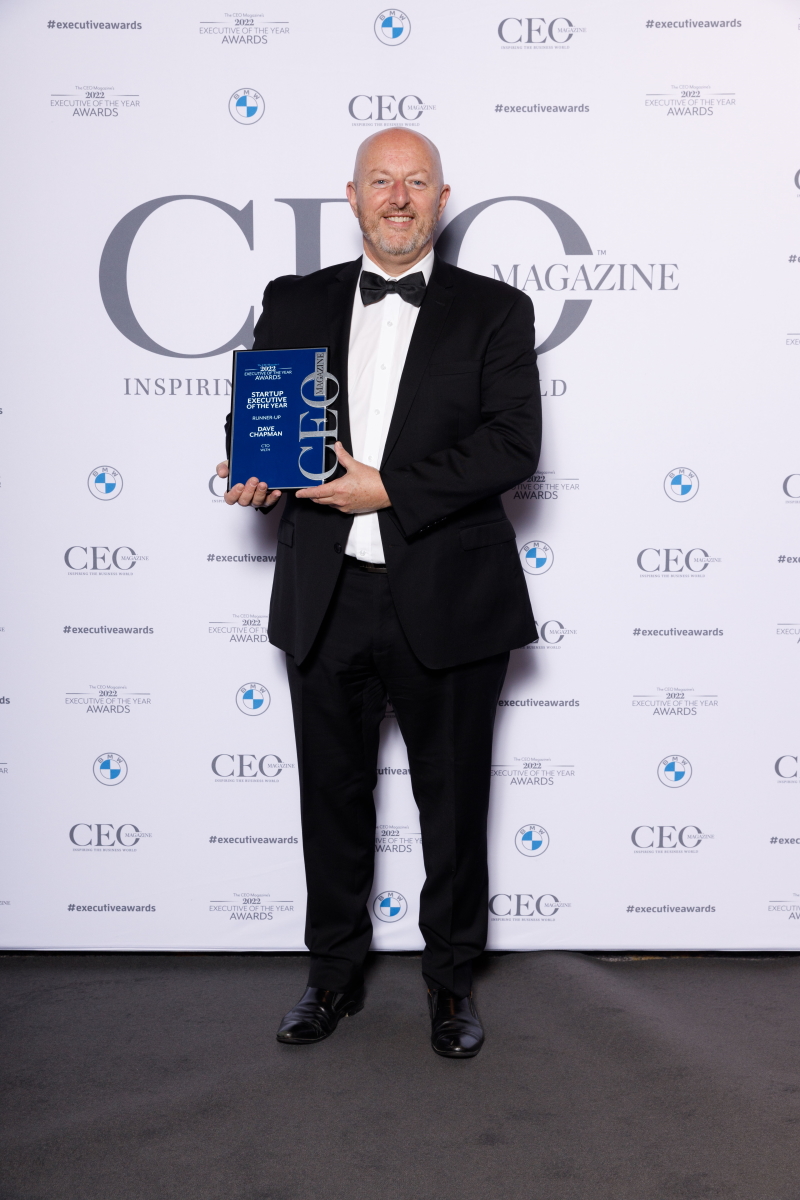 STARTUP EXECUTIVE OF THE YEAR – RUNNER-UP

Chief Technology Officer, WLTH
Since 2019, WLTH has sought to bring positivity to the world of lending and business payments. As Chief Technology Officer, Dave Chapman has used his 30 years of experience with some of the biggest Australian financial institutions to develop Chapman’s solution architecture, which delivers on the company’s promises of business payments made better. His hands-on expertise in cyber security, data and analytics, integration technologies and enterprise digital transformation has helped drive superb business and customer outcomes. 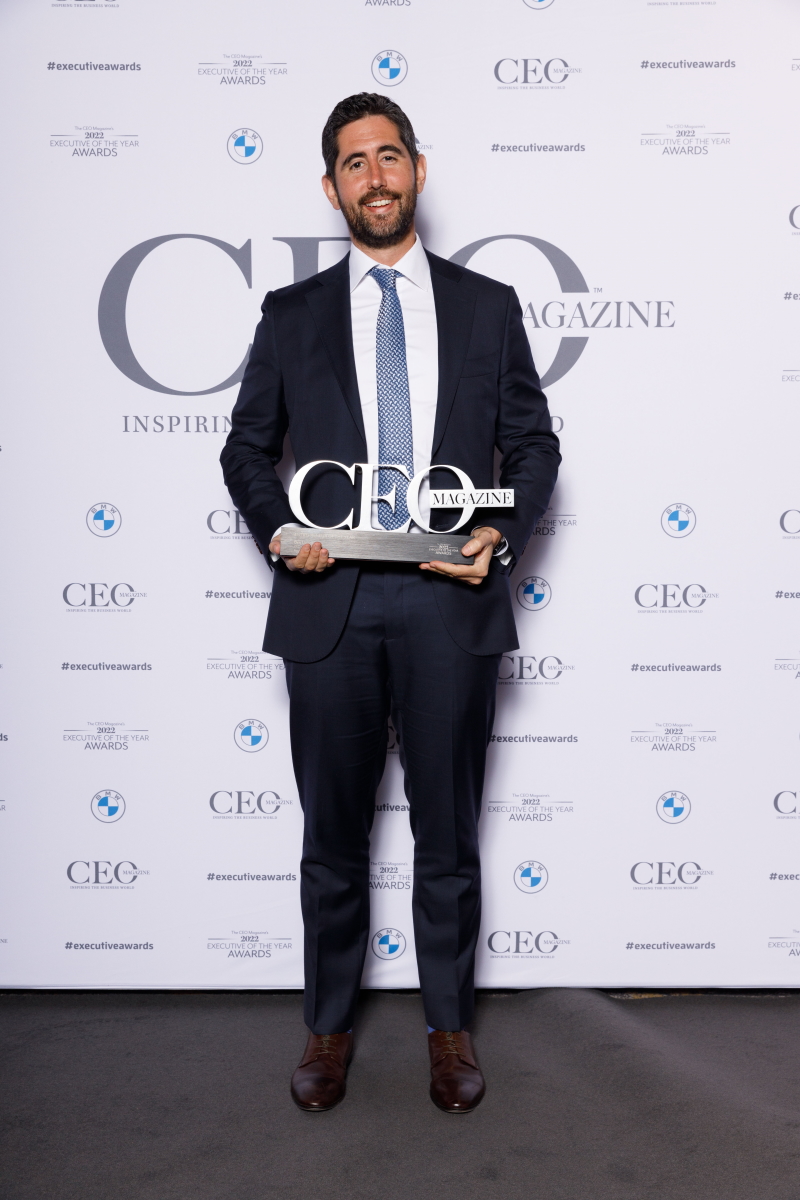 ENTREPRENEUR OF THE YEAR

Co-Founder and CEO, FoodByUs
Ben Lipschitz is the co-founder and CEO of FoodByUs, Australia’s largest online hospitality marketplace. The platform, which combines top wholesale food suppliers and allows venues to compare products and pricing, has given the industry a big boost throughout recent tough times. In 2021, Lipschitz was recognised as one of Australia’s top 100 Young Entrepreneurs. His leadership expertise has grown the FoodByUs team by 50 per cent in the last 12 months and secured ongoing investment from FJ Labs and Macquarie Capital. 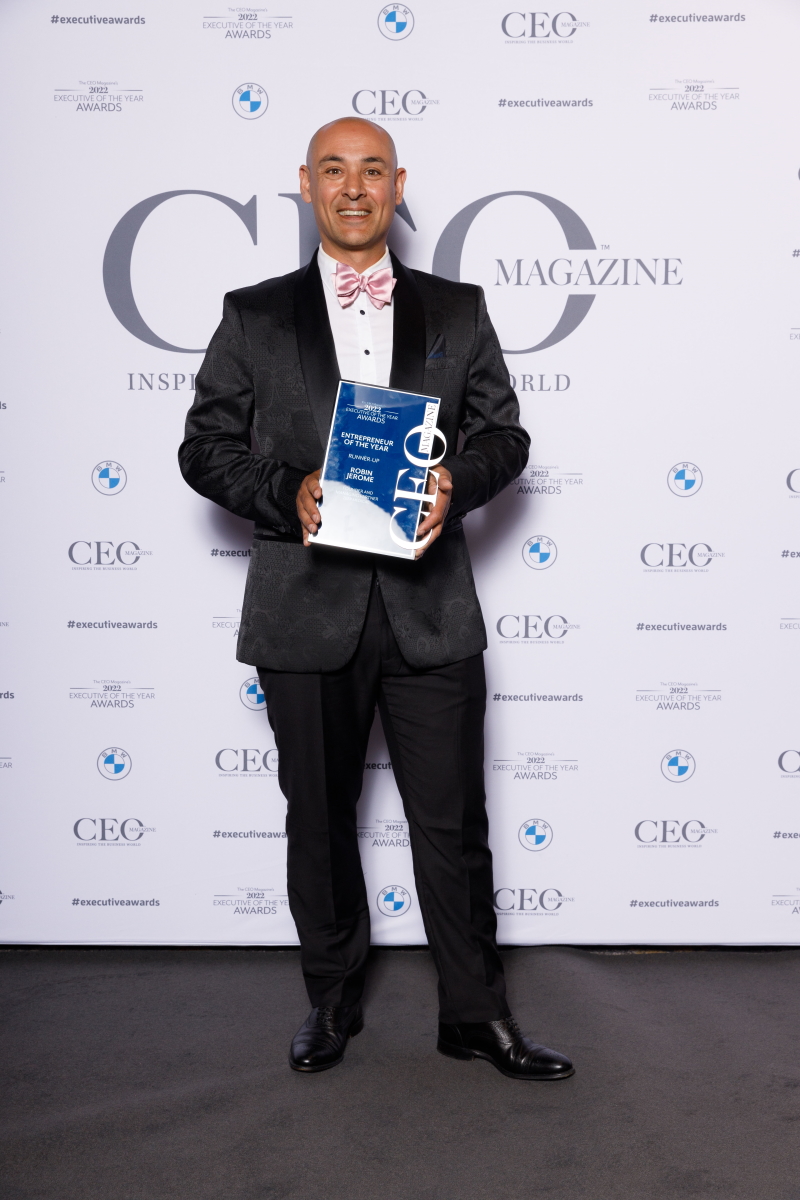 ENTREPRENEUR OF THE YEAR – RUNNER-UP

Co-Founder, Zeep
With medical roles in the spotlight like never before, Zeep has become a lifesaver to those looking for work in the healthcare industry. A recruitment veteran, Robin Jerome co-founded the medical recruiter in 2017 to support Australia’s health services and the patients in their care. In 2020 and 2021, Zeep was recognised in the AFR Fast Starters as the fastest-growing medical recruiter in Australia. 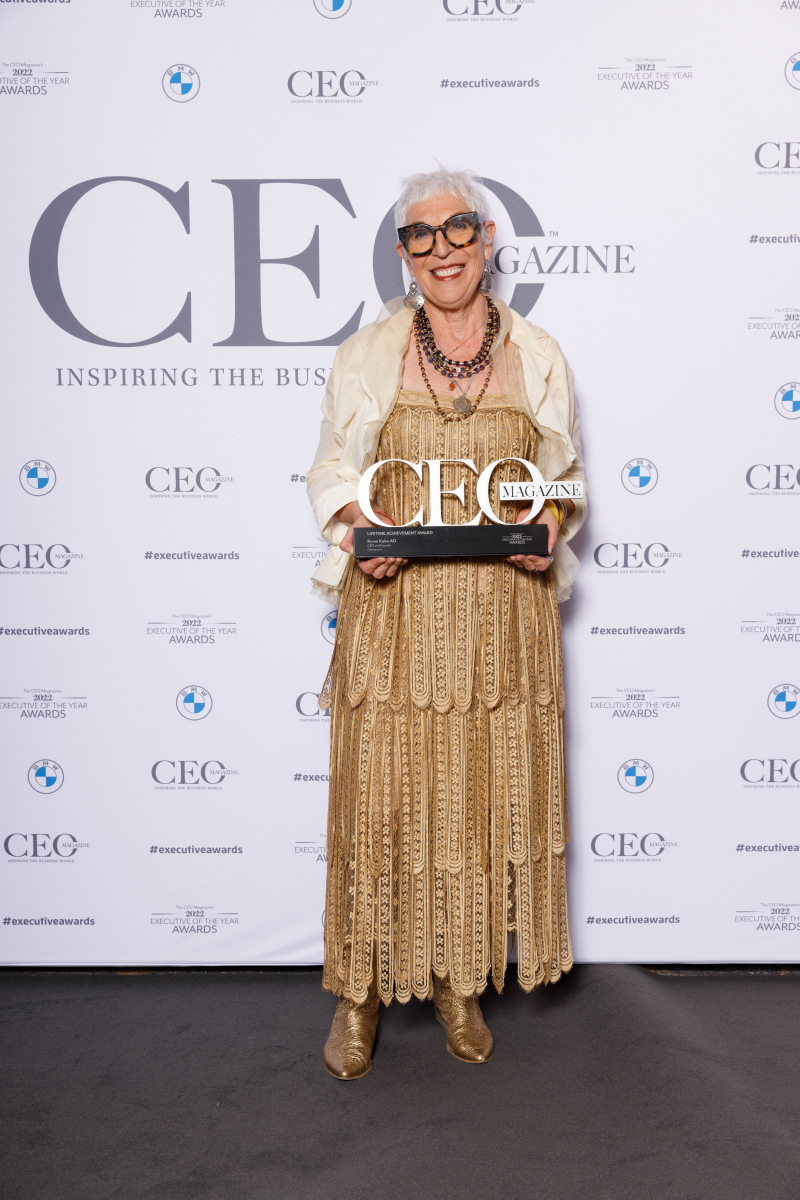 Founder and CEO, OzHarvest
Ronni Kahn has dedicated her life to improving Australia’s food waste situation. As founder and CEO of OzHarvest, she has done that and more – the charity has served more than 50 million meals made up of donated excess food since 2004. Kahn’s achievements have been immortalised in a film, Food Fighter, and through her honours as an Officer of the Order of Australia (AO) and Australian Local Hero of the Year 2010. She recently published her memoir, A Repurposed Life.

Read next: Register your interest to join Australia’s top leaders in the spotlight