BMW iX takes the iconic brand into a new sphere

The all-electric model is unlike any BMW you have driven or stepped in before, with luxury and spaciousness brought to the fore. 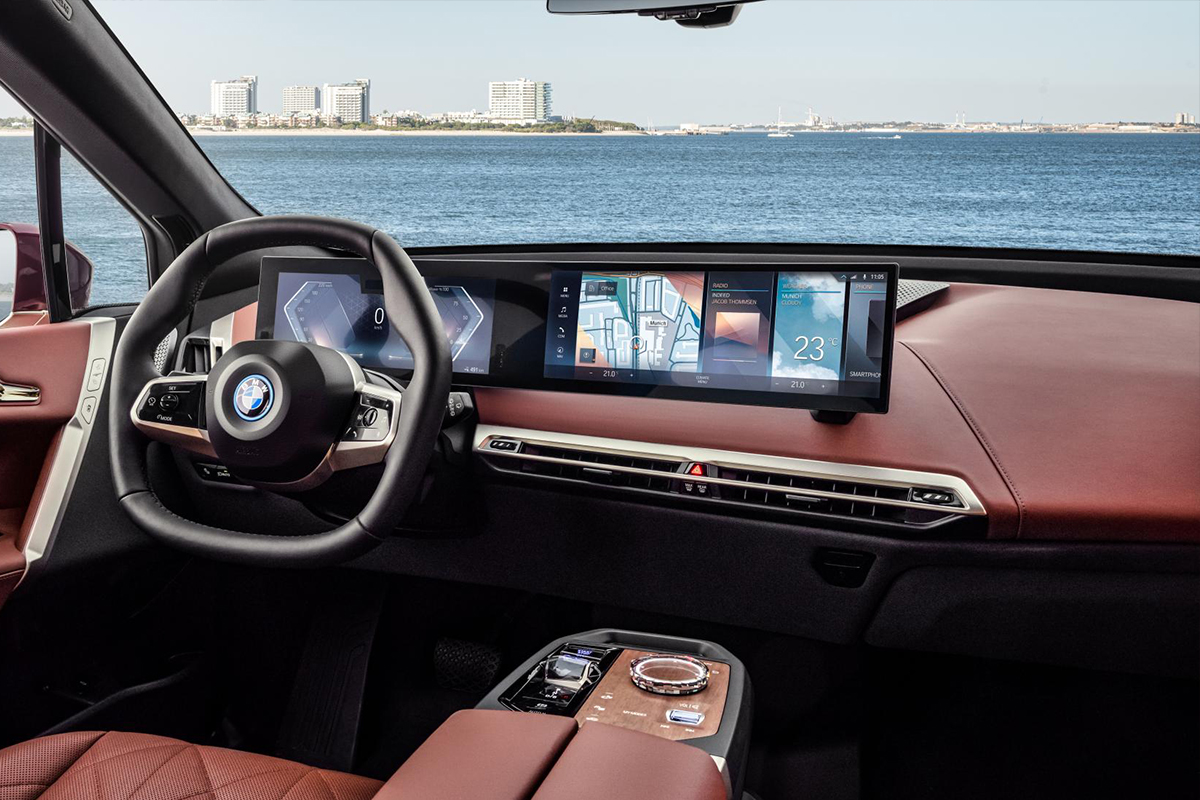 BMW Group has unveiled the BMW iX, which the German automotive manufacturer is calling its technology signature car.

The all-electric model is the production version of the brand’s iNEXT concept that was unveiled in 2018.

Without a doubt, the BMW iX is the most dramatic and distinct divorce from the old DNA of the ultimate driving machine. The proportions are that of a normal BMW SUV but the surfaces have become sleek and minimalist: there is the slimmest headlight units ever seen on a BMW; the door openers are flush to the surface (operated at the press of a button); the side windows are frameless; and the tailgate – which has no separation joints and extends across the whole of the rear – has extremely slim rear lights.

“The BMW Group is constantly striving to reinvent itself. That is a central element of our corporate strategy,” says Oliver Zipse, Chairman of the Board of Management of BMW AG in a statement. “The BMW iX expresses this approach in an extremely concentrated form.” 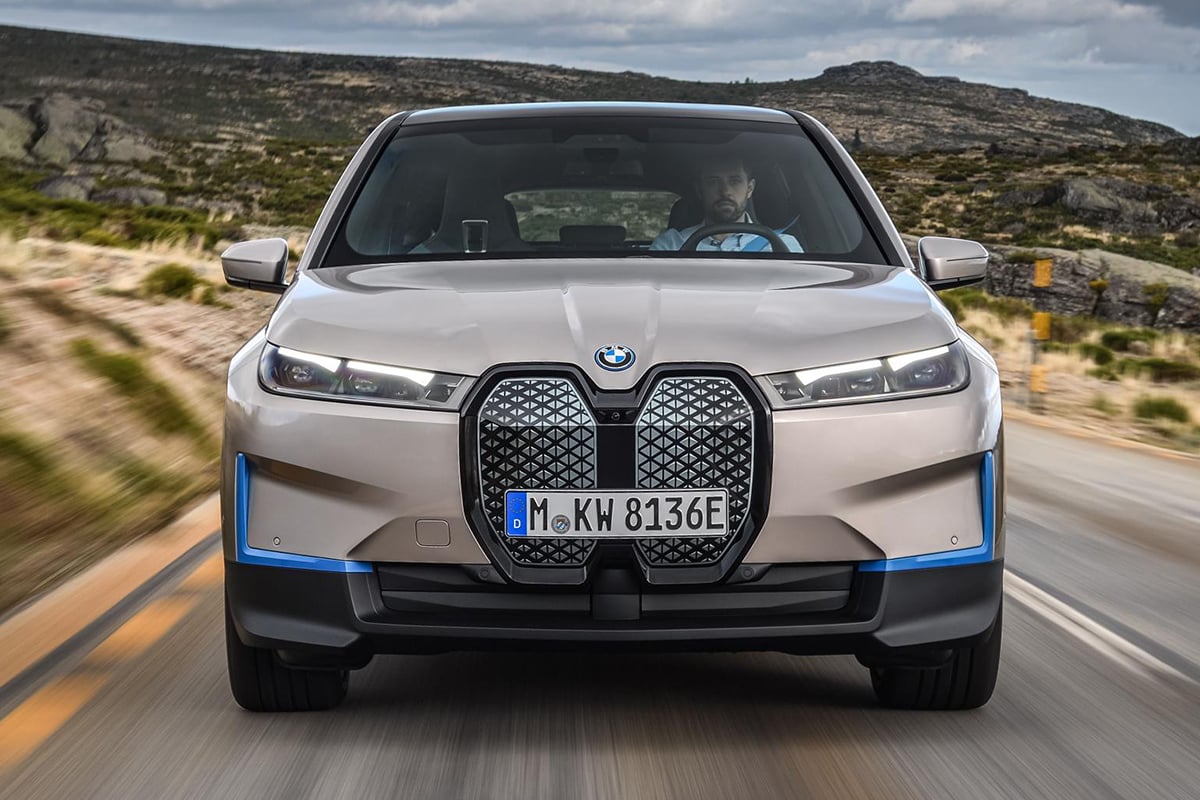 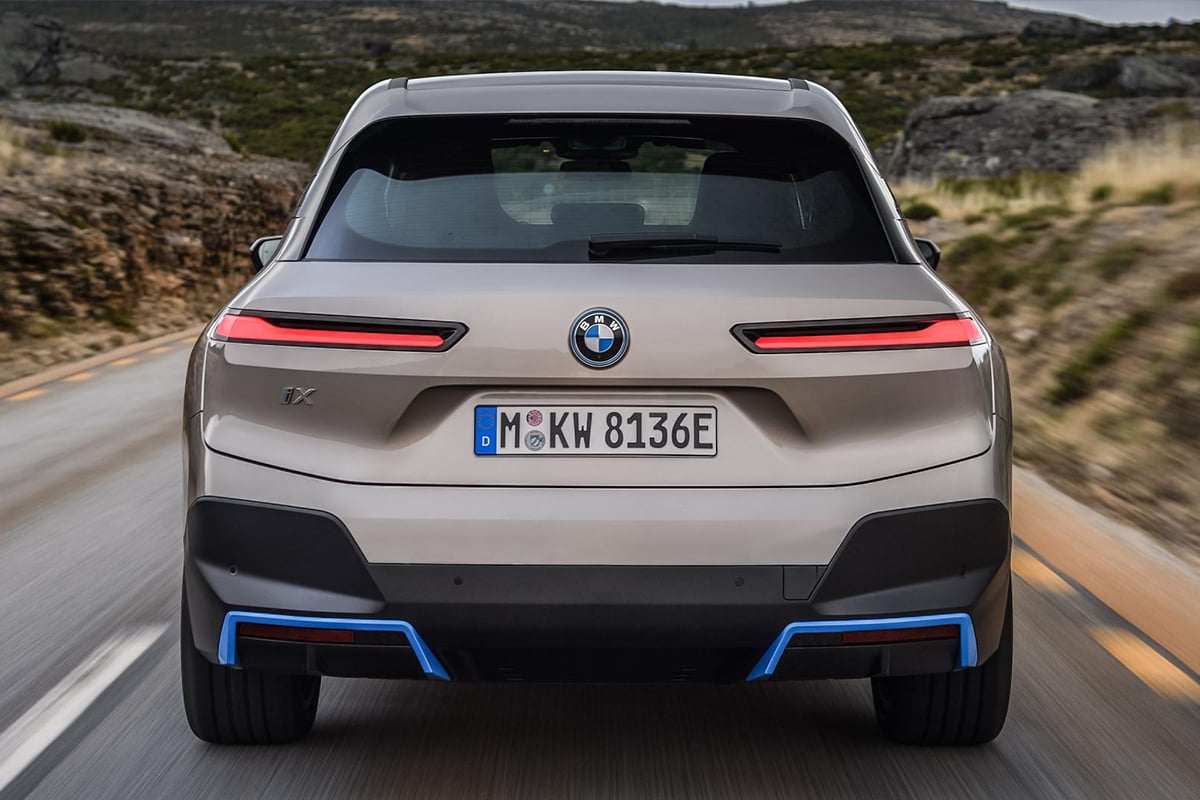 The rear lights are minimal and flush with the bodywork. Photo: BMW Group
[/img]

At first glance, auto aficionados might assume BMW is closely following the Tesla playbook; however, a look inside reveals a few sleek style variances.

The centre console’s wood surface has microswitches buried within, and what Top Gear compares to a clear crystal paperweight is actually the touch-sensitive iDrive controller.

The interior is deliberately spacious with the emphasis on creating a relaxing environment. There are new seats with integral head restraints and an exceptionally large panoramic glass roof providing all five seats of the BMW iX cabin with a luxurious, lounge-like ambience.

“The BMW iX shows how we can give new technologies a very modern and emotionally engaging design. The car is technologically highly complex, but it feels very clear and uncomplicated,” says Adrian van Hooydonk, Senior Vice President, BMW Group Design. “The BMW iX offers a mobile living space in which people will feel at ease and the car’s intelligence is always available without becoming obtrusive.” 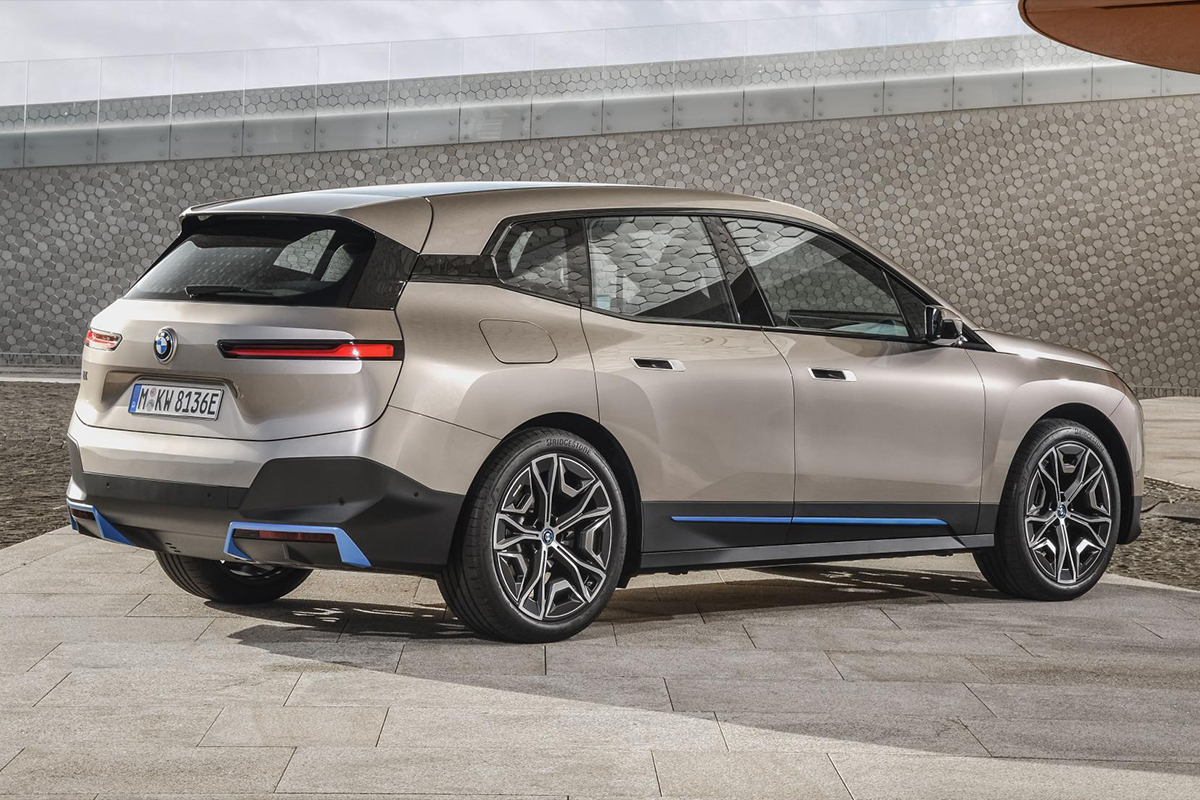 The BMW iX has a sleek exterior look with everything flush with the surface. Photo: BMW Group 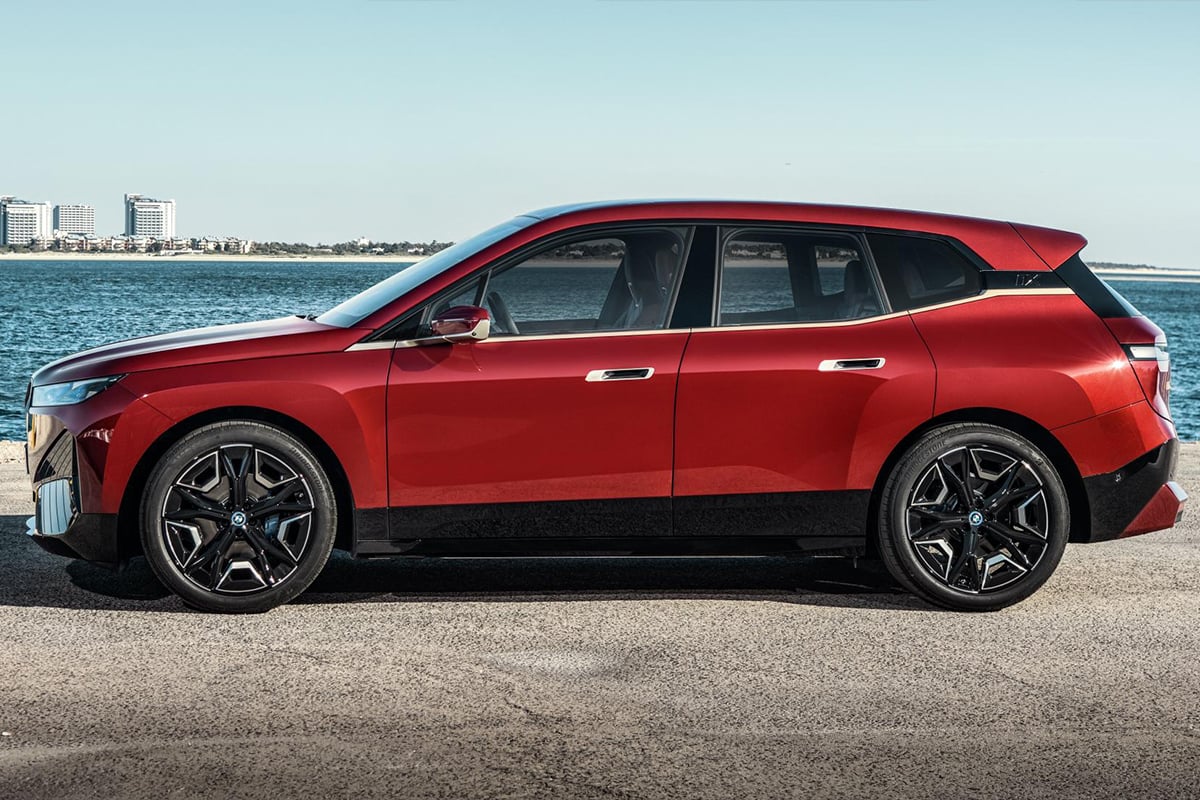 The length of the BMW iX is that of a BMW SUV with a roof height of the X6. Photo: BMW Group 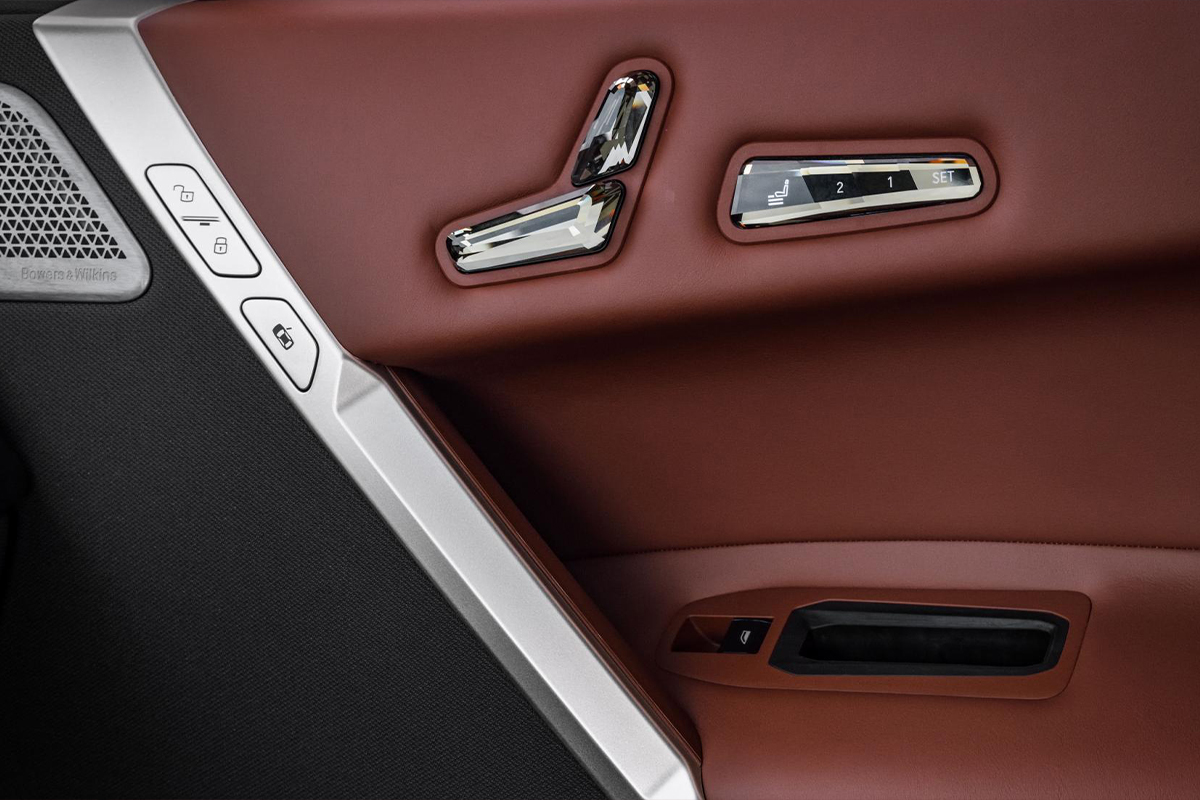 There are no exposed buttons or knobs on the BMW iX. Photo: BMW Group
[/img]

Being a BMW and a signature car means that the iX is seriously nippy. The drive train features two electric motors with an output of more than 500hp, getting it to 100km/h in under five seconds. The electric range is about 600km and the charging technology enables DC fast charging at up to 200kW. In this way, the battery can be charged from 10–80% of its full capacity in under 40 minutes. Within 10 minutes enough energy can be fed into the battery to increase the car’s range by more than 120km. At 11kW from a wallbox, it takes less than 11 hours to charge the high-voltage battery from 0–100%.

“The batteries fitted in the BMW iX are designed as part of a long-term resource cycle and enable an exceptionally high recycling rate. The power used to produce the battery cells and the high-voltage battery as a whole come exclusively from renewable sources,” BMW Group states.

Finally, the unmistakable BMW kidney grille is emphasised to the max in the iX. As the model is battery-operated, it has been turned into a multifunctional high-tech interface for the advanced driver assistance systems. Camera technology, radar functions and other sensors are integrated seamlessly into the grille behind a transparent surface.

Another nifty use of equipment is that the badge is actually the lid of the window washer reservoir. 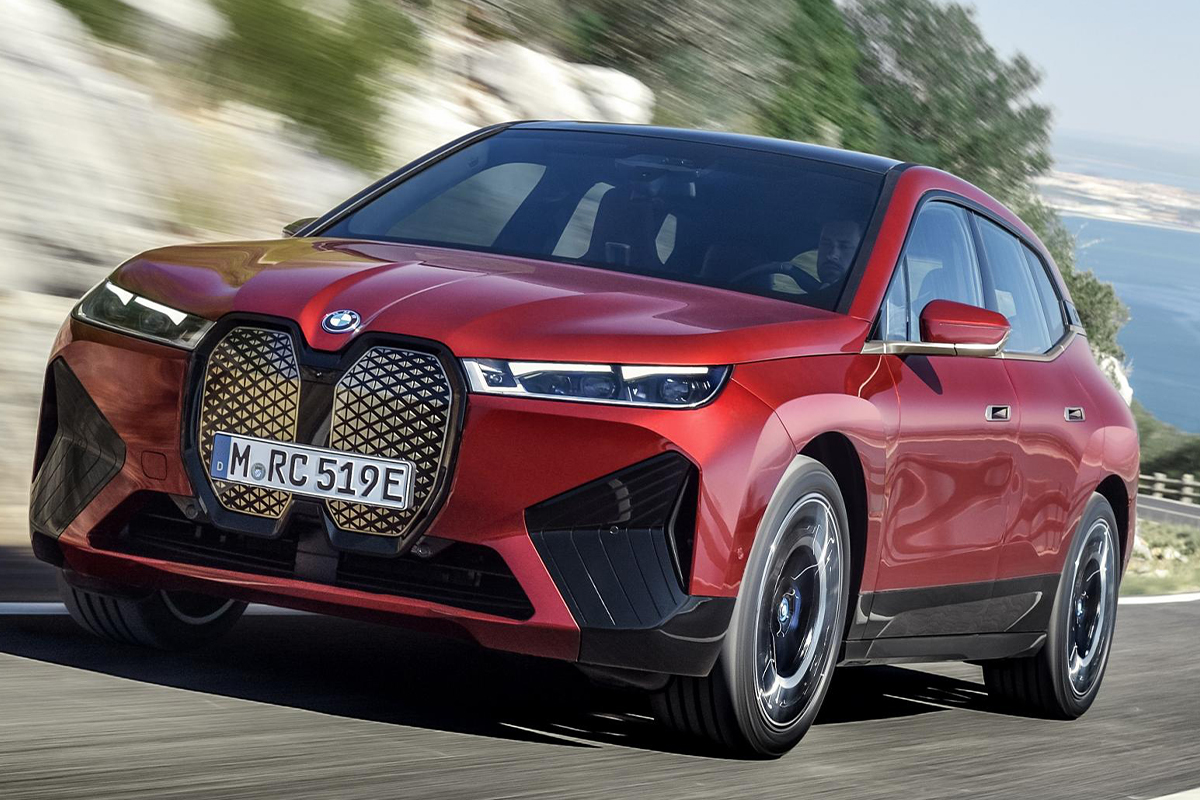 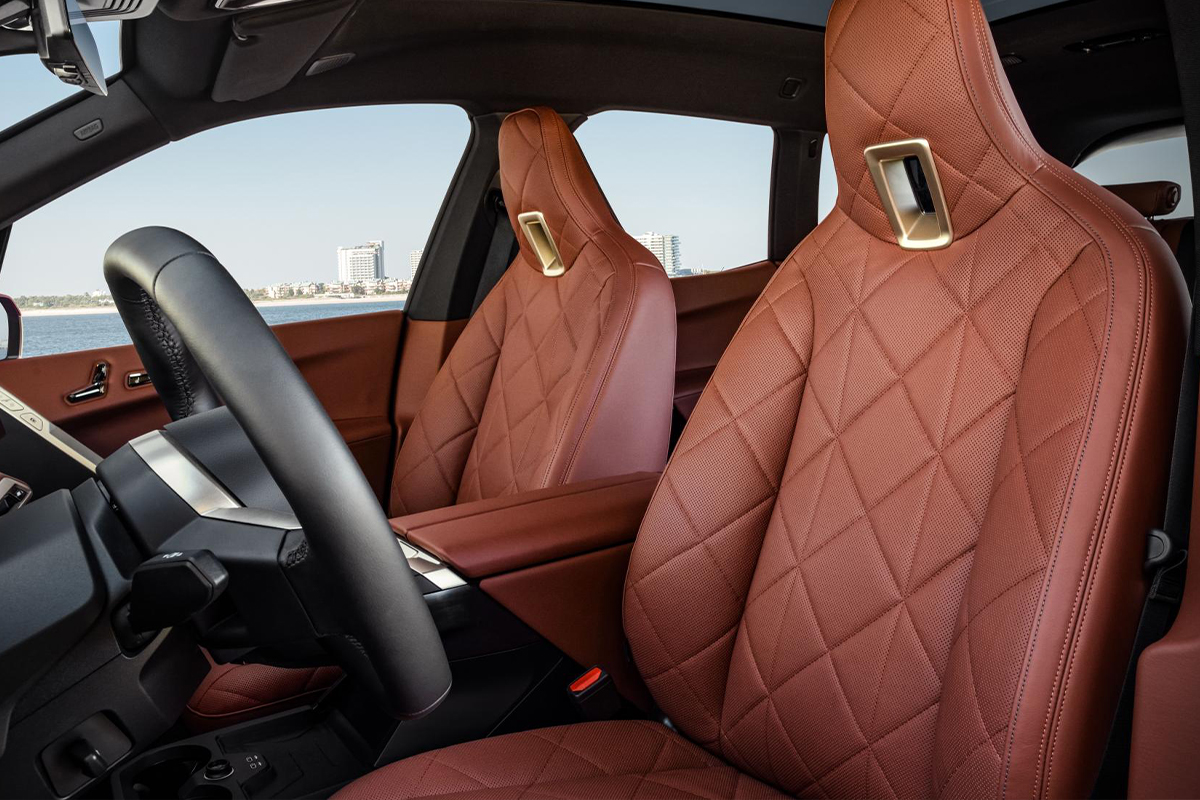 The headrests are built into the seats of the BMW iX. Photo: BMW Group 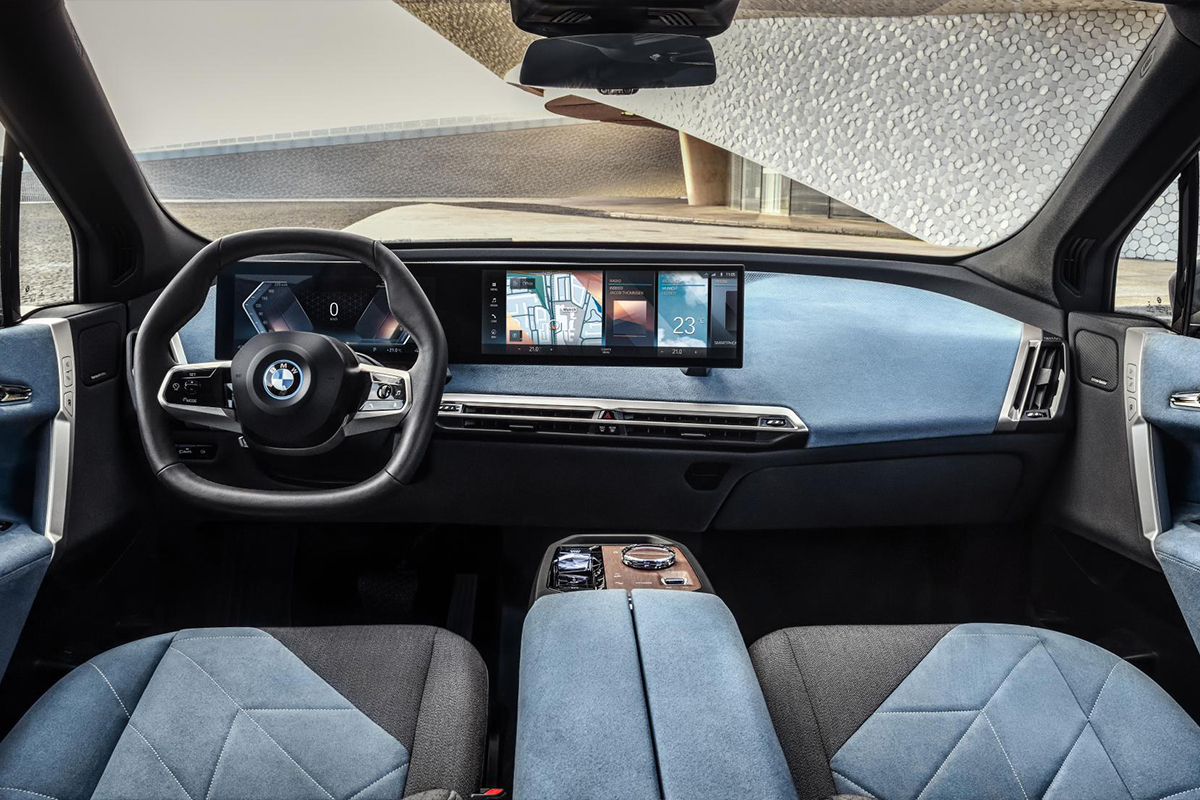 The BMW iX will go into production at the BMW Plant Dingolfing in Germany, the largest production site of the BMW Group in Europe, from the second half of 2021 as the BMW Group’s new technology flagship. BMW Group state the BMW iX is still in the series development phase.