How Audi has reinvented the wheel, again, with the A7

If you ever need someone to share out a cake between a large number of guests, ask an Audi employee for help. When it comes to finding new ways to slice, dice and re-segment something, the stylish Germans are outstanding. Many moons ago, Audi was satisfied with slicing up even numbers – offering an A4, an A6 and an A8 and leaving the odd ones out for its Bavarian competitors at BMW – but then it realised it was letting some customers fall between the gaps. What if someone wanted a big, luxurious sedan, but not quite an uber limo like the A8, nor something slightly smaller yet still grand, like the A6?

What if what those people really wanted was something in between, with a sleek, Sportback design that allowed a kind of giant-hatched boot? And lo, the Audi A7 was born, neatly filling a niche within a niche that few people had ever expected existed, and helpfully not being a direct competitor for BMW’s 7 Series (that would be the A8 – keep up, people).

And now we have a new A7, which also launches Audi’s upgraded “design language” (fear not, it still appears to be German).

One of the car’s designers, Andreas Koglin, says the A7 is all about “the essence of tomorrow” and that it’s different from the “prestigious” A8 and the “sporty” A6, because it is “the progressive one”.

That allowed Koglin to do something new with the A7’s proportions, giving it a higher shoulder line, a faster roof line and a more forward-leaning stance, plus a wider, redesigned Audi grille at the front, with a power-domed bonnet.

The big changes, though, come at the rear, which is edgy, “three-dimensional” and decidedly different, and features alluring rear light bars that connect across the whole back end, giving it what Koglin calls a “UFO” look (for older folks, he also claims it’s a bit Knight Rider – Germans can’t get enough of the Hoff). 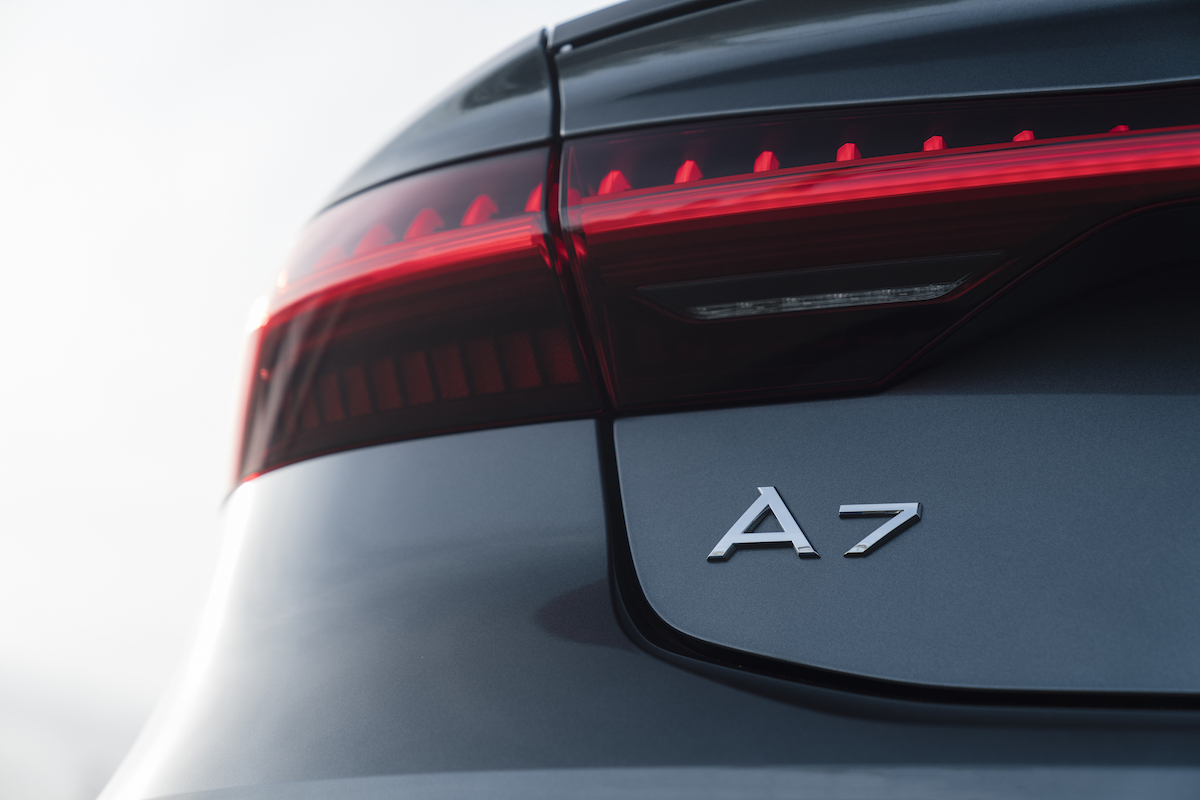 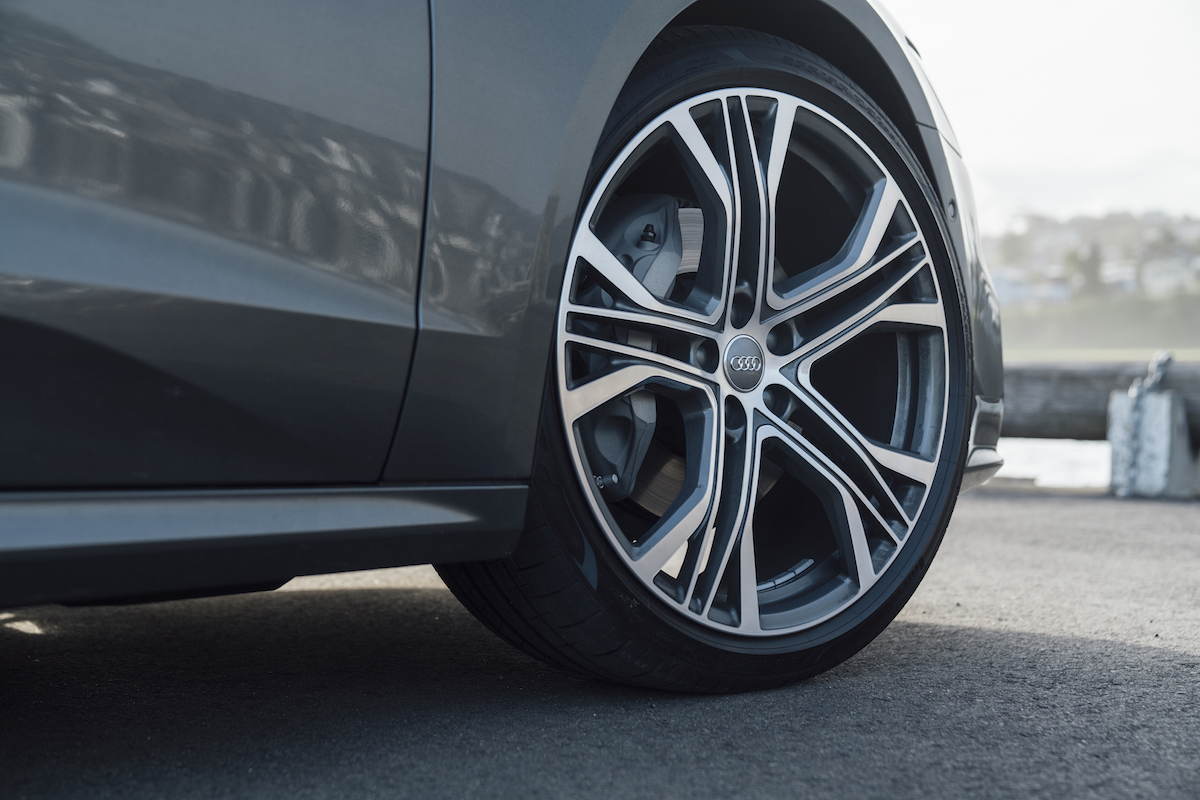 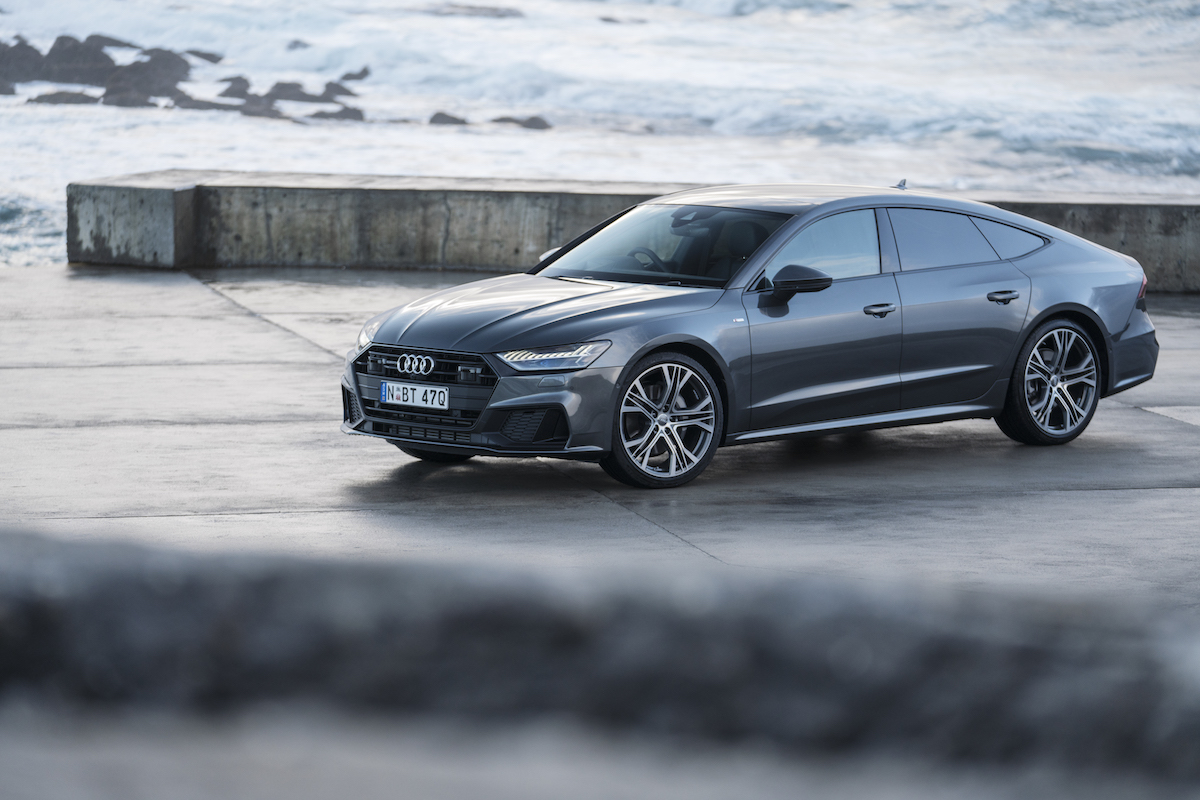 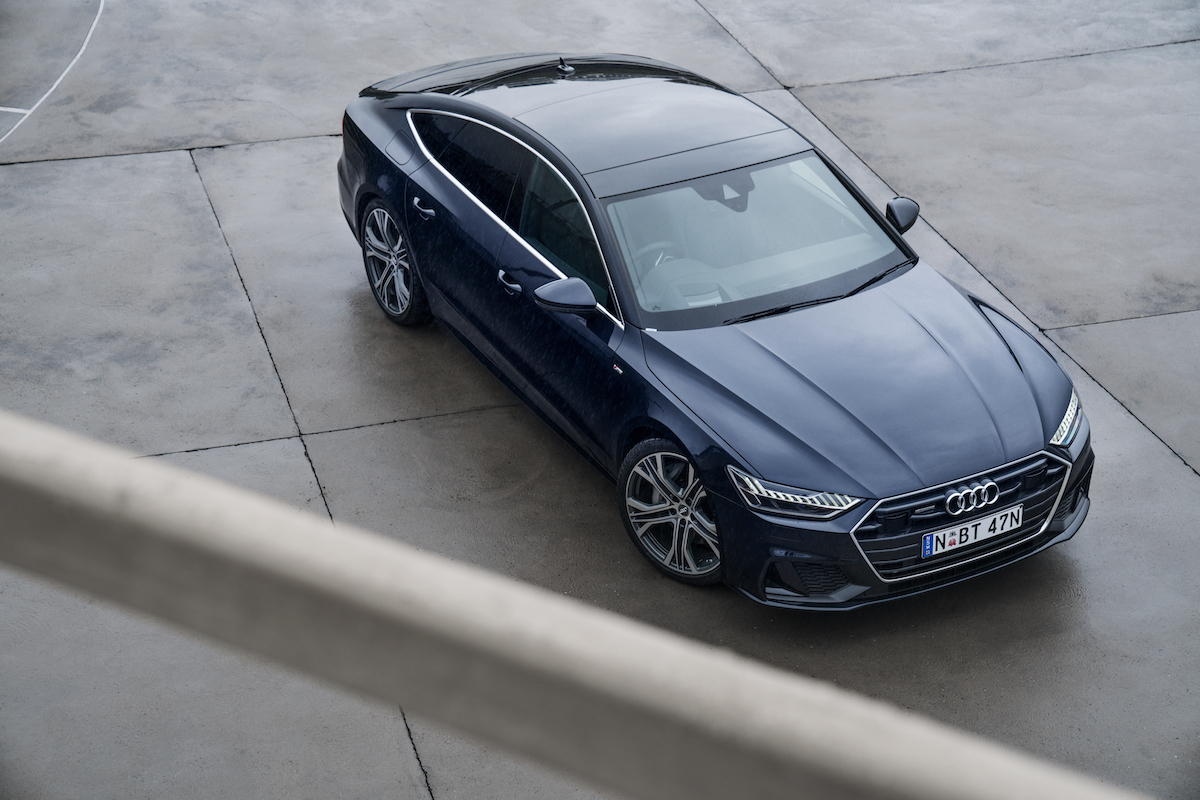 The way the lights are animated as you approach and unlock the car is genuinely eye-catching and sets the tone for the futuristic, digital-age feel the A7 is going for, one that it truly nails with its interior.

Three giant screens dominate your outlook, with the two central touchscreens offering both haptic and audio feedback as you interact with them, while a lush 12.3-inch virtual cockpit sits in the binnacle in front of the driver.

This fantastic Audi system, which allows you to toggle between different options of how you want your speedo, tacho, giant Google maps, audio information etc. to be displayed, has been improved again for the A7, and feels truly ingenious.

The overall effect is that you are driving a vehicle from the future, and a beautifully appointed one at that, and that feeling of high-tech capability is only furthered by the various safety systems, which will do things like gently pulling at the steering wheel to guide you back into your lane if you start to wander, and automatically braking the car if you fail to see a car approaching at an intersection as far as 75 metres up the road.

In driving terms, the Dynamic Steering package (a A$4,200 optional extra) is truly impressive as it provides both passive and active real-wheel steering. At speeds up to 60km/h, it moves the rear wheels up to five degrees in the opposite direction from the front ones, which makes parking and manoeuvring much easier, and reduces your turning circle by more than a metre. 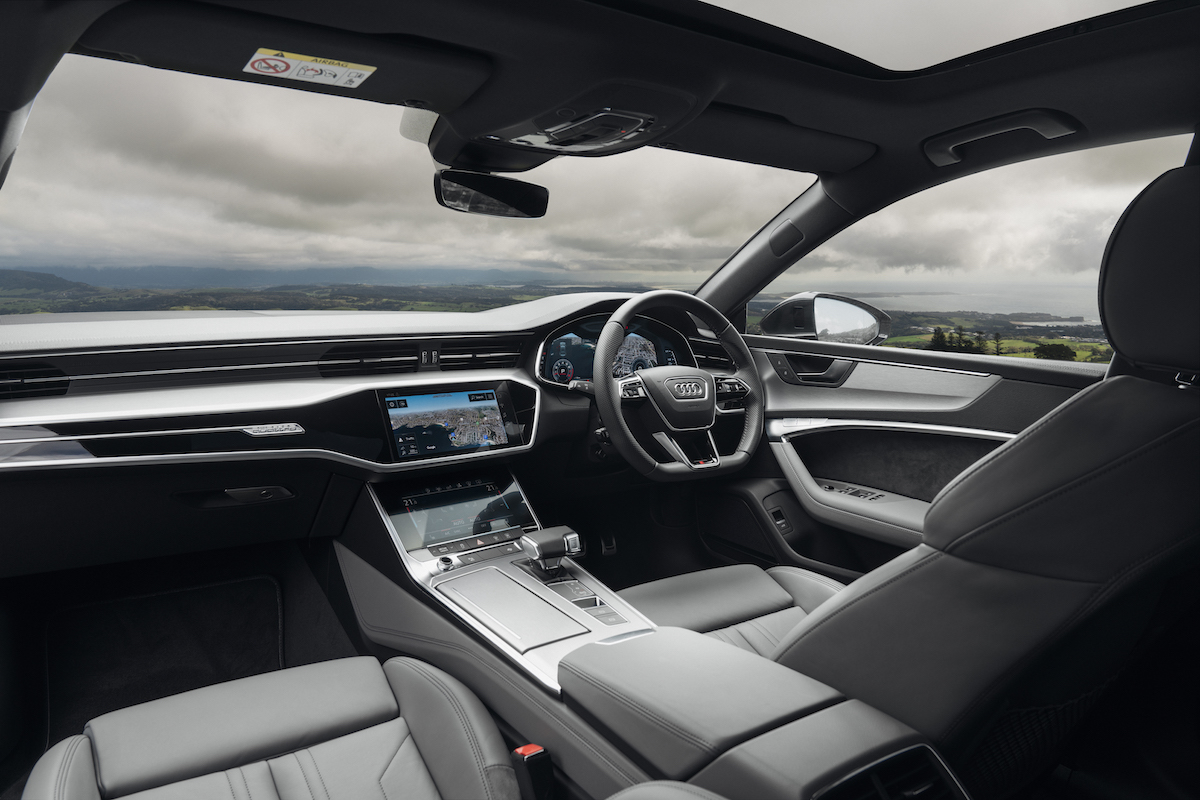 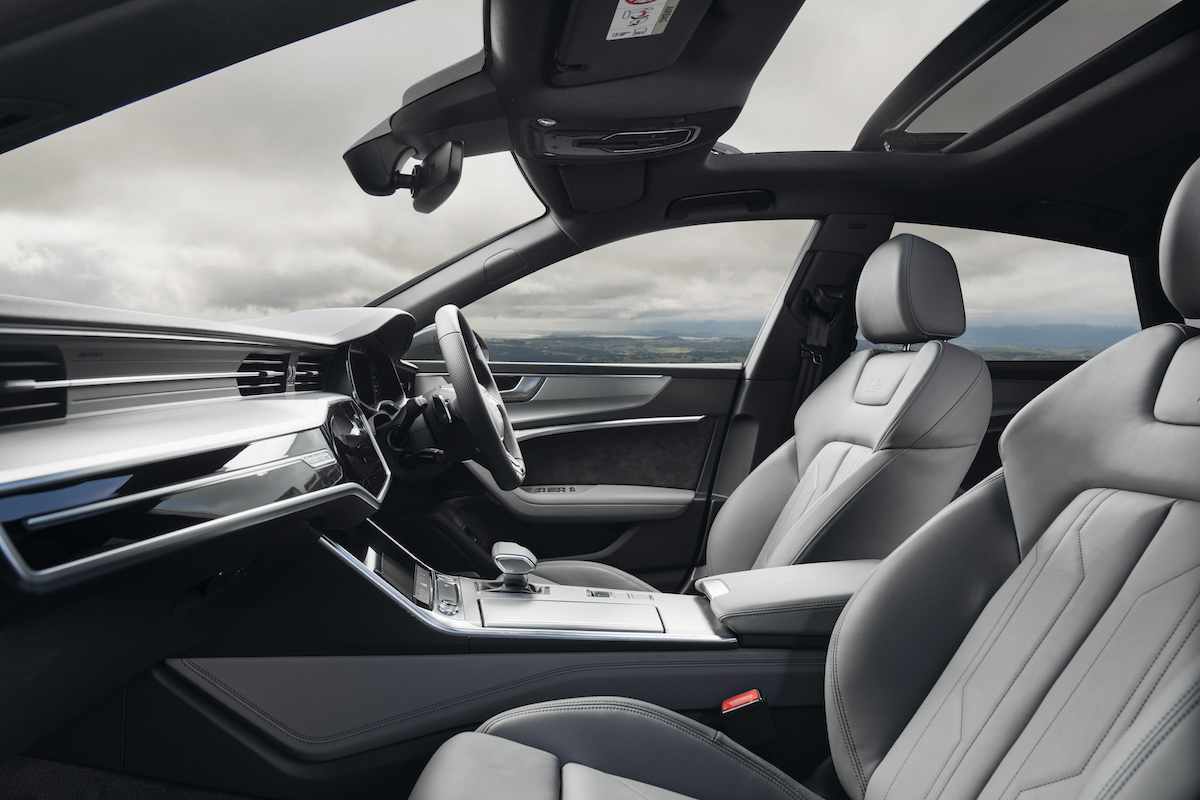 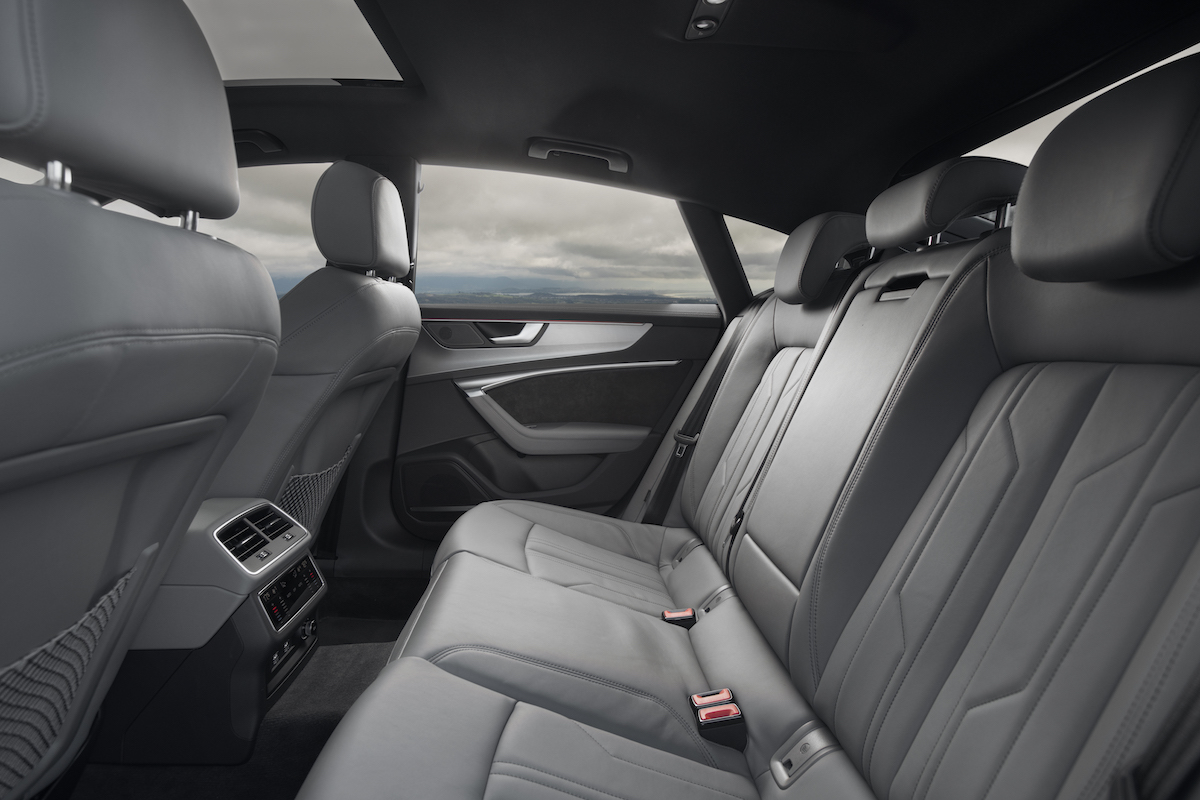 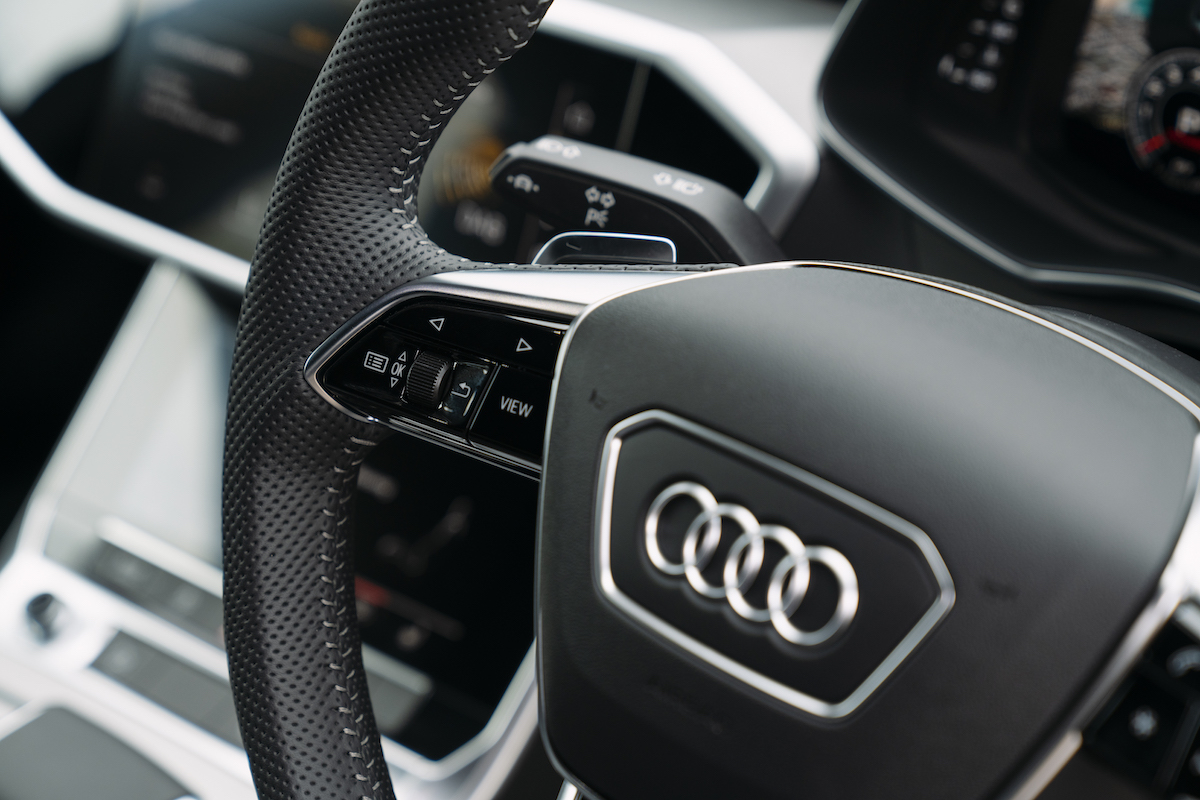 At higher speeds than that, however, the rear wheels turn ever so slightly in the same direction as the fronts, for better high-speed stability.
In practice, what this provides is sharper and more effortless turn-in to corners, and an overall steering and handling experience that is truly balanced between weight and ease (Dynamic Steering also features variable ratios, so the feel through your hands adapt to your circumstances and the way you’re driving).

Drive an A7 with and then without the Dynamic Steering and you instantly know it’s one of those things buyers won’t be able to say no to, because it makes what is an undeniably large car – and thus one with plenty of luxurious space for both front and rear passengers – feel much smaller than it is.

When you’re not in that kind of hurry, however, the top-spec A7 feels both potent and effortless, and the ride quality really does approach limousine levels.

Here, then, is the perfect Audi for someone who isn’t satisfied by the already excellent A6 or A8, or, as Audi would call them, more progressive types.