Experience the shot of adrenaline that is the KTM X-Bow

Finally a car has arrived that provides the thrills that motorcyclists have had to themselves for too long. Jump into the KTM X-Bow. 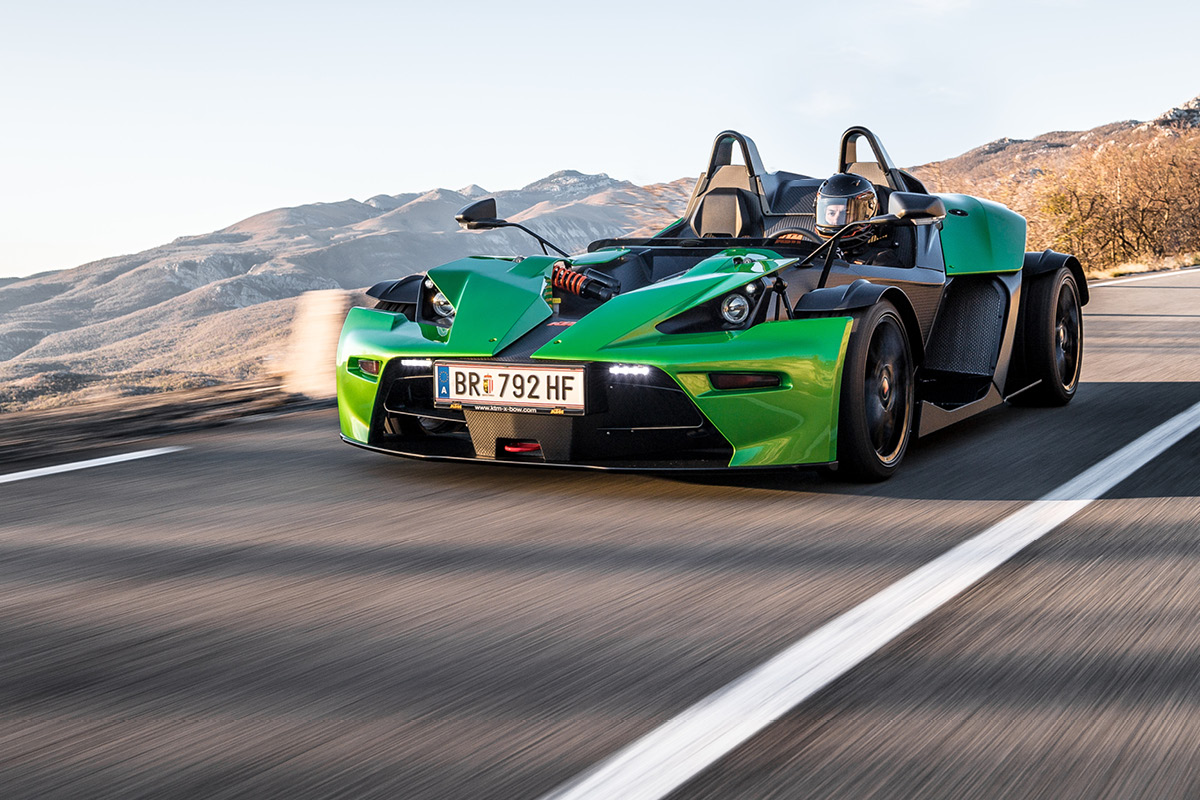 There’s something about being close to death that makes you feel truly, terrifyingly alive, and it’s something that motorcyclists have long known, and like to ramble on endlessly about. Now, finally, a car has arrived that provides that same savage sense of speed – as the road sheers past just inches from your knee – and the feeling that the wind assailing you is some kind of living thing and doesn’t like you very much.

The KTM X-Bow does this brilliantly because it has been devised, and largely built, by an adventurous Austrian motorcycle company (the engine and gearbox are borrowed from Audi).The X-Bow (pronounced Crossbow) looks like a Transformer called Wasp, and is missing a lot of things you take for granted on other cars, like doors, a roof (not even a temporary one), a windscreen, a boot, or anywhere at all to store anything.

Motorcycles do give you an experience that is pure, elemental and engaged with nature – meaning that flies and bugs can smack you in the face at 100km/h, which will make you swear – but their real party trick is all about power-to-weight ratio. Because there is nothing of them, bikes with even a middling engine can accelerate in a way that makes even super cars feel a bit mundane. 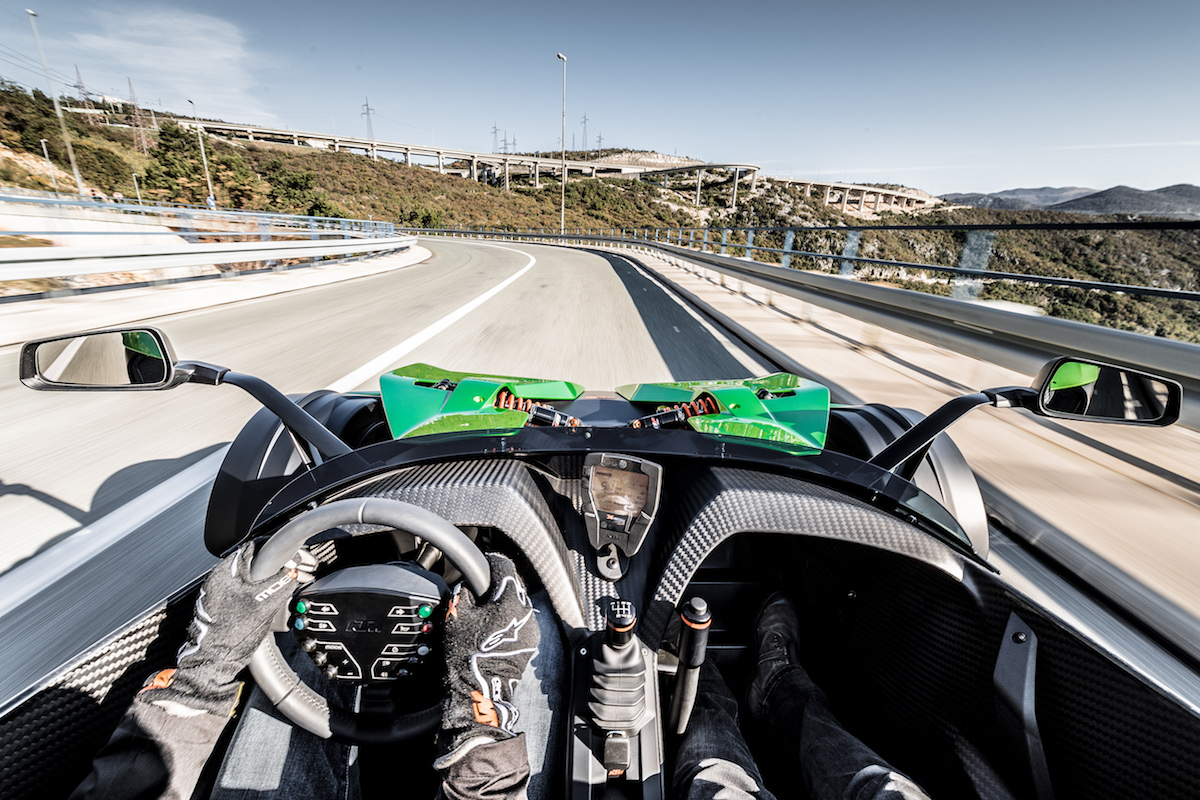 KTM has taken that magic and applied it to the X-Bow, which, thanks to its entirely carbon-fibre construction, weighs just 790kg. The result is staggering, screaming, eye-streaming acceleration. The zero to 100km/h dash takes just 3.9 seconds, yet feels even faster, but it’s the way it can go from 100 to 200km/h that really gets your attention.

If that suggests this is more of a track weapon than a road-going car, it is. Yes, you can drive the X-Bow on public roads, but on freeways or in traffic you’re going to be uncomfortable, choking on fumes and spitting out gravel, and very, very wet if it rains. On a track, though, or once you’ve gotten to your favourite stretch of windy road, there is simply nothing with four wheels that gets close to providing the kind of adrenal-gland explosion that you get from this crazed X-Bow. It truly is a weapon.

Rules of the road

The X-Bow was launched to the rest of the world back in 2008, going on to win TopGear’s Sports Car of the Year award, but it has only just gone on sale in Australia. That’s because getting the vehicle passed to drive on our roads under the Australian Design Rules has been both a lengthy and expensive process, according to the car’s importer, Simply Sports Cars in Sydney.

The KTM was eventually allowed in under the Special Enthusiast Vehicles Scheme, which means the company can only sell 25 of them a year, at a price of $169,990. Initial interest in the car, from buyers around the country, has been intense.

One of the things that makes the KTM genuinely invigorating to drive is that it has none of the electric aids we take for granted on modern cars, like traction control or anti-lock brakes. This means your life is very much in your own hands, or feet, and that you will, from time to time, stop breathing. Brakes that lock up if you hit them too hard went out of style last century, so they really take some getting used to. 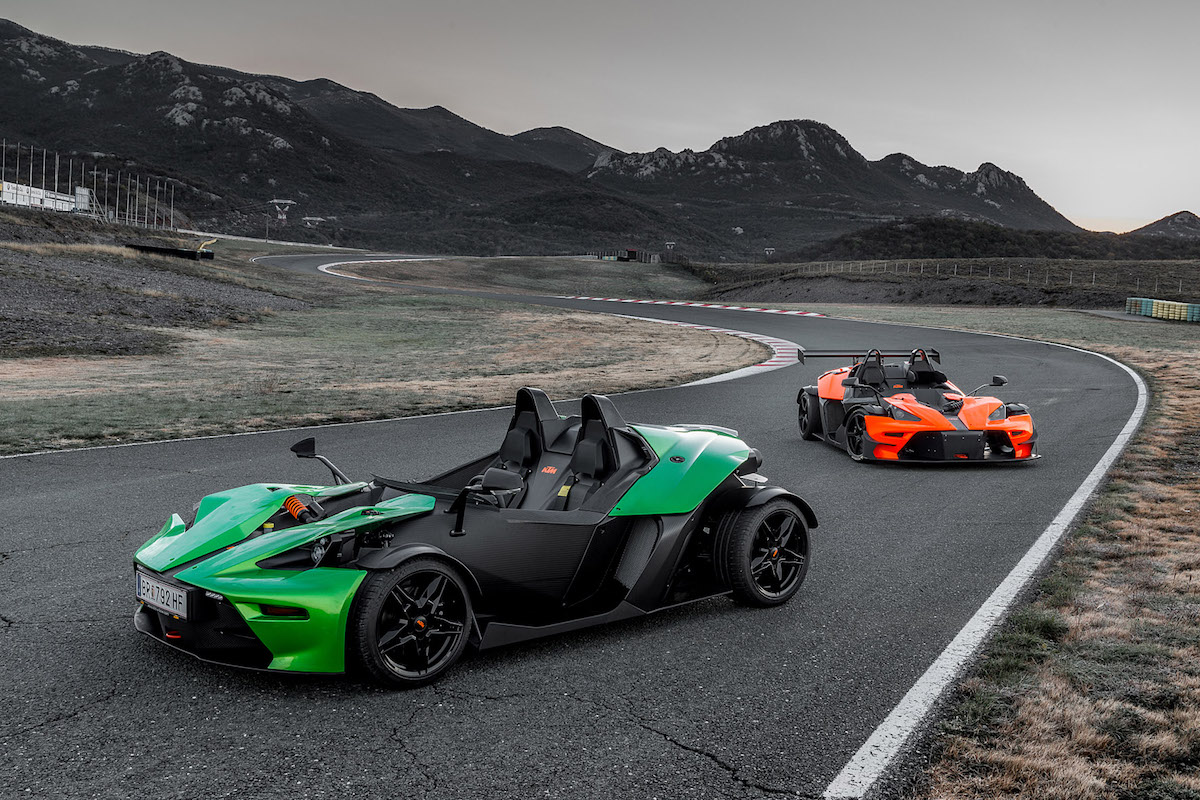 The need for speed

All those fins and flaps on the KTM aren’t just for decoration (they’re not pretty, for a start); they actually provide significant downforce at speed – up to 200kg of it at 200km/h. Downforce shoves your car, and its tyres, down into the road, making it possible to corner far, far faster than any motorcycle ever could.

The KTM uses a 2.0-litre turbocharged four-cylinder engine and a six-speed manual transmission sourced from the excellent Audi S3 sporty hatch. Its impressive 220kW and 400Nm are sent to the rear wheels only through a limited-slip differential. Its top speed is a very loud 230km/h.

Getting in or out of the KTM X-Bow is a bit like getting into a kayak, although probably wetter if it has been raining. The cabin is tiny, the racing-harness seat belts are infuriating, and the handbrake is in the passenger footwell, which is just awkward. One very nifty and genuinely race-car-like touch that makes life slightly easier for the driver is that the steering wheel pops off and can then make an interesting accessory or conversation starter.