This blue coupe may have an M-badge, but its completeness makes it a modern classic. 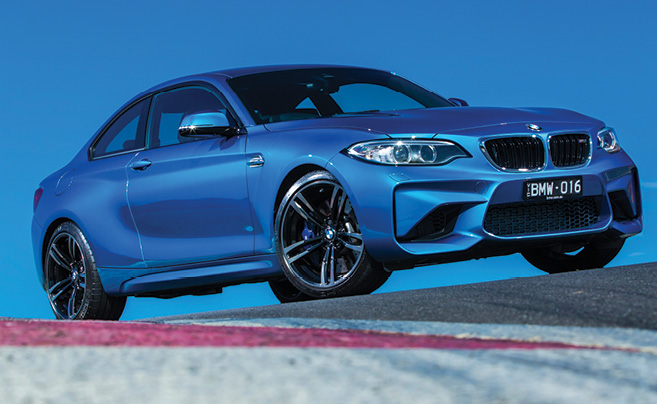 What gets bigger the more you take away from it?

A hole. Dad jokes aside, what gets better the more you take away from it? A BMW M car.

It’s widely recognised that the BMW M3/M4 siblings are among the best value sports cars on the market today. With tonnes of grunt, brilliant steering, grippy handling and rear-wheel-drive, they blend ability and everyday usability in a delectable package. But to take something away seems like a recipe for disaster. After all, what could be removed to improve what’s arguably the most complete automobile on sale? One word: weight.

As the late Colin Chapman once said, “Adding power makes you faster on the straights. Subtracting weight makes you faster everywhere.” So, rather than trying to take all the luxury out of the M4 Coupe to shave off the kilos, BMW’s aim was to create a smaller, lighter M car. And the 2 Series is the perfect candidate, as it’s set up to be rear-wheel-drive from the get-go.

The formula is simple. Flare the wheel-arches, widen the track, stiffen the suspension, add a super tricky diff, and shove in a powerful engine. Of course, this is an oversimplification, but the result is absolutely more than the sum of its parts.

Under the long bonnet lies another iteration of the twin-turbo six-cylinder that BMW is renowned for. In M2 guise, the thoroughly reworked N55 engine makes 365bhp and 465Nm. They’re not massive figures in this world of 500hp-plus machines, but the M2 is capable of sprinting to 100km/h in just 4.3 seconds. Sure, there are quicker machines out there in a straight line, but launching from a standing start doesn’t give you a real appreciation for how ferocious its rolling acceleration is.

It piles on the speed and reels in the horizon at an eye-widening rate, the rear wheels squirming as they try to deal with all that torque being delivered to the tarmac. This top-end acceleration is hilarious, but it would be quite alarming if it wasn’t for the fact that the M2 is equipped with massive brakes. With 380mm front and 370mm rear discs (which are cross-drilled with M-specific brake pads), there’s a reassuring amount of bite, and the pedal-feel is excellent.

Backing up the motor is a seven-speed dual-clutch transmission which left to its own devices behaves just like any other auto. The difference comes when you choose Manual mode. Push the lever across to Sport mode, pull one of the paddles, and you get complete control. Suddenly, under load, the shifts sharpen dramatically — accelerating each successive ratio feels like a huge shove in the back; there are no slurred shifts here. It’s a Jekyll and Hyde transformation that doesn’t require fifty switches to be pressed to activate. One simple movement and you’re into the quickest setting available.

That dual-clutch transmission also has some impressive functions stored in its electronic brain, with “Launch Control, Stability Clutch Control, Creep on Demand” all buried in its settings. Then there’s “Smokey Burnout” mode. Yes, that is indeed the official BMW name for that mode.

But rather than driving around destroying tyres, the M2 can be driven in such a way that it becomes a devastatingly quick track car. Thanks to its suspension, it can be thrown into corners (using its pin sharp steering to communicate how those front wheels are gripping) with the initial part of the spring travel absorbing most of the weight transfer. It then progressively gets harder as it compresses, transferring the G-forces and crushing the tyres into the road. Yet because its spring rates are so well judged it doesn’t ride like a Group B rally car. Sure, its focus is on handling, meaning the ride is on the firm side, but it doesn’t crash over sharp ridges or crash over potholes. Rather, its spring and damper combination work in unison to absorb big hits and provide a beautifully balanced machine.

Also helping here is the M-differential. Because it works on torque delivery and electrically controlled clutches, it taps into the yaw rate sensors, meaning it knows exactly whether you’re gunning for maximum grip or maximum slip. Call on it to hang onto the road and glue the back end down like the tyres are made from Velcro. Push a bit harder and it recognises your mirthful intentions and once the slide starts it locks up both wheels so you can progressively play drift king for as long as the road or rubber allows. And it’s so communicative; any monkey can master it.

As a sports car for under £50K, there’s not much that can touch it. Surely there are negatives, though? Well, the interior doesn’t quite reflect the price tag, with some cheap plastics dotted about the place. And the back seats aren’t exactly expansive, but they’re fine for either a (very) short stint with a couple of adults or two kids.

Apart from that, the M2 covers all bases. It can be driven sedately, or hammered in anger. It can satisfy your craving for speed, yet it’s comfortable enough to take to work and back. It can be quiet, or sing to the heavens with its glorious six.

BMW really has nailed it with this one; the M2 is perhaps the most complete sports car this side of a Ferrari. Not only is it the best M car in years, it is arguably the best car you can buy this year.