We explore the enticingly simple concept of Fujisaki with an explosive multi-course meal. 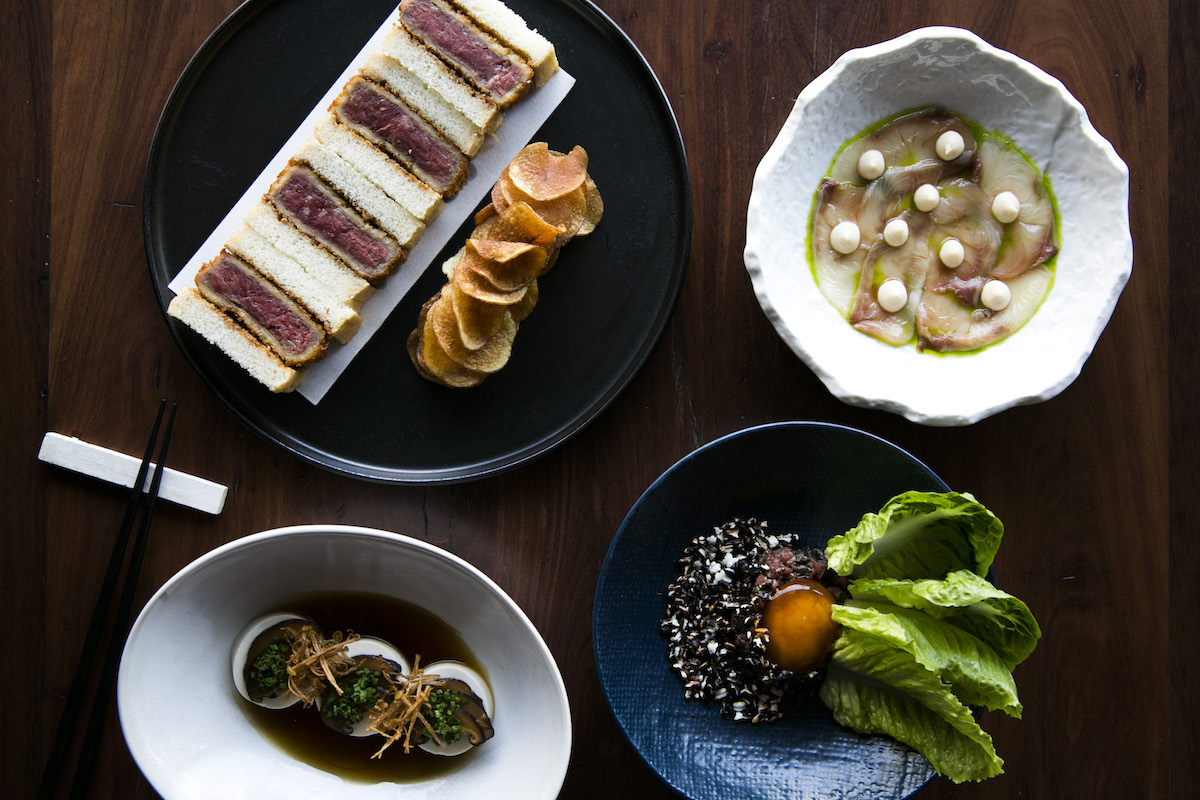 Sitting on a royal blue velvet bench under a gold marble ceiling glittering in the afternoon sun was the perfect setting in which to watch talented Japanese chefs attentively apply knife strokes with finesse.

Fusing Asian and Eastern traditions into edible works of art for a true gastronomic experience is the essence of Fujisaki.

Situated in the tranquil harbour precinct of Barangaroo in Sydney, Australia, is the picture-perfect Japanese restaurant that’s encouraging you to leave your desk for a long lunch and takes your tastebuds on a tantalising adventure.

With ink-black chopsticks at the ready, we tucked into the decadent two-hour course of luscious seafood and whimsical creations crafted for The Art of Lunch , which exceeded expectations. 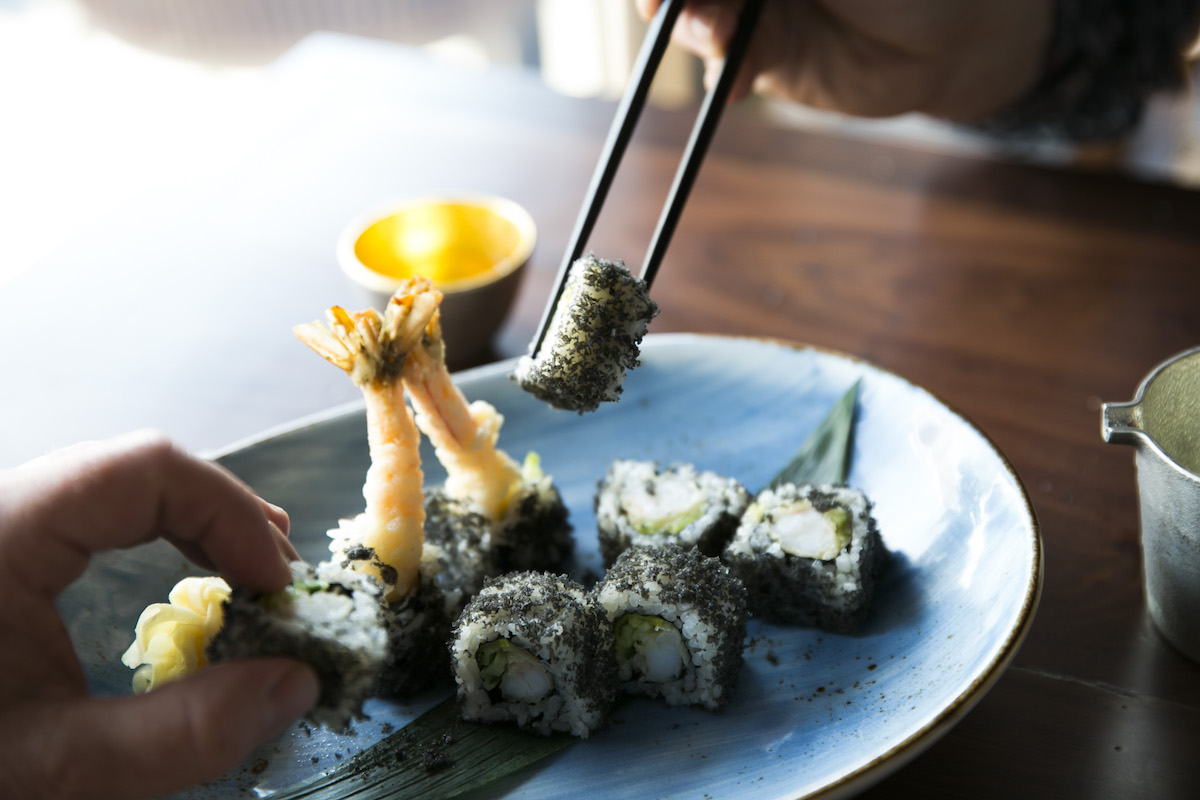 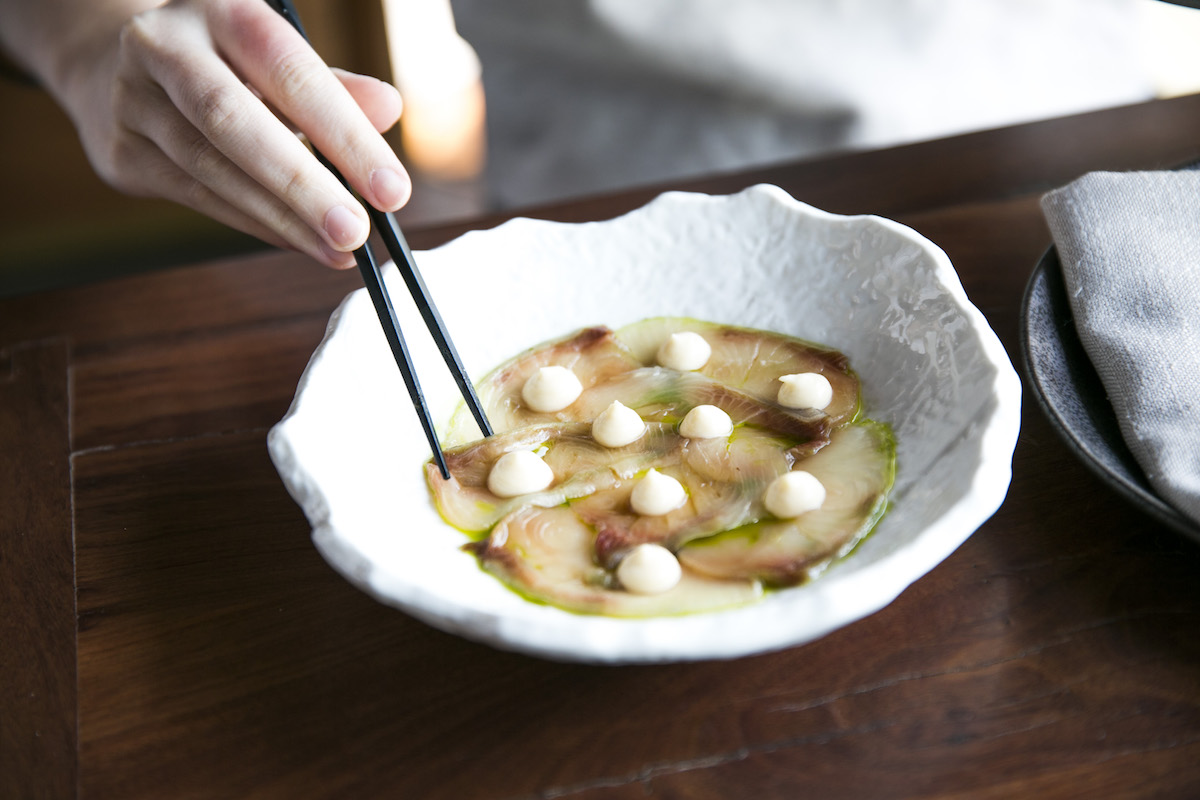 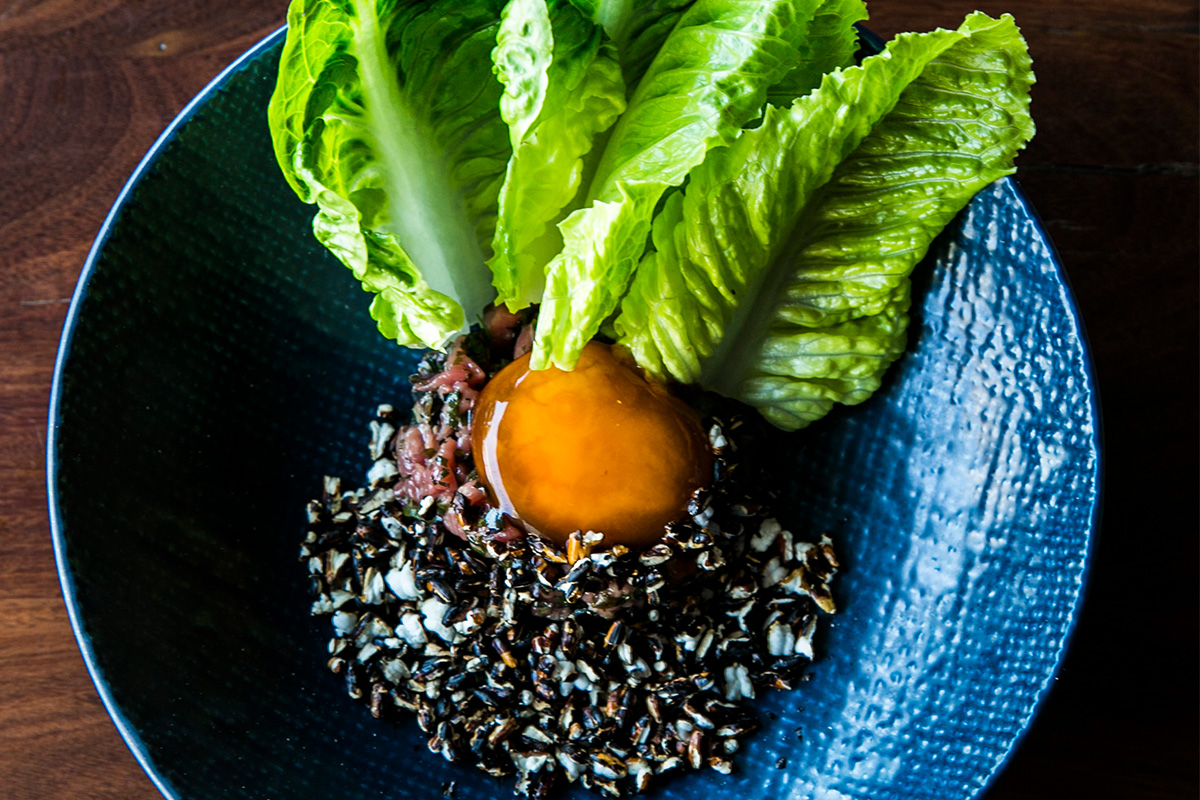 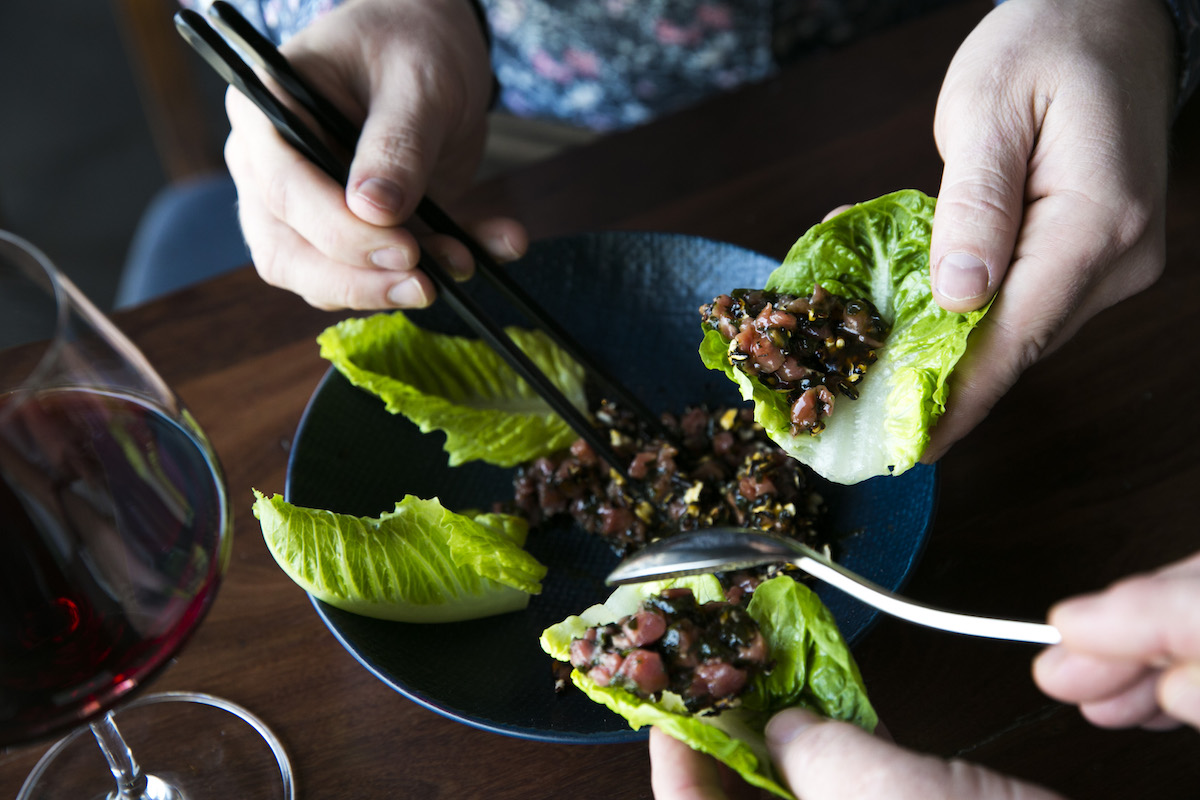 The dish is best enjoyed with the soft, creamy yolk mixed into the beef before scooping it into each lettuce cup Elegant slices of scallop and tuna were simply paired with precisely cut lemon wedges. A dainty mint leaf and a dab of wasabi complemented the fresh seafood but allowed it to shine on the charcoal slate dish. This set the tone of what was to follow.

A made-to-order tamagoyaki (omelette) eight-piece sushi roll was refreshing but was easily outstaged by the ebi (prawn) eight-piece sushi roll. Each ebi roll incorporated fried squid ink, creating a speckled appearance on the white rice, while magnificent prawn tails stood out from two of the rolls. The warm sensation of freshly fried crustacean was unexpected, but a delightful surprise upon the first bite.

The quaint timber table for two was quickly flooded with small plates and bites, which included kakiage (king prawn fritter with kewpie and hot sauce), octopus skewers with guanciale and chilli, kobujime (lightly cured kingfish with beer ponzu and prawn anglaise), and Japanese fried chicken – all perfect for sharing.

But the star of the show was the steak tartare. Served in a navy-blue bowl, the MSA9-grade Wagyu beef shone with a raw marinated egg nestled in the centre and puffed rice sprinkled on top as cos lettuce cups gently stood to the side. As recommended, the dish was enjoyed best with the soft, creamy yolk mixed into the beef before scooping it into each lettuce cup – and eating with hands was a must.

Inspired by German, French, Australian and Japanese cuisines, the steak tartare was a prime example of Fujisaki’s divine execution of cultural fusion. And it was far from stopping there.

A rich pork jowl roasted with crackling served on top of kimuchi was next out the kitchen, accompanied by kipfler potatoes twice cooked with furikake and spring greens, which aren’t nearly as simple as you would first think. Fujisaki's signature dish: salmon baked in cedar with wood ear mushrooms is served on a bed of cedar wood and is set on fire before serving 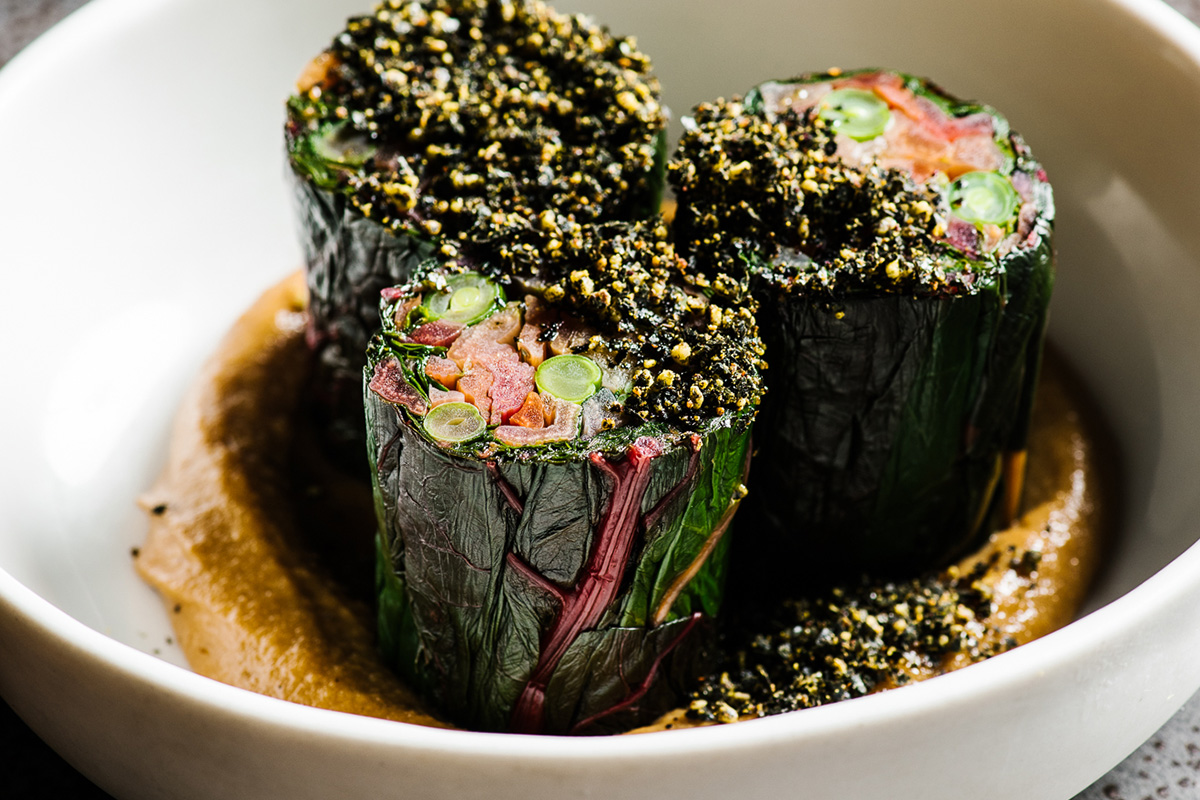 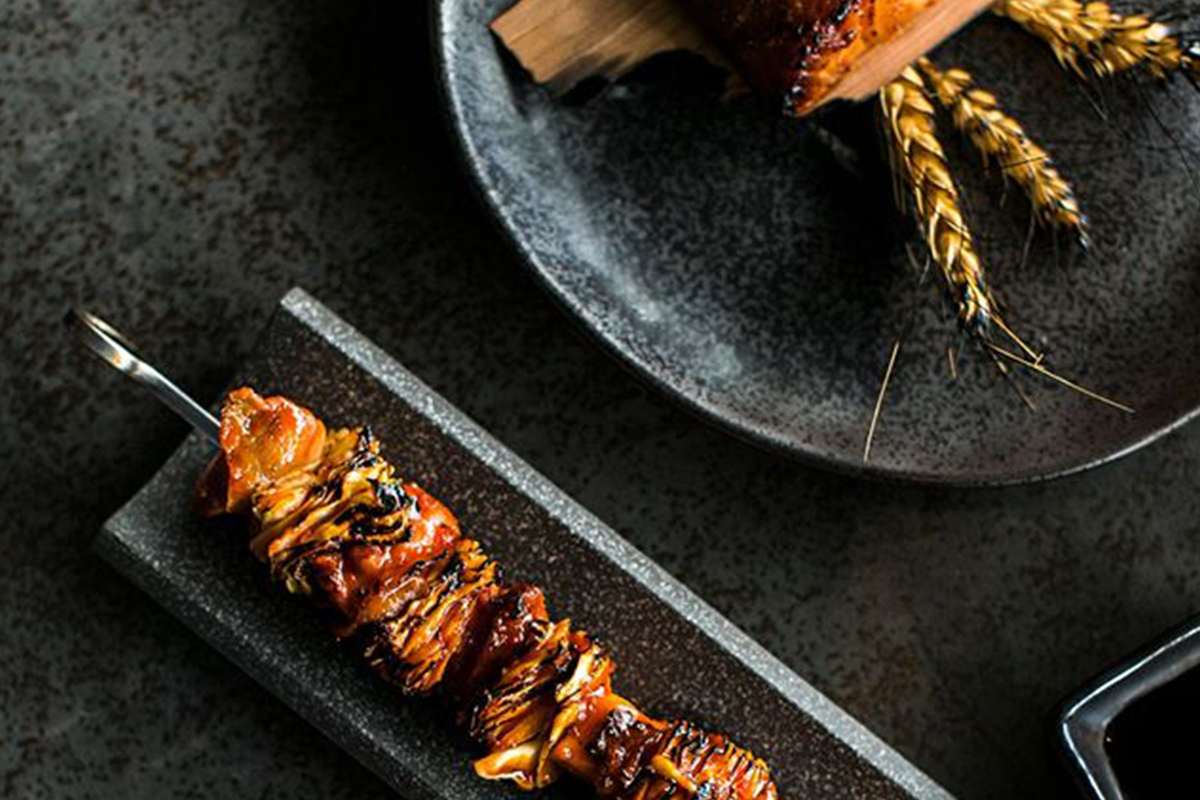 Octopus skewer with guanciale and chilli 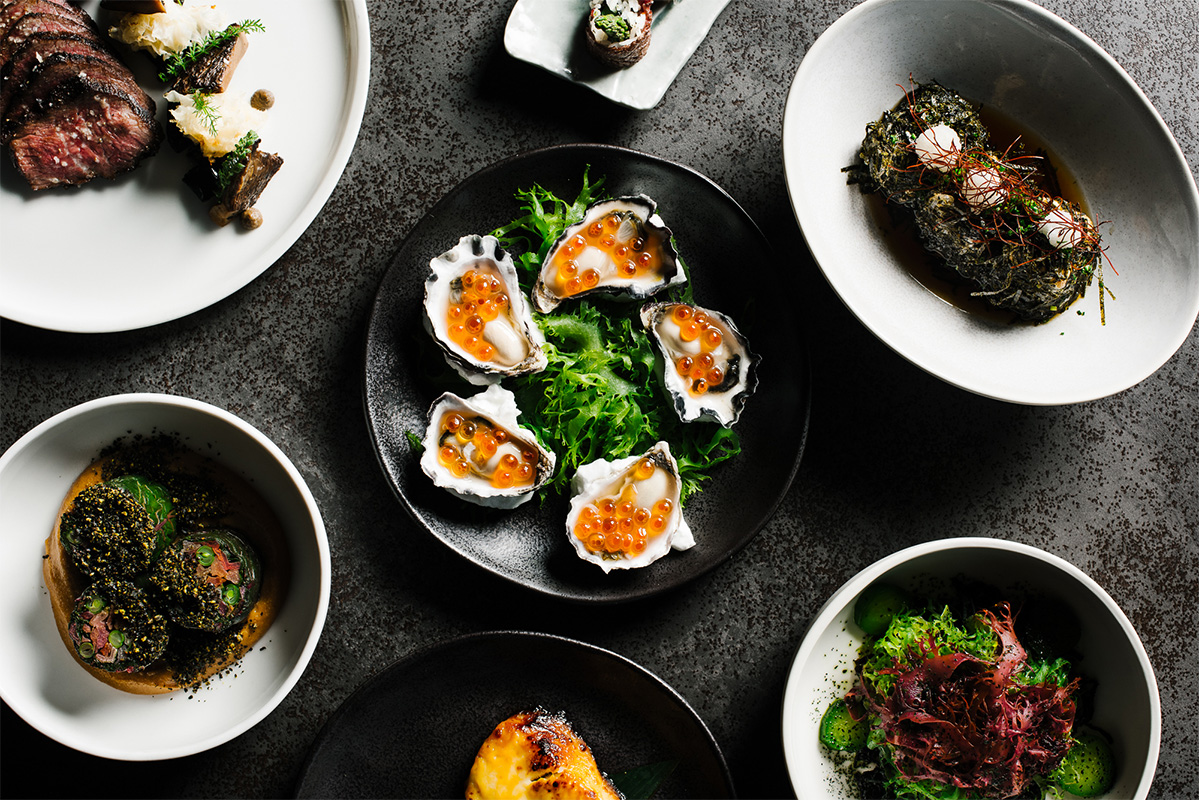 Fujisaki's delectable dishes are ideal for sharing among friends 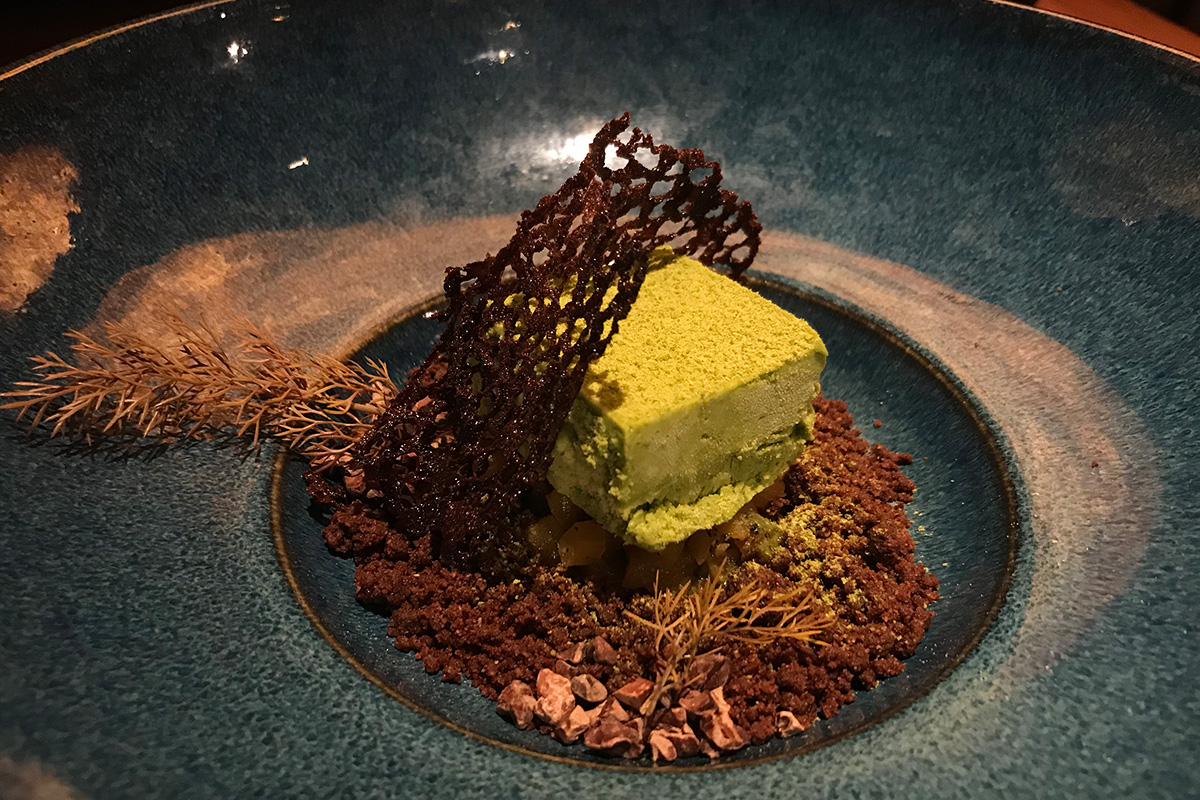 Standing elegantly in a sea of goma (sesame seed) dressing were three round tubes filled with green beans and rainbow chard stalks held together by the vegetable’s leaves, looking much like spinach. Breaking into a roll causes an explosion of colour to burst onto the plate. The best way to appreciate the nutty edge of the not-so-humble spring greens is to delve straight in and make a mess – or so the waiter suggested.

Giving the steak tartare a run for its money was Fujisaki’s signature dish, salmon baked in cedar with wood ear mushroom. The glazed baked fish is presented on a bed of wheat and cedar wood that is then set on fire right before serving to create a unique smoky flavour and decadent aroma – it’s a dish you smell long before, and after, you feast your eyes on it. The rubbery texture of the wood ear mushroom was an unusual but delectable addition.

If you manage to have some room left over, the multi-course meal is topped off nicely with a light, and aptly sized, coral and moss matcha parfait. Sitting on a bed of chocolate, roast vanilla bean crumb and roasted pineapple, the striking green cube was effortlessly devoured in a few spoonfuls. 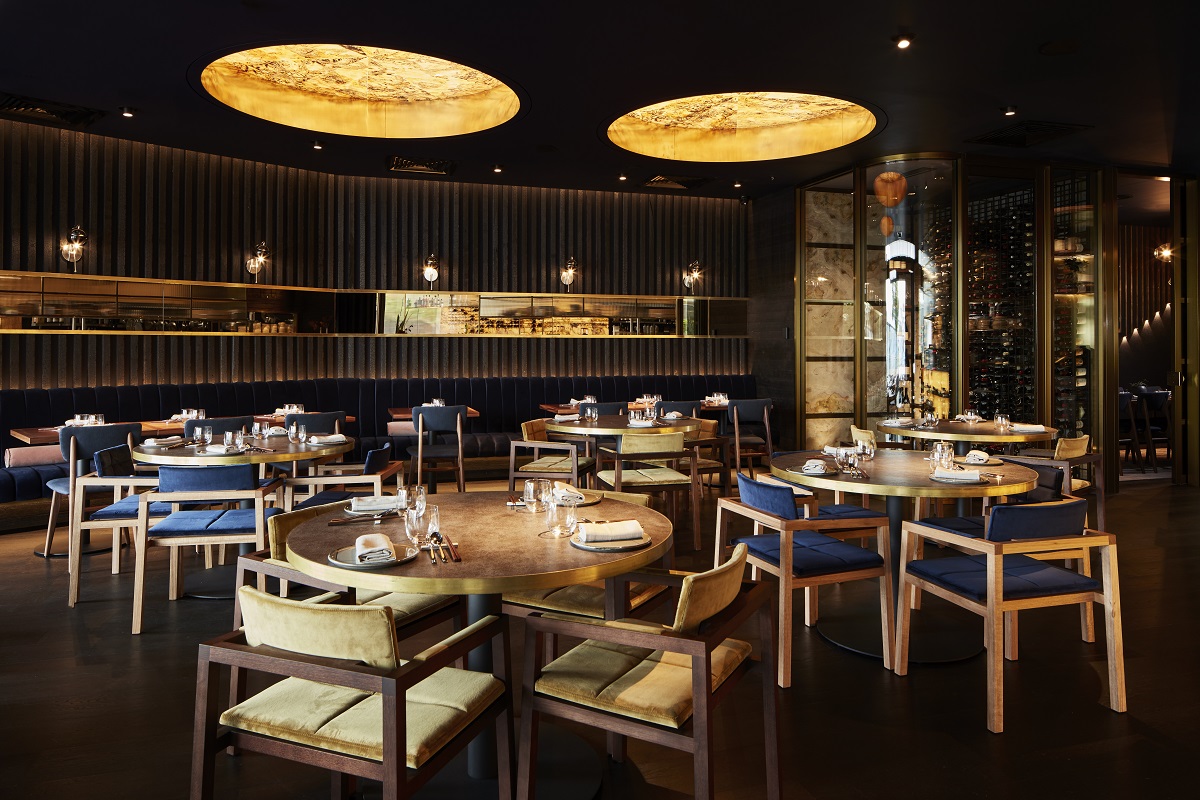 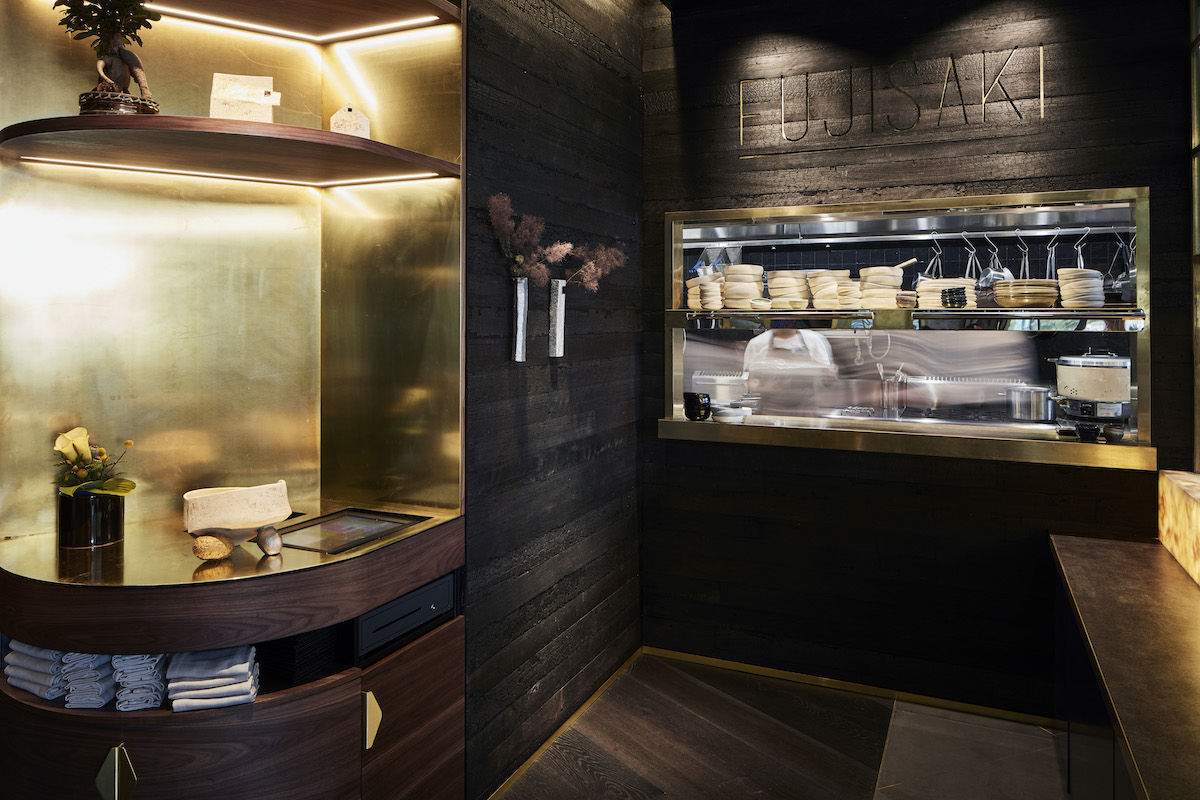 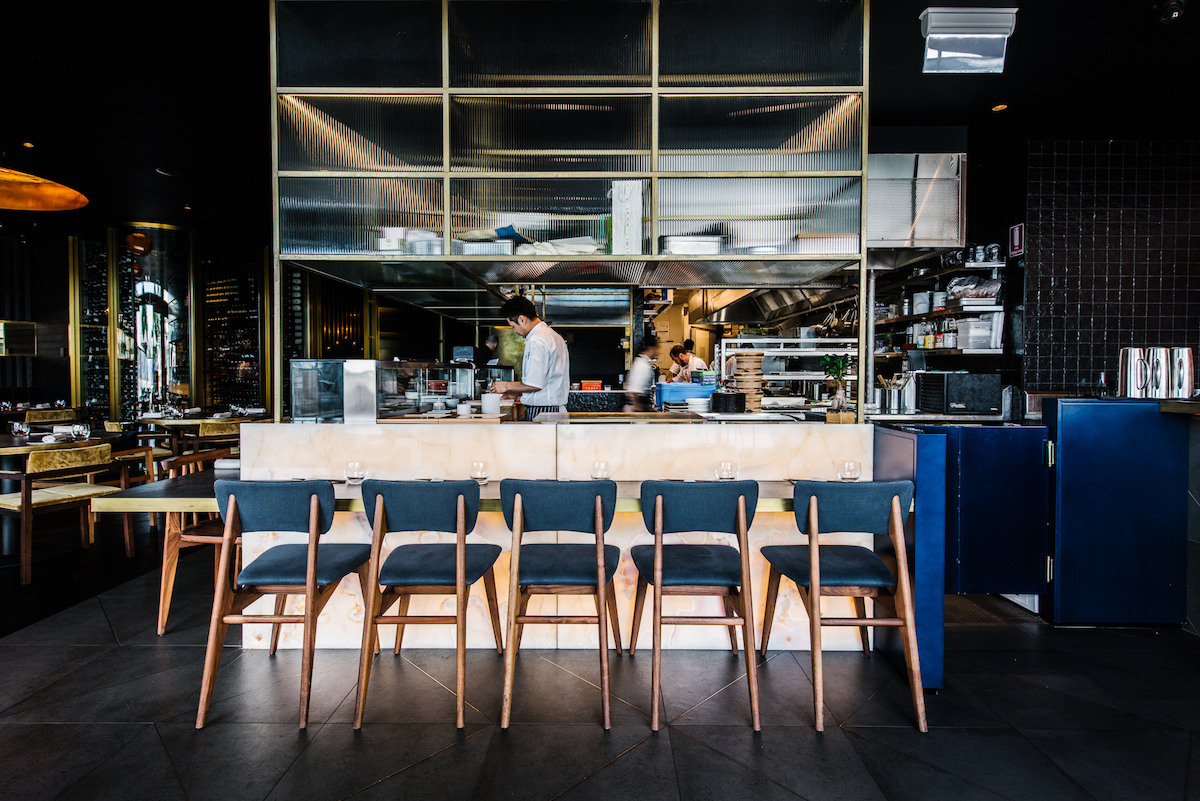 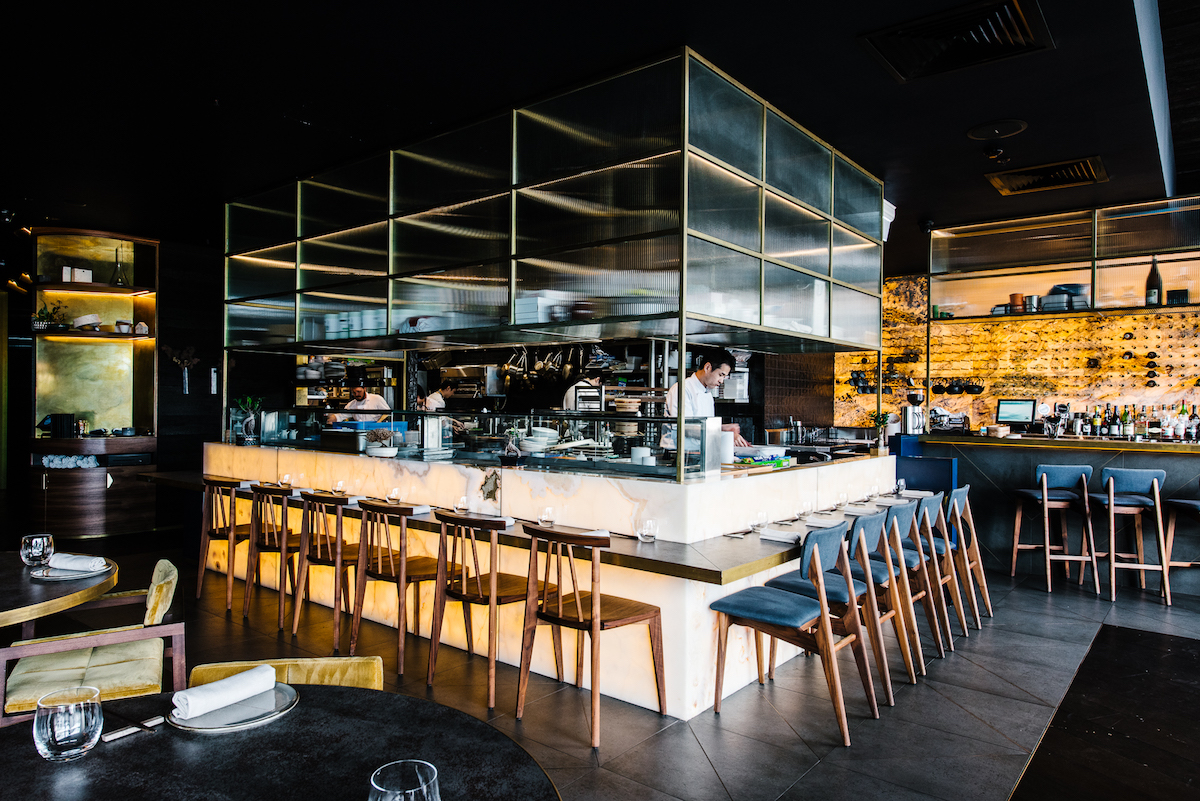 The delightful gastromic experience was a fine example of what future lunches should capture – an event rather than something rushed in front of a computer screen. The Japanese restaurant, owned by Lotus Dining, wants to teach Australians the Art of Lunch , a cultural practice designed to keep people healthy both physically and mentally.

While thousands of office workers nibble on an al deskco lunch, Fujisaki is on a mission to encourage everyone to eat lunch with friends for a ‘brain break’ for an hour every day.

In Western countries, more than 40% of workers skimp on their lunch break. In Japan, however, nourishing the body with real meals and moving away from screens is a priority. It’s no wonder the nation has one of the longest life expectancies in the world.

Now, if the elegant meal created by the talented chefs is anything to go by, enjoying the Art of Lunch is definitely something to get on board with. Today.