Skincare to opulent delicacy: your ultimate guide to caviar

From La Prairie harnessing its powers in results-driven skin care to being eaten as a superfood, the benefits of caviar are endless. Precious pearls, golden orbs, lusciously edible jewels of the ocean – these are just some of the monikers for the world’s most expensive caviar. Although it wasn’t always considered a delectable delicacy – it was once used as food scraps for farm animals in Russia.

Cured roe has been a source of nutrition for millennia, starting with the Persians who discovered the treasure in the fourth century.

From being consumed for extra strength before warrior battles and being used medicinally to La Prairie capturing its powers in the iconic Skin Caviar collection – including the newest innovation of Skin Caviar Nighttime Oil – the history of the marine pearls is a colourful one.

While much of the global population knows what caviar is, Gourmet Providores Group Caviar Ambassador Lisa Downs says 90 per cent of the information people believe to be true about cured roe is actually incorrect.

“Most consumers believe caviar originated in Russia. It was actually the Persians who were the first people to begin curing the roe of sturgeon,” Downs shares. “It wasn’t even until the 12th century that Russians began to fish for sturgeon, and it wasn’t the caviar they were interested in; it was actually the sturgeon meat.

“As the popularity of sturgeon increased, so did the price.”

The world’s most expensive caviar has a unique ability to transcend cultures. From Europe to Asia, the delightful delicacy is desired by billions.

Deciphering the most expensive caviar

Debunking caviar misconceptions, Downs shares her expertise on one of the world’s most luxurious foods. Where does caviar come from?

True caviar is only produced by sturgeon – a type of fish dating back 250 million years, making it one of the oldest living things on Earth.

“There were actually sturgeon swimming around long before dinosaurs,” Downs says. “It has only taken humankind the last 120 years to push a number of the 27 types of sturgeon onto the endangered species list.”

In 2008, the Convention on International Trade in Endangered Species of Wild Fauna and Flora made it illegal for commercial and recreational sturgeon fishing. People caught with sturgeon are jailed for five years and fined.

“It’s been a successful ban, with only about four to five per cent trade in the black market,” she says.

Who produces caviar? Prior to the ban, Russia’s Black Sea and Iran’s Caspian Sea produced 90 per cent of the world’s caviar. Today, sturgeon is farmed globally with China being the largest volume producer of caviar followed by Italy and France.

How did caviar rise in popularity?

Following the 13th century Mongol invasion of what is today northern Russia, its locals were taught how to farm sturgeon roe. Due to the abundance of fish, villages could be fed for months just from the haul of one day’s fishing. The newly sanctioned very cheap, accessible protein immediately became a hit with Russians.

“A lot of old Russian recipes actually show you how to use caviar as a fat source in cooking because it was much cheaper than buying butter,” Downs says.

However, as sturgeon became more popular, prices gradually increased. By the 14th century, the cost became too much for the common Russian to afford. To allow its people to still enjoy the delicacy, the Russian Orthodox Church made it a specialty to be served to all on religious feast days.

After a young Czar Nicholas of Russia was introduced to caviar as a child by the monks who looked after him, he soon acquired a taste for the cured roe. His adoration led to new taxes being put on the nutrition sources when he took up his reign, putting it further out of reach for the common people.

“The glorification of caviar moved from being a very common food to being a food designated to only being eaten by the royal family of Russia,” Downs explains. “Over the 27 years of Czar Nicholas’s reign, it was enough time for wealthy and educated Russians to become enamored with caviar.”

This fascination with caviar began spreading to the rest of the world when, following the Russian Revolution in 1917, the delicacy was marketed to affluent Europeans and North Americans. Demand soon outstripped supply, pushing prices up and making caviar an expensive luxury for only the wealthiest customers.

How to eat caviar 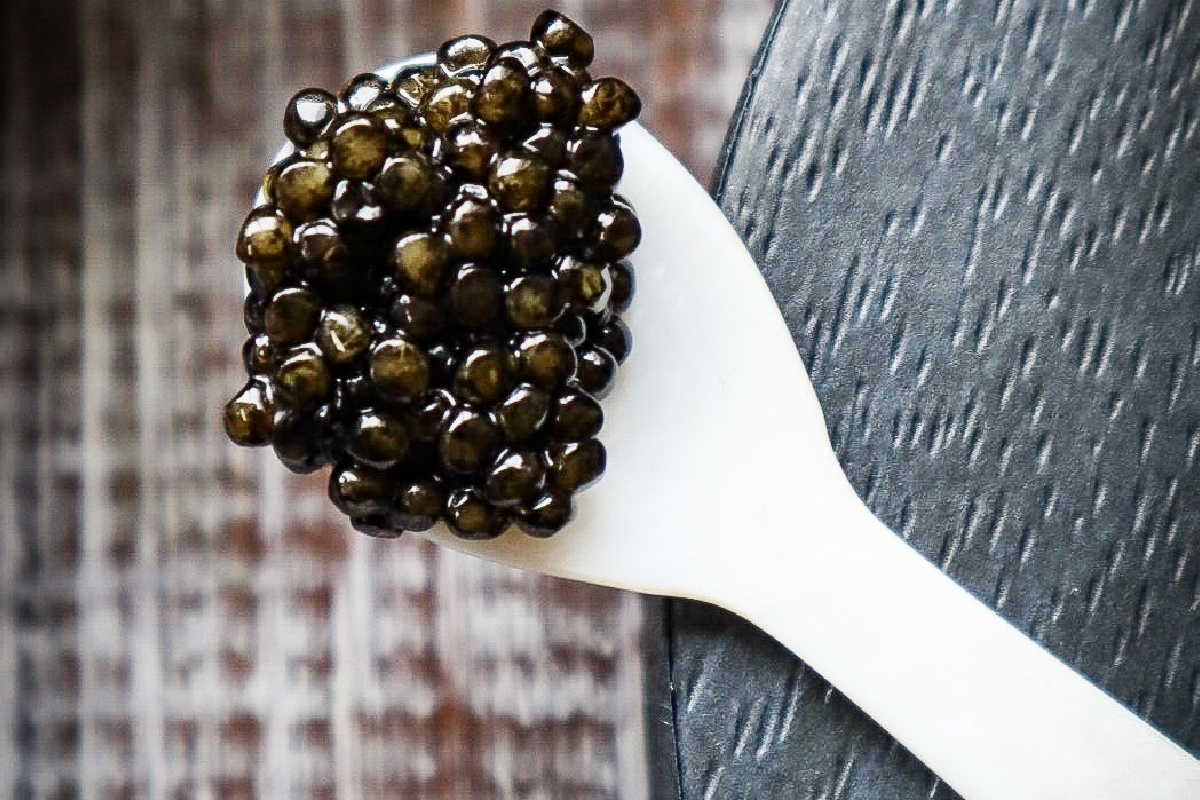 “With a traditional caviar tasting, we would recommend you cleanse the palate with a little shot of vodka first,” Downs says.

The classic way to eat caviar is to use a mother-of-pearl spoon to scoop the cured roe from the tin onto the top of your hand, between your thumb and forefinger. Then wait until the caviar is no longer cold before licking it off.

Stored at –4°C, caviar is kept cold to contain the fats and lipids within each membrane. However, to eat caviar, the fats need to be warmed up to blood temperature for the ultimate flavour journey.

“It’s almost like eating two different things – to eat a very cold caviar, then to eat it at blood temperature,” Downs says.

You can also enjoy the world’s most expensive caviar with a glass of Ruinart along with blinis and creme fraiche.

An initial burst of salt explodes on your palate, disappearing quickly into a buttery and creamy sensation.

Russian Oscietra: considered the second-best caviar in the world

Produced by a nine- to 13-year-old sturgeon, the pearls have been maturing longer, making for a slightly more intense experience.

One of the most expensive caviar options on the global market isn’t expensive because it tastes exceptionally unique; rather, it’s price is due to the fact that the sturgeon producing it is the largest of its kind. A Beluga sturgeon won’t produce roe until it’s about 21–24 years old – and they can live upwards of 120 years.

“A definitive way to tell Beluga caviar against any other caviar is that it has a little tiny eye in every pearl,” Downs explains. “If you’re served Beluga caviar at a restaurant and it’s jet black and there’s no eye in the pearl, pop that lid back on and send it back because it’s absolutely not Beluga.”

Almas caviar: the most expensive caviar in the world

Also known as 24-carat gold caviar or black gold, the cured roe sells for more than US$30,000 per kilogram. The unique produce is only produced by a genetically albino sturgeon, or extremely old sturgeon – making it exceptionally rare.

“If you have to push the caviar against the roof of your mouth, that would mean the caviar has been pasteurised.

“When you actually taste caviar when it comes straight from the sturgeon, it actually tastes like nothing. It’s very bland. So it’s all about the amount of salt we use and the length of time we leave it in the origin – or mother – tin to let the salt interact with the fats and develop the flavour.”

What has caviar been used for?

in Persia they would feed their ill caviar to build strength in their immune systems.

it has 45 vitamins and minerals, all the omegas, magnesium, zinc, amino acids – all helping to protect your neural pathways, heart and circulation.

not only does its nutritional powers benefit you if you eat it, but it also has proven cosmetic advantages pioneered by La Prairie. The benefits of the world’s most expensive caviar extend far beyond simply being a highly aspired superfood.

No brand understands this sentiment more than La Prairie. Having first injected the exceptional benefits of caviar into its pioneering skin caviar product in 1987, the company’s skilled scientists have spent decades working to embrace the golden elements of the cherished ingredient.

“The La Prairie scientists have pushed the boundaries once again and discovered caviar has pure, natural, retinol within it,” says Belinda Besant, La Prairie’s Education Director. “We know retinol is a very coveted ingredient. Knowing the retinol was actually derived from caviar makes it unique.”

Boasting caviar lipids, vitamin D and omegas 3, 6 and 9, the caviar retinol is an exceptionally indulgent ingredient that works wonders on smoothing out lines and wrinkles while firming, soothing and plumping the skin.

Putting the dark of the night to work, the Skin Caviar Nighttime Oil is a potent formula featuring naturally derived retinol (as opposed to synthetic retinol), which means it can be used every night in place of your evening moisturiser. Because our skin produces 25 per cent less oil at night than it does during the day, it creates the perfect opportunity for the caviar retinol to work its age-defying magic.

“While we’re busy sleeping, our skin is working,” Besant explains. “During the day, our skin is in protection mode and we produce oil to protect our skin, whereas at night-time, our skin barrier becomes more permeable.

Due to the intricate nature of the caviar, the Swiss maison took extreme measures to ensure the components were harvested without interrupting the overall efficacy.

“Retinol is a very fragile ingredient, so the first achievement was to capture it,” Besant explains. “It’s been extracted at room temperature in a highly protected atmosphere aimed at maintaining caviar retinol, keeping it intact and very active.

“Through capturing retinol in caviar, the La Prairie scientists discovered that it needed an oily extraction system and that it performs best in an oily vector – that’s why the nighttime oil is just that.”

The smooth and silky face oil is housed in an ink-black glass vial (in order to shield the caviar retinol from the harmful sunlight) within the luxury brand’s iconic cobalt-blue glass jar. Using the silver pipette, you can warm a few drops of liquid gold between your fingers to start your rejuvenating evening ritual.

For a completely opulent experience, Besant suggests starting your evening skincare routine with Skin Caviar In Essence-In-Lotion (a pre-serum treatment to condition your skin), followed by the Skin Caviar Liquid Lift (to supercharge your results) and the Skin Caviar Luxe Eye Cream before finally massaging in the delicately scented Skin Caviar Nighttime Oil.

“This is a silky, nourishing and comfortable oil,” Besant says. “This is La Prairie’s most iconic collection, with the addition of an oil with caviar retinol – and this is a game-changer”